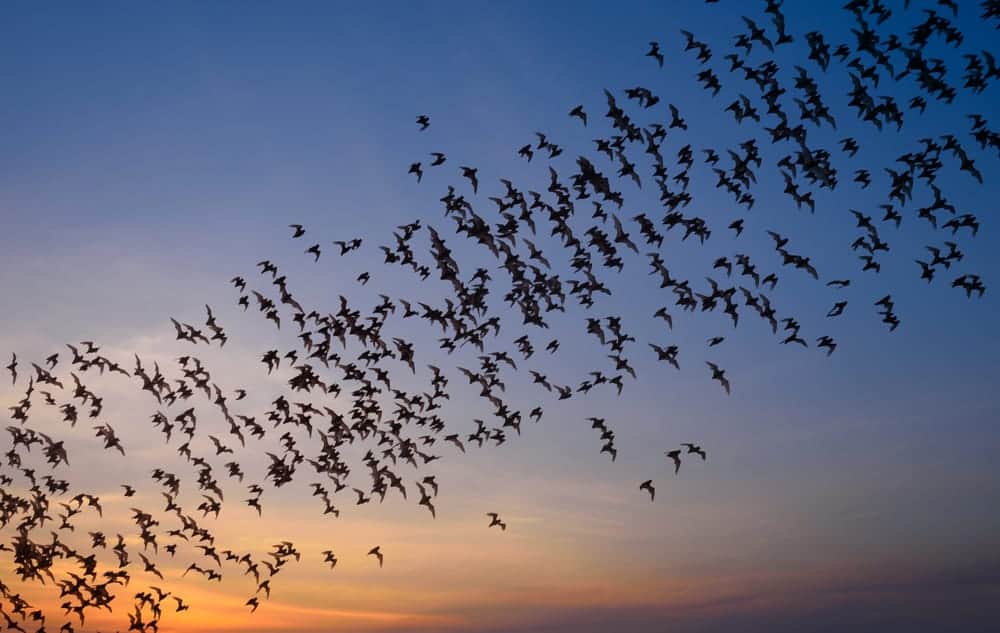 Dreams can be incredibly vivid experiences. And if you’ve had a dream about bats, you’re probably wondering what on earth it meant! The good news is, you’ve come to the right place to find out.

We’re going to look at twelve different meanings that might lie behind your batty dream! We’ll explore the symbolism that your brain might be using. And we’ll check out some tips to get the most accurate interpretation of what your subconscious mind is telling you.

So if you’re ready, step this way to find out what it means when you dream of bats! 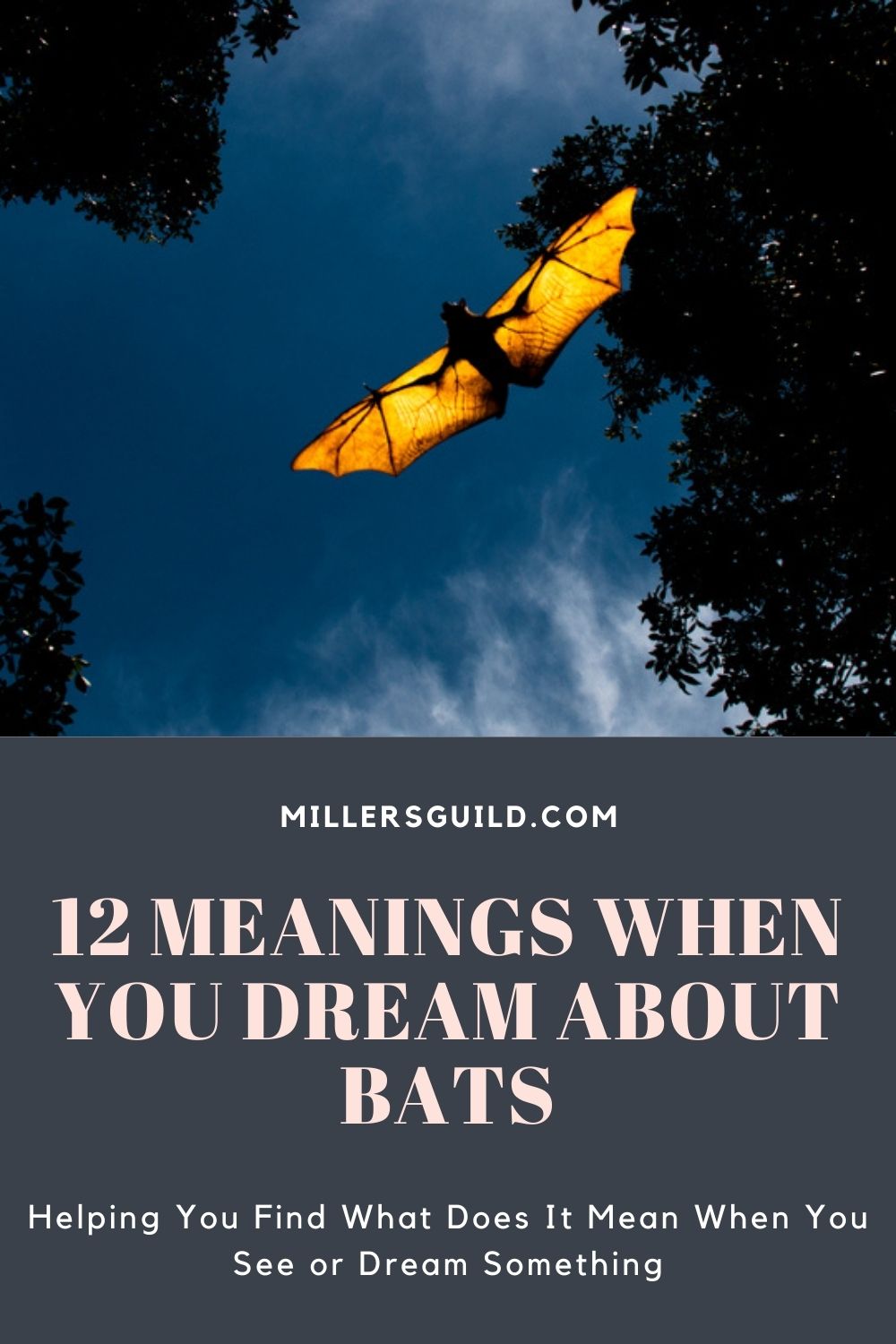 The Symbolism of Bats

When it comes to the interpretation of dreams involving bats, there’s no such thing as one-size-fits-all. Bats carry a wide range of different symbolism. And what the bat signifies for you will depend on your own belief systems and personal experiences.

Traditionally, bats were considered to be dark omens because of their association with the night. Many species of bats are nocturnal, using their keen instincts to seek prey under the cover of darkness.

In some cases, then, dreams about bats can be linked to the idea of some form of external threat. Perhaps you feel yourself to be in the dark. And perhaps the bat is representing an opponent you fear is better able to navigate their environment.

But bats are also strongly associated with intuition. Bats’ ability to use sonar to find their way is an obvious parallel to guidance from our intuitive selves.

They are also known as sociable creatures, living together in large colonies. So some dreams may feature this aspect of their behavior, illuminating how you feel about your own relationships and connections.

Bats are well known as cave dwellers, and caves can also be associated with the womb. So bats in dreams can also signify sleep, unconsciousness (in the period before birth) and the feminine.

But perhaps one of the most well-known associations of bats is with vampires. Lots of stories and films feature a vampire transforming into a bat to enter the room of a sleeping victim!

Even in this case, however, dreaming of a bat doesn’t necessarily portend danger. Instead, it can be the transformation that is the important element of the bat symbolism. Just as the vampire changes into a bat, so you may be experiencing dramatic changes in your own life.

How to Make Sense of the Different Interpretations

With so many different interpretations possible, working out the meaning of your dream can be challenging. But there are some simple steps you can take to guide you in your task.

Using a dreamer’s dictionary can be useful. That will guide you through a range of different scenarios involving bats, and give you options as to what they mean. We’re going to look at some of those scenarios shortly.

But remember – these meanings can only ever be a guide. The most important aspect of dream interpretation is to ask yourself what the bat in your dream signified to you.

Word association can be very helpful here. Ask yourself what a bat represents to you, and write down all the words that spring to mind. Don’t think about it too hard – you’re looking for the connections your brain automatically makes.

When you’ve got your list of words, you may find they point to something else you could describe in the same way. And that something may well be a person or set of circumstances that’s occupying your thoughts at the moment.

Consider too the way you felt in your dream. Were you frightened of the bat, or did you think it was cute? Was it a threat, or trying to help you? Or perhaps it was ignoring you completely? All these emotions are clues to whether you’re on the right track in your interpretation.

Last but not least, consider any other elements of your dream that stood out. Repeat the word association technique with other objects or people you’ve dreamed about. That will help you gain a richer sense of your dream’s meaning.

Now let’s take a look at some different dream scenarios involving bats, and see what they might be telling you.

We tend to think of bats as being black, although they can also be brown or even orange. If you didn’t particularly notice the color of the bat in your dream, this won’t be significant. But if the fact that it was black was very obvious to your dreaming self, it’s worth considering why.

Black is often associated with things that are hidden, death and mourning.

2. Being Attacked by a Bat

If your dream involved being attacked by a bat, it could signify a challenge confronting you in your waking life.

The nature of the bat attack could be important to its meaning. Did the bat swoop down on you from a great height? If so, it might reflect your anxiety about the risk presented by someone in a position of authority. The bat may represent someone who is metaphorically “above” you.

If you were bitten by the bat, it may signify that something will be brought to your attention. Here the bat could be representing someone close to you who will alert you to new information.

And if you see the bat attacking someone else, some people believe that it has a very specific meaning. You may find that the work task you’re dreading is actually about to be handed to someone else! 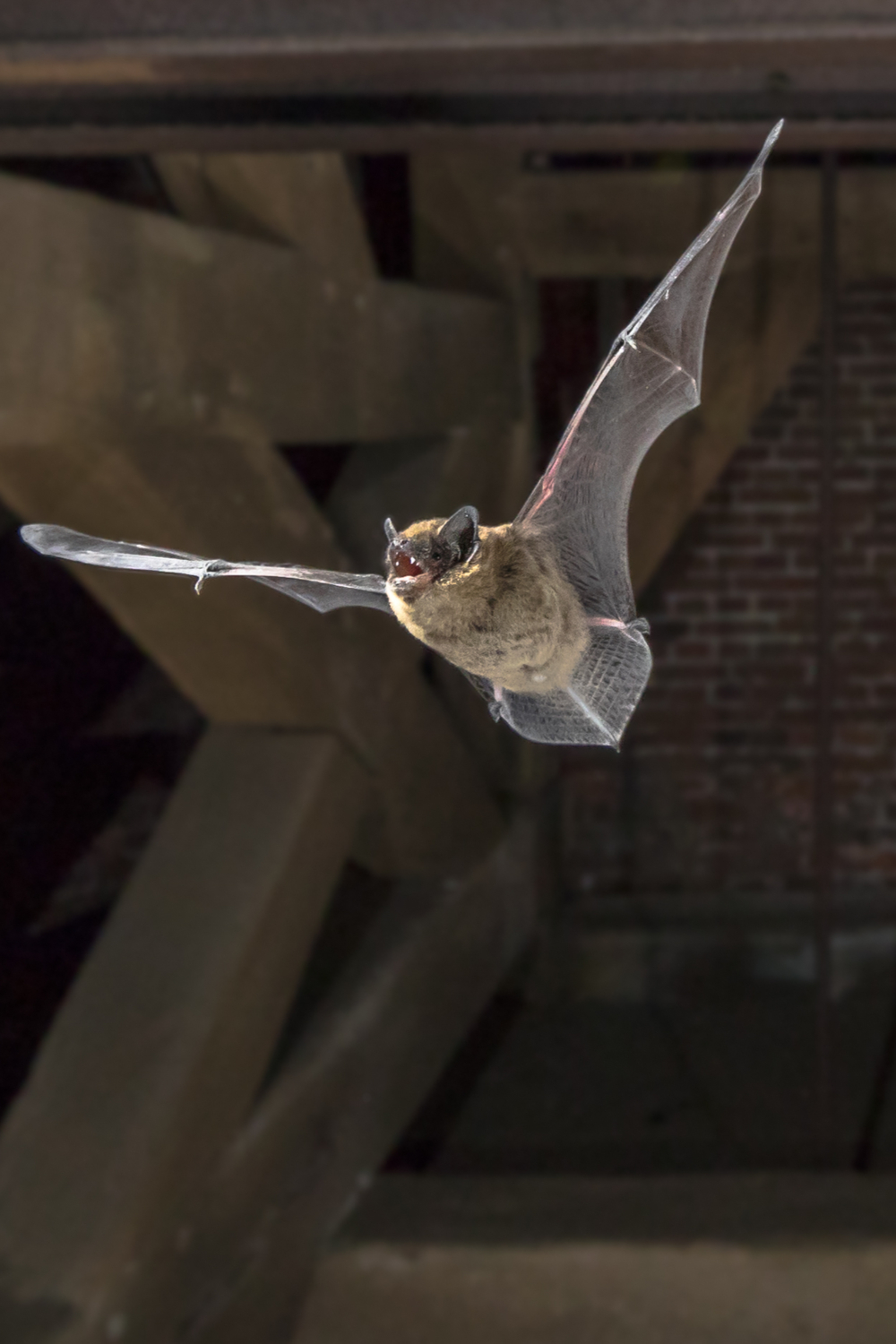 Bats move by flight, so the fact that the bat in your dream was flying might not be important. But if the flight was the most noticeable aspect of the bat’s behavior, pay attention! It will form part of the meaning of your dream.

Was the bat flying towards you or away from you? If it was approaching, your mind is telling you that whatever the bat represents is coming your way. That might mean you’ll soon be getting news, or that there’ll be a development in your work or personal life.

If the bat was flying away from you, it could represent something that’s now passed by. Pay attention to how you feel. Are you relieved or disappointed?

And if the bat was flying erratically, it might relate to your own feelings. Perhaps you’re worried that you’re “off course”, or that you’re not listening to your own instincts.

4. Bats in Your Home

Dreams about our home frequently relate to our feelings about ourselves and our sense of security.

It might be that the bat represents something that is disturbing your inner equilibrium. Or it might signify something or someone that is affecting your enjoyment of your home. Perhaps a family member is making life difficult. Or maybe a guest is in danger of outstaying their welcome.

Whatever the cause, this dream could be prompting you to take action to restore your sense of calm.

The size of the bat in your dream is likely to be providing extra information about whatever it represents. So if the bat is highlighting a hidden secret, for example, a large bat means the secret is a big one.

Begin by interpreting the other aspects of your dream. The size of the bat will then give you a clue as to how important the events it’s signifying will be. 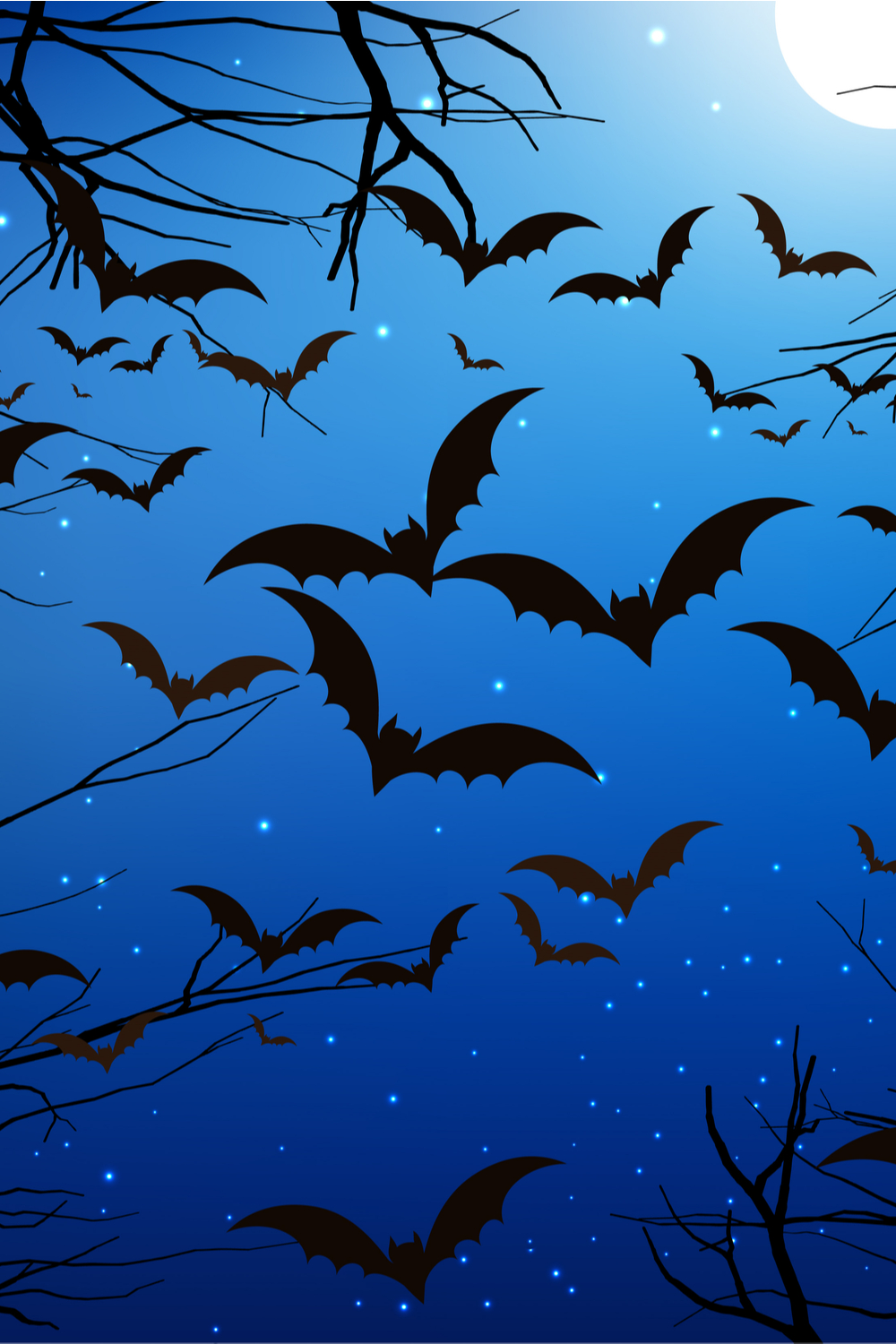 If there was a swarm of bats in your dream, it may relate to feelings of being overwhelmed. That’s particularly likely to be the case if the bats were flying in different directions at once. That’s a strong visual representation of chaos and confusion.

If this strikes a chord with you, your dream may be encouraging you to take a step back from everyday problems. Try to find space to think calmly about your situation and assess how you want to respond. Maybe you need to find a way to tackle your problems one “bat” at a time.

A bat that appears friendly, calm or otherwise personable in your dream is a good sign. It could suggest that you’re managing to find a way to deal effectively with other people’s toxic behavior. As a result, you’re able to remain positive in an environment that others may find difficult.

It can also be a sign that you’re moving out of your comfort zone, embracing what is new and unfamiliar.

If the bat in your dream went so far as to talk to you, listen to what it said. Most messages conveyed in dreams come directly from your subconscious mind. It could be that the bat is highlighting observations you’ve made but haven’t consciously registered.

Dreams of bats eating are seen by some as positive omens. They are held to represent someone close to you being nurtured. And in most cases, the dreamer is the one who’s responsible for the good deed.

Has a friend, colleague or family member asked for your advice or help? If so, this dream could be encouraging you to offer your support. It’s showing you the satisfaction of providing spiritual nourishment to those around you.

For bats, hanging upside down is their natural state. And in this case, it’s that position which your dream may be prompting you to take yourself. In other words, this could be a dream about taking a new perspective on a situation.

Have you been struggling to find a way through a problem? The bat could be representing the value of looking at things in a different way. 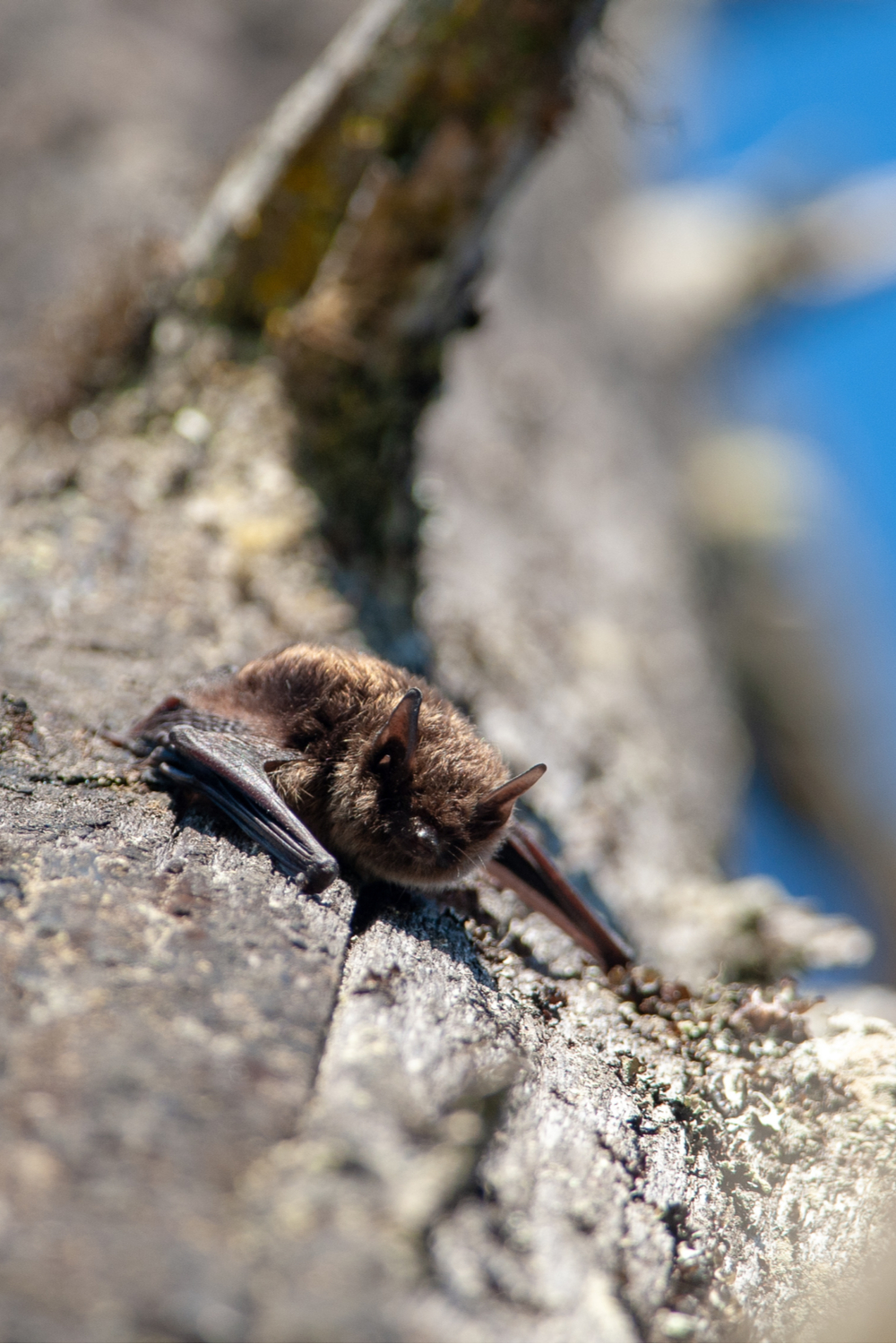 As we’ve seen, bats in your dream can represent different people, emotions or circumstances. Killing the bat in your dream usually represents your successful efforts to overcome whatever it symbolizes.

As such, this is usually a positive dream, reflecting your own sense of personal power.

But it can also indicate that you are causing pain. If your subconscious brain feels you’ve been rude, unkind or thoughtless, it could be reflecting that through this dream.

One key feature distinguishes the popular image of the vampire bat from other bat species. That’s its appetite for drinking blood.

In reality, vampire bats drink small amounts of blood from cattle. But most dreams of this kind feature the bat as a threat to the dreamer.

If that’s the case in your dream, it’s likely that the bat represents something you see as draining your energy. Perhaps that’s a person. Or perhaps it’s a job, or even a new hobby that you worry is taking too much out of you.

Your dream is highlighting these worries so your rational mind can examine them and decide whether to make a change.

Some people report dreams of seeing or hearing the wings of bats, rather than the animal itself. So what might that mean?

The sound of rushing wings can represent the need to move quickly. Bats’ wings are also incredibly agile, so this dream could be reflecting a need to be nimble.

If you dream that you have bat wings yourself, it could signify your own spiritual growth. Perhaps you’re finding ways to metaphorically rise above your problems. And it could be a sign that listening to your intuition will be key to achieving this.

Batty Dreams Can Have a Multitude of Meanings

We hope you’ve enjoyed our tour of what it can mean when you dream of bats. With so many different possible interpretations, it’s important to take your time working out the message.

Pay attention to all the details of your dream. And check in with yourself about whether the meaning you’ve deciphered rings true.

Remember – dreams are a product of our own minds. That means that when you’ve hit on the right interpretation, you’ll know. And you’ll get the satisfaction of having decoded the message from your subconscious brain. 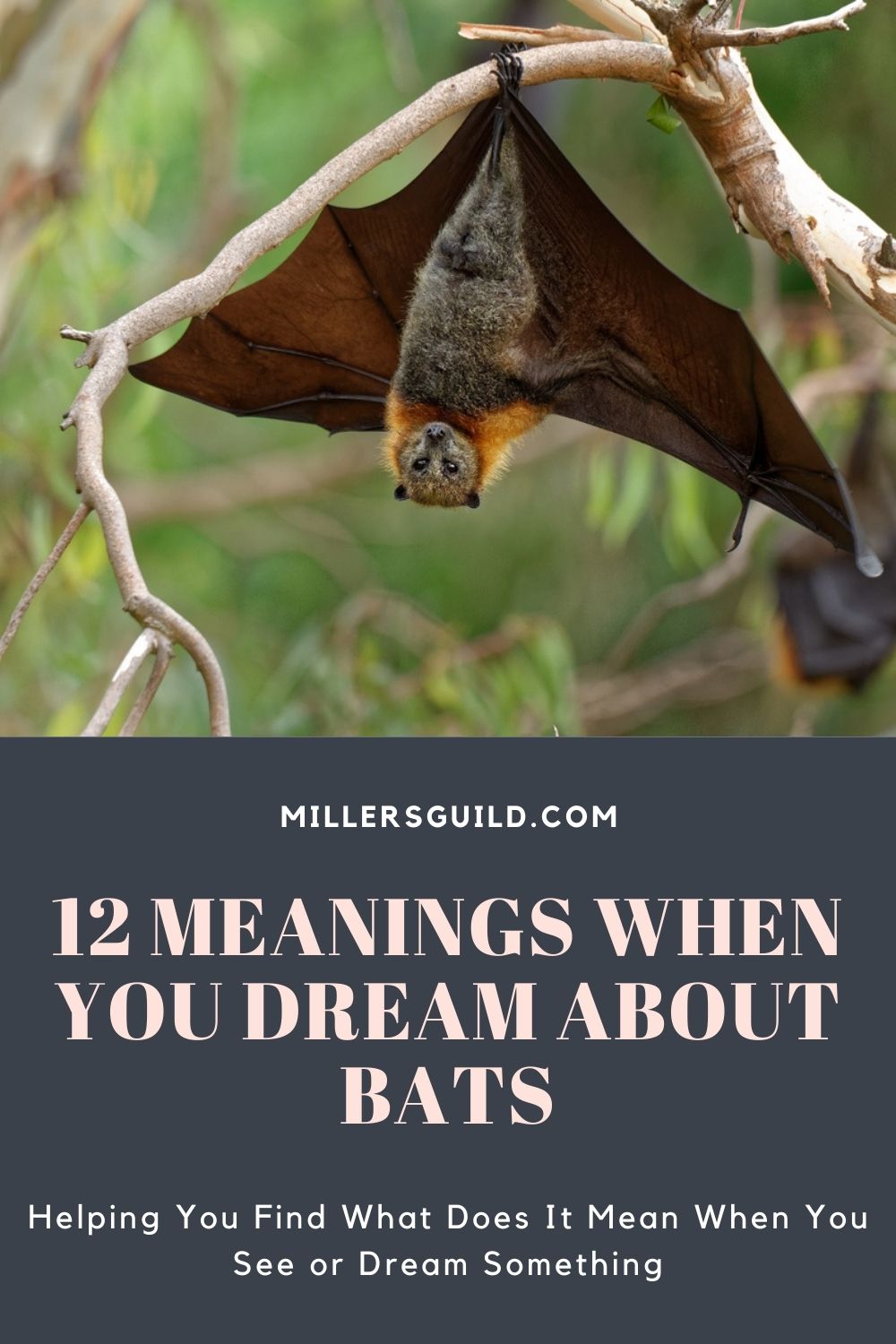 7 thoughts on “12 Meanings When You Dream About Bats”