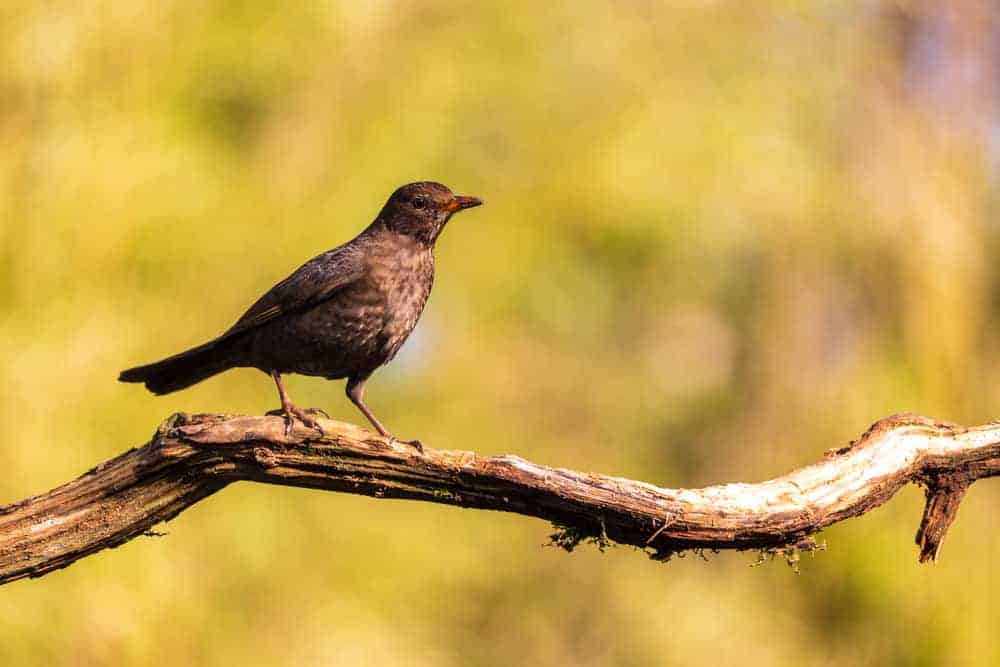 Blackbirds native to Europe, Asia, and North America symbolisms bring a lot of positive energy to your life. There is more to them than a dark color on their body surface; they symbolize intuition, seriousness, intelligence, protection, adaptability, and to some, a bad omen.

So, if you feel that your spirit animal or a totem is a blackbird, you definitely might be in search of a more deep understanding of these birds. In this post, we’ll discuss what blackbirds symbolize, their totem, omens, and even some common blackbird dream interpretations. Let’s get started! 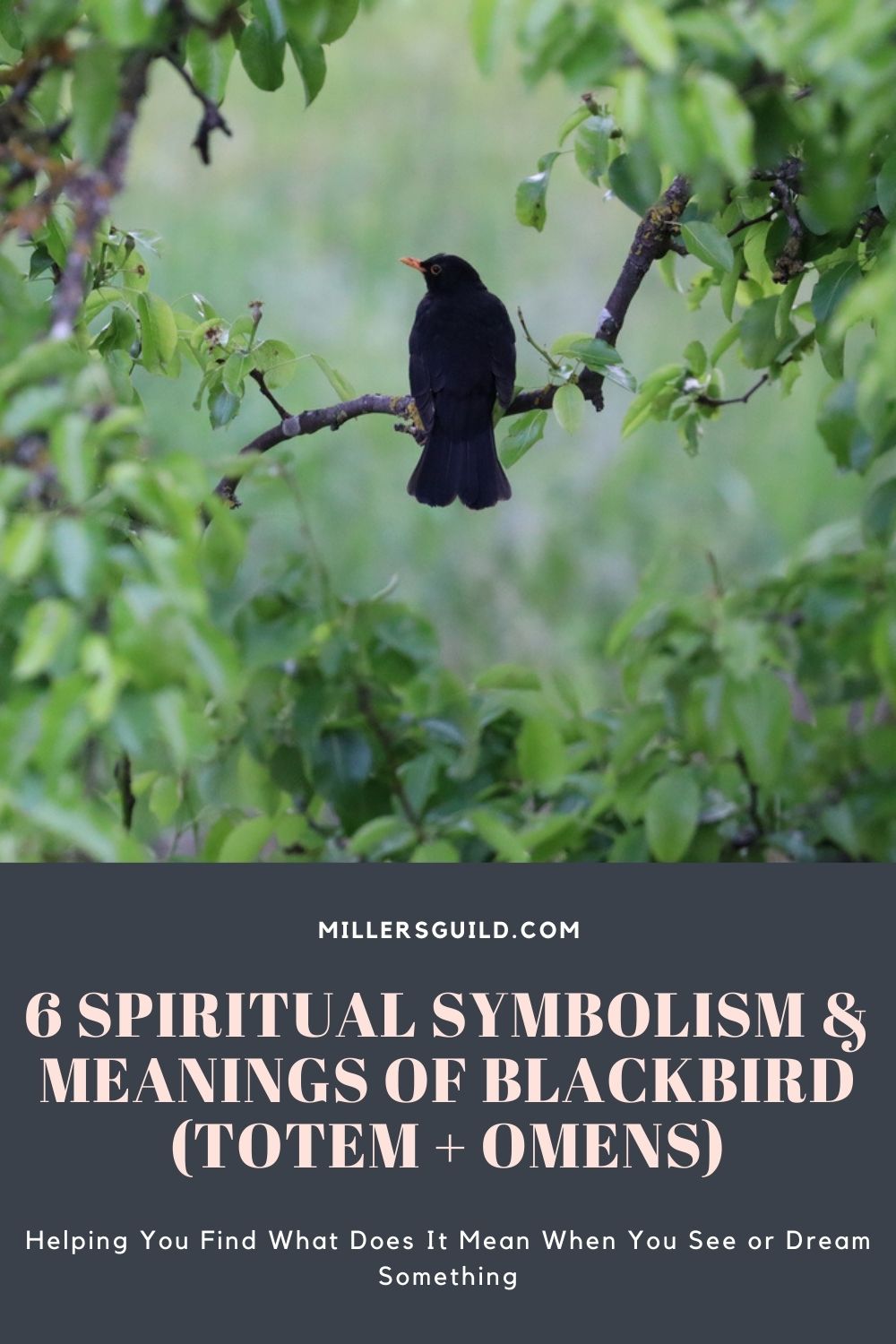 What Do Blackbirds Symbolize?

As we’ve mentioned above, blackbirds symbolize a lot of traits and emotions. In this section, we’ll dive deep into each of its symbolism and try to grasp a better understanding of them. Let’s begin!

In some cultures, blackbirds are considered a bad juju. They are associated with the Otherworld and even believed to bring the message of death.

Black, as color alone, is associated with magic and mystery, especially witches. So, this symbolism of darkness is partly due to the black wings blackbirds possess.

Blackbirds are also a great symbol of intuition. They guide you to hear your inner voice and seek the answers within you. You’ll know the right answers to many questions people are unaware of.

Those under a blackbird totem trust their guts and are highly understanding as well, given their ability to sense and understand where others’ words and actions are coming from.

They can perceive their surroundings and the people around them deeply, which gives them a sense of clarity, which minimizes the hurdles coming their way.

Blackbirds often seem older than they truly are. They possess seriousness and authority in their looks that many find enigmatic and formidable.

Those under the blackbird totem also share similar personality traits. They carry serious looks that often come with old age and give fabulous advice, which many find helpful. They are influential and are able to persuade people to stand up for good causes.

Besides their magical and strikingly stunning look, with a dark body and eye-catching yellow beak and eye rims, blackbirds also possess equally impressive brains – very intelligent and quick-witted. These are not some mere birds; they symbolize knowledge and all-knowing ability.

Even scientists find these creatures amazing. They have special songs and demeanor of behaving in nature. So, people born under the blackbird totem are considered to be smart, knowledgeable, and quick-witted.

Not only animals, but some birds like blackbirds also tend to be territorial. They often live in pairs, an adult male and an adult female, and fiercely protect each other and their territory from uninvited predators or other forces.

Though cute, they are aggressive when it comes to defending what’s their own. So, a blackbird symbolizes protection and reminds us to treasure everything we possess, including our social as well as romantic relationships.

Blackbirds are very adaptive to varying situations. They eat what they get and aren’t too choosy about their diets. While blackbirds aren’t choosy, many humans are!

So, blackbirds remind us to make work of any situation we have in hand. To produce results by putting in our 100% and not to waste time complaining about the hurdles and circumstances you had to go through; that’s what blackbirds symbolize – adaptability.

Fortune tellers of a few Native American tribes used blackbird feathers and eggs for the process. Other tribes, such as the Cherokee and the Hokee, considered blackbird power animals as a symbol to connect to ownself on a deeper level and also as connectors to the underworld.

Some other tribes, natives to Mandans and Arikara, considered blackbirds to serve the guardians of the corn. They used the blackbird’s actions towards the corn as an indication of how they were managing their lands and crops and if they were paying enough dues to the rightful spirits.

While ancient Celt doesn’t speak a lot of blackbirds, they group these birds together with other dark-colored birds such as ravens and crows.

They associated them with the underworld and spirits, considered them to have the prophetic ability, and often were also symbolized as the messenger to and from the divine.

In the tale of Rhiannon, the Celtic queen goddess believed blackbirds could understand the nature of history and time. She had three sacred birds herself, who could bring back the dead by singing melodious songs, and at the same time, had the ability to send people to the grave.

Blackbirds are optimistic creatures. This optimism and intelligence help those with blackbirds totem to be great leaders; they have plenty of energy and optimism to implement ideas.

They’re also great at reading, we don’t know about books, but they sure read people well. Sometimes, they understand people around them much deeper than they themselves could ever.

If you have a blackbird totem animal, you are curious, adventurous, and someone who loves to portray themselves as mysterious being to others. Though you have the ability to gain friends and followers, you often tend to avoid social settings beyond your close circle.

To start with, if you have a blackbird spirit animal, you’re smart. The blackbird not only teaches you about the external environment and things but also helps you know more about yourself and your inner voice.

You’re fiercely protective of what’s yours, including your friends and family. Even if there’s a big change going on in your personal or professional life, blackbirds help you adapt and go with the flow.

You’re able to make do of any situation and don’t believe in blaming the situation culprit for one’s inability to complete a task. You’re also intuitive, and all these traits combined will significantly reduce the numbers of troubles you go through in your life.

Those with blackbird spirit animals are shy and tend to put a defensive wall in front of them whenever they are in a social setting. They act elusive with people they don’t know closely enough.

Likewise, all the seriousness and intelligence will sometimes weigh you down, and you might forget to have fun at times. Give yourself a break every now and then, and have fun, play, laugh, and just maintain a healthy lust for life.

When To Summon Your Blackbird Spirit Animal?

If your concentrating ability is not your best friend at the moment and you want to put more focus on your tasks and relationships, calling on your blackbird spirit animal will be extremely helpful.

Likewise, if you’re having a hard time making decisions, blackbirds can help you figure out what is good for you and what isn’t, improving your decision-making abilities overall. Similarly, if you’re seeking answers from within, calling on blackbirds will help you do so.

If you’re undergoing big changes in your life, which you’re finding difficult to adapt to, summoning your blackbird spirit animal will definitely help make the process easier.

Blackbirds are considered to be messengers of spirit. So, when you see a dead bird, it means that a symbolic death is imminent in your life. However, there’s nothing to worry about as this death omen can be a good one.

It can represent bad financial circumstances or a toxic relationship ending, releasing you of long-overdue burdens.

Likewise, it’s possible for you to encounter blackbirds when you’re in dire need of answers or you’re not feeling your best self at the moment, i.e., full of self-doubt and low self-esteem.

Seeing blackbirds at such times in your life is a reminder that you must look deep into yourself, where you’ll find answers to all your question. It is an indication that your instincts are powerful, and you have answers within you that many people aren’t aware of.

Blackbirds are also harbingers of change. It would be best for you not to resist these changes and embrace them instead, as it can prove to be very beneficial to your growth.

Common Dreams About Blackbirds and Their Interpretations

Have you been dreaming a lot of blackbirds lately? Well, if yes, the interpretation varies depending upon the dream setting. Let’s look at some common blackbird dreams and their interpretations, shall we?

1. Dreaming of buying a blackbird in a cage:

There’s a common saying – sometimes, loving someone is all about letting them go. When the situation demands, or when the person doesn’t want you in their life any longer, it’s obviously the right thing to do.

If you’re dreaming of buying a blackbird in a cage, it means that you’re not quite a believer in this saying. It means that you’re trying too hard to make someone stay in your life despite it being evident that the other person doesn’t feel the same.

Seeing this dream is an indication that you must realize that’s a selfish way of loving someone, and in fact, it’s not love at all.

2. Dreaming of catching a blackbird:

Dreaming of catching a blackbird means that you’re a pragmatic person. You believe in working hard towards your goals in order to achieve them and find daydreaming ridiculous. Your philosophy is that none but oneself is responsible for one’s happiness and future.

3. Dreaming of killing a blackbird: 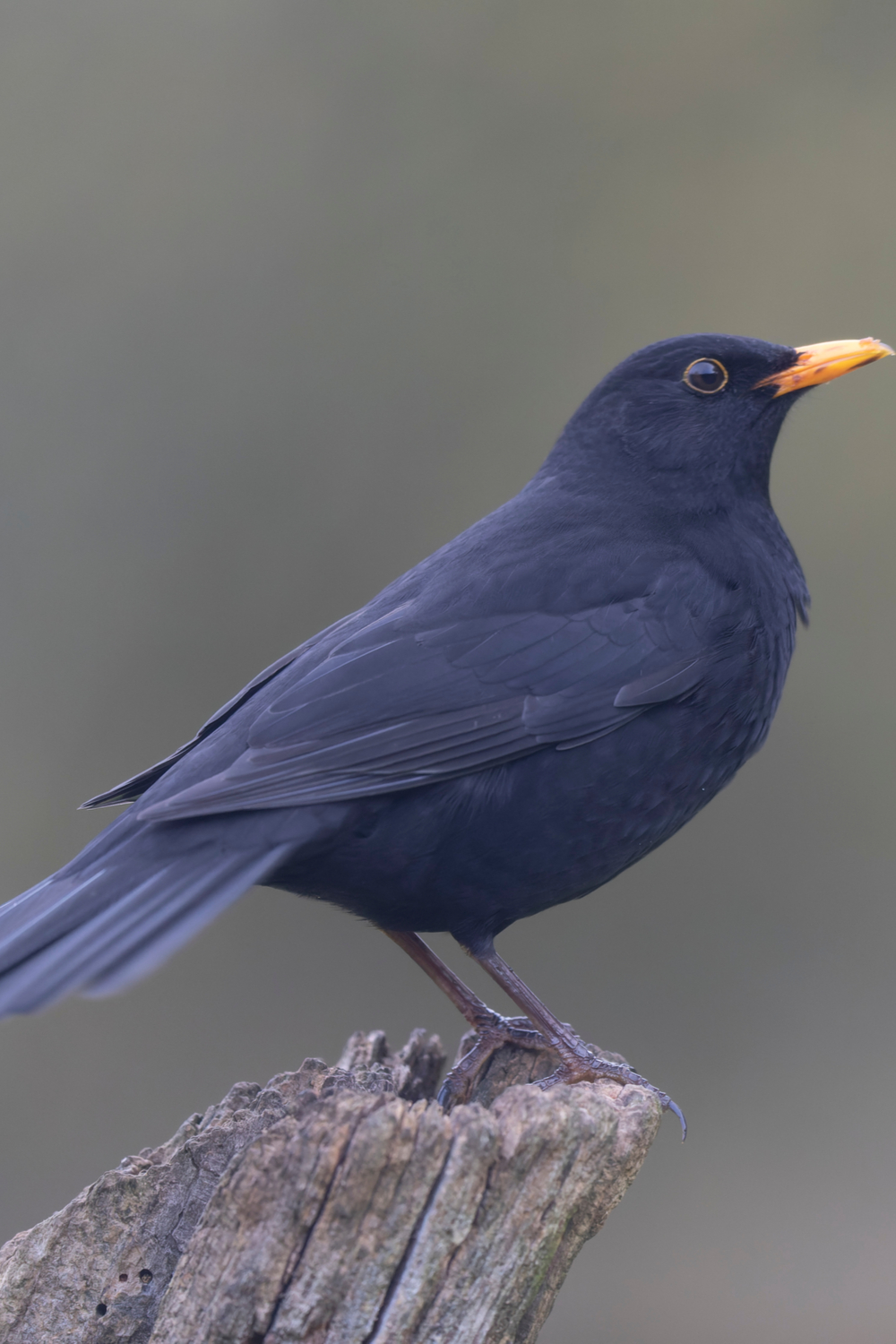 Blackbirds in this type of dream symbolize misfortune. But luckily, killing them indicates that you’ll successfully chase problems away from your and your loved one’s life. There’s a high chance that you’ll get help from someone dependable.

It means that you’ll make the right decisions to keep your family away from harm’s way. Doing so will end up strengthening your relationships with your family, friends, or partner, and there will be more positivity and lesser conflicts in the air around.

4. Dreaming of a flock of blackbirds:

A flock of blackbirds in the dream is a sign of a major change in your life. It may be something personal or professional. However, you must ensure that you embrace the changes fully, as they can bring a lot of positivity and joy to your life.

You might have some issues with adapting to the new scenario. However, blackbirds in the dream are trying to tell you that the transition will be easy if you try your best and trust the process.

5. Dreaming of a blackbird on your window:

This dream, however, is not a good omen. It means that the blackbird is carrying a message of negative feelings, such as fear, misery, and sorrow. You might soon face a downfall in your life, which can take a toll on you and can be difficult to cope up with.

Nevertheless, you must tackle the problem with strength and perseverance. You shouldn’t give up and keep going, as there’ll always be a bright light in front of long dark, terrifying tunnels.

6. Dreaming of selling a blackbird in a cage: 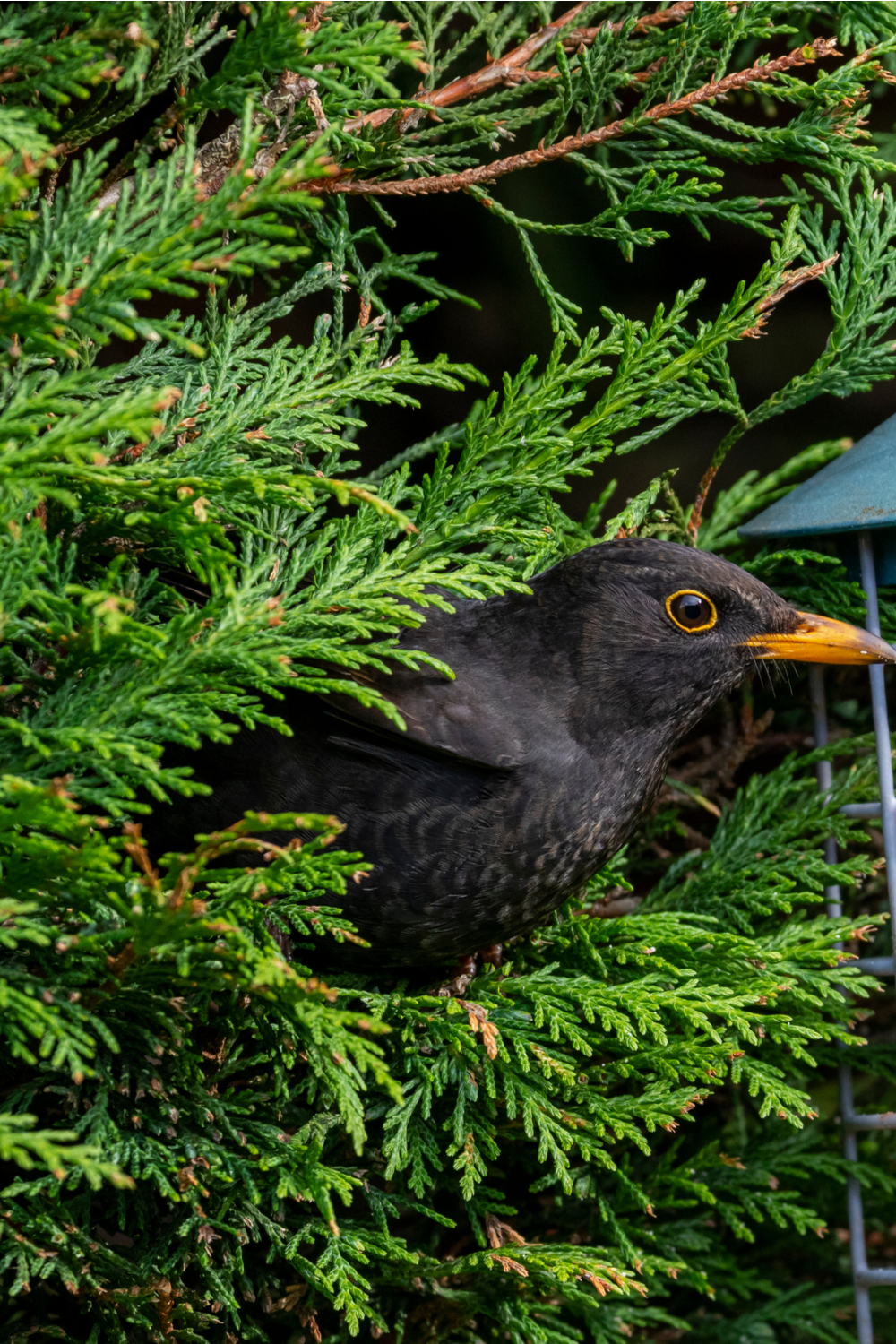 When you dream of selling a blackbird in a cage, be prepared as you might be surrounded by a lot of negativity in your waking life.

Many won’t like your behavior or the actions you took against someone or something. You’ll find yourself being criticized a lot which eventually might get to you, causing you to lose all your self-worth and self-confidence.

However, you’ll soon realize that the decision or the action had to be taken, and there’s nothing for you to feel guilty about.

So, to save you some mental peace, make sure that you turn a deaf ear to such negative criticisms and live your life by your rules, not by others’ guidelines, whenever such a situation arises.

Many associate blackbirds only with darkness, given their black colors. However, we hope we’ve successfully portrayed how great these birds are and how their symbolism can differ depending upon the countries, civilization, and various circumstances in your life.

If your spirit animal is a blackbird, we’d love to know how these birds have guided you in your life. You know where to leave a comment! 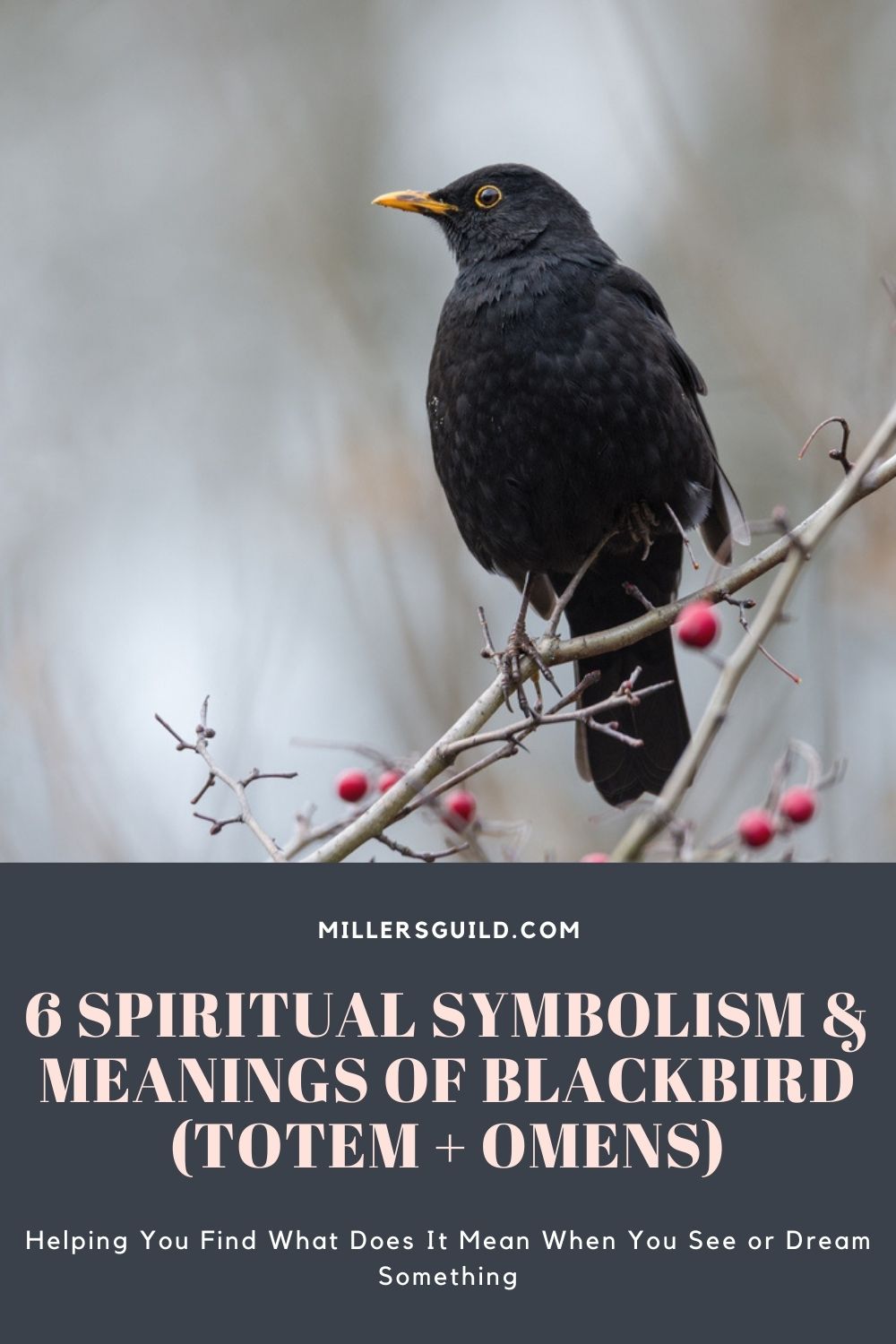