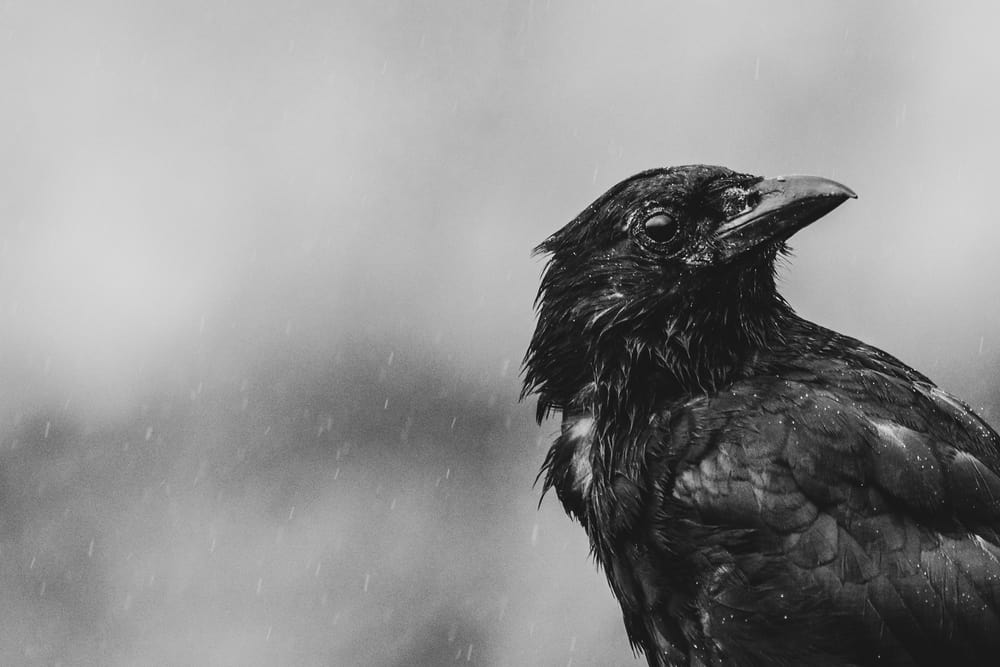 Crows are large, unmistakable birds with an air of menace, and many people around the world associate them with ill tidings, bad luck and death.

However, crows can also have positive connotations, so in this article, we explain the symbolism and signification of these birds as we answer the question, what does it mean when you see a black crow? 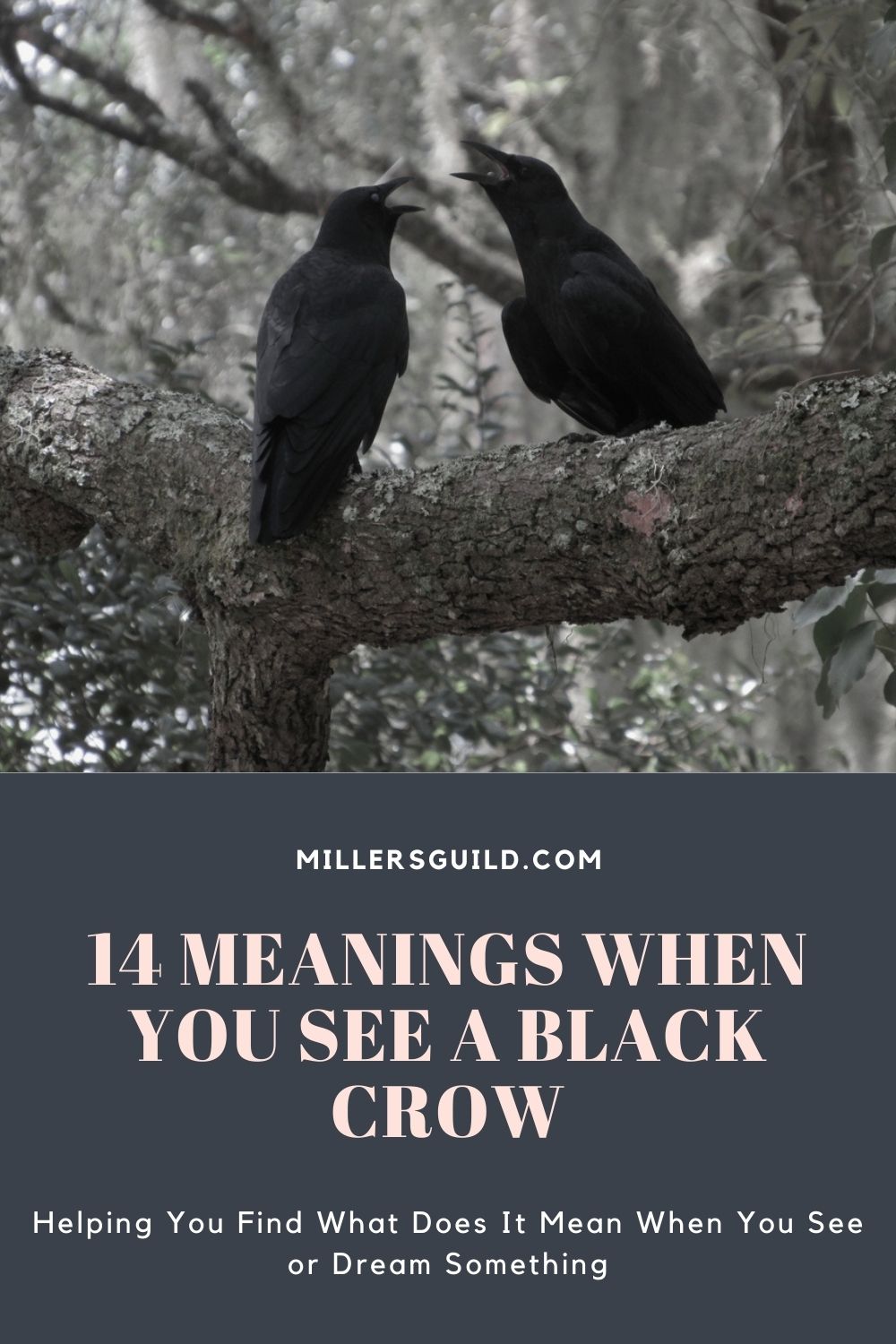 To help us understand the symbolism of these animals and what it means if we see one, let’s start by looking at some of the associations we have with black crows.

Probably among the first things that come to mind when we think of crows is their dark black plumage and their large size.

They can seem scary or intimidating, especially when you see one up close, so it’s no wonder they have come to be associated with dark magic and bad luck.

This unfavorable impression we have of these birds is only reinforced when we see them feeding on carrion. They are commonly encountered pecking on bits of roadkill, and for this reason, people commonly associate them with death.

However, they have other characteristics too. Crows are highly intelligent and are believed to be among the smartest of all birds. This is one of the more positive associations we have with them, as is their sociability, both with other crows and, sometimes, with humans.

They have also sometimes been known to show gratitude to those who have helped them, bringing “gifts” of shiny objects they find, and the fact that they can fly, walk and even swim has been given significance in certain cultural traditions.

Crow symbolism around the world 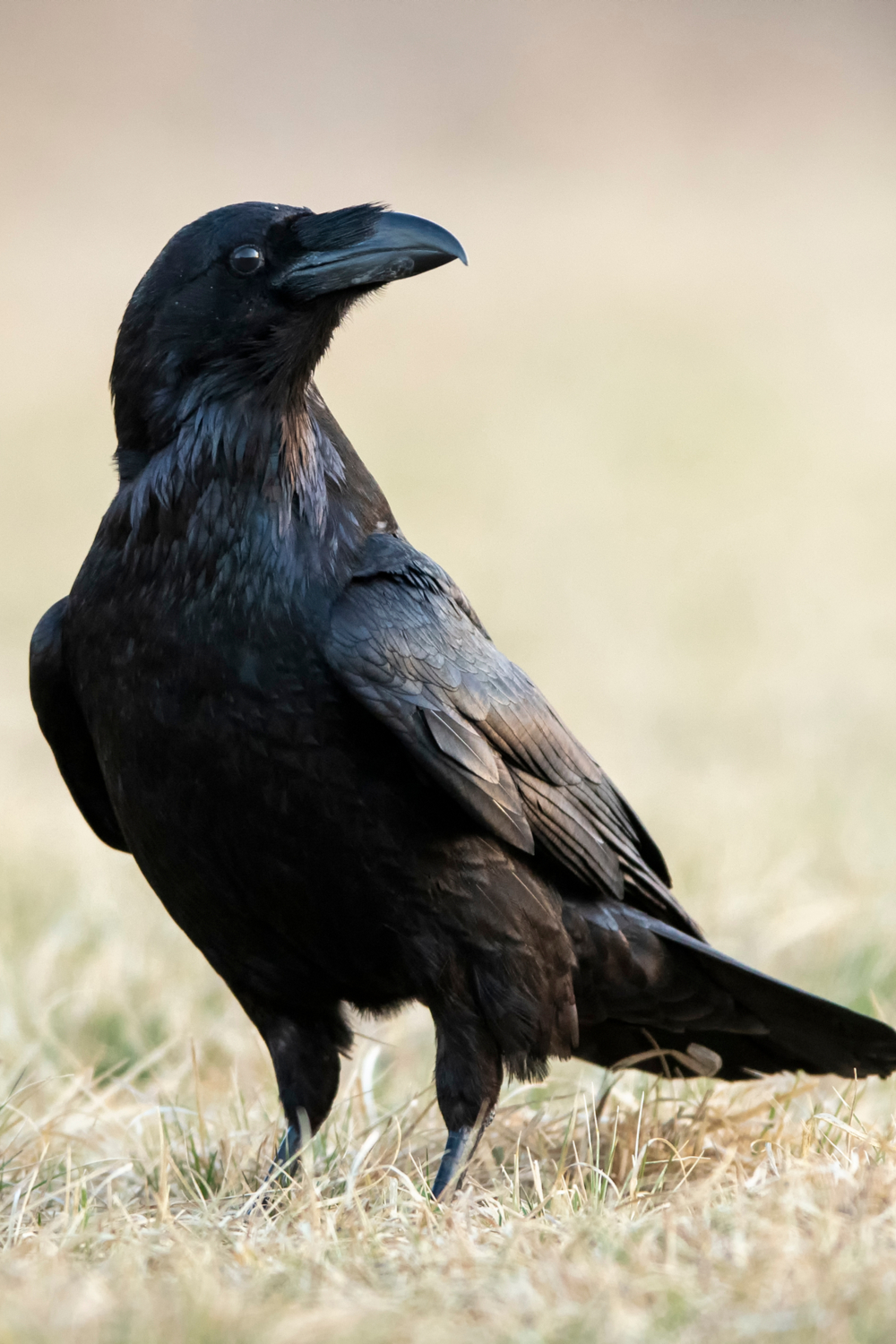 Very little in this world is down to coincidence, and so much of what we see is imbued with meaning and consequence. However, understanding the messages the universe sends us requires us to know the symbolism of what we see.

Crows symbolize different things in different cultures, so now let’s look at how they have been viewed around the world to help us interpret what seeing one can tell us.

To many Native American tribes, the negative aspects of the crow are not emphasized, with people preferring to look at the more positive sides of its nature – for example, its intelligence.

Crows are sometimes seen as messengers bringing tidings to people from the spirit realm. They often announce good fortune in the future, and as such are welcomed. Alternatively, they are seen as being able to cleanse both the mind and the land we live on.

However, to some tribes, the crow character in mythology is seen as a trickster or a shapeshifter, much like the coyote. This is probably due to the fact the crow appears to be just a lowly scavenger, but in reality, is a highly intelligent animal.

The crow is an important feature in Celtic mythology too. It can represent prophecy, but it is also associated with individuality. Crows symbolize our ability to ignore what other people think of us and follow our own path.

They were sometimes seen as messengers sent by prophets or spirits, bringing news and predictions about the future.

According to Welsh tradition, crows were also associated with wizards, who can sometimes transform themselves into these birds to disguise themselves.

A crow or a raven appears in the Bible when Noah sent one off from the Ark to look for land – and it never came back.

what does it mean when you see Black crows? 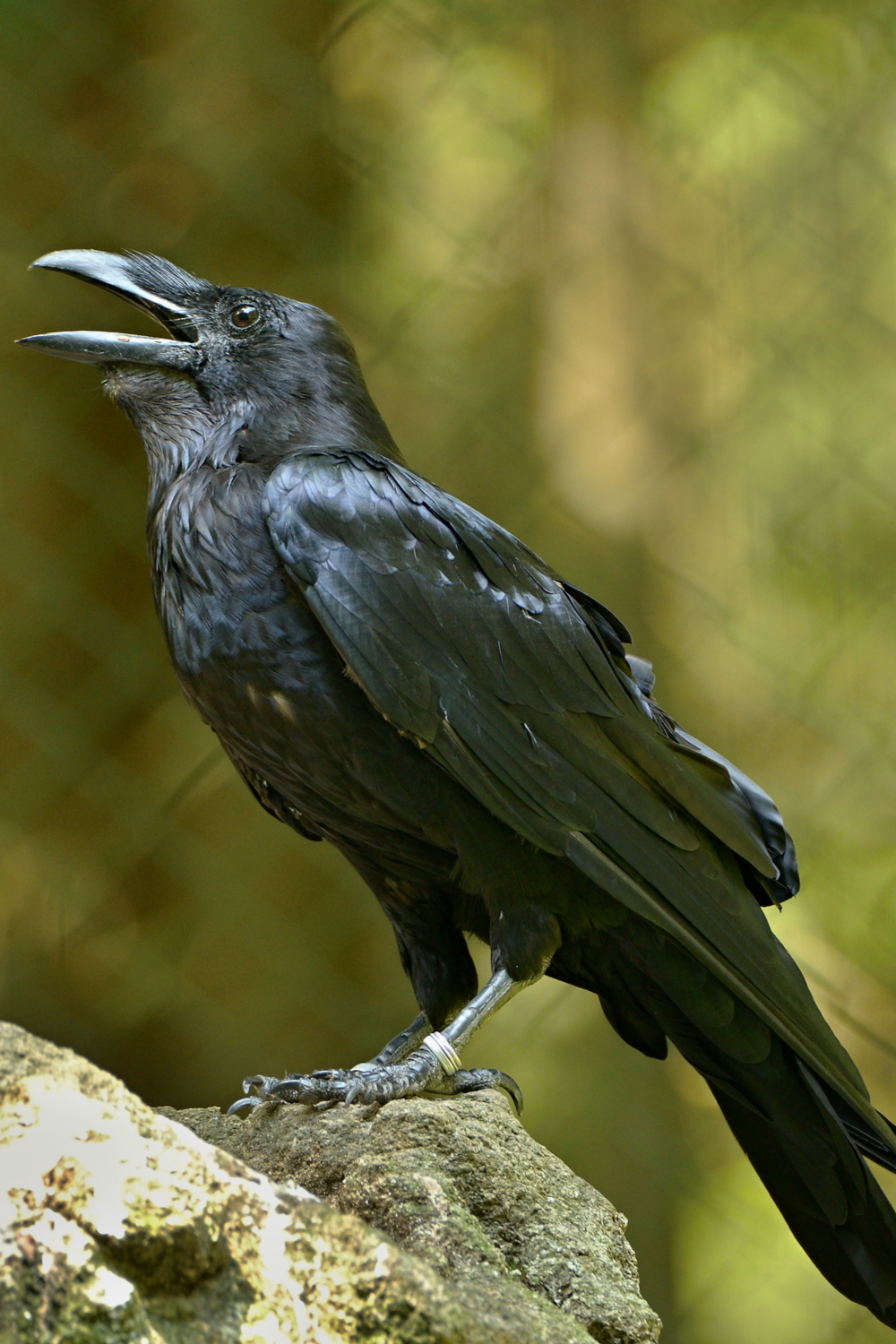 As we mentioned above, there are few coincidences in life, and everything we see can be interpreted as messages trying to tell us something.

They may be messages from guardian angels, from higher universal powers or even from departed loved ones trying to get in touch with us.

However, to understand these messages, we need to be open to receiving them, and we need to learn to search within ourselves and to trust our intuition to find out what the messages mean.

Seeing a crow or crows can have many meanings, so to interpret them, we need to know about the various messages they can convey.

At the same time, we also need to think about the situation in which we see them as well as what is going on in our lives and the challenges we are facing.

Then, by considering all these factors together, we can use our intuition and insight to discover the true meaning of what we’ve seen.

So now let’s look at some of the common meanings seeing a crow can have.

1. A bad omen or a warning of sadness to come

One common meaning of seeing a crow is that it is an omen telling you that something bad is about to happen. Unfortunately, you can’t know just from seeing a crow what bad event will take place, but by remaining perspicacious, you can attenuate the ill effects.

Similarly, seeing a crow may tell you that sadness lies ahead. With messages like these, sometimes you can only interpret seeing the crow with hindsight after the event, but at least you will be able to prepare yourself somewhat for whatever comes next.

As we have seen, due to crows’ association with carrion, they are often connected with death, so seeing one may be a prophecy that someone is going to die. However, in most cases, the death they prophesize is a metaphorical one rather than a literal one.

3. A message of change and new beginnings

More commonly, when you see a crow, the death it is warning you of is not the death of a person. Rather, it is telling you that something is going to end, and with each ending comes a new beginning.

In any case, this message is usually a positive one. Change is universal, and although we are sometimes afraid of change, seeing a crow can remind you that you have nothing to fear and that you should face the future with positivity and confidence.

Having a positive outlook on everything you do is vital and can help you be successful in all you attempt, so seeing a crow when you are about to make a big change in your life should be taken as an encouraging message.

4. A message from the spirit world

Crows have been seen by many cultures as being close to the world of the spirits, so seeing one could be a message from the other side.

Angels use a range of methods to pass messages to us, and seeing a crow could simply be a message that you are not alone. Alternatively, seeing one could be a message from a departed loved one that they are still with you, watching over you..

This is especially common if your loved one only passed on recently since they probably want to get a message to you that all is well and that you should try not to be too sad.

If you are about to start an important undertaking in your life, seeing a crow could be a reminder to proceed with caution – since danger lies ahead.

It doesn’t necessarily mean that you should change course – in fact, quite the opposite. It merely means that if you want everything to turn out as you hoped, you need to be careful how you move forward.

Since crows are deeply connected to the spirit world, they may know more about what’s going on in your subconscious than you do.

For this reason, crows may be a sign that you need to take time to think deeply and reflect to find if there is something troubling you that you are hiding from yourself.

Is there something in your life that you’re unhappy with? Perhaps you aren’t satisfied with your career and you need a change? Or perhaps the person you are with isn’t the true love of your life, but you feel trapped in the relationship?

Could there be an issue like this buried in your subconscious? Search inside yourself, perhaps through meditation, and the answers are sure to be revealed to you.

7. A flying crow – a strong relationship

If you see a flying crow, this may indicate that your relationship is strong.

Flying birds in general can symbolize freedom and independence, which are both important aspects of a healthy relationship.

If you are jealous and always spying on your partner, it means you can’t trust them. But seeing a flying crow means that you feel comfortable enough in your relationship that you can give your partner the space and freedom they need without worrying.

An alternative message could be that you need to give your partner more space and freedom because you are smothering them. If you don’t let them live, your relationship will not be able to develop properly, so you need to learn to trust them more.

By taking the time to be still and consider issues like this and allowing your intuition to guide you, you will be able to find the answers to your questions.

Another meaning of seeing a flying bird is that a celebration is on the horizon. Could it be a wedding? A birth? An anniversary? A birthday? Seeing a crow could be a reminder to celebrate the important things in life because they are unique moments to be savored.

Crows have been known to show gratitude to humans who have befriended them, helped them or fed them. For this reason, the message that seeing a crow carries can be related to gratitude.

Have you helped someone recently or done them a favor? Then seeing a crow could be a message telling you of the deep gratitude they feel.

Another possibility is that perhaps someone has done something for you and that you should be more grateful. It could be that you feel grateful but haven’t shown it enough – so perhaps a gesture of thanks would be appreciated.

If you see two crows together, it is likely to be a sign that you are about to receive some good news. Another similar possibility is that good fortune is on the way soon, so you should count your blessings.

The collective noun for crows is a “murder”, and seeing three crows together could mean that people are plotting against you – although it probably doesn’t mean they’re going to try to kill you!

An old folk belief tells that crows circling overhead means that a large number of people are soon going to die. It is thought that crows would often circle above battlefields before the fighting began, and the belief that crows foretell impending large-scale death persists today.

13. Feasting crows – tells you to keep going as you are

If you see crows feasting, most likely in a dream, it means that you should stick to your current course because you are on the right track.

If you are trying to achieve something but are wavering, this message tells you to stick at it because it will all be worth the effort in the end.

If you see a dead crow, either in real life or in a dream, it can relate to new beginnings. It probably doesn’t have anything to do with a real death – rather, it’s a metaphorical message about something coming to an end and something else beginning.

Many meanings – and not all negative

So as we have seen, seeing a crow can carry many messages, and while they can be the bearers of bad news or foretell death and misfortune, often the meanings can be positive too.

If you see a crow, you should take time to calm your soul and search within yourself. Then, by thinking deeply on what you have seen and trusting your intuition, the meaning of the message will be revealed to you. 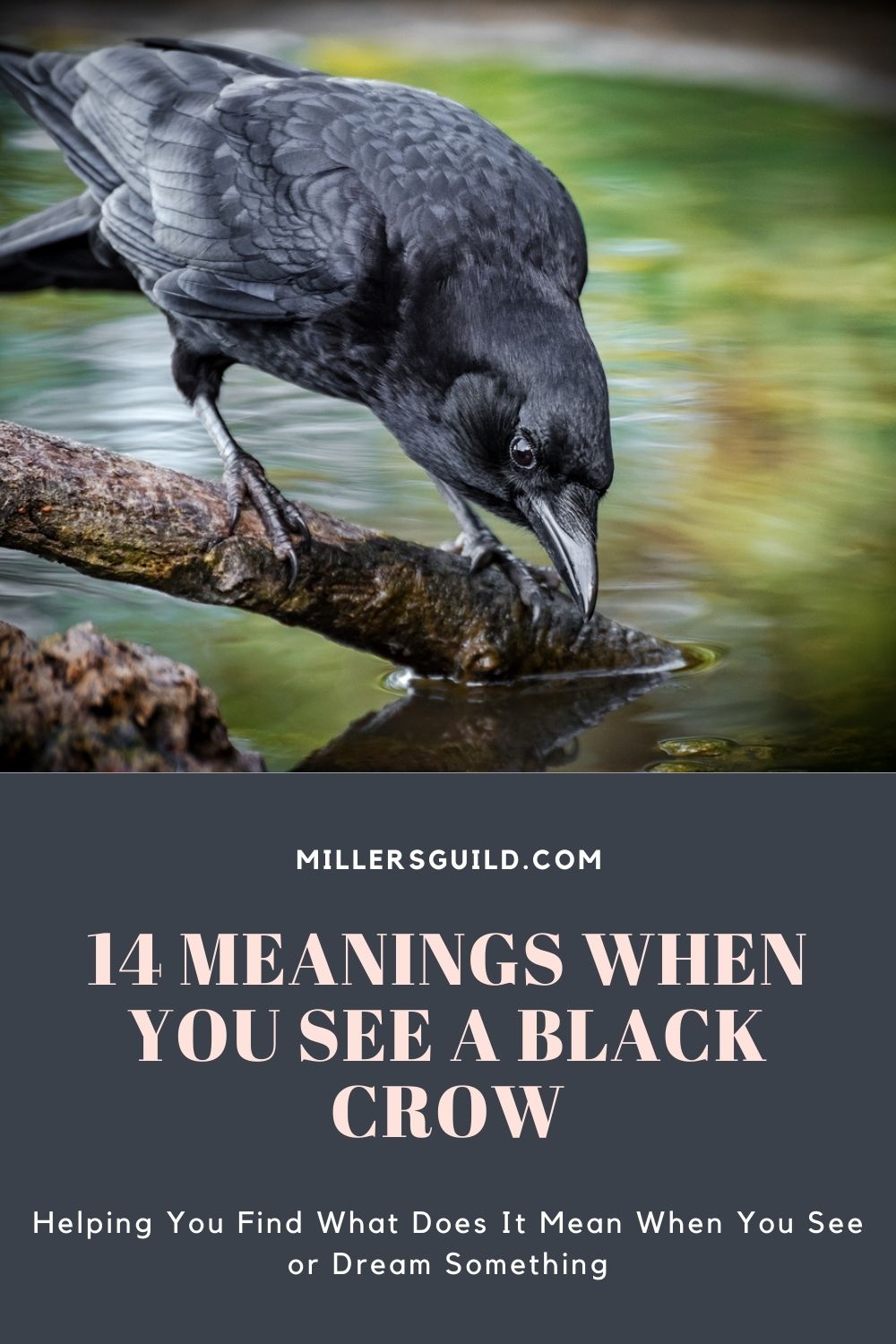 10 thoughts on “14 Meanings When You See a Black Crow”