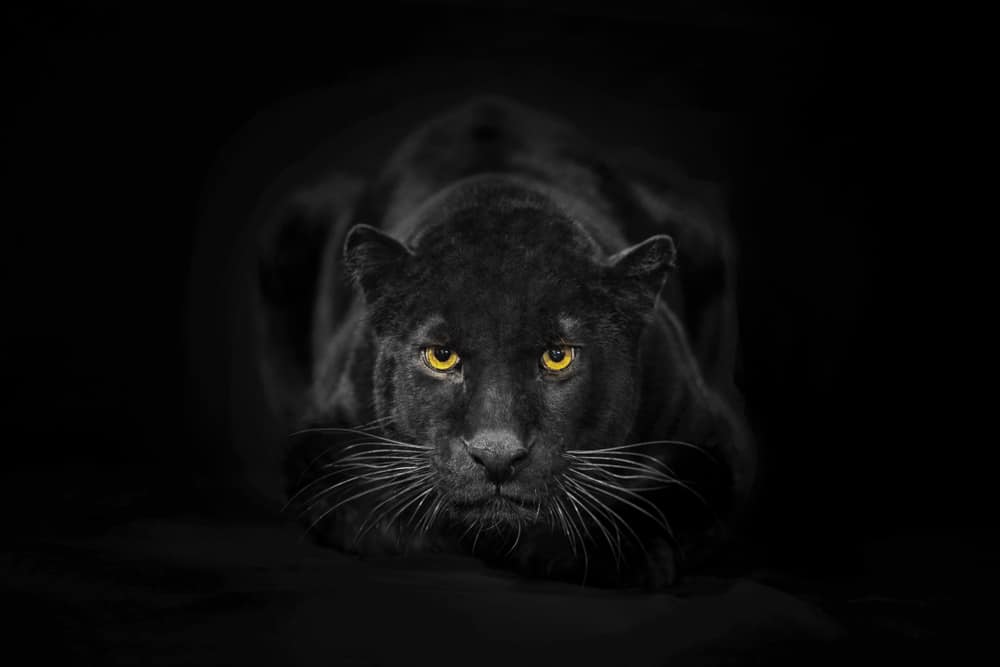 Big feral cats are overwhelmingly powerful when compared to humans. But that’s not the only thing we can learn from them.

For instance, black panthers are also symbolized for their guardianship as they are for their bravery. Read on to find out more on black panther symbolism, totem, spirit, omens, and common panther dreams and what they mean.

Black panthers are impressively powerful and smart animals. They are known for being cunning and displaying great leadership skills.

The Greek word ‘Panther’ means all-beast, and the panthers were symbols of Dionysos, the god of wine, merriment, and theatre, in ancient Greece. In general, black panthers symbolize the following things.

Being almost at the top of the food chain, black panthers are one of the bravest and most powerful animals. So, it is indeed apt that these animals symbolize strength and bravery.

Whereas, in other tribes such as Eastern tribes and Pueblo tribes, these mighty animals are symbolized as protectors and guardians. They further ascribe panthers to have healing and hunting powers.

On the other hand, many other tribes considered panthers to be lucky and associated them with wealth. In South America, Shamans symbolize panthers for their fierceness and energy.

Panthers are considered one of the animal symbols of Christ. Many compare the characteristics of panthers to Christs and conclude that they are similar in many ways, gentle, beautiful, omnipotent, kind, and protective. One is the protector of humankind, whereas the other is considered to protect the animals.

In China, one could see black panthers embroidered into military officials’ robes. Thus, they were seen as a symbol of bravery and courage. Likewise, China is also believed to idolize black panthers as symbols of taming aggressions and clarify all the visions obscured by one’s belligerence in life.

Likewise, in India and Egypt, there are legends and movements that portray panthers as the symbols of guardianship, i.e., protectors of the oppressed and feebles.

Celtic mythology doesn’t discuss much of black panthers. However, folks of certain regions believed in feral-like animals and used to carve out animals to carry with them. Also, Freya, the fertility goddess in Norse mythology, has been portrayed to ride a panther-ridden chariot.

Black panthers were abundant in Africa, and thus, it has successfully penetrated into African mythologies. Leopards and black panthers are considered of great importance in African art. Moreover, panthers are symbolized as royal power in Africa.

People born under the black panther totem are self-reliant and highly intuitive. They don’t rely on others to reach their goals. Rather, they use their own skillset to build themselves from the ground. They often enjoy solitude as not many can keep up with their panther-pace.

Panther totem also helps the person make great decisions and are able to find apt ways for themselves.

Moreover, they are graceful and expressive. They often tend to express their energy through art. So, if you resonate with all these characteristics and just love black panthers dearly, black panthers might be your animal totem.

Panthers are fierce and speedy. So, those who are guided by spirit animals are fast at decision making, skilled, and brave. Black panthers appear as spirit animals to those who choose to chase away their fears and walk in a path of courage and fierceness.

Panther spirit animals indicate craftiness, and people guided by this spirit animal are great at convincing others and getting things done. They’re likely to have successfully embraced their darkness within and around.

While black cats are considered a bad omen in many societies, encountering all cats, including panthers, is considered good in Egypt. In fact, these cats are so honored that even accidentally killing them is considered to forebode mishaps.

Likewise, big cats, including panthers, are considered good omens in African jungles. To be precise, these cats are considered to be the omen of victory.

Sometimes, seeing a black panther might indicate that you need to introspect and embrace all your weaknesses and darkness within. Such an encounter provides you with the necessary power to get past such fears and weaknesses.

Also, panthers are symbolized for their fierceness and independence. So, seeing a blank panther might be a signal that you need to be more independent and tackle your troubles heads on instead of running away from them.

When to Summon the Panther Spirit Animal

Likewise, if you’re often failing to fulfil what is expected of you, all your tasks are going unaccomplished, or if you just feel tired all the time, you should summon the spirit animal.

If you’re planning on getting a black panther tattoo, well, congratulations! This tattoo represents your strength and symbolizes cunningness, bravery, and guardianship. However, what the tattoo symbolizes exactly depends on where you are in the world and the tattoo design.

Dreaming About A Black Panther 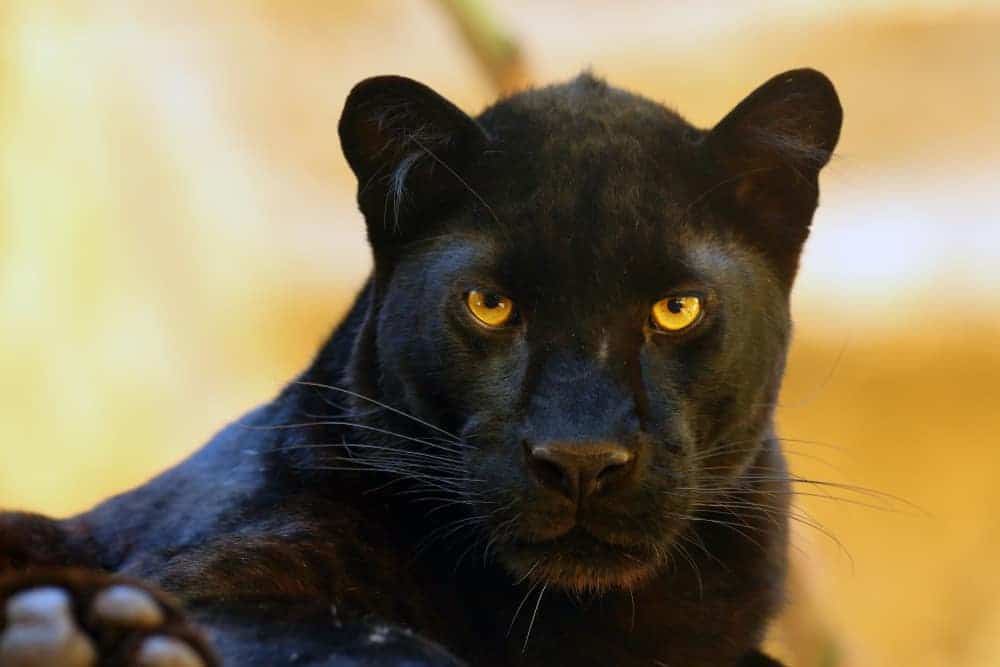 1. Be wary of your steps

Black panthers are known to be calculative predators. They observe their surroundings carefully before moving.

So, seeing a black panther in your dream might indicate that it’s time you ensure that no one around you has hostile intentions towards you. However, rather than panicking, you need to take cautious steps and smart decisions.

Black panthers are high up in the food chain. So, they are fearless and courageous by nature. If you see a black panther in your dream, it might signify that you’re at a weak point in your life, and it’s time to muster up some courage and get back into the game.

Thus, dreaming of a black panther might be a subconscious reminder to stand up for what’s wrong, get ready to face whatever life throws at you, and be determined to chase your dream.

3. Someone’s got your back

Animals are mostly territorial and protective of their loved ones. Black panthers are no different. If you’re feeling lonely and insecure about not having someone to look after you, and you dream of a black panther, it might be an indication for you to worry less as some guardian angel of your life is looking over you.

Dreaming of a black panther when you’re in a low self-esteem phase of your life might be a sign that it’s time to build of your confidence and not care about what others have to say about you.

Black panthers are a symbol of femininity and grace. And see such an animal in your dream in an indication that you must embrace the beauty within you and feel pretty and confident.

If you’re suffering a lot of pain and hardships in your life, you’ll likely get over the hurdles soon if you’ve dreamt of a black panther lately.

Black panthers often symbolize death and rebirth, meaning your troubled days will be long gone, and you’ll bounce back as a stronger and powerful being.

Panther Dream Interpretations Depending Upon Contexts 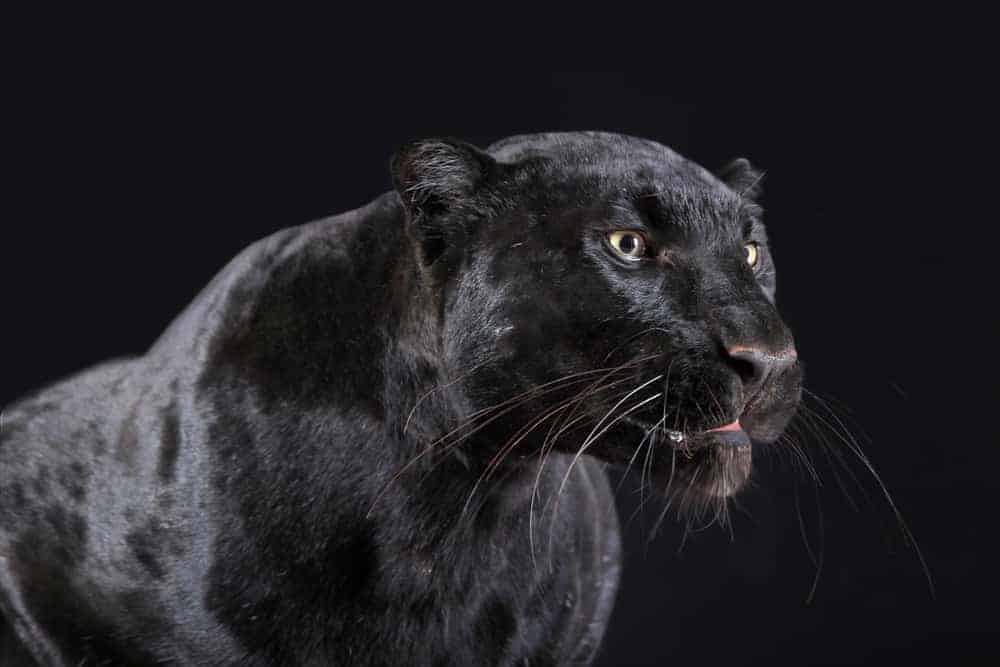 We’ve talked about what black panther dreams can mean, how they can sometimes be interpreted as a warning, and the other times, an auspicious omen for you. However, if you want to dive deeper into the topic, the interpretation can depend upon the situation. Let’s look at a few of the cases.

1. Dreaming about being chased by a black panther

If you’ve recently dreamt of being chased by a black panther, first of all, take a deep breath and relax.

This dream signifies that you’re afraid of your close acquaintances and trying to run away from all your problems. It would be best if you talk to someone you can trust to share your pent-up worries with and build up the confidence and determination to face w

2. Dreaming about a sad black panther

Most of the time, the action of animals you dream of depicts your inner personality or whatever you’re feeling at the moment.

It is common for humans to often feel sad realizing everything they’ve sacrificed in life. Dreaming of a sad and hopeless panther might indicate that you’re in the same phase of your life.

3. Dreaming about fighting a black panther

4. Dreaming about being attacked by a black panther

Dreaming of being attacked by a black panther depicts a threat in your life. Somebody might betray you, or it can be some bigger threat. So, be wary of your steps and make smart decisions.

5. Dreaming about petting a black panther

If the black panther is playful with you in your dream instead of acting with hostility, well, congratulations, some good news is on the way.

This dream signifies that somebody might have been holding secret good news from you, and they’re finally ready to share it with you. Or, you might get a piece of unexpected good news all of a sudden.

6. Dreaming about black panther with cubs

Seeing black panthers with cubs in a dream means that you’re thinking of starting your own family. You might not have contemplated it consciously, but deep inside, you’re probably willing to do so soon.

7. Dreaming about being stalked by a black panther

Dreaming about a black panther stalking you might be an indication that someone in your life is holding secrets from you or grudges against you. Either way, it is not a good sign.

So, if you’ve upset someone recently or worry someone might be passing you negative energy or thinking of harming you in any way, now is the time to rectify and address all such things before it’s too late.

8. Dreaming about a dead black panther

If you’ve dreamt of a dead black panther recently, it means that you’ll soon be confronting your enemy or opposers. However, it’s likely that you’ll overcome such troubles with an easy confrontation.

9. Dreaming about an angry black panther

As we’ve mentioned before, animals’ emotions in dreams often depict how you’re feeling in real life. So, if you dream of an angry black panther, it means that there’s a lot of anger and pent-up frustrations within you. So, it’s better to cleanse all of it before you burst.

10. Seeing a white panther in your dream:

Seeing a white panther in real life is extremely rare. Well, but it might not be that rare of an occurring in dreams. If you dream of a white panther, it most possibly means that your life will not witness any twists and turns any time soon.

Black panthers are associated with power, grace, bravery, protective instincts and even rebirth. So, if you frequently dream of black panthers or feel you resonate with panther spirit animals, we hope this comprehensive guide has helped you clear all your doubts.