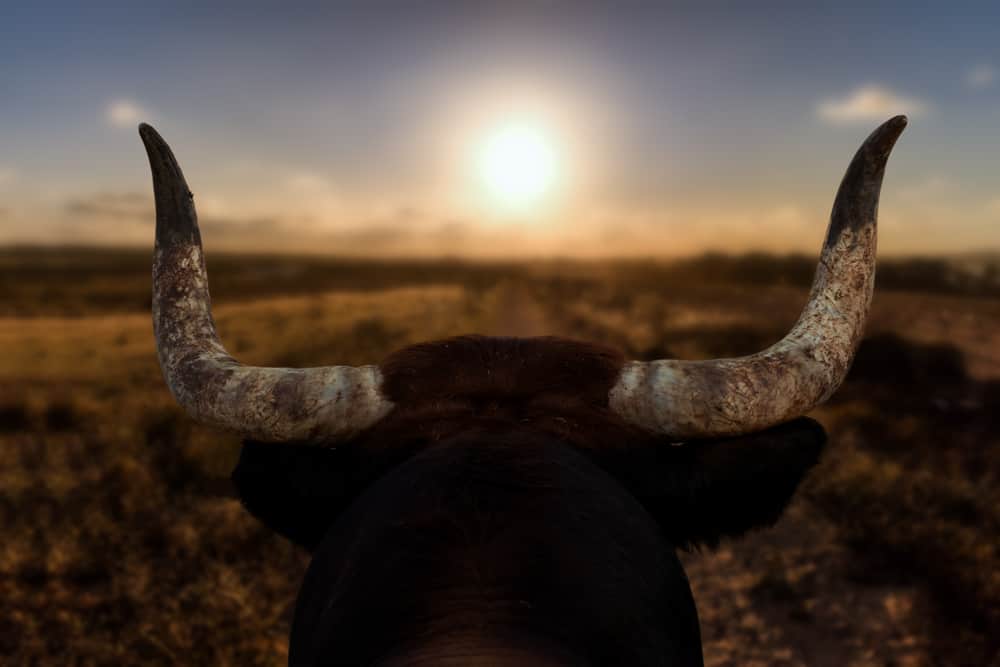 The bull, commonly known as a male cow, is one of the most powerful and revered domesticated animals. Since the beginning of recorded history, the bull has held an important place in cultures and religions.

Bull cave paintings as old as 16,000 years old have been discovered. And, as far back as 2150 BC, ancient Egyptian tribes worshipped bulls and gave them as offerings to the gods.

In astrology, the bull also appears as the Taurus in the twelve zodiac signs. Today, you can see bulls on flags, national merchandise, and as mascots by sports teams.

This powerful animal symbolizes strength, stubbornness, hard work, and fertility. Bulls are a common sighting in most rural or agricultural areas. You are more likely to dream of them and draw greater meaning if you live in these areas or frequently interact with bulls.

This article will explain common bull symbolism and meaning. If you feel particularly drawn to the bull, it could be your animal spirit, and you could tap into the bull’s energy whenever you need to.

So, let us learn more about what the bull means and symbolizes without further ado. 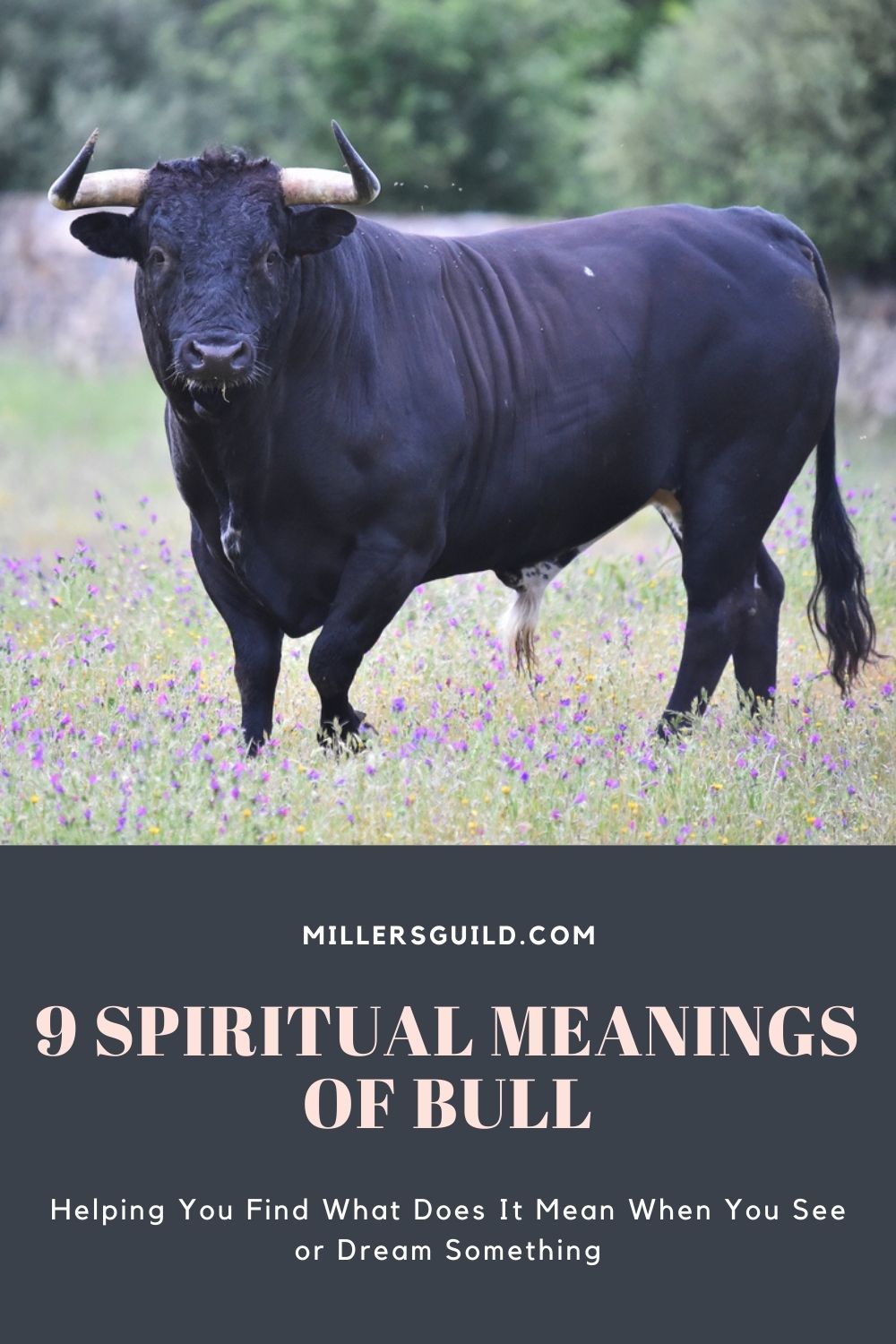 The bull holds a special place in many cultures’ folklore and mythological narratives.

The bull’s energy was called upon to help communities, families, and individuals complete the tasks and missions that lay ahead of them. In this regard, the bull is associated with determination, persistence, and consistency.

The Native Americans closely associate the bull with potency and fertility—couples looking to conceive and grow their families call on the bull energy for assistance.

The Celts also revered the bull for its strength. They looked up to it as a source of physical prowess. The bull was a symbolic protector of the tribes, especially in trouble. Calling out to the bull spirit could increase a clan’s wealth and fortune.

Celtic tribes offered bulls as a burnt sacrifice, asking God to cure a family of bareness and increase virility and potency among the clan’s men.

In China, the bull is widely used as an agricultural beast and plays a central role in the traditional narratives of the native peasants.

According to Chinese mythology, the gods sent the first bull down to earth to ensure that the peasants didn’t starve. As long as they work hard and use the gift (bull) offered to them, the peasants and their children will never starve again.

People born in spring under the bull constellation, also known as Taurus, have the bull as their animal spirit. The Taurus symbolizes loyalty, honesty, leadership, and deep passion. However, Taurians can also be stubborn, aggressive, and prone to anger.

With the bull as your spirit animal, you are encouraged to remain strong in the face of challenges. Stand your ground and mean what you say; you will gain more respect this way.

Now, let us look at some specific bull symbolism and meanings.

what does a bull symbolize?

Whether the bull appears to you in real life or your dreams, it sends you an important message. Here are some common interpretations:

There is no doubt that the bull is a powerful animal. When it appears in your experience, it serves as a source of strength.

Call on the bull spirit animal when you need to gather your courage. This animal isn’t afraid to charge at anyone or anything that seems to threaten its survival.

In the same way, you should demonstrate courage and strength when faced with a challenging situation. Instead of cowering in the face of hardship, rise to the occasion and leverage your internal strength and mental aptitude.

The bull is considered an intelligent animal that communicates directly with the gods. Its place in the lunar and zodiac signs symbolizes consciousness and enlightenment.

If you have embarked on a spiritual journey, the bull spirit can guide you on your path, aiding you to ascend higher planes of enlightenment.

Enlightenment comes with many other benefits, including peace of mind, joy, bliss, and overall wellbeing.

The appearance of a bull could also symbolize your quest for knowledge. Perhaps you have been thinking of going to school to acquire some specialized knowledge or fulfill a life-long dream. The bull signals that this is a worthwhile cause.

If you wish to be wiser, call upon the bull spirit animal. Wisdom is such an important virtue for navigating the world. Ask your bull spirit to fill your mind and heart with ancient wisdom that you may make the right decisions that truly embody your values. 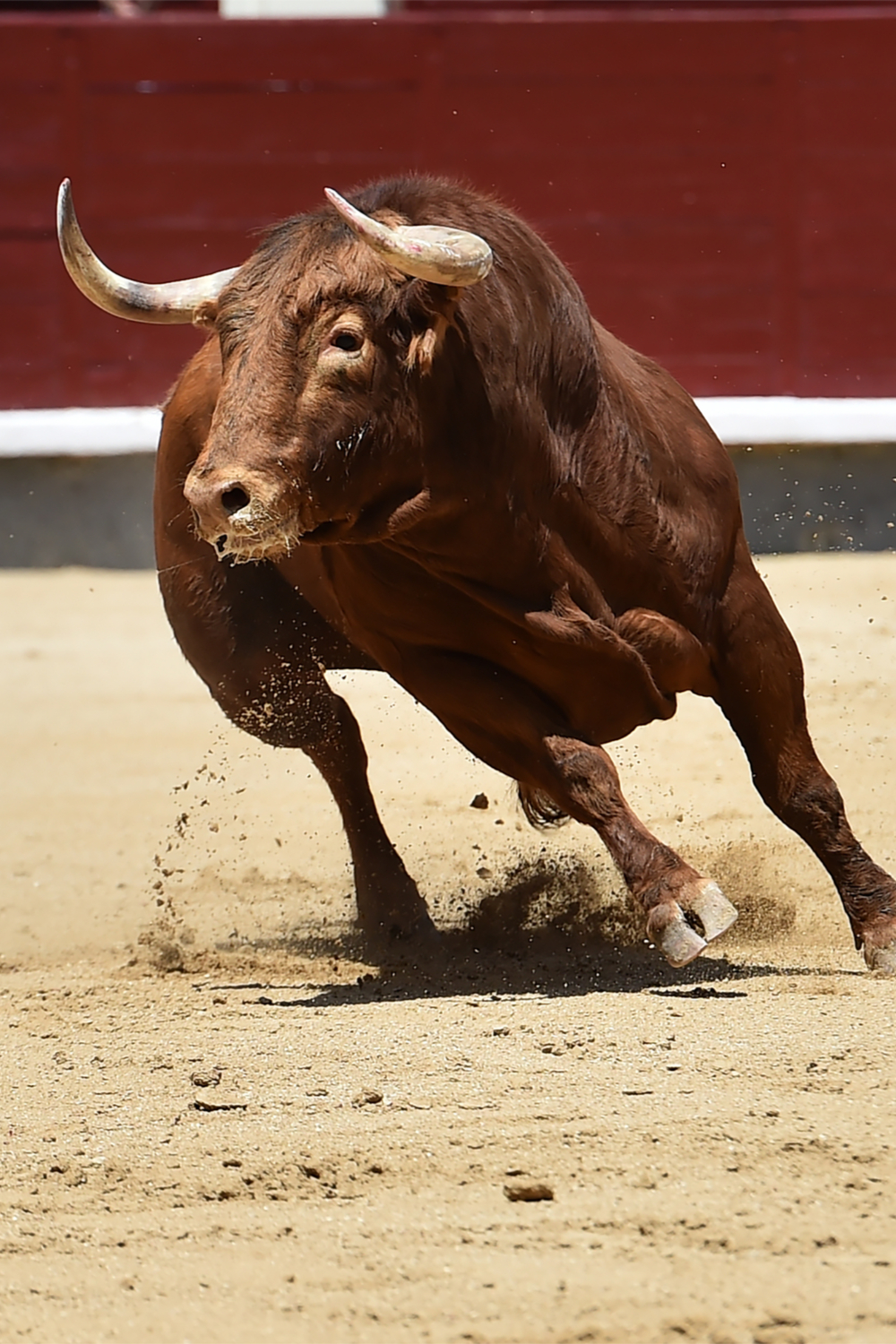 In many cultures, owning a bull or more is a sign of wealth. As a key agricultural animal, the bull symbolizes great harvest and plenty of meat to feed a community.

You are likely to encounter the bull if you think a lot about wealth and abundance. Are you in the pursuit of material wealth and plentifulness? The bull reminds you that it is in your hands to create the reality you aspire to.

Tap into your bull energy for creative ideas on growing your wealth. The bull’s association with agriculture and the earth points you to the potential financial gains to be had in the agricultural field.

If you have been thinking a lot about expanding your investment portfolio to include agricultural trades, this is a good time to do so. Ask your spirit animal to guide you in making the right decisions to grow and not lose wealth.

If you feel particularly drawn to the bull, you could tap into its spirit to aid in conception if you are looking to get pregnant. Remember that the bull is practical, and you too will need to keep things practical to succeed in your endeavors.

If you dream about a bull, it is a sign that growth is coming your way, which is always a blessing. Fertility in this context could signify a promotion, business growth, or any financial success.

The bull reminds you that growth, multiplication, and abundance come from hard work and determination. Expect your efforts to pay and stay open to receiving the abundance sent your way.

Contrary to popular opinion, stubbornness is not always a bad trait. The bull can be an incredibly stubborn animal.

Once the bull digs its feet into the ground, it will take a great deal of wooing and smoothing to get it to move. But, this beast of the farm will also not stop going until it accomplishes the mission at hand.

When the bull is your spirit animal, you are naturally stubborn and don’t follow the conventional path. This attribute can help you get things done and accomplish fetes that most of your peers couldn’t dream of.

Your refusal to comply with the traditional path may not sit well with others, especially your parents or caregivers. But, time and time again, you have proven them wrong.

That said, when you encounter a bull, it could be a sign that you need to re-evaluate your attitude. Is your stubbornness doing more harm than good?

If your actions, borne out of stubbornness, are hurting others, it is probably time to shift your behavior and attitude.

You can still be adamant, determined, and stand your ground without intentionally harming those around you. 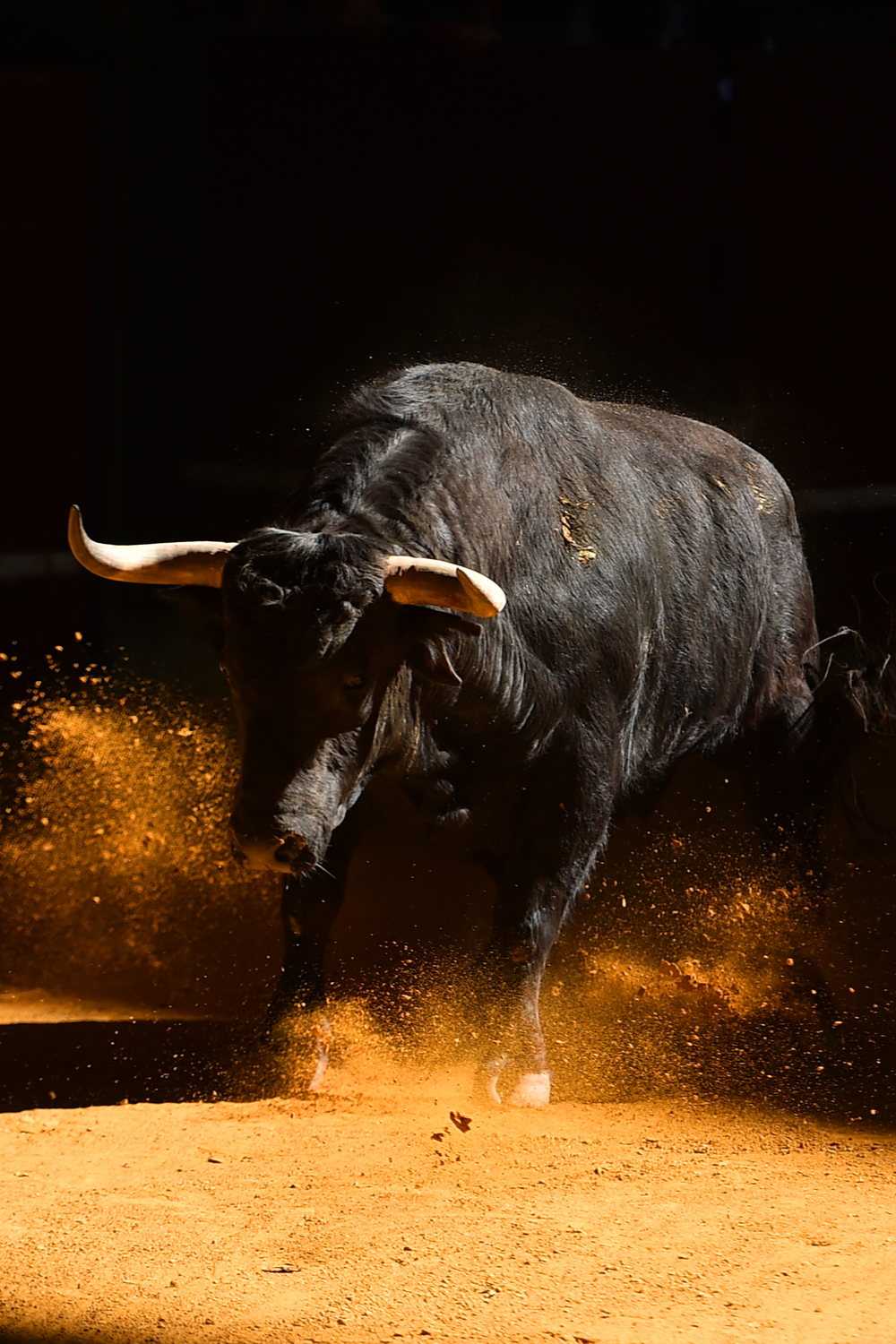 As the male cow, the bull is the leader of his family and is extra protective of his kin. When the bull appears in your experience, it is a call to rise up and into your leadership role.

Whether you are female or male, you have some responsibilities in the various aspects of your life. The bull encourages you to step up, especially if you have been slacking in areas that need you to show up fully.

In many cultures, males are required to be the leaders of their families. Seeing a bull reminds you to take this role seriously and not abandon your family, a gift from the gods.

Now is also a good time to show extra protection, especially for your little ones. This doesn’t mean stifling them and their growth; it means being more present in their lives and giving them that parental assurance.

Aside from the family setting, you can also step into leadership roles in the professional realm. If you have been thinking about moving into management, seeing a bull is a nod in the right direction.

Ask your spirit animal and totem to give you the strength and courage to pursue leadership opportunities that align with your values. After all, being in a leadership position is indeed a privilege and honor.

The bull lends its name to the Taurus zodiac sign, under which loyalty is a big theme. Taurians are loyal to a fault and value loyalty in their friends, colleagues, and acquaintances.

When you sight a bull, it reminds you of your true authentic self. If you are torn between abandoning your values and sticking to them in a particular situation, the bull tells you to stay true to yourself.

Seeing the bull in your dreams could also signify that someone is not being loyal to you. This could be a romantic partner, business partner, or colleague who isn’t replicating the loyalty you have shown them.

Taurians tend to be prone to anger. The revelation that someone is being disloyal has the potential to throw you into an angry fit.

But, before you explode in anger, try to gather all the facts. Things are not always what they seem to be. If you confirm that they are disloyal, you can choose rationality over anger.

If you have ever watched a bullfight, you know just how angry a bull can get. These agricultural beasts have been known to charge people, sometimes resulting in serious injury or death.

A bull, therefore, symbolizes anger and highly charged emotions. With the bull as your spirit animal, you might be known to have serious anger outbursts.

There is nothing wrong with having these emotions. But, you also want to keep in mind that how you express your emotions matters and has significant consequences.

The presence of the bull is a reminder that your expression of emotions has the potential to harm you and others.

On the upside, you have what it takes to control your emotions, including anger, and healthily express them.

A bull is the epitome of determination and persistence and will not stop until it completes its responsibilities. For this reason, this beast can tend to push itself too hard to the point of injury.

When you dream of an injured bull, it symbolizes that you are being too hard on yourself. You overestimate your strengths and overlook your limitations.

There is nothing wrong with pushing and motivating yourself. But, if you are injuring yourself, physically or metaphorically, perhaps it is time to take a step back and re-evaluate your approach.

Dreaming of being a defeated bull in a fight also means setting high, unrealistic and unachievable goals for yourself. You should aim high, but you also want your goals to be attainable.

Bulls play a significant role in human culture. It isn’t a surprise that they are popular mascots, emblems, symbols of national pride.

Having the bull as your spirit animal is a great privilege. This animal epitomizes desirable qualities such as strength, physical and sexual prowess, leadership abilities, and determination.

Still, when a bull appears in your experience, it reminds you to check your anger, ensure that your stubborn streak doesn’t harm others, and prioritize self-care and wellbeing by not being too hard on yourself. 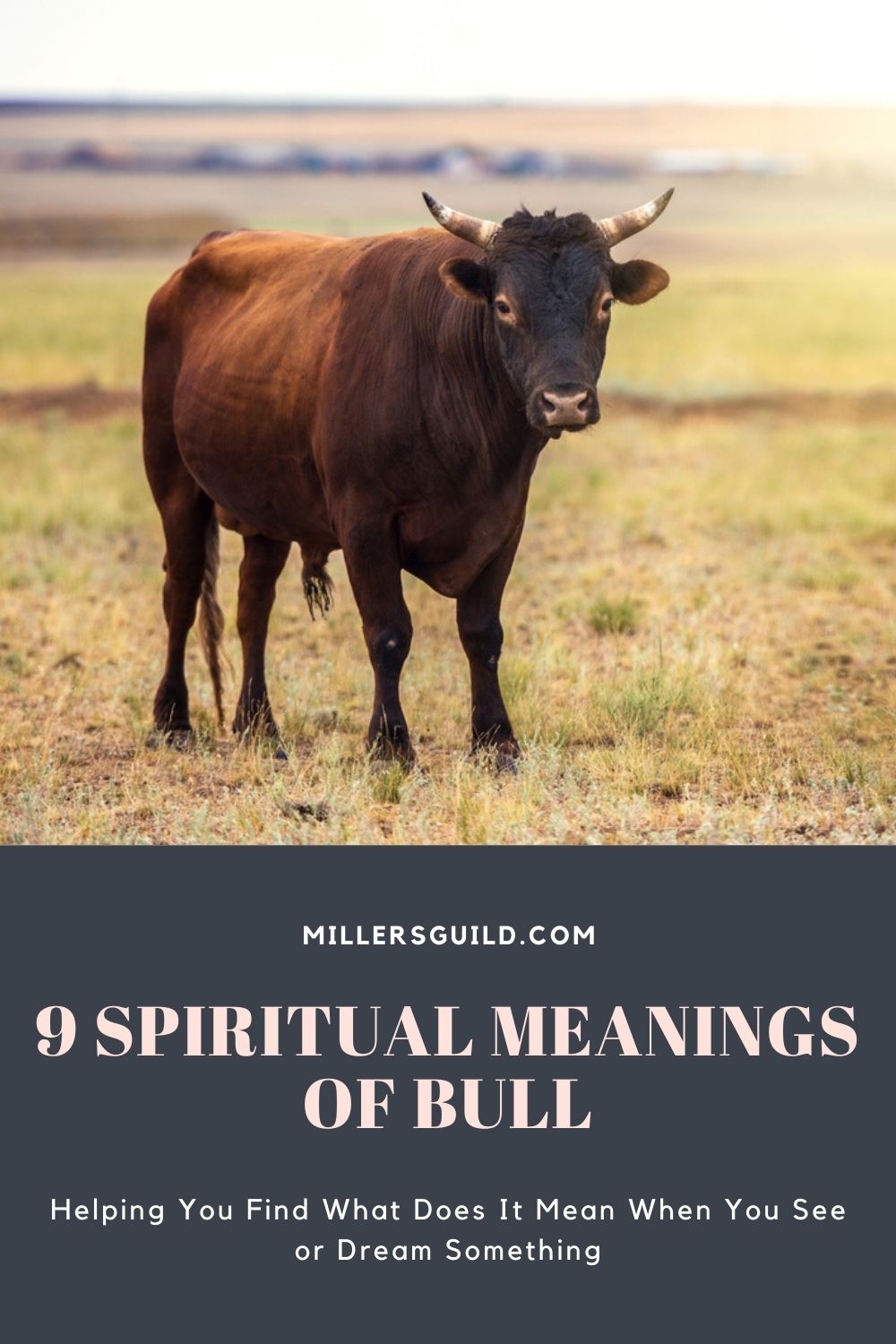