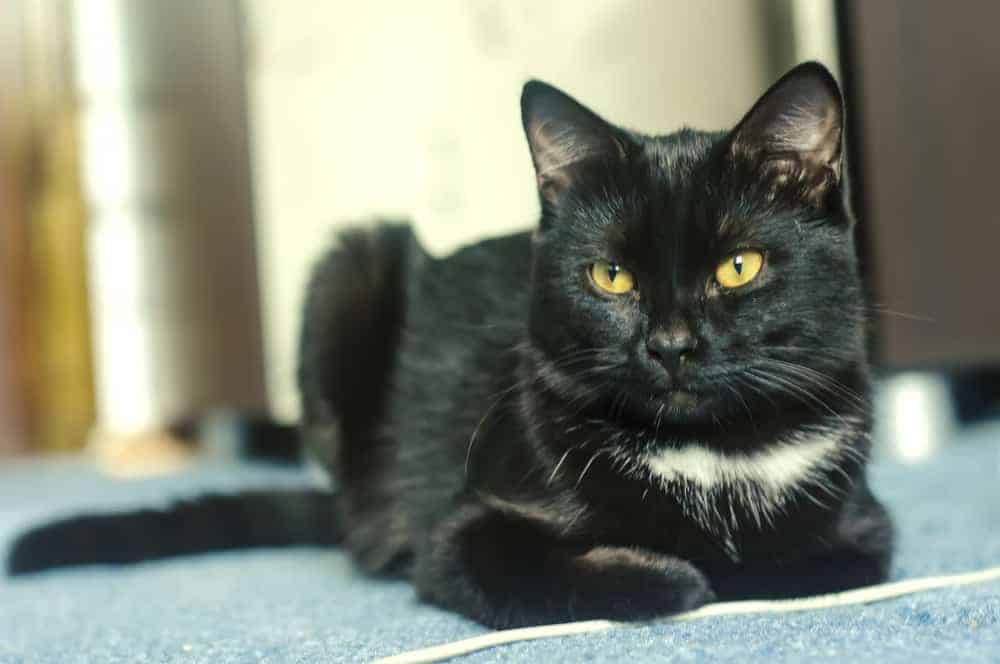 Cats are one of the world’s most popular pets. But they’ve also been held to have mystic symbolism around the globe and through the centuries.

If you’ve had an encounter with a cat that struck you as unusual, you might be wondering what it meant. Well, you’ve come to the right place to find out!

We’re going to explore the way our feline friends have acted as symbols to different cultures. And we’ll learn more about the spiritual meaning of cats, and the possible interpretations of seeing one.

So step this way to find out more … 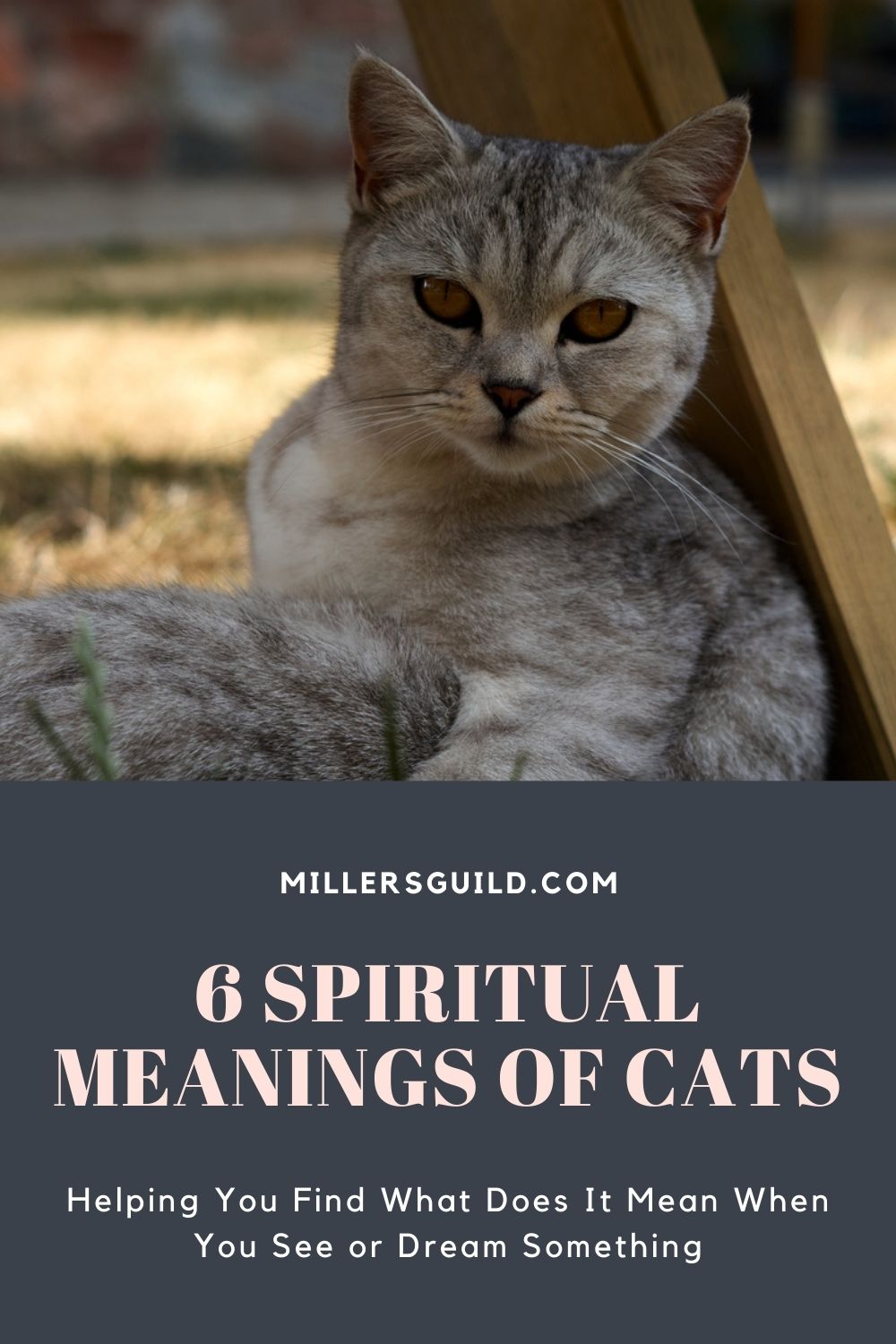 Cats in Myths and Legends

The shared history of cats and humans dates back nearly ten millennia. Cats appear in the myths, legends and art of cultures across the world. So it’s not surprising that they have their own rich symbolism.

The ancient Egyptians revered cats, perhaps because they protected their grain stores by killing rodents. When household cats passed away, they were mummified and taken to Bubastis, a sacred city dedicated to their burial.

The Norse goddess Freyja had two cats as companions. Scandinavian farmers would seek her help in protecting their crops, leaving saucers of milk for her cats in their fields.

The Picts, who lived in parts of what is now northern England and Scotland, had a Kingdom of the Cat. For the Chinese Song dynasty, cats were favored pets. And to this day, cats are seen as lucky in Japan.

The link between cats and luck isn’t always positive, however. Black cats are generally considered lucky in the United Kingdom. But elsewhere in western Europe, cats are associated with ill fortune.

Cats also appear in religious stories, though usually in the oral tradition rather than religious texts. One legend has it that the new-born baby Jesus was lulled to sleep by a purring tabby cat who jumped into the manger.

The Virgin Mary shared the gratitude felt by any new mother towards something that stopped her baby crying. She is said to have petted the cat, leaving the distinctive “M” marking shared by all tabbies on its head.

An Islamic legend tells that the Prophet Mohammed also loved cats. He was so devoted to them, he wouldn’t disturb a cat to retrieve the cloak it was sleeping on.

The spiritual meaning of animals is usually determined by those characteristics which are most obvious to us. For cats, these are independence, self-love, sensuality, freedom, patient observation and curiosity. Few people who have a cat as a pet will be surprised by that list!

But with such a range of meanings, how do you know what message your encounter with a cat might hold? And how can you be sure that there’s a message in the first place?

Did Your Cat Encounter Have a Spiritual Message?

Unfortunately, there’s no easy checklist to help you determine whether your meeting with a cat had a deeper meaning. That’s because each encounter will be different, and any message will be personal to you.

But there are some questions you can ask yourself to help reveal whether your encounter was spiritually significant.

To begin with, was there anything surprising about the appearance of the cat? If you live with a cat and your meeting followed a usual routine, it may be unlikely to be telling you anything specific. (Except, perhaps, that it’s feeding time!)

But if something about the encounter struck you as unusual or odd, it could hold a deeper message. Perhaps the cat held your gaze in a way that suggested it was trying to tell you something. Perhaps it followed you for no apparent reason, demanding your attention.

Maybe the cat appeared from nowhere, and disappeared just as abruptly. Or maybe there was just something uncanny about the experience, although you found it hard to put your finger on what it was.

Any of these could be a sign that you’re being asked to notice the cat and reflect on its meaning.

The Cat as a Spirit Animal

Do you feel a connection with cats? Perhaps you feel energized when you see them. Perhaps you sense an affinity with their behavior and outlook.

Or maybe you’ve been seeing cats a lot in your day-to-day life. That might include real, flesh and blood cats. But it could also encompass other types of appearances – in illustrations, in books or movies, even hearing them at night.

If any of this strikes a chord, it’s possible that the cat is your spirit animal. In some cultures, it’s believed that particular animals can act as our spiritual guides and protectors. These are spirit animals, and cats are among them.

If you have a cat as a spirit animal, they may appear at times when you need their help or guidance. That can be when you’re facing a period of change or some other kind of challenge.

Simply seeing the cat can give you fresh energy and motivation. And the encounter may also remind you of your own feline characteristics, which could help you to tackle your problem.

If you’re feeling let down by someone, for example, the cat could remind you of your independent spirit. You may be upset, but you have all the inner resources to cope on your own.

Or perhaps you’re anxious about how a difficult situation will be resolved. In that case, the cat may be a reminder of the benefits of patient observation. Sometimes it’s best to wait for more information before deciding how to respond.

1. The Spiritual Meaning of Seeing a Cat

The key to unraveling the spiritual meaning of seeing a cat is to listen to your own inner wisdom. As we’ve seen, different cultures attribute different symbolism to these furry friends.

And as individuals, we will also have our own experiences with cats. These will have shaped the associations they hold for us. And it’s those associations that will be central to the personal meaning of your cat encounter.

Reflecting on the details of what happened and how you felt will be the best way to reach a deeper understanding. But if you’re struggling to pin down the meaning, other people’s interpretations can provide useful guidance.

Used in the right way, these can help you narrow down the possibilities. But remember, the explanation has to feel right to you. If it doesn’t, move on and consider other options.

With that in mind, let’s look at some possible meanings behind your encounter with a cat.

2. A Cat Crossing Your Path 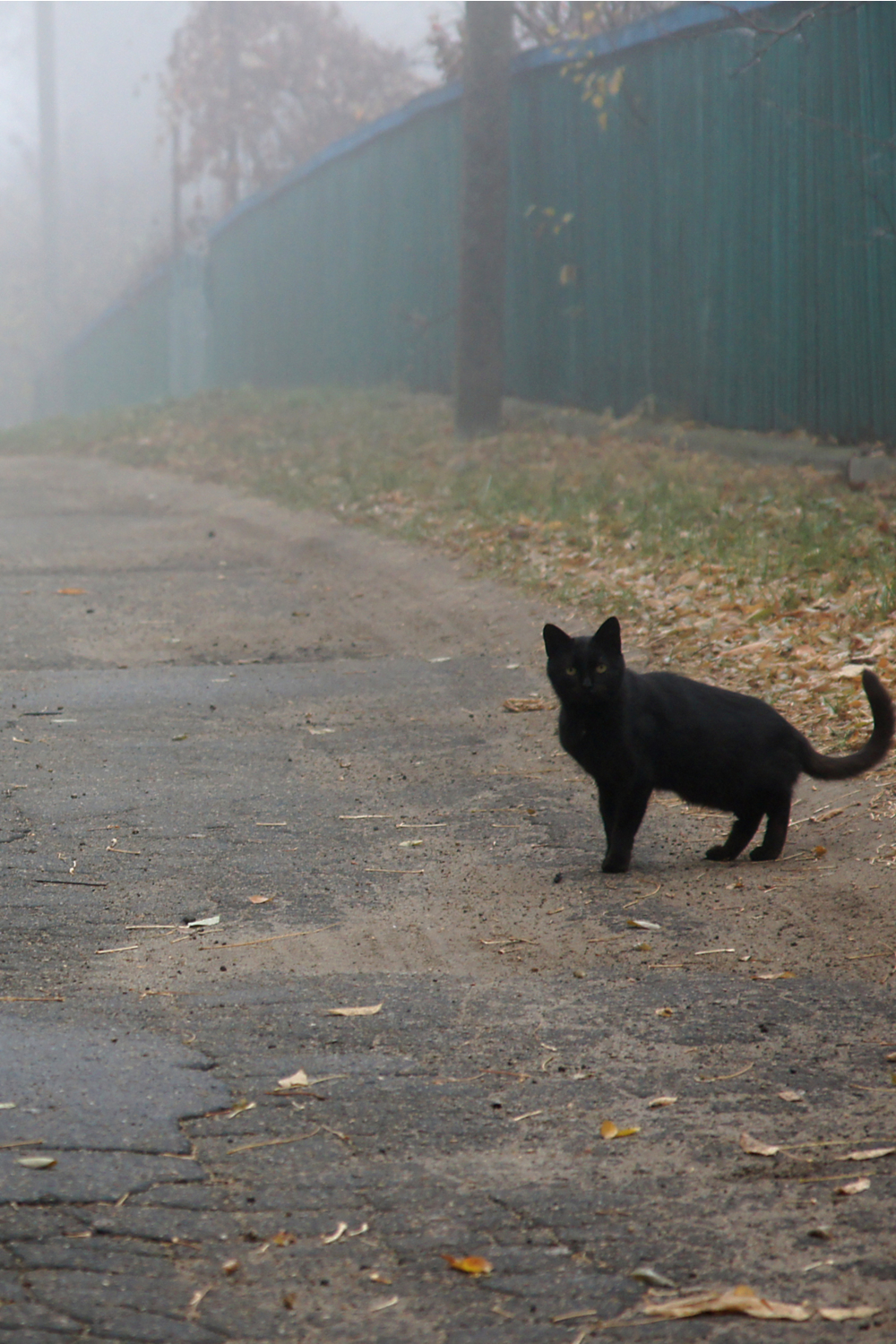 In most cases, seeing an animal cross your path brings added emphasis to its spiritual meaning. A cat walking in your way is a cat you won’t be able to ignore! So it may mean that it’s particularly important for you to heed its message.

It’s also sometimes seen as a metaphor for the future. The road before us can be seen as symbolizing the days or weeks ahead. So a cat that positions itself on your path may be symbolically placing itself on your timeline.

That can be helpful to bear in mind when you’re seeking to interpret the message. It could relate to any of the meanings associated with cats – freedom, independence, sensuality and so on. But it could also relate to events in the future, rather than what’s happening right now.

3. A Black Cat Crossing Your Path

When it comes to cats, there are also particular details that can affect the meaning. And if it’s a black cat that crosses your path, it’s considered to relate to luck.

There’s no consensus, though, on whether that’s good luck or bad! In most parts of western Europe, it’s considered to be inauspicious. But in Germany, Ireland and the United Kingdom, that depends on the direction in which the cat walks.

If the cat walks from left to right, it’s considered to be a sign of good luck. But if the cat walks in the opposite direction, it’s bad luck. So pay attention to the details of your encounter!

4. A Cat Walking Towards You or Away from You

Cats more generally are also seen as bringing good or bad luck. And that’s mirrored in another way they can appear – walking either towards or away from you.

In this case, the cat is generally seen as carrying good fortune. So if it’s heading in your direction, it might just be time to purchase that lottery ticket!

But if the cat is walking away from you, it’s believed to be taking your good luck with it.

5. A Cat Washing Its Face 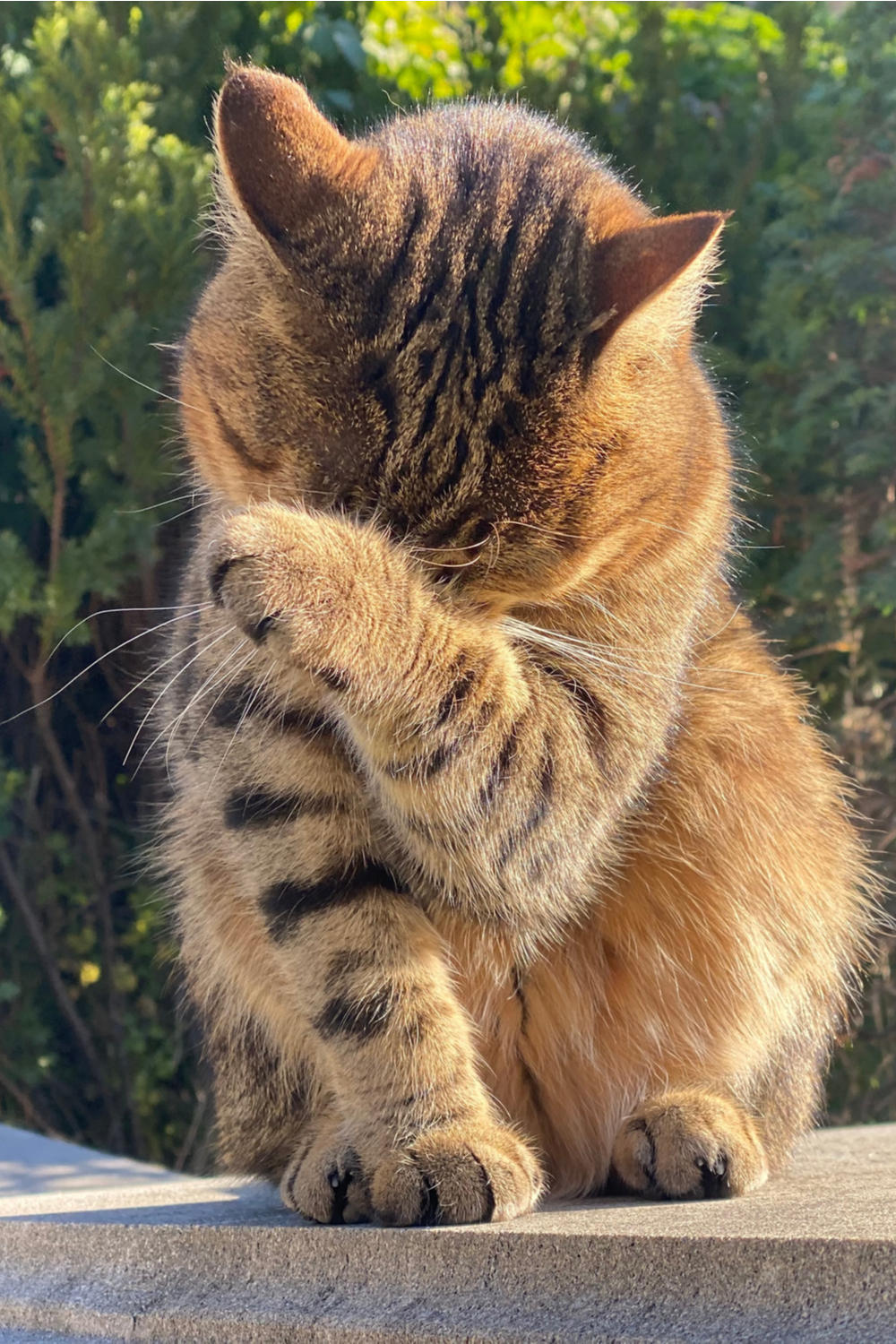 The folklore of some Native American tribes ascribes a very specific meaning to seeing a cat washing its face. It’s thought to mean that the person seeing the cat will soon be married.

The traditional interpretation applies only to females – and more particularly to a group of young girls. The first to see the cat washing its face was expected to be the first to wed.

It’s possible that this superstition connects powers of observation with success in attracting a partner. The eagle-eyed girl who spotted the cat might be similarly attentive when it came to identifying a potential suitor!

Whatever the origins, if you’re looking for love, seeing a cat washing its face could be a positive sign.

We’ve already seen that black cats can be associated with both good and bad luck. But if a black cat keeps turning up at your house, it’s generally considered to be a positive omen. (If you have a beautiful black cat as a pet, of course, you’re already very lucky.)

Ginger cats are also seen as bringing good news in relation to business or financial matters. If you’ve been waiting for news about a job interview or pay rise, this could be a good sign!

Gray is a color that’s often associated with the psychic realm. If you’ve seen a gray cat, it’s thought to mean you’re going to receive a message in a dream.

The dream could be bringing you valuable insights, so try to remember it. It can be a good idea to keep a notebook next to your bed to record the details.

Gray can also be linked to uncertainty and ambiguity. So you may be particularly likely to see a gray cat when you’re unsure about the way ahead.

Brown is often connected to domestic life and to feminine energy. If the cat you saw was brown or tabby, it’s usually believed to be a sign that good news is on the way. And that news is particularly likely to relate to your home life.

The connection here might be to practical matters. Perhaps you’re waiting for a repair or renovation, and this is an indication that it will go well.

Or if you live with others, it could relate to the spiritual energy in your home. The brown cat here could be a sign of harmony and domestic happiness.

White as a color is often associated with innocence and purity. It can also be connected to divine communication, with the white reflecting the white light of spiritual energy.

Those meanings can add an extra dimension to the appearance of a white cat. One possibility is that the message relates to the freedom that comes with innocence.

We hope you’ve enjoyed our look at cats as spiritual messengers. These beautiful animals have played an important part in human history, even being considered sacred by many cultures.

But their spiritual message is usually connected to typical aspects of feline behavior. It may relate to independence and self-reliance, freedom, curiosity or patience. And it can also be connected to a love of creature comforts.

The best way to find the right interpretation is to reflect on your experience and emotional response. We hope some of the options we’ve set out here will help guide you in your search for meaning. 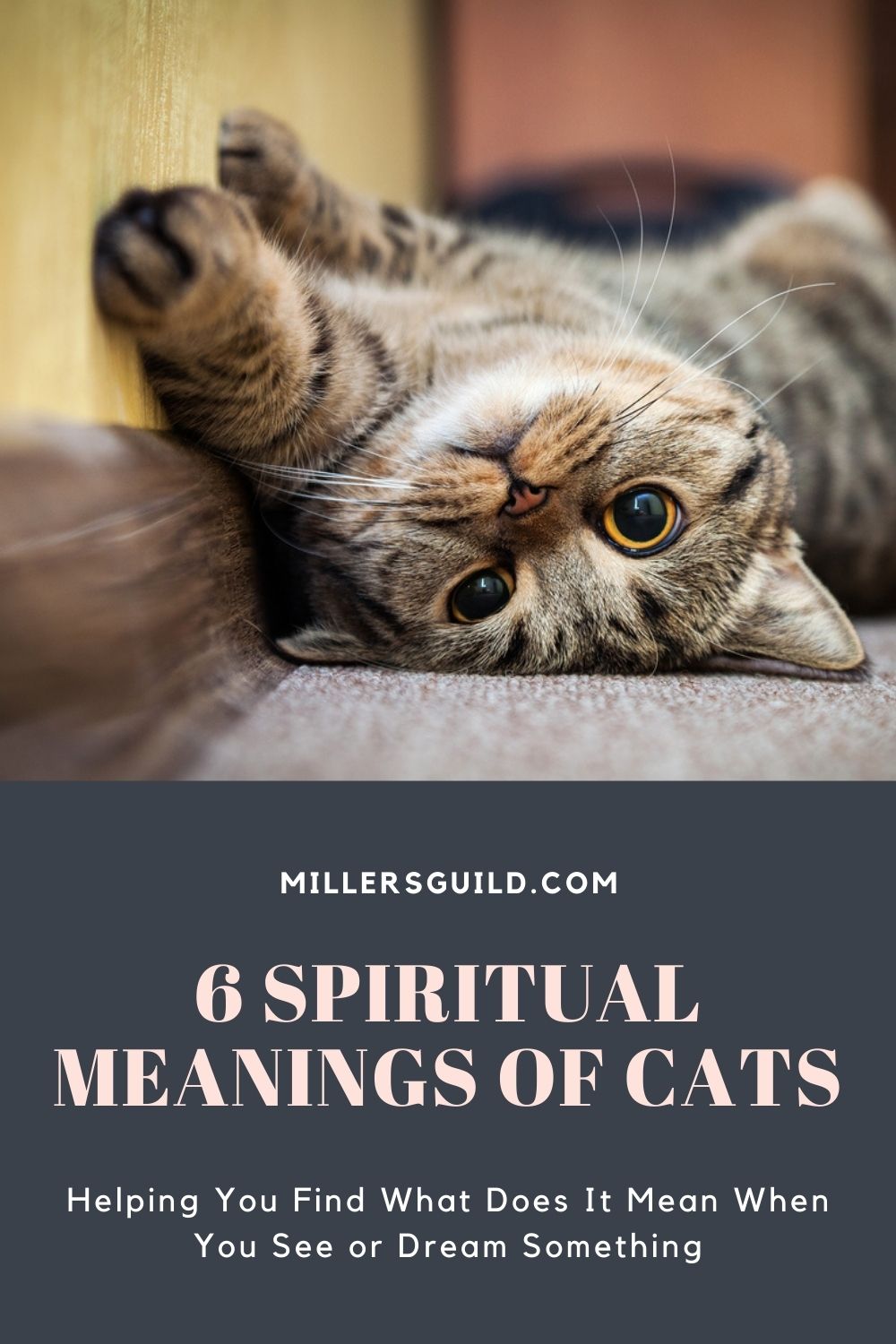 3 thoughts on “6 Spiritual Meanings of Cats”