Skip to content
Miller's Dream & Symbolism » What Does a Centipede Symbolize? (Spiritual Meanings) 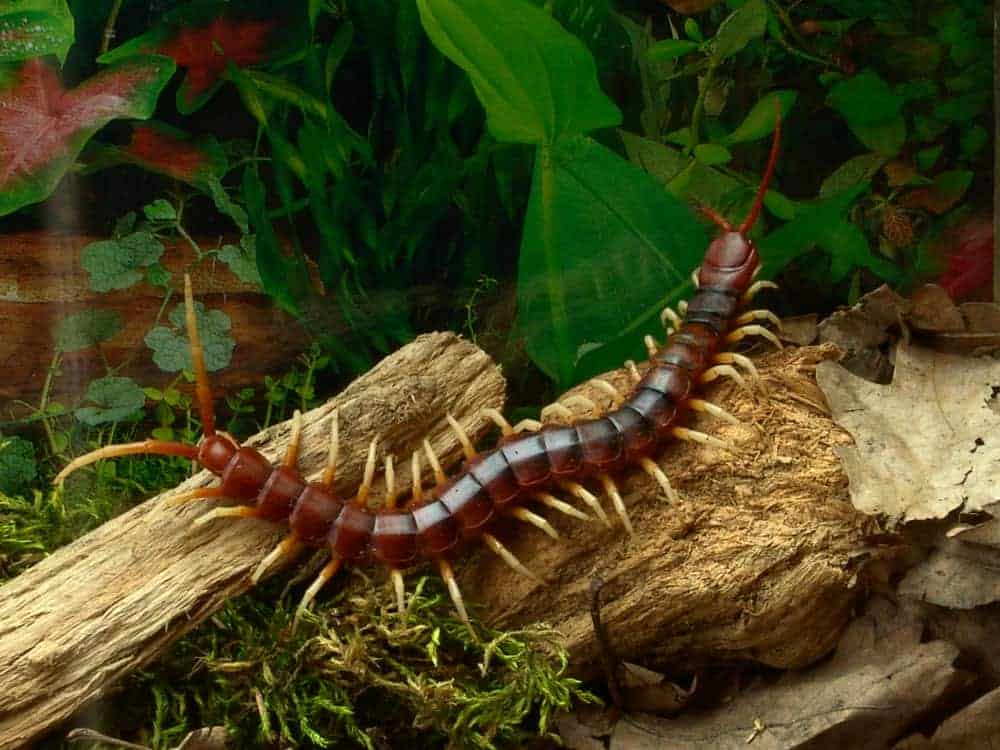 When we think of symbolic animals we often picture mighty creatures like tigers or eagles. But many humble insects are also rich in spiritual meaning – and none more so than the centipede.

This astonishing creature has had a place in human mythology for thousands of years. So what does it represent? And what lessons can we learn from reflecting on its meaning?

That’s what we’re here to find out! We’re going to delve into the fascinating world of centipede symbolism. And when we’ve finished, you’ll have all the information you need to find the meaning behind your own centipede encounter.

So let’s get started! 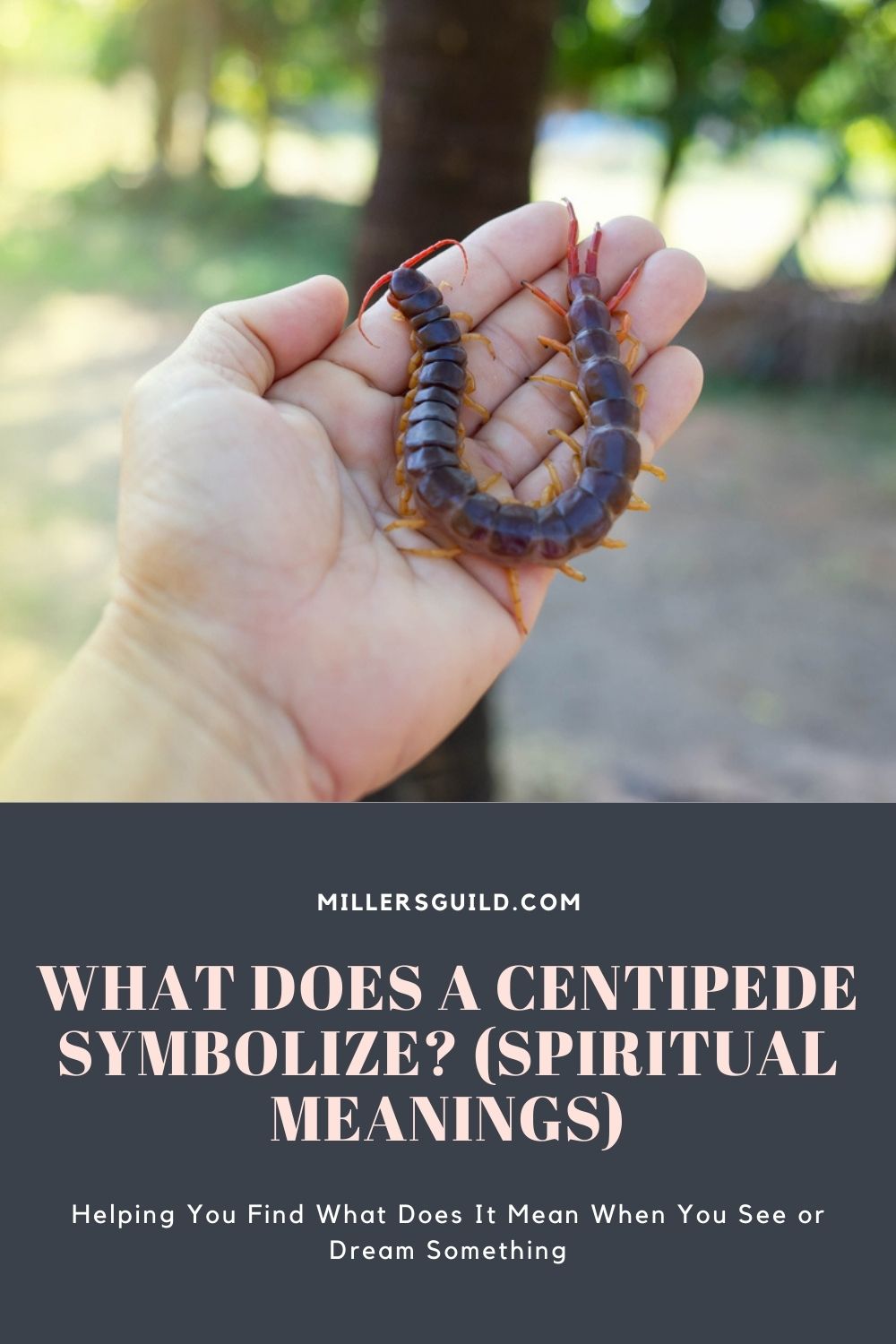 what do centipedes symbolize?

The Centipede in Ancient Egypt

Our look at centipede symbolism in the ancient world begins more than four millennia ago, in ancient Egypt.

The cult of the dead was an important part of the religious beliefs of ancient Egyptians. Bodies were preserved and surrounded by artefacts they might need in the Afterlife. But insects were a threat to corpses, feeding on them and hastening their decomposition.

The ancient Egyptians observed that the centipede fed on other insects. As a result, it was seen as a guardian of the dead, and a very important creature.

The Egyptians worshipped a centipede god called Sepa. This little-known deity had great longevity in Egyptian culture. There is evidence of its veneration from the Old Kingdom – about 2680 BC – to the Greco Roman period of the fourth century BC.

As well as protecting the dead, Sepa was associated with fertility. And the centipede was also believed to have power over venomous creatures. Sepa was often invoked as protection against scorpions and snakes.

To this day, this species is used in Korean medicine for treating sores and back pain. Sadly for them, they are roasted and pulverized for the purpose.

The venom carried by centipedes also meant they were included as one of the Chinese Five Poisons. These were used in medicine, as well as being referred to in Feng Shui and martial arts.

Just as in ancient Egypt, the Chinese saw centipedes as emblems of protection. Their images appeared on talismans and amulets. And they were believed to be so powerful that even dragons were afraid of them.

They were also considered to be an emblem of good luck in the system of Feng Shui.

The centipede also has a place in Japanese folklore, albeit in fantastical form. The Ōmukade was a supernatural giant centipede believed to dwell in the mountains and feast on human flesh. He was also associated with battle as the messenger of Bishamonten, the god of war.

One well-known tale about the Ōmukade involves the tenth century hero Fujiwara no Hidesato. He ventured into the mountains and was attacked by the giant centipede.

He shot it with two arrows, but they had no effect. The third arrow he moistened with his own saliva. Fortunately for Fujiwara, the saliva made all the difference. The Ōmukade was killed.

The spiritual symbolism of the centipede can be linked to any of these cultural associations.

This is an insect that is often linked to protection, both in battle and from other creatures like snakes or scorpions. It is also connected more widely to warfare, perhaps because its hard-shelled body has the appearance of armor.

It can also signify fertility and healing. And some people see it as a lucky omen.

Of course, all these meanings can make things rather confusing. So if you’ve seen a centipede and felt it had a spiritual message, how do you interpret it correctly?

Sometimes seeing an animal is just an everyday occurrence. But sometimes it feels a little different – as though it has significance for us personally.

If you feel that way about your centipede encounter, the first step is to ask yourself why. What was it that felt strange or important about the meeting?

It could be that something about it was unusual. Perhaps you saw the centipede somewhere unexpected. (I once found one scuttling about under my bed, which was very unexpected!) Or perhaps you spotted it whilst you were mulling over a problem that had been on your mind.

Whatever the reason, identifying it can help you focus on the potential meaning of the encounter.

But don’t worry if you find it difficult to put into words. A feeling of affinity with the centipede is important too. It could indicate that it’s there to act as your spirit animal. We’ll talk more about what that could mean later.

We’ve already seen that centipedes can have a number of different meanings. Now that you’ve identified what felt important about your encounter, you can start to narrow these down.

If you were thinking about something that’s been worrying you when the centipede appeared, the symbolism is likely to relate to that problem. Let’s take a look at some examples to see how this could work.

If you were grieving over a bereavement, the centipede could be there to offer comfort. It could be a message that the person who has passed on is protected.

Perhaps you were worrying about a situation where you felt under threat in some way. In that case, the centipede could be a sign of your own protection.

It could be offering reassurance that there are external sources of help and support. But it could also be a reminder of your own inner strength and resilience.

Or maybe you were thinking about your own, or someone else’s, physical or emotional health. If so, the centipede could be carrying its message of healing.

It may be a sign that things are about to get better. And it may also be prompting you to think about how you can play a part in that healing process. Do you need to be kinder to yourself? Or could you offer help and support to someone else?

So far, we’ve focused on the meaning of a one-off appearance of a centipede. But what if the meeting is the latest in what seem to be a stream of encounters?

Perhaps you seem to be seeing centipedes everywhere you go! That might not just be the insects themselves, of course. You could also be seeing them on television, in photographs in magazines, or even on product logos.

If you’re noticing centipedes all the time, it’s likely to be because they resonate with you in some way. And that might mean that the centipede is your spirit animal.

But what exactly is a spirit animal?

Some people believe that spirit animals are supernatural guardians and advisors. They appear at times of trouble, when we need guidance or comfort. By reflecting on their symbolism, they can help us identify a way forward.

But spirit animals can also be those with whom we share a natural affinity. The characteristics for which they’re best known are also important parts of our own personalities. So if you have a centipede as a spirit animal, it could be reflecting aspects of yourself.

People with Centipedes as their Spirit Animal 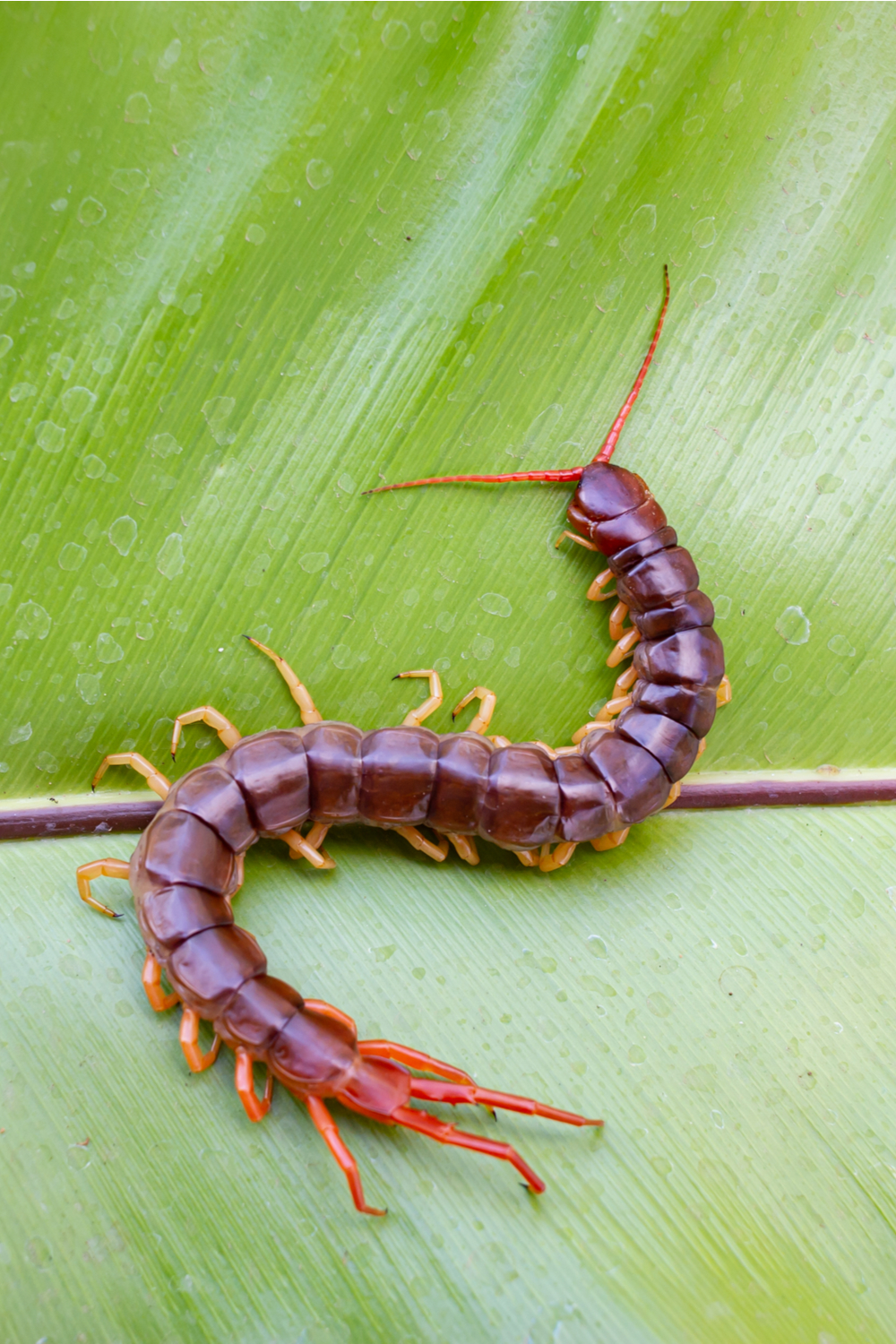 If you feel an affinity with centipedes, it’s likely that you are a natural protector. You stand up for those who are under attack. And if someone crosses you, you’re a powerful enemy.

When under attack itself, some species of centipede curl up into a spiral shape. You too can turn inwards if you feel threatened or vulnerable.

That can be a positive trait, allowing you to listen to your own inner wisdom. But remember that sometimes it’s important to ask for help. However capable you are, you don’t always have to struggle on alone.

You’re also likely to be someone who can coordinate many different projects at once. Just as the centipede masters its multiple legs, so you can keep many activities running with ease.

Sometimes these powers of coordination relate to physical skills too. People who are talented as athletes or dancers may have the centipede as their spirit animal.

And you’re not deceived by outward appearances. Some species of centipede are blind, meaning that they rely on their other senses to navigate the world. You too are able to look beneath the surface and observe what’s really happening.

One of the subjects on which we may need guidance from time to time is money. This topic is part of centipede symbolism in some cultures around the world. But unfortunately, the beliefs attached to the appearance of a centipede differ widely!

In Korea, the name of the centipede is the “money bug”. If it appears in your home, it’s thought to be a sign that money is on the way.

But on the island of Martinique, the opposite is true. Here, killing a centipede is thought to bring a financial reward. It’s even thought to be good fortune if you kill the insect in a dream.

Who’d want to be a centipede in Martinique?! 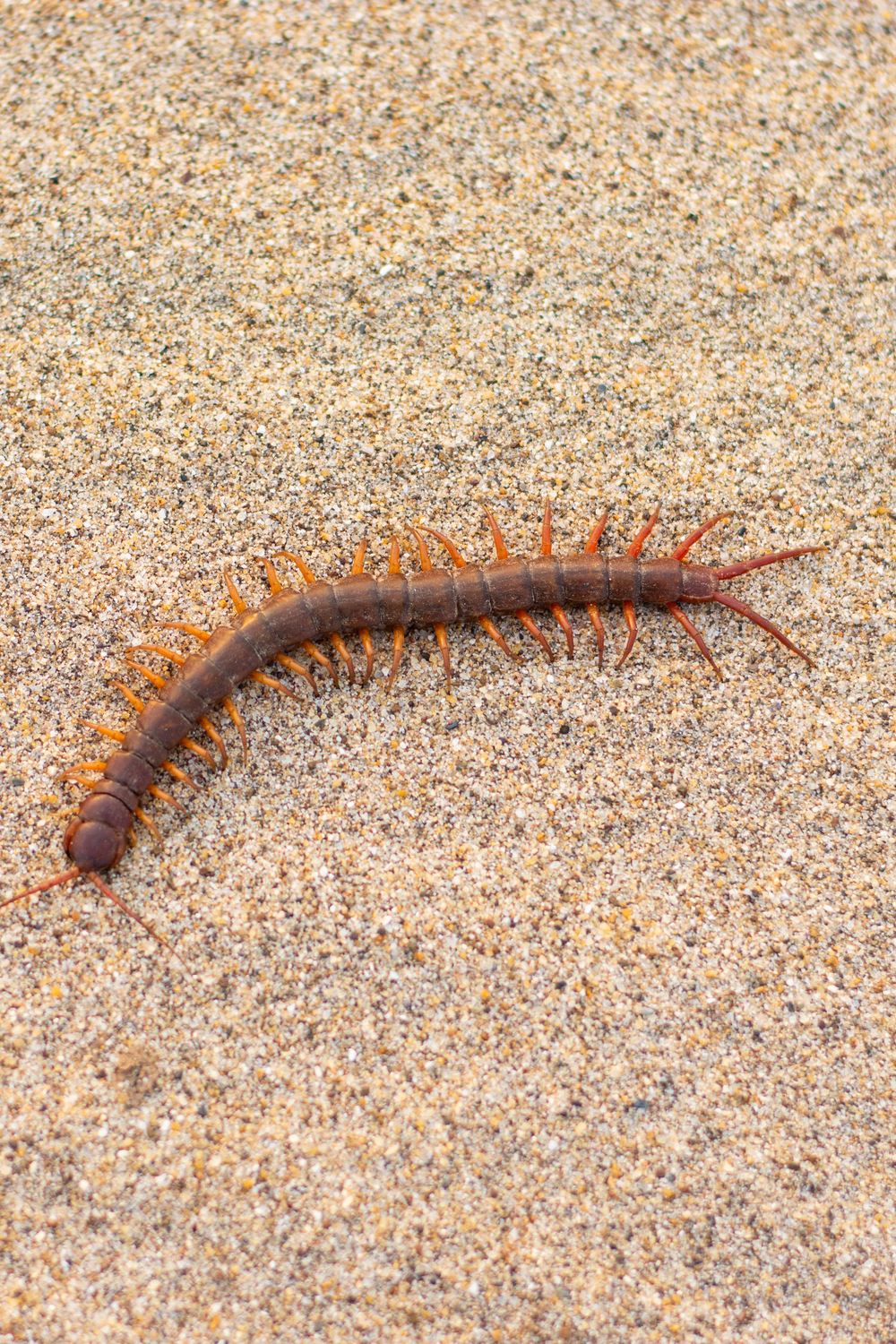 Just as with spiritual encounters in our waking lives, the meaning of dreams can usually be found by looking inwards. Meditating on what the different aspects of your dream mean to you personally will usually give you the most accurate result.

So if you’ve dreamed of a centipede, start by asking yourself what centipedes mean to you. Are they scary or benevolent? Do you see them as good or bad luck? Or perhaps you associate them with a particular place, emotion, or time in your life.

These personal meanings are most likely to be the ones that your subconscious brain is drawing on in your dream.

Some people, however, believe that dreams can carry messages from supernatural sources. So if you’ve dreamed of a centipede and can’t think why, here are some possible interpretations.

1. A Centipede Running or Moving Slowly

Centipedes are blessed with a whole lot of legs, which means they can move very quickly! If you had a dream in which a centipede was running, it could signify progress in a project. Things may be moving quickly towards your goal.

And just as the centipede is able to easily coordinate its movements, you’re staying in control. That’s a great omen for the future.

If the centipede is moving slowly, on the other hand, the opposite may be the case. It may reflect a situation that isn’t moving as quickly as you’d like it to. Your dream may be prompting you to recognize this and take action to get things back on track.

If the centipede in your dream was tunneling beneath the earth, it could represent something that’s hidden from you. This dream could be prompting you to be on your guard. It’s possible that something unexpected will emerge soon.

Some people believe that this dream is also a warning against conflict avoidance. Are you hiding your own emotions to avoid upsetting other people? Perhaps it’s time to be more open about the way you’re feeling.

Death in dreams usually represents transformation and change, rather than physical death. But we know that part of the historic symbolism of the centipede is as a protector of the dead. So what might it mean to dream of a dead centipede?

Some people see it as a sign that you’re seeking to avoid change. Perhaps you’re anxious about moving into a situation you fear you may not be able to handle.

This dream could be encouraging you to move outside your comfort zone. Only by doing so will you find opportunities for spiritual, emotional and intellectual growth.

The Spiritual Meaning of the Centipede

That brings us to the end of our look at centipede symbolism. We hope you’ve enjoyed learning more about the spiritual meaning of these fascinating insects.

When searching for the message in your own centipede encounter, begin with your own thoughts and feelings. These are the best guide to uncovering its unique significance to your spiritual journey. 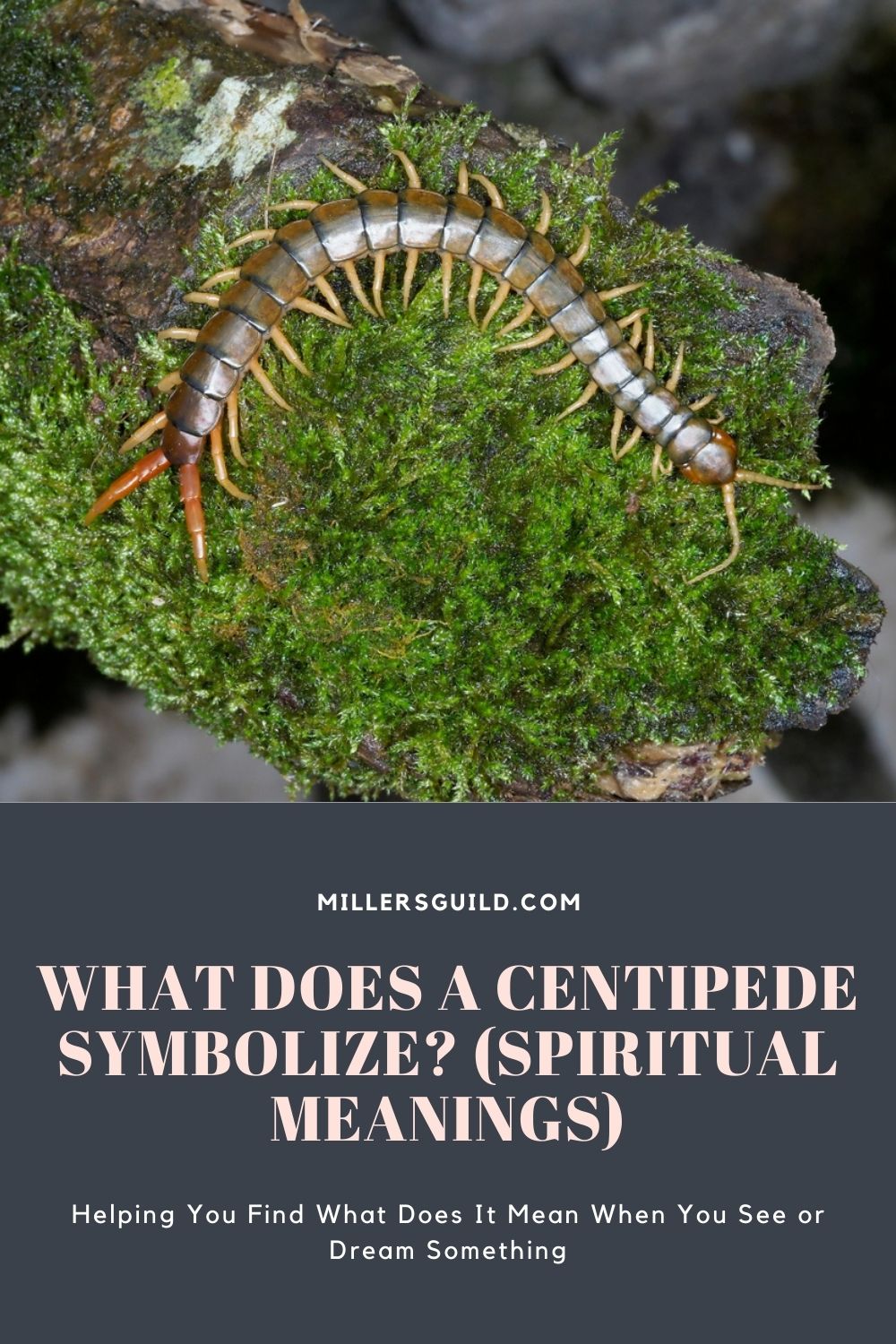