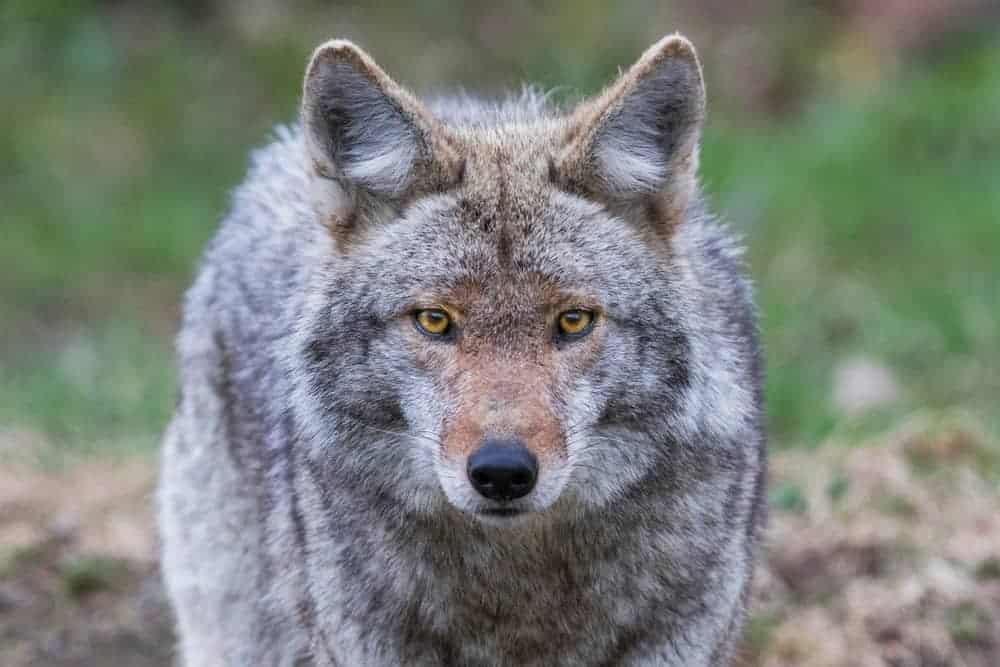 Nevertheless, coyotes manage a beautiful balance among their traits and symbolize many things. Later in this post, we’ll discuss coyote symbolisms, totems, spirits, and omens and also find out more about coyote dream interpretation. Let’s begin!

What Does Coyote Symbolize?

Unlike the popular notion that coyotes are always hostile and on a hunt, they often relax and play with other coyotes to pass their time. They’re considered cheerful and are symbolized for laughter and song by many.

Coyotes are believed to take away our sad and negative emotions and perceptions and grant humor and laughter as gifts in return.

Whenever around, coyotes keep humans on their toes. They even trick humans and steal their food. They’re excellent hunters and use cunning tricks on their foes to advance their agendas. They can even hunt deers, even though the preys are impressively bigger in size.

So, coyotes are symbolized as tricksters, and those with coyote totems are believed to use their wit spontaneously whenever needed.

One of the characteristics of intelligent animals is their patience. They’re not impulsive. They take their time while hunting. They stalk and observe their prey until they’re ready to attack. And, when they do, they do it successfully. Coyotes do the same.

The patience of coyotes is what makes them adaptable enough to survive in cities. They look around and wait for the perfect opportunity to search for food in solitary. So, a coyote symbolizes patience and opportunistic behavior.

Coyotes are widespread across North America. They’re mostly found around farms, where they’ve troubled farmers by attacking cattle. In nature, they are comfortable with hunting smaller animals for survival.

What’s amazing is that they’re also found living around highly populated cities such as Los Angeles, where they fill their tummies mostly from leftovers in the garbage cans. This fact alone is enough to verify how adaptable these organisms are and how excellent their survival skills are.

Thus, coyotes symbolize adaptability. They mean that one should find ways to live, to be precise, live happily, whatever the situation is and wherever you are. We should work with what we have and not complain about what we don’t.

Coyotes are intelligent animals. Though not as notorious for cunning as the foxes are, coyotes use their wits in many ways to survive in the wild. They rely on their senses to figure out their surroundings and find their prey and are believed to be highly resourceful at problem-solving.

Coyotes often hunt at night because they’re aware that their senses unleash at a bigger potential during the night.

Coyotes find a way to give a lesson or wisdom in any situation. However, the teachings are never straightforward though. So, never take coyote totem superficially, as there almost always is a hidden meaning or teaching for you to reap.

We’ve discussed how coyotes are symbolized for their playful trickery and patience. But when the situation demands, coyotes can be dangerously territorial and hostile and scare away many other animals.

They attack smaller animals if they invade their territory but are smart enough to be wary of those animals bigger than them.

Coyotes are symbolized for fun as well as wisdom. They are silly and jokesters at times, and intelligent when the situation demands.

They relax and play tricks whenever they’re not hunting or endangered, but when it’s time for serious issues, they make sure they use their acumen best to survive. In short, they know how to maintain an impressive balance between these two contradictory traits.

So, you can also learn this balanced approach to life from coyotes. It awakens and connects you to both your playful as well as resourceful personality traits. This way, you can use your wisdom to excel at work or solve issues, while your playful personality will energize your lust for life at the same time. 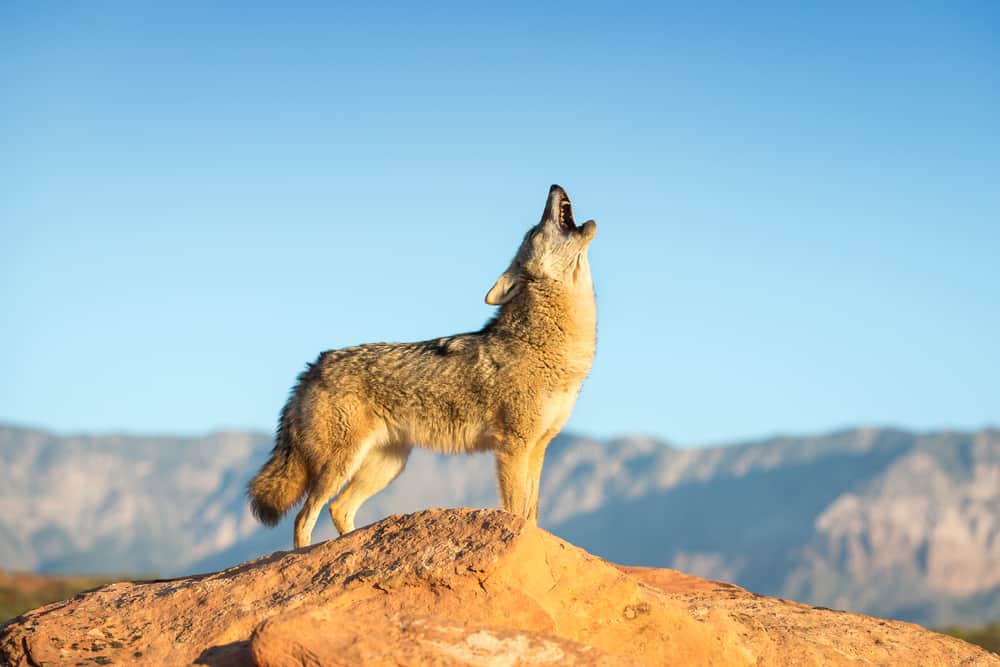 Coyotes have been able to penetrate deeply into Native American tribal cultures. They hold a special place as beings with supernatural powers among such tribes.

Some tribes symbolize coyotes for their intelligence and caution, while some see them as reckless and silly animals.

Similarly, in many Eastern tribes, coyotes are considered magical and wise animals, which allows them to shapeshift and perplex their foes. In Hinduism, coyotes are portrayed as pets of deities.

Celtic mythology and folklores don’t talk much about coyotes. This may be because of the fact that this animal is not primarily found in these regions.

However, they do talk about foxes, which are similar to coyotes in many ways. For instance, foxes are also symbolized for their wisdom and trickery.

In Celtic, this group of animals are also considered helpers to humanity, and some believe that their spirit guides are considered to be present in the otherworld as well.

The name ‘coyote’ in Christian means smuggler. In the bible, coyotes are portrayed as animals who avoid traps in the wild and steal other animals’ prey. They are considered knowledgeable animals.

If you’re interested in finding coyote’s biblical meaning, you can find so in Isaiah’s paragraph. There, he complains that even coyotes and lizards are more grateful than his people, implying that these animals do not deserve as much acknowledgment and respect.

If you have coyote spirit animals or just encounter them in reality or dreams frequently, it might be a sign that you need to let loose a bit and enjoy your life. It’s telling you to relax and embrace your inner childishness and playfulness.

It might also mean that if you want to follow a new path in your life, it might need some adaptation. The path can be unpredictable; sometimes, you need to take a leap of faith and take action based on your instincts, while the other times, it requires a careful risk-reward analysis, where you must play it safe.

Having a coyote spirit animal grants you a lot of positive traits. With its assistance, you’re a natural comedian and have the ability to make others smile and laugh. You’ll find ways to inject humor in life’s seriousness, which makes everything easier to deal with.

You’ll have no hard time socializing and building connections, as people often find themselves feeling comfortable with warming up to you due to your playful nature.

You’re not only sociable and friendly but also agile and resourceful. You are quick to spot and grab the opportunities.

With a coyote spirit animal, you’re a natural trickster and an impressive escape artist. With this trait, you might fall into bad influences and habits, such as stealing. You love playing tricks on people and keep them wondering if or not you’ve done anything harmful.

You don’t believe in a systematic way of education and believe in learning via trials and errors. What’s more, you often find it hard to take others’ suggestions and learnings into consideration, which leads you to be stuck in the same perceptions and scenarios.

Likewise, you’re likely to be attracted to trying out new things, no matter what the risks are.

Coyotes are protective of their young ones. Coyotes also bond for the long term with their pair and mate for life; i.e., often, coyotes are socially monogamous. So, trust, family, loyalty, and tribe, are very important for coyotes. Those born under coyote totem also exhibit the same characteristics.

People with coyote totems are spontaneous at playing tricks and inducing laughter out of situations. They find no trouble laughing at themselves. They often trick their peers and loved ones with light-hearted games.

Also, coyotes are not afraid to be vulnerable. They make wise decisions and believe in simplicity.

If you encounter a coyote crossing your path, it means that there is something in your life that you need to let go of. It can be some troubles or worries you’re holding onto. You should muster the courage and energy to get rid of them and bring joy and humor back to your life.

Especially if you witness a coyote during the day, which is very rare, it means that you need to stop being serious all the time. Encountering a coyote also symbolizes that you need to foster your social relationships and build strong connections.

On the other side, encountering a coyote is considered a bad omen, often related to witchcraft, in many traditions.

Likewise, you might encounter coyotes when you’re in a stagnant phase in your life, feeling helpless and lonely. In such cases, the coyote is hinting you to use your wit and resourcefulness to tackle the situation.

When To Call On Your Coyote Spirit Animal

If you feel your life has started being the definition of seriousness and somber, summon a coyote spirit animal to fill your life with the right amount of humor and laughter. Sometimes, laugh at yourself, play harmless tricks on your loved ones, and spread smiles.

You might find yourself feeling lonely and drowned in a well of responsibilities. Calling on your coyote spirit animal at such times will help you remember that you have friends and well-wishers around you and assist you to relax and just have a long-waited good time.

Likewise, going through major changes in your life or entering a foreign situation can also overwhelm you. It is beneficial to summon coyote spirit animals at such times. It will help you remember that you’re a survivor, a fighter, and assure you that you’re worthy and able for everything.

Moreover, if, at times, your mind is filled with intellectual questions regarding life and the world, calling on your coyote spirit animal will grant you the necessary wisdom.

Common Coyote Dreams And Their Interpretations

If you’re dreaming of chasing a coyote, it means that you’re bored by the same old patterns in your life and are looking for some change, whereas dreaming of being chased by a coyote presages someone else trying to harm you or tarnish your reputation.

And suppose the coyote successfully attacks you in the dream. In that case, it can be interpreted as challenging situations in your life being imminent, and you might want to rectify your wrongdoings as soon as possible to save yourself from others’ resentment.

On the other hand, if the coyote you dreamt of was a white one, it signals your want for fame and fortune. And, if you dream of howling coyotes, it means that you’ll soon hear good news from a family member.

Humans can learn a lot from nature and animals. Like any other spirit animal, coyotes also have a lot of guidance to offer humans. Always look out for their wisdom, as they can often be indirect.

So, if you were planning on summoning your coyote spirit animal or tattooing coyote on your body, we hope to have given you all the details essential for you to know about this small yet impressive animal.