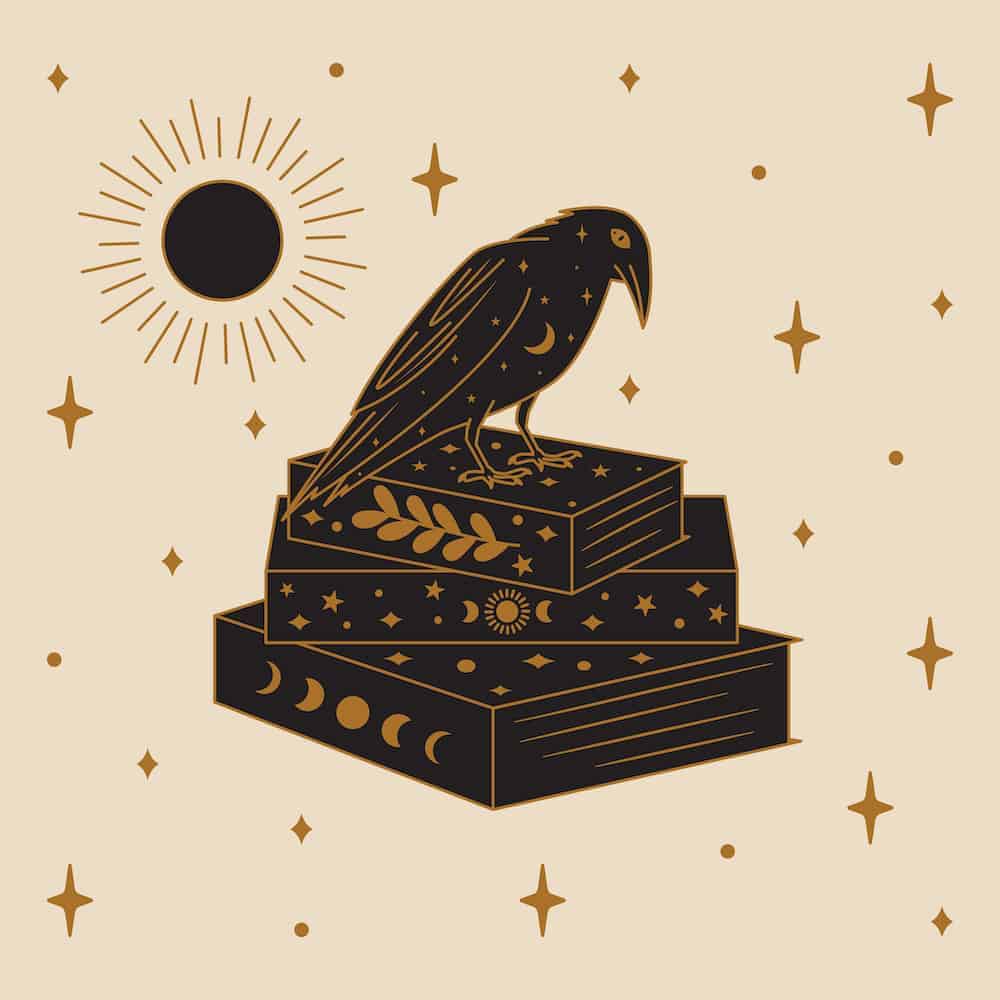 Have you been seeing lots of crows? Or perhaps you’ve had one particular encounter that struck you as significant in some way?

Either way, you may be wondering what it all means. That’s what we’re going to find out! We’re going to explore the spiritual meaning of crows. We’ll look at their symbolism, and explore the possible meanings of different types of encounter.

So if you’re ready to find out more, step this way! 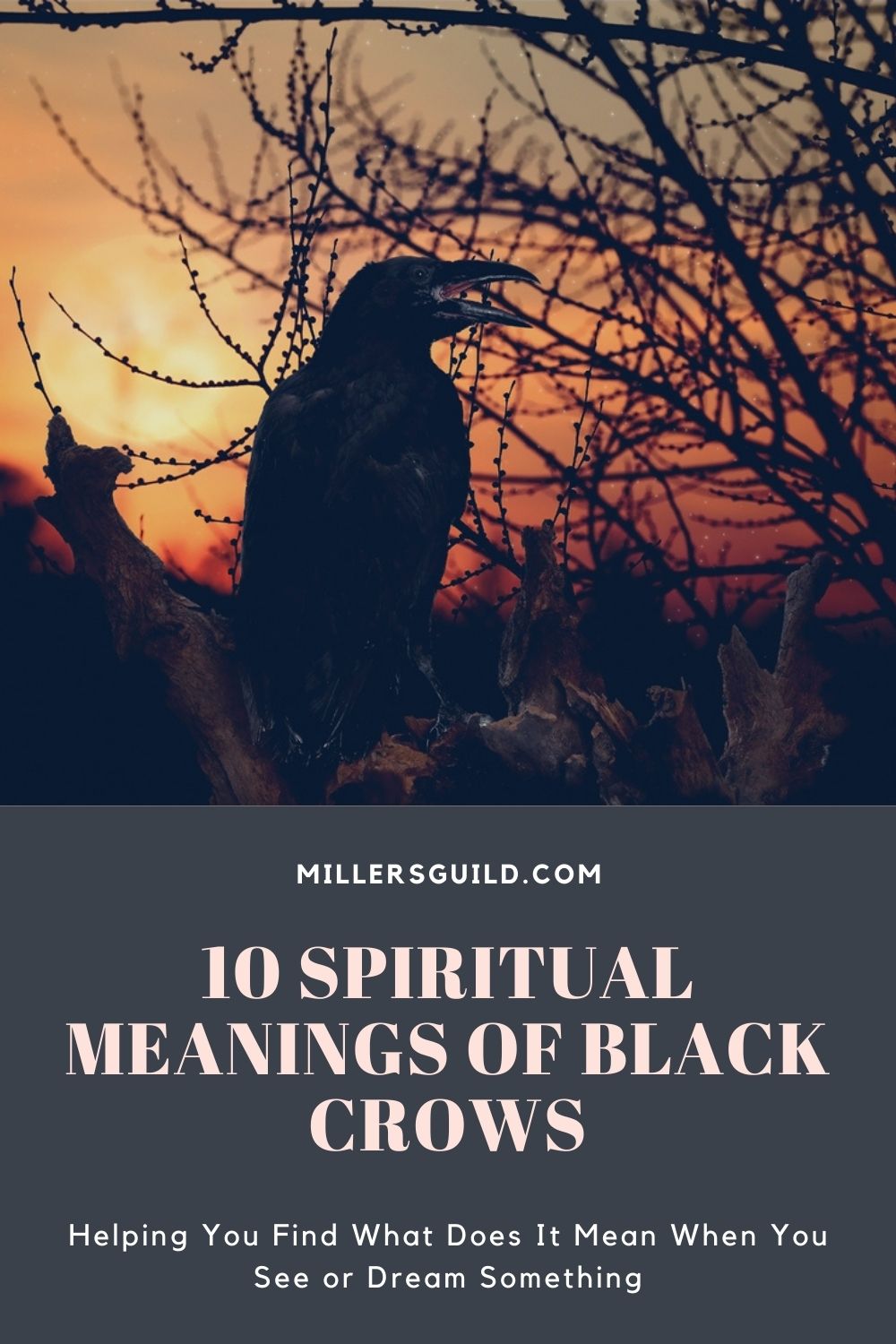 Was Your Crow Sighting Significant?

Like most animals, crows carry a range of different symbolism. That means that determining the spiritual message behind your encounter usually involves picking from a number of different alternatives.

We’ll talk more about what those different options might be shortly. But let’s start by looking at the range of factors to take into account when analyzing your encounter with crows.

The first thing to notice is the context for your meeting with the crow. Was the encounter something could reasonably be expected to happen in the course of a normal day? Did you, for example, see crows whilst out walking somewhere where there are lots of wild birds?

Or was the meeting surprising in some way? Perhaps a crow appeared just outside your window. And perhaps you live in an apartment on the 26th floor, in the middle of the city!

Encounters that are more obviously out of the ordinary might be more likely to hold a spiritual message. But that doesn’t mean that what appears on the surface as an everyday occurrence can’t also have a deeper meaning.

So how do you decide whether that’s the case?

The most important guide here is the way you feel. Listen to your instincts. If you felt that something about your crow sighting was significant – it was. You are the best judge of your own experience.

If something has made you think twice about the appearance of the crow, it probably reflects your inner wisdom. You’ve picked up on something that feels important, even if you haven’t been able to consciously identify what it was. That means it’s worth thinking about what lies behind that.

Last but not least, the frequency with which you see crows can be important.

Perhaps you didn’t pay much attention when you saw one on a tree as you walked to work. But then it was there again on the way home. When you turned on the TV, there was a documentary about crows. And when you picked up a magazine, there was a photo of a crow on the first page.

Repeated appearances could suggest that something more meaningful is going on. We’ll consider shorty what that might be.

The Symbolism of Crows

Crows have been considered as symbolic birds for centuries. The meaning attached to their appearances can, however, vary depending on the details.

Because crows feed on carrion – dead or dying creatures – they have often been associated with the underworld. Sightings of crows have been considered to have occult significance, and some people see them as simple bad luck.

But that interpretation misses the deeper spiritual meaning of death as a process of transformation.

Crows’ association with death means they can often signify the end of one phase and the beginning of a new one. While that can sometimes be a painful process, it also brings the hope of new beginnings.

Crows often appear as messengers in myths and legends, bringing prophecies of what is to come.

And they are associated with what some refer to as the “shadow self” – the darker, unacknowledged parts of our beings. Their appearance can be a prompt to reconsider the perspective we’re taking on a situation. In particular, they can remind us of the damage caused by negative ways of thinking.

In addition to this broad symbolism, the details of your meeting with a crow may affect its meaning. Let’s take a look at some of the different scenarios and what they could signify.

The meaning behind sightings of birds is often believed to depend on how many you saw.

The most famous example of this is magpies, where there’s even a popular rhyme to help you remember the meaning. “One for sorrow, two for joy, three for a girl, four for a boy.”

There are some parallels between the significance accorded to crows and magpies. But there are some differences too – and sadly, there’s no rhyme for crows to help us!

Crows are often seen in flocks (the collective noun is famously “a murder of crows”). Seeing a single bird is therefore often associated with solitude and loneliness.

But the idea of the crow as messenger lies behind an alternative interpretation. Some people believe that the appearance of a solitary crow is a message from a deceased loved one. As such, it can bring consolation in times of grief. 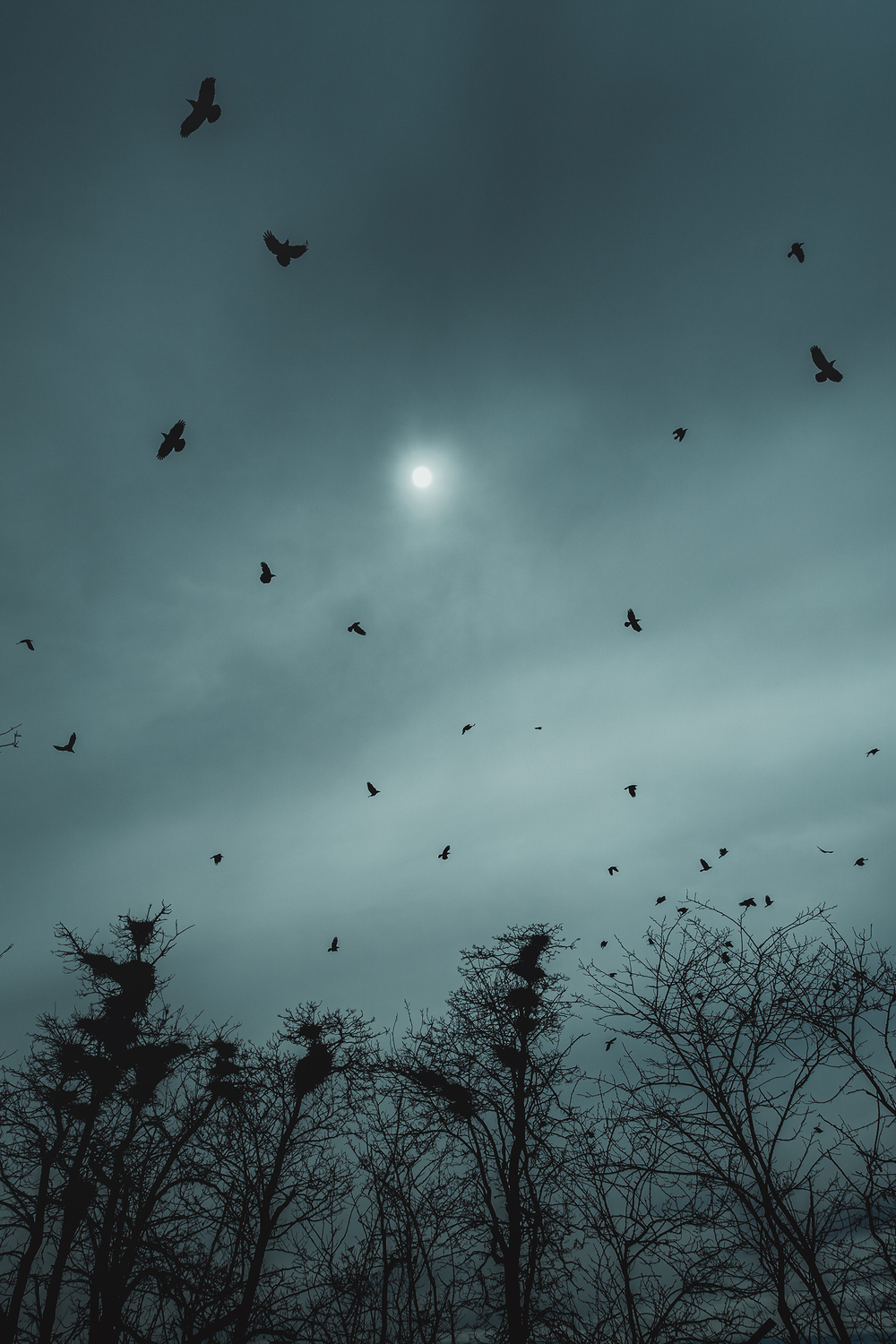 If you saw many crows, traditional interpretations attribute different meanings, depending on the number.

Two crows are considered to be an omen of good news. Three signify that there’ll soon be a wedding in the family. And four crows may mean that wealth and prosperity lie in your future.

Seven breaks the cycle of bad news, with the number thought to be linked to travel or moving house.  But it’s back to form if you see eight crows: it’s considered to mean sadness in your future.

3. A Crow Flying Across Your Path

Any animal that crosses your path can be seen as a strong message. By passing directly in front of you, you can’t miss seeing it. And if the path ahead is a metaphor for the future, the creature is placing itself squarely in your timeline.

Crows, of course, are more usually seen flying than strutting around. But the meaning if one crosses your path is the same, whether it’s in the air or on the ground.

It’s usually considered to be a message to pay attention to your own thoughts and feelings. The crow here is representing your shadow self, that part of you that you may prefer not to recognise.It could be drawing attention to negative behaviors that are holding you back.

Are you avoiding being honest about what you really want? Or perhaps a lack of self-belief or fear of success is stopping you taking the necessary action to achieve your goals?

Another possibility is that the crow augurs change ahead. This could be painful in the short term, but in the longer term will lead to personal growth and success.

If you saw a crow flying above your head, it could be a message about taking a fresh perspective. It may be prompting you to rise above your situation, and look at it from a different angle.

Crows, as we’ve seen, are skilled problem solvers. A crow appearing to you in this way could be a message to tap into your own instincts to overcome barriers.

Perhaps you already have an inkling about how to address the problem you’re facing. But maybe you’ve been dismissing it as a possibility. The crow may be prompting you to consider whether unquestioned assumptions are holding you back. 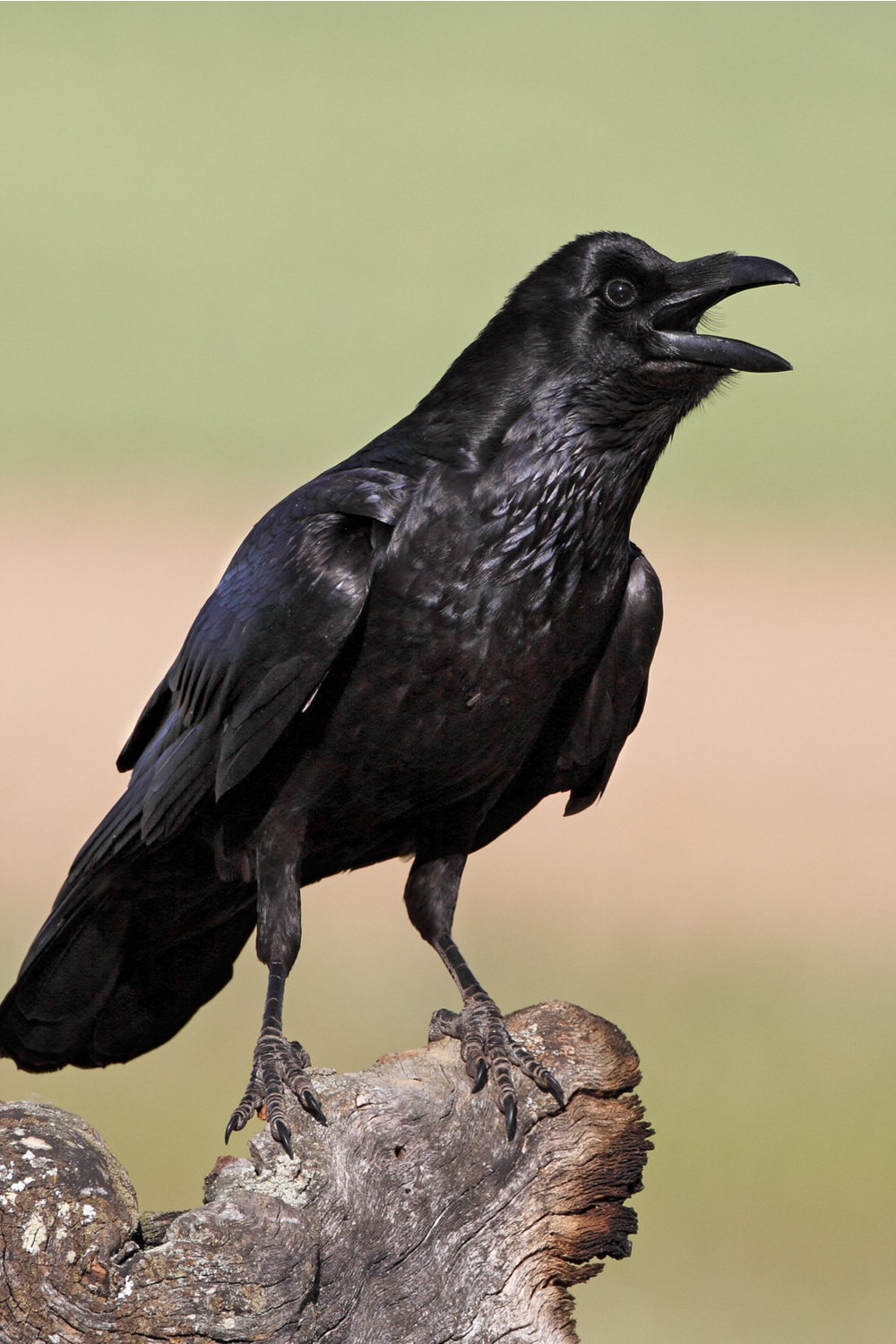 One of the features we most closely associate with birds is their beautiful song. But you won’t get any of that with a crow! Instead, their cawing can sound harsh and discordant. So what does it mean if you’ve heard that sound?

Just as with sightings of crows, the meaning traditionally depends on the number. A single cawing crow is held to be an augur of bad news, while two herald good tidings. Three cawing crows are considered a sign of good health, four of riches and five of bad news or illness.

A larger group of cawing crows is sometimes seen as a message of a future death. But remember – this need not refer to physical death. It could also be interpreted as the ending of one phase of life and the beginning of something new.

6. A Crow Landing on or Striking Your Head

A crow landing on or striking your head falls squarely into the category of “unusual occurrence”! So if this has happened to you, chances are you’re considering what it could mean.

Some people interpret this as a sign of negative karma. Is it possible that you’ve harmed someone in some way? It may be that this person is harboring resentment towards you. And you may yourself be carrying feelings of guilt.

If this chimes with you, the crow could be prompting you to reflect on your actions. Why did you behave the way you did, and what have you learned from the experience? Do you need to clear the air with the person you’ve wronged? Or better yet, apologise to them?

No matter how uncomfortable this could be in the moment, the benefits to your longer-term wellbeing will be far greater.

Not all crow-related encounters involve the whole bird. Perhaps you’ve come across evidence of its presence in the form of feathers.

Crow’s feathers are symbolic of balance. They are also the means by which the crow takes flight, offering freedom and a fresh perspective.

Seeing a crow feather can be interpreted as a message to reflect on these qualities yourself. Are you taking a balanced approach to your circumstances, looking truthfully at both the positive and negative aspects?

Just as in cases of seeing a crow flying overhead, this can be a message to re-examine your approach. Is it possible to see your situation in a different way? And could you respond differently to get a better result?

8. A Crow Staring at You 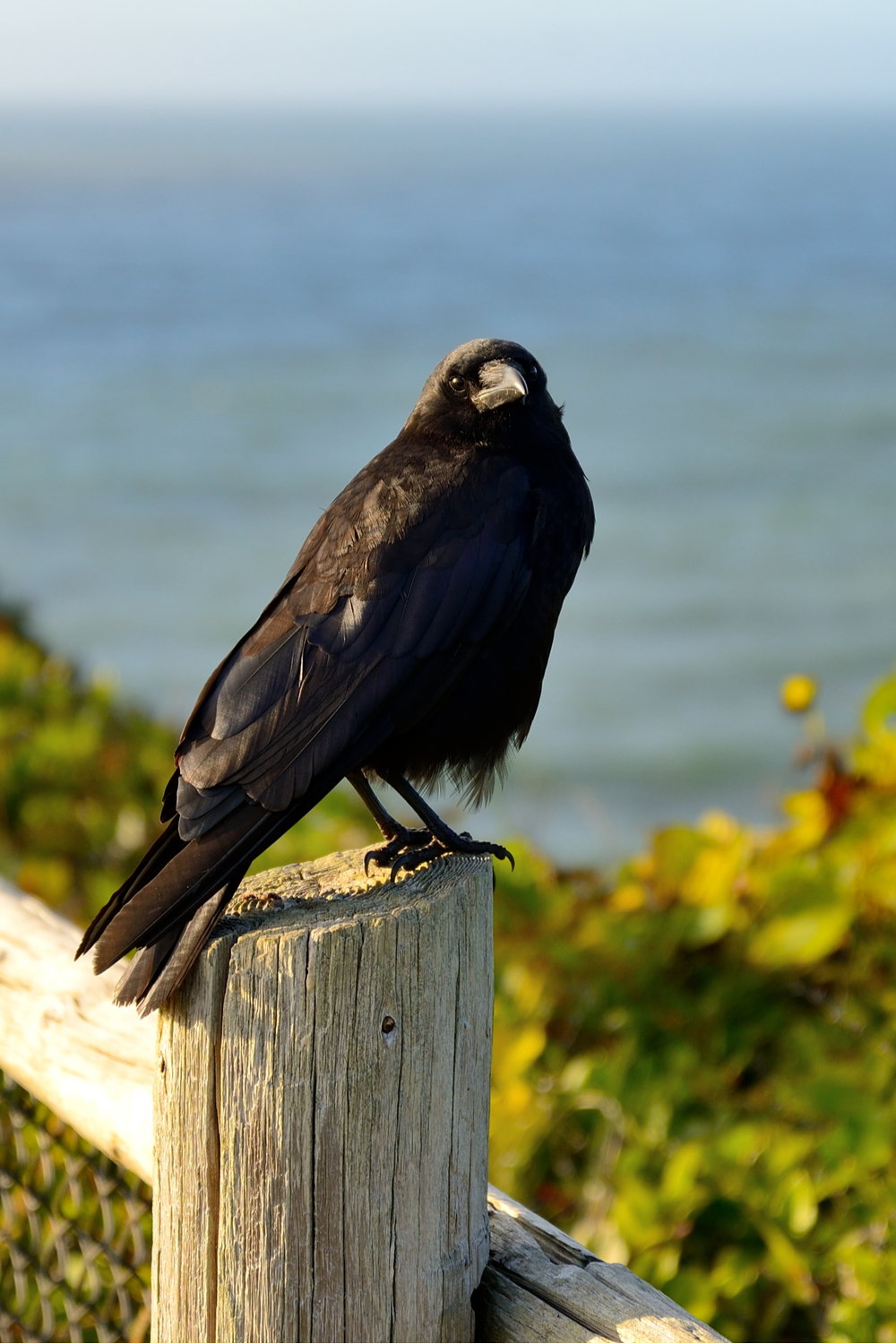 A crow staring at you for some time can be quite an unsettling experience. But it’s thought to carry a positive meaning.

As with any wild animal, crows act on their instincts. A crow that’s examining you closely is doing so because it finds you interesting. That could be because it recognises psychic or spiritual qualities that are uncommon amongst most people.

Some people believe that crows can see spirits. For them, a staring crow could be a sign that you’re accompanied by someone from the spirit world, perhaps a loved one who has recently passed on.

9. A Crow Following You

A crow following you is thought to have a similar meaning to being stared at by a crow. In other words, the crow has recognised some special quality in you – particularly psychic abilities.

In this case, though, the meaning is even more intense. You’re so interesting to the crow that they want to stay with you, even when you move away.

Encounters of this kind could be a sign that you have a powerful psychic gift. Or it may signify that the crow is your spirit animal, staying close to offer guidance and protection.

10. A Crow Alighting on Your Car

If you were in your car when you saw a crow, this can have a particular meaning. And it’s more likely to be significant if the crow actually landed on your vehicle.

Encounters with animals while you’re in your car are often interpreted as a metaphor for the direction of your life. In this case, the crow may be inviting you to consider how much control you really have. Are you in the driving seat of your life? If not, what could you do to take back control?

Crows as Messengers, Omens and Guides

That brings us to the end of our look at the spiritual meaning of crows. We hope it’s helped you learn more about the different interpretations attributed to their appearance in our lives.

But identifying what message your encounter with a crow may have for your own life is a very personal thing. Think through the details of what happened, and remember the emotions you felt at the time. They can be a powerful guide to finding the right interpretation.

Good luck with your investigation! 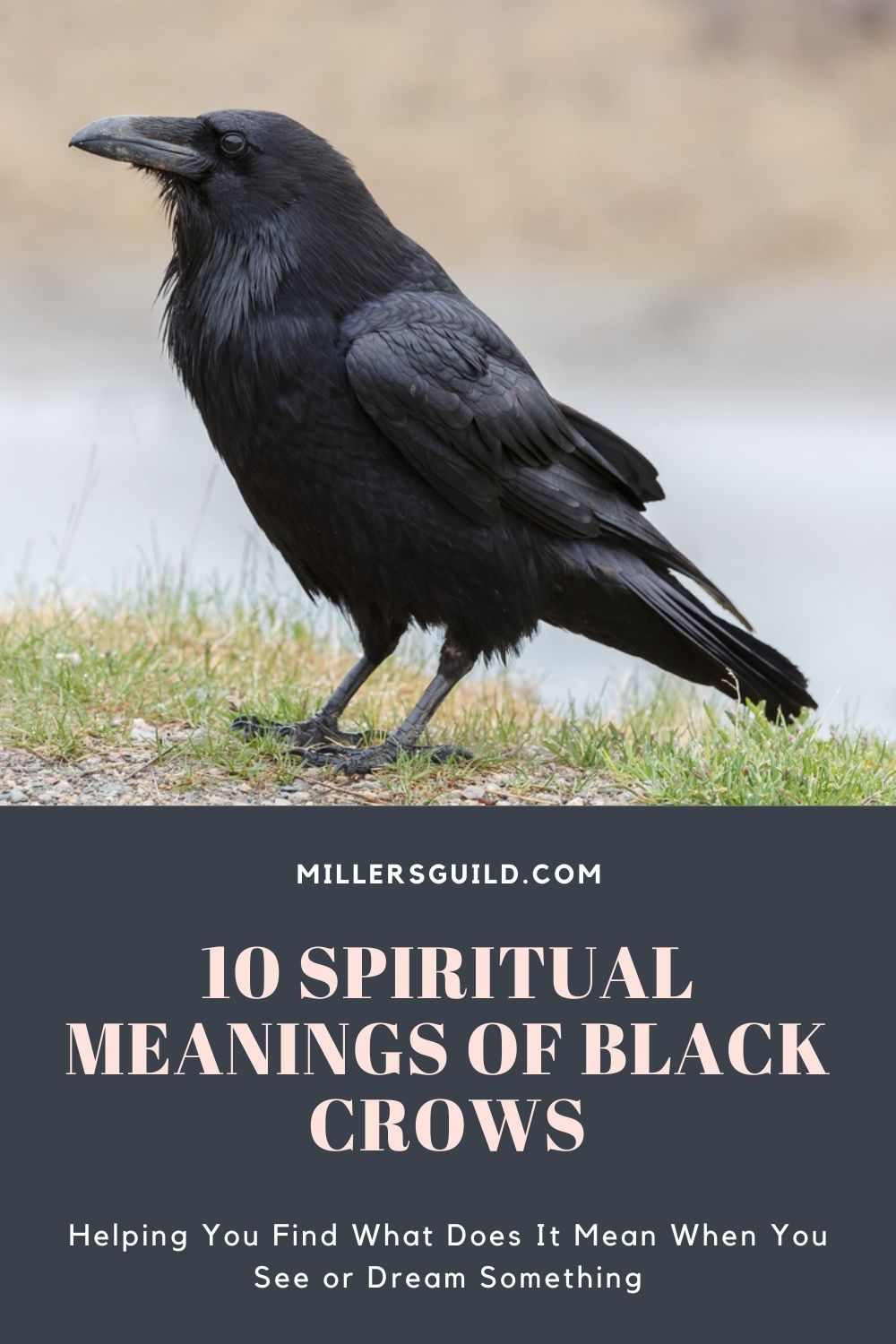