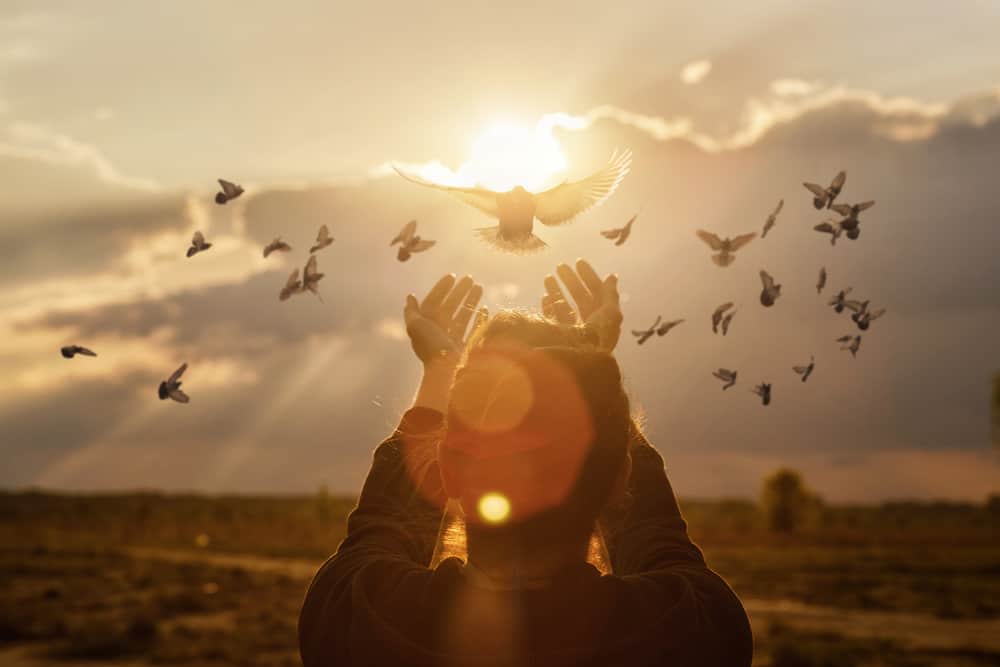 Doves are beautiful, graceful birds, and when you see one, it never fails to leave a deep impression.

They are also powerful symbols that have appeared in the art and traditions of countless cultures around the world, so for anyone who wants to know more, in this post, we discuss dove symbolism as well as what it means if you see a dove in a dream or in real life. 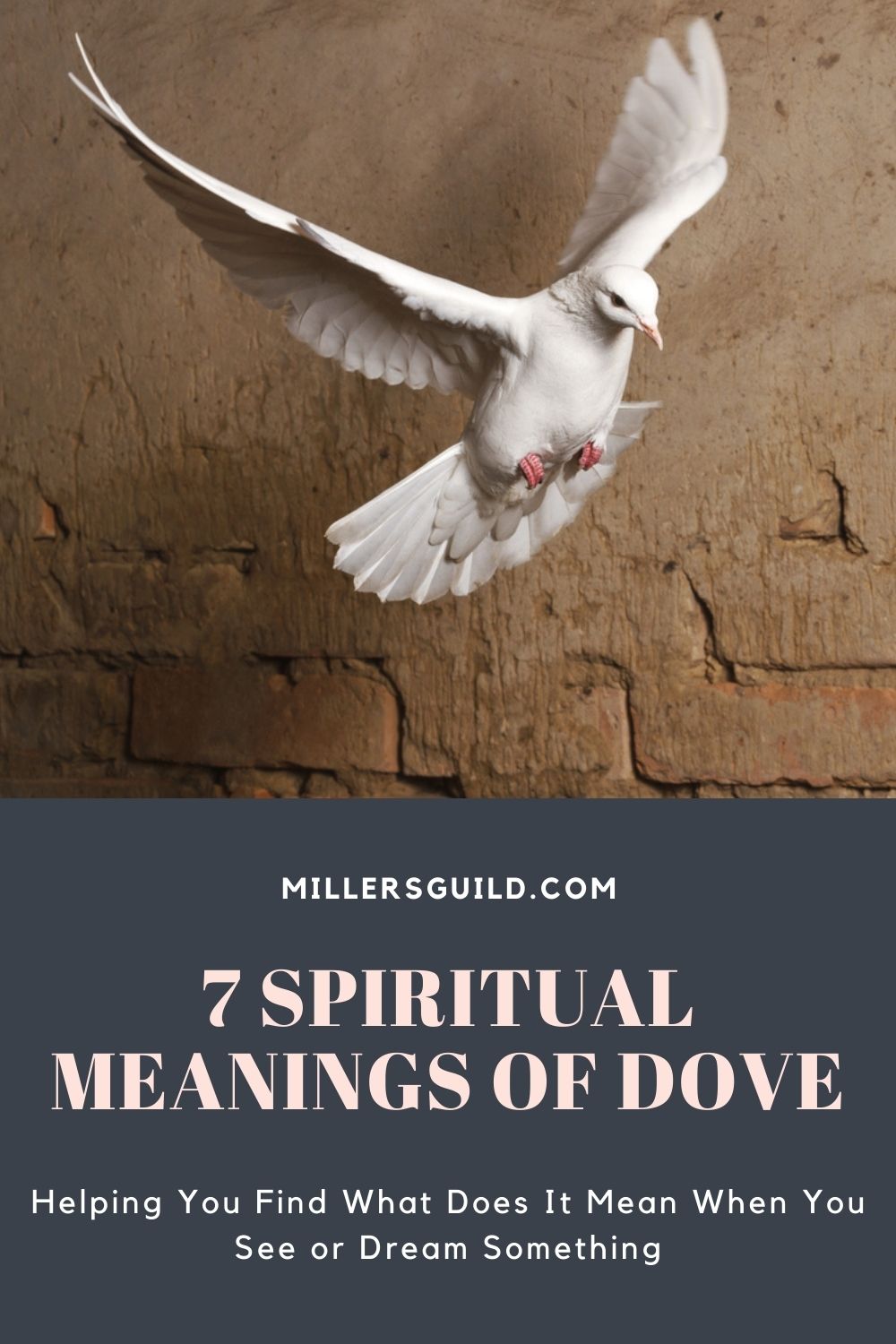 what does a dove symbolize?

Before we look at the symbolism of doves according to various religions and cultures around the world, let’s take a moment to think about the characteristics of doves and the associations they have.

Doves and pigeons belong to the same family of birds, and the difference between the two is not clearly defined. However, when most people think of a dove, they probably picture a gentle, graceful white bird.

This white color has meant that doves are often associated with purity and peace – an association that, as we will see in a moment, is inextricably linked to the appearance of a dove in the book of Genesis and the story of Noah’s Ark.

Doves were almost certainly the first birds ever to be domesticated, something that probably occurred thousands of years ago in the region that is now the Middle East.

At that time, they were used to carry messages, which has continued until modern times, meaning they have long been thought of as messengers.

Finally, another important characteristic of doves is that they mate for life, and doves often seem to be particularly caring and affectionate toward their mate as well as highly devoted to their offspring.

As a result, they are often seen as representing love, faithfulness and devotion to one’s family.

Dove symbolism according to different cultures and religions 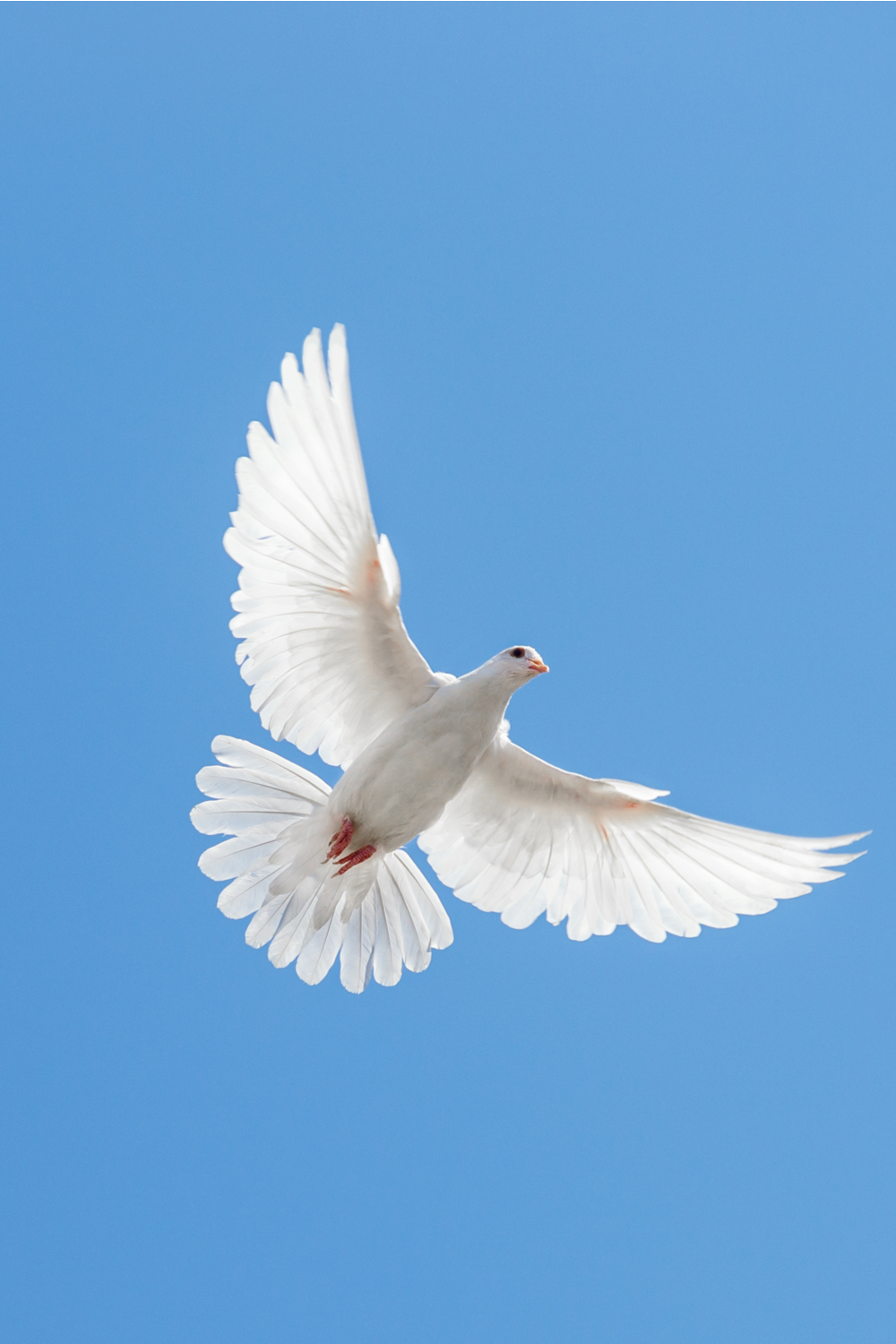 Doves are common all over the world, so it’s unsurprising that such a striking bird has featured in the mythologies and beliefs of many different cultures – so let’s look at that now.

The dove is an almost universal symbol of peace, along with the olive branch, and this derives from the story of Noah and his Ark in the Biblical book of Genesis.

According to the story, Noah sent out a raven from the Ark to see if it could find land. However, the raven never came back.

Next, Noah sent out a dove, which flew off and then came back with a freshly picked olive branch in its beak. This showed that land was nearby, that the flood had abated and that God was ready to permit men to live upon the Earth once again.

In early Christian art, the dove was most commonly used as a symbol of the peace of the soul, but later it came to represent civil peace instead.

Before the conversion of the Roman emperor Constantine and the end of the persecution of Christians by the Romans, the dove also symbolized piety and devotion to God despite oppression by the Roman state.

However, it is the image of the white dove and the olive branch representing peace that has proved to be the most enduring symbol and that is now most prevalent and influential.

A dove also appears in the New Testament after Jesus’ baptism. When Jesus emerges from the river, the Spirit of God descends to him in the form of a white dove, so for Christians, the dove is also a symbol of the Holy Spirit.

Judaism shares the story of Noah and his Ark with Christianity, and the dove is seen as a symbol of the rebirth of life after the flood.

Additionally, in the Talmud, God’s spirit hovering over water is compared to a dove hovering over her young, and Judaism also talks of the Palace of the Bird’s Nest, sometimes described as being like a dovecote, as being the dwelling place of the Messiah’s soul before his coming.

According to Islamic belief, when the Prophet Muhammed was trying to escape from his enemies, he hid in a cave. After he went in, a dove quickly laid eggs in her nest and a spider spun a web across the entrance.

This way, when his enemies saw the web and the undisturbed nest, they thought that Muhammed could not have gone inside and so moved on without searching.

The Hindu god of death Yama is often seen carrying owls and doves as his messengers, and the goddess Parvati, the wife of Shiva, is also associated with doves.

Kamadeva, the god of love and desire is also often depicted riding a dove.

The Mesopotamian goddess of love, sexuality and war, Inanna-Ishtar, was closely associated with doves, and figurines of doves have been found at her temples. It is curious that doves have so often been associated with love and romance across so many cultures.

Fascinatingly, according to the Mesopotamian Epic of Gilgamesh, doves and ravens appear in a story of a great flood that closely echoes the Biblical story of Noah’s Ark.

In this version, Utnapishtim sends out a dove from his ark first, but it only circles around and comes back. After this, the raven is sent out and doesn’t come back, which leads Utnapishtim to surmise that the raven has found land.

Many Native American tribes have noted the dove’s tendency to mate for life and their devotion to one another, so doves have come to symbolize monogamy and enduring love. They are also associated with fertility.

However, other tribes have different beliefs about doves. To the Blackfoot people, doves are sacred and are thought to protect Blackfoot warriors, bringing them home safely after battle.

Others appreciate the peaceful, gentle nature of doves, and the Cheyenne people have a saying that “if a man can be as wise as a serpent, he can afford to be as gentle as a dove.”

For the Pueblo people, doves predict coming rains, but to the Algonquian tribes, a cooing turtledove foretells a death, making them less welcome visitors.

In Aztec symbolism, we find the dove representing love and fertility once again since they are associated with the goddess Xochiquetzal, the goddess of both.

Amazingly, Xochiquetzal is also connected to a great flood, so once again we see the dove in a story about a deluge in the distant past on a completely different continent.

To the Ancient Greeks, doves were associated with Aphrodite, the goddess of love. Doves also carried ambrosia, the drink of the gods, to Mount Olympus.

According to Japanese belief, Ōjin, the semi-mythical 15th emperor of Japan who was later deified as the spirit Hachiman, was accompanied by doves that served as his messengers. He was revered as the god of archery, war, fishing and agriculture.

In China, doves symbolize enduring love and faithfulness as well as springtime. They are sometimes also seen as a symbol of longevity.

According to Celtic beliefs, doves represent healing. The flight patterns of doves and other birds were also observed as a way to predict the future, and sometimes, doves were used in sacrificial rituals.

So we’ve looked at the traditional symbolism doves have had around the world through the ages, but what are they used to symbolize today?

Nowadays, the dove motif, often holding an olive branch in its beak, is recognized everywhere as a symbol of peace. It appears in political cartoons representing peace and is also seen on a wide range of flags and logos to represent peace and opposition to war.

This symbolism comes from the Biblical story, and the expression “to hold out an olive branch” has also come to mean “to offer peace” for the same reason.

What does it mean if you see a dove? 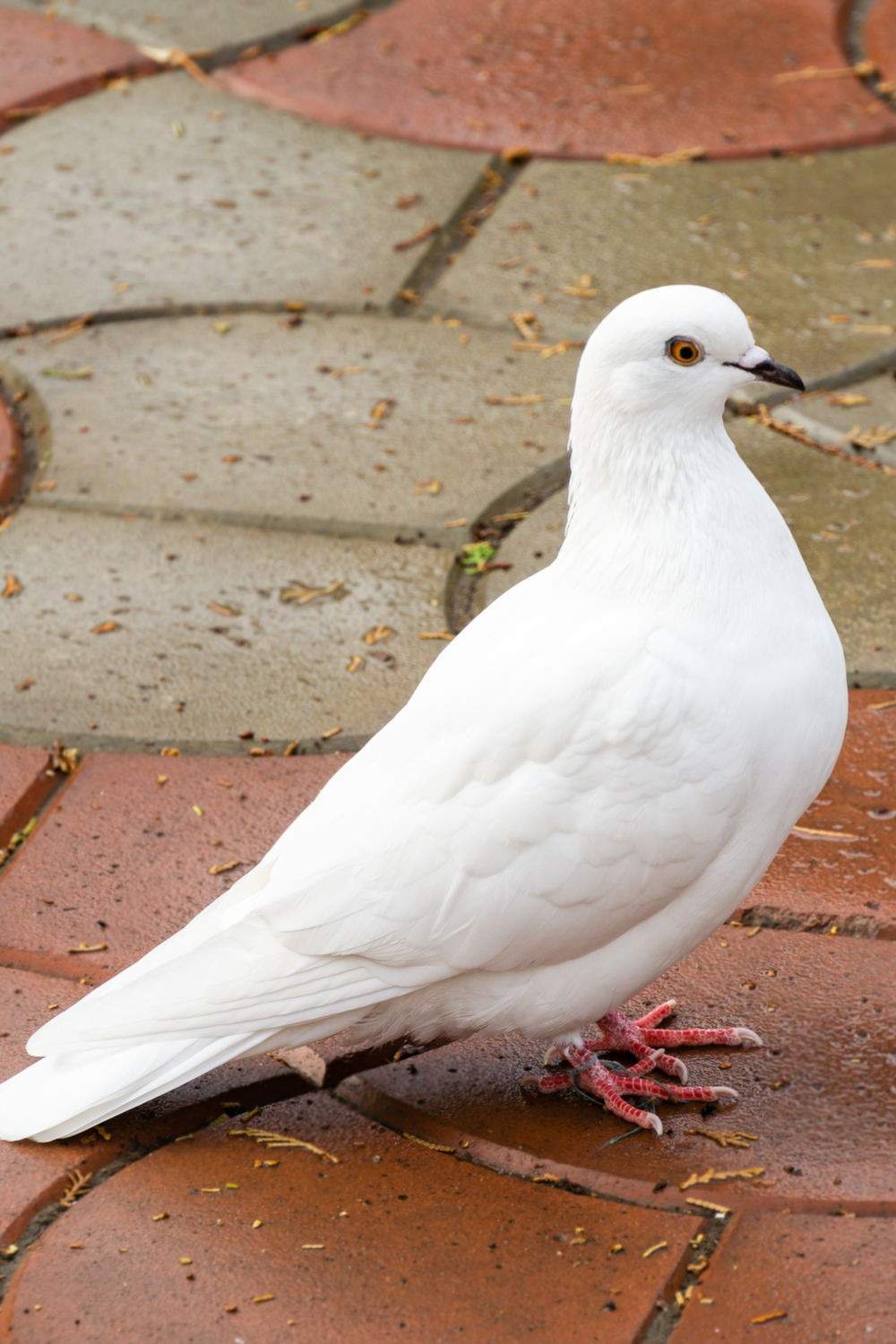 The symbolism of doves around the world includes peace, purity, enduring love, faithfulness and more, but what does it mean if you see a dove, either in a dream or in real life?

Seeing a dove can be a powerful spiritual message, but to understand what it means, you need to reflect deeply and search within yourself to interpret the sign correctly.

You need to think about what was happening when you saw the dove, what the specific circumstances were, how you were feeling and what issues and problems you are facing in your life.

Then, by using your intuition, you will be able to find out what seeing a dove means to you.

Here are some of the most common meanings that seeing a dove can have.

1. Make peace with someone

As we have seen, doves usually symbolize peace and unity, so if you see one, either in real life or in a dream, the meaning could be that you need to make peace with someone.

Is there someone in your life you have been fighting with? Is there a relationship that needs mending? Then seeing a dove could tell you that now is the right time to patch things up rather than letting the situation fester.

Doves represent enduring love and faithfulness, so seeing one could be an indication that your relationship is strong.

Perhaps you find yourself doubting your partner, and a dove can remind you that you should trust them more. If you are always jealous and watching what your partner does, your relationship can never develop properly.

Instead, learn to believe in your partner to allow your relationship to flourish.

3. Don’t be tempted to be unfaithful

Seeing a pair of doves is usually a message about love and relationships. If you are already in a relationship, then this message should reassure you that all is well.

On the other hand, if you are single and searching for love, this message may tell you that your search will soon be over because your soulmate is about to appear.

With their beautiful white plumage, doves are considered pure and close to the divine, so seeing one can be an indication that you need to make more time for the spiritual side of your life.

Are you too consumed with the day-to-day hustle of the material world? Then perhaps now is the time to step back and ensure you don’t neglect your spiritual development.

In many cultures, doves represent healing, so seeing one may be a message that now is the time to heal.

Did something happen to you in the past that is still causing you grief or sadness? Are you still clinging to the past, even though you know it is making you unhappy?

If this is the case, a dove can be a message telling you that you need to let go of the past to allow yourself to heal – because that is the only way for you to emerge stronger and happier in the future.

Birds of all kinds can bring messages of freedom and independence, and doves are no exception.

Or perhaps you are stifling somebody else, maybe a partner, a family member or a friend? In that case, this message is telling you that you need to let them have their freedom too because you are not giving them the space they need.

An enduring symbol of love, peace and purity

Doves have become one of the most recognizable symbols of peace around the world, but they are also known as a symbol of purity, love and more.

If you see a dove, either in real life or in a dream, there can be many interpretations. However, through calmness, deep thought and meditation, you will be able to discover what seeing a dove means to you. 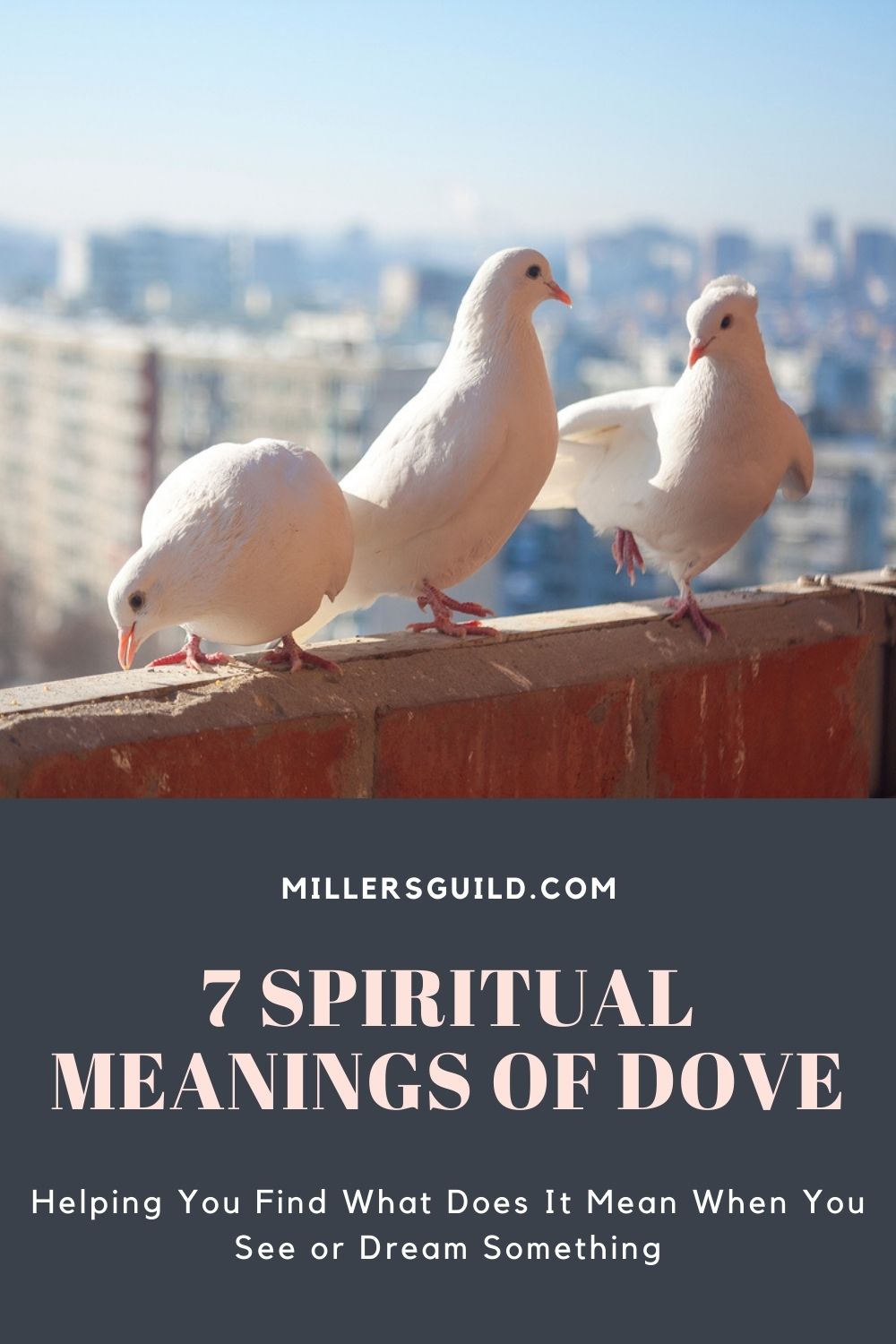