Dragon spirit animal is one of the most ancient and powerful totems. These magical creatures are formidable and symbolize a range of traits and emotions.

For starters, dragons are messengers of magic.

So, without any delay, we’d like to invite you to delve deeper into the ‘magical realm of dragons’ through this post, where you’ll get to know not only the symbolisms a dragon represents but also its totem, omen, tattoo meaning, and even some common dream interpretations. Let’s begin! 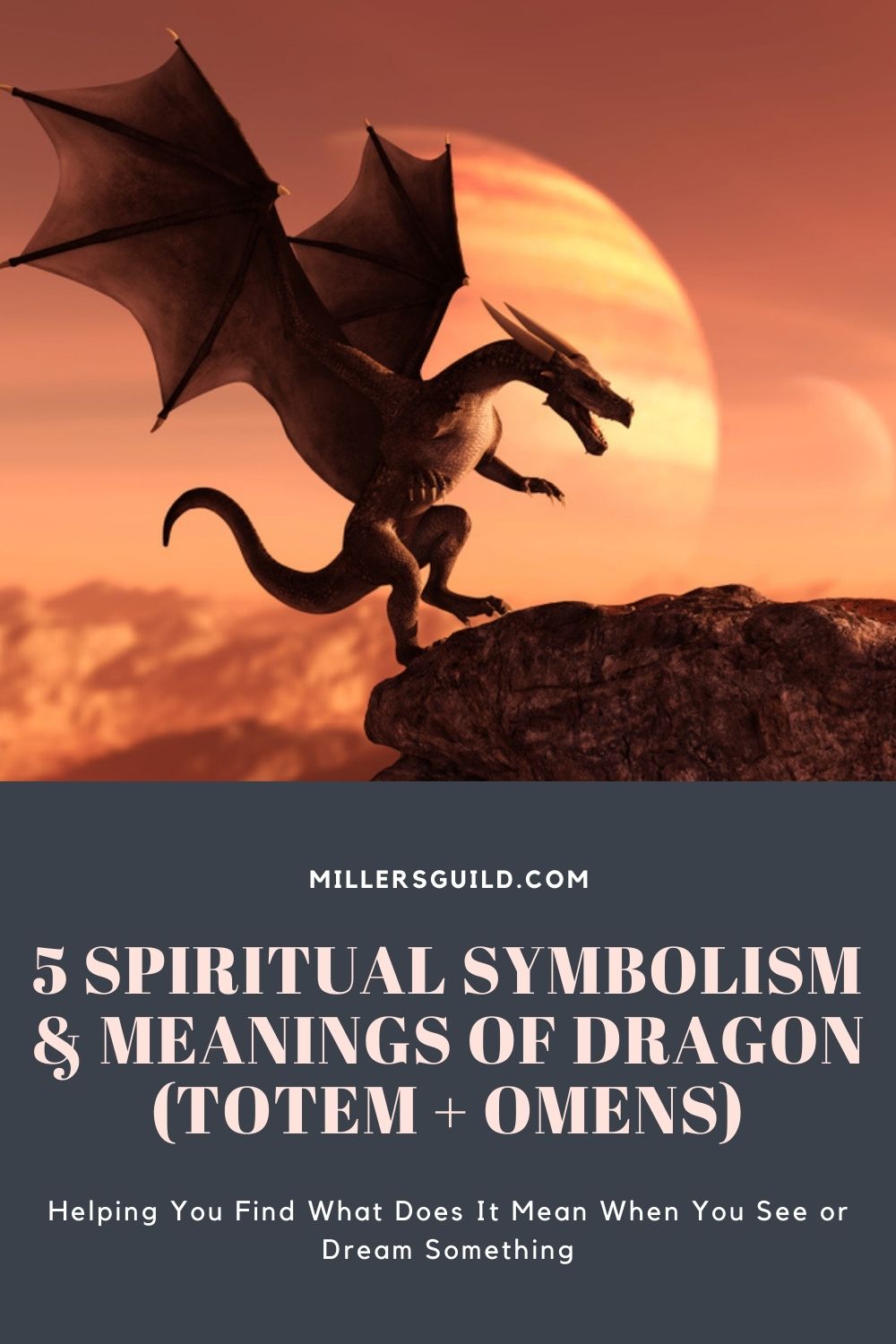 What Does Dragon Symbolize?

Dragons are known as all-knowing beings with phenomenal, magical capabilities. They are also trustworthy protectors and guides. Likewise, they are also believed to rule four elements; Water, Air, Fire, and Earth.

Dragons also represent beautiful harmony and balance and are the harbingers of good fortune. And by the looks of dragon alone, how formidable it is, it’s is no surprise that they symbolize power and bravery. Now, let’s discuss these meanings in detail.

Dragons are fire-breathing mystical beings. These look like a large-serpent and have two huge wings to soar high in the sky. In legends and folklores of many countries, dragons are always associated with magic.

Many believe that whenever you’re going to face your adversaries, it’s always best to summon dragon spirit animals and have their guidance and blessing by your side. You’ll feel magical protection and fueled self-confidence to win anything in life.

Though dragons look fierce and evil, you have to remember that they’re not your enemy and will help you overcome your troubles instead. Dragons are believed to act as spiritual guardians who teach good lessons to those who mean you harm.

Dragons are also symbolized for their intelligence and all-knowing ability and are believed to guide people with brilliance, dignity, and authority towards enlightenment. Dragon spirit animal teaches you to find your inner voice and power, be free, and roar.

In Feng Shui, dragons represent luck, good fortune, and growth. There are many dream settings in which seeing a dragon is considered an omen of luck and wealth.

Dragons are also symbolized harmony and balance. Dragons are protective and intelligent animals and are believed to make those with toxic intentions quiver out of fear. These formidable creatures do not take it lightly when somebody tries to take advantage of innocent and pure-souled beings.

Dragons are symbolized for their goodness, but they are also symbolized for evils and sins they commit when fighting the foes. So, they are considered to represent a harmonious balance between good and evil.

Dragons are believed to have mastered the four elements. To be precise, there are four types of dragons named after these elements.

Fire dragon spirit animal fuels your self-mastery and creativity and helps you overcome the hurdles in your life. It offers you protection and guidance, and at the same time, encourages you to transform and be a leader.

Air dragon spirit animal enhances your acumen and widens your perspective of world view. It encourages you to trust your instincts and embrace changes rather than feeling threatened by them.

In China, dragons were symbolized as the spirit of water and were associated with Rain Gods. Water dragons give you the courage to heal your past and attain an emotional balance. It reminds you to refrain from any toxic patterns and embrace your fate in life.

Earth dragon spirit animal helps you stabilize your vibrations and provides you with the mindset and self-confidence to live abundantly.

A few Native American tribes had folklores about a dragon-like creature, the thunder lizard. They symbolized them as creators, as they believed they played a role in the creation of Earth and on it the Native Americans.

Also, Native Americans viewed dragons as serpents instead of formidable fire-breathing creatures that the rest of the world believes.

Among Celts, red dragons are associated with their leaders and are believed to symbolize their right to power.

Celts warriors also had dragon emblems, which represented power, triumph, and royalty. And, the red dragon on Wales’ flag is adorned with the roughly translated motto ‘the red dragon lead us’.

Ancient Celts also considered dragons as seers with unparalleled wisdom and believed that seeing a dragon was an omen of abundant harvest and good health.

However, in many parts of Europe, dragons are symbolized as evil reptilian monsters. Also, in the literature, dragons are portrayed as evil characters determined to stop heroes from achieving their goals.

China has a lot of legends and mythologies relating to dragons. In fact, dragons in China are one of the most known symbols. Ancient China associated dragons with the spirit of water, good when benevolent, and floods during hostility.

Likewise, there’s a prevalent notion in China that the sky is divided into nine palaces. And, each of these sky palaces is believed to have a dragon as an emperor. Similarly, other Eastern countries, such as Vietnam and Japan, symbolize dragons for their power, rule, and authority.

Like in China, dragons were considered to rule over water bodies in Egypt. When happy and benevolent, they believed dragons made it rain and fertilized their crops, but when aggressive, dragons were thought to cause flood and catastrophe.

Africans also associated dragons with water. Moreover, some African tribes believed that a huge serpent swallowed the moon to cause an eclipse. On the other hand, African Americans in America symbolized dragons for their power and strength.

The Bible has something else to say about dragons. Dragons are adversaries of gods, the ruler of hell, the devil that eats devours god’s beloved animals, including humans. They destroy all the good in the world and foster and control evils and wars.

Dragons are considered the owner of the false prophet in the Bible and are depicted as selfish creatures. Likewise, Christianity symbolizes dragons for their power.

When To Summon Your Dragon Spirit Animal

Similarly, if you’re craving for wisdom and knowledge and want to exude formidable power from within you, you should call on your dragon spirit animal. Doing so will also help you acquire wealth and manage and protect your empire.

Moreover, a dragon spirit animal also helps detoxify your surrounding and protect you from evil and toxic influences in your life.

How To Connect With Your Dragon Spirit Animal

It is imperative to solidify your connection to dragons if you wish to have their blessings and guidance with you. You can start by collecting dragon images that are close to your heart and keep them readily available such that you can have a glance at them whenever you want to connect with them.

It would be best if you also meditated with a dragon spirit animal in your mind. If you love art, sketching a dragon also helps strengthen the bond; if not, just journal about dragons in your diary.

Also, in order to befriend dragons, it is imperative you learn everything about them and widen your perspective. Feel free to let your imagination flow like water, without any limitations, and go where it takes you. Imagine dragons and try to connect with them.

Native Americans believe that dragons transformed themselves from a snake to a great mighty creatures.

Likewise, many other civilizations consider dragons to be excellent at transforming. So, those under the dragon totem are able to better themselves to the best version they can ever be. They also believe in the power of healing and strive to liberate themselves.

Undoubtedly, people guided by dragon totems are fierce and protective. However, it would be best for them to redirect the fierceness to only the goodness in life, rather than using it for negativity and destruction.

On the downside, dragon totems can make you vain and overconfident if you don’t keep yourself grounded. Don’t let your ego blind your perception, and don’t use dragon totem energy on something silly and trivial.

Dragons are considered omens of luck and good fortune. Many civilizations believe them to be harbingers of wealth and abundance in life, while many associate them with water bodies and rain. They are also omens of power, bravery, transformation, and sky to many.

1. Dreaming of yourself being transformed into a dragon:

If you saw a dream where you transformed into a dragon, well, congratulations. It is a good omen and means that you’re in control of your life at the moment. You know how to perceive things and behave accordingly.

Likewise, it also indicates that your communication skill is great, and you can lead people effectively and get things done.

2. Dreaming of killing a dragon:

Killing a dragon in the dream indicates that you’re feeling resentment in your waking life. You’re feeling hostile and stressed and aren’t able to cope up with everything that’s happening around you.

So, you’re acting in an uncontrolled way. This dream signals you to take a moment, be rational about everything, and keep your behavior in check before it becomes uncontrollable.

If you dream of flying dragons, it means that after all the hardships, it’s time for you to feel happy and content finally. It indicates that you’re on the right track in your life, and you’ll accomplish your goals or a milestone soon in your real life.

4. Dreaming of being attacked by dragons:

Suppose you’re struggling emotionally, or there’s some stressful situation going on in your personal or professional life. In that case, it is understandable if you’re dreaming of being attacked by a dragon time and again.

If a dragon attacks you in the dream, it is signaling you to address your hidden anxieties instead of running away from them.

5. Dreaming of riding a dragon:

Dreaming of riding a dragon represents the authority you’re willing to take back in your waking life. You want to take control back of your life and control anger instead of letting it control you. You’re ready to face all the obstacles now, from which you’ve been running away for a long time.

6. Dreaming of a dragon spreading its wings:

Dragons spreading their wings in the dream means that it is ready to embrace you and guide you to the rightful way.

This dream is an extremely good omen and tells you not to worry much as you’ve been granted the protection of a dragon. It’s also a sign of good fortune, and you will indeed feel many good things unboxing themselves in your life soon.

The meaning of dragon tattoos varies with country and civilization. In China, where dragons are talked about a lot, a dragon tattoo can symbolize many things, including protection, good fortune, wisdom, and power.

Dragons are often portrayed as evil characters in the movie and in many legends. But now you know how these mighty mythological creatures have hidden goodness in them, don’t you? They are indeed fierce and hostile, but to only those with negative intentions to those who they seek to protect.

So, if you felt resonated with this mystical animal lately and are trying to learn more about them, we hope this comprehensive guide has answered all your questions. If you have any queries, we’re all ears! 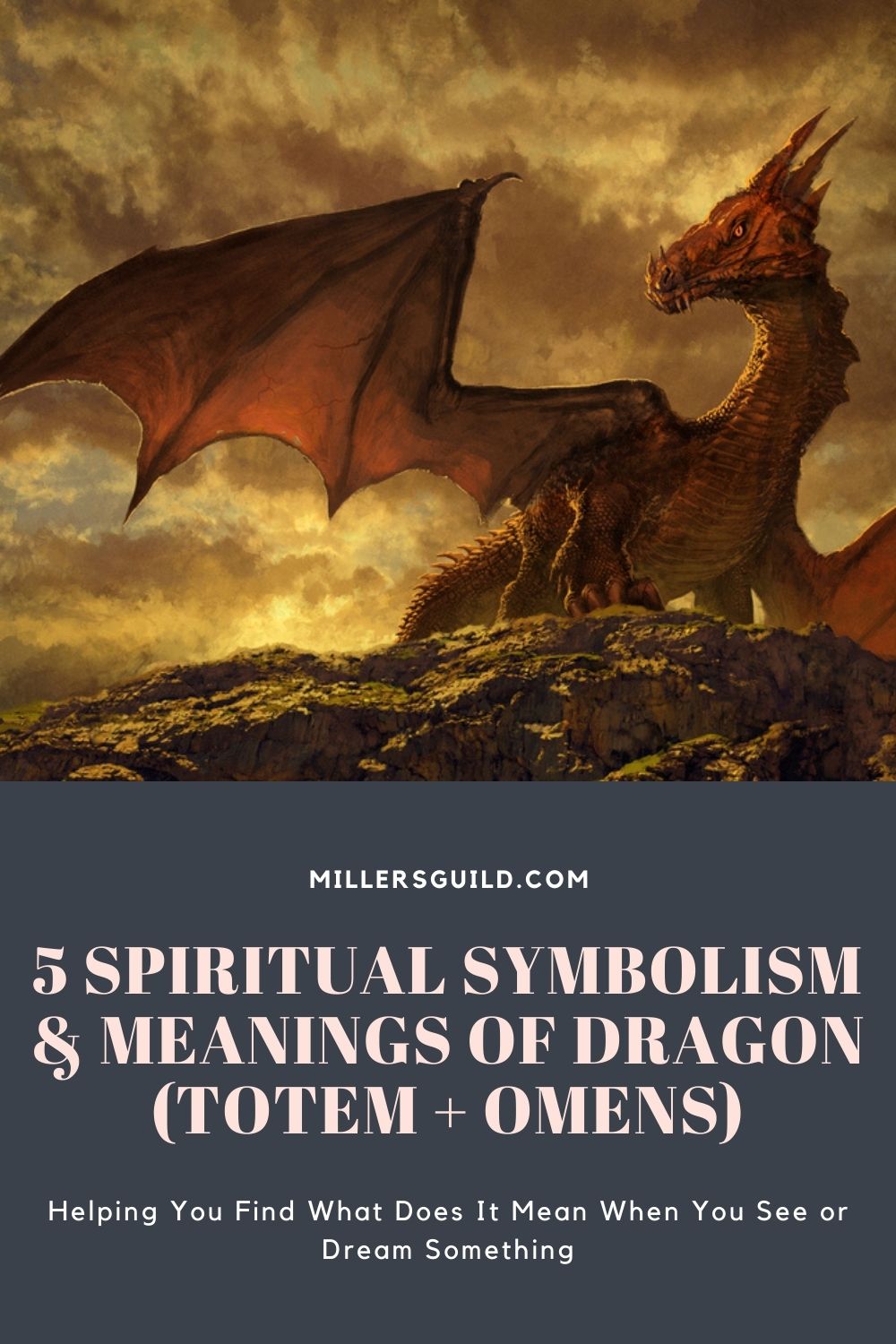