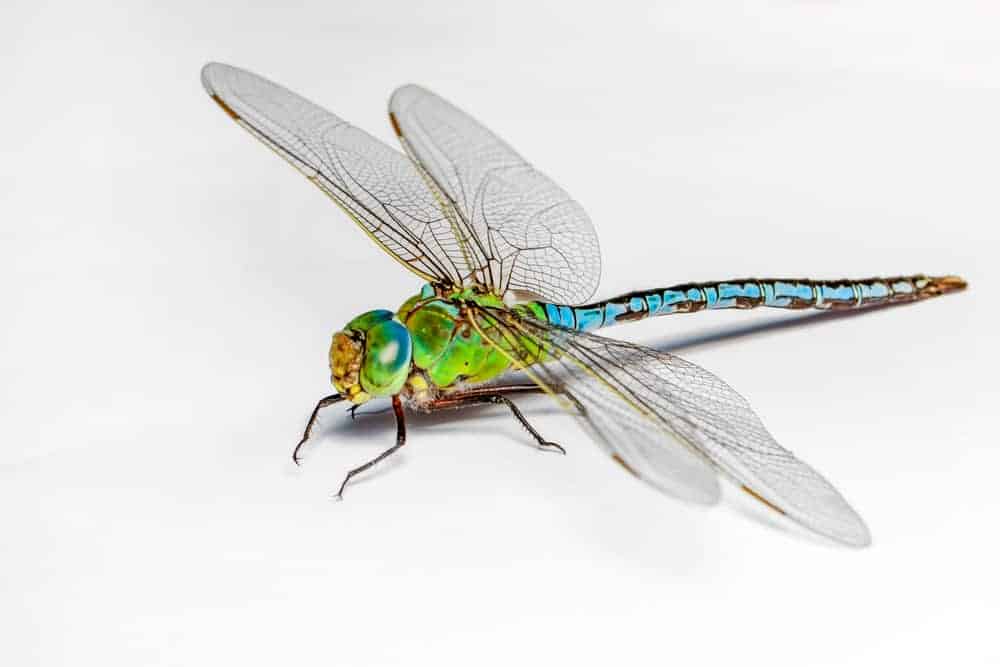 With their light, transparent wings, their shiny, iridescent bodies and the agile grace of their movements, it’s no wonder that many people throughout the ages have seen these beautiful insects as being close to the spirit world.

In many cultures, dragonflies have come to symbolize qualities such as transformation, freedom, speed and more, so to help you understand what they signify and what they represent, in this post, we talk about dragonfly symbolism and what it means if you see one. 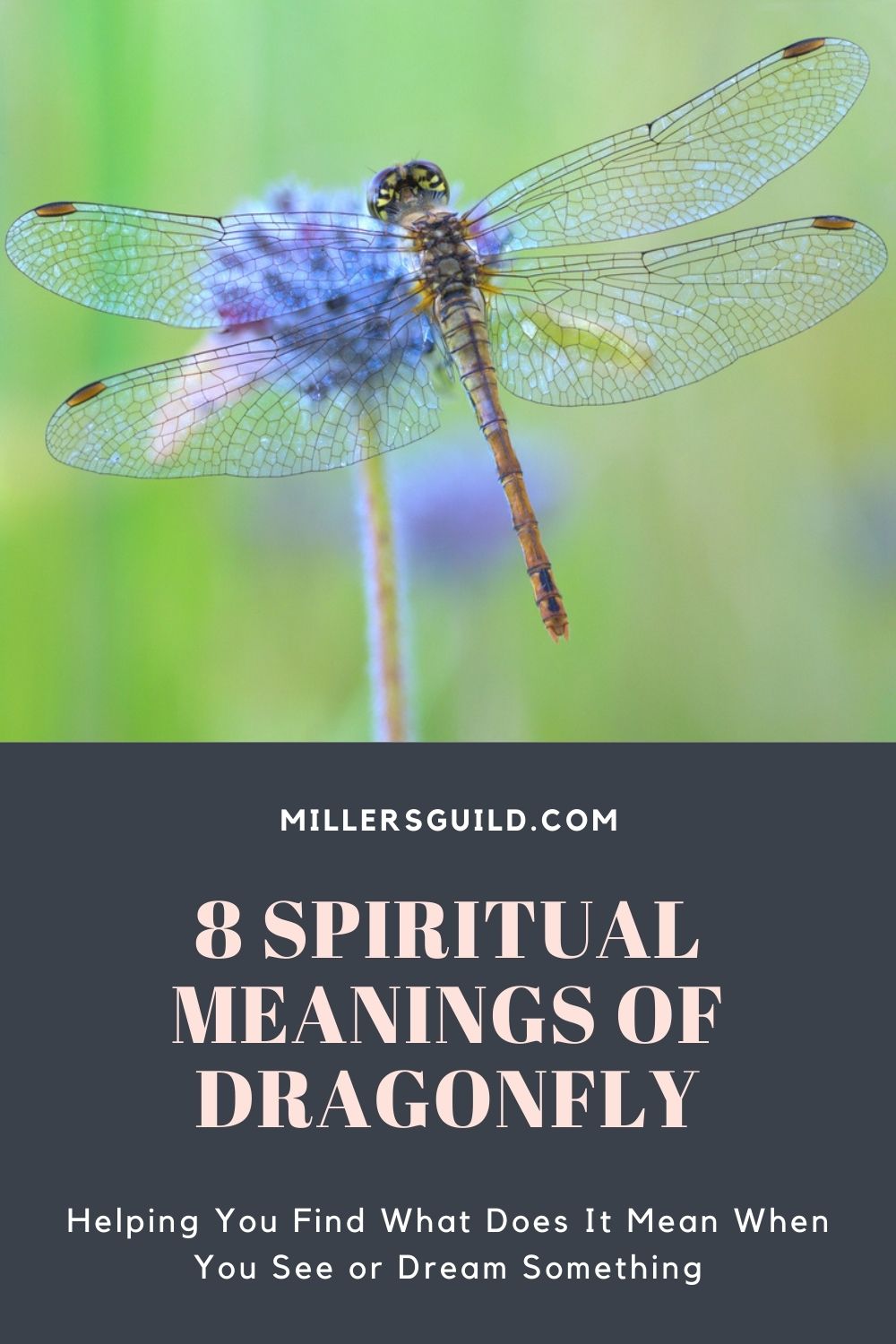 The Characteristics of dragonflies

Let’s start by looking at some of the characteristics of dragonflies that have helped create the symbolism people have attributed to them.

Everyone knows dragonflies as elegant, delicate creatures they skip and skim across the water, with their bodies changing color in the light. For this reason, we see them as mysterious, even magical animals that are close to the world of fairies.

However, dragonflies are born underwater and spend the majority of their lives in the larval phase.

They only emerge as dragonflies as the final act, after which they quickly die, which may remind us of the fragile, ephemeral nature of life but also of the need to make the most of our time on Earth and to make every moment count.

The fact that they change from larvae into beautiful dragonflies also means we associate them with change and transformation.

Finally, when they emerge as dragonflies, they are able to move quickly, changing direction in an instant, and this nimbleness and agility are also traits that are valued by many. 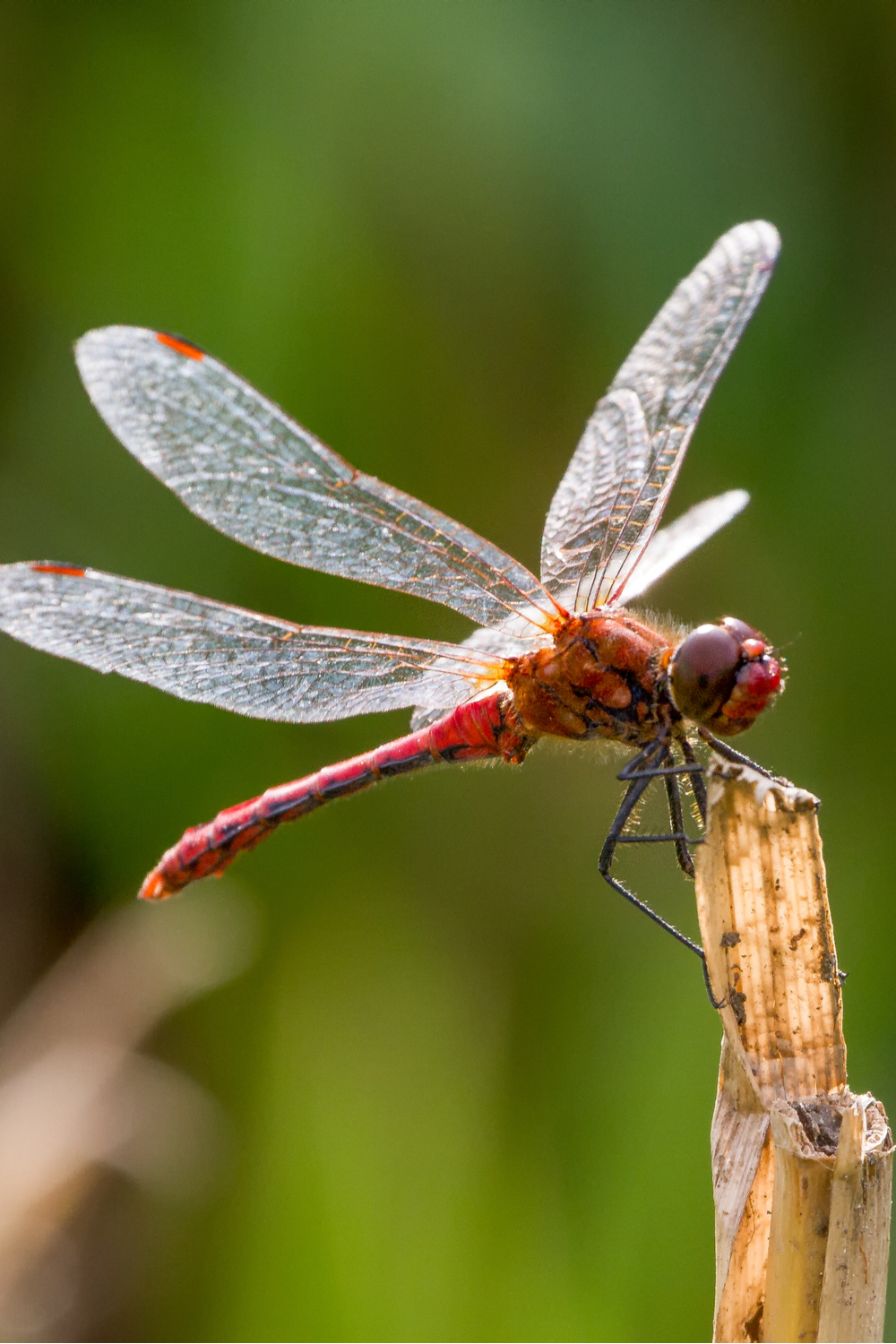 Dragonflies are found in many parts of the world, both in the Old World and the New, and is unsurprising that this beautiful and seemingly mystical creature has appeared in the mythology and traditions of a wide range of different cultures.

Let’s look at some of the ways dragonflies are seen in different parts of the world.

The dragonfly motif appears in the art of several Native American tribes, but the symbolism given to dragonflies varies.

Many tribes associate dragonflies with spring, rebirth and renewal, which probably comes from the way they emerge from the larval form as a beautiful and elegant flying insect.

The Navajo include dragonflies in their famous sand paintings as well as on pottery, and among other things, this is thought to help ensure the rains arrive on time.

However, for some other tribes, dragonflies have more negative connotations and are thought to have been sent by the devil. They are also known as snake doctors because they are thought to follow snakes around and heal them if they get injured.

Dragonflies are used in stories to frighten children into telling the truth – children are told that if they tell lies, dragonflies will come and sew their eyes, ears, noses and mouths shut.

For the Zuni, they are connected to the harvest. According to one story, when some Zuni people were forced to move on from an area in a hurry, they left two children behind.

To entertain themselves, the children made an insect doll from grass, and when the children began to go hungry, the doll flew away and brought back the god of corn, who made the land fertile and fed the children.

To thank the insect doll, the children made a second one as a companion. The offspring of these dolls became dragonflies, and this tale tells of why dragonflies are associated with fertile land.

Although the Celts don’t have stories about dragonflies, fairies feature prominently in their mythology, and with their elegant wings and iridescent bodies, it is easy to see a connection between dragonflies and fairies.

Dragonflies are an important symbol in Japanese culture and are a common theme in Japanese art. Among other things, they represent the transition from summer to winter.

Dragonflies were thought to be able to transport the souls of ancestors back for the summer feast of the dead, and the island of Honshu was also sometimes known as “Dragonfly Island”.

Samurai also valued the properties of dragonflies since they are able to fly straight, fast and true. For this reason, these insects often appeared emblazoned on both swords and arrows.

In China, dragonflies represent good luck, and they are also associated with love spells. However, sometimes they also carry connotations of unsteadiness.

According to Danish tradition, dragonflies have the ability to sew people’s eyes, noses, ears and mouths shut, which is uncannily close to the beliefs of some Native American tribes.

In Sweden, they are thought to be able to measure the purity of a person’s soul, telling you if there is evil inside.

Now let’s have a look at some of the other spiritual symbolism that can be attached to dragonflies.

Due to the metamorphosis that dragonflies undergo when they change from larvae to adults, they often symbolize change and transformation in much the same way as the butterfly does.

They can also symbolize adaptability since being able to change means you are better adapted to a new situation.

Discovering one’s true abilities and worth

When they emerge as colorful dragonflies, they finally show their true selves – and their true worth. For this reason, they can symbolize the discovery of one’s true talents, even if they have been hidden and unknown for a long time.

For similar reasons, dragonflies can symbolize fulfilling one’s potential – like a dragonfly that has remained hidden but now is revealing itself as the truly stunning insect that it is.

Importance of seizing the moment

Since dragonflies only live for a short time once they reach the adult phase, they symbolize the need to seize the moment and live in the present – because the time we have to do everything we want is really only vanishingly short.

Dragonflies have large, complex eyes that give near-360° vision. This means they often represent the ability to see beyond what we usually see or experience as humans, perhaps revealing the secrets of the spirit world that most of us fail to perceive.

The emergence of the dragonfly into the outside world can symbolize freedom – but it can also serve as a reminder that freedom is precious and may only be short-lived. 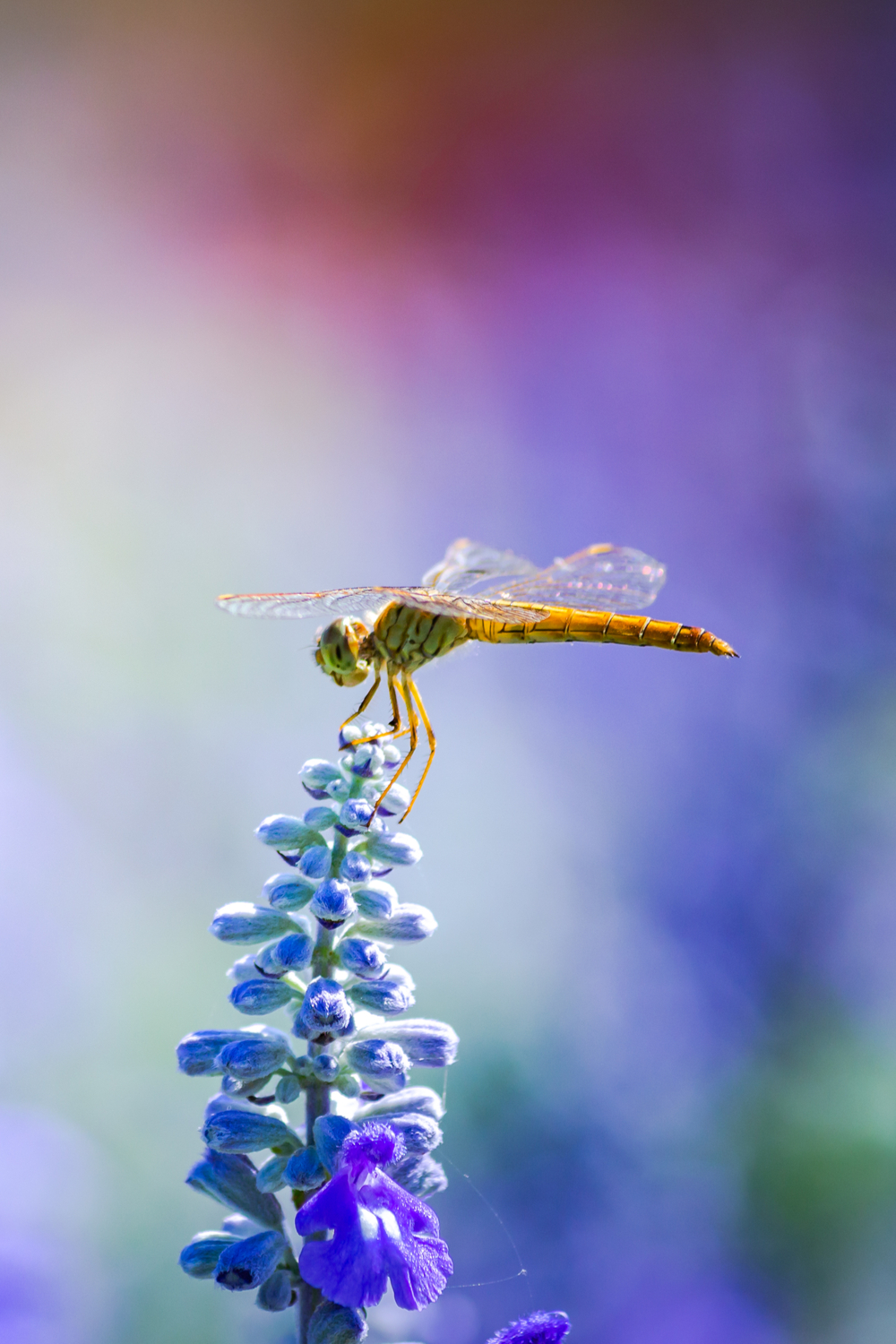 So we have looked at the symbolism dragonflies can have according to various cultures and traditions around the world, but what does it mean if you see one, either in your dreams or in real life?

Interpreting the meaning can depend on the details of where you saw the dragonfly, what color it was and what it was doing – but it can also depend on you and the issues you are going through in your life when you see it.

To understand what it means when you see a dragonfly, you need to search inside yourself through deep thought and meditation.

If you ask the right questions of yourself and allow yourself to be guided by your intuition, you will be able to discover the true meaning of what you saw.

Here are some of the common interpretations of what it means if you see a dragonfly.

1. Look within yourself to gain a deeper understanding of life

Just as the dragonfly’s eyes allow it to see in 360° vision, you should look around and within yourself to try to gain a deeper understanding of yourself, of life in general and your purpose in life.

If you have been too focused on material matters, perhaps now is the time to devote more time to the spiritual side of life, which will allow you to become happier and more fulfilled.

2. Search for your true talents and try to release them

We have seen how dragonflies can symbolize the unleashing of your true talents, so if you see a dragonfly, it may be a message urging you to release the talents you have hidden inside.

Perhaps you are not utilizing your natural abilities to the utmost, in which case they are being wasted. The dragonfly is a reminder that you should not let this happen.

3. Seize the moment and don’t hesitate

Dragonflies only live for a short time, so they have no time to waste – and when you see one, this can be the clear message you are being sent.

Is there anything you are putting off? Is there something you want to do but haven’t found the time to do it? Make sure you live for the moment and make your time count. Don’t waste your time because you won’t be able to get it back once it’s been lost.

4. Change is coming – or you should make a change

Dragonflies represent change and transition, so seeing one may mean change is on the way to you too.

Alternatively, seeing a dragonfly may be a message telling you that you need to make a change in your life. Is somebody around you creating negative energy? Is there something causing you stress or anguish?

5. Break free from illusions or limitations

A similar message could be that you are being constrained by your illusions or by certain limitations, and seeing a dragonfly could be urging you to cast these off to be able to live a fuller and more fulfilled life, both in the physical world and in the spiritual one.

When dragonflies emerge as adult insects, they finally reveal what they truly are, and the message of seeing a dragonfly may be that it’s time to express your true feelings or to reveal your true self.

Have you been deceiving somebody? Or perhaps you have been pretending to be somebody you are not. It could even be that you have been lying to yourself and that the time has come to start being honest with yourself and with others.

If you take time to be calm and quiet to reflect on questions like these, you will see the truth of the situation, and your intuition will guide you in your next steps.

7. You yearn for freedom

A dragonfly rising up from the mud and water where it has spent most of its life is suddenly free to fly up into the sky and soar, even if it is only for a short time.

Seeing a dragonfly may represent your subconscious yearning for such freedom, and if you desire to be free – perhaps from a situation or perhaps from a person or a relationship – it is up to you to stand up and grab that freedom.

Take time to consider this message, and if you realize this is the deeper meaning of the message, you need to find the courage to act.

Dragonflies are agile, nimble insects that are able to flit here and there with ease. It could be that seeing a dragonfly is a message telling you to be ready to act quickly in the same way in order to take advantage of an opportunity that is about to present itself.

Dragonflies are undeniably among the most beautiful of insects, and they have become imbued with deep symbolism in many different cultures.

If you see a dragonfly, either in a dream or in real life, it may represent change, transformation, freedom, truth or a connection to the spirit world, and by searching inside yourself, you will be able to find the correct interpretation of what it means to you. 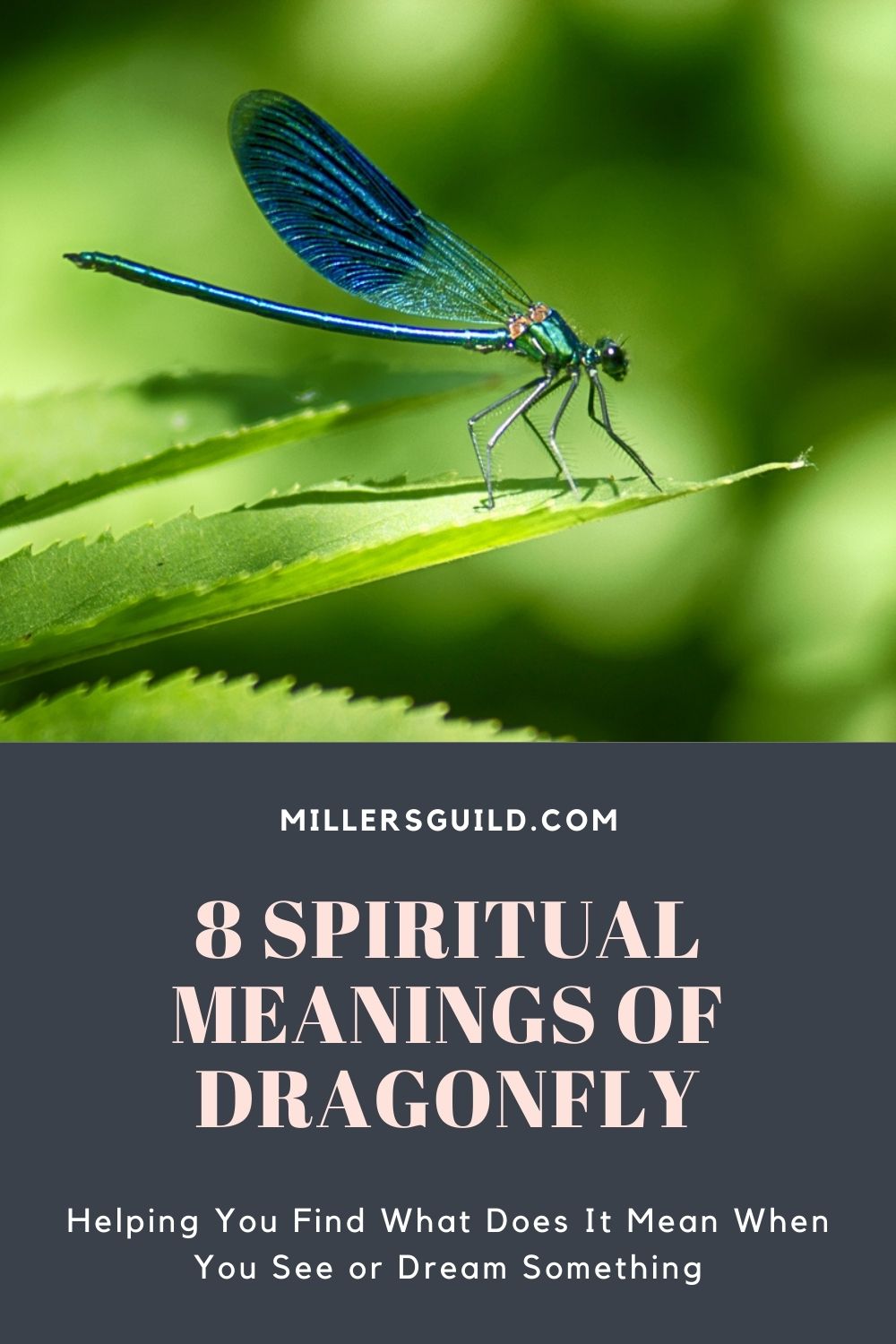 1 thought on “8 Spiritual Meanings of Dragonfly”