Skip to content
Miller’s Guild » What Does a Dream Catcher Do? (Different Types, Meanings & Usage) 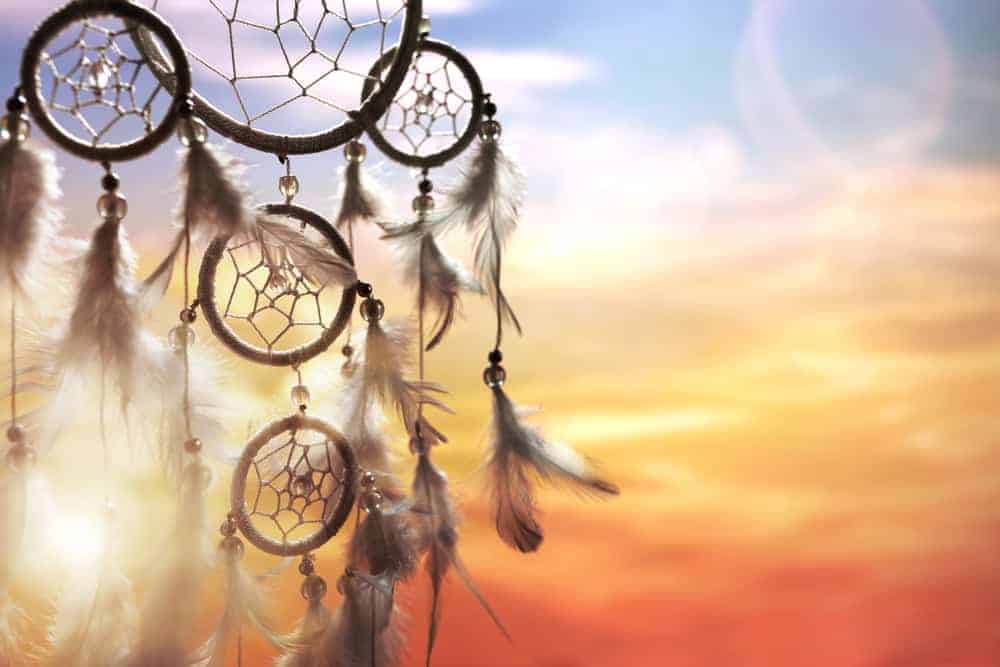 Have you encountered a beautiful and brilliant dreamcatcher and wondered what these accessories mean?

Dreamcatchers are popular souvenir options and are even a fashion statement these days. But, these pieces of art have a long and interesting history.

Many of the dreamcatchers you see in shops and markets today are not the original pieces and are mostly made from artificial instead of natural materials.

If history, culture, and spiritualism interest you, you might be fascinated by dreamcatchers’ origins, meaning, and symbolism.

So, what do dreamcatchers mean? In this article, I will explain how these beautiful art pieces came to be and what they symbolize.

Let’s jump right in and find what dreamcatchers mean.

What Is A Dreamcatcher? 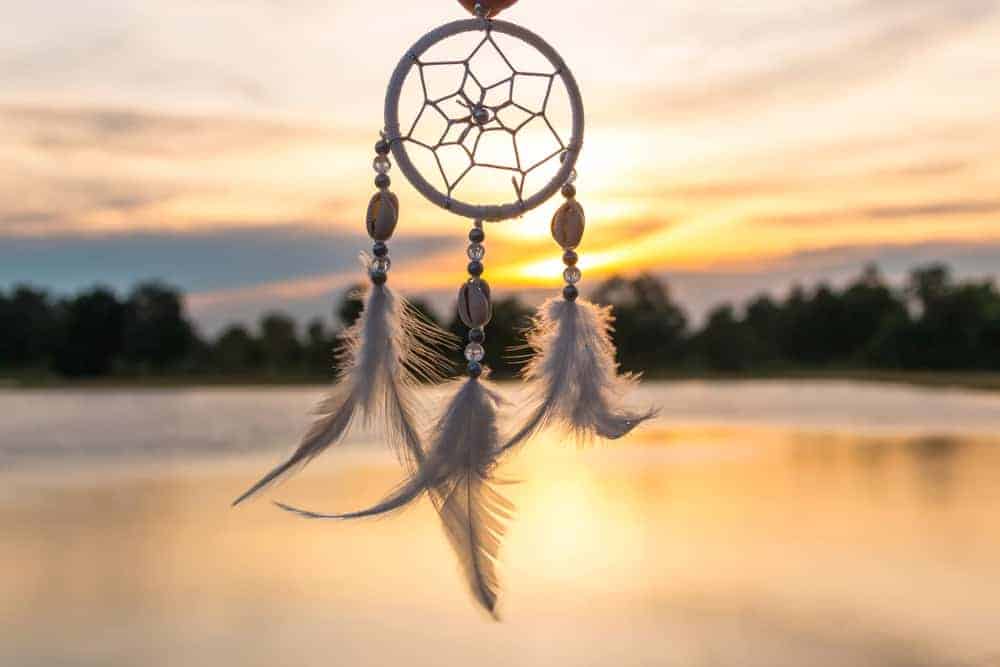 Dreamcatchers are popular crafts pieces originating from the Native American culture. Ancient Indian tribes hand-made dreamcatchers and used them as talismans to keep away bad omens.

Today, dreamcatchers are a far cry from their original look and purpose. The brightly colored dreamcatchers in the fleas markets and gift stores are more of jewelry and home décor pieces than cultural and historical treasures.

The original Native American dreamcatchers were small, generally a few inches in size, and made from natural woods, threads, and charms. In particular, the piece was made from a wooden hoop from which a web would be woven using natural threads. It was common to wrap the wooden hoop with natural leather. Traditional dreamcatchers would have some feathers and beads dangling from the hoop.

The History of Dreamcatchers 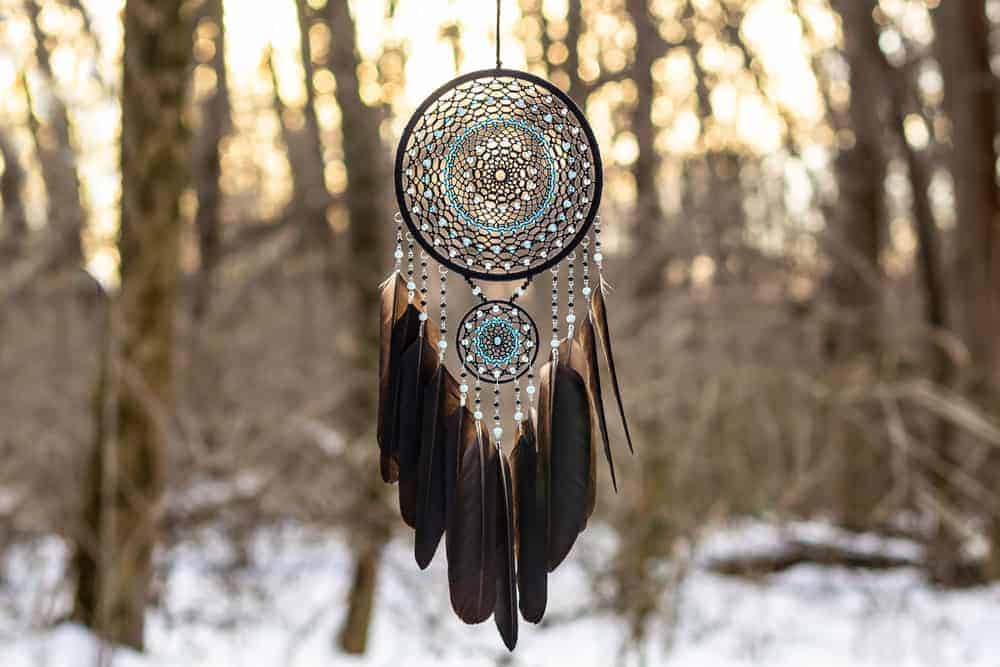 Let’s look at the origins of dreamcatchers and the meaning behind these talismans.

Dreamcatchers among the Ojibwe tribe

The Native Americans are the original creators of dreamcatchers. Many reservations in the USA and Canada spot several dreamcatchers as these items are a core aspect of the culture.

The dreamcatcher can be traced back to the Ojibwe tribe, who called these sacred talismans asabikeshiinh, which roughly translates to spider.

According to the Ojibwe folklore, a spider woman known as Asibikaashi guarded and protected the adults and children in the reservations. But, as the tribe grew and moved further away from the reservation, the spider woman found it difficult to protect everyone.

The spider woman could not visit and protect every child from evil energies each night. So, she enlisted the help of other community mothers and grandmothers who would weave willow hoops with webs at the center. Then, after crafting the hoop, they would hang it above every child’s bed to filter out good dreams and trap the bad ones, protecting the children from nightmares.

The Ojibwe tribes used only one gemstone bead when making a dreamcatcher. The single gemstone denotes only one creator in life, an important concept among the Native American tribes.

The use of dreamcatchers spread from the Ojibwe to other tribes. The Lakota tribe, in particular, used these talismans extensively, although their folklore is slightly different.

Dreamcatchers among the Lakota tribe

The Lakota tribe, one of the many Native American tribes, adopted the use of dreamcatchers. According to Lakota folklore, a local spiritual leader envisioned Iktomi, a trickster and spiritual teacher who embodied a spider.

Iktomi borrowed the spiritual leader’s wooden hoop and began weaving a web at the center of the hoop. As Iktomi wove, he spoke about life’s cycles, explaining that there are good and bad energies in the cycles of life. The good energies will carry you in the right direction while paying heed to sinister forces would lead you astray.

After he completed weaving the web, Iktomi showed the spiritual leader the web in the hoop, a perfect circle with a hole at the center. He explained that the good energies would be trapped in the web while the bad ones would pass through the center hole.

The spiritual leader brought Iktomi’s message to his Lakota tribespeople, who then started using dreamcatchers to filter good and bad vibes, especially at night.

In modern times, dreamcatchers have slightly lost their cultural symbolism. The truth is, most people do not know the origins and traditional meaning of these items. Rather, we mostly view dreamcatchers as popular souvenirs, décor, and craft items.

There is no doubt that modern dreamcatchers are gorgeous pieces of art. Artists today use colorful feathers, beads, gems, and loops to create vibrant decorative items.

Dreamcatchers are not only popular home décor items. They are also widely used in jewelry and as a fashion statement. When given as a gift, a dreamcatcher can hold special meaning, especially if the receiver understands the hidden symbolism of these beautiful charms.

Necklaces are the most common piece of jewelry to feature dreamcatcher charms. But, earrings and amulets are popular items on which one can spot a dreamcatcher pendant or designs. You will find everything from more natural jewelry with a rustic look and feel to ultra-modern pendants made from the likes of stainless steel, silver, or gold.

Aside from jewelry, dreamcatchers also feature prominently in clothing. You will find this pattern on bohemian outfits even among people who do not necessarily feel particularly attached to the item.

Traditional dreamcatchers stand out because they are made using authentic natural materials such as leather, wood, real feathers, wool, and strings. Native Americans feel these modern, and artificial craft items have taken away from their culture. 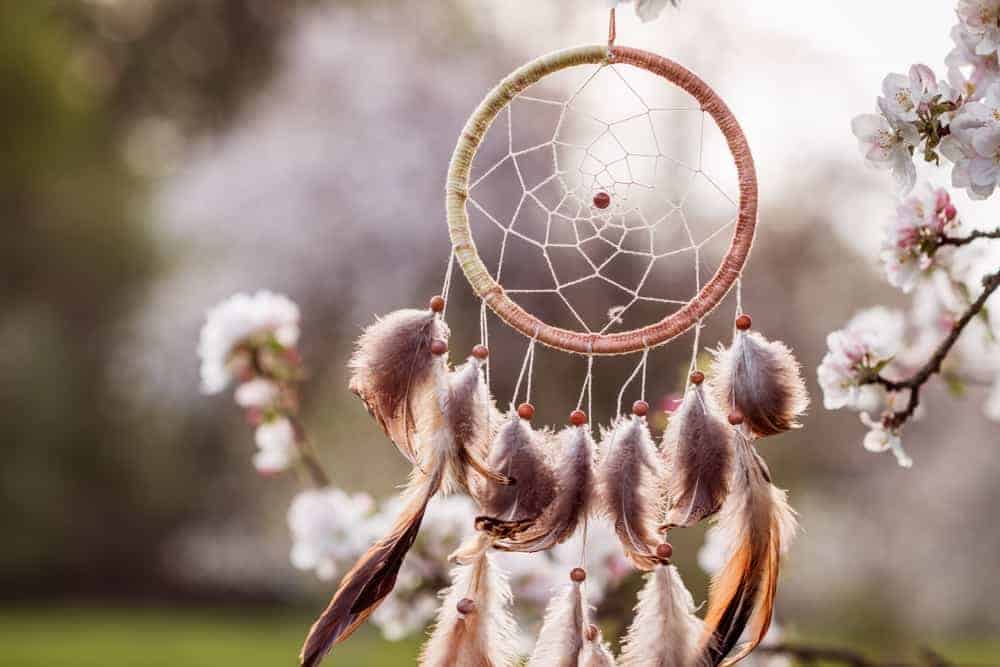 Every part of a dreamcatcher has a special meaning and symbolism. Let’s look at the meaning of each part of a traditional dream catcher.

The circular wooden hoop is the most dominant part of the dreamcatcher. The circular shape is representative of the nature of life. The circular loop denotes that life doesn’t have a real beginning nor an end, an important concept among the Native American tribes, particularly the Ojibwe community. Circles, like the Divine, are the center of everything in the Universe.

Dreamcatchers consist of an intricate web, the second most prominent aspect of the item. The web was traditionally made using natural threads or wool and woven in the shape of a spider web.

The spider web shape is attributed to the Asibikaashi, the female spiritual protectors of the children of the Ojibwe tribe. We’ll talk about Asibikaashi later in the article.

The web is also believed to be important in trapping negative energies from bad dreams and thoughts. The web features a small circle at the center, allowing good energy to pass through and down to the person sleeping underneath the dream catcher.

Dreamcatchers feature at least one bead placed on the spider web pattern. In most cultures, using a single bead denotes the spider that created the web. A dreamcatcher with several beads in the web signifies the number of dreams the web captures at night, and that gets transformed into sacred talismans.

Feathers add a touch of airiness and mystery to dreamcatchers. While the feathers are beautiful, there is more to them than sheer beauty. The feathers dangling from the lower part of the wooden frame trap the dreams that get filtered through the web. They allow the dreams to glide to the person sleeping under the talisman.

Gemstones are sometimes used in place of beads or feathers in areas where it is against the law to use bird feathers. Gems have the same meaning as beads and serve both a decorative and functional purpose. Like the web, gems help to filter out negative dreams and trap the good ones. Like beads, the number of gems used and their position on the web depends on the artist’s preference.

Number of Points on the Web

When you look at a dreamcatcher, you will notice the web inside the hoop has several points. The number of these points is not random; each point is symbolic, with each artist using a specific number of points for a specific purpose.

Below are some common meanings and symbolisms of the number of points on the dreamcatcher web:

The Meaning and Symbolism of Dreamcatchers 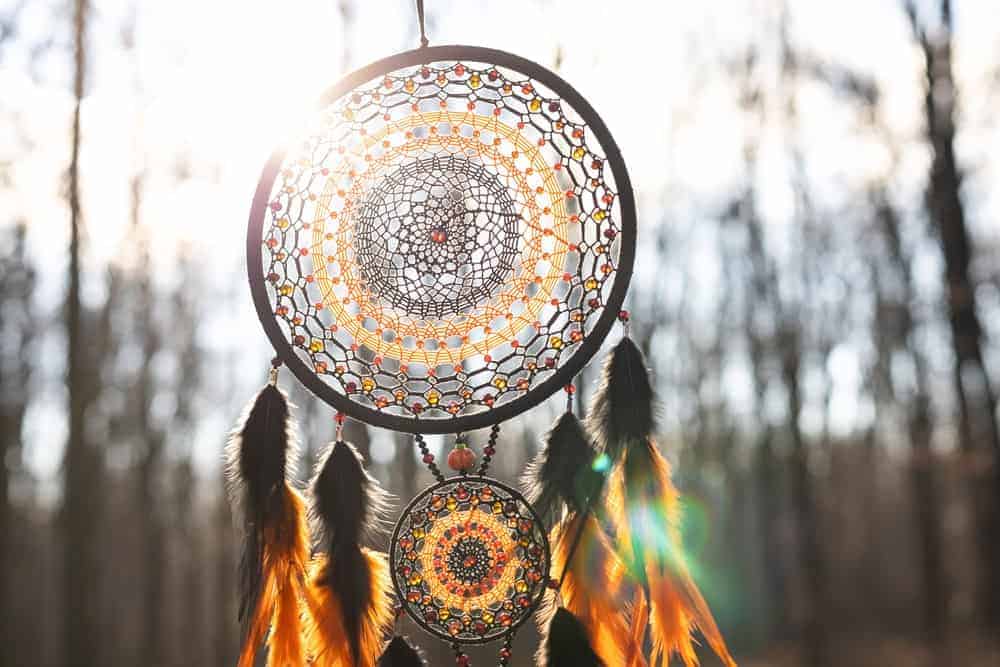 Dreamcatchers share more or less the same meaning regardless of the tribe, parts, size, and design. Here are the most common meanings and symbolisms of dreamcatchers.

Among Native Americans, dreamcatchers are powerful charms that let in good vibes and filter out band energy. The ancient tribes believed the world was ruled by bad and good energy. A dreamcatcher helps regulate the energy that reaches us, ensuring that bad energy stays at bay as much as possible.

There is a reason people hang dreamcatchers in strategic places such as their bed, in the car, door entrance, or at the office. These sacred charms are believed to fend off bad fortune, protecting you from evil forces.

The hoop shape of a dreamcatcher symbolizes the endlessness of life. The use of natural materials such as willow wood, leather, and gemstones denotes a connection with the whole of nature. Hanging a dreamcatcher talisman can be a powerful way to feel connected to Mother Earth and accept life’s flow. It is common for some people to use dreamcatchers to practice mindfulness and connect with all there is.

Summary: What Do Dreamcatchers Mean?

It is hard not to be attracted to dreamcatchers’ sheer beauty and mystery. Whether you feel spiritually attracted to the talisman or simply admire the artwork, a dreamcatcher elicits good vibes.

These mysterious charms originated from the Native Americans, and most reservations in the US and Canada spot some form of a hand-made traditional dreamcatcher.

Dreamcatchers from the Ojibwe to the Lakota tribes are believed to be lucky charms that trap bad dreams and energy, allowing good dreams to glide through the web. Hanging one next to your bed may fend off nightmares, allowing you to enjoy more peaceful dreams.

You don’t have to be superstitious to be drawn to dreamcatchers. Understanding the symbolism of these talismans makes shopping or receiving them as gifts all the more meaningful.