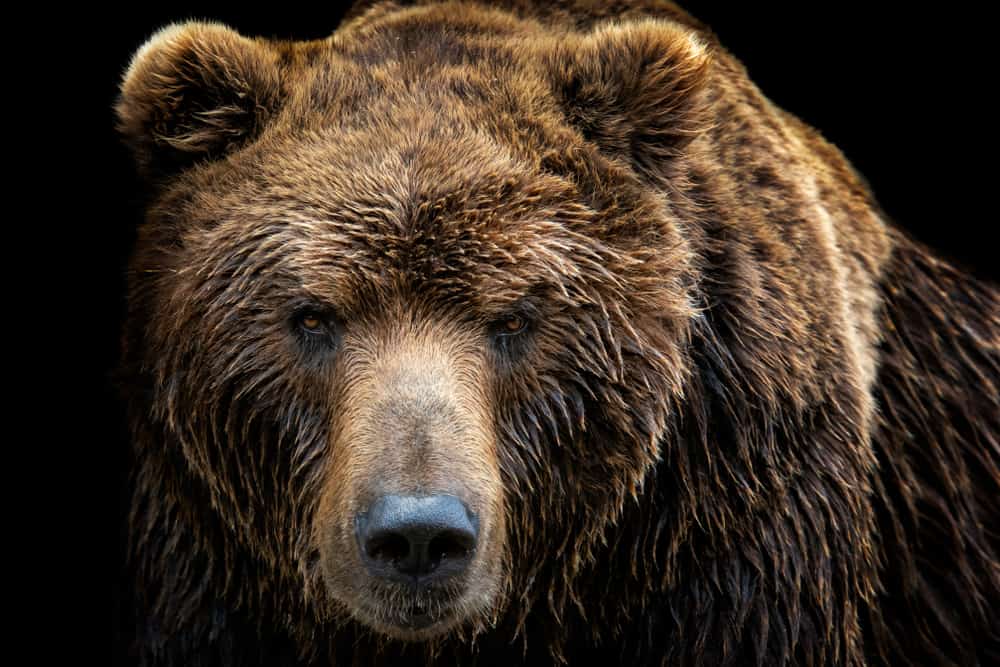 If you’ve had a vivid dream, you might be wondering if it’s trying to tell you something. And if your dream featured a bear, you’ve come to the right place to find out!

We’re going to look at what might lie behind your nocturnal visitor. And we’ll uncover some different possibilities for what it might be telling you about your situation.

So if you’re ready, read on for 17 meanings when you dream about bears … 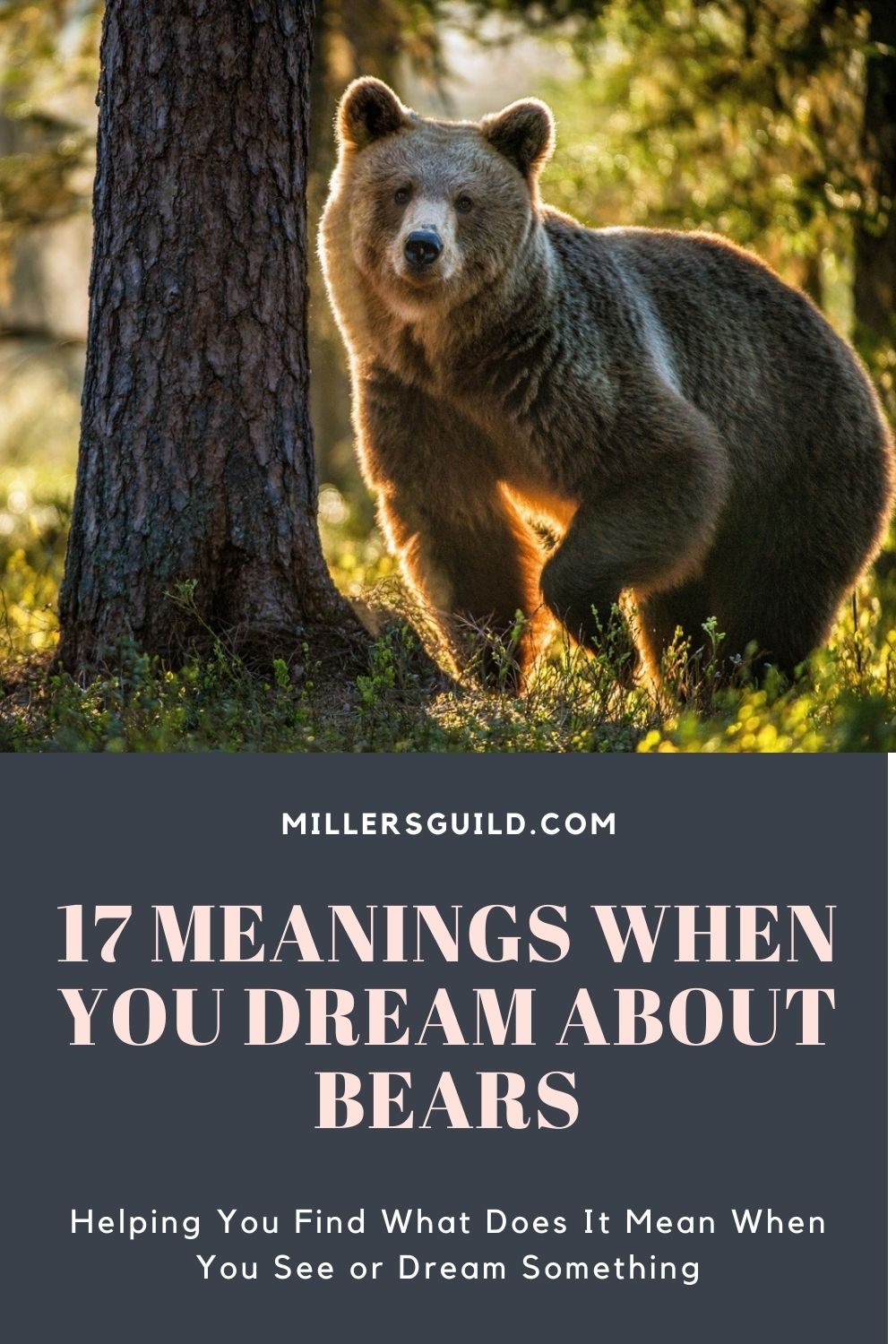 Bears as a Symbol

When it comes to what bears signify in our dreams, there’s disagreement between those who study dreams and their interpretation.

Some describe the bear as a symbol of authority or courage. Others see it as a sign of nurturing and protection. And for others, its wild nature means it’s a symbol of our own fears and insecurities.

Some people believe dreams can predict the future. For them, the bear is generally considered a positive omen, because of its strength and power.

And some believe it’s simply a case of your brain having a bit of fun with word play.  A bear in your dream may represent someone or something you simply can’t bear!

All this means there’s considerable variation when it comes to trying to work out what your dream might be telling you. So to help narrow things down, let’s take a look at some scenarios in which the bear might appear.

what does it mean when you dream about bears

1. Being Chased by a Bear

Dreams of being chased are fairly common, and it usually comes down to one thing. You’re trying to escape or avoid a situation or person that makes you uncomfortable or afraid.

In this case, the bear could be a sign that the pun-loving part of your brain has been at work! The bear is simply the person, thing or circumstance that is “unbearable”.

Pay attention to the feelings in your dream. If you were frightened of the pursuing bear, your dream is probably telling you something about your own response.

Perhaps your fear means you are avoiding confronting what’s bothering you. If that’s the case, your dream may be highlighting an uncomfortable truth: the situation probably won’t improve until you turn and address it.

2. Being Bitten by a Bear

There are lots of dream variations on the theme of conflict with bears. A bear that’s angry or aggressive could be a sign that these are feelings you’re harboring yourself. Perhaps you’re trying to ignore those emotions, and your dream is your mind prompting you to acknowledge how you feel.

If the bear in your dream actually bites you, some dream interpreters believe this has a specific meaning. It could be that there is someone in your life who is presenting a threat. They might be lying or trying to make trouble.

It could also be a sign to reflect on your relationships, particularly any that you’ve newly embarked upon.

In the case of a bear, they’re likely to represent a powerful figure. And because bears are commonly associated with the feminine and motherhood, that person is likely to be a woman.

They may be someone you live with, or perhaps they’re physically close to you in another context – perhaps at work. Likely candidates could be a wife, mother, grandparent or female colleague.

Whoever they are, they are likely to be someone you associate with protection, love and security.

4. A Bear Outside Your Home

While a bear inside your home may be a sign of a powerful and nurturing female, a bear outside can be quite different. Dreams of this kind often involve the bear prowling around. You may be afraid to leave your house for fear of attack.

In this case, the bear is a sign of something that is preventing you from feeling calm and secure. Perhaps there is some kind of situation that is causing you anxiety or discomfort.

The dream may be reflecting those feelings. And it could also be a sign that it is time to take action to resolve the situation. 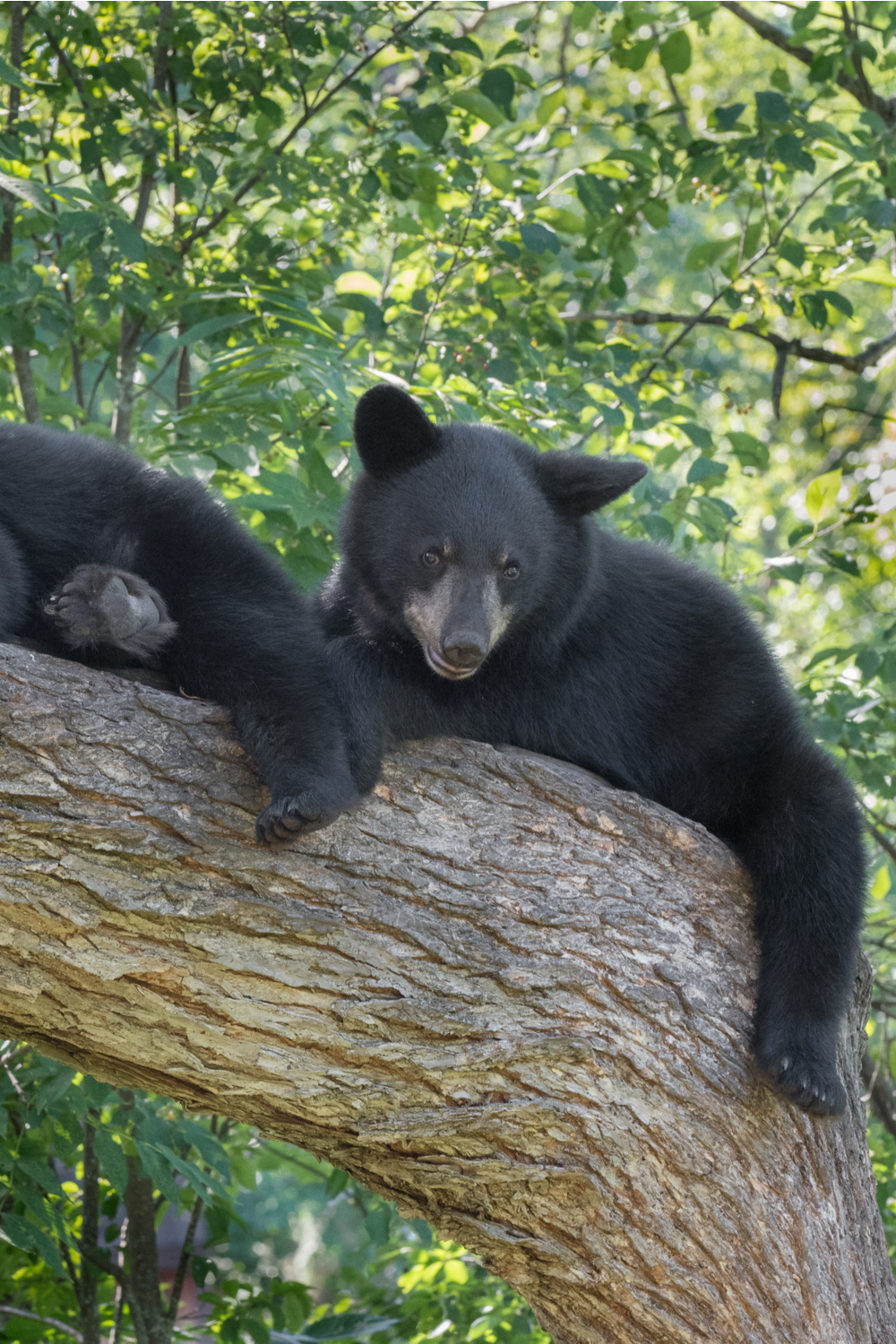 Dreaming of a bear in a tree is usually considered to be a positive reflection of your state of mind. The bear is in its natural habitat, free and content. Your dream may be suggesting that this is how you feel too.

It can also be seen as a sign of prosperity and harmony. The bear’s ability to climb the tree reflects your own sense of wellbeing. You feel physically strong and mentally agile. And you have achieved a state of spiritual balance.

While some dream bears are wild or threatening, others take on a more amiable demeanor. If the bear in your dream is a friendly sort, it may be representing an aspect of your own personality.

It may be that you are recognising some qualities in yourself that you once tried to suppress. Perhaps you were scared of being bold and forthright, like the popular image of bears. Your subconscious mind may be telling you that these qualities can help you achieve positive outcomes.

In other cases, the bear may be representing someone else. Perhaps they are a figure of authority whom you see as a friend or advocate.

In dreams with a talking bear, the most important element may not be the bear, but the conversation.

Whenever we dream of a discussion, it’s usually the brain replaying our own thoughts and ideas. So listen carefully to what the bear has said, and how you’ve replied. The words may be bringing your own internal dialogue to the surface.

Other interpretations see the bear as a form of spirit guide. In this tradition, the bear represents knowledge and intuition. That makes what the bear says very important – it could be valuable guidance and advice.

Female bears are well known as excellent mothers. They stay with their young for longer than any other wild animal, feeding and protecting them. So seeing a bear with a cub in your dream most likely connects to these feelings of maternal love.

If you’re a parent, this could relate to your own feelings towards your child. And while that bond is precious, the dream may also be a warning against being over-protective. Perhaps you are trying to hold your child close when they are ready to explore the world.

The dream may be a reflection of your anxieties and desire to secure their wellbeing. 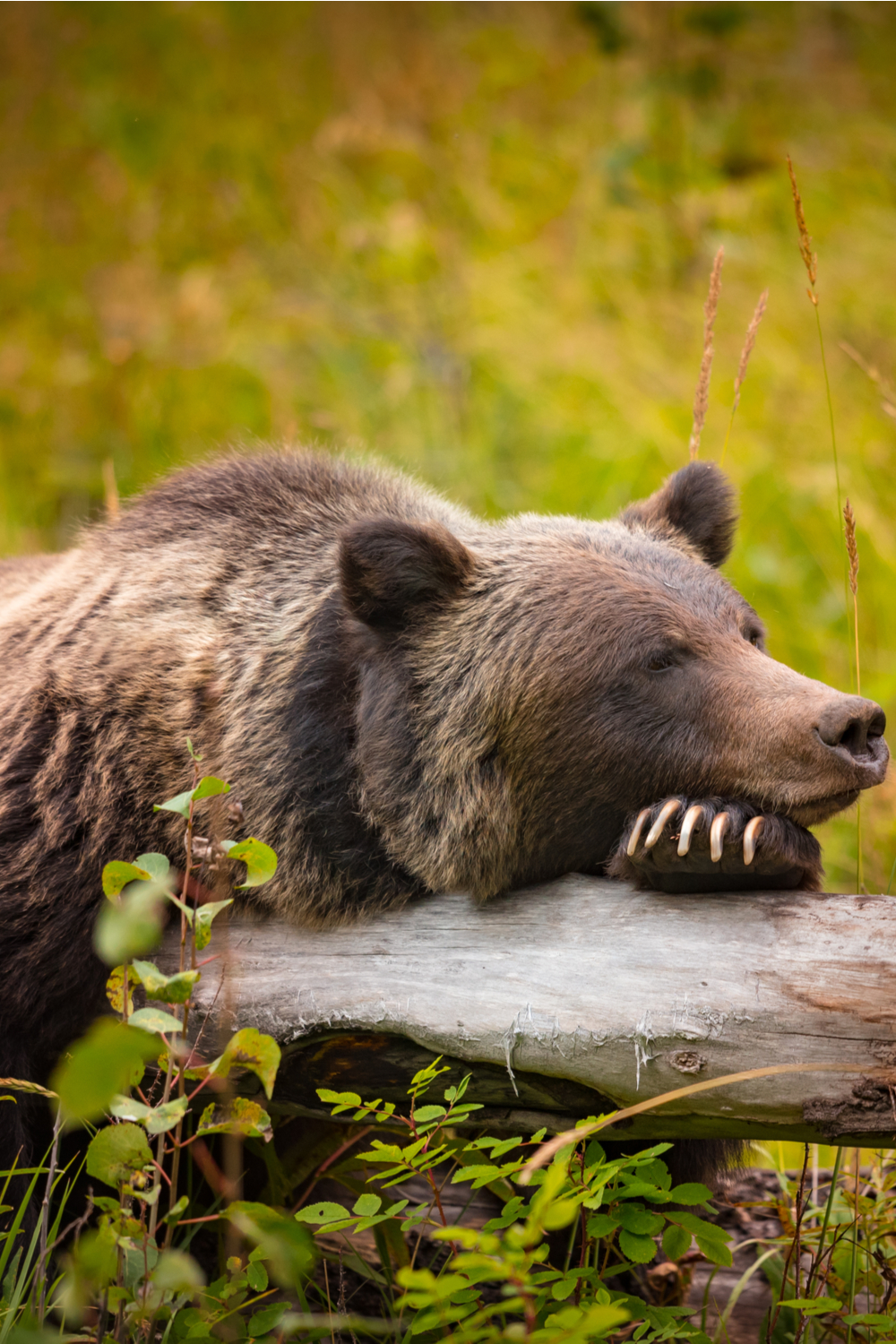 If you come across a resting bear in your dream, the animal may be symbolizing a calm state of mind. Resting bears are believed by some to represent deep thought and peaceful contemplation.

There’s a similar meaning if the bear is asleep. This is often seen as encouragement to introspection and soul searching. By looking inwards, your dream is suggesting, you may find the answers and guidance you seek.

If you are trying to wake the bear, however, the meaning is a little different. Your dream may be reflecting your own attempts to bring something to the surface.

That something might be an aspect of your personality. Perhaps you feel that a part of you has been “in hibernation”, and it’s now time to revive it.

Or it could be a creative idea or project you’ve been thinking about for some time. Your subconscious mind could be telling you that now is the idea to bring it to life.

While in many scenarios a dream bear may have the upper hand, that’s not always the case. And if you’re dreaming about hunting a bear, it could be a very positive sign.

Some people believe it means you’re taking control of a situation and actively seeking what you want. You’re working towards achieving a goal, and you have a great chance of succeeding.

Some interpret the dream even more positively. For those who believe dreams can predict the future, hunting a bear is a sign that you will succeed in your endeavors.

A dream about a bear trap may be another case of your brain playing on words.

You may have heard the phrase “bear trap” used in relation to the financial markets. It means a situation where investors see positive changes in the market and invest, expecting prices to rise. Instead, price fall, and the investors lose money. They’ve fallen into a bear trap.

A bear trap in your dreams can have a similar meaning. You may be excited about a new venture and not properly considering the risks associated with it.

Dreaming of a bear trap can therefore be a message to proceed with more caution.

12. A Bear That Runs Away from You

You might imagine that a bear running away from you suggests you’re a force to be reckoned with. But that’s not usually how this dream scenario is interpreted.

Instead, it’s usually thought that the bear represents yourself. So if that’s the case, what are you running from?

The standard interpretation is that your dream suggests you are running from problems, rather than confronting them. Strangely enough, it’s similar to some interpretations of the dream of being chased by a bear.

Your dream may be a reminder that problems can’t be resolved unless you face them honestly.

If the bear in your dream appears sick or wounded, they may represent yourself or perhaps someone close to you.

It may be that you are yourself feeling unwell, or as if you’re being held back in life. Or you may be worrying about the wellbeing of a loved one. Your subconscious mind may be translating these anxieties into your dream world.

Dreaming of a dead bear may symbolize the absence or loss of a person of authority in your life. It is generally, however, considered a positive omen. You are taking control of your own territory – or to put it another way, you’re in charge of your own destiny.

A similar meaning is ascribed to a dream in which you kill a bear. You are overcoming barriers and achieving victory.

If you’re feeding a bear in your dream, it may represent a new project or venture. Perhaps you’re seeking to grow a new business, or develop a new skill. The act of feeding symbolizing the action you are taking to nurture it.

For those who believe dreams forecast the future, this dream may relate to a project that has not yet started. It’s a sign that new things are on the way, and that you should act to nourish your goals.

Thankfully the cruel practice of making bears dance is now history in most parts of the world. But a dancing bear appearing in your dreams is still considered bad news.

Some people believe it’s a sign that troubles will be coming your way. There is good news, though – they won’t hang around for long. The dream is reassuring you that you have the power to overcome the barriers placed in front of you.

Not all dream bears are strong and powerful. What does it mean if you dream of a teddy bear?

Dreams of childhood toys like teddies are often comforting. They take us back to our younger selves and can represent fun, affection, friendship and love.

The precise meaning of the dream will depend on the context – where is the teddy, and what is happening to it? But this dream can be a sign of bonding with your inner child.

That brings us to the end of our round-up of different meanings when you dream of bears. We hope it’s given you some insights into how you might interpret your dreams.

Remember to think about all the different aspects of your dream. As well as thinking about the in your dream, consider how you felt. Those emotions can be a powerful guide to unlocking hidden messages from your psyche. 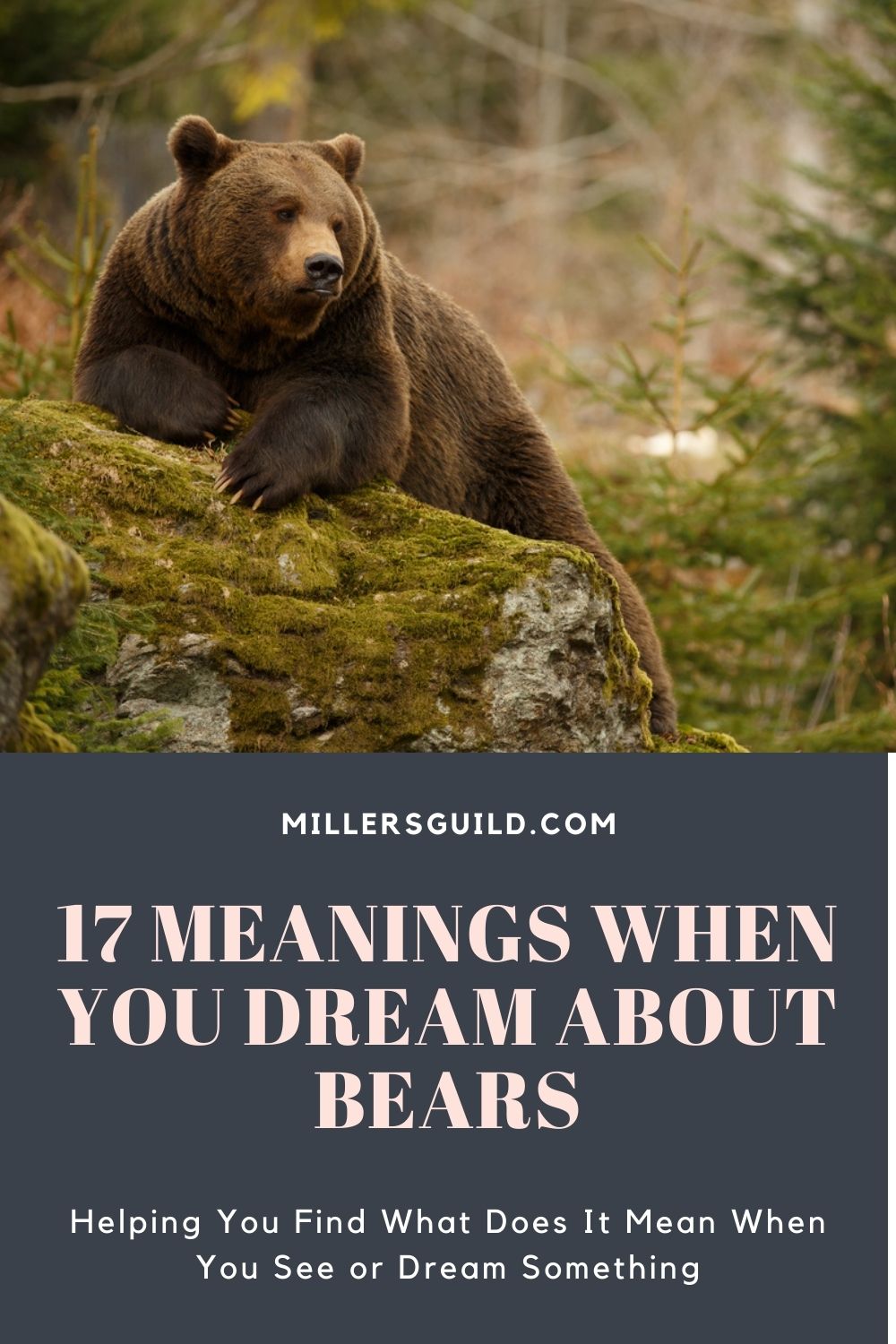 8 thoughts on “17 Meanings When You Dream About Bears”