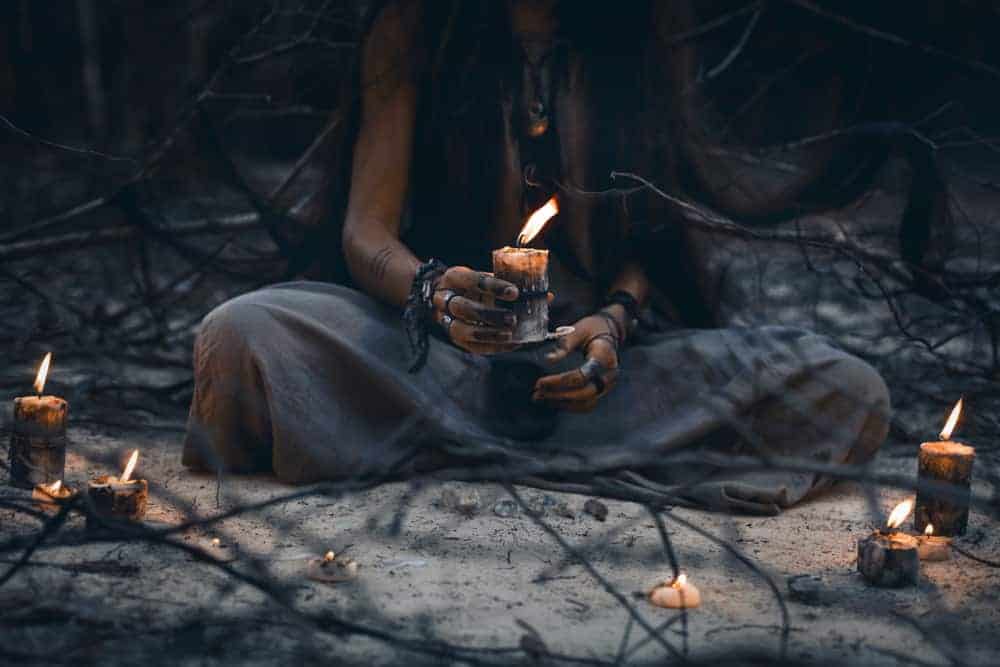 Witches have appeared in myths and legends for thousands of years. But what does it mean if they pop up in your dreams?

Are they bringing some kind of supernatural message? Or does the explanation lie in the musings of your own subconscious mind?

We’re going to explore the symbolism of witches in dreams. And we’ll look at 15 meanings of dreams about witches to help you understand what they might be telling you.

So if you’re ready, let’s get started! 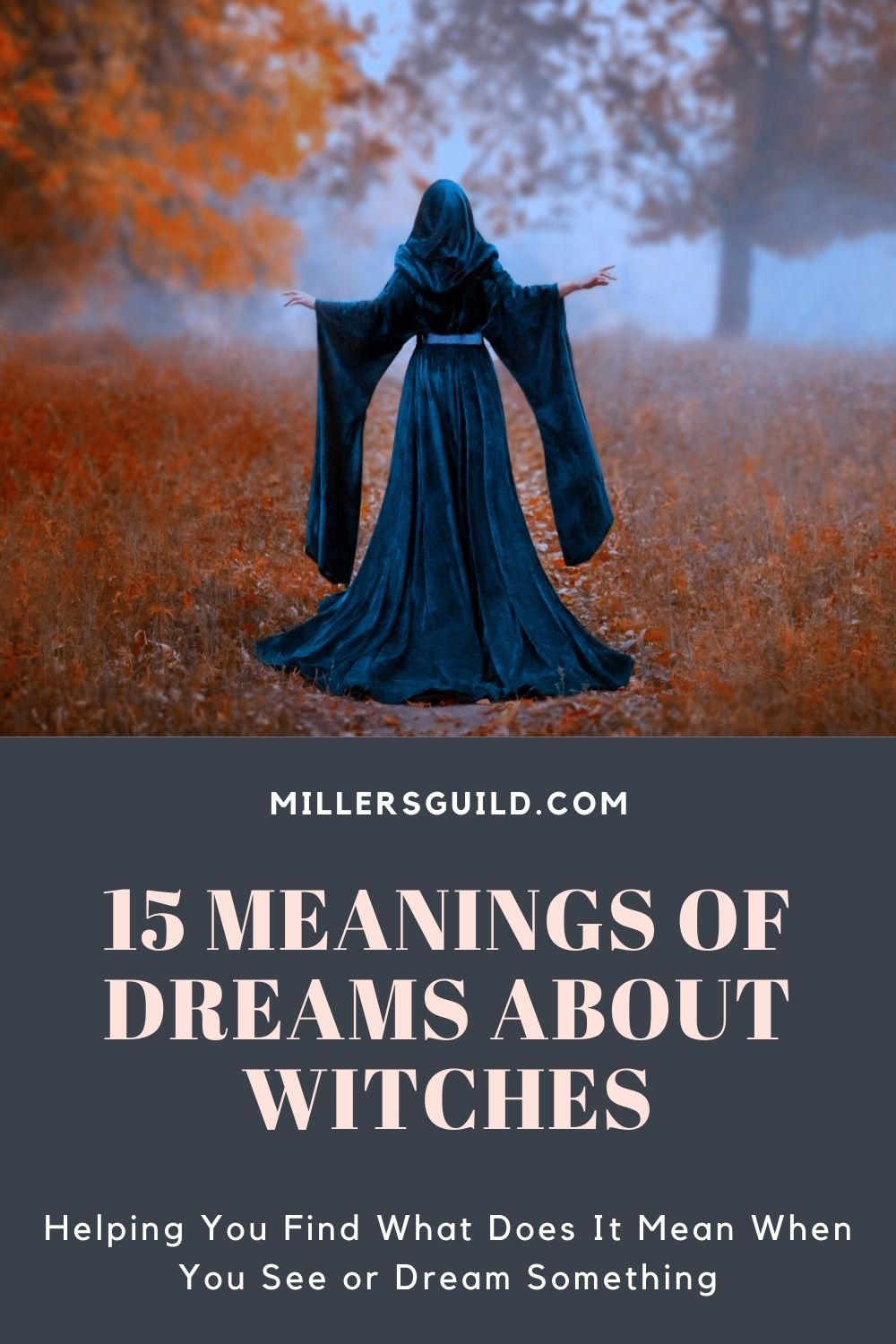 That means that dreams can be confusing. They often jump around in time and place. And they can feature all kinds of elements that are there to represent something else.

So if your dream has included witches, what might they signify?

Well, the precise answer will depend on your own thoughts about witches. And the details of your dream will most likely be colored by your recent experiences and observations. Paying attention to every element, as well as the feelings your dream evoked, will help you find an accurate interpretation.

But in many cases, beliefs and ideas about symbols are shared by lots of people. So when witches appear in our dreams, there are a number of meanings that are likely to lie behind them.

In all cultures, witches are magical or spiritual creatures, possessed of special powers. Those powers may be used for good or ill. In some traditions, witches are more usually considered evil. In others, they are wise and skilled in healing. In most cases, witches are associated with women.

All these representations can feature in the meaning of the witch in your own dream.

The scenario in which the witch appears will also be important to the meaning. Let’s take a look at some of the different ways witches can feature in dreams, and what they might mean.

what does it mean when you dream about witches?

Did your dream involve simply seeing a witch, who didn’t interact with you in any way? This kind of dream subverts the expectation of witches as threats, and it can be a very good sign.

Perhaps you’re worried about something – it could be a project, a journey or even a relationship. You’ve been anxious that it may not go well. Your dreaming mind could be reassuring you that you have nothing to worry about.

Try to remember how you felt in your dream. If you were relieved when the witch ignored you, this interpretation may be the right one.

Some people also interpret dreams of this kind as meaning that good luck is on the way.

2. A Witch Casting a Spell on You

If you were the victim of witchcraft in your dream, the meaning may be less positive. It suggests that you suspect someone in your life feels malice towards you. You may fear they’re acting against you, just as the witch did in your dream.

Your brain’s choice to represent them with a witch also suggests you’re anxious that this person has power. Perhaps they hold a position of authority. Or more likely, you see them as having the ability to manipulate those around them.

If the witch in your dream was mixing a potion, your dream could relate to creativity. You may perceive someone or something in your life as “making the magic happen”. That person could even be yourself.

Other details in your dream could provide more clues to its meaning. Did you know what the potion would do? Or was it just generally “magic”?

Did the witch have any distinguishing features that might point to a particular individual? Or did you identify with them in a way that suggests they might represent an aspect of your own personality?

If your dream was accompanied by a feeling of hope or excitement, it suggests creativity and innovation. But if you were anxious, that feeling may reflect real-world worries. Perhaps you’re not confident that new projects will bring the results you hope for.

4. Being Attacked by a Witch

A dream in which you were attacked by a witch may reflect feelings of being persecuted. The nature of the attack may again provide clues to the underlying worries you’re feeling.

We’ve already covered being the victim of a spell. But if the witch attacked you physically, your dream may indicate someone you feel is a physical threat. It could also relate to a fear of illness.

Again, the appearance of the witch may give you clues to what or who they represent. The location in which the witch appears can also be important. Is the witch in your place of work or study? That may be where you fear encountering the threat.

The appearance of your home in a dream often represents your place of security. It can even represent yourself, with different rooms standing in for different aspects of your personality.

If you’ve dreamed of a witch in your home, it may suggest you’re worried about negative energy in your life. That’s particularly likely to be the case if the witch was chasing you. It suggests that you feel you’re on the retreat, pursued by powerful forces.

Some people believe that dreams can foretell the future. For them, this dream can be a bad omen. If you’re considering embarking on a new project, it may be wise to wait until conditions improve.

6. A Witch Riding a Broomstick

A broomstick is the traditional form of transport for the witch about town. So if the witch in your dream is riding one, it might be that your dream is simply providing extra detail. It’s like your subconscious brain screaming, “This is a witch!” to make sure you get the message!

But if the broomstick seemed important in your dream, it’s likely it has a deeper meaning.

Some people believe that dreaming of a witch on a broom has a very specific interpretation. It could mean that bad news about your job is on the way. You may be asked to take on additional responsibilities, without extra pay or recognition.

Alternatively, the broom might relate to a desire for escape. Perhaps you long to jump on your own metaphorical broomstick and leave the situation you’re in.

7. A Witch That Talks to You

When something or someone speaks to us in our dream, it’s often a message from our subconscious mind. It’s been hard at work picking up on what’s going on around us. Now it wants to let us know what it’s discovered.

In this case, the fact that it’s a witch talking may be less important than what she says. Pay attention to the message, because it may well contain useful insights.

But if you have the frustrating experience of not being able to remember what the witch said, don’t worry. It may be a sign that it will take time to understand new information that’s coming your way.

8. Seeing a Witch at a Distance

Was the witch in your dream a long way away? Older dream interpretations suggest this means a business proposal or contract is on its way.

That proposal could be very exciting, but take care. Examine all the details carefully before deciding whether to proceed.

Sometimes you might dream about not one witch, but many. A group of witches who work and live together is known as a coven. If that’s what you dreamt about, the meaning may be connected to the traditional interpretation of witches as connected with business proposals.

Your dream may be indicating that you’ll have lots of different options. And there are many opportunities for financial rewards.

But as with a dream of a witch in the distance, it’s wise to proceed with caution. Consider your position carefully before signing on the dotted line.

10. Someone You Know Appears as a Witch

If your dream featured someone you know in the guise of a witch, it may indicate that’s just how you see them. Perhaps you’ve picked up on hints that the person in question bears you ill will. This dream could be your brain’s way of pointing this out and warning you to take care.

Of course, the details matter as much here as in any other dream. If the dream was of a friend dressed up for a party, the interpretation might be quite different. The way you felt towards them in your dream will be the key to divining the meaning accurately.

Sometimes the witch in your dream might be you! So what does it mean if your subconscious mind is portraying you in this way?

It’s likely that this dream is recognising your own sense of power. It’s a positive reflection of your control over your own life and your ability to effect change.

It can, however, also indicate conflict around you. If that strikes a chord, consider whether you’re comfortable with your own conduct. Appearing as a witch in your dream may suggest you’re worried about some aspect of your behavior.

Sometimes our brains like to show us literal images of common turns of phrase. If you’ve dreamed you were searching for a witch, it’s likely that’s what your subconscious has been up to. It’s showing you literally engaged in a “witch hunt”.

In other words, it’s pointing out that you may persecuting someone who doesn’t deserve it. A dream like this is a message to pause and re-examine your approach.

A dream in which you kill a witch belongs to the dream family of vanquishing your enemies. It’s a positive sign of your ability to take control and overcome obstacles. And it can also indicate your desire to protect those around you from trouble.

The witch here is likely to represent something or someone in opposition to you. Look for clues to its identity in the appearance and behavior of the witch.

14. A Witch Offering You an Apple

A dream in which a witch offers you an apple may relate directly to the famous fairy tale, Snow White. In your dream, you are the innocent person an evil entity is trying to trick or harm.

It may also relate to temptation. Apples have been associated with temptation from evil sources since the Biblical story of the garden of Eden. And Snow White bit into the apple because it looked delicious.

So this dream suggests you’re worried that something that looks good may be to your detriment. It could be a business deal, new job or even a new relationship. And it indicates you’re suspicious about the intentions of whoever is making the offer.

If the witch in your dream was laughing, the interpretation depends on the kind of laugh. Was it an evil cackle, a mischievous chuckle, or a joyous peal of laughter? What kind of emotion did you feel when you heard it?

If the laugh felt unpleasant, it might indicate fear that you’re being mocked by someone close to you. Some people hold that hearing a witch laugh in a dream also augurs bad news. Or that it means you’ll experience a mishap and that others will deride you for it, instead of offering support.

But if the laugh made you feel happy, the interpretation will be very different. It could indicate a source of joy and magic in your life.

The Many Faces of Witches in Dreams

That brings us to the end of our look at the different meanings of dreams about witches. We hope it’s helped you find the message behind your own dream.

Remember, the scenarios set out here can guide you in your interpretation. But the most important thing is to consider all the details of your dream, and the way it made you feel. Ask yourself what the witch in your dream represents to you, and you’re sure to find her true meaning. 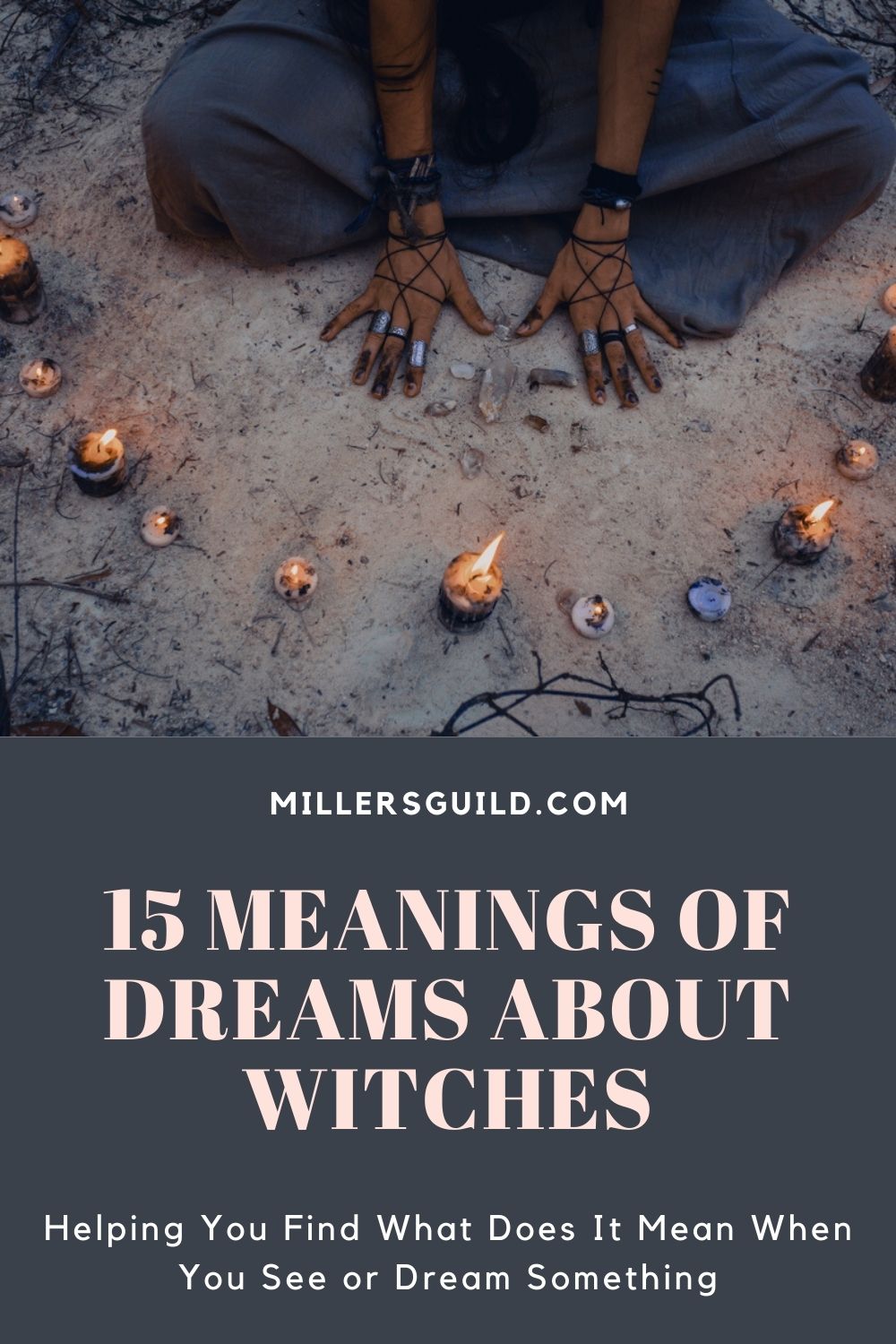 1 thought on “15 Meanings of Dreams About Witches”