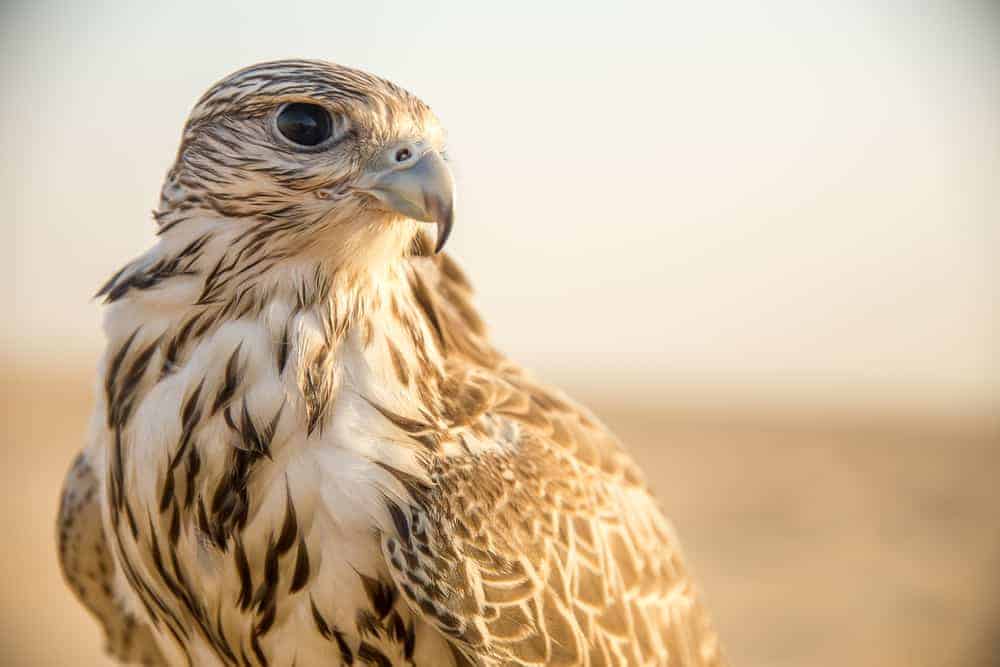 Are you afraid that your life has gone out of track? Do you want to regain your control and steer your life towards a brighter future? Falcon as spiritual guides can definitely help!

As vicious as they are, falcons give us plenty of valuable lessons as spiritual teachers – to be independent, focused, determined, patient, and ambitious. If you’re wondering what falcons symbolize spiritually, culturally, and religiously, you’re at the right place!

What’s more, at the end of this post, find out 6 falcon dream scenarios and their spiritual meanings. We cannot wait any longer! Let’s begin! 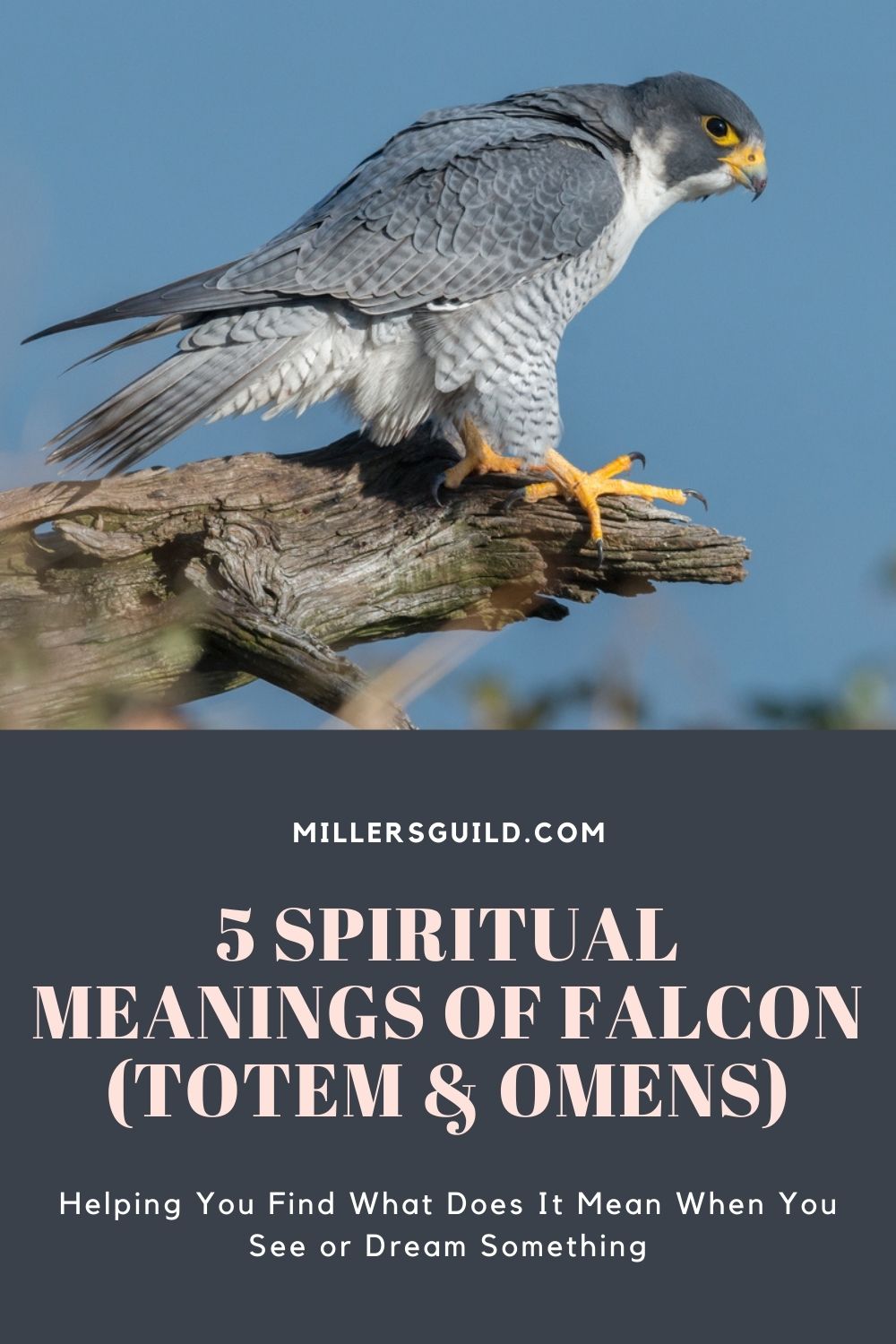 What Do Falcons Symbolize?

Baby falcons are required to grow up much quicker relative to other bird species. They learn to fly at a young age. This species learns to defend themselves and not rely on others for protection and survival from a young age.

In this sense, falcons are symbolized as autonomous birds. Moreover, falcons’ ability to adapt to surroundings quickly and fly impressively high altitudes allow this creature to explore their freedom. No wonder these birds are distributed worldwide, excluding Antarctica.

Falcons have around 8 times better visions than humans have. Their eyes are capable of spotting prey from high above the ground. Their focus and determination when it comes to hunting are equally impressive.

Therefore, a falcon symbolizes vision and focus, and this spirit animal guides us to see things from a better perspective in life.

Falcons don’t settle for anything less than they deserve. They are famous for nesting in the highest branches of tall trees, cliff edges, and even skyscrapers.

Falcons love their view from high above. Therefore, falcons guide us to become the best version of ourselves and fight for the things we deserve.

With a speed of up to 200 mph, falcons are one of the fastest flying birds. They are also powerful hunters as they strike their prey with high agility and strength.

Finally, falcons symbolize patience. These birds patiently scan from high above the sky and only attack their prey when a perfect opportunity arises. 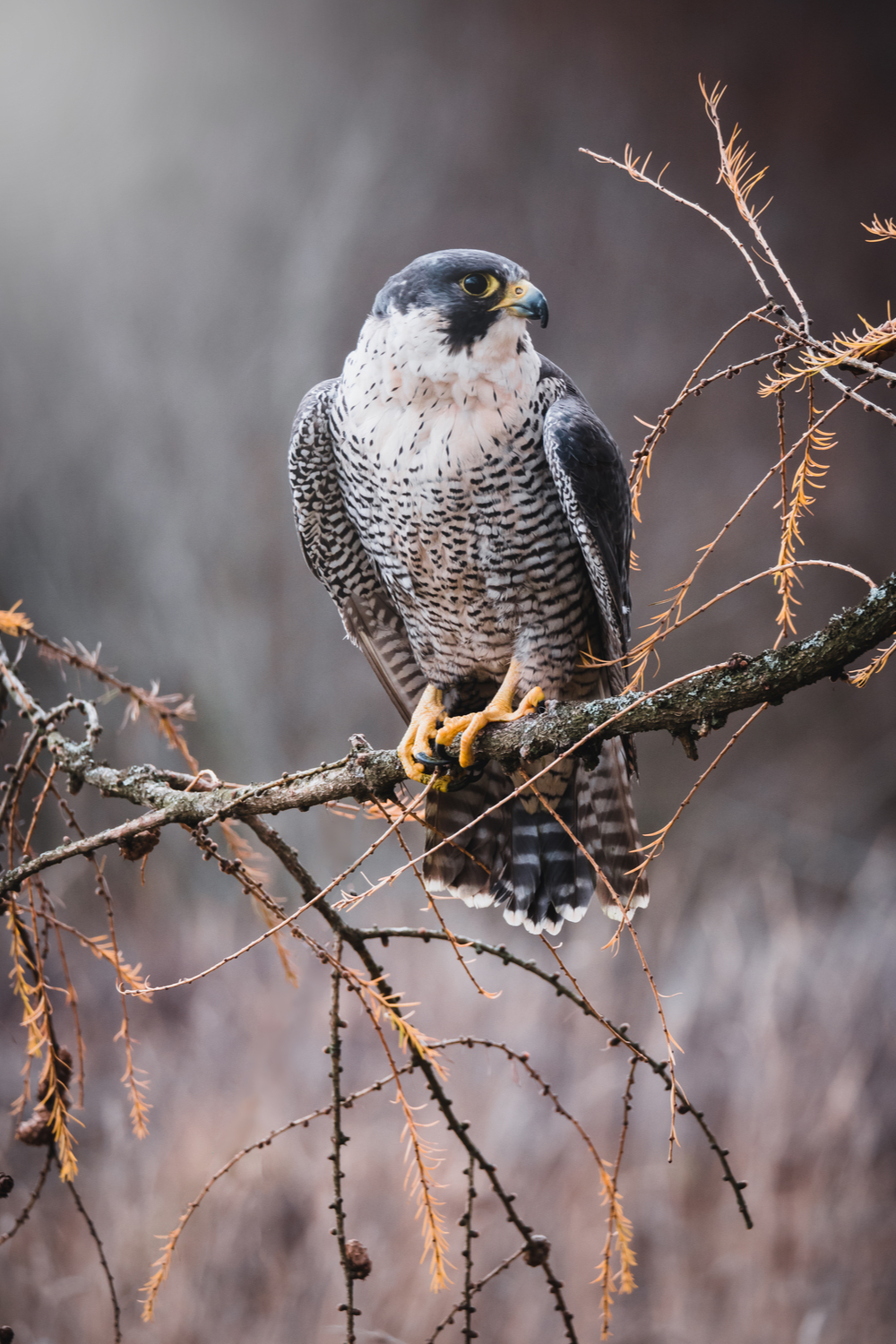 The most widely distributed and most talked about falcons are Peregrine falcons. With the highest speed record of 242 mph, the peregrine falcon is the fastest bird in the diving category and is, therefore, symbolized for speed.

Peregrines or Duck hawks, as North Americans prefer to call them, are also notorious for their aggressive hunting style. The combination of its speed and the strength of its beak is lethal to its prey. Here’s a quick fun fact – peregrines are also associated with martial arts.

Many Native American tribes revered falcons for their power. Among those belonging to Mississippi culture, falcons were considered messengers of God and were esteemed given their ability to soar high in the sky.

They believed in the supernatural connection of falcons to the upper world and venerated these birds as deities. In other few tribes, these birds were used as clan animals and associated with warfare and victory.

In Japan, falcons are appreciated for their free-spirited nature and are associated with good luck and wealth. Likewise, according to Feng-shui, falcons are symbolized as spiritual guides who help humans plan and walk the path towards success.

Among Hindus, there’s a legend that talks about how Shyena, a divine hawk, intends to bring Soma, a ritual drink from heaven, to rejuvenate all the livings on earth.

Celtic legends talk about how we can learn from peregrine falcons to be wary of possible dangers. In Celtic cultures, falcons are associated with authority and class.

Likewise, according to the Celtic zodiac, those born under falcon symbols are believed to be inherently curious, ambitious, insightful, and knowledgeable.

In Egypt, falcons are God of justice and order, Horus, is depicted to have a falcon head with the eyes of the sun and the moon. Consequently, the falcon is one of the most revered emblems in Egypt. Falcon is, therefore, symbolized as divine kingship, the king of birds and sky among Egyptians.

Moreover, another Egyptian deity, Khonsu, is also represented with a falcon head and is associated with God Horus. On the other hand, falcons are associated with healing and fertility in some African cultures.

Biblical Meaning of A Falcon

A small falcon species, Kestrel, is associated with familial love and fidelity in the Bible. Falcons are also related to freedom and salvation. These birds have been further acknowledged for their eyesight in the context that even a falcon’s vision is not able to decode all the hidden secrets.

On the downside, the Bible despises falcons for their hunting habits and the fact that they prey on other lives. In scriptures, they are mentioned as an abomination.

If you have a falcon spirit animal, you probably enjoy your own company. Nevertheless, that doesn’t mean that you aren’t social enough. Despite having fulfilling personal and social relationships, you still need your space.

Your me-time is non-negotiable for you, and it is when you reflect and brainstorm regarding important life matters. You’re also impeccably agile, and your acumen and determination are out worldly. Whenever you set your eyes and mind on something, you’ll acquire it in no time.

Those with falcon spirit animals run the chances of not being liked given their nature to always act bossy and domineering. They might develop a sort of superiority complex with increasing achievements, admiration, respect, and fame.

When To Call On Your Falcon Spirit Animal? 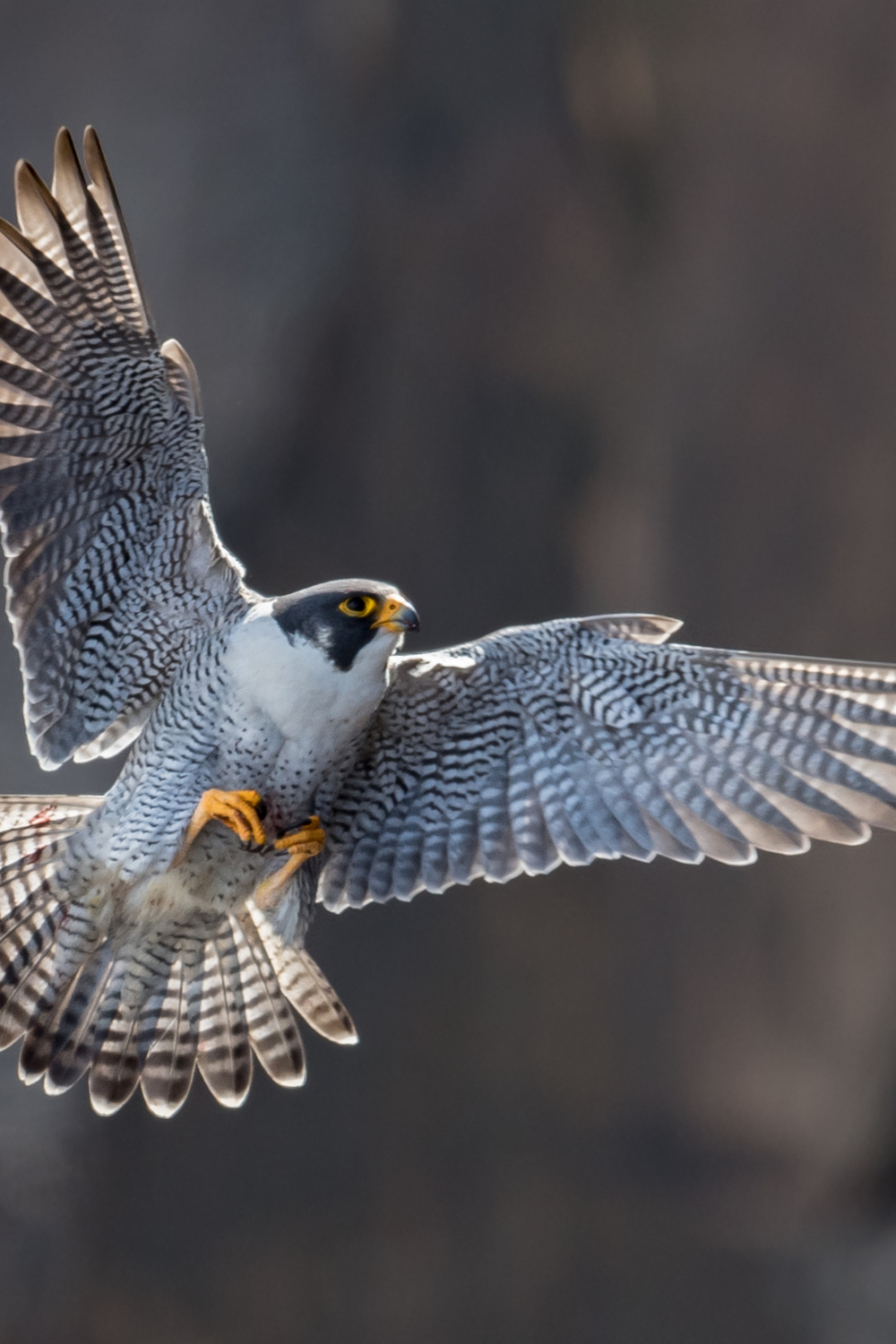 Summon your falcon spirit animal whenever you feel out of control and are dealing with something challenging. If you don’t seem to be able to take control of certain life situations, falcon spirit animal teaches you that not everything in life can be under your control.

Sometimes, you just need to let go and embrace wherever the free-fall nature of life lands you at.

While falcon sightings most often is a good omen, witnessing the bird flying along the wind current is a sign for you to be prepared for upcoming hardships.

In some western cultures, encountering a falcon is associated with revealing secrets. Likewise, many from East African regions believed that if falcons nest at their homes, one of the family members would be a great leader.

Furthermore, encountering a falcon is considered a sign for you to be warier of the opportunities ahead of you and only to grab them if they’re worth your time and energy. 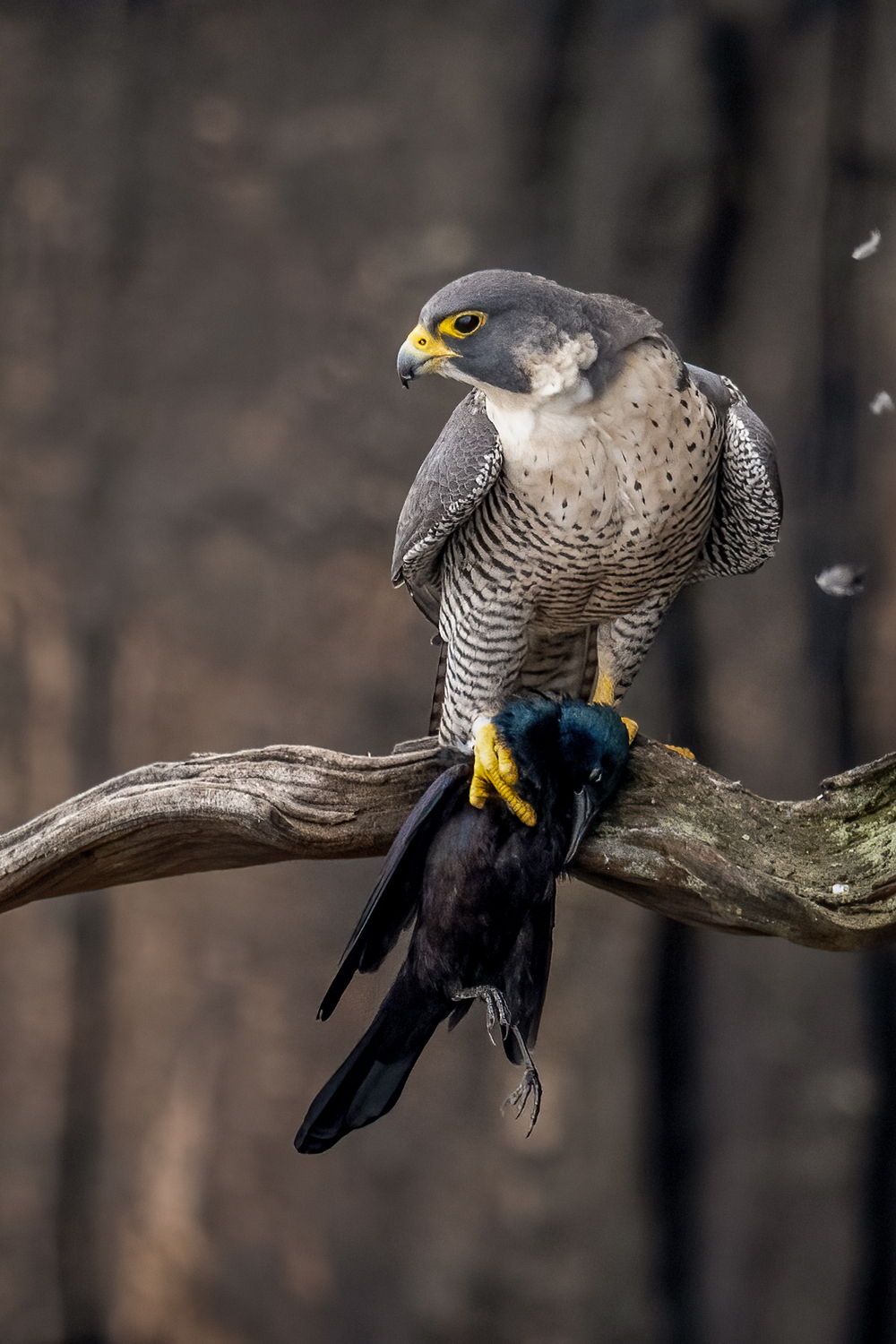 1.   Dreaming about a flying falcon:

If you dreamt of a flacon soaring high in the sky, it represents your high ambitions. If the falcon you dreamt of was flying at its own pace without acceleration, it is an omen of luck. You’ll soon figure out solutions to problems that have been bothering you for since long.

In contrast, falcon accelerating downwards is a bad omen. This dream portends hardships and troubles in your waking life.

2.   Dreaming about hunting and killing a falcon:

While killing a creature in a dream might feel sad and cruel, killing a falcon in your dream is actually a good omen. A killed falcon or a dead falcon means that your enemy has fallen down. You will strategically get rid of them.

This dream further signals that a worry or problem that has been bothering you for since long will finally end. On the other hand, simply hunting for a falcon in the dream is a warning for you to stay away from foes in waking life.

3.   Dreaming about catching a falcon:

Did you catch a falcon in your dream? If yes, well, congratulations! This dream signals lucky and prosperous days ahead. You’ll probably soon find yourself surrounded by big opportunities or awarded with a beneficial position.

4.   Dreaming about setting a falcon free:

If you have your own venture or a business, dreaming about setting a caught falcon free is an absolutely auspicious sign. It signals growth and prosperity in your enterprise.

Even if you’re not, this dream still is considered a good omen. It indicates that a well-wisher is on their way to your life. They will aid in your personal and professional growth.

5.   Dreaming about taming a falcon:

Dreams about catching and taming a falcon are a sign of career and job success. Don’t be surprised if you were to be soon be offered a high-status and high-salary job.

Nevertheless, you mustn’t rule out the fact that nothing will be handed to you on a silver plate, and therefore, you must seek opportunities and jobs with high enthusiasm in order to prove this dream interpretation true.

Be it in the professional or the personal aspect of your waking life; this dream is a sign of increased authority.

Eating falcon’s meat in the dream indicates that your words will be taken with more seriousness among your colleagues and dear ones. On the other hand, if you sold the caught bird instead of eating it, it is a sign that you’ll lose your authority in waking life.

Falcons are impressive birds, aren’t they? If only we could replicate their symbolisms, be patient, ambitious, focused, and independent, our success is almost certain. We hope you enjoyed learning about falcon symbolism.

Do you have more tea on falcons? Their dream plots and their meanings, maybe? Or, does your culture view falcons from a bit different perspective? We’d love to know! 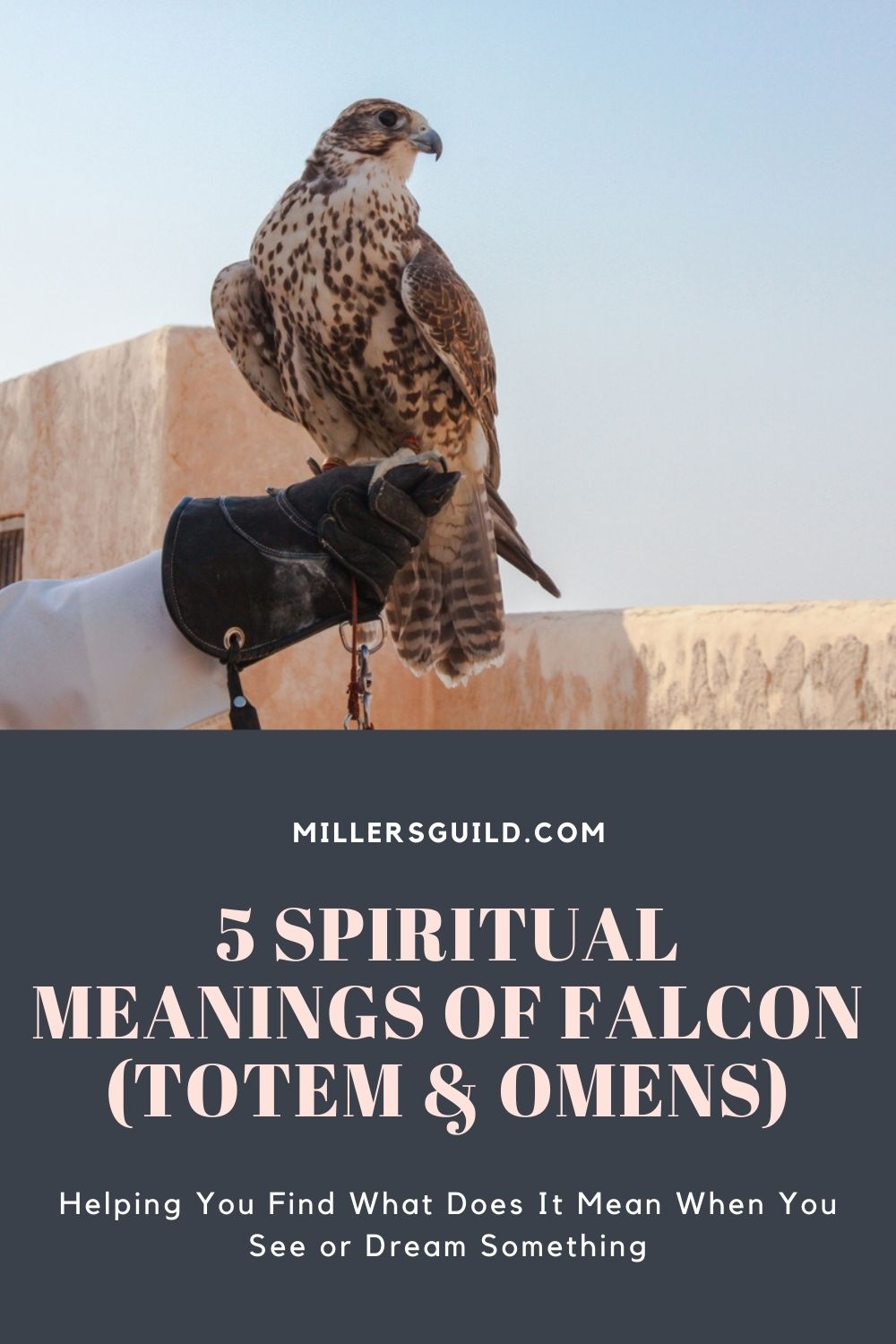