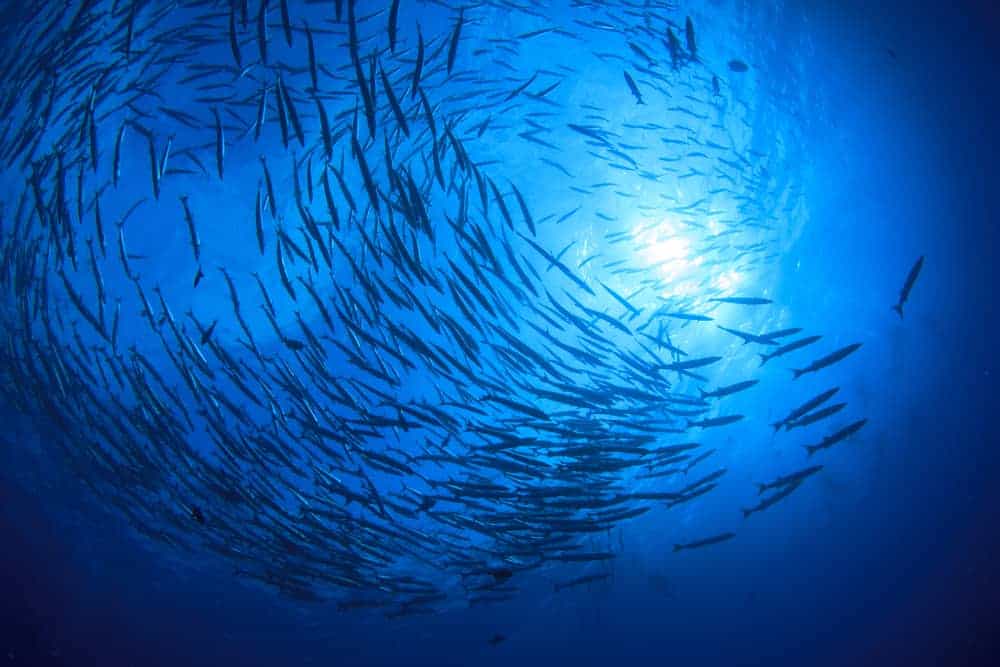 Our planet is covered in oceans, seas, lakes and rivers, so fish are found in almost every corner of the globe.

Fish have also been an important source of food for as long as there have been people to catch them, so it’s only natural that they have profound symbolism for many people around the world.

For anyone who wants to know more, in this post, we talk about fish symbolism according to ancient cultures and modern beliefs as well as looking at the specific symbolism of some important types of fish.

what do fish symbolize?

Before we start talking about the symbolism of fish according to various cultures and beliefs, it’s worth taking a moment to consider the characteristics of fish and the associations with have with them.

For the majority of people throughout history, the first thing a fish represents is probably a source of food. Even the earliest cavemen living by rivers, lakes or the sea would have known how to catch them, and they would have constituted an important part of their diets.

Back then, since there were far fewer people – and they only took what they needed to eat – there would have been no problems with overfishing, so the unlimited supply of fish to eat would have represented great abundance.

When they breed, fish also lay hundreds or even thousands of eggs, so they may also be associated with fertility as well as abundance.

Fish in the sea are free to swim wherever they choose, so for this reason, some people may associate them with freedom and the lack of restraints.

Finally, they are inextricably linked with water since they can’t survive anywhere else, so they can also represent the ocean, its great mysteries and all the spiritual connotations that go with it.

Fish symbolism according to different cultures and beliefs 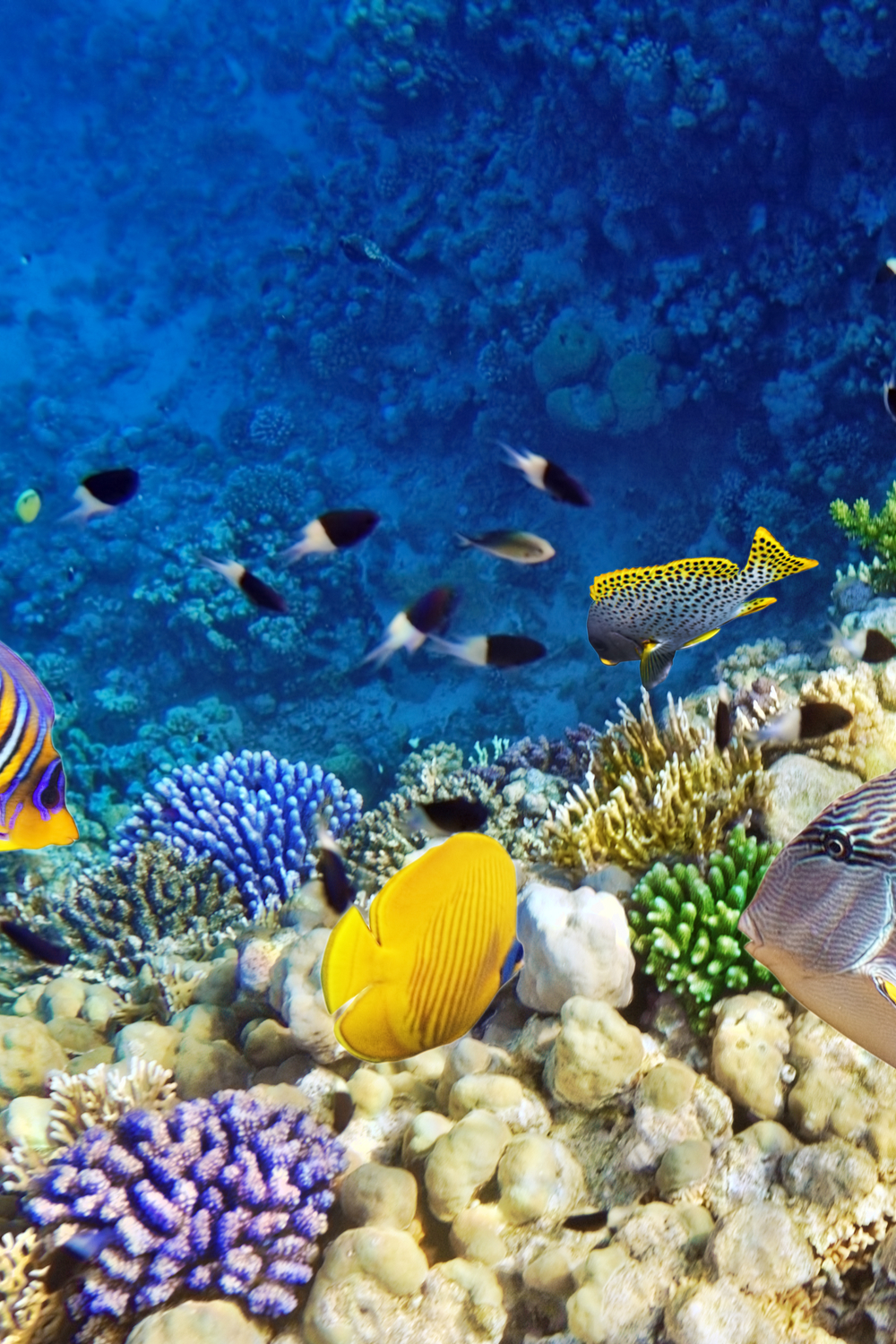 Since fish are found the world over and, as we’ve already mentioned, have served as an important food source for many people down the ages, it’s no surprise that they have acquired powerful symbolism in various cultures and traditions. So let’s look at this now.

Although the various Native American tribes have diverse traditions and beliefs, the natural world that surrounded them and the animals that inhabited it were almost universally seen as having deep meaning and significance.

According to some Native American tribes, especially those in the northwest, the salmon was considered a particularly important fish.

Some saw the salmon as a shapeshifter and a magician who had power over water and who also possessed great wisdom. Others saw it as being connected to prosperity, fertility and good luck.

According to one Native American creation myth, when the Great Spirit created a man and a woman, they didn’t know how to make children, so they placed a fish on the woman’s stomach, which caused her to give birth to a child.

They continued like this for seven days, but then the Spirit saw there were enough people, so after that, he limited humans to being able to have only one baby per year.

Salmon were also seen as an important fish in traditional Celtic beliefs, and one well-known story tells of a mythical hunter-warrior named Fionn mac Cumhaill.

In one episode in his life when he was still a young boy, he met a poet called Finn Éces who had been trying to catch the salmon of knowledge for seven years.

When the poet finally caught the fish, he gave it to Fionn to cook – but made him promise not to eat any of it.

However, while he was cooking it, Fionn burned his thumb on the juices from the salmon and instinctively put it in his mouth. When he did this, the salmon’s wisdom passed to him, and when the poet realized, he gave Fionn the whole salmon to eat.

From then on, he was said to possess the “Thumb of Knowledge”, and whenever he put his thumb in his mouth and said the words teinm láida, he was granted whatever knowledge it was he wished to know. This came in useful in later episodes in his life.

In Welsh mythology, the Salmon of Llyn Llyw was thought to be the oldest creature in Britain and the only one who knew where to find Mabon ap Modron, a member of King Arthur’s war band – so some of Arthur’s men seek the fish to ask where to find their comrade.

Unsurprisingly, fish were also important to the Norse peoples and featured in their folklore.

In one myth, the god Loki tricked Höðr into killing his brother Baldr then changed into a salmon to escape.

The other gods tried to catch him in a net, but he jumped over it. However, Thor grabbed him by the tail, and this explains why salmon have tapered tails.

In China, carp have been bred as ornamental fish for thousands of years, and they were also introduced to Japan in 1603, where selective breeding led to the creation of attractively colored koi by the early 19th century.

In China, they symbolize good luck, prosperity and fertility, and for this reason, they are sometimes given as gifts. Since ornamental carp often swim in pairs, they are also seen as a symbol of fidelity. Fish swimming in pairs is also a common theme in East Asian artwork.

Similarly, in Japan, koi are seen as representing good luck. They also came to be associated with samurai.

In an ancient Japanese myth, a giant catfish was thought to live underground and was guarded by the god Takemikazuchi. This god kept the catfish subdued with a stone, but sometimes when the catfish got loose, it thrashed around, causing earthquakes.

In Ancient Egypt, the Nile perch, a giant fish that can grow to around 2m/6.5ft in length symbolized the night and destruction.

Fish were a symbol of Enki, the Mesopotamian god of water. Later, from around 1600 BCE healers and exorcists in the region wore clothes that were made to resemble the skin of fish.

In Greek mythology, the goddess Aphrodite was closely connected to fish since she was born from the sea when Cronos severed Uranus’ genitals and threw them into the water.

In a later episode in her life, she was able to escape from the giant sea monster Typhos by turning herself into a fish and swimming away.

The peoples of the Pacific region have many beliefs and stories about fish. For example, the Polynesian Ika-Roa believe that some gods can change into fish. Hawaiian shark gods are also believed to have similar abilities.

The fish is an important symbol in Christian belief, and it appears several times in the scriptures.

To Christians, fish represent the abundance and charity of Christ thanks to the famous story about the two miracles when Jesus feeds thousands of people with only a few loaves of bread and some small fish.

In another story, Jesus told his first disciples that they would become “fishers of men”.

A giant fish also appears in the Old Testament when it swallows the prophet Jonah before spitting him back out on shore three days later – although, in some versions, it is said to be a whale rather than a fish.

Partly due to the prominence of fish in the Bible, early Christians used the fish symbol known as the ichthys as a secret way of identifying one another to escape from persecution.

This symbol was also chosen because the Greek word for fish, ιχθυς (ichthys), was an acronym for Iesous Christos, Theou Huios, Soter – meaning “Jesus Christ, Son of God, Saviour”.

In Buddhism, fish are one of the eight sacred symbols of the Buddha and represent joy, happiness, liberation from the expectations that are placed on us by society and the freedom to move.

Two fish represent inner harmony and peace as well as the ability to overcome any challenges or problems as easily as a fish swimming through water.

In Hindu belief, Matsya is the fish avatar of Vishnu and appears in a creation myth.

One day, a boy named Manu keeps a small fish safe by placing it in a jar. Then, when the fish outgrows the jar, he puts it in a larger container. Later, he needs to put it into a water tank and finally into the sea.

Since the fish was really Vishnu, he helps to save the boy when a great flood covers the land. As a reward, he gives Manu the power of creation, which he uses to recreate life again when the flood subsides.

This is just one version of the story. There are many others, and the details often change, but the general theme of the story is always similar.

One particular symbolism comes from the fish’s close association with water. Water, and especially the sea, is thought to represent the deep unknown, our unconscious mind and the truths we seek on our spiritual journeys.

This dark mystery can seem frightening or intimidating, but the fish can be our guide in this unknown realm and so is seen as a stabilizing force that can give us courage and help when we are in doubt.

Sometimes people are afraid to explore the spiritual side of life, but fish symbolize the ability to dive into the depths in search of the truth.

The healing properties of water are well known, and fish can symbolize the healing power of the water element.

Water also cleans and cleanses, so fish have also come to symbolize the power to wash away our doubts and fears, especially when talking about the spiritual realm.

Due to the number of eggs fish lay when they spawn, they also symbolize fertility, which is similar to some more traditional beliefs.

The symbolism of different types of fish 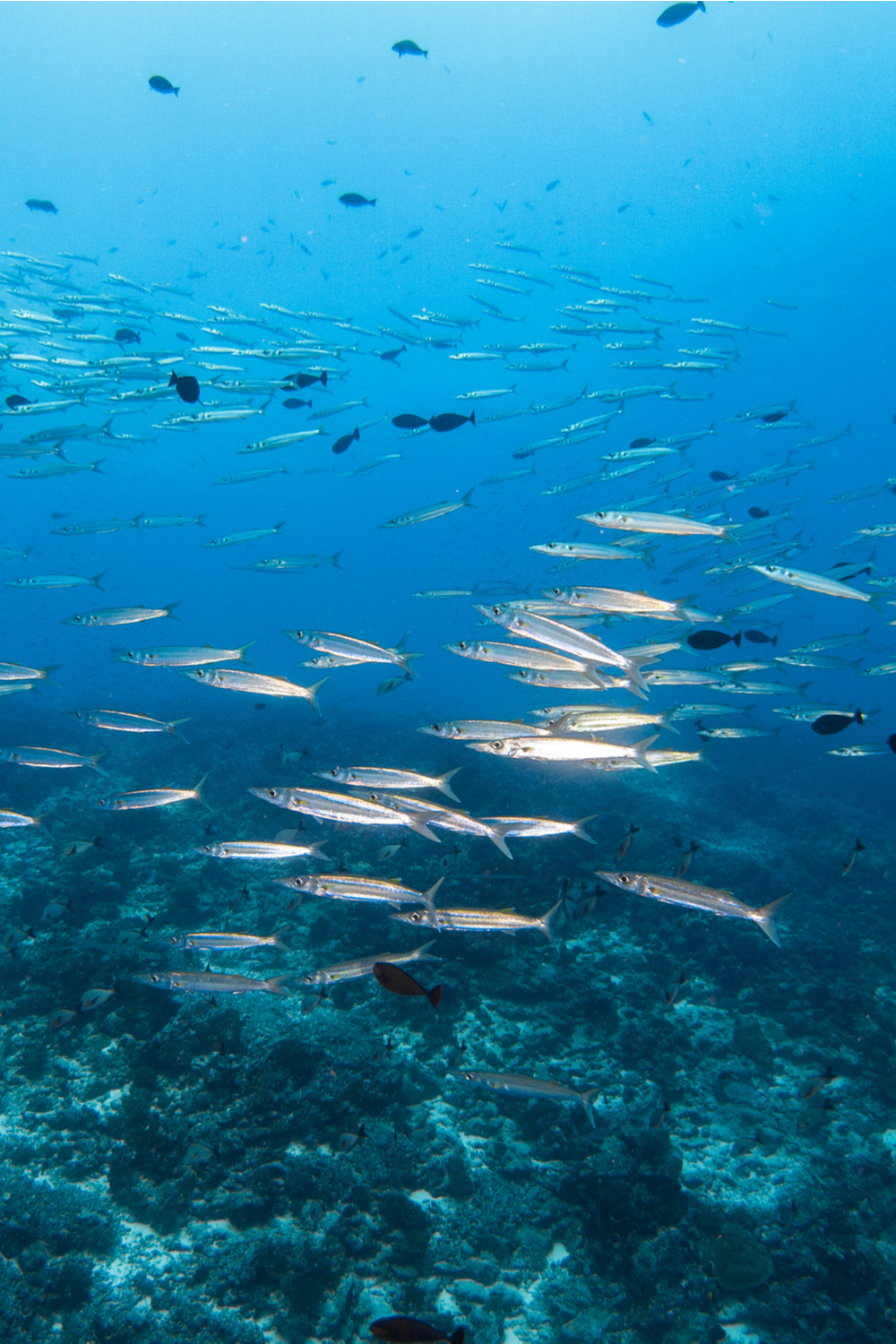 So far, we’ve been talking about fish in general, so now let’s look more closely at the symbolism of specific types of fish.

We have seen that salmon are important in various cultures, especially in Native American and Celtic beliefs.

However, due to their single-minded drive to swim upriver to reproduce, they also symbolize determination, bravery and the willingness to succeed in an endeavor, whatever the cost or risks to oneself.

When catfish spawn, they lay huge numbers of eggs, so this fish in particular is a symbol of fertility and abundance.

They are also a symbol of psychic ability, spiritual awareness and spiritual development due to their ability to “see” their surroundings using electroreceptive sensors.

We have seen that carp, including koi, represent good luck and fortune. They are also symbols of individuality, change and ambition due to their solitary nature.

Swordfish are majestic fish that represent speed, power, bravery and decisiveness. They are also able to regulate their body temperature, so they are a symbol of being able to adapt to make the most of new situations.

Sharks symbolize many things, but among the most important are power and authority. Sharks are known to travel great distances, so they can also symbolize travel and adventure.

To many people, sharks represent danger and fear of the unknown. Due to their highly developed senses, like the catfish, they also symbolize spiritual development and higher levels of perception.

However, when we call someone a “shark” it means they are a devious or ruthless person who is always on the lookout for opportunities to take advantage of others.

Important to many cultures and traditions around the world

Fish are important to many people around the world, both as a source of sustenance and in terms of spiritual symbolism.

They are connected to fertility, abundance, spiritual mystery, our unconscious mind, healing and cleansing, and they have appeared in the stories and mythologies of countless peoples since the very dawn of time. 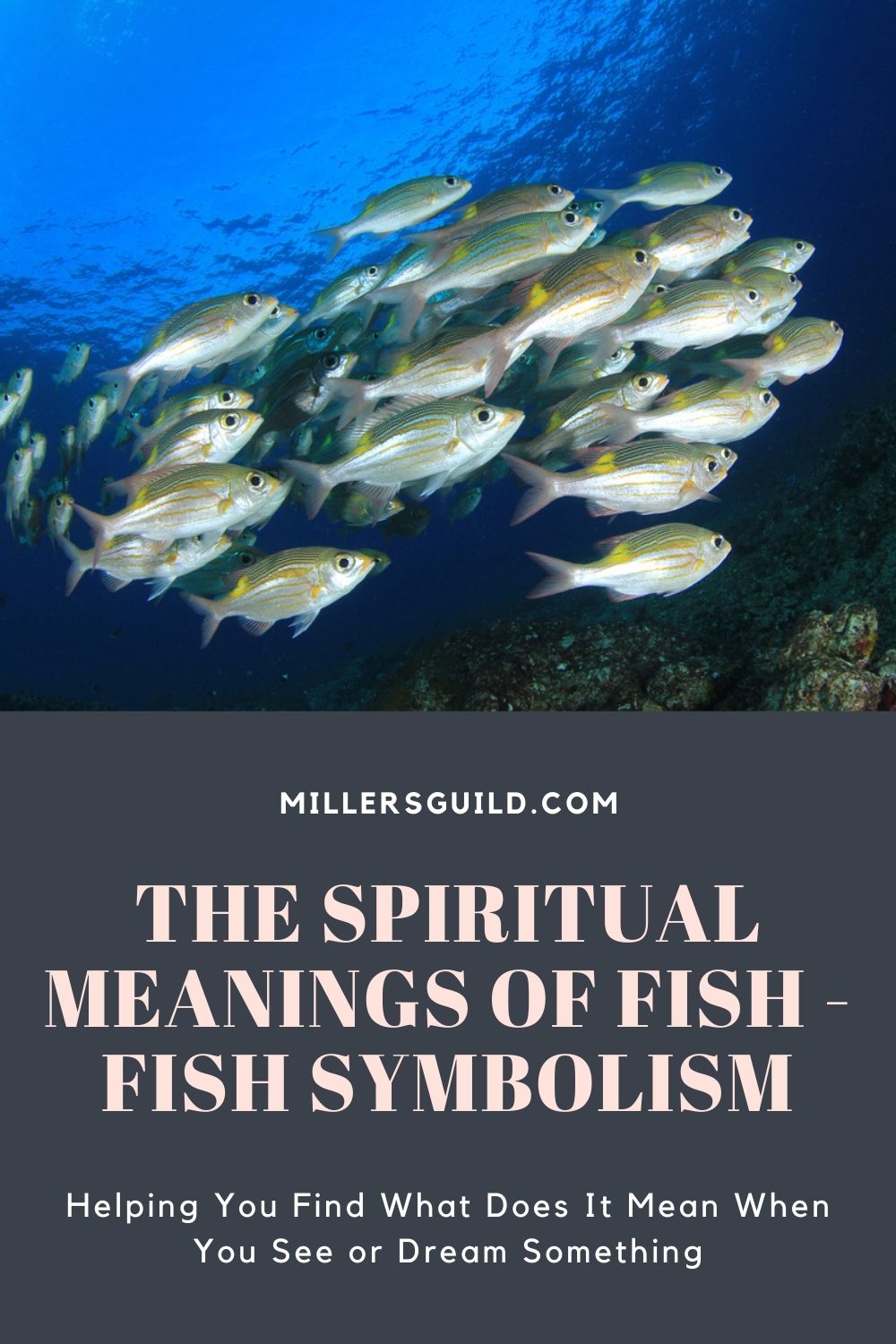