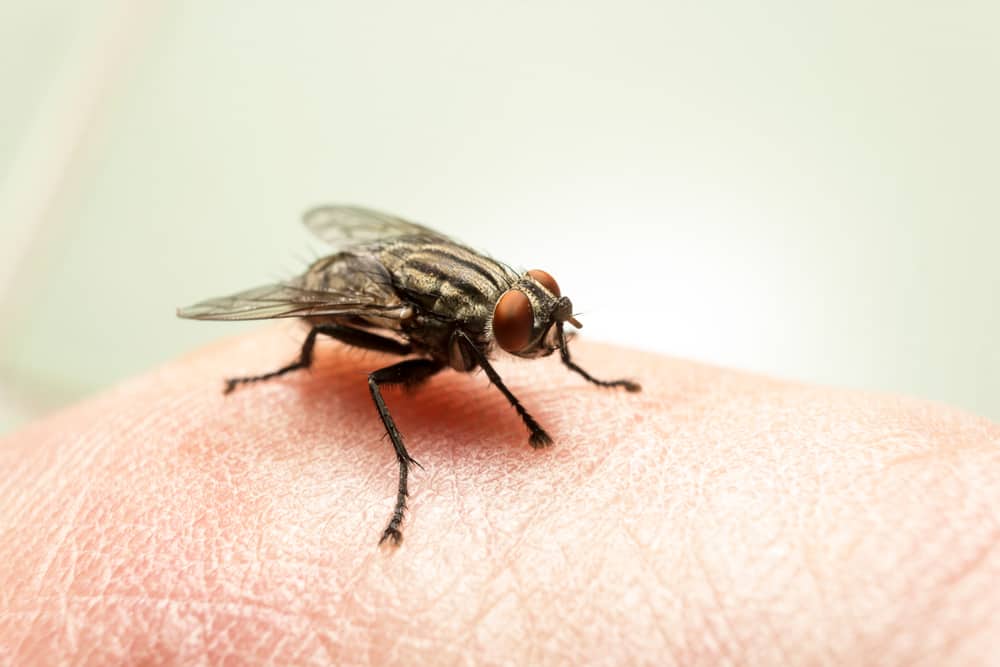 Flies exist all over the world and are found just about everywhere humans have made their homes. People have lived with flies from the dawn of time, and for most people, they are irritating, dirty creatures that we’d rather do without.

Generally speaking, flies don’t feature as prominently in the mythologies of various cultures as some other animals, but they do appear – so in this post, we look at fly symbolism and what it means if you see a fly in your dreams or in real life. 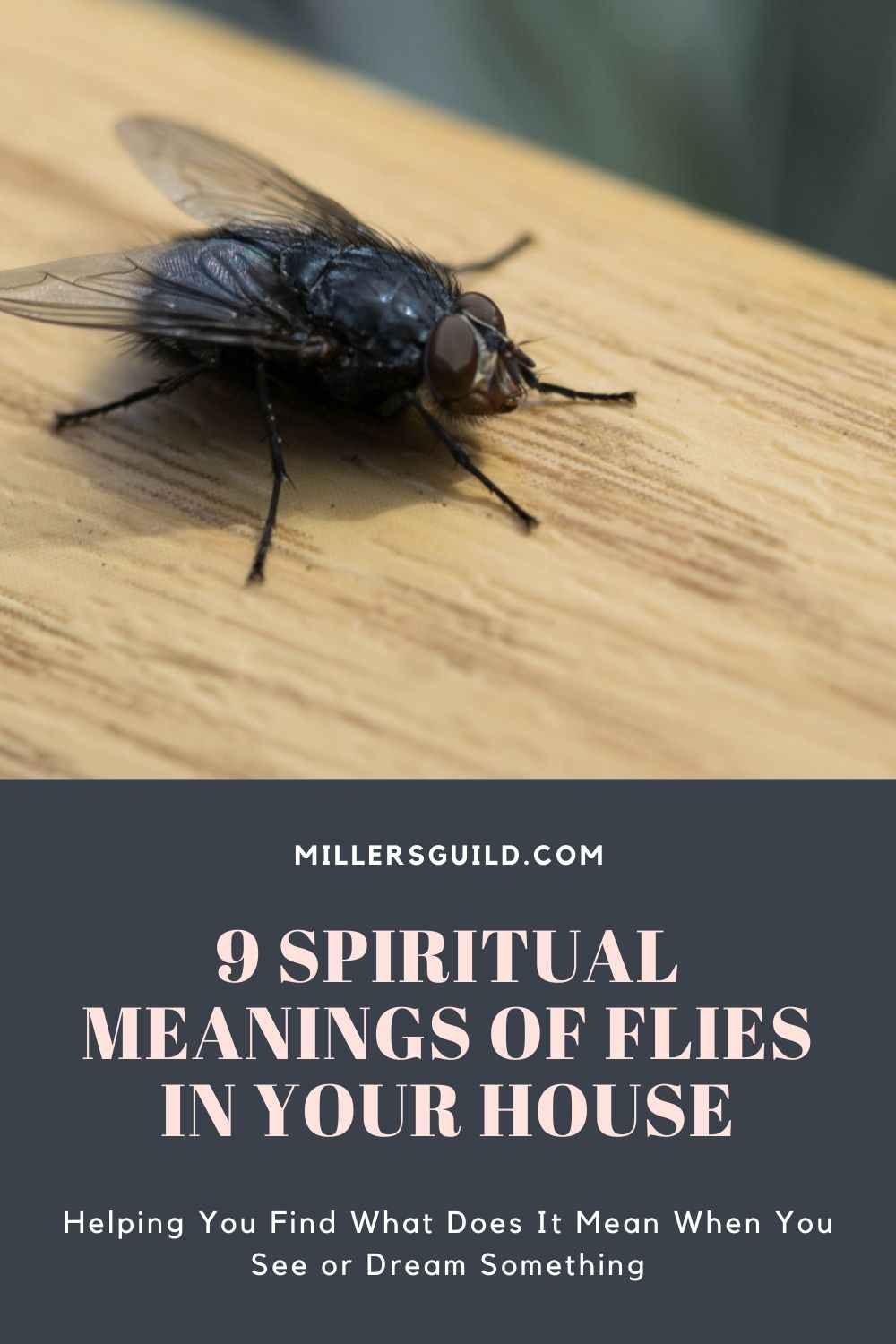 Before we look at what flies have symbolized to different cultures through the ages, let’s think about the different associations we have with flies that have helped give them this symbolism.

When you think of flies, the first thing that comes to mind is that they are dirty. They fly around, landing on dead animals or excrement, and this association with dirt plays a big part in how we see flies.

They are also associated with death since they seek our dead or rotting flesh to lay their eggs. This also means they are associated with plagues and disease because they can easily spread germs, causing people to fall ill.

However, not all of the associations we have with flies are negative. While a buzzing fly can be extremely annoying, they never seem to give up or go away, so a more positive connotation is of perseverance and persistence.

Also, while they may be associated with death, carrion and disease, when they lay their eggs on rotting meat, new flies emerge in the form of maggots, and while that can seem disgusting, they can also be seen as representing transformation or rebirth.

Finally, we also have a well-known expression about being a “fly on the wall”, and this refers to their ability to remain silent and listen to what’s going on without disturbing anyone – so they can also represent being a good listener.

Due to these contrasting positive and negative characteristics, flies have been seen as symbolizing different things in different cultures around the world, so let’s look at that now. 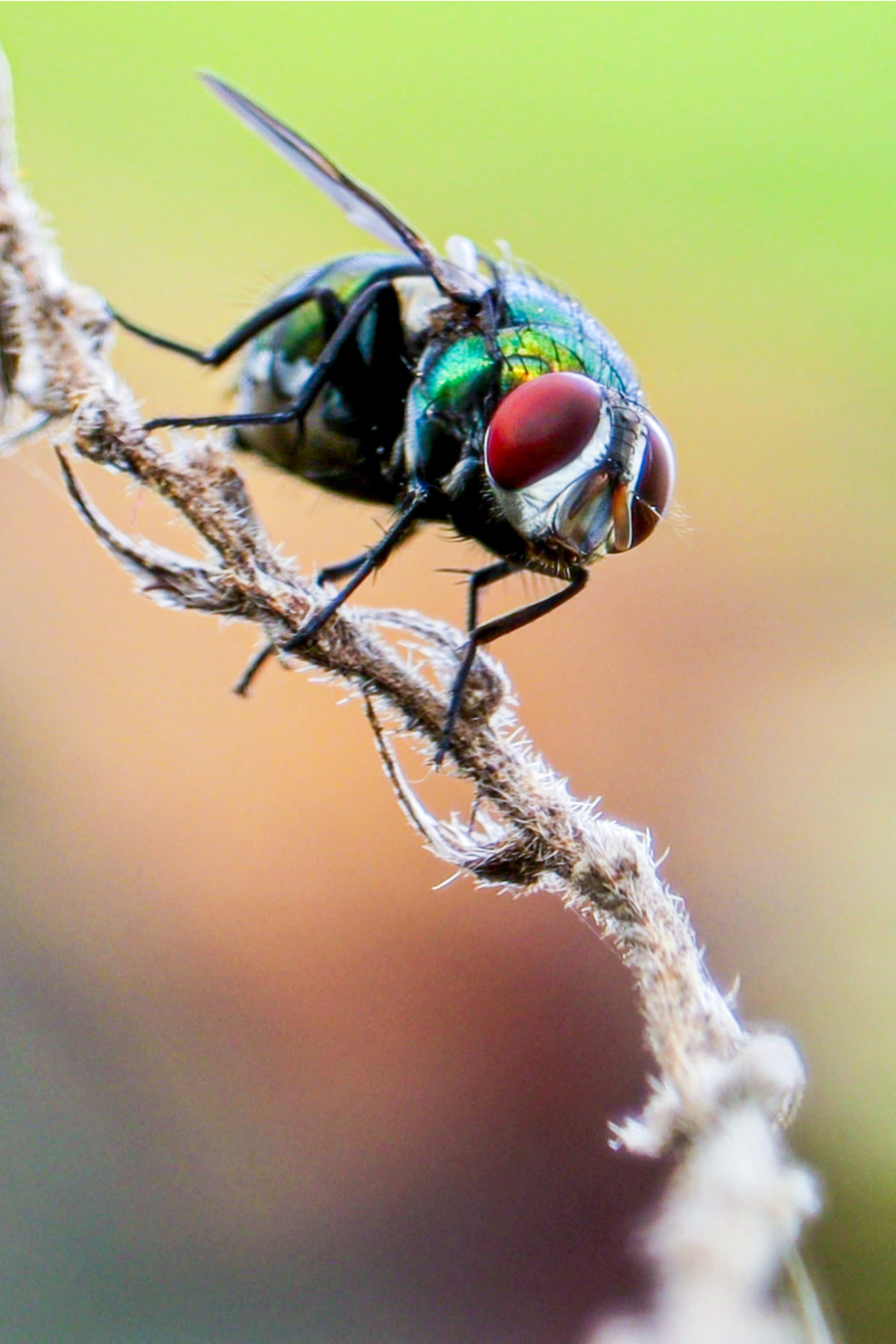 Although much of what flies symbolize is negative, they have some positive associations too. Here is how they have been seen at different times throughout history:

Flies don’t feature frequently in Ancient Greek mythology, but one story tells that Zeus, the king of the gods, turned his mistress Io into a heifer to hide her from his wife, Hera.

However, Hera discovered the deception, and to exact her revenge, she sent a gadfly to sting Io to torment her for the rest of her days.

The most prominent mention of flies in the Christian tradition is that Satan is described as the “lord of the flies”.

This reinforces the perception of flies as being scavengers and parasites that are associated with death, disease and rotting flesh– and above all, evil.

They also appear in the Bible in the form of plagues. When the Egyptians refused to release the Israelites from slavery, they were visited by plagues sent upon them by God, the fourth of which was a plague of flies.

Although in the Bible, flies were sent to torment the Egyptians as a punishment, in Ancient Egyptian mythology, they carry a different symbolism.

The Ancient Egyptians appreciated their persistence and determination as well as their bravery, all qualities that are highly valued in soldiers.

For this reason, soldiers were given fly amulets to reward them for displaying such characteristics, much in the same way that modern soldiers are decorated with medals.

Flies were also associated with rebirth and the afterlife, which were constant preoccupations for the Ancient Egyptians.

When maggots hatched, the resulting flies were seen as the soul leaving the body, so fly amulets were also used to keep the body and soul together to help the deceased person reach the afterlife safely.

As part of a Chinese origin myth, maggots emerged from the body of the primordial being and turned into people, thus giving rise to the human race.

In Sumerian mythology, flies make an appearance as helping the goddess Inanna find her husband Dumuzid in the underworld by revealing his location after a demon had chased him there.

In Mesopotamia, the fly was associated with Nergal, the god of death, war and plagues. Flies can be found on seals depicting this god, and it’s safe to say, they had negative connotations.

Flies are not one of the most prominent symbols in Native American traditions, but they do occur – and the meaning varies according to the tribe.

Often, they symbolize death, curses and black magic, but to some Native Americans, they are seen as message bearers. Some also believe that flies were responsible for teaching man the secrets of fire.

For the Navajo, they are connected to the spirit ancestors, and Big Fly is the protector of sand painting, watching over artists while they work.

In Hopi tradition, flies were associated with prayers for fertility as well as keeping strangers away.

Flies don’t appear often in Celtic mythology, but they were probably associated with death disease – and also with transformation and rebirth. Flies and especially maggots were avoided since they were thought to be carriers of disease. 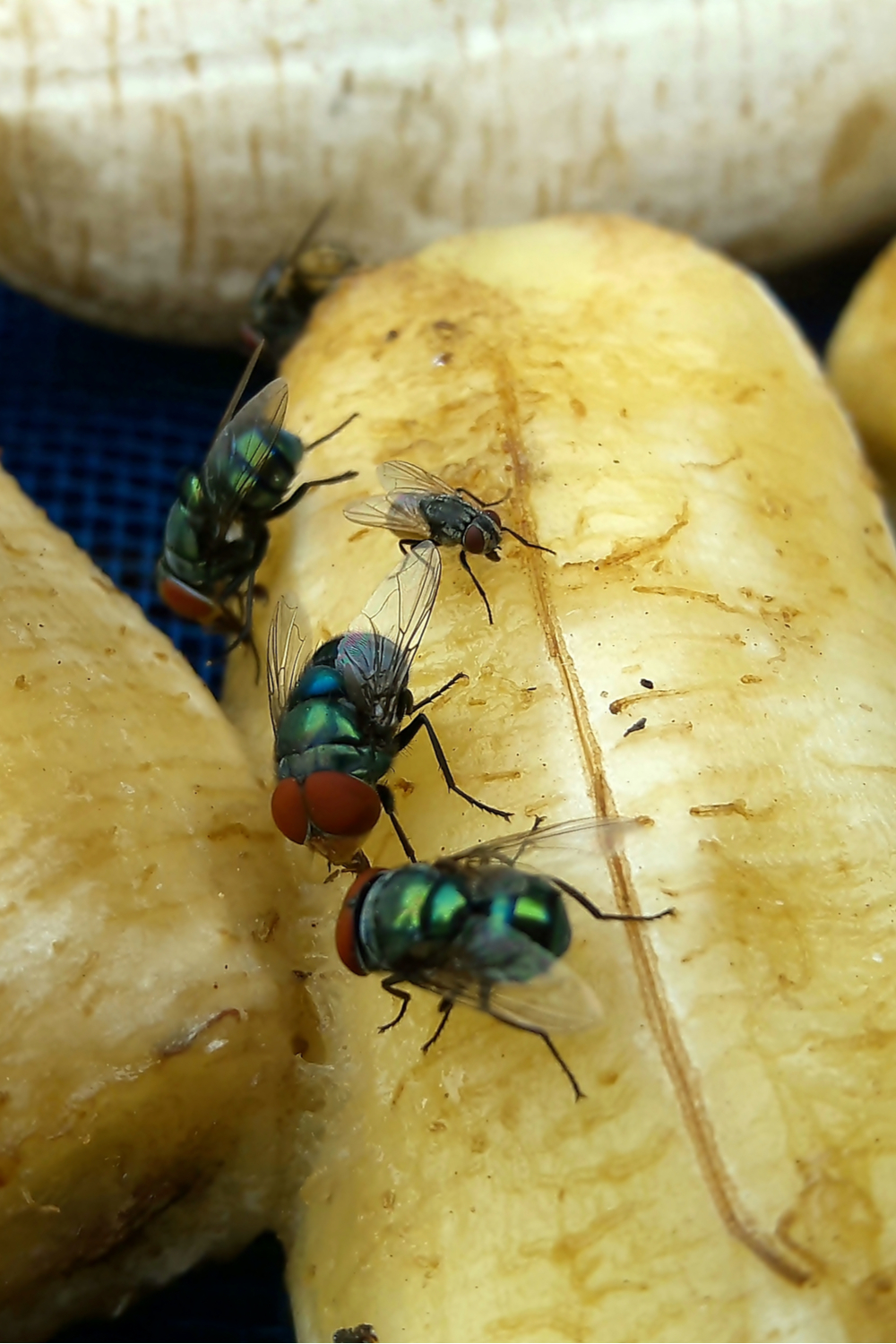 If you dream of flies or you find you often encounter flies in real life, there is a good chance it represents a message from the spirit realm. However, interpreting the message is not always easy since seeing flies can have a variety of meanings.

This means that to interpret the message, you need to know about the common significations that seeing flies can have, but you also need to think about the specific details of what you saw as well as what was going on in your life at the time and what issues you were dealing with.

That way, by taking the time to think deeply about what you saw – perhaps through meditation – and trusting your intuition, the meaning of seeing flies will be revealed to you.

Here are some of the common meanings it can have when you see flies:

1. Something bad about to happen

Although as we have seen, in some cultures, flies can have positive connotations, they are more commonly reviled, and this can mean that seeing a fly in a dream or repeatedly seeing flies in real life can be an ominous sign that something bad is about to happen.

When the spirit world tries to communicate with you, the messages are always ones that you will be able to understand, so to interpret the message, you need to think about how you feel about flies.

If you find flies repulsive and annoying, seeing them can be taken as an ill omen that something unwelcome is going to happen.

2. A premonition of death

Similarly, flies can also tell you of an impending death due to their association with death, disease and rotting meat.

It can be difficult to know whether seeing flies is telling you that someone is going to die, and sometimes you can only know the true meaning of the message after the event.

3. A premonition of change or rebirth

Is a phase of your life coming to an end and a new one about to start? Then seeing flies, either in a dream or in real life, could be a message telling you to look to the future with a positive mindset since the change in your life may bring you unexpected opportunities.

4. Encouraging you to let go of something or someone

Alternatively, the message might not be that something is about to change but that you should make the change yourself.

Is there something in your life that you need to give up? Is there a bad habit you would be better without? Or is there a person in your life who is having a bad influence on you and who you should think about letting go of?

This kind of message will take deep thinking, self-reflection and meditation to interpret, but if you look inside yourself and trust your intuition, you will find the answer to your questions, and it’s then up to you to take the necessary action.

5. People around you causing you trouble

Sometimes, we absently swat at flies without fully realizing they’re there, but that buzz around the edge of our consciousness is always there, preventing us from fully concentrating and achieving our goals.

Consider whether there is someone in your life who is annoying you or causing you stress without you fully realizing it. And if you find that there is, it might be a good idea to consider cutting that person – and their negative energy – out of your life completely.

6. Encouraging you to be persistent and determined

One of the positive associations of flies is their persistence and determination, and sometimes, having a fly buzzing around you can be a reminder that you should stick at certain tasks with determination too.

Is there something you’re trying to achieve at the moment? Are you losing heart and thinking about giving up? Are you struggling to find the motivation to see it through to the end?

If you are facing something like this in your life, the fly may be a reminder to you that you need to knuckle down and keep going – because you’ll be glad you did in the long run.

7. Somebody is trying to get your attention

Sometimes when a fly is buzzing around our head, we do our best to ignore it. However, the fly won’t go away and instead just keeps on flying in our face.

This could represent someone who is trying to get your attention who you aren’t paying attention to. Who could it be? Do you have a secret admirer? Or maybe it’s because you’re neglecting a friend? Perhaps you haven’t been replying to messages recently?

Think about this carefully since if you’re not careful, an important friendship could be damaged because you are failing to notice the person and nurture that friendship.

8. Fear of losing something or somebody

In a similar vein, a fly could be a symbol of your fear to lose somebody – or something.

Perhaps there is a person who you are afraid to lose. You don’t feel confident about the strength of your relationship and the fly is a manifestation of your fear that you will lose them.

Another possibility is that you are worried about losing your job. Perhaps things aren’t going too well at work at the moment, and there is a nagging fear that you are going to be fired.

If this is the case, rather than worry about it, you should consider taking positive steps to consolidate your position – or perhaps you should think about leaving your job and finding another one that suits you better and doesn’t leave you feeling stressed all the time.

9. Flies in the house

If you have a fly – or swarms of flies – in your house, it can mean that a stranger wants to meet you. This is related to the Hopi interpretation of what flies can mean.

However, it can also be a warning that something bad is about to happen, so look inside yourself and think about how you felt when you saw the flies to interpret this message correctly.

A usually unwelcome visitor with a range of symbolic meanings

Although flies are generally unwelcome visitors due to their association with dirt, disease and death, they have had a range of symbolic meanings to various cultures around the world.

If you see a fly, either in real life or in a dream, take time to reflect and think deeply, and if you trust your intuition, you will be able to interpret the message correctly. 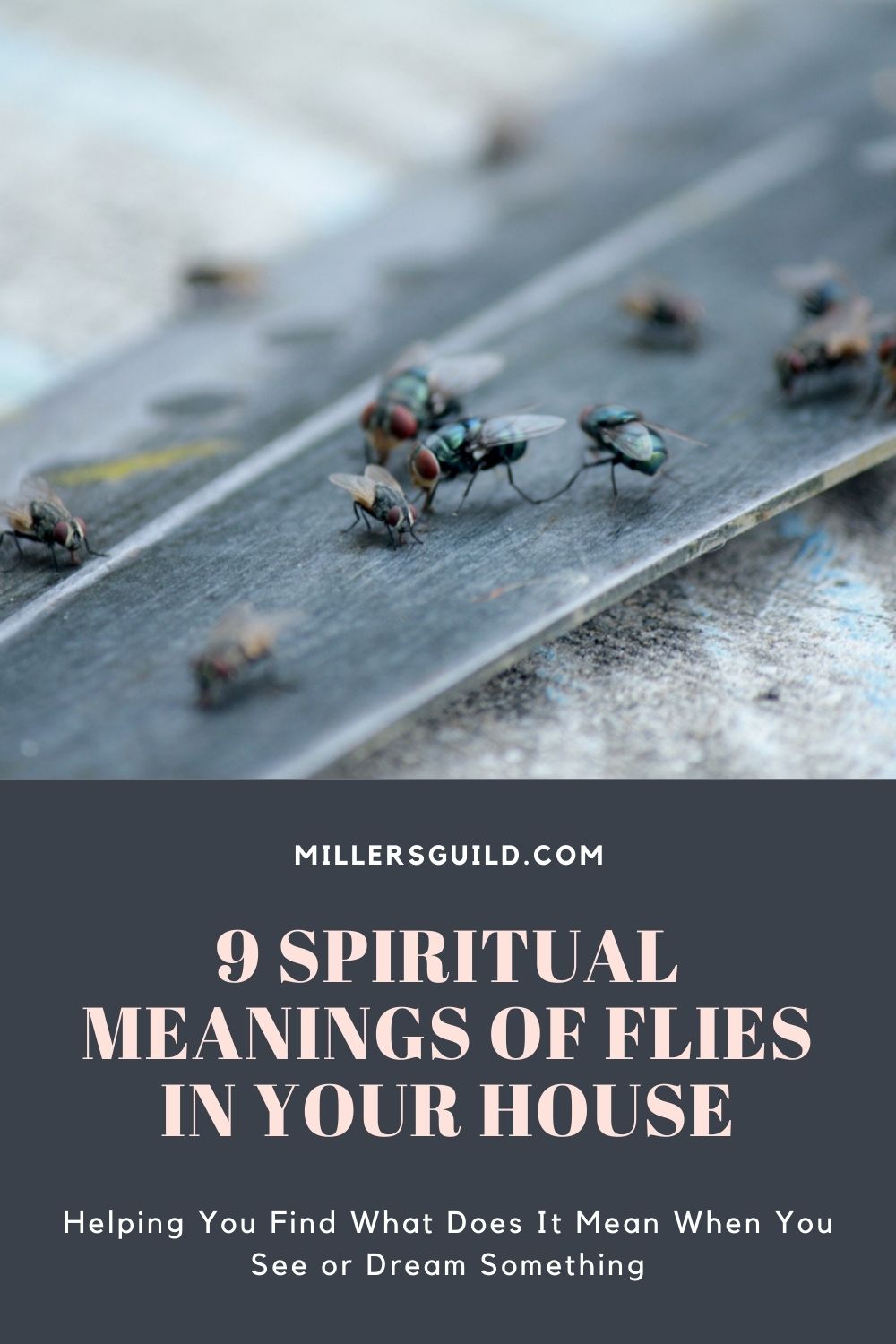 13 thoughts on “9 Spiritual Meanings of Flies In Your House”