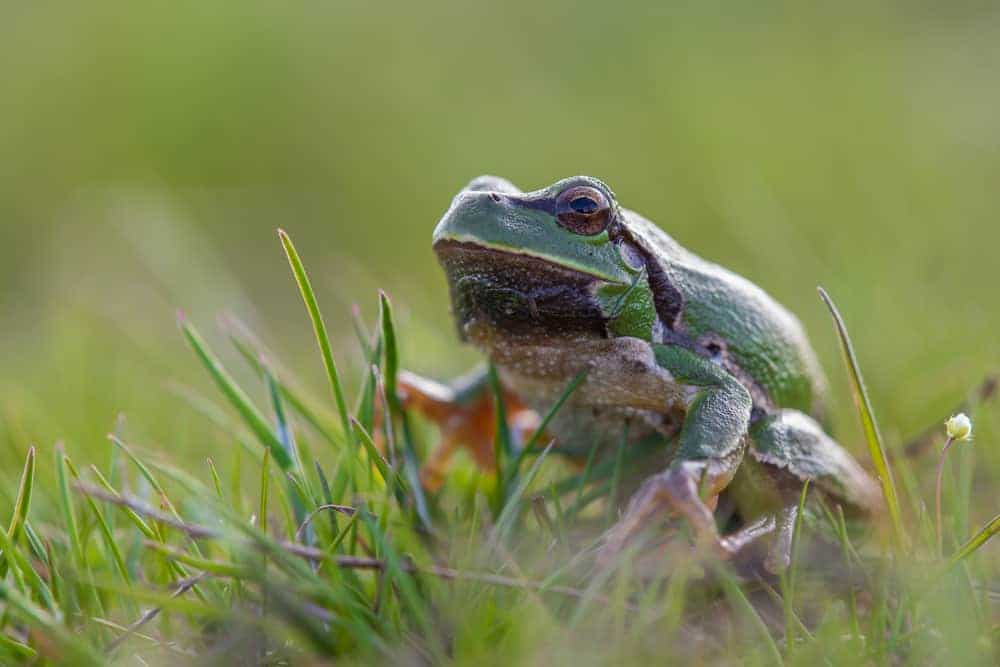 If you’ve had a dream that you’ve remembered clearly on waking, it might be trying to tell you something! So how do you go about unraveling its meaning?

If your dream featured frogs, you’re in the right place! We’re going to look at what these cute little reptiles can symbolize to your dreaming mind. And we’ll explore some different scenarios they might appear in.

So if you’re ready, let’s check out 17 meanings when you dream about frogs … 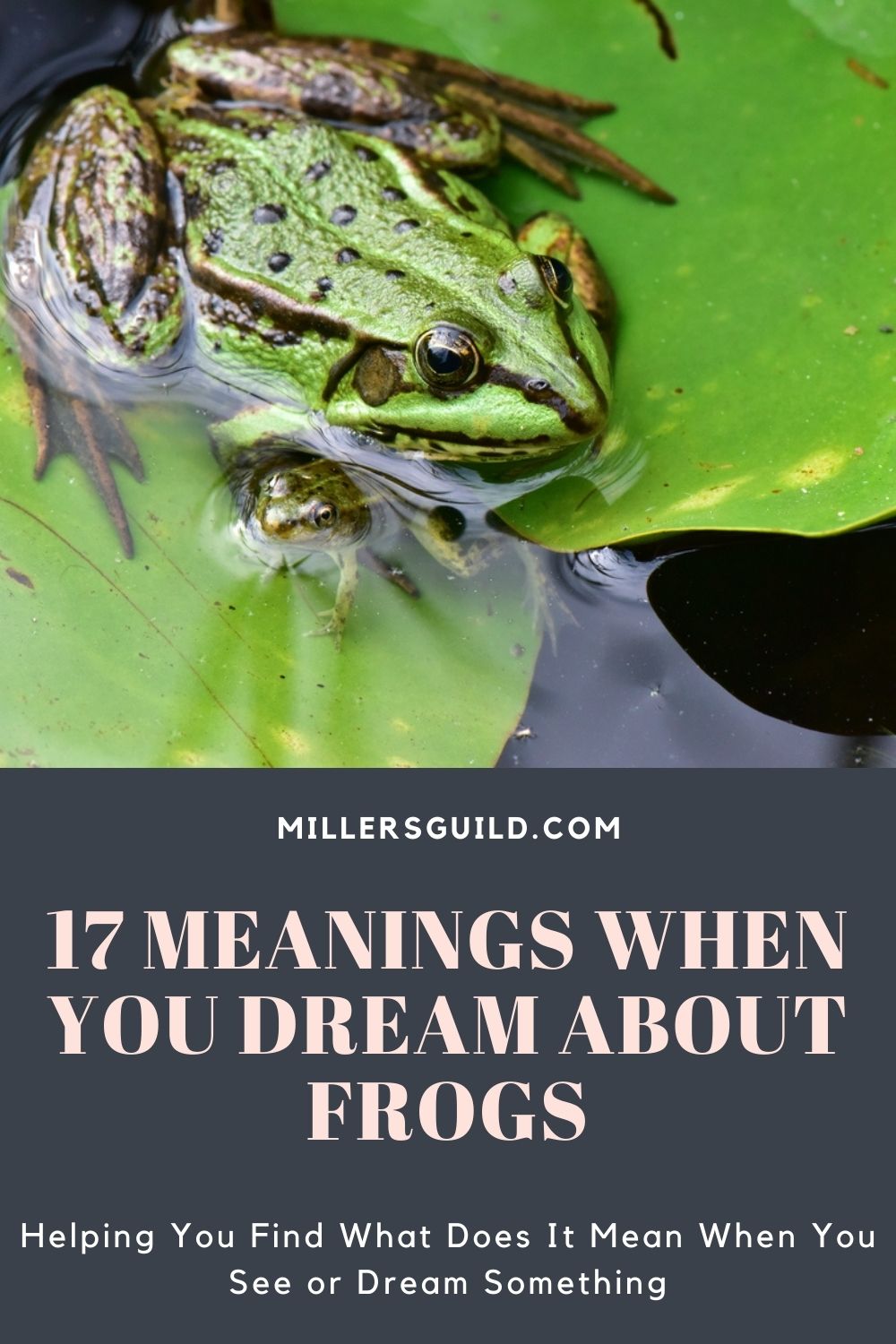 What does it mean when you dream about frogs?

In dream interpretation, water is often believed to symbolize the psychic world, while land represents the material world. As creatures who are at home in both, frogs can transcend the boundaries between the two. That means they can carry both spiritual and practical meanings.

Frogs also have a place in traditional storytelling. The story of a frog who turned into a prince when kissed by a princess is well known to children.

It’s even passed into everyday language. Ever heard of the expression, “You have to kiss a lot of frogs”? The implied ending is, “Before you find your prince”!

So frogs can appear in our dreams in connection with love, especially romantic love.

Frogs can also symbolize change. The growth of a frog from a tadpole is one of the more dramatic transformations in the animal kingdom. So its appearance in our dreams can herald big changes on the way.

All this means that you may be faced with many different options when it comes to interpreting your dream! To help narrow things down, let’s explore a few of the scenarios in which your dream frog might appear.

If there are lots of frogs croaking in your dream, it could represent the voices of those around you.

Some people believe that this dream foretells that you will have many guests in the future. These might include people you’ve lost touch with or haven’t seen for some time. Your dream could also be a reminder to renew those connections.

Others believe it’s a good omen of security in your future. That security will come from having people you love around you.

If the croaking is harsh or unpleasant to listen to, however, there may be a different meaning. It could indicate conflict amongst the people close to you.

In the real world, frogs clearly don’t fly! So what does it mean if your dream reptile was gliding through the air?

Air can be seen as representing the intellect. So this dream could signify your intuitive thoughts coming to the surface, where you can examine them with your rational mind.

It could also signify that you are about to attain a new perspective on a situation. Like the frog transported from its normal environment, you’ll be able to see things in a fresh way.

Some people also see it as a sign that you’re making progress towards achieving your ambitions. Success lies ahead.

Dreams that involve laying eggs are obvious signs of fertility and reproduction. Where a frog is laying the eggs, it could be a sign of future happiness. For pregnant women, it could also reflect their focus on preparing for the new life they’re bringing into the world.

Your dream could, however, have a more oblique meaning. It could be that the eggs here represent creative energy, new projects and ventures. These could be arising from your inner thoughts and desires, as represented by the frog.

Consider which of these meanings resonates with your personal circumstances. That’s usually a good sign as to which is the correct interpretation.

4. A Frog Being Sick

A dream of a vomiting frog is – thankfully – not particularly common. But if you do have this dream, it’s thought to have an unusually specific meaning. And if you’ve recently purchased something expensive, that meaning may not be good news …

The sickly frog is thought to signify the need to return stolen goods to their rightful owners! We’re going to assume that you had no knowledge of the origins of your prized possessions. But this dream suggests it’s a good idea to find out more about where they came from! 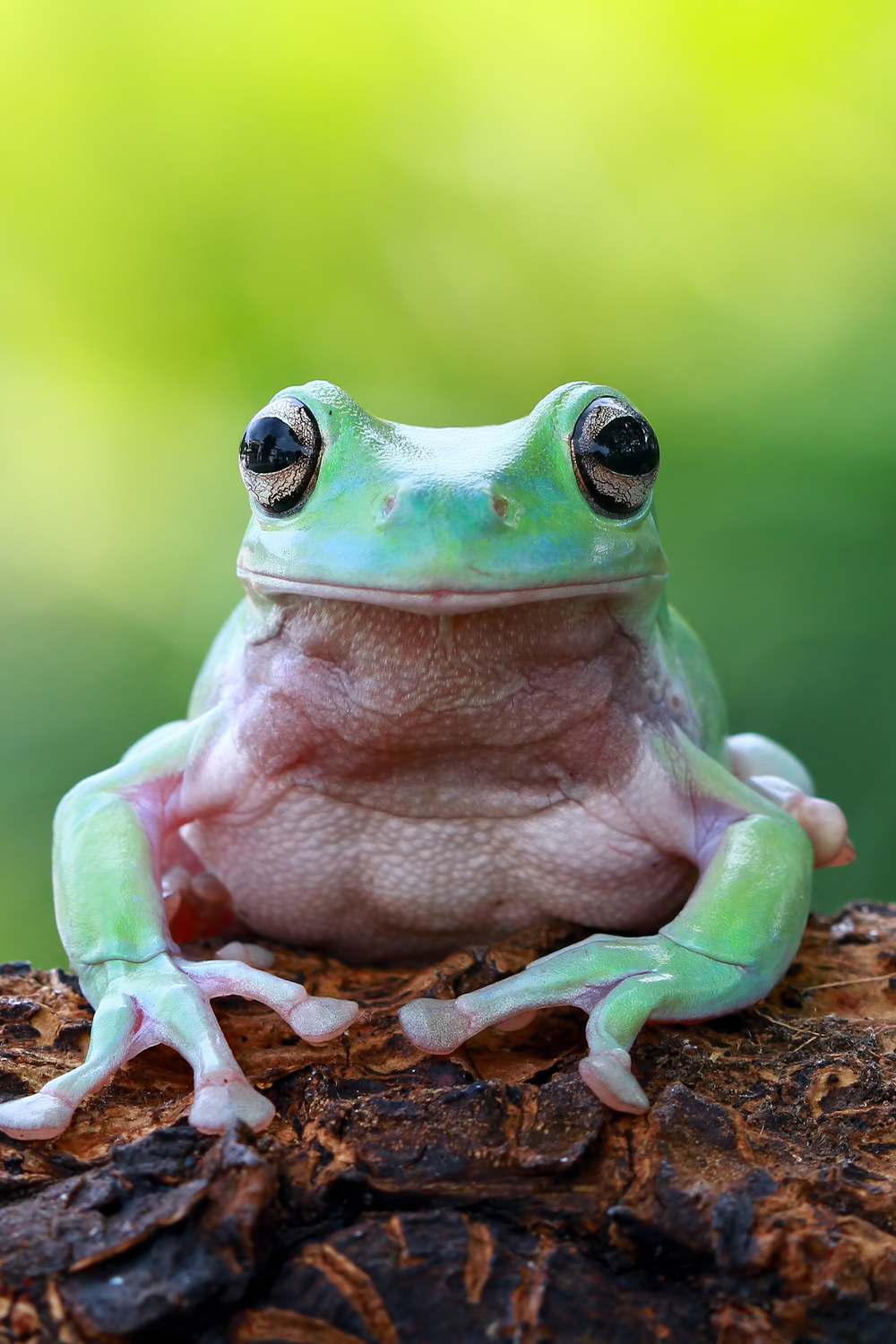 Dreams in which an animal or object talks to you are surprisingly common, and they can take many forms. In this case, it’s less important that the talking creature is a frog, than that it’s talking directly to you.

Dreams of this kind almost always signify a direct message from your unconscious mind. It’s using the dream creature to convey thoughts or advice. These have been gleaned from your own experience and intuition. Your brain is replaying them to you to make you pay attention.

Another interpretation is that the dream frog is acting as a supernatural messenger. That would mean the guidance comes from a source with superior knowledge.

But wherever you believe the advice comes from, it’s a good idea to listen to it carefully!

Dreams in which you’re chasing after a frog can indicate that you’re experiencing rapid change. You may be struggling to adjust, chasing after something that has already passed you by.

If, on the other hand, the frog is chasing you, it could mean that you feel pursued by inner fears. Your dream may be prompting you to examine those fears. Until you confront them, you will not be able to move on.

Eating a frog is thought by some to be an emblem of authority. The authority at present sits with someone else, but it is being transferred to you through the act of eating. This is similar to some traditions that hold that by consuming an animal you gain its powers.

Others believe that eating a frog is a sign that you will have a peaceful and successful life. But it could also mean that you are facing an unpleasant task. If you find the frog tasty in your dream, it suggests you’re making the best of a bad situation.

All these interpretations could apply where you’re wolfing down the whole frog. But some dreams feature eating only the legs.

This could link back to the idea of consuming the powers of the creature. After all, frogs are known for their impressive jumping abilities. But it’s also thought that this dream might mean you need to impose your authority on other people.

Dreaming of a frog in your mouth could mean your brain is playing with words. We sometimes talk about having a “frog in your throat” when someone’s voice is hoarse. This could be your unconscious mind using this imagery to reflect problems with communication.

Your dream may be encouraging you to overcome your fear and say what’s on your mind.

9. Stepping on a Frog

If you’ve dreamed about stepping on a frog, it could indicate necessary action to achieve your goals. The frogs are acting as metaphors for obstacles in your way. Your brain is encouraging you to take a direct approach in order to overcome them.

Some people also maintain that this dream means you need help with financial problems.

If the frogs you’re stepping on are croaking, you may have to tune out negative voices. Pay no attention to what they’re saying, and keep moving towards your goal.

Dreams in which you kill animals are – perhaps surprisingly – generally seen as good omens. You’re overcoming enemies, or even successfully defeating the “wild” parts of your own personality.

Dreams in which you kill a frog broadly conform to these meanings. But there are some variations.

Some people believe it can presage the death of a loved one. And depending on the circumstances, it could signify problems in romantic relationships. 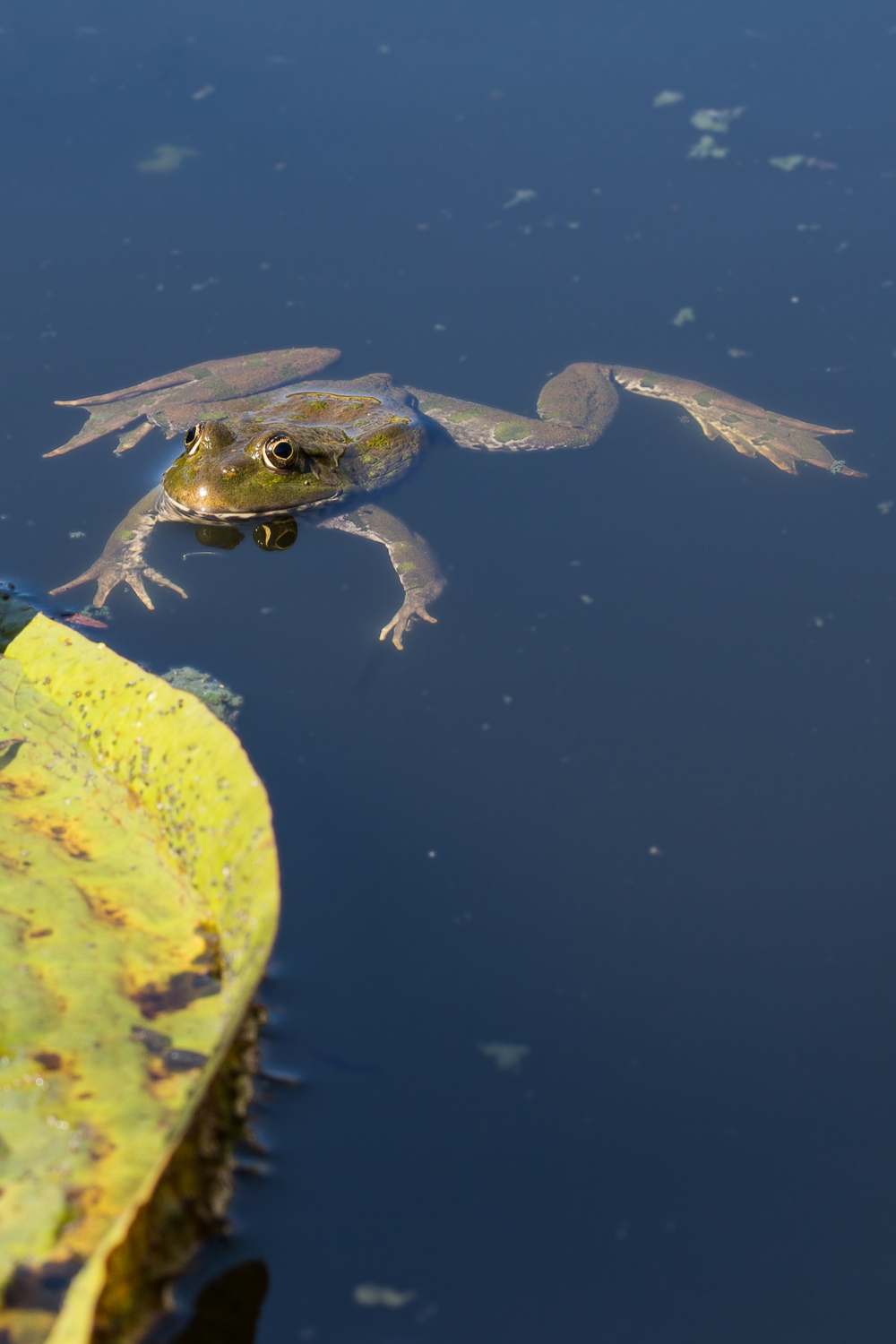 The location of the frog in your dream can also be important in divining its meaning.

A frog in water can be interpreted in a number of ways. You may be taking refuge from worries that will soon pass. Alternatively, it may be a reflection that you’re in your element – you’ve found an approach to defend yourself from trouble.

The frog might also refer to a desire for travel or adventure. There could be a journey in your future.

And if the frog is in a pond, some people believe it’s a sign you’ll soon receive an unexpected guest.

Dreaming of a frog outside water doesn’t, as you might expect, have a similar meaning to a “fish out of water”. If the frog in your dream is sitting on a rock or pebble, it suggests opportunity could be coming your way.

Those opportunities are particularly likely to arrive in a business context. Be ready to take them, and you could achieve great success.

13. A Frog Sitting in Grass

A frog in grass is pretty difficult to spot! If you’ve seen one in your dream, it could be an indication that you’re hiding your true feelings.

And because frogs can be associated with love, it might be that you’re hiding your romantic interest in someone. Your dream could be prompting you to be brave and declare your feelings. Yes, you risk rejection – but it’s just possible they feel the same way!

If the frog is closer to home, it could mean visitors are coming your way. That’s particularly likely to be the case if the frog – or frogs – are hopping around on your doorstep. And get ready to receive them, because your dream might be the only notice you get that they’re coming!

An alternative interpretation is that it’s good news that’s on its way to you. This dream could augur future success or financial rewards.

15. A Frog in Your Bathroom

We know that frogs are at home in wet environments. But what if your dream frog has appeared in your bathroom?

Some people believe that the arrival of the reptile points to a lack of cleanliness. But frogs aren’t unclean creatures. A dream that was warning you about poor hygiene is more likely to feature a creature with an image of being dirty. Rats would be the obvious dream symbol here.

Instead the frog could relate to your own feelings about privacy. Perhaps you’re anxious that someone is encroaching on your personal space.

If the frog in your dream appears in your bed, it could have romantic connotations. We all know the story of the Frog Prince. This dream could indicate that you hope your current romantic attachment turns out to be the real thing.

It could also signify a reconciliation with an ex-partner. Although you know they’re a frog not a prince, you might be tempted to give things another try.

And whoever your new partner is, dreaming of a frog in bed signifies a new relationship. It might not last forever – but you’ll have fun while it does.

The color of the frog in your dream can also affect its meaning. If your dream frog is the common-or-garden green variety, the color isn’t significant. But if it’s an unusual shade, it may add an additional dimension to your interpretation.

Black or dark colored frogs could signify loss, grief or emotional darkness. Golden frogs are thought to symbolize future success, although that might come after pain. White frogs signify purity and good luck. Pink frogs are thought to augur learning and spiritual growth.

The Varied Meanings of Frogs in Dreams

That brings us to the end of our round-up of the many and varied meanings ascribed to dreams of frogs.

When interpreting your dream, it’s important to consider all the details. Note where you saw the frog, and any unusual aspects of its appearance. And note down the emotions you felt in your dream too.

All this information can help guide you to an accurate interpretation. And that can help you achieve valuable new insights into your feelings and situation. 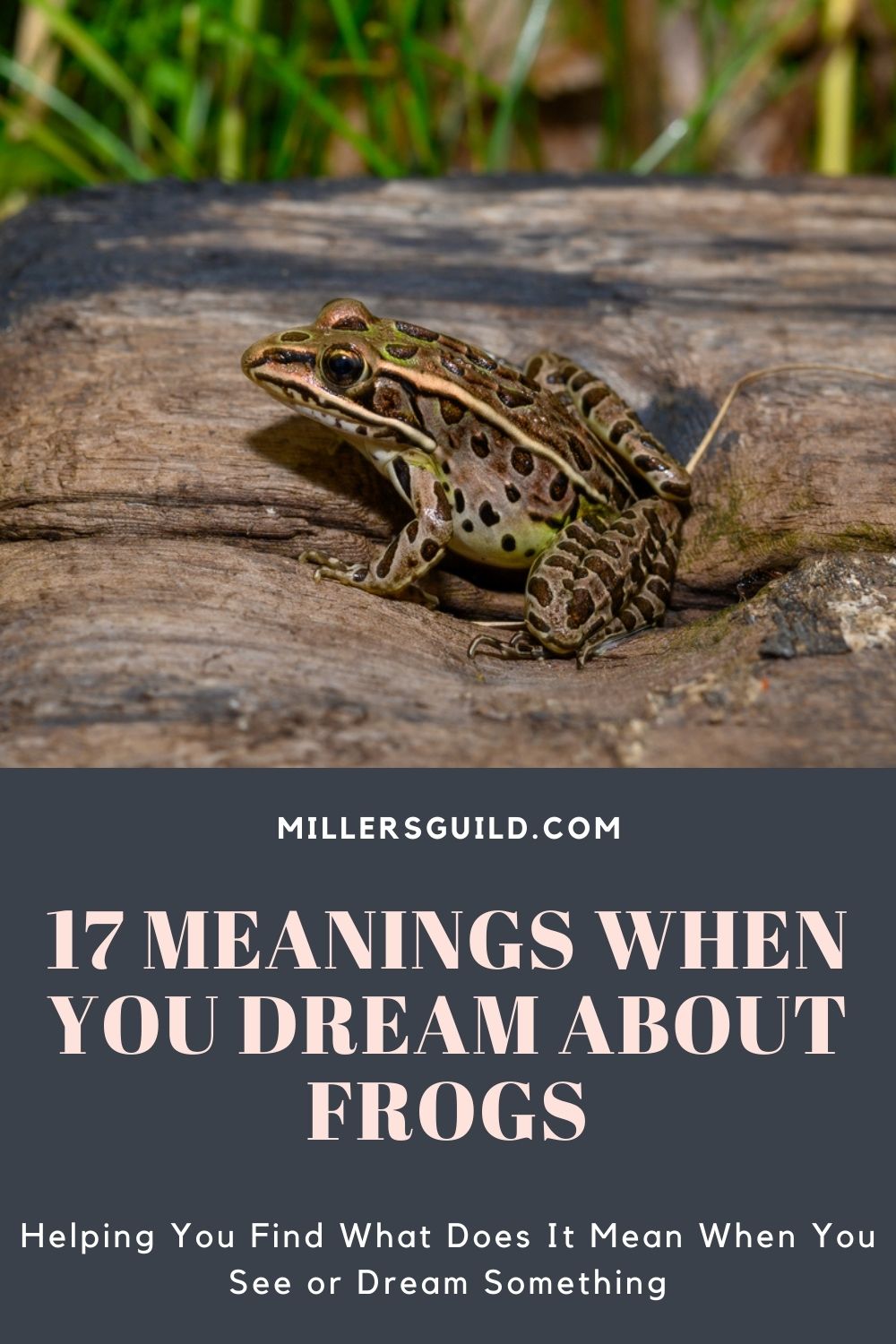 17 thoughts on “17 Meanings When You Dream About Frogs”