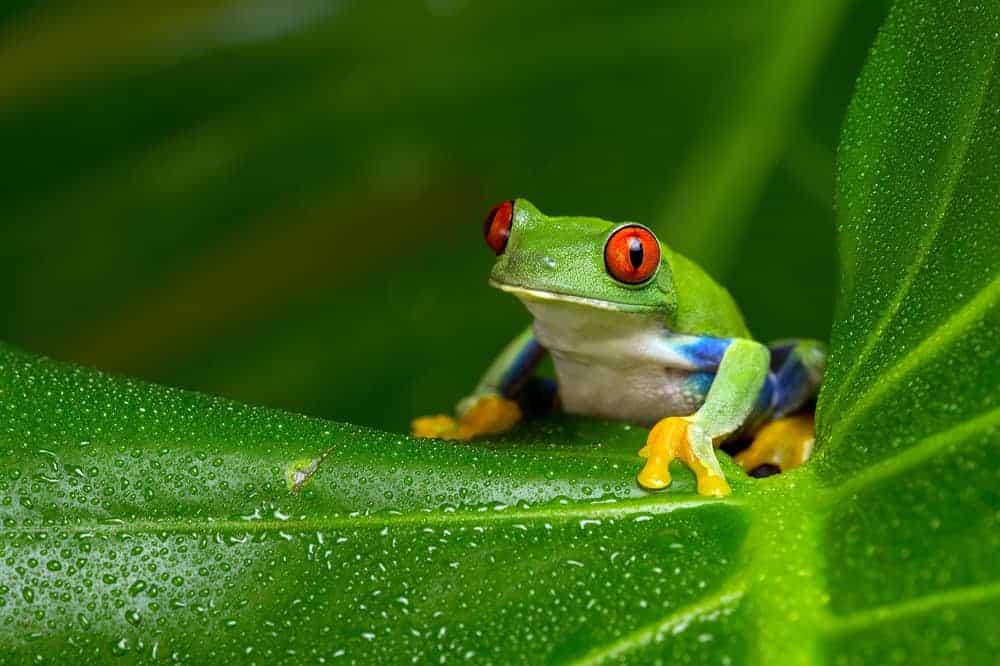 Frogs are found all around the world and have been here for far longer than we have, so it’s unsurprising that they have featured in the traditions and beliefs of a variety of different peoples down the ages.

For anyone who wants to know more, in this post, we discuss frog symbolism and what frogs have represented in different cultures – as well as talking about what it means if you see a frog in real life or in a dream. 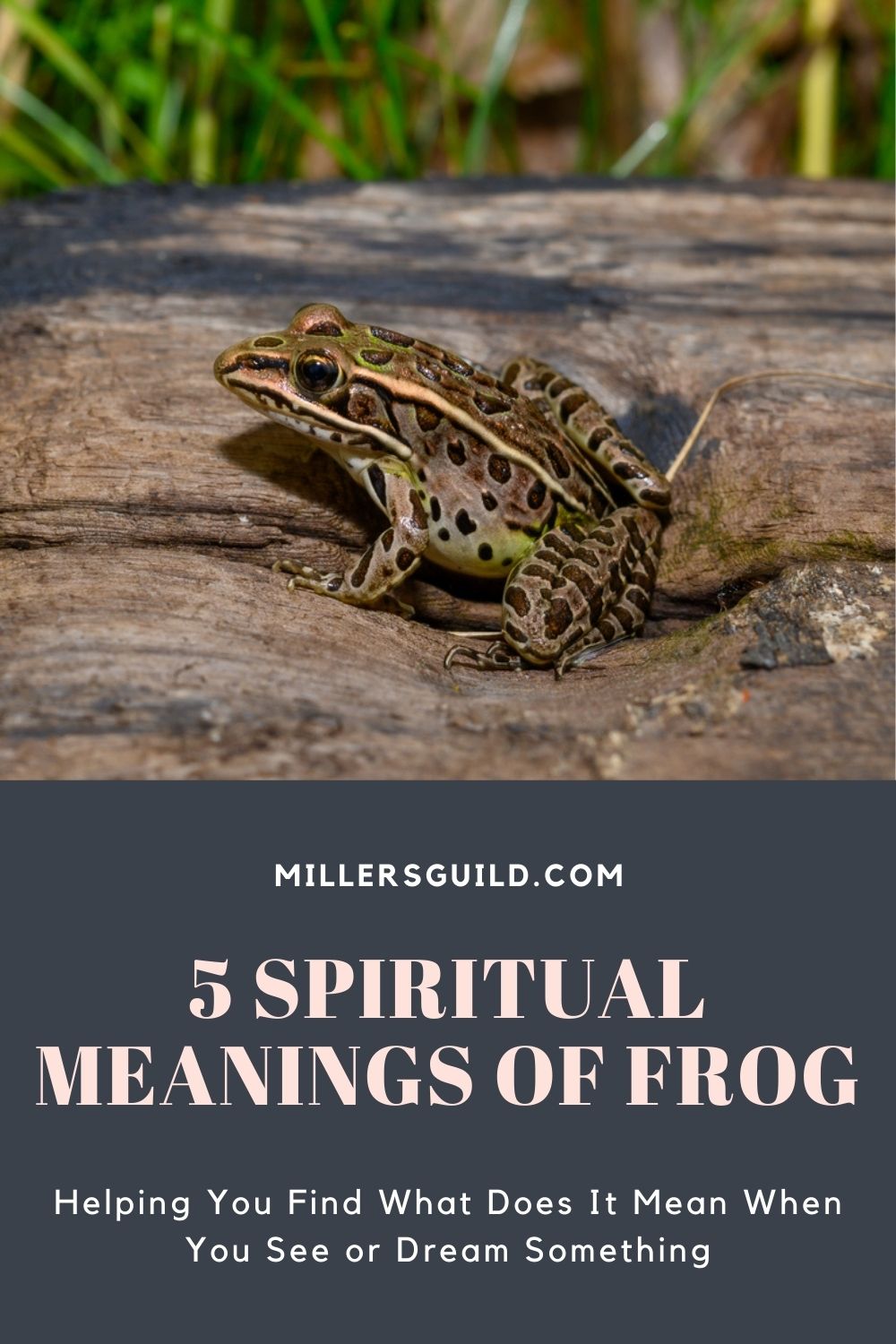 what do frogs symbolize?

Before we look at what frogs symbolize according to different cultures and traditions, it will be useful to talk a bit about their characteristics and the kind of things we associate frogs with.

For many people, the first thing that comes to mind when we mention frogs is related to their life cycle.

Frogs lay large numbers of eggs – known as frogspawn – that hatch out into tadpoles. These tadpoles grow until they are ready to undergo a metamorphosis, and eventually, they lose their tails and grow legs, completing the transformation into adult frogs.

Due to this transformation, man people associate frogs with change and evolution, but because of the large number of eggs they lay, they are also connected to fertility and abundance.

Another important feature of frogs is that, since they are amphibians, they live both in water and on land. This has an obvious spiritual connotation since they can represent a link between the earthly and the spiritual realms.

As we will see in a moment, frogs and toads appear in many legends and folk tales, and many people associate them with the world of witchcraft and magic.

Many frogs from tropical regions are brightly colored, warning predators of the powerful poisons they contain, so to some people, frogs may also be associated with danger.

Frog symbolism according to various cultures 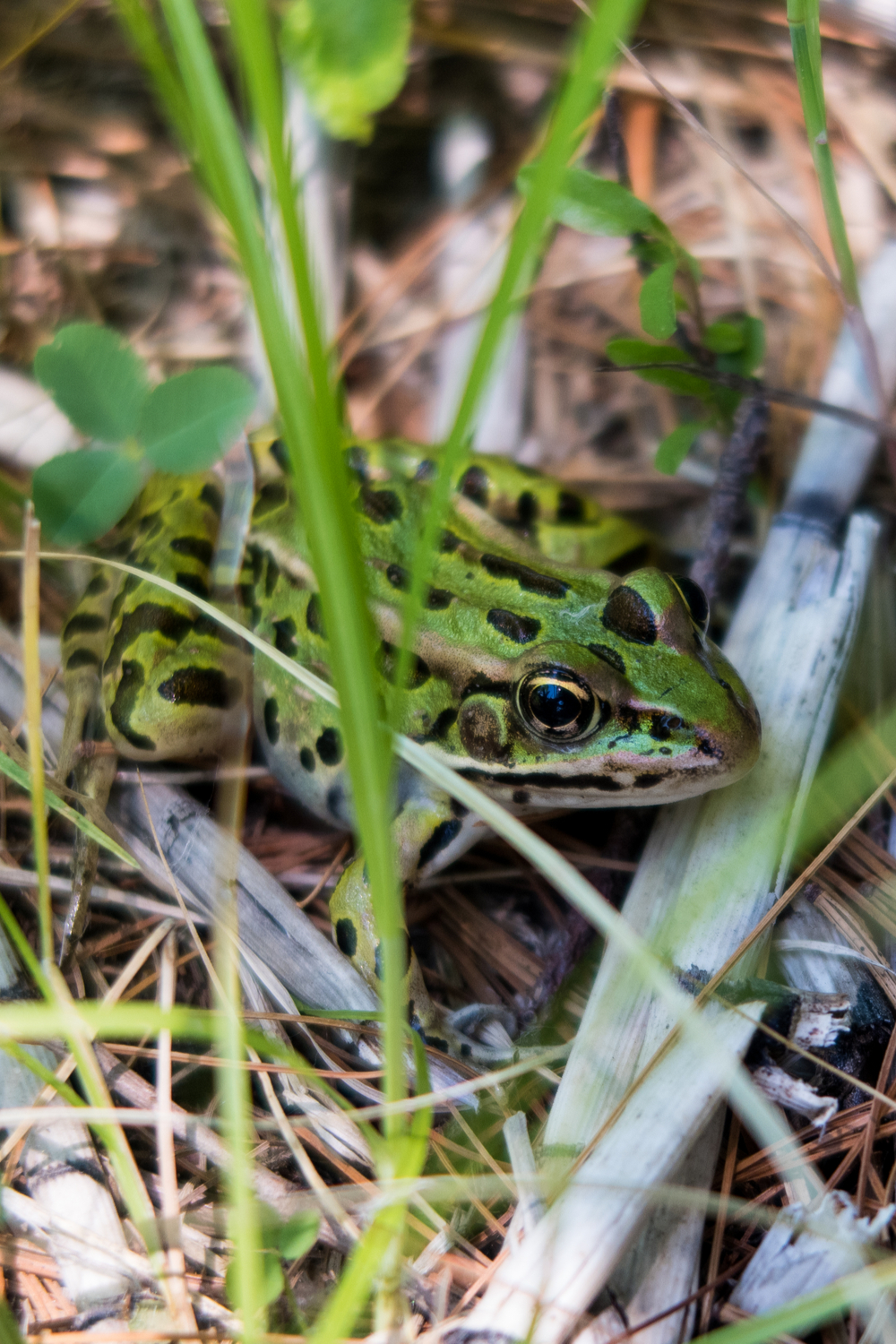 Frogs are found in almost all parts of the world, and as such a distinctive and curious animal, it’s no wonder they feature prominently in the legends, myths and folktales of a wide range of cultures, so let’s have a look at this in more detail now.

Although different Native American tribes have varying traditions and beliefs, many of them see frogs as being related to rain and freshwater as well as renewal and growth.

This meant that when the rains were good, people felt grateful towards frogs for their help. However, during times of drought, people became resentful towards these animals.

In Panama, the golden frog is thought to bring good luck if you see one outside.

For this reason, people used to capture them, and when the frog died, they would make it into a talisman called a huaca, which would continue to bring good luck.

However, golden frogs are now extinct in the wild – perhaps partly due to these traditions and beliefs.

The Moche people of Peru and Bolivia also worshipped frogs, and they are found depicted in their art.

In East Asia, frogs are generally thought of as being lucky, and this is especially apparent in the Chinese lucky charm known as Jin Chan (金蟾), which can be translated as “money frog” in English.

Jin Chan is a three-legged bullfrog with red eyes and an extra leg at the back. He is usually seen sitting on a pile of coins with one coin in his mouth.

This symbol is thought to bring good luck and fortune, but because he represents the flow of money, he shouldn’t be placed facing the door of the house.

According to traditional feng shui, a Jin Chan should also not be placed in the bathroom, bedroom, dining room or kitchen.

The Chinese also have a saying, 井底之蛙 (jĭng dĭ zhī wā), which means “frog at the bottom of a well”.

It is used to talk about someone who has a narrow view of the world – like a frog who lives at the bottom of the well who can only see the small piece of sky at the top of the well and doesn’t realize there is a much bigger world outside.

Frogs are also frequently seen depicted in Japanese art, and like in China, they are seen as being connected to good luck and fortune.

Japanese folklore also tells of a hero named Jiraiya who traditionally rides on the back of a giant frog.

The Ancient Mesopotamians associated frogs with fertility, and one legend tells of the goddess Inanna who tricked Enki into handing over the mes or sacred decrees.

Enki sent various animals to try to take them back from Inanna, and the frog was the first to go.

Frogs had a particular significance for the Ancient Egyptians since millions of them appeared each year with the life-giving floods of the Nile.

The flooding of the Nile was arguably the most important annual event in Ancient Egypt. Without it, Ancient Egyptian civilization would never have been able to flourish, so frogs became associated with fertility and abundance.

This gave rise to certain gods that were connected to frogs. One was Heqet, a goddess of fertility who took the form of a frog.

To the Ancient Greeks – as well as the Romans – frogs were associated with fertility and harmony, but also with licentiousness.

One of Aesop’s Fables also includes frogs. In it, the frogs ask Zeus to send them a king, so Zeus sends down a log. At first, the log makes a big splash in their pond and scares the frogs, but after this, they all come out and sit on it and make fun of their “king”.

They then ask for a better king, so Zeus sends a snake – who then eats all the frogs.

The interpretation of this tale is not entirely clear, but many people see it as reminding us to be content with what we have because things can always be worse.

Some Aboriginal Australian stories tell of a mythical frog creature called Tiddalik. In the story, one day Tiddalik woke with a great thirst and started to drink all the water, and all the other animals began dying of thirst.

The wise owl came up with a plan to save everyone and told the eel to curl himself into comical shapes. At first, Tiddalik tried not to laugh, but eventually, he couldn’t help it, and when he began to laugh, all the water was released again.

According to Celtic belief, the frog was connected to the Earth, fertility and rain – and when people heard frogs croaking, they believed that the rains would soon arrive.

Frogs were also associated with healing, and a cure for a sore throat was to place a live frog in the patient’s mouth and then release it to swim away. Perhaps this is the origin of the expression “to have a frog in one’s throat”?

Frogs most famously appear in the Bible as the Second Plague visited upon the Egyptians. In Revelations, they are also associated with unclean spirits.

In Hinduism, frogs are said to protect those going through change, and they also represent the transition from dusk to evening.

In a Hindu folk tale, a king falls in love with a beautiful girl. She agrees to marry him, but only on one condition – that she never sees any water.

However, one day when she is very thirsty, she asks the king for a glass of water. But as he hands it over, she sees it and begins to melt away.

In Islam, the frog is seen in a positive light because according to Muslim belief, when Nimrod tried to burn Abraham to death, it was the frog who saved him by bringing water in his mouth.

Also, frogs symbolize faith because it is believed that when a frog croaks, he is pronouncing the Arabic words that mean “God is perfect”.

Among the most famous stories involving a frog is the story of the prince who was changed into a frog by a witch but then turns back into a prince when kissed by a princess.

There are many versions of this story, but the general idea is that the princess saw something in the frog that others couldn’t see, and when she kissed him, he transformed into the prince of her dreams.

This story is so well known that frogs have come to represent something ugly and unpleasant that hides something wonderful – and also hidden talents.

Another folk belief that comes from many parts of Europe is that the frog is related to witchcraft. This is probably partly related to the fact that frogs are active at night, and according to ancient traditions, witches used them as ingredients in magic potions.

They can also represent potential since they begin their lives as frogspawn and then tadpoles before finally transforming into adult frogs. In a way, this also echoes the story of the frog prince who was finally able to fulfil his potential after the princess kissed him.

As we mentioned above, the fact that frogs can live on land or in the water is important to some people, and frogs have come to symbolize a connection between the earthly and spirit worlds.

In more recent times, Pepe the Frog, originally a character from a comic, was appropriated by the alt-right movement and was used to symbolize their right-wing beliefs and ideologies.

What does it mean if you see a frog? 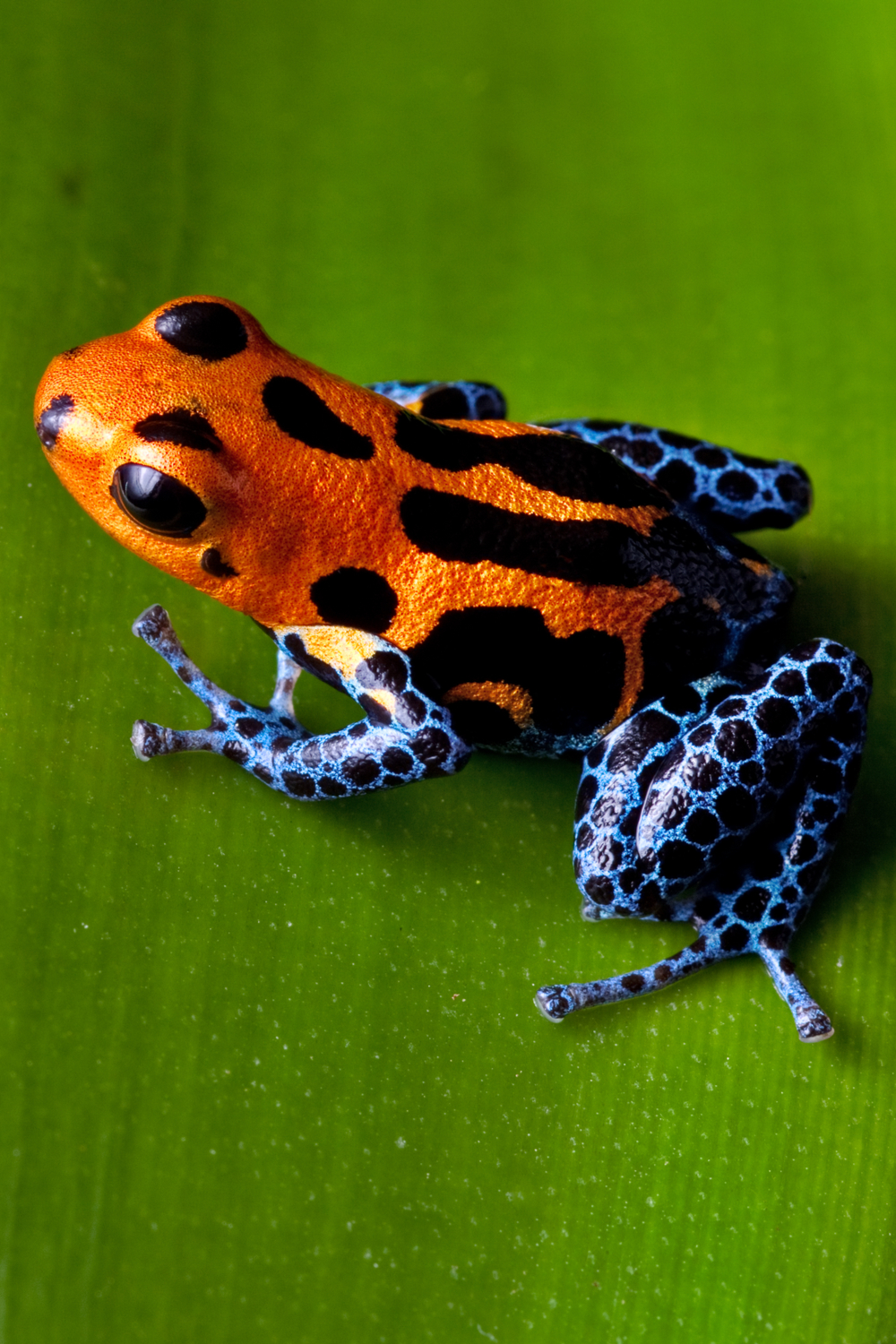 If you see a frog, either in real life or in a dream, there can be several ways to interpret it. Here are some of the most common meanings of seeing a frog.

Frogs represent change and transformation, and seeing one can tell you that change is coming in your life.

Alternatively, seeing a frog may tell you that you are currently too resistant to change and that instead you should embrace it because with change come new opportunities.

We have seen how frogs can represent fulfilling one’s full potential, so seeing one could be telling you that you are wasting your talents and that you need to find a way to release them.

Are you in a job you’re not suited to? Do you feel that you are not using your most valuable skills? Then it could be time for a change.

Alternatively, it could be related to a hobby that you are neglecting. For example, perhaps you play an instrument but have let your skills grow rusty – and seeing a frog could be a message that you should get back to practicing.

Frogs represent fertility to many people, so if you see one, it could be a message about a new child. Are you trying for a baby? Then the frog may be telling you not to give up hope since success is not far away.

4. You’re about to come into some money

As we have seen, in some cultures, especially in East Asia, frogs are associated with money – so if you see a frog, it could be good news because some money might soon be coming your way.

5. Pay attention to the spiritual side of life

Since frogs live in both water and on land, they symbolize the balance between the spiritual and the physical worlds.

We need to balance the spiritual with the material to live fulfilled lives, and if you see a frog, it can be a reminder that you are neglecting spiritual matters and need to find more time for spiritual exploration.

A positive symbol around the world

As we have seen, frogs can symbolize many things, but they are almost universally seen in a positive light.

If you see a frog, either in real life or in a dream, there can be many ways to interpret it. However, by thinking deeply on what you saw and how you felt when you saw it, your intuition will guide you to the correct interpretation of the message. 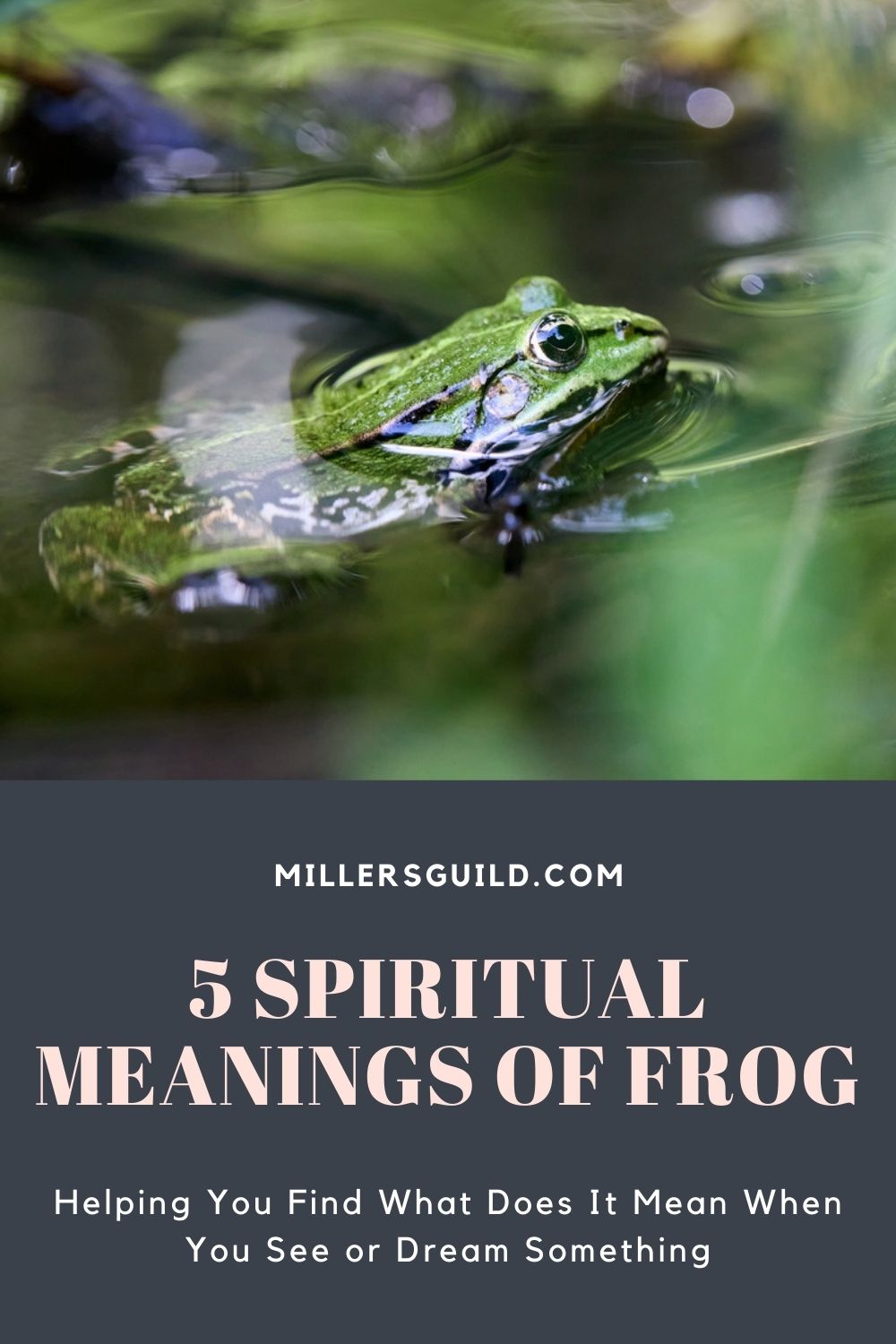