Skip to content
Miller’s Guild » What Does a Grasshopper Symbolize? (Spiritual Meanings) 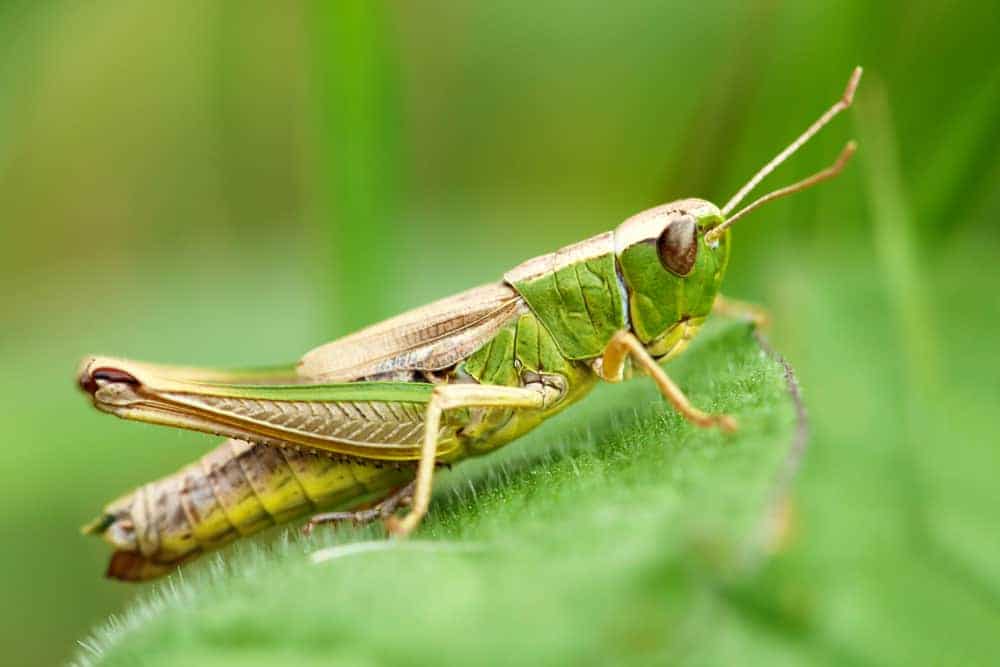 If you’ve encountered a grasshopper in a way that felt significant, you may be reflecting on its meaning. If so, you’ve come to the right place!

We’re going to look at grasshopper symbolism in different cultures and civilizations. And we’ll consider what lessons the grasshopper may hold for our lives today.

So without further ado, let’s find out more … 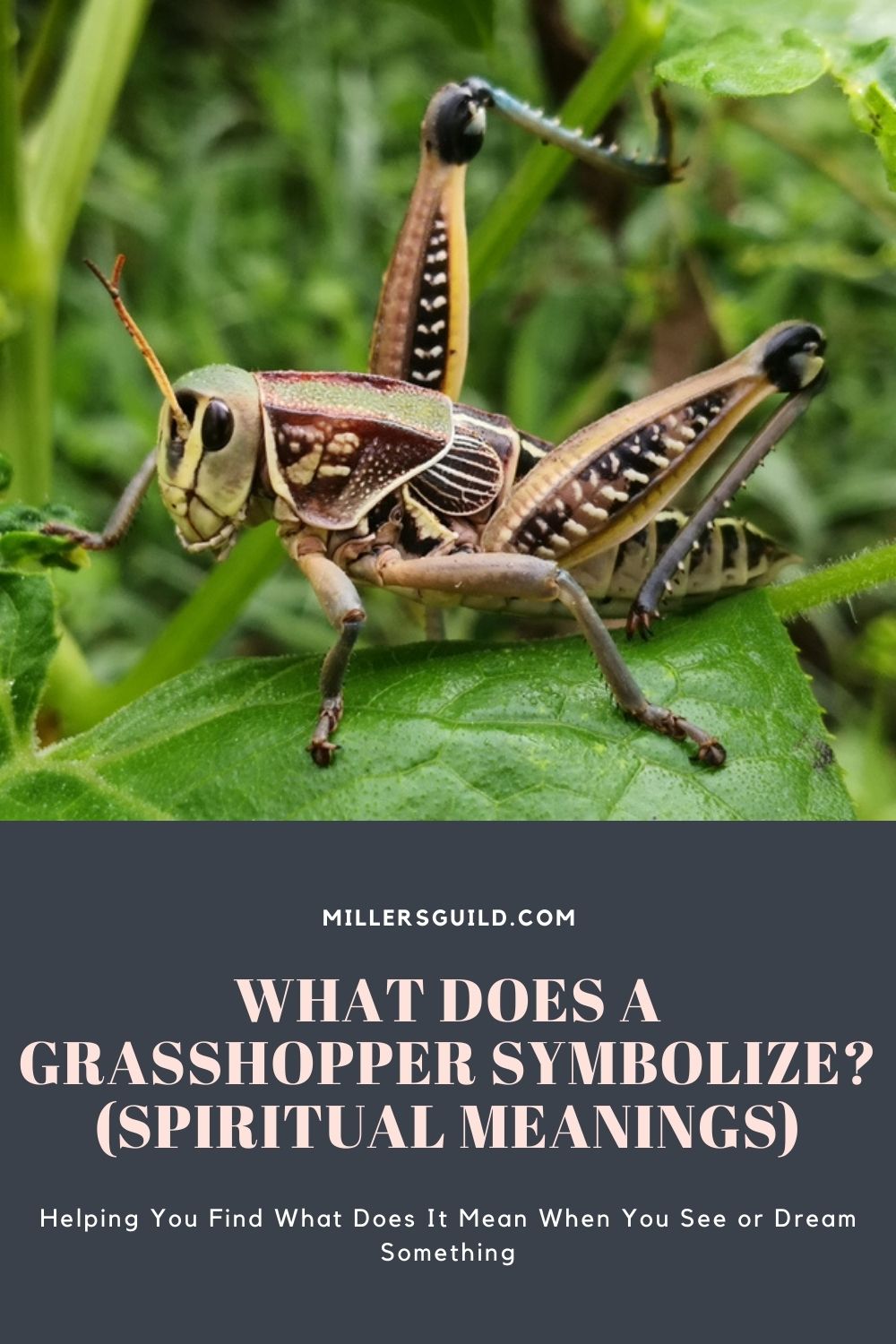 what does a grasshopper symbolize?

Grasshoppers have been around on the planet a great deal longer than humans. They date back to the Early Triassic period, a staggering 250 million years ago.

They’re distinctive for their long, strong hind legs, which enable them to jump long distances. And their chirping noise instantly conjures up warm summer’s evenings. That noise isn’t a call, though. It’s made when they rub their legs against the edges of their wings.

The relationship between grasshoppers and people hasn’t always been easy. In some parts of the world, they’re seen as pests. And in others, they’re considered food!

Nevertheless, they have their own symbolism in cultures around the world. Let’s take a closer look.

Grasshoppers were considered symbols of abundance and fertility in ancient China. They were linked to harvest time, when they appeared in the fields. The more food was available for them, the greater the number of grasshoppers. So seeing lots of grasshoppers became associated with a good harvest.

And seeing a grasshopper was thought to be auspicious, particularly if you hoped to have a son.

During the time of the Tang dynasty, grasshoppers were considered excellent pets. In modern China, however, they’re more likely to be found as a snack on a street stall.

Grasshoppers have positive symbolism in Feng Shui, where they’re associated with protection and immortality. And the insects are linked more generally to long life, health and wellbeing, and good luck.

The Japanese also associate grasshoppers with good fortune. This is despite the ability of their close cousins, locusts, to devour entire crops.

It may be the locusts’ voracious appetites that are to blame for both grasshoppers and locusts being eaten in Japan. If a swarm had decimated the harvest, there would be nothing left for the people to eat except the insects themselves.

Nevertheless, Japanese grasshoppers generally have a positive image in their homeland. You can frequently find them depicted in Japanese art, both ancient and modern.

Greek myths and legends are full of animals, so it’s perhaps not surprising to find the grasshopper amongst them.

Legend has it that the goddess of the dawn, Eos, fell in love with a mortal man named Tithonus. The loved-up couple petitioned Zeus to make Tithonus immortal, so they could stay together forever.

Zeus, being a literal sort of god, granted their wish. But what he didn’t do was prevent Tithonus from ageing. Eventually, the ancient Tithonus grew small and shriveled. When he turned into a grasshopper, his chirping was the final straw for Eos, who turned him out. Who says love is blind?!

The grasshopper was also the ancient symbol for the city of Athens. Its citizens sometimes wore gold jewelry in the form of grasshoppers as a sign of their allegiance and civic pride. The jewelry also doubled as a sign of status, and in this way grasshoppers became linked with nobility.

The way grasshoppers were viewed by the different Native American peoples tended to vary according to the lifestyle of the tribe.

For those who practiced agriculture, grasshoppers could be a nuisance. Depending on the species, they could damage crops by chewing on the leaves. As a result, they were generally viewed with suspicion or hostility.

For those tribes, grasshoppers became associated with negative characteristics such as greed, unworthiness and carelessness. And the Hopi people used them as a warning for naughty children. Disobey your elders, went the saying, and the grasshopper will come and bite your nose!

But for tribes that were hunter-gatherers, the grasshopper had more positive associations.
Some believed that the insect could predict the weather. And some thought that their powers extended to controlling the weather.

Grasshoppers appear in the myths and legends of many tribes. One Pomo legend portrays the grasshoppers as pests devouring crops. But it goes on to explain how even pests have a purpose in the cycle of life.

Another portrays the grasshopper as a magician who grew the first tobacco. It contains the dubious moral that tobacco won’t do you any harm as long as you share it!

Grasshoppers in the Bible

Grasshoppers appear in the Bible on five different occasions.

In the Book of Numbers, spies sent by Moses to the land of Canaan refer to themselves as being like grasshoppers compared to their enemies. The description is intended to convey how big and strong the Canaanites were. Grasshoppers, in contrast, are small and weak.

They also appear in Ecclesiastes, in a commentary on the challenges of old age. The grasshopper here is again invoked as something small and light. The passage states that to an elderly person, even a grasshopper landing on them can be a burden.

And in the Book of Isiah, God is described sitting above the earth, on which its inhabitants appear like grasshoppers. Again, the insect is used to convey smallness and insignificance.

The Modern Symbolism of Grasshoppers 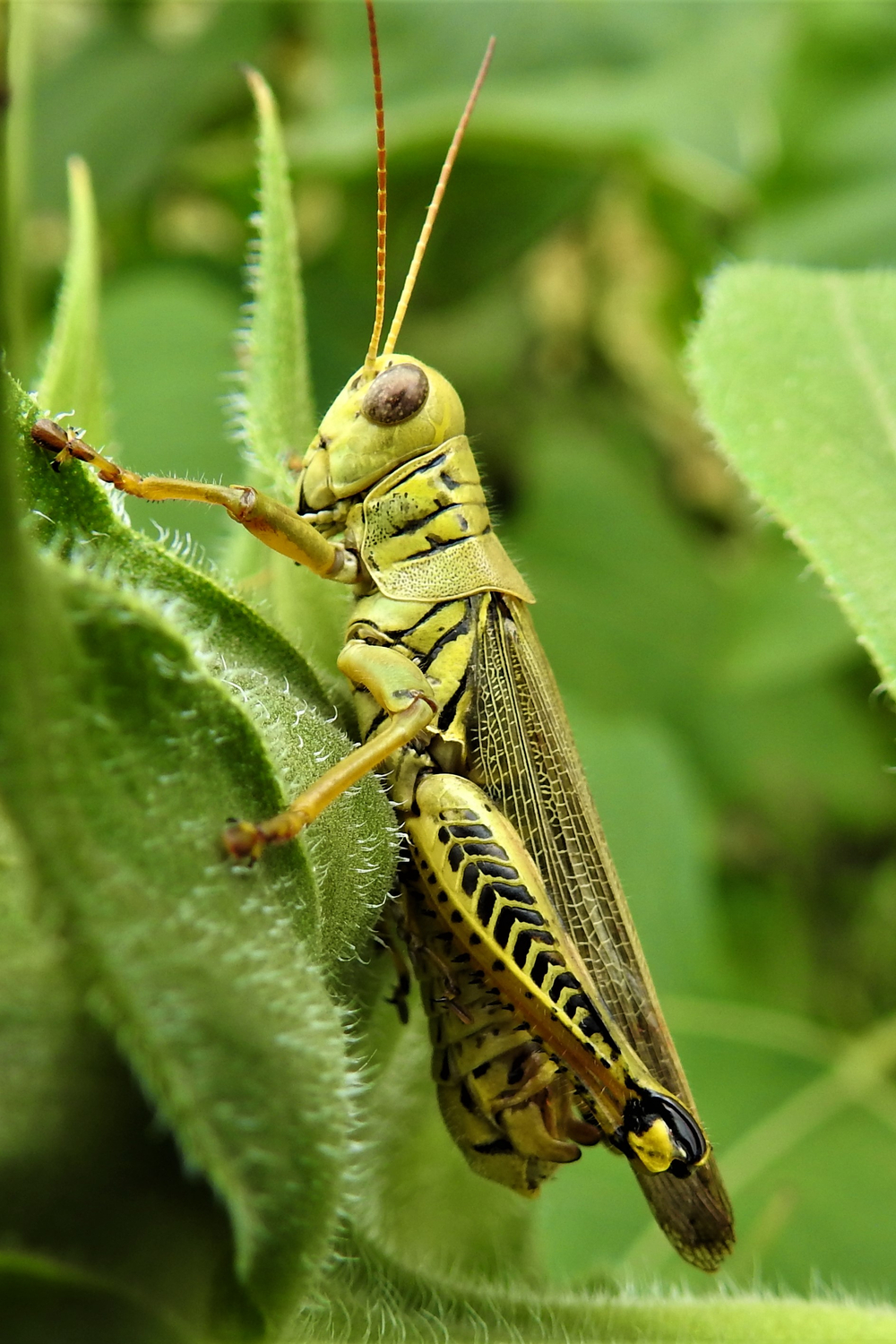 As we’ve seen, different cultures have ascribed very different meanings to the grasshopper across time. When interpreting the meaning of your own grasshopper encounter, the most important thing is what it represents to you.

That might be very different to some of the ancient connections we’ve looked at.

These days, for example, grasshoppers may not be the first creature that spring to mind as a symbol of smallness. Imagine reading a book where someone is looking down from a great height. “The people below looked like …” Ants, right?! And definitely not grasshoppers!

But grasshoppers still have the same distinctive characteristics they’ve always had. And it’s these that are often most helpful when considering their symbolism today. Let’s take a look at them now.

The very name “grasshopper” conjures up the amazing lengths which this little critter can cover in a single bound. For that reason, they can represent dramatic progress. And they can also be associated with change, particularly a change of scene.

Seeing a grasshopper can therefore be a hopeful sign, particularly if you’ve been feeling in a rut.

It might also suggest that the power to create change lies within you. The grasshopper leaps from place to place under its own steam. In the same way, your inner strength may be all you need to solve a problem or address a challenge.

The grasshopper may also be encouraging you to make your own “leap”. Perhaps you’ve been contemplating beginning a new endeavor, but are worried about the results.

The grasshopper may be prompting you to take a leap of faith. Have confidence in your abilities. And even if it doesn’t work out, you’ll have taken the opportunity to learn and grow.

Grasshoppers are also incredibly agile insects. They can move in any direction with perfect balance and poise.

That means they can also be a potent symbol for mental and emotional resilience. The appearance of a grasshopper could be a reminder of your own ability to respond to changing circumstances. No matter what happens, you have the strength to retain your emotional balance.

Grasshoppers not only leap long distances – they’re also very speedy. That means they can be connected to fast moving situations.

They can sometimes also be associated with events that feel like they’re moving too fast. Or perhaps you yourself feel that you’re zipping around with no time to pause and reflect.

If that chimes with you, the grasshopper may be encouraging you to seek balance. Your energy and vigor is often just what’s needed to get things done. But you also need to give yourself a chance to rest and recharge your batteries.

And giving yourself time for reflection can also allow you to learn from your experiences. In that way, the message of the grasshopper is to nurture your spiritual development.

Grasshoppers are well known for chirping. The sound they make can be very sweet. But unlike most creatures, they don’t use their vocal cords to make it.

As we’ve seen, the grasshopper’s chirp is a result of the insect rubbing its legs against its wings. But the sound isn’t just a by-product of an insect with a twitchy leg! It’s made for specific purposes.

Grasshoppers chirp for just the same reasons as birds sing – to find a mate and to defend their territory.

For some people, this chirping is the most distinctive aspect of the grasshopper. And if that’s the case for you, the message could relate to communication.

The grasshopper could be reminding you of the importance of articulating how you feel. Or it could be a prompt to listen to those around you.

Finding the Meaning in Your Grasshopper Encounter

Have you experienced an encounter with a grasshopper that felt significant? If you’re wondering how to interpret the message, a good place to start is with your own feelings.

What was it that made you think the grasshopper’s appearance was important? Identifying that can put you on the path to understanding its message.

Think about where and when you saw the grasshopper. And try to remember the feelings you experienced at the time.

If you came across the grasshopper somewhere unexpected, the location could be significant.

Or perhaps it was the timing of the grasshopper’s appearance that stood out to you.

Were you pondering a question that’s been bothering you? The grasshopper could have a message that will help you find the answer.

Maybe the grasshopper appeared on the anniversary of an important event, like a birth or a death. The grasshopper’s symbolism may relate to that event, or to the person you associate with it.

The emotions you experienced when you saw the grasshopper will be important too. Did you feel uplifted, joyful or energized? Or perhaps it made you pause, even feel a little uncomfortable.

Those feelings reflect your intuitive response to the grasshopper. And they will link to the meaning your psychic self immediately understands, even if you haven’t yet consciously uncovered it.

The Grasshopper as a Dream Symbol

Just as with spiritual encounters with grasshoppers in our waking lives, so the interpretation of dreams is intensely personal. So if you’ve dreamed of a grasshopper, start by asking yourself what the insect could represent to you.

One way to do this is to write down the words that spring to mind when you think of grasshoppers. Do that as quickly as you can – the aim is to find the meanings that are most obvious to you.

Then read back what you’ve written. You may be surprised to find that it also describes something else. That might be a person, a relationship, or something else in your life. Your unconscious brain has chosen the grasshopper to act as a symbol for that thing.

If you’re having difficulty with this approach, think through the more general symbolism of grasshoppers. Remember, they can symbolize progress, change, agility, speed and communication. Do any of these meanings throw light on the other aspects of your dream?

If they do, concentrate on how the other elements might fit together. You’re now on your way to a successful interpretation!

We hope you’ve enjoyed our guide to grasshopper symbolism. Whether you’ve seen a grasshopper in real life or in a dream, they can hold a range of meanings. And they can be symbols of both good and bad luck.

Meditate on your own experience to unlock the right interpretation. Remember – this might or might not be the same as the meanings other people ascribe to grasshoppers. Your personal associations are always the best guide.

Good luck in finding the meaning behind your grasshopper encounter! 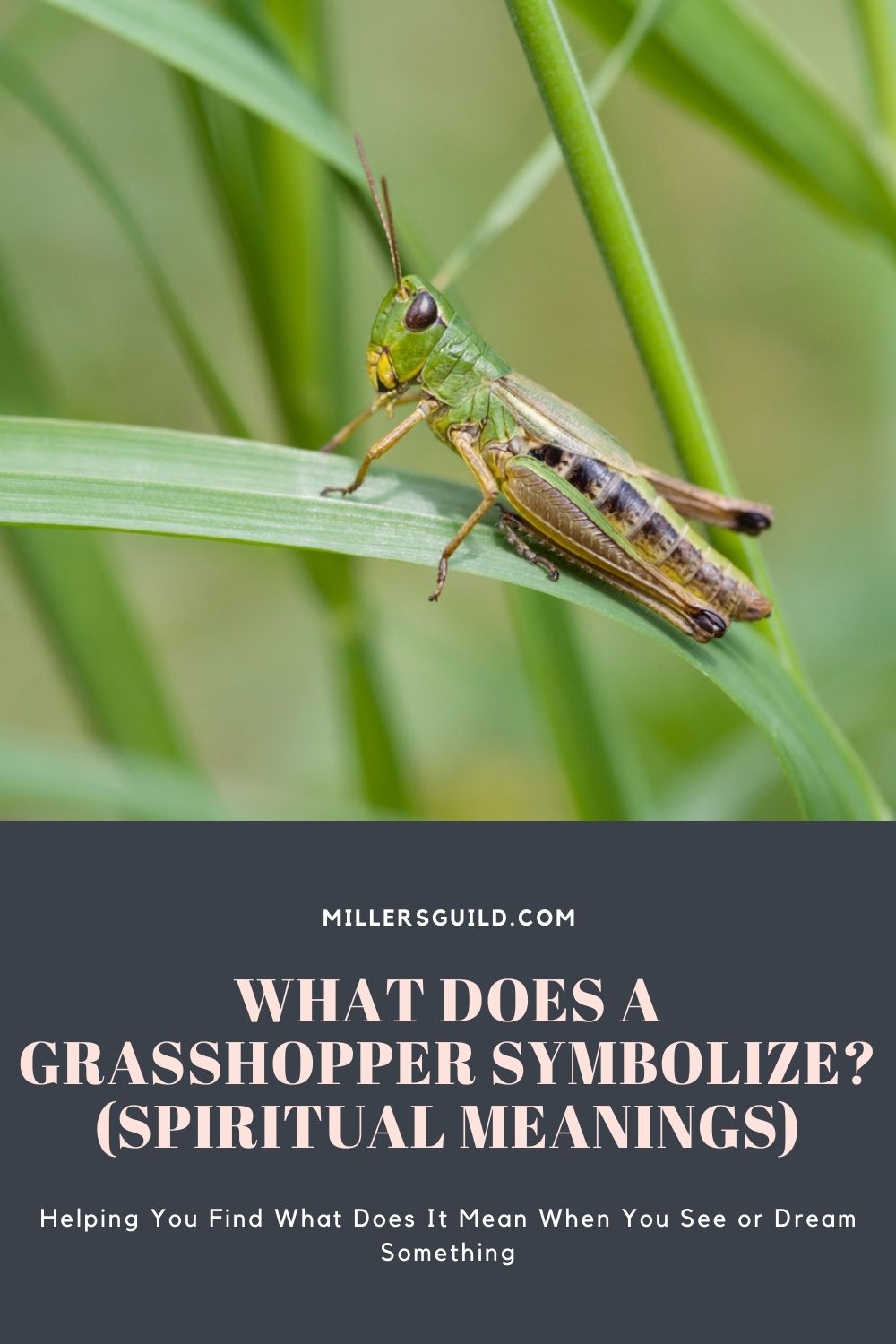