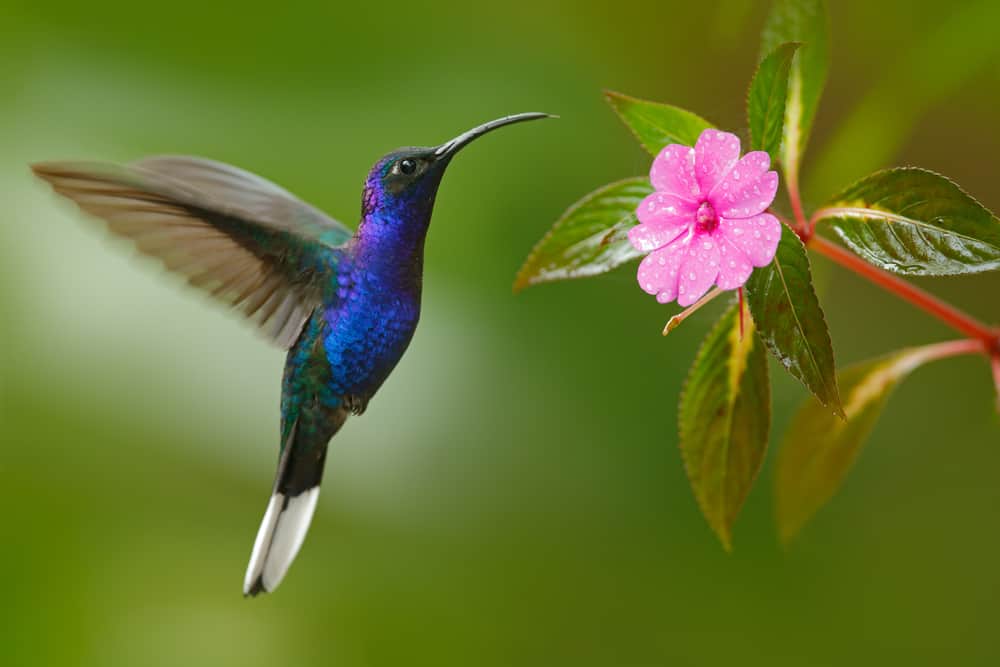 Even for those who are not spiritually inclined, seeing a hummingbird is a magical experience, so it’s no wonder that many cultures have attached a deep symbolism and meaning to these beautiful yet fragile creatures.

In this post, we will look at hummingbird symbolism and discuss what they have meant to the various peoples of North and South America as well as talking about how to interpret the message if you are lucky enough to see one of these elegant and graceful birds. 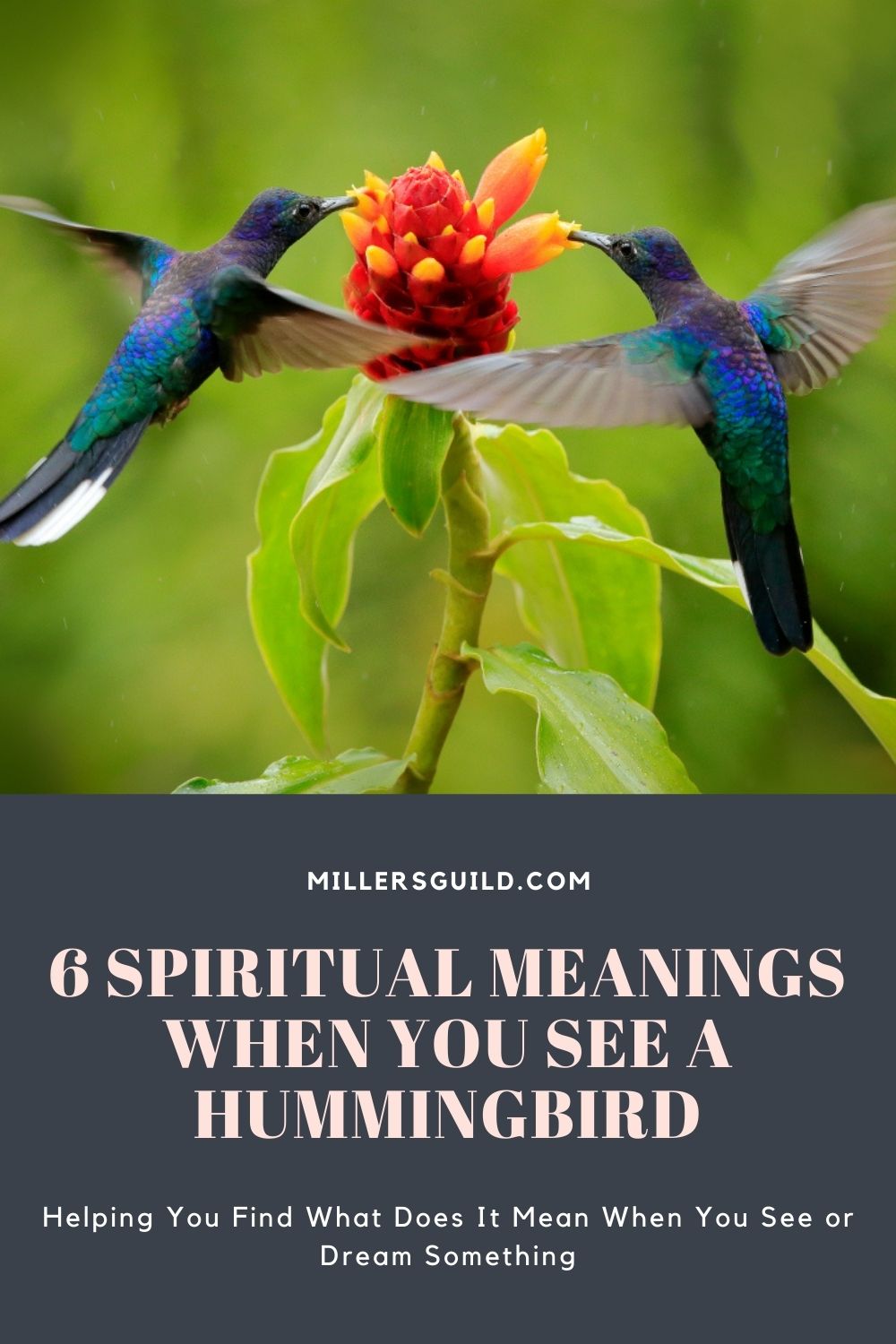 Hummingbirds are native to the Americas and live everywhere from the northern part of North America to the southern tip of South America, but most species are found in the tropics.

It is thought that their ancestors from millions of years ago originated in Eurasia, but nowadays they are found only in the Americas.

There are many species of hummingbirds, but all are small. The largest weighs not much more than half an ounce while the smallest weighs only a tiny fraction of an ounce.

The most remarkable feature they have is their ability to hover as they drink nectar from flowers. This, coupled with their diminutive stature and their vibrant colors makes them seem almost magical to our eyes.

A joyful animal to watch

They are a wonder to behold, and many people will be captivated watching them flit between flowers as they search for the sweetest nectar.

For this reason, they are associated with happiness and feelings of joy, and people also associate them with notions of freedom and a carefree lifestyle.

Another interesting characteristic of these birds is that, unlike many other species, they don’t mate for life. Instead, they produce offspring with several individuals during their lifetimes. This has led people to associate them with, if not promiscuity, then at least flirtatiousness.

Finally, hummingbirds only live a few short years, so they need to pack everything into their reduced lifetimes. They epitomize the expression “live fast, die young”, and for some, they are associated with living for the moment and seizing every opportunity.

Now let’s look at what hummingbirds have symbolized to various cultures in various parts of the Americas where people have traditionally lived side by side with them for thousands of years. 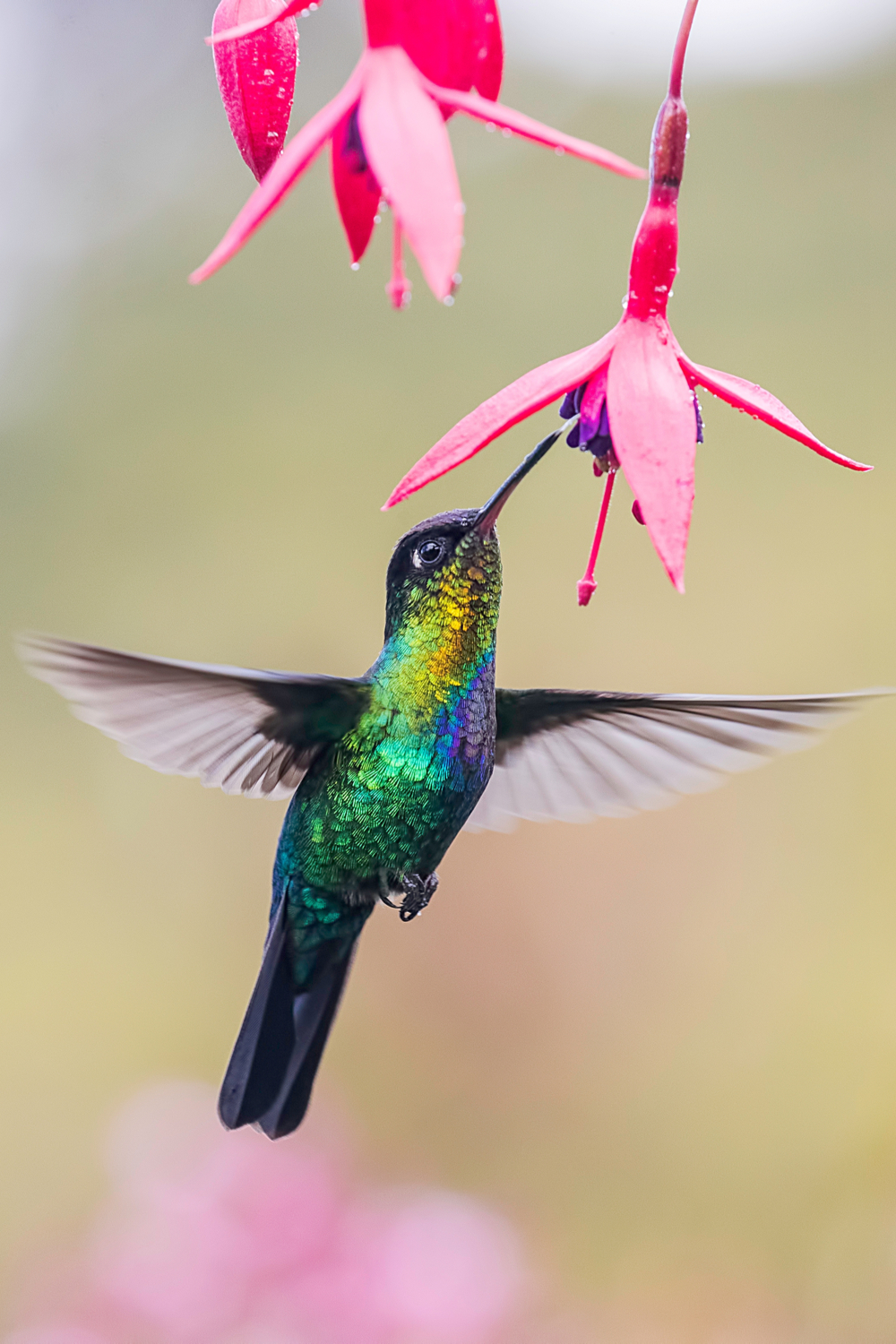 As with most animals, the symbolism of hummingbirds among North American tribes varies greatly, but they are universally seen in a positive light.

Often, they are seen as representing a helpful spirit, a spirit guide or a messenger from the other side.

According to some traditions, they are also a symbol of healing or a sign of good fortune to come – while in others, hummingbirds are associated with revealing the secrets of fire to mankind.

Hummingbirds also feature in the mythology of many tribes, and here are a few examples:

To the Hopi and Zuni tribes, the hummingbird symbolizes the fertility of the land, and here’s the story that explains why.

Once there was a family that lived in an area where the soil was so poor that it was impossible to grow anything, so in the end, the mother and father were forced to go off in search of new land, and they had to leave their two children behind.

Because they were bored and lonely, the children carved a hummingbird from wood, and after they finished, it came alive and played with them.

The hummingbird saw they were hungry, so it tried to bring them food every day, but because it was so small, it couldn’t bring enough to keep them alive.

Instead, it flew to the center of the Earth to ask the god there to make the land fertile again, and the god, being so impressed by the tiny but brave little bird, granted the hummingbird’s wish.

An Apache story tells of a warrior named Wind Dancer who was born deaf but who had the ability to sing the most beautiful wordless songs. Everyone was enchanted by his songs, and they were so beautiful that they even brought rain and good weather to his village.

One day, Wind Dancer came across a girl named Bright Rain who was being attacked by a wolf. He saved her, and later, they fell in love.

However, after this, Wind Dancer was killed in battle, and Bright Rain’s heart was broken. As a result of her sorrow, even the favorable weather departed, and the village suffered.

Seeing how sad she was, Wind Dancer returned to her in the form of a hummingbird. When he sang his old wordless song, Bright Rain was comforted, and finally, the good weather returned.

According to a Mojave creation myth, in the distant past, people all lived underground until the hummingbird came to them and led them out into the light.

The Pueblo people believed that the caterpillar was the guardian of the tobacco plant, but that the hummingbird was responsible for bringing the smoke to the shamans for Earth purification rituals. The hummingbird then carried gifts from the Earth god back to the shamans.

The Pueblo also have another story that tells about how the sun won a bet with a demon, which caused the demon to go blind. In his fury, the demon spewed out lava, setting fire to the whole world.

However, the hummingbird flew around and around, bringing in the rain clouds to put out the fire and save everyone.

After this, a rainbow appeared, and the hummingbird flew straight through it. At the time, the hummingbird was just a drab, brown bird, but because he had saved everyone, the rainbow blessed him with colors, which is why hummingbirds now have such vibrant feathers.

The Cherokee also associate the hummingbird with tobacco. According to their story, an old lady was sick and dying, but the hummingbird was able to save her by bringing her a tobacco plant that he retrieved from an evil goose name Dagul’ku.

Hummingbirds are common in Central and South American regions, so it’s no wonder they appear in various mythologies.

The hummingbird is closely associated with the Aztec god Huitzilopochtli, the god of the sun, war and human sacrifice. The god’s name can be translated as “hummingbird wizard”, and he often appears as a being with the features of both a man and a hummingbird.

In Aztec culture, hummingbirds were considered sacred, and only priests and rulers were allowed to wear their feathers.

According to Mayan beliefs, hummingbirds were made by the creator from leftover pieces after he finished making all the other birds – but he was so pleased with the attractive little creature that he made it a mate.

The two hummingbirds then married, the first marriage ever to take place, and all the other birds gave them feathers as wedding gifts, which is why they are now so brightly colored.

In another story, the sun disguised itself as a hummingbird when it was trying to seduce the moon.

The Inca thought the hummingbird was a messenger that traveled between the spirit world and the world of men.

The hummingbird also appears in the stories and beliefs of various Caribbean peoples. Here are a couple of examples:

The Chaima believed that hummingbirds were dead ancestors coming back to visit. For this reason, it was considered taboo to kill a hummingbird.

The Taino believed the hummingbird was created as a fly but was later changed into a tiny bird by the sun god Agueybaba.

The hummingbird represented fertility, and the Taino also appreciated the hummingbird’s spirit, courage and agility, so they called their soldiers “hummingbird warriors”.

What does it mean if you see a hummingbird? 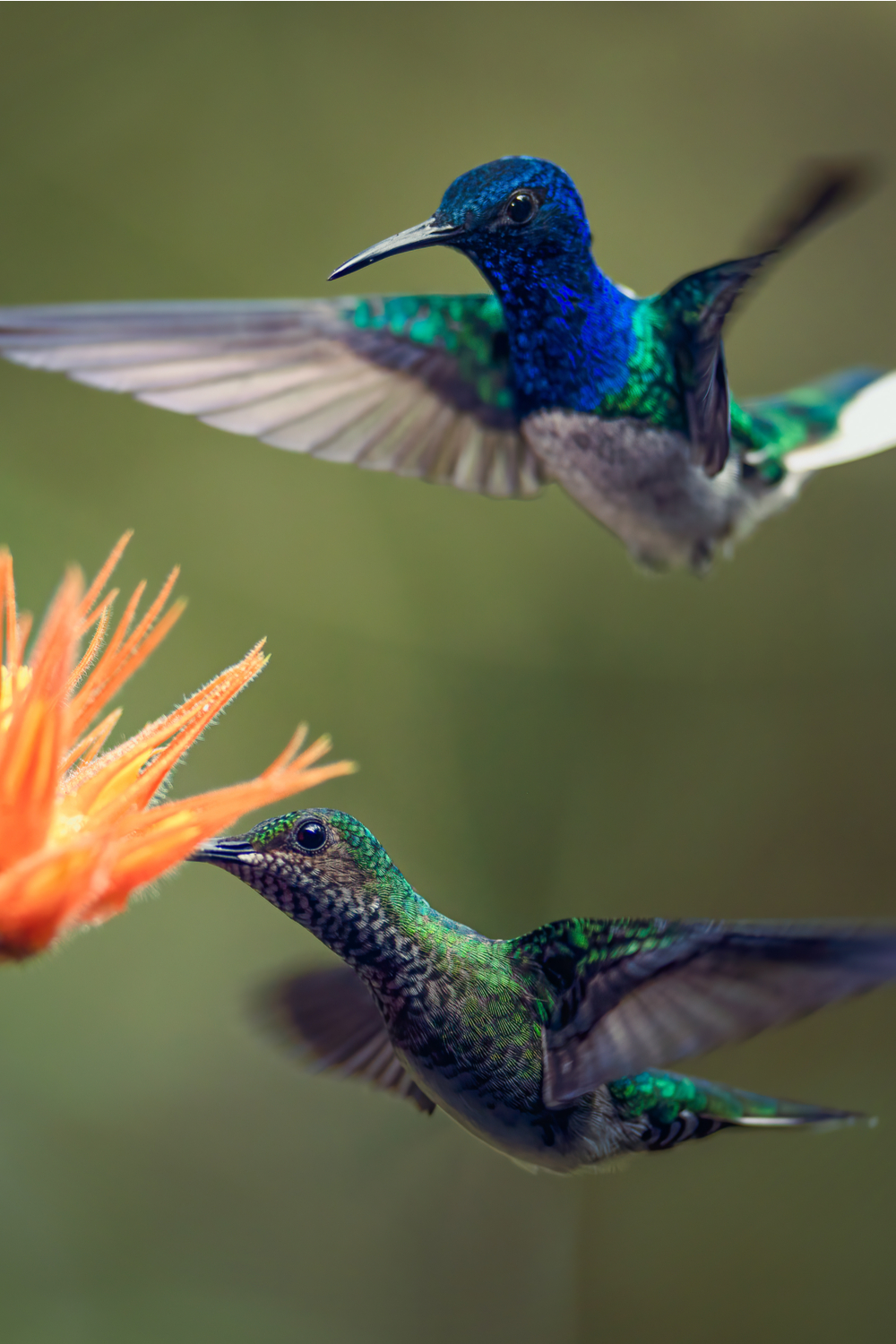 Hummingbirds have a rich and varied symbolism for the people who live wherever they are found, and if you see a hummingbird, it can have a range of meanings.

To understand the meaning a hummingbird has to you and the message it brings, think about the situation when you saw the hummingbird as well as any issues or challenges you are going through in your life.

Then, through deep thought, reflection and meditation, the true meaning of what you saw will be revealed to you.

Here are some of the common meanings that seeing a hummingbird can have:

1. Good news or good luck in the future

Hummingbirds are almost universally considered a positive sign, so seeing one could tell you that good news or good fortune is on its way to you soon.

These pretty little birds are a joy to see, so you should allow them to bring joy to your heart.

2. Live life to the fullest and seize the moment

Although hummingbirds flit around with seemingly not a care in the world, their lives are short, and they must work fast to make the most of the time they have in this world.

For this reason, hummingbirds can carry the message that you should do the same. Seize the moment and make every second count. Find joy in everything you do and don’t waste time thinking negative thoughts or being held back by negative energies.

Think about how this may relate to your life at the moment. Are you being too passive? Are you letting time pass by without making the most of it? Are you allowing negativity to spoil your motivation or enjoyment of life?

If you take the time to consider if any of this is true, the hummingbird may reveal that it is time to change to a more positive and proactive outlook to allow you to enjoy life to the fullest.

3. Now is not the time to start a serious relationship

Although seeing a hummingbird is probably not a sign that you should behave more promiscuously, if you are single, it may be a message that now is not the right time for you to start a serious, long-term relationship.

You may be better off waiting until the right moment arrives, so think carefully before becoming too involved with someone because you might regret it later.

4. Be ready to adapt to take advantage of a situation

As well as having to make every moment count, hummingbirds are highly adaptable animals, knowing how to make the best of any situation.

It’s better to act now rather than waiting for the perfect moment that never arrives, and the hummingbird may serve as a reminder for those who need to hear this message.

Although they are tiny, hummingbirds play a vital role in pollinating flowers, just like birds and insects.

This is why seeing a hummingbird may be a message telling you that even if you feel small or insignificant, you have your part to play – and that you may have a great effect on others.

6. Focus on the positive things in life

Above all, hummingbirds are reminders to us all to always look for the positives in life because we don’t have time to waste on negative things we can’t control.

Hummingbirds only live for a short while, but they still go about their daily work doing everything they can while they can.

In the grand scheme of things, a human lifetime is vanishingly short too, and hummingbirds remind us to search for the good around us, to enjoy our lives and to do what we can to bring joy and happiness to others.

A welcome message of joy and happiness

Seeing a hummingbird is always a positive sign, and it usually means that something good is going to happen. Alternatively, it can serve as a reminder that life is short and that we always need to make every moment count.

If you see a hummingbird, search within yourself and see how the message relates to you and your life at the moment – and then, by trusting your intuition, you will be able to find the correct interpretation of the message you are being given. 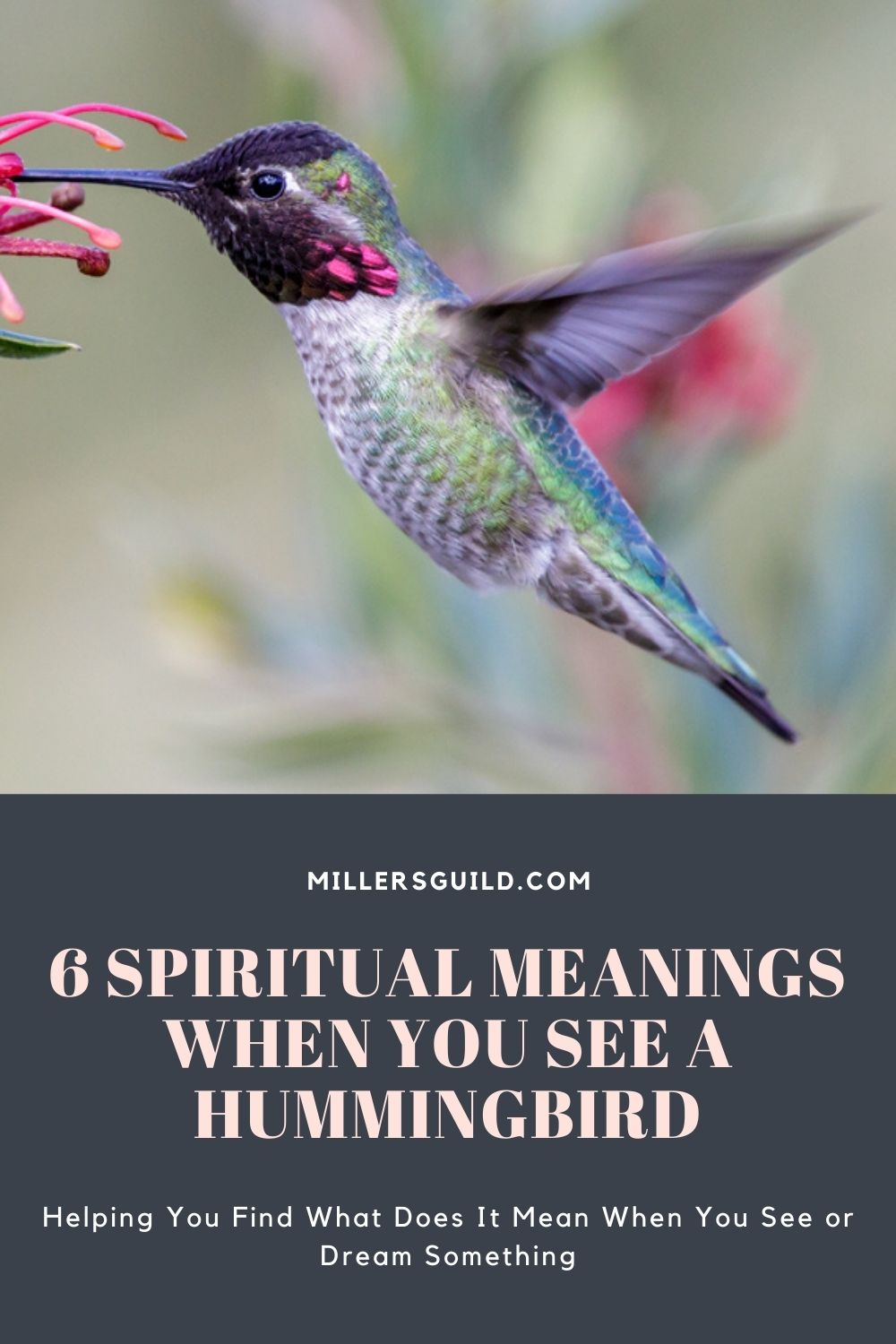 5 thoughts on “6 Spiritual Meanings When You See a Hummingbird”