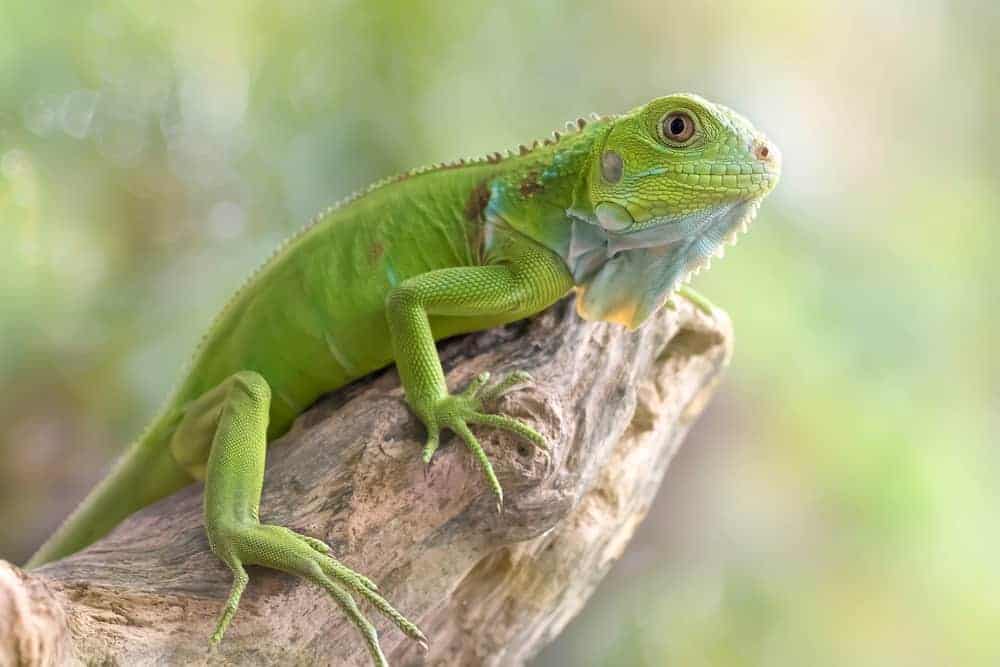 To many people, lizards are fascinating creatures. They can be extremely beautiful and graceful, but at the same time, they are so different from us, and we can never know quite what a lizard is thinking, which gives them a certain air of mystery.

Lizards are found the world over, so it is unsurprising that they have come to symbolize many things to the people they live around. And to help you understand more about what they mean, here we discuss lizard symbolism and what it means if you see one in life or in a dream. 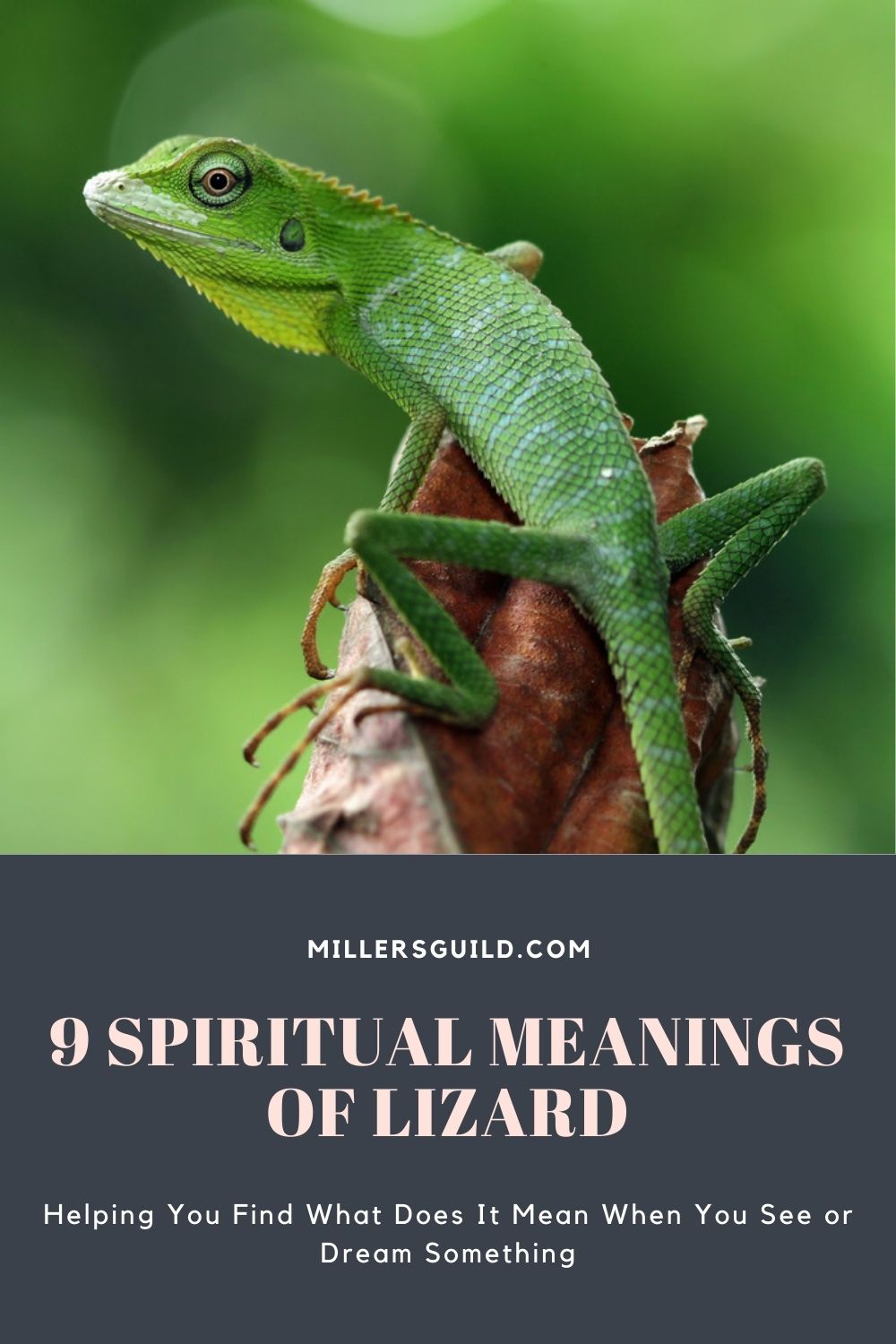 Before we talk about the symbolism lizards have in various cultures around the world, let’s think about their characteristics and what we think of when we see one.

Reptiles are cold-blooded, and their brains are not as developed as mammals’ brains.

We sometimes say the oldest, most primitive part of our brain is the “reptile” part, and it’s responsible for instinctive reactions. Our higher thought processes happen elsewhere in our brains.

For this reason, we see lizards as being cold, impassive and sometimes even cruel due to the way they devour their prey without even a flicker of emotion. They are inscrutable creatures that we can never understand.

Another characteristic of many lizards is that they can shed their tail to escape, which may represent sacrifice for the greater good.

In winter, some lizards can go into a torpor, awakening only when the weather warms. They also shed their skins, and these characteristics remind us of the cycle of death and rebirth.

Some people appreciate their capability to sit impassively for hours, waiting for their prey. This can represent patience, endurance and determination, attributes that many see as highly desirable.

Finally, they can live in extremely harsh environments like deserts, so they are also seen as tough survivors that can exist where nothing else can.

Lizard symbolism according to different cultures around the world 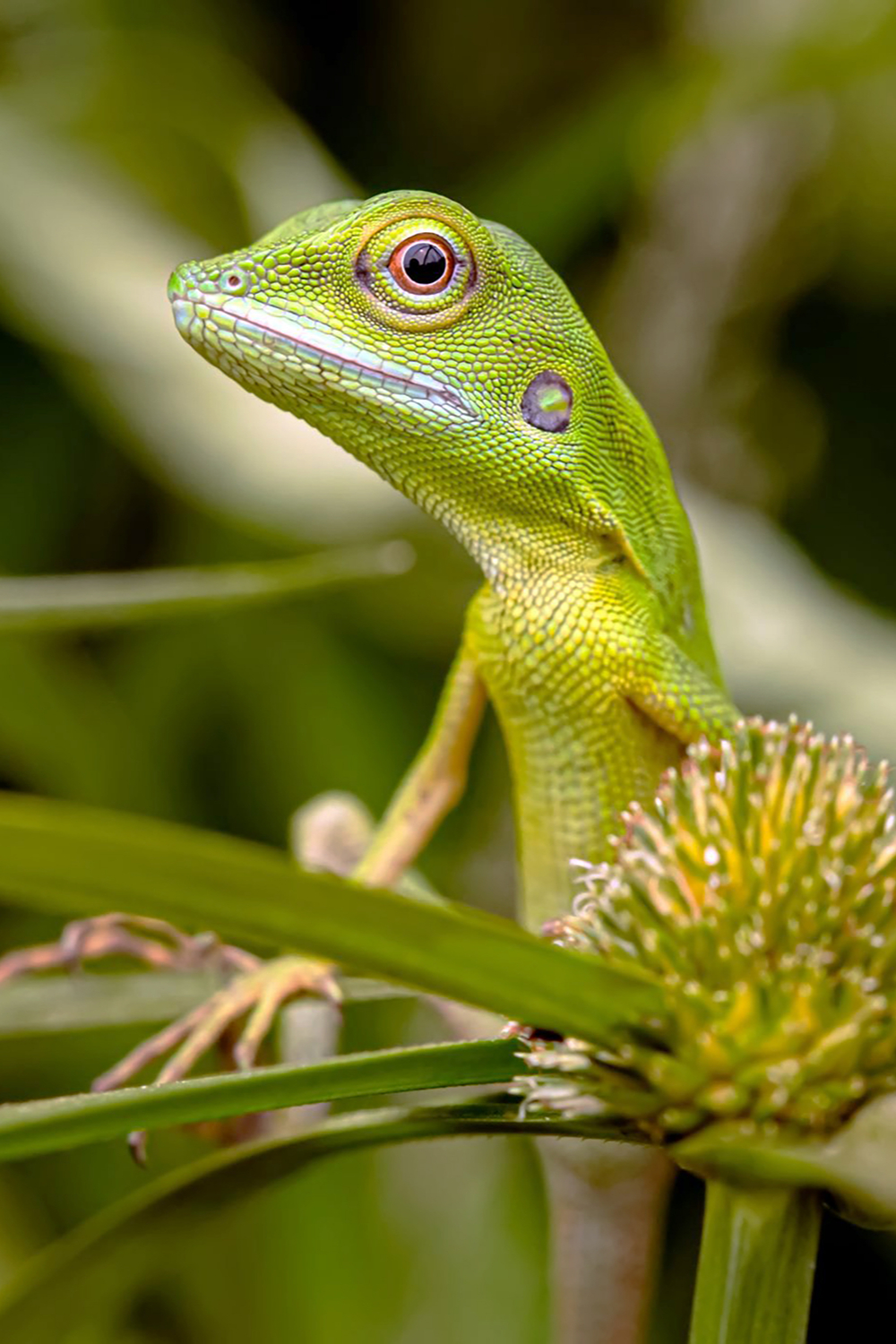 Lizards are found in many countries, so it’s no surprise that these curious creatures have come to symbolize different things according to different traditions. Here are some examples:

Lizards are present across much of North America, and different Native American tribes have a variety of beliefs about them.

Many tribes associate them with protection, and they can also symbolize good fortune, prosperity or the cycle of death and rebirth.

Other tribes have more specific beliefs about lizards. For example, the Hopi associate lizards with medicine and healing, and they used lizards in ceremonies.

The Pima also believed lizards had special powers of healing and used them in lizard medicine to cure chronic illnesses. In the healing ritual, songs were sung in praise of the lizard, and a lizard was placed on the body of the afflicted.

For the many Plains tribes, the characteristic they most revered in lizards was their ability to survive in harsh environments.

The symbolism of lizards and the mythology that grew up around them depended greatly on the regions the tribes inhabited and the types of lizard that lived there. For example, the fearsome Gila monster gave rise to the Navajo legend of the Gila monster hero.

Lizards featured in a creation myth of the Pomo, who believed a lizard god created humans partly in his image, and for the Cheyenne, it was considered bad luck to kill a lizard.

Lizards were important to the civilizations of Central America too. The Mayans believed that the Earth was created by a lizard god, and lizards were closely connected with the dream world. Lizards were also sacrificed and were thought to bring fertility and abundance.

The Aztec god of wind, the air and learning was represented by a giant feathered lizard or dragon, and the Mayans also believed in a similar deity.

In Japanese culture, the lithe, almost sensual shape of lizards meant they were associated with sexual activity and were seen as symbols of love. This also saw them being incorporated into love potions.

In China, the dragon is one of the most important symbols, being associated with the emperor and imperial power as well as being an auspicious motif – and lizards are closely related to dragons.

Another belief about lizards is that they could bring rain, and an ancient ritual involved placing lizards in wooden jars and beating the jars until the rains arrived.

In Hindu belief, a lizard falling on a person can tell the future – depending on where the lizard lands. For example, if it lands on your head, it means you need to prepare for a rebellion – whereas if it lands on your face, you should expect a guest.

Interpretations for lizards falling on various other parts of your body also exist.

Similar to in India, lizards falling are thought to foretell the future in Southeast Asia too. For example, if one falls on your bed, it means good fortune is on the way.

The Celts believed that the night goddess Evaki stole sleep from the lizard’s eyes and gave it to the other animals, and for this reason, lizards symbolized sleeplessness and insomnia.

They were also thought to be a common ingredient used by witches in potions.

Furthermore, as in many other cultures, lizards were thought to be related to dreaming, and another association was with bringing good fortune and wealth.

The Ancient Greeks believed lizards were signs of hopefulness and wisdom. The Romans, on the other hand, saw lizards as representing the cycle of death and rebirth.

The Greek god Hermes, or Mercury to the Romans, rode in a chariot that was pulled by lizards.

In much of Africa, lizards have positive connotations and are thought to bring good luck. However, several different cultures have their own specific beliefs about them.

A similar Zulu story tells of a lizard that was on its way to bring a message of eternal life, but when it stopped to eat, it was overtaken by another lizard who passed on a message of death.

When the sky god discovered what had happened, he created marriage and children, so that even if people couldn’t live forever, they would still be able to continue to exist in a way through their offspring.

In other traditions, lizards are seen in a more negative light. Some people believe that seeing a fire skink is a bad omen, and they will commonly change their plans if they encounter one.

Lizards were sacred to the Ancient Egyptians and have been recovered embalmed with mummies. The Egyptian lizard hieroglyph meant “plenty”, and lizards were also closely associated with the sun since their activity was linked to the sun’s movement in the sky.

What does it mean if you see a lizard in real life or in a dream? 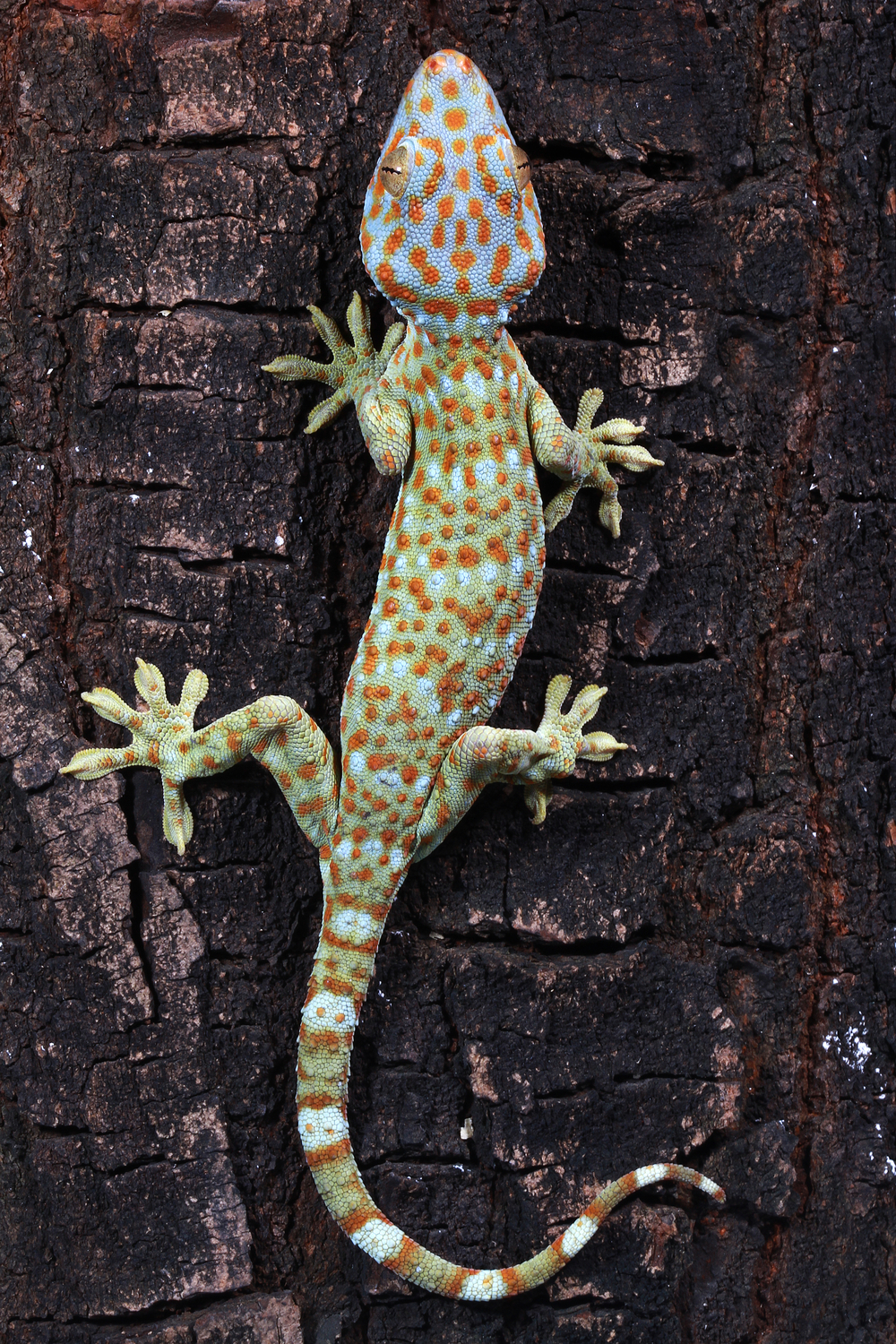 If you see a lizard in real life – or especially if you see one in a dream – it can have many different meanings.

To interpret the message, you need to think about the specific circumstances of what you saw. Then, but searching within yourself and using your intuition, you will be able to work out how what you saw relates to you and what the message means.

Here are some of the most common meanings of seeing a lizard.

Many people in Mediterranean countries believe that having a house gecko in your home brings good luck – so if you are lucky enough to have a house gecko or other type of lizard move in, it could foretell good fortune.

House geckos are usually welcome animals since they are harmless and can help keep mosquitoes under control. In some countries such as Turkey, it is considered bad luck to kill one.

2. Dreaming of a lizard

There are many possible interpretations of a lizard in your dream, but one of the most common is that it represents change. It could foretell change in your life, but it could also be telling you that, like a lizard changing its skin, you also need a change.

Is there something in your life that feels old and stale? Are you thinking about changing something important but are hesitant to do it?

In that case, the message could be telling you to be confident and make that change because now is the right time to do it.

Another possibility if the lizard doesn’t move is that the dream is telling you to be more patient. Is there something in your life you are rushing into? Then this dream may be telling you to take your time.

3. Dreaming of attacking a lizard

If you dream that you are attacking a lizard, the meaning is easier to understand because the lizard represents adversity, and the dream is about overcoming it.

Are you facing a particular challenge in your life at the moment? Then this dream tells you that you should have full confidence because you will win through in the end.

4. Dreaming of being attacked by a lizard

Dreaming of being attacked by a lizard, on the other hand, has a different meaning. This dream is a warning that someone is conspiring against you, so you should be on your guard and be careful about who you trust.

5. Dreaming of defeating a lizard

A dream of defeating a lizard represents you overcoming your instincts and your lower, animal self and using your emotion and intelligence instead.

This dream could be telling you that you should reflect and think deeply to solve a challenge or resolve a dispute.

6. Dreaming of a huge lizard

If you dream of a huge lizard, this represents an obstacle blocking your path, and you will need to find a way to overcome it. However, by identifying the obstacle, you will be able to find a way to get past it if you use your intelligence.

7. Dreaming of catching a lizard

However, if you try to catch a lizard and don’t succeed, it may mean the object of your affections will always remain beyond your reach.

This is a less welcome dream because it is one of unrequited love. However, it can be seen in a positive light since it is a message to stop wasting your time on someone who will never love you back.

8. Dreaming of eating a lizard

If you dream that you are eating a lizard, you are very lucky because this means a great opportunity is about to present itself to you. It means you need to be ready to grab it with both hands – or the opportunity may pass you by.

9. Dreaming of a lizard eating its prey

This dream is probably telling you that the more primitive part of your nature is gaining the upper hand and you are being ruled by your baser instincts.

If this is the case, you should use your heart and your intelligence more in your decisions as well as in your relationships with other people.

Mysterious animals that are hard to understand

Lizards have many qualities, some negative and some positive. They can be seen as cold and emotionless, or they can be seen as possessing extreme patience and being able to survive in the harshest of environments.

Lizards have profound symbolism in many cultures, and if you dream of one, it can have great significance. If you dream of a lizard, you should search inside yourself, and by using your intuition, you will be able to discover what the dream means to you. 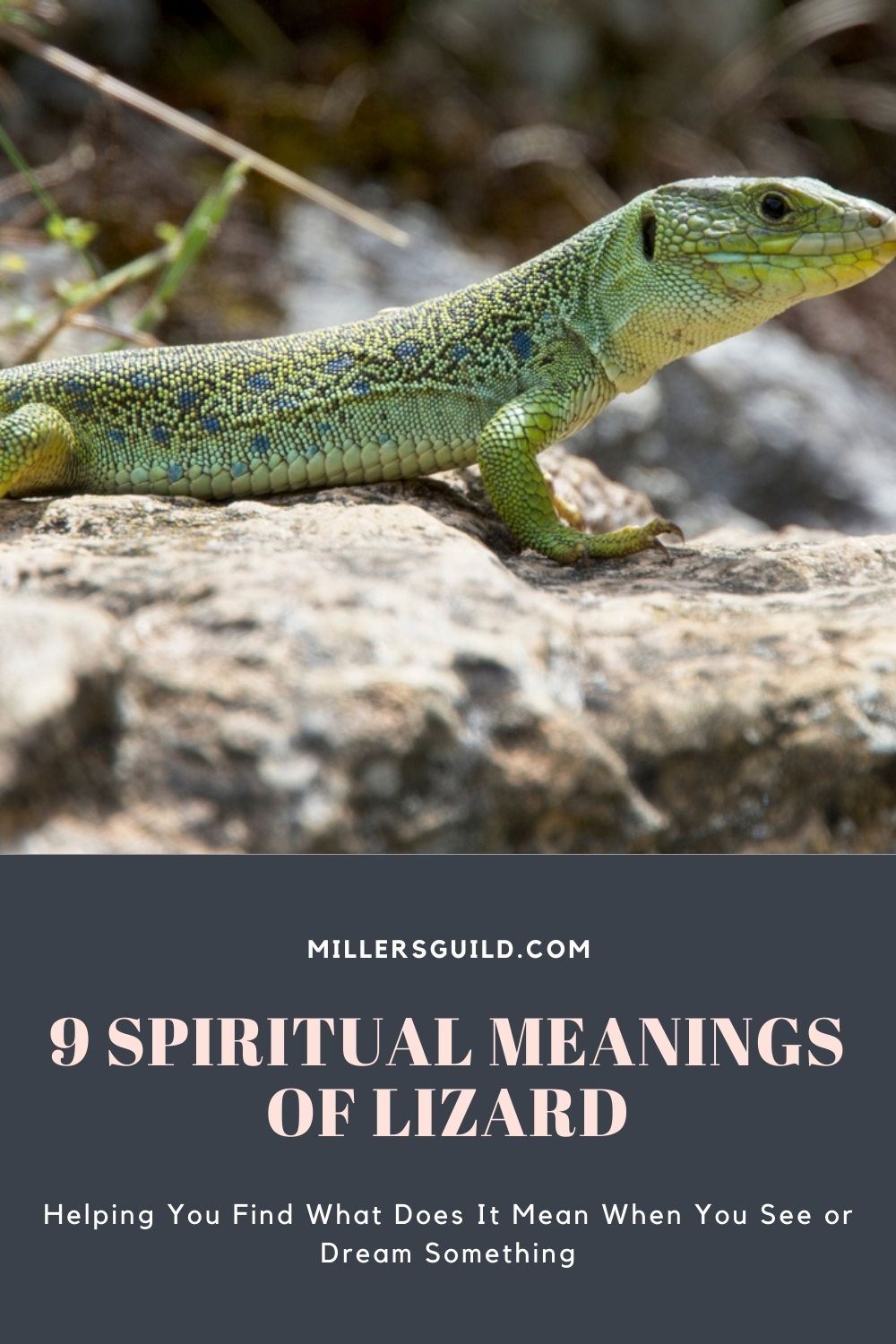