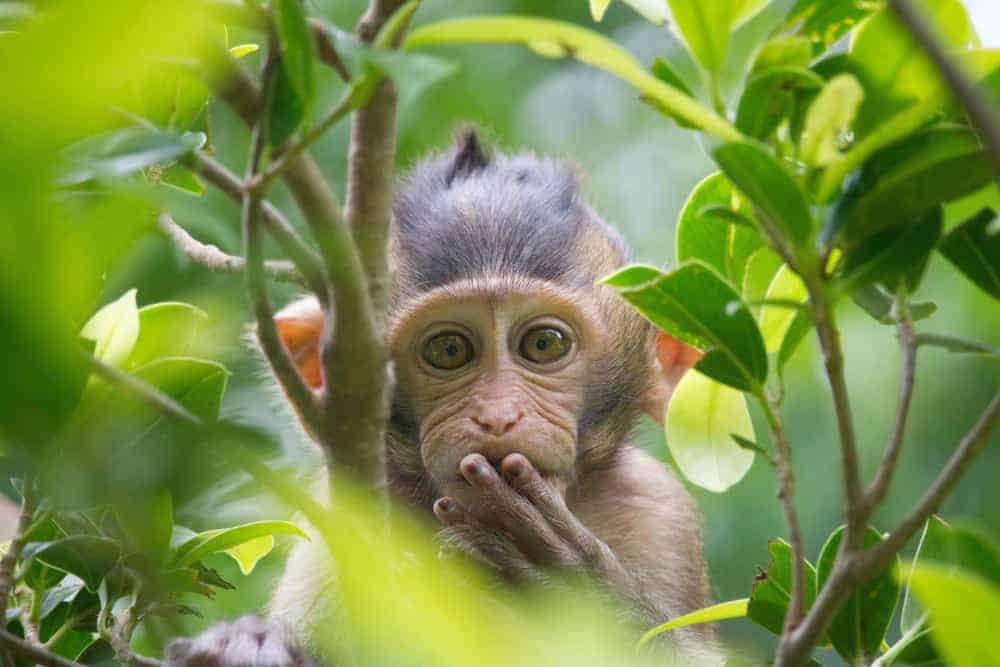 Are you lately dreaming of our simian friends? Or, you might have encountered one on your way to work recently? Either way, we’re sure you have plenty of questions regarding what monkeys symbolize spiritually, culturally, and religiously.

To your rescue, we’ve got all the answers! Read on to find out what monkeys symbolize, their spirit animal meaning, and when to summon them.

We love sharing as much information as possible with you. For your convenience, we’ve further included seven monkey dream plots and their meanings. Let’s begin! 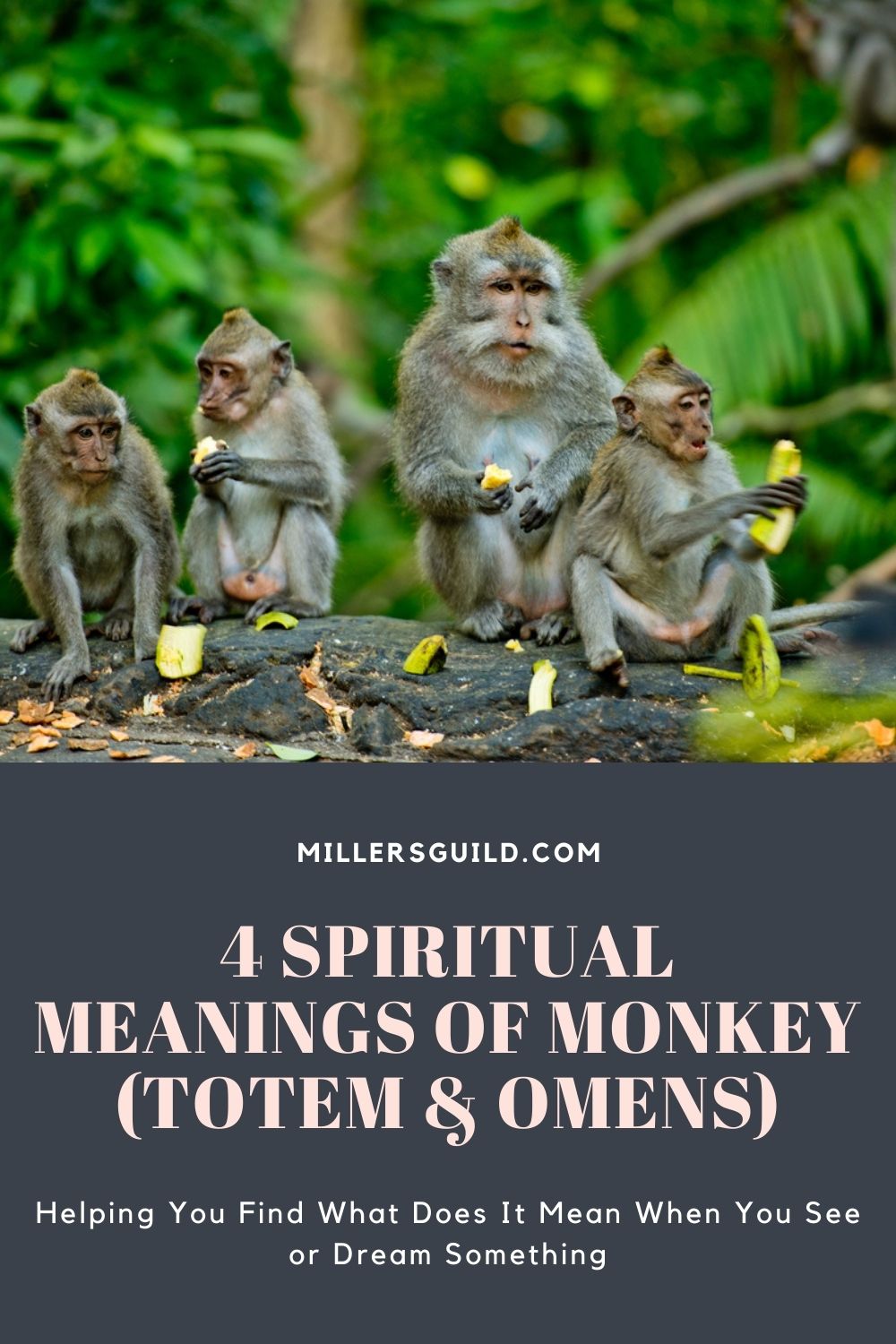 What Do Monkeys Symbolize?

Monkeys take their play-time seriously. ‘Monkeys’ is even an affectionate way of referring to children as playful and mischievous. Monkeys remind you to take care of your inner child and make time for fun in your life.

Monkeys prioritize their family and communities. They’re often spotted playing and caressing each other in big social circles.

Monkeys believe in giving and receiving help from each other while navigating life’s journey together and are affectionate and compassionate towards their fellow family and communal members.

Monkeys are also symbolized for their faithfulness. This symbolization is known chiefly among Hindus. This concept most likely has borne out of the famous Sanskrit book ‘Ramayana’ which features a mighty ape, Lord Hanuman, and his loyalty and devotion towards Lord Rama.

While those with monkey totem animals are full of light-headed silliness, at the same time, they’re smart and good problem-solvers.

Primates, including monkeys, are known to have high cognitive skills. They’re often witnessed of making tools and display impeccable hunting and food gathering skills. So, monkeys are rightfully symbolized for their wittiness, intelligence, and problem-solving skills.

While monkeys’ mentions in Bible remain rare, they are represented as malice, lust, greed, and even devils in Christian iconographies. The monkey depicted at the feet of the Virgin is interpreted in two theories.

The first is the speculation that her purity subdues the despicable repertoire of behavior the monkey displays, and the next theory talks about her dominion over all creatures.

In Hinduism, monkeys are revered for their playfulness and mightiness. In fact, in ‘Ramayana’ a Sanskrit epic that narrates ‘Rama’s Journey’, Lord Hanuman has been depicted to be Lord Rama’s greatest helper and devotee.

The monkey deity is venerated for wittiness, faithfulness, fierceness, and courage among Hindus.

In the Chinese zodiac, the night sign is associated with monkeys. It is believed that those born under this zodiac are as smart and clever as monkeys. There are also many mythologies relating to monkey kings. Overall, people in this region identify monkeys as tricksters and for their playful mischievousness. 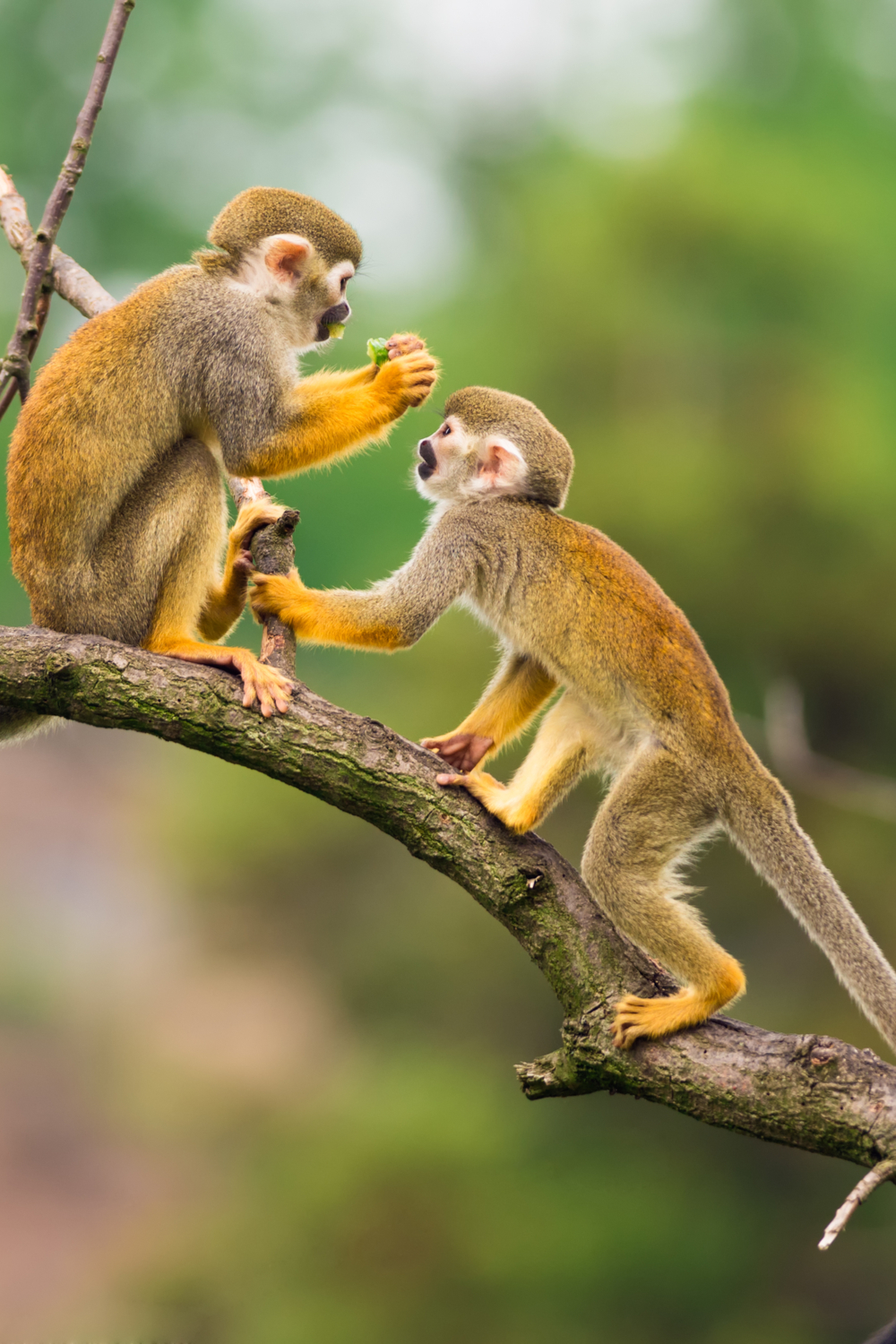 Monkeys are deep-rooted in South as well as Central American folklore. They are famous as intelligent creatures who outsmart other animals and humans with their infamous tricks and cunning strategies. Monkeys were also clan animals of many South American tribes.

Monkeys are also symbolized faithfulness and harmony. You might have heard about God Xochipilli, the God of music, love, and dance, and his loyal companion Ozomatli.

The eleventh day in the Aztec calendar was named after this faithful monkey and is believed to remind people to allow the bliss of art into our lives.

Furthermore, many legends about monkey people exist among people of Athna tribes, which talks about these human-like creatures being evil and enemies of humans.

Are you a social butterfly? Those with monkey spirit animals are the life of the party, and people adore and are amused by their never-ending social batteries. You’re affectionate and compassionate.

Monkey spirit animals guide you to be creative, smart, and inquisitive by nature. You spend most of your time in artistic and creative pursuits, seeking answers, learning, and honing new skills.

You also don’t refrain from passing silly, light-hearted jokes and comments whenever the opportunity arises. While you do so with a pure and innocent heart, it might be often hurt people’s emotions. So, those with monkey spirit animals should learn to draw a line between jokes and offense.

Likewise, though you’re great at problem-solving, you tend to avoid serious situations with the aid of jokes and tricks. You must understand that some situations demand maturity and responsibility from you, and you must abide by it no matter what.

When To Call On Your Monkey Spirit Animal?

If you feel stuck in life or you’d love some ‘me-time’, your monkey spirit animal would be your best help-mate. They will encourage you to have some lust for life. They will teach you to find happiness in minor achievements and ways to keep yourself entertained.

Not everything in life is meant to be taken seriously. And, if you’re in need of an urgent reminder of that, summon your monkey spirit animal.

When you encounter these small primates, the culture and religion you follow and your relationship with the monkey spirit animal also matter when determining what the encounter meant for you.

Seeing monkeys during the evening can be an indicator of success and good luck coming your way. Seeing a black monkey in a dream can be a sign for you to look at situations positively and work on being more confident and emotionally secure. 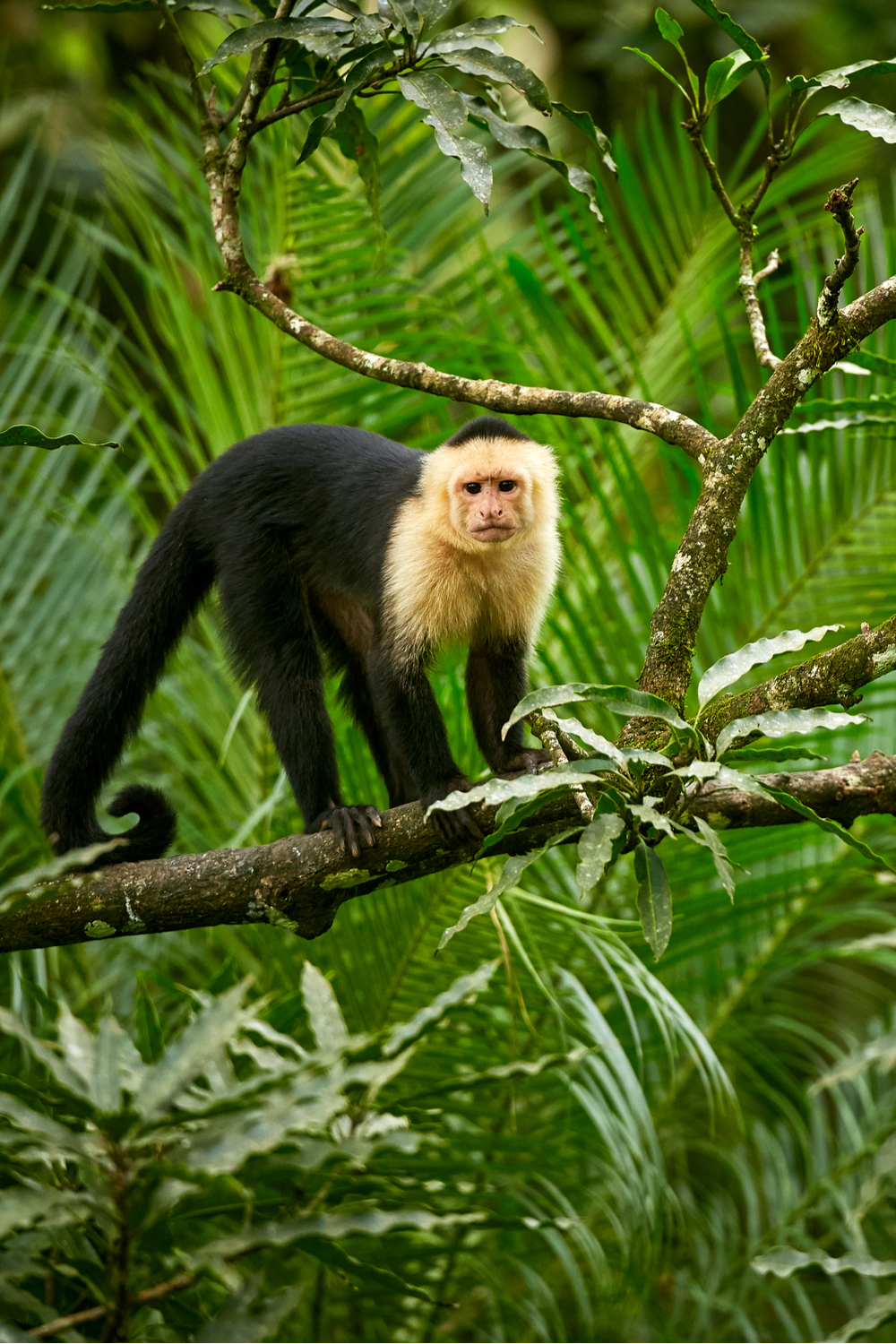 Finally, let’s discuss seven common monkey dream plots and what they mean in this section.

Dreams about feeding monkeys are good omens. Lately, you have had a positive outlook on life. You see good in people and are open to love and connections.

This dream is also a sign that you’re a generous person. People admire and acknowledge you for this trait. Furthermore, feeding monkeys on the dream also represent abundance and prosperity. You’re likely to be soon blessed with wealth and respect.

2.   Dreaming about being chased by monkeys:

If the monkey was following you quietly in the dream, it means that you need to figure out ways to learn from the person who keeps frustrating you otherwise. Believe us; they have plenty of knowledge to offer.

On the other hand, if monkeys are viciously chasing you, it means that you’ll soon be able to find out which friends you can entrust and who will run away at first sight of hardship.

3.   Dreaming about being chased or bit by monkeys:

Do you sometimes feel that you’re not being respected enough and taken seriously in personal as well as professional life? If yes, your frustration might have translated into a dream where monkeys chase each other or you.

Likewise, if the monkeys manage to bite you in the dream, it portends hostile days ahead in your waking life. You might be in someone’s bad book, and they’ll probably treat you with doubts and suspicion.

Is your love life on the rocks? You’re probably going through disputes with your better half. Nevertheless, it would be best if you remembered that it is not you vs. them but you two vs. the issue.

Letting ego, selfishness, and jealousy get between you two at the moment would be an absolutely foolish move.

Dreams about baby monkeys are urging you to be more nurturing towards your loved ones. Or, it can even signify a new addition to your family. You might be involved in a romantic relationship soon.

Baby monkeys, while looking cute and innocent, can destroy days worth of work in minutes. So, dreams about them can also be a warning that you’re overlooking certain issues in life. While they might not appear as that big of a deal, they might accumulate into huge problems if left unaddressed.

6.   Dreaming about playing with monkeys:

Playing with monkeys in dreams are harbingers of good news and prosperity. You might be blessed with great opportunities or promotions in your professional life. Or, you might get together with your long-lost friend. Overall, happier days are ahead.

Dreaming about a monkey in a cage is a sign that you’re being oppressed. You’re not able to fully express your creative side, and this fact is bothering you a lot. Maybe you’re required to work in your job under the supervision of somebody who intentionally suppresses your playfulness.

Such a scenario might require a clear conversation. Like in any other setting, you need to draw some boundaries in your professional work environment as well.

The conversation doesn’t have to be heated. Simply let them know that you’d work much more efficiently if provided with creative freedom.

We hope we were able to answer your queries regarding monkey symbolism and spirit animal via this post. In a nutshell, monkeys symbolize playfulness, trickery, community, loyalty, affection, and cunningness. They’re also symbolized as ignoble beings in some cultures and religions.

If you desire to discuss monkeys and their spiritual meanings further, we’d love to entertain you in the comments. 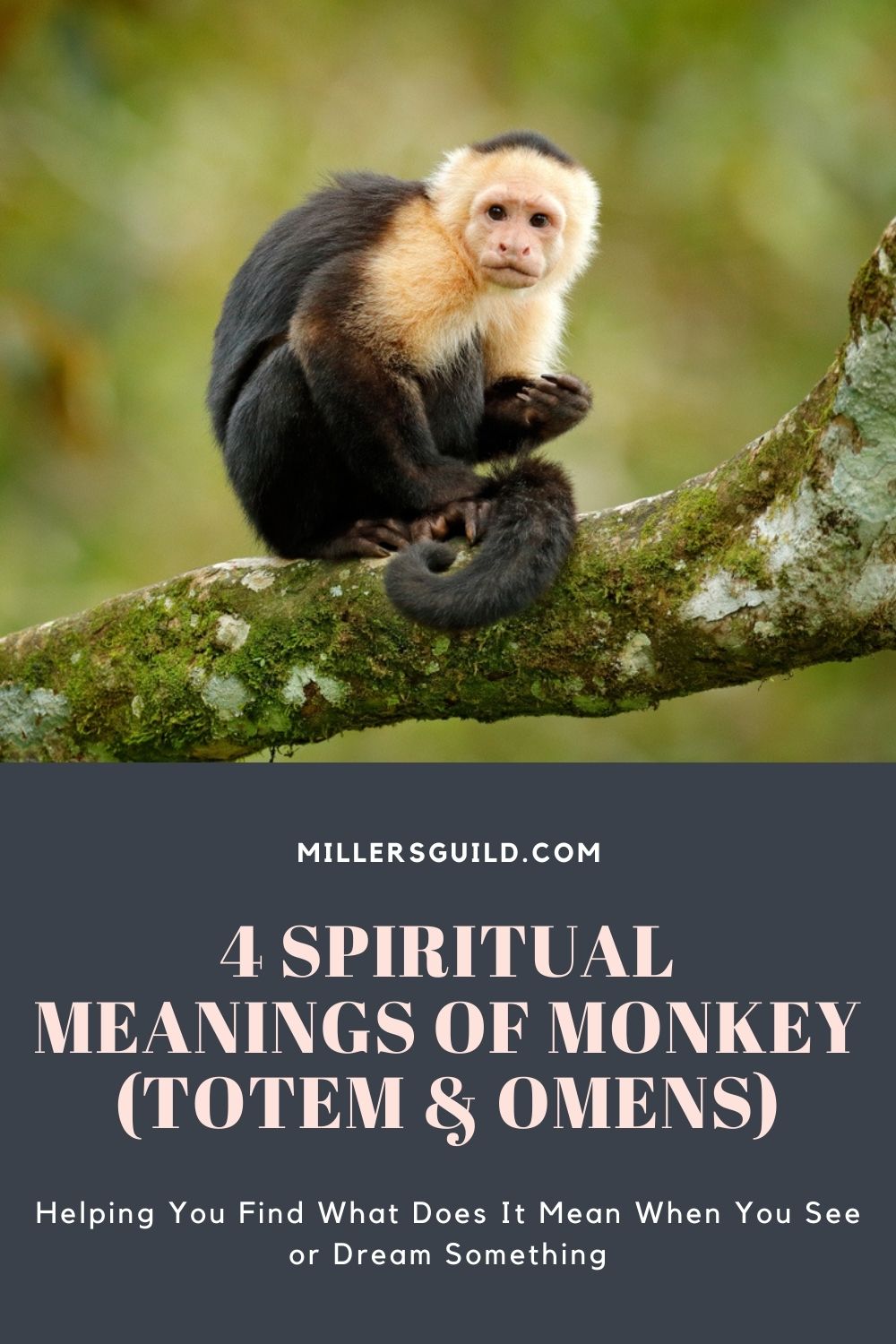