Since the dawn of humanity, the Moon has shone in the night sky, progressing through its never-ending cycle of waxing and waning, causing people to gaze up and wonder what it meant.

Unsurprisingly, the Moon has featured in the stories and mythology of people down the ages, and for anyone who wants to know more, in this post, we look at Moon symbolism and discuss what the Moon has signified to different peoples at different times. 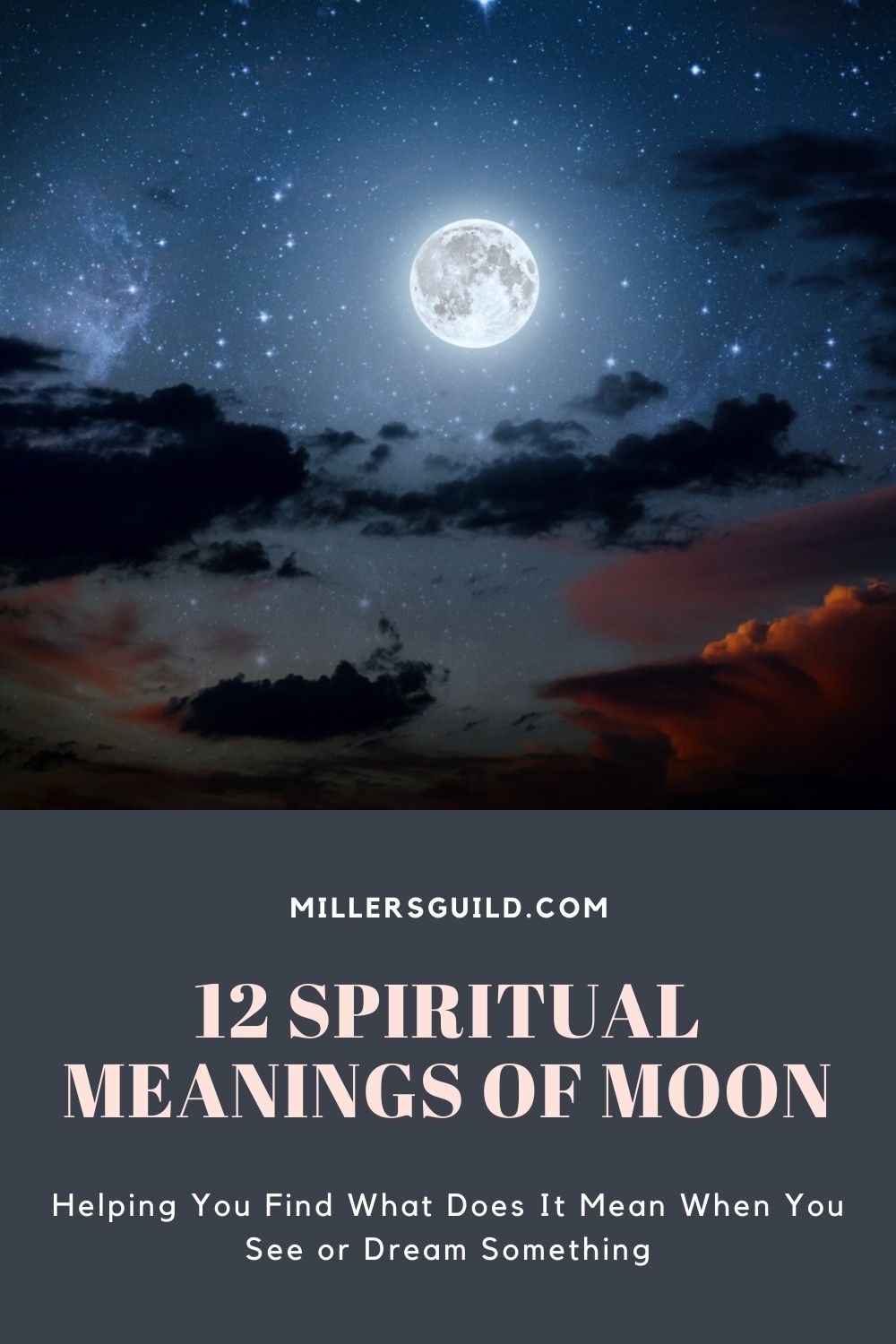 what does the moon symbolize?

One of the most commonly recurring symbolisms the Moon has had around the world is that of femininity and female energy – and in most cultures, the Sun is the opposite, representing masculinity and male energy.

This is partly related to the fact that the Moon doesn’t produce light of its own but instead reflects the light of the Sun.

As a result, the Moon represents traditional feminine traits such as passivity, gentleness and softness – in contrast with the Sun’s active, decisive, burning energy.

The shape of the full moon is reminiscent of a pregnant woman’s belly, and the Moon has also been connected to various deities related to women, pregnancy and childbirth in a range of cultures.

In Greek mythology, the Moon was associated with Artemis, the goddess of hunting, virginity and childbirth – and the Roman equivalent, Diana, was the goddess of woodland and women. Hecate, the goddess of cycles, birth and intuition was also connected with the Moon.

In Christian symbolism, the Virgin Mary was seen as having a connection with the Moon and is often seen depicted as standing on a representation of the Moon.

Similarly, in ancient Chinese belief, a goddess named Kuan Yin who watched over pregnant women and protected them during childbirth was also connected to the Moon.

However, while it is more common for the Moon to be associated with female energy and femininity, some cultures have seen the Moon as representing the masculine, with the Sun representing the feminine instead.

An example would be the Ancient Egyptian god Thoth, who was associated with secrets, hidden meaning and magic.

2. Cyclical nature of the universe

Since the Moon constantly goes through a cycle that includes the new moon, the waxing moon, the full moon the waning moon and then the new moon again, it has also come to symbolize the cyclical nature of the universe.

The cycle of birth, aging, death and rebirth is repeated countless times in nature, and the Moon’s phases are the perfect metaphor for this.

All animals and plants on Earth are born, mature, reproduce and then die, but when something dies, its offspring continue the cycle, so that each death is also a new beginning.

The same is true of the Moon. The final day of the cycle when the Moon disappears from sight is also the first day of a new cycle, and the following day, the waxing crescent Moon reappears, so with the “death” of the old moon comes the “rebirth” of a new one.

The new moon symbolizes birth, and then the waxing moon represents our progress towards adulthood. The full moon symbolizes the prime of our lives, after which we face a decline towards death.

This is the inevitable process we all go through, but just as with all cycles, the end also represents rebirth. This can be taken to mean the birth of the next generation, but for those who believe in reincarnation, it can also symbolize our rebirth into the next life.

4. The passing of time

Although the Western calendar is based on the Sun, many cultures traditionally measure the passing of time based on the Moon.

For example, the traditional Chinese calendar is based on the Moon, and the dates of important events each year, such as the Spring Festival (Chinese New Year) or the Mid-Autumn Festival, are determined by the Moon.

Mid-Autumn Festival is a Chinese festival that celebrates the largest moon of the year, and on that day, it’s customary to eat mooncakes (月饼 yuèbing).

Although we can’t see it directly, the Moon has a profound influence over all kinds of processes on Earth.

One of the most obvious examples of this is the way the Moon affects the tides, causing the sea to rise and fall due to the gravity it exerts.

For this reason, the Moon can symbolize invisible yet powerful influence and unseen control.

As well as affecting processes such as the tides, it has long been believed that the Moon affects human emotions and moods, and some people can become more active, irritated or emotional around the time of the full moon.

Words like “lunacy” and “lunatic” are derived from the Latin word for “moon”, luna. This is because people though that the full moon caused people to behave more irrationally and more emotionally than usual.

This is also seen in old superstitions and folklore – for example, it is supposedly the full moon that causes people to change into werewolves once a month.

Furthermore, the Moon doesn’t just affect the mood of humans but of animals too. Certain animals may become more agitated around the full moon – for example, the full moon is associated with wolves howling, also connecting it to beliefs about werewolves.

Since the Moon forms a pair with the Sun, it symbolizes balance.

The Moon and the Sun exist together and represent the dichotomy between dark and light, male and female, conscious and unconscious, ignorance and knowledge, naivety and wisdom and, of course, yin and yang.

There are countless such pairings in nature, and one half of the pair can’t exist without the other. This is fundamental to the functioning of the universe and is represented by the pairing and opposition of the Sun and the Moon.

As well as representing the dichotomy between conscious and unconscious, the Moon also symbolizes the subconscious mind.

As the Moon orbits the Earth, it constantly turns so the same face is always oriented towards us – and the far side is always invisible.

As the Moon goes through its phases, some of it is also hidden in the Earth’s shadow – except for on the night of the full moon, when we can see the entire disc.

However, the far side and the part that is hidden in shadow are still always there.

In astrology, the Moon is related to the sign of Cancer and the Crab.

Unsurprisingly, this sign is related to emotions, innovative thinking and traditionally feminine qualities.

Due to the connection with crabs – as well as the tides – the Moon also symbolizes the sea and the creatures that live in it, especially those with shells.

For this reason, the Moon symbolizes illumination, both literally and figuratively.

Ignorance is like living in the dark, and knowledge is the illumination of discovering and knowing the truth.

This can be applied to gaining knowledge about facts, for example knowing about history and what happened in the past, but it also applies to our spiritual journey and awakening.

For many people, before spiritual exploration and discovery, life can be thought of as like living in the dark.

However, through meditation and deep reflection, we can learn about the secrets of our existence, and this is like the illumination of the Moon in the light of the Sun.

Since the Moon comes out at night, it symbolizes the darkness, mystery and animals of the night.

There are many reasons why nighttime is associated with magic and mystery. The darkness hides things from sight, and we never know what is happening outside while we are sleeping.

The part of the night after midnight is known as the “witching hour” because at that time, most people are asleep and few people are about, and it’s also the time when the spirit world and the material realm are most closely aligned.

Animals such as owls, bats and cats come out at night, and these animals are also connected to witchcraft, so the Moon is a powerful symbol of the mysterious and unknown aspect of the hours of darkness.

The Moon is a symbol of love – and not just because the idea of two lovers sitting outside in the moonlight is incredibly romantic.

One reason the Moon represents love is that, as we have said, along with the Sun, it is one half of an inseparable pair.

Another part of this symbolism of love is that even when lovers are apart, they can both look up into the sky at the same time and know that the Moon is looking down on them both, connecting them, even when they are separated by distance.

The symbolism of the different phases of the Moon

From new moon to full moon and back, the Moon goes through eight distinct phases, and each phase has its own distinct symbolism – so let’s look at this now.

The old moon has disappeared, and although we can’t yet see it because it is hidden in the shadow of the Earth, the new moon has already been born and is full of the potential that is about to be released.

The waxing moon symbolizes the building up of the potential energies that will culminate in the full moon. This means the first part, the waxing crescent phase, represents new resolutions and ambitions that you wish to pursue.

Exactly half-way between the new moon and the full moon is the waxing half-moon. The Moon is in this state for only one night out of the whole cycle, and this special moment symbolizes the decisiveness and determination to reach your goals.

The Moon continues to grow in the sky each night as it works towards the full moon, and this phase represents the practicing and perfecting of the skills that are needed to achieve one’s objectives.

Finally, the Moon reaches its largest size, and on this one night, the whole disc becomes visible in the night sky. The full moon represents the culmination of all your efforts and symbolizes the fullness of life in its prime.

After the full moon, the disc once again begins to diminish, and this represents the time to take stock of all that you’ve achieved and to reap the rewards of your hard work and dedication.

The waning half-moon, like the waxing half-moon, only appears on one night of the cycle. It represents forgiving people who have wronged you and letting go of things that have upset you.

As the moon disc narrows ever more each night, the symbolism is of acceptance. The end is near, but it is inevitable, so you shouldn’t fight it. And as always, remember that with every end also comes a new beginning.

Various symbolisms according to different cultures

As we have seen, the Moon has symbolized different things to people around the world, although many of the ideas are surprisingly similar.

The Moon is usually connected with femininity and feminine energy, and it is also seen as representing the cyclical nature of the universe. Furthermore, it also reminds many people of the human journey from birth through to maturity to death and then rebirth again. 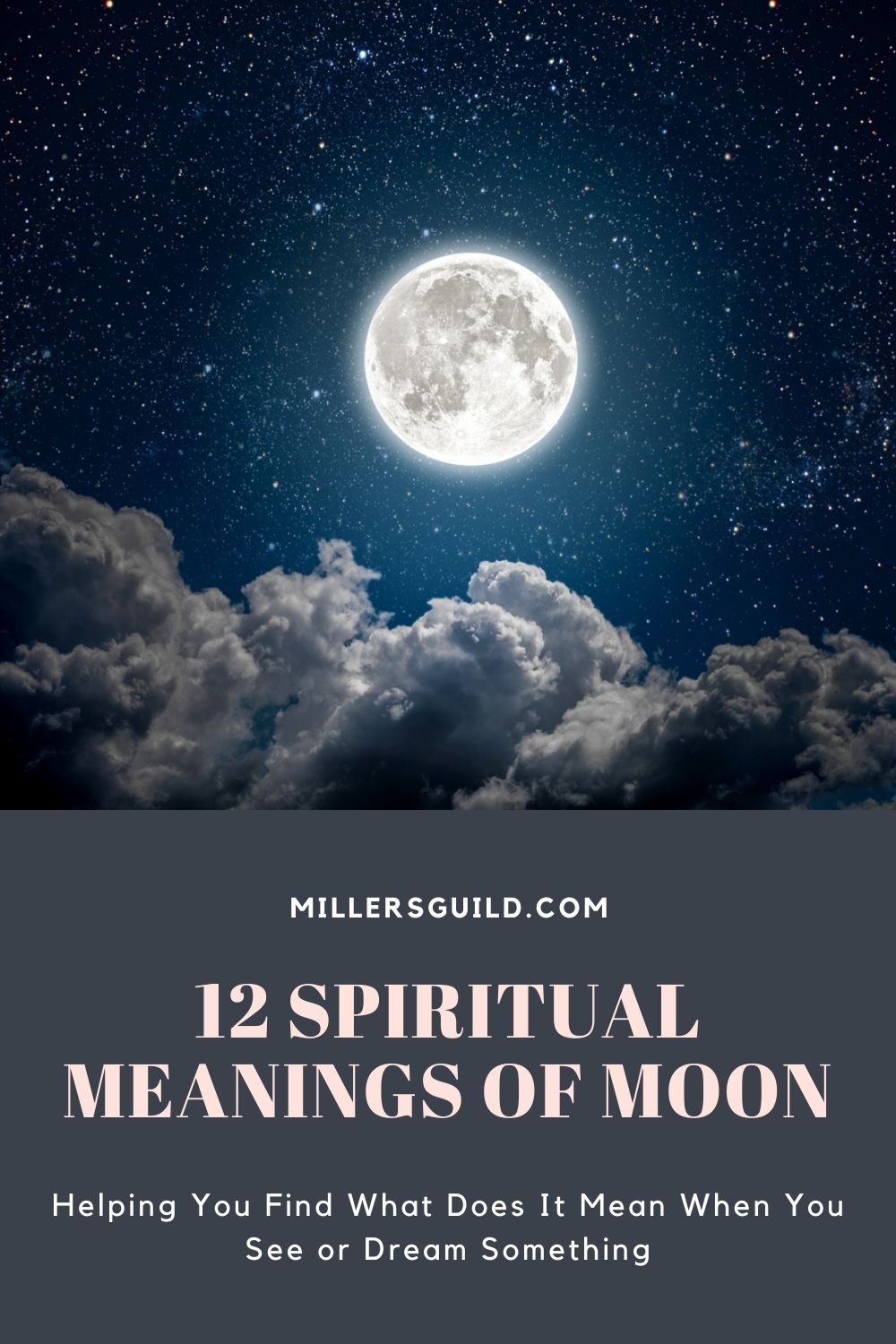 1 thought on “12 Spiritual Meanings of Moon”