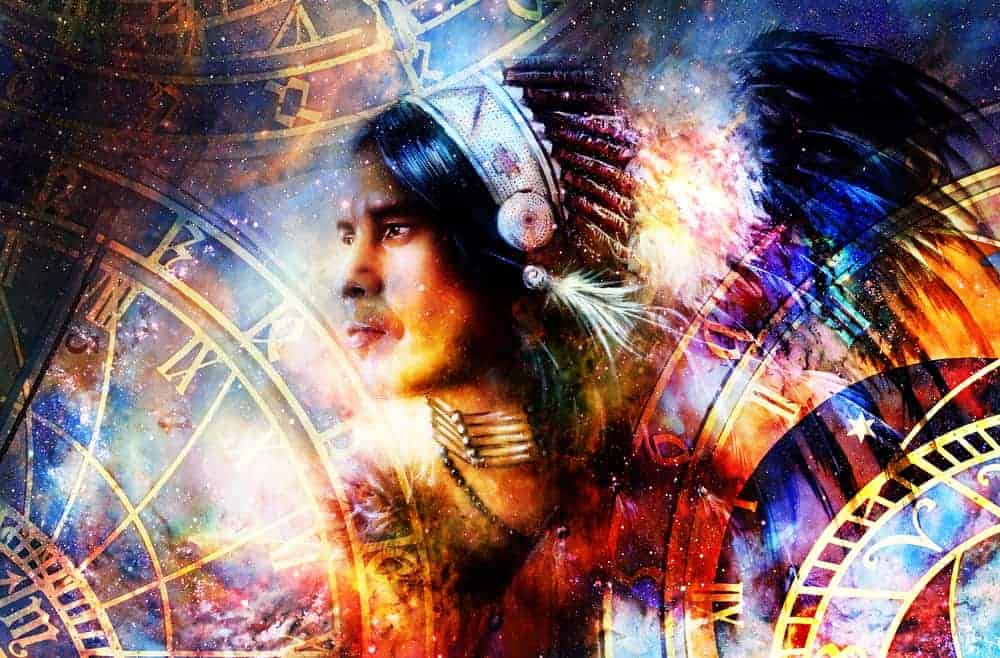 If you’re interested in astrology and regularly check your horoscope to tell you what the future has in store, you’ll also be interested in knowing about Native American signs and what they can tell you about you or your friends.

In this post, we talk about Native American zodiac signs, where they come from and what they mean so you can incorporate them into your spiritual life and use them to help you provide guidance when necessary.

What is the Western Zodiac and where did it originate?

Before we talk about Native American zodiac signs, it’s important to say a few words about the Western zodiac and its origins.

Thousands of years ago, before people knew that stars were balls of plasma like our sun, burning at unimaginable temperatures at inconceivable distances from the Earth, they must have looked up to the heavens and wondered what those enigmatic, flickering lights were.

Many civilizations, for example, the Hindus, the Chinese and the Mayans, imagined that those points of light that seemed to traverse the sky on predictable annual cycles could help us predict events on the Earth.

The Western system of astrology can be traced back to Mesopotamia – roughly the same as modern Iraq and Kuwait – and the 19th to 17th centuries BCE.

From there, it passed to the Ancient Greeks and the Romans, among others, and through the centuries, it was modified and refined until it became the system most people are familiar with today.

According to this system, the date when you are born determines your star sign, and this, along with other information such as the location of your birth, the location of various planets and other details, is then used to create your horoscope.

Since the Earth, the people on it and all celestial bodies are believed by astrologers to be connected, this information can then be used to make predictions about your future and give you guidance when faced with important decisions.

Did Native American tribes have their own zodiac signs?

When we talk about “Native Americans”, we are referring to a diverse group of peoples who historically inhabited a vast geographical area that encompassed all kinds of climates and terrains.

Even if we are only thinking of the indigenous peoples of what is now the United States and leave aside for the moment those from further north or those from Central or South America, we are still talking about a large number of disparate groups.

For this reason, it is hardly reasonable to expect that these people all had had the same or even similar systems of beliefs, and it would be pure fantasy to imagine that all the inhabitants of North America shared a single system of astrology before the arrival of the Europeans.

In reality, the various Native Americans tribes have a whole range of traditional beliefs and mythologies, some of which are shared with other tribes and many of which are not.

So in short, before the arrival of European ideas in North America, there was no common “Native American zodiac”, and Native Americans didn’t have zodiac signs akin to the 12 signs of the Western zodiac.

However, the story doesn’t quite end there.

During the middle of the 20th century, a man named Sun Bear (born Vincent LaDuke) of Ojibwe ancestry, set about trying to bring many of the disparate traditions of the Native American tribes together into a kind of “pan-Indian” belief system.

One of the central aspects was known as the “Medicine Wheel”, and this essentially combined some concepts from the Western zodiac with symbols, ideas and references from various Native American cultures.

His work on “Native American astrology” was not welcome by all though. Many Native American groups accused him of cultural appropriation and profiteering, and it aroused considerable animosity among some communities.

However, others believe that this synthesis only enhances what we can learn from the Western zodiac, giving us deeper insights into the universe, our purpose and our connection to the spirit realm thanks to the addition of ideas from Native American philosophy.

According to Sun Bear’s work, the year is divided into four “spirits”, which coincide with the four seasons.

In line with much of Native American tradition, these signs and their meanings emphasize our place in nature and our harmony with all the animals we share the world with rather than our dominion over them.

So now let’s look at what they are and how they can be interpreted.

The 12 signs of the Native American zodiac

Here are the 12 signs of the Native American zodiac and what they mean.

Hawks are powerful personalities that make good leaders. Like the bird, they have clear vision and know precisely where they are going, which helps them make quick yet wise decisions. They can be intense characters, and they never hesitate to do the right thing when necessary.

At the same time, due to their confidence and drive, they can be overbearing at times. Sometimes they can also be seen as haughty or arrogant due to their demanding personality.

Those who belong the sign of the Beaver are industrious and hardworking. They know how to make a long-term plan for the future and then will stick at it until the plan comes to fruition. They are resourceful and driven characters who don’t stop until they achieve their goals.

Beavers can be motivated by material possessions, and they can also be highly possessive and even jealous in friendships and love. But at the same time, they are extremely faithful and will do everything they can for those they care for.

Deer people are alert and intelligent and are able to react quickly when required. They are reserved types and can often be quite timid, but they’re also great talkers, and this soft side of their personality makes them likeable characters.

They are good at bringing people together and are helpful in resolving disputes. However, they can be capricious on occasion, changing their mind quickly, and deep down, they often feel unsettled or unsure.

Woodpeckers are associated with strong homemaking instincts and love their families above all else. They are the kind of people that will do everything in their power to provide whatever their loved ones require.

Another trait of people born under this sign is tenacity and perseverance, just like a woodpecker pecking out a nest in a tree. However, their devotion to their families can become smothering, and having a Woodpecker for a parent can make your teenage years tough.

Among the most prominent traits of people born under the sign of the Salmon is their sense of purpose and their determined yet enthusiastic pursuit of their long-term goals. Once they set their heart on something, they will devote themselves to it, however long it takes.

However, this single-mindedness can make them seem egotistical and self-obsessed, which may make them unpopular with people who don’t understand them.

Bears are seen as level-headed deep thinkers who enjoy working out challenging puzzles. This makes them great people to ask for advice, but you may have to give them time to consider their answers.

They are eager to please others but often keep to themselves. They can also be unwilling to change their ways, they value their personal space and at times can appear lazy.

Ravens are seen as wise and thoughtful, so, like bears, they often give good advice. They can be diplomatic too, so are good people to help resolve a dispute.

They are often motivated by material wealth and love doing business. However, their business acumen is sometimes undone by a certain indecisiveness at the vital moment.

They are passionate about their projects, but this can cross into being over-demanding of others. However, when they wrong you, they are the first to apologize, so you won’t be upset for long.

Snakes are known for being secretive, so if you’re friends with a Snake, you might not always know the full story. However, they can keep a secret too, making them good listeners, so they’re good people to confide in when you need to talk.

Snakes are associated with the spirit world and have certain healing powers. Many medical professionals are born under this sign. However, make sure you don’t wrong a snake because their anger can be terrible.

People born under the sign of the Owl are among the wisest and are restless seekers of knowledge and truth. They can be enigmatic, inscrutable characters, but they are extremely clear-sighted, cutting through the confusion to see things as they really are.

On the downside, Owls are unlikely to suffer fools kindly, and if you ask for advice, don’t be surprised when the answer is more direct than you expected.

The character of people born under this sign are ambitious and driven and will pursue their goals with patient determination until they achieve their dreams.

They have high expectations of themselves and also won’t accept second-best from others, making them demanding bosses to work for.

A negative side to their personality is that they can become frustrated when things don’t meet their standard, and they may become despondent when they can’t make things right.

Otters are independent and unconventional and like to do things their way. Many people might not understand their methods, but they are highly intelligent people, and if you let them just get on with it, the results may surprise you.

They are lively, friendly and sociable people. However, their individuality and unpredictable ways might mean they don’t get on with those born under more conservative signs.

Wolf people are devoted to their family and friends, and they will do anything for those they are close to. However, they can sometimes be loners, and all people born under this sign need space and alone time occasionally.

They often prefer to be followers rather than leaders, and they commonly keep to themselves, which makes them seem aloof and sometimes mysterious. However, they are among the most loyal friends you can have – as long as you treat them with love and respect.

An animal to help you on your spiritual journey

So as we have seen, although Native Americans didn’t traditionally have zodiac signs in the same way as Western astrology does, each of the 12 Western signs is associated with a spirit animal, and this can help you understand more about yourself or your loved ones.