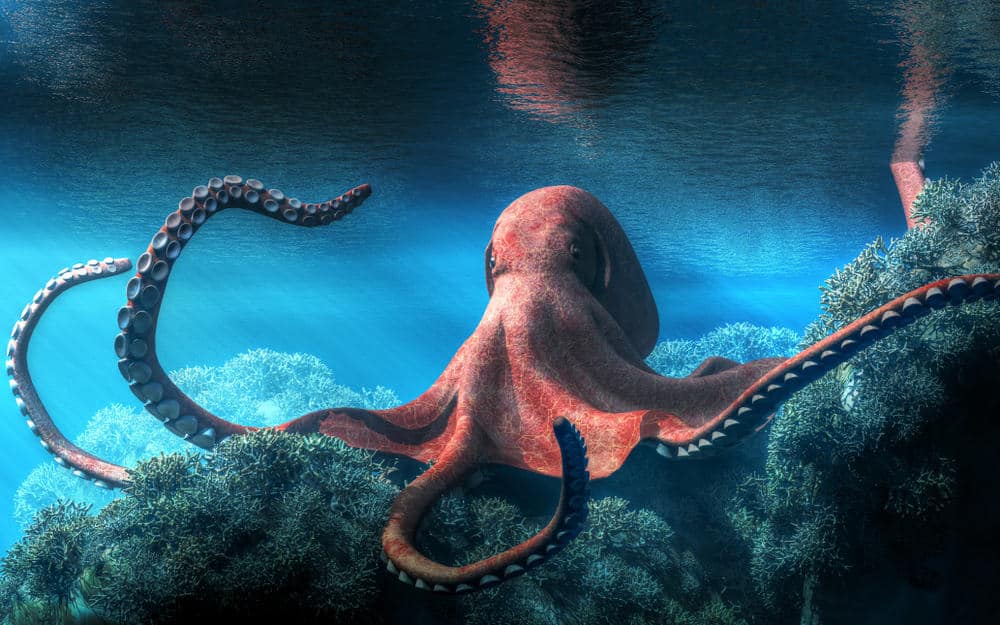 Octopi have captured the fascination of human beings for millennia.

These spineless, eight-legged creatures have many intriguing qualities and are among the most intelligent undersea animals.

Sightings of an octopus are rare. But, whether you encounter one in your dreams or waking hours, this undersea creature comes to teach you important life lessons.

Octopi are considered intelligent, self-aware, protective, and canny. They know how to make the most of opportunities without putting themselves in danger. They also know how to come out of tricky situations

You have come to the right place to learn more about octopus symbolism and its meaning. This article will explain the various meanings behind encountering an octopus.

Without further ado, let’s get started! 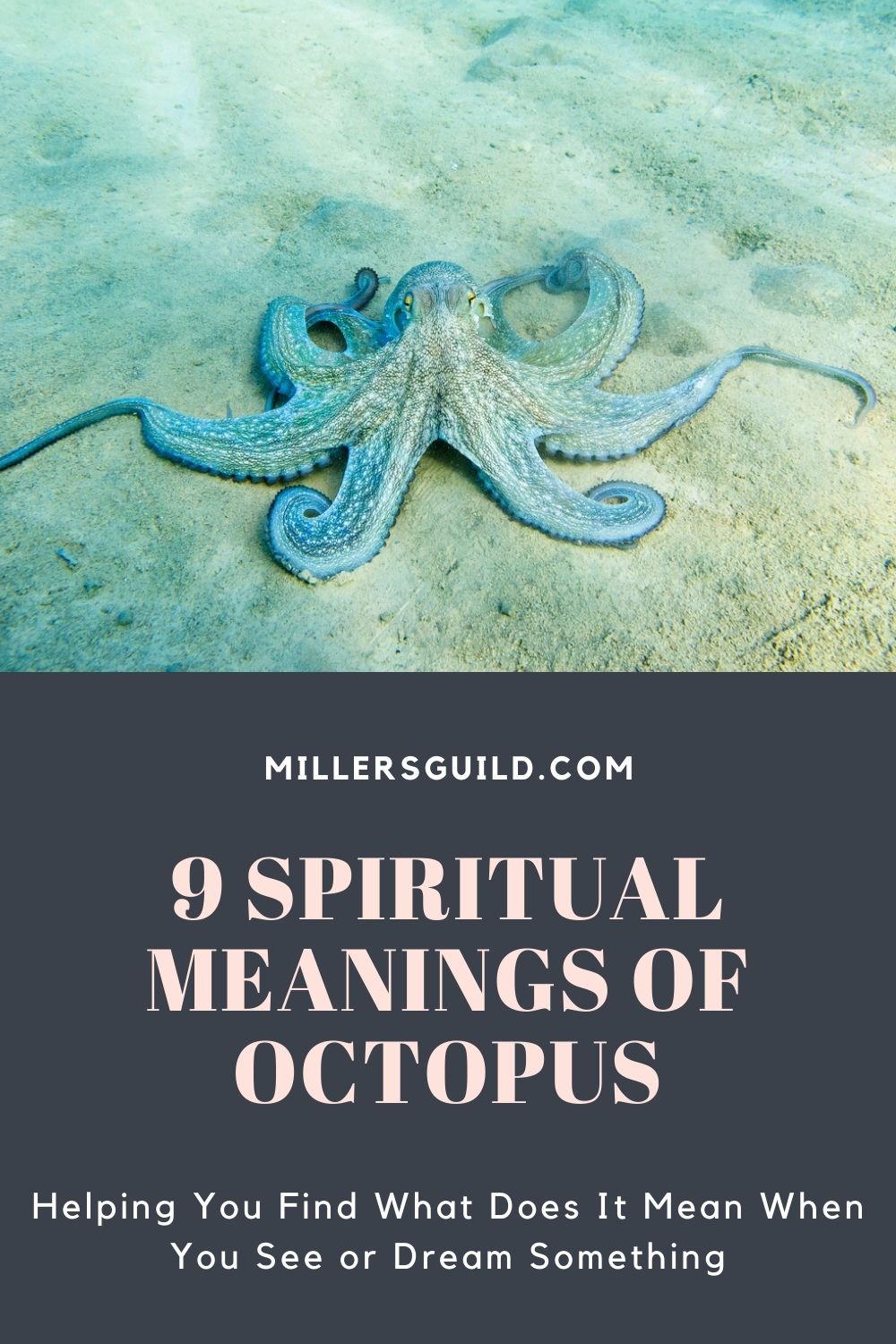 Popular culture in Hollywood films depicts the octopus as a scary and evil deepsea creature. But, in many other cultures, this eight-legged animal is considered a good omen.

Among the ancient Japanese tribes, the octopus was viewed as a sex symbol, with the eight tentacles each representing water-bound maidens. The tribespeople also believed that the octopus’s ability to shapeshift means it could transform itself into a human to seduce women.

In Chinese folklore, the octopus is believed to have healing powers. In particular, it was said that drawing the animal on a piece of paper and placing the paper on an earthen stove could heal whooping cough.

According to African mythology, the octopus is quite similar to the snail. Both animals might be slow movers, but they are also determined. Stories depicting the octopus were used to teach the importance of being ‘slow but sure.’

Among the Celtics and Scandinavians, the octopus was depicted as the swastika and symbolized healing, good luck, and longevity. This was long before the swastika was adopted as a Nazi symbol.

All in all, the octopus is considered to be a versatile, intelligent, and resourceful animal. People with the octopus as their animal spirit tend to have an uncanny ability to get themselves out of trouble.

Octopus people use stealth mode and silence to win in difficult situations. They quietly make the most of the opportunities availed to them, but they are also resourceful enough to make way for themselves.

Now, let us look at specific octopus symbolism and meanings.

what does an octopus symbolize?

Of the fascinating facts about the octopus is its body to brain ratio. This invertebrate has a large brain in the head and even more brain neurons in its eight tentacles.

Clearly, this is a very brainy animal, to say the least.

The octopus’s intelligence can be seen in many of its amazing behaviors. For example, it can change color and shape when in a precarious position. Or move from one underwater den to another without its predator noticing.

The octopus is a great symbol of intelligence. Octopus people are smart, resourceful, and always seem to get what they want.

When an octopus appears to you, it is a reminder that you can tap into your own intelligence to get what you want.

Instead of giving up in the game of life, you must be resourceful and find ways to thrive. Tap into the energy of your octopus spirit animal for smart ideas on how to maneuver through life.

An interesting quality of the octopus is its ability to camouflage and shapeshift on demand.

If an octopus appears in your dreams or real life, whether in an art form or its natural habitat, it is a message that you have what it takes to get yourself out of challenging situations you find yourself in.

Tap into the octopus’s energy as your spirit animal for insights and ideas on how to solve problems and stay one step ahead of your enemies. 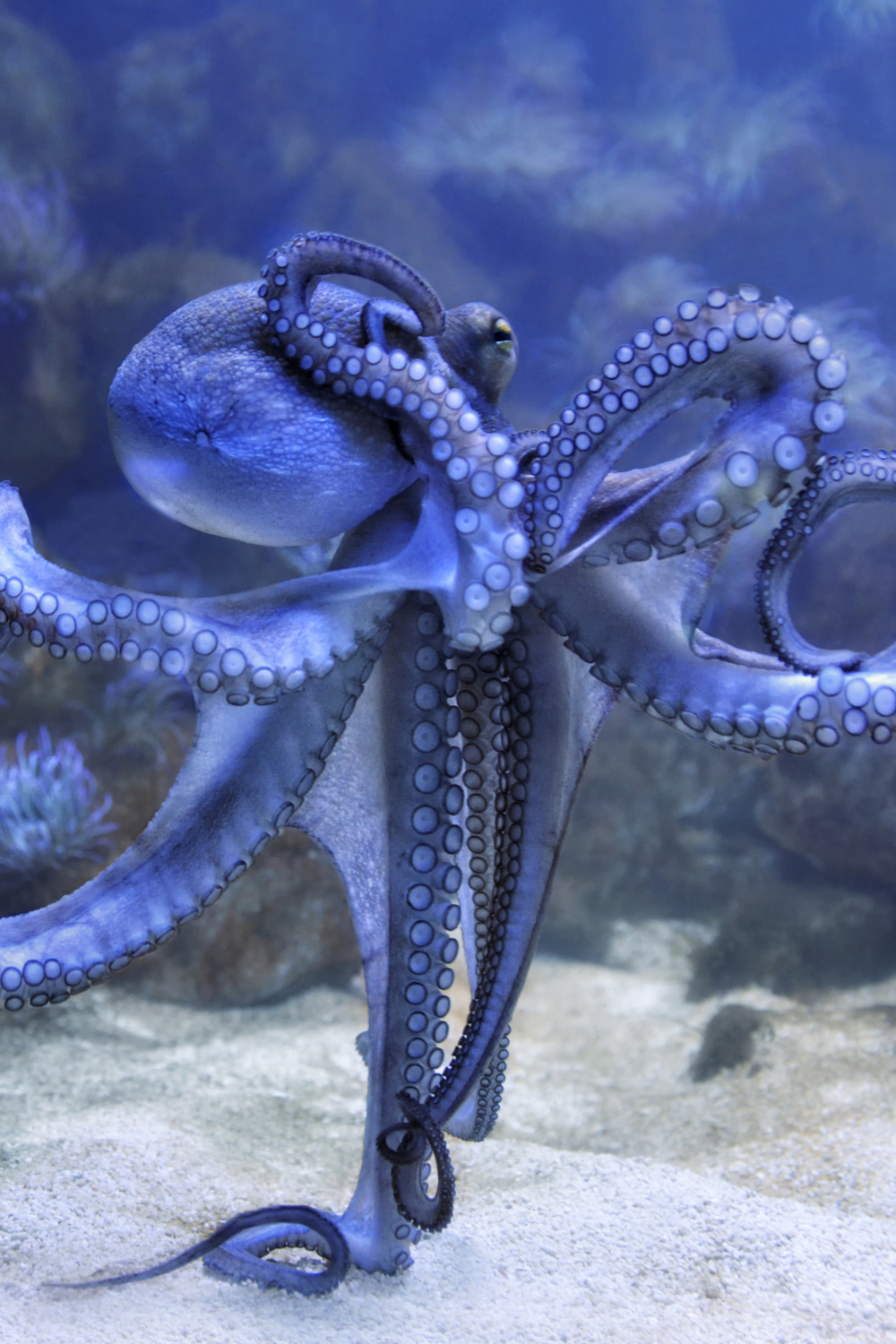 Another interesting fact about the octopus is its ability to regrow its limbs. Whether its limb is bitten off or injured, the octopus can grow another!

For this reason, the octopus symbolizes growth and healing. If you are going through a difficult time and an octopus catches your attention, it is a message that you can heal and even grow from your experience.

It might not always seem like it, but difficult situations are some of our best teachers. We often need to go through a tough time to learn great lessons and spur our growth.

Like the octopus, you have what it takes to heal, regenerate, and grow.

4.  You have what it takes to make changes

Are you looking to make some changes in your life but are too afraid?

When the octopus appears in your experience, it sends you a message that you have everything you need to make and embrace change.

The octopus is versatile. It changes its appearance and responds to the environment accordingly.

It doesn’t hesitate or doubt itself; it does what needs to be done to survive and prolong its life.

This eight-legged invertebrate teaches you not to fear change or when the situation calls for it.

If you need to change your appearance for whatever reason, do it. If you want to change your career, friends, house, location, car, you have what it takes to make these changes and to build the life you want.

5.  Give to others and protect what you value the most

The octopus is the epitome of what it means to be selfless for those who matter the most to you.

Soon after mating, the male octopus dies, leaving behind the mama octopus, who fiercely protects her eggs until they hatch.

It is common for the female octopus guarding her eggs to forego going to hunt for food to ensure her young ones are well-protected at all times.

People with the octopus as their spirit animal usually give and protect their loved ones. They are also into charity and will give their time, efforts, and possessions to deserving individuals and organizations.

The octopus reminds you to be more protective of your loved one and the things that matter the most to you.

If you have slacked a bit in this regard, now is a good time to give more of yourself to people and causes that matter to you. There is no need to hold back in a world already full of self-centred people.

The octopus has thousands of neurons all over its body, making it an incredibly sensitive animal.

With many neurons all over its tentacles, the octopus experiences its environment in a very deep and personal way. Every movement, sound, touch, and smell is felt throughout its body intensely.

The octopus’s complete awareness of its environment symbolizes deep, conscious self-awareness. Feeling every aspect of your environment also means trusting your intuition to understand what is going on.

When the octopus appears in your experience, you are encouraged to hone and trust your intuition. It is also a sign of the importance of practicing self-awareness.

With self-awareness comes emotional intelligence. This is the ability to understand others and situations better to formulate the best way to move forward.

Emotional intelligence can help you draw people closer to you and put them on your side. It can help you minimize conflict and form better bonds with others.

The octopus further reminds you to trust your intuition. Your intuition is the Universe’s way of speaking to you and helping you understand situations, places, and people better.

Everyone has intuition, but not everyone has honed it enough. The good news is you can strengthen your intuition and use it as your guide as you make your way through the world. 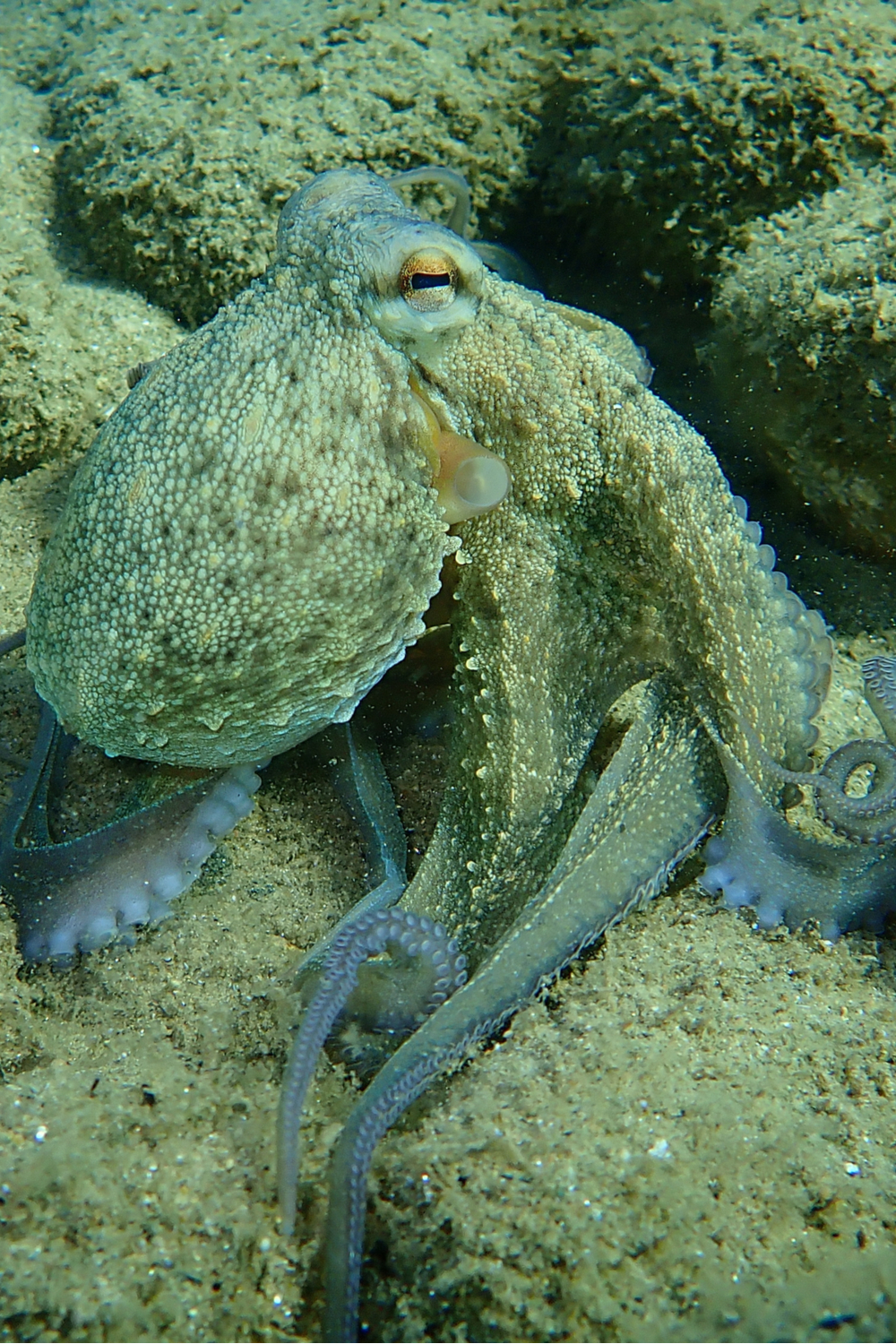 Although the octopus has many positive symbolisms and meanings, it can also be a bad omen. When you dream of octopi, it could symbolize infidelity or some form of deceit.

This could signify that you need to pay more attention to your close relationships. Like the octopus, you should trust your intuition.

An octopus knows how to trick its predators and escape from danger. It can also change its shape and color when necessary to adapt to the environment.

It is not always easy to detect when someone is lying to you. Cheaters know how to quickly adjust to cover their tracks and throw you off guard.

If you have been suspecting deceit and the octopus appears in your experience or captures your attention, this could be a message your suspicions could be founded in some truths.

The best way to move forward is with equal stealth and silence to avoid rattling your cheater. Eventually, you will unveil their deceitful ways.

8.  Oneness with the Universe

If you spotted a connection between the octopus and the number eight, you are right!

The octopus has eight tentacles, and this is considered a divine sign. The number eight turned sideways represents the infinity symbol, which can symbolize the endlessness of the Universe.

In many cultures, the number eight has a special association with the Divine, God, Source, Universe or any word you prefer to refer to the overall creator.

In this regard, the octopus symbolizes our oneness with the Universe, a concept that can give us comfort and a sense of purpose.

When you are one with Universe, it means you are an important player in co-creating your reality and entire life. Being one with the Universe is a call to trust life and go with the flow because the Universe has your back at all times.

If you are looking for new opportunities, the octopus spirit animal reminds you that the opportunities are endless and that we live in a world of infinite chances and opportunities, so you do not need to despair.

9.  Flexibility and letting go of the past

Strong, long, and free-flowing as the octopus’s tentacles maybe, this animal doesn’t hold onto everything that comes on its path.

Therefore, the eight-legged creature symbolizes flexibility and the importance of being inflow. Going with the flow doesn’t mean being passive; it means choosing the path of least resistance so you can reach your goals easily and faster.

The octopus also encourages us not to hold onto everything that comes our way. Not everything is worth paying attention to or investing our time and emotions.

It is also important to learn how to let go of the past. Let your heart and mind be free like the tentacles of the octopus. For this to happen, you must start letting go of the past. And, yes, you have all the tools and resources you need to do this!

Pop culture depicts the octopus as evil and scary creature. But, in the spiritual realm, this eight-legged creature of the sea holds a lot of positive symbolism.

Tap into octopus energy for intelligence and flexibility. With the octopus as your spirit animal, you can reach out for a stronger intuition and the ability to make the most of opportunities.

More importantly, the octopus symbolizes healing, growth, and your oneness with the Universe—all great reasons to reach out to octopus energy as your spirit and totem animal. 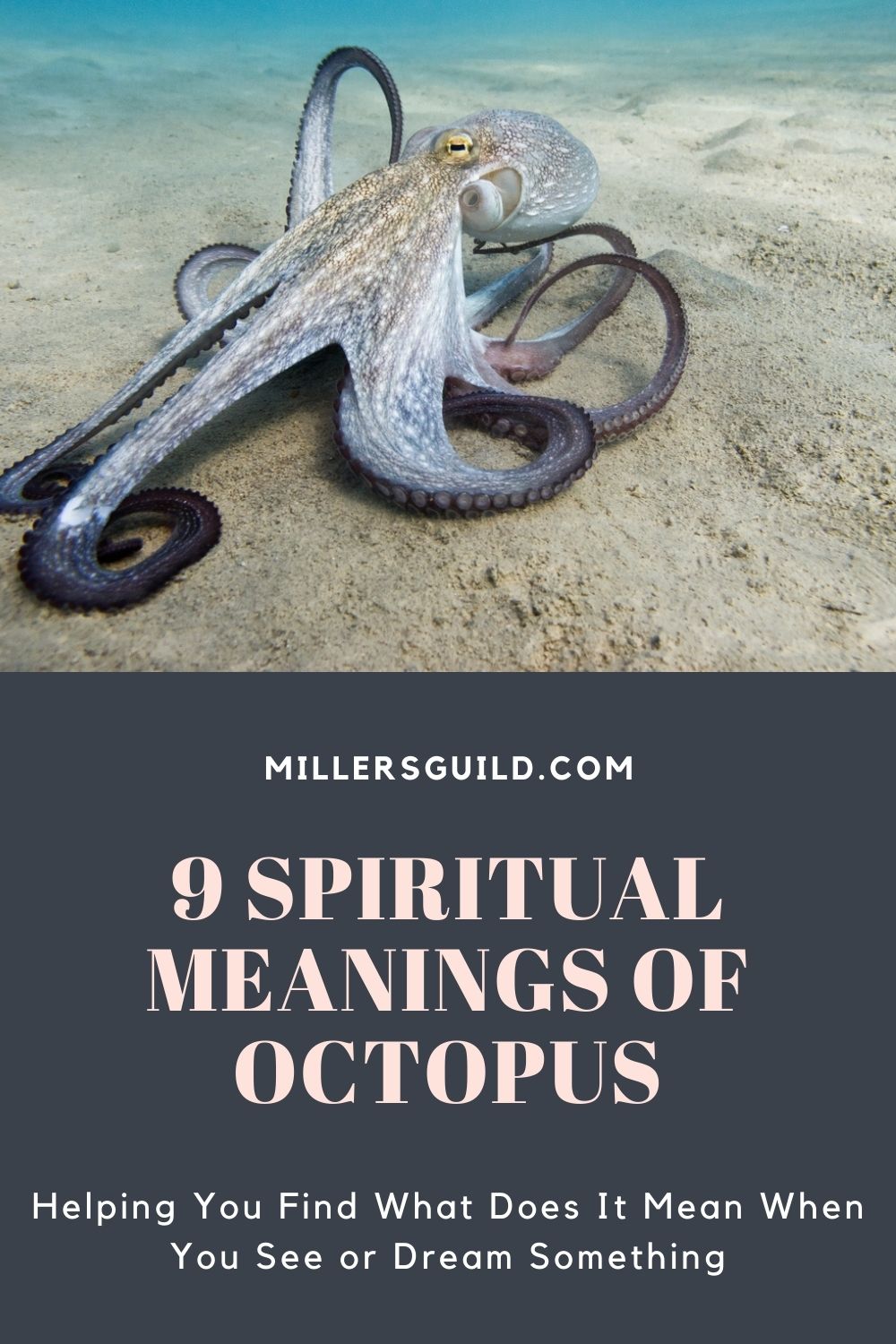 3 thoughts on “9 Spiritual Meanings of Octopus”