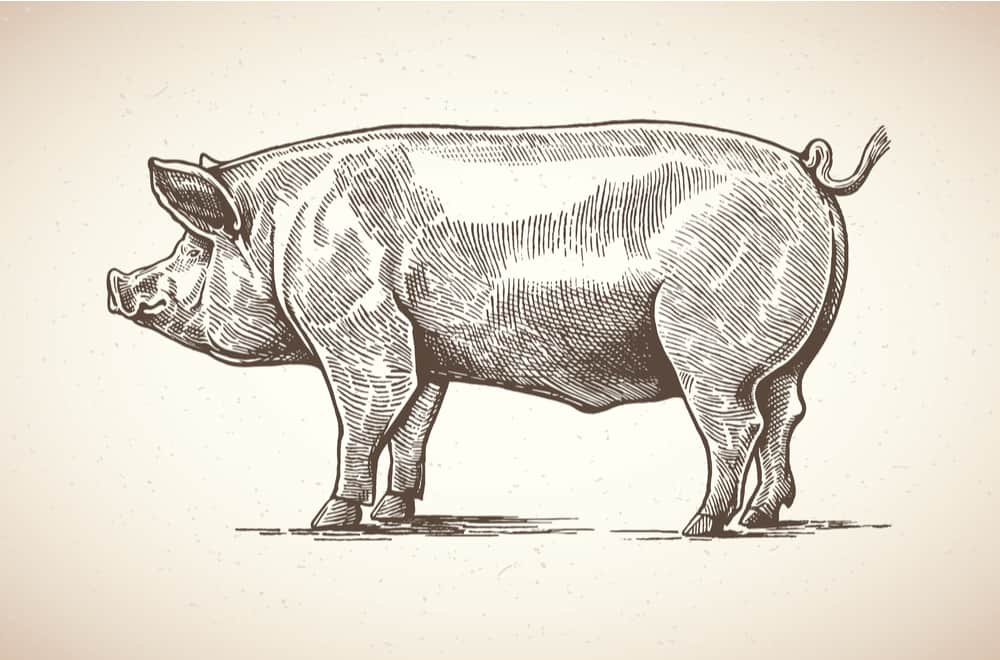 When it comes to animals sharing their spiritual teachings and conveying messages and spiritual meanings, pigs aren’t the animals who make it to our lists, are they?

Although notorious for being lazy, unhygienic, greedy, and decadent, you’d be surprised to see how great spiritual guide pigs are! If you feel connected to pig spirit animals in an unexplained way, this is just the post for you. 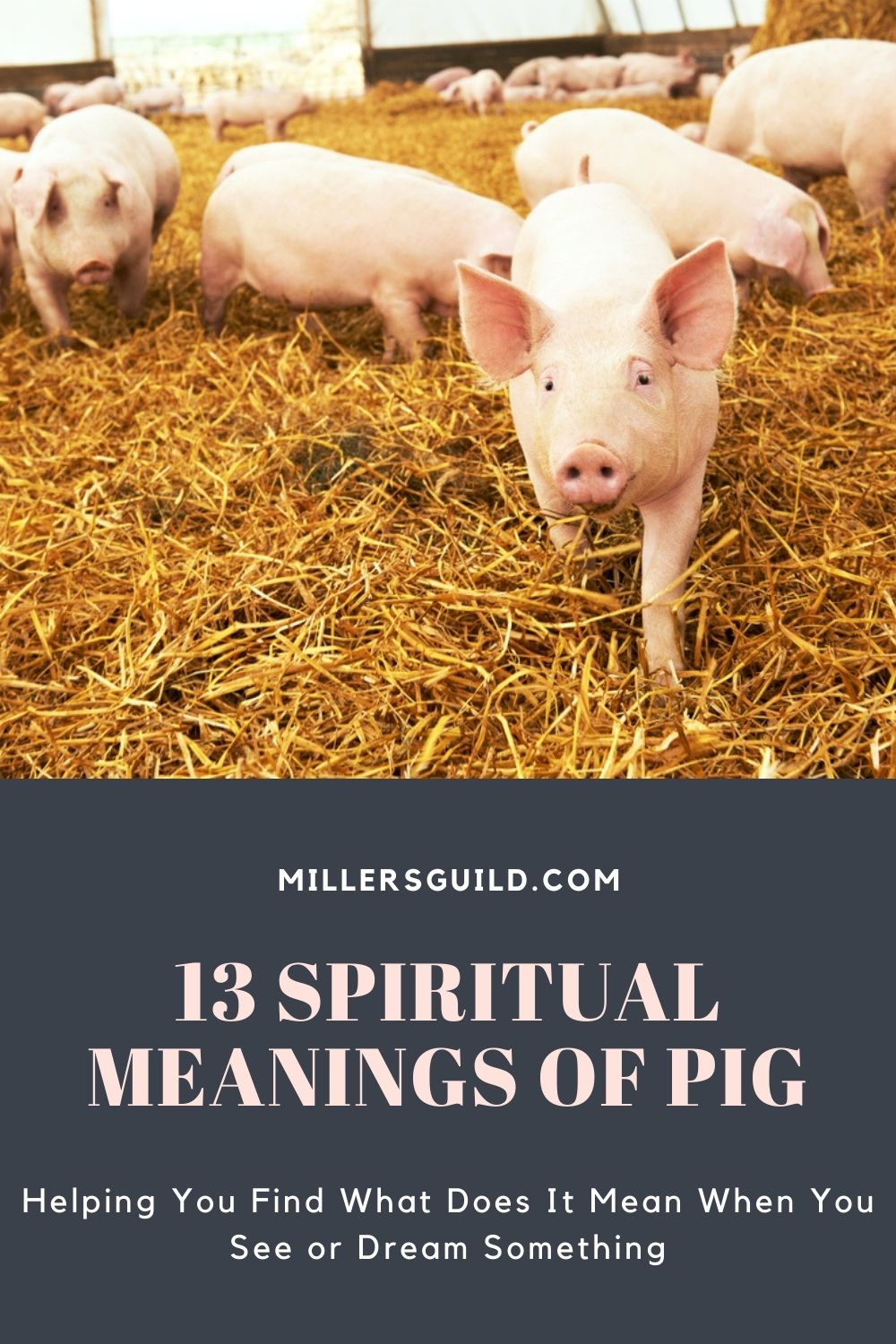 what does a pig symbolize?

Pigs do what they need to do in order to survive. They relentlessly search for food, grow, thrive, and do not care about their notorious image. Pig spirit animal suggests we mind our own businesses and don’t care about what others have to say behind our backs.

They tell us to take charge of our lives and don’t let other beliefs, opinions, and judgments stop us from pursuing what we truly desire. Give weightage to your values and opinions, not others’.

In the Chinese Zodiac, the symbol of boar is associated with sincerity and determination. You might know, but it is believed that pigs are serious about pursuing whatever they have set their minds on.

Pigs can be one of the best spirit guides when you need to shift your focus to something meaningful and grand. Pigs not only urge you to focus on your goals but also push you to build connections and find the power you need to actualize your dreams.

Sometimes, pigs might be trying to convey a spiritual message that you aren’t being surrounded by trustworthy and honest people. Or, you’re getting indulged in a bad company that motivates you to get involved in unscrupulous activities.

Pigs urge you to be aware of those who open your gates of personal and professional lives to. You want to put effort into making sure that well-wishers with plenty of optimistic energy surround you. 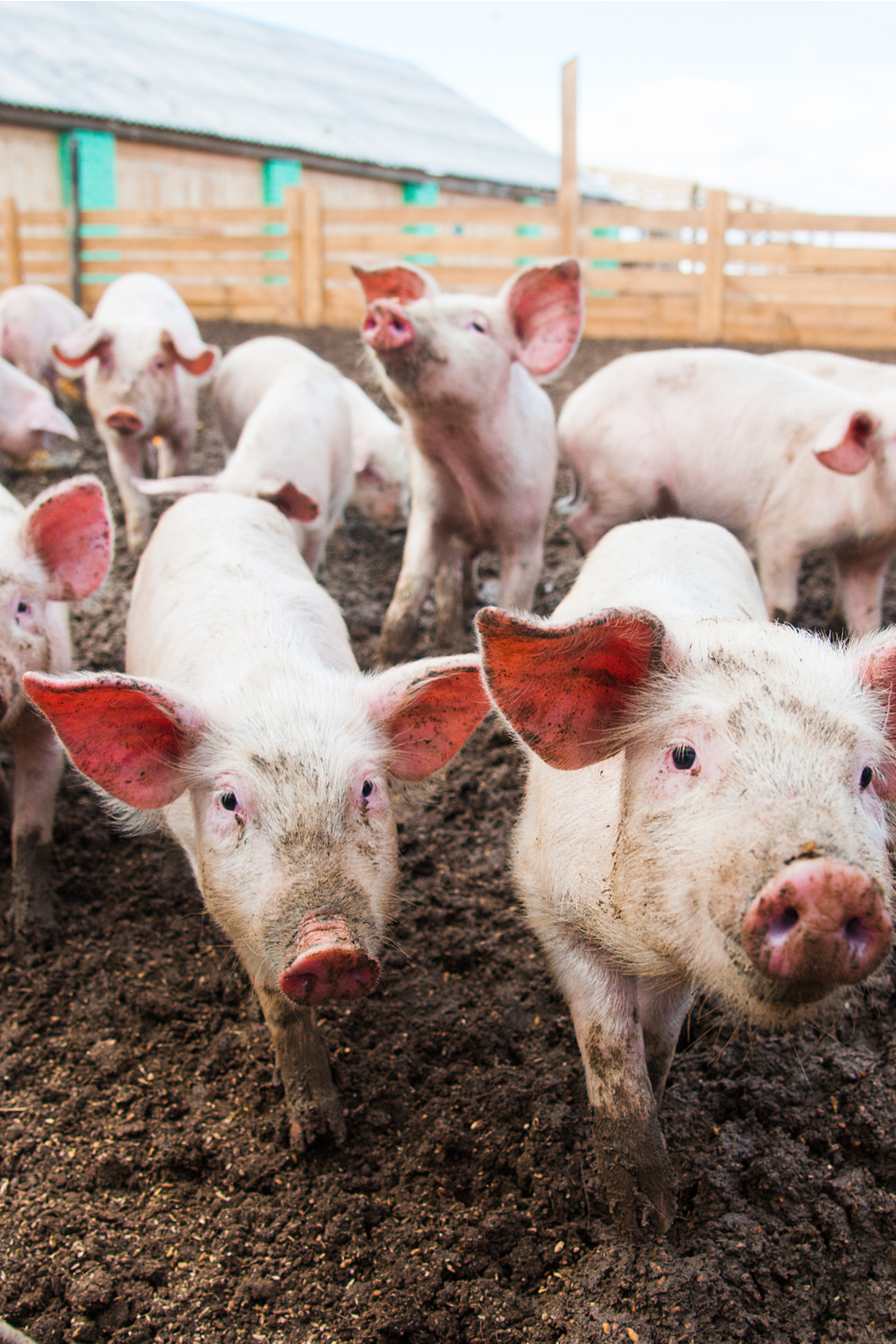 Black pig spiritual meaning, according to Buddhism, is associated with one of the three poisons which force men to be trapped in the cycle of life, death, and rebirth.

In the wheel of life, a pig symbolizes ignorance or delusion, a bird symbolizes attachment or greed, and a snake symbolizes aversion or ill-will.

These three poisons are believed to inflict craving and suffering on humans. And only when humans get rid of these poisons are they believed to attain Nirvana or enlightenment. Moreover, in ancient Christian symbolism, pigs are associated with greed and laziness.

Pigs are looked down upon as unhygienic and lazy animals. Yet, they keep thriving and being unapologetically themselves. They teach us that not everybody has to agree with our lifestyle, thoughts, and actions. You’re different doesn’t mean you’re any lesser than others.

Piggies guide us towards accepting our flaws and realizing our self-worth. Though no human on this earth is perfect, each one of them is worth a good life, love, and happiness. Therefore, pig spirit animal urges us to never look down upon ourselves.

In Ancient Egypt, pigs were the symbols of fertility and were closely associated with the Egyptian sky deity, Goddess Nut, The Great Mother. Likewise, pigs were considered sacred to Isis, the daughter of Sky Goddess Nut and the Earth God Geb, and the deity of creation and birth.

7.  Good luck, wealth, and abundance are on your way!

Historical speculations are that the word ‘Piggy bank’ was coined because the pots to hold money during the Middle Ages were made up of Pygg, an orange-colored clayish material. Surprising to know that Piggy banks had nothing to do with pigs, isn’t it?

Nevertheless, plenty of cultures believes that pigs spiritually mean good luck, wealth, and abundance. For instance, some Native American tribes symbolized pigs as the symbol of fertility and abundance in crops. They believed pigs to be the harbinger of the rain.

Similarly, pigs were often sacrificed to Greek Gods and Goddesses, Ares, Demeter, and Gaia, the deities of agriculture. The sacrifice was widely believed among Greeks to bless them with suitable weather and fabulous crop yield.

Moreover, Manannan, a Celtic folklore legend, is depicted to own a pig heard that would replenish itself. With this belief, ancient Celtic culture symbolizes pigs for abundance.

8.  Hustle in private and let your success make the noise!

Pigs do not publicize their actions. They hustle for food in silence; they prefer to mind their own businesses and eat and dig when nobody’s watching.

So, pigs spiritually tell us not to give our game away and, therefore, plan and hustle in private. Let your results speak to your haters and ill-wishers.

‘Pig’ is often used as an insulting word to those who eat voraciously or are extremely greedy to the point of committing unscrupulous activity for profit.

Pigs are omnivorous, meaning they eat whatever they find as they do not choose in between plant or animal products. What’s more, they have a huge appetite!

Many claim that pigs gorge on whatever that they are provided with and hence their association with greed. While this assumption might not be entirely true, it is a fact that pigs easily gain an unhealthy amount of weight when left unmonitored. 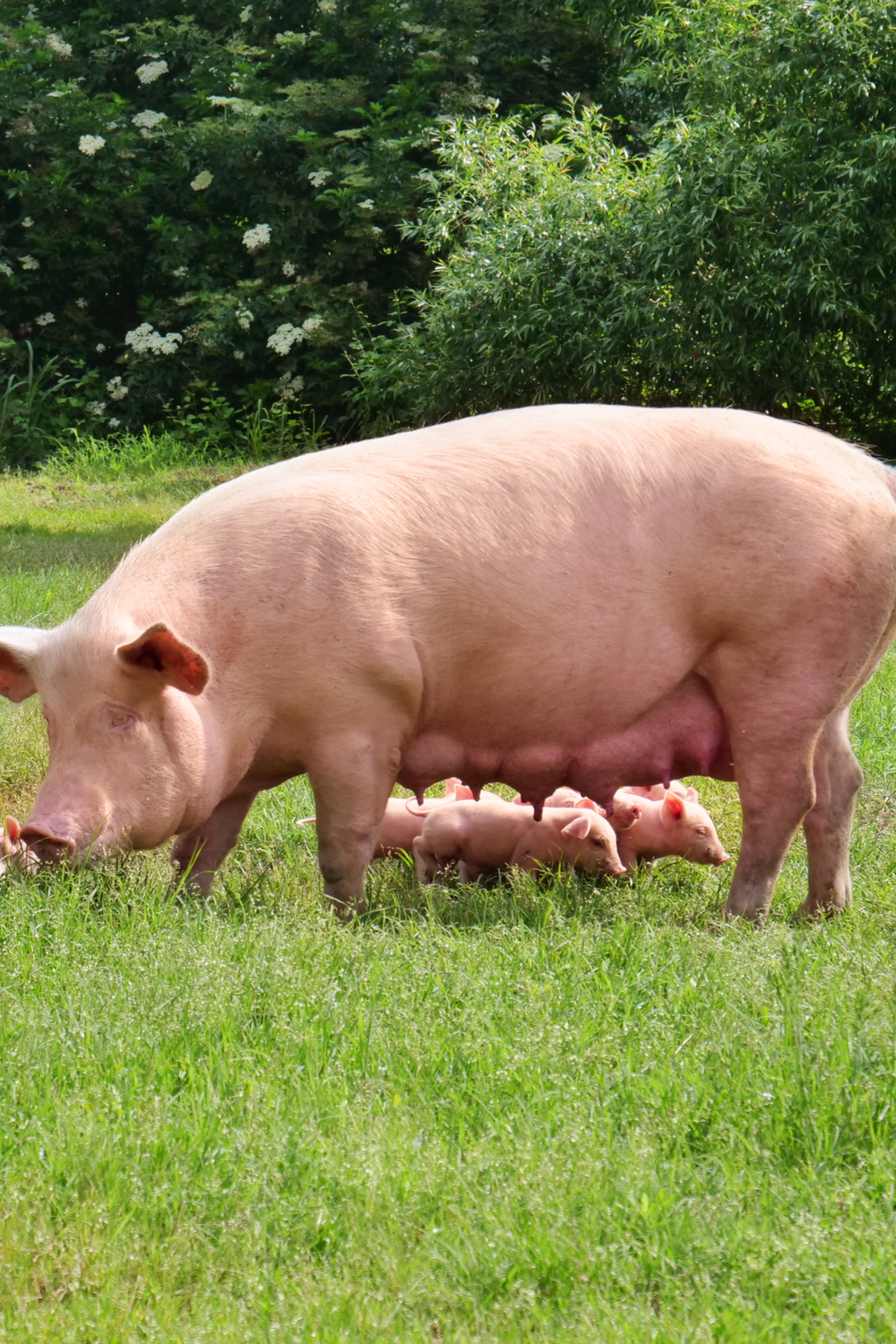 In many religions such as Jew and Islam, eating pork is forbidden, as they are considered to be hygienic and carriers of diseases. While the spiritual meaning of pigs in the Bible is associated with uncleanliness, the Bible permits Christians to eat pork when it later mentions that all foods are clean.

Pigs are condemned as unhygienic because they wallow in the mud and eat their own poop. But many do not know that pigs roll in the mud to thermoregulate their bodies as they do not have what we privileged have – Sweat glands!

And, when it comes to eating poop, pigs would just about eat any animals’ poop if they aren’t being fed properly. So is the way of nature; one has to do anything in order to survive.

11. One must strive for survival.

As we discussed before, pigs even eat poop if they lack food and nutrients. So, the pig’s emblem suggests humans live. After all, it is all about survival of the fittest.

While pigs are condemned for being greedy and overeating, they are simply trying to respond to their survival instincts. Therefore, the pig spirit animal tells you that we are lucky to be blessed with life, and we must do our best to live it to the fullest.

A study suggests that pigs have the cognitive capacity to grasp the concept of a video game. Pretty surprising, right?

If you are wondering what do pigs symbolize in literature, the answer is intelligence and valiance. Literature has portrayed pigs in characters completely different from the general notion that pigs are stupid, lazy, and greedy.

For instance, in the Dick King-Smith novel, Babe – The Gallant Pig, a piglet is portrayed as intelligent and understanding, as he learns to be a fantastic shepherd.

Likewise, in the world-renowned Winnie the Pooh, the piglet is depicted as a character who constantly pushes himself out of his comfort zone and faces his fears, suggesting pigs be brave. And, not to forget the famous tale of The Three Little Pigs, where the third pig ends up outsmarting a cunning fox.

Finally, pigs also urge us not to make snap judgments about anyone. Despite the notorious image of being unhygienic and stupid, pigs have time and again displayed their intelligence and reasons behind their so-called unclean behaviors.

In fact, pigs are one of the most intelligent domestic animals who are understanding enough to be trained successfully. They can learn their name pretty fast and can also be civilly trained to litter.

Therefore, a pig encounter warns us that misperceived judgments not backed up by facts are unfair and of no use.

‘What an arrogant swine! You’re such a pig!’ – It is quite saddening to see pigs being judged, humiliated, and loathed, isn’t it? In the spiritual realm, pigs make a fantastic spiritual guide.

If you have exciting pig encounters or dream scenarios that you’d like to dissect to share with us, we’d love to be a part of the process. You know where to leave a comment, don’t you? 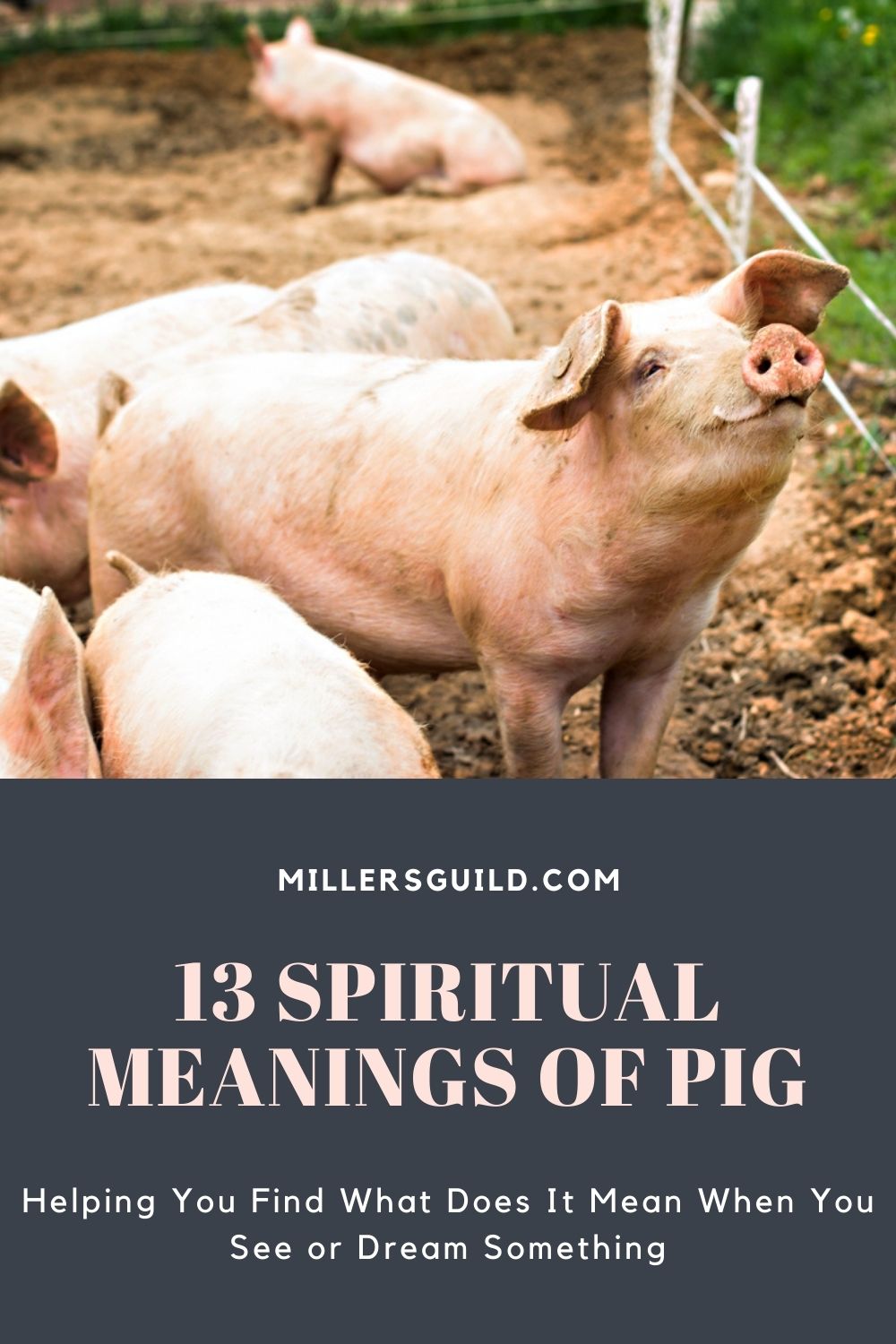