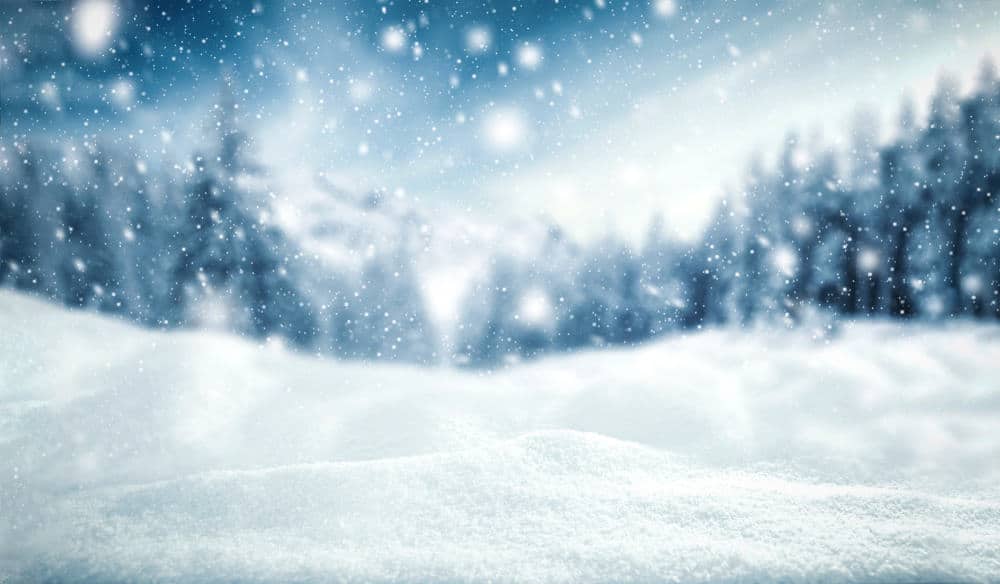 We have often witnessed how snow is romanticized in movies and literature, haven’t we? But is that the only spiritual meaning snow symbolizes? What does snow symbolize spiritually and in literature? If these are some of the questions roaming on your head, you’re at the right place!

In this post, we’ve put together 6 snow spiritual symbolism, 2 snow symbolism in movies and literature, followed by snow Celtic and Biblical meanings. Let’s get started! 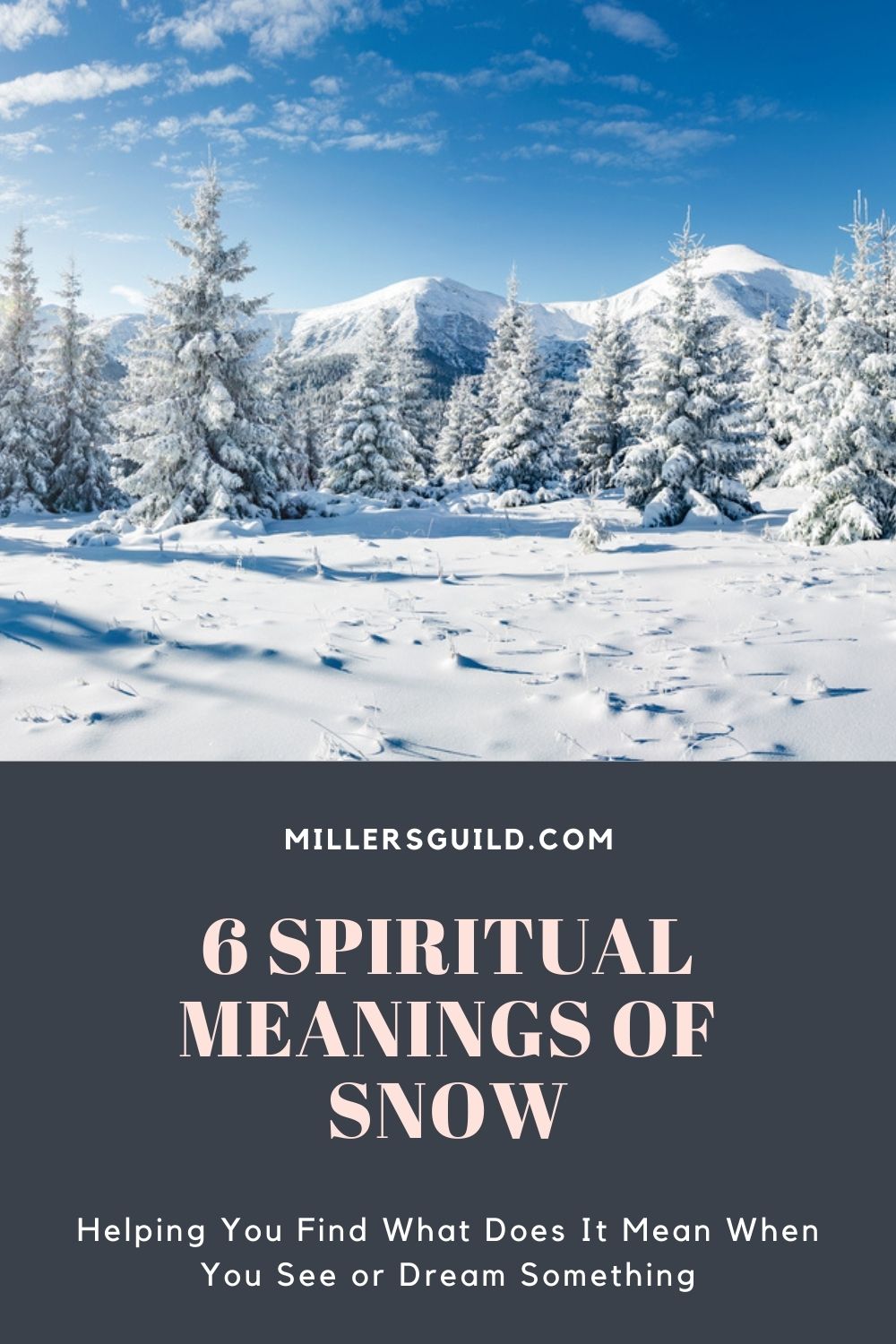 What Does Snow Symbolize?

Snow is the symbol of winter, the dark, cold, and dreary winter. During winter, nature goes into hibernation; animals hide in their homes, and the leaves in the trees die.

Just like death, winter doesn’t spare anyone; be them rich, poor, kind, or despicable. Therefore, winter and snow are also associated with death.

Rain is the purest form of natural water. And snowflakes being crystallized distilled water, i.e., they are just as pure as, if not purer, than rainwater. The white and delicate nature of snow is associated with innocence and purity.

Snow is also associated with negative, cold, and frozen emotions. It might be anger, desperation, jealousy, sadness, or any emotion that symbolizes the darkness and coldness within the person.

While is the emblem of peace and calmness. It is an incontestable fact that, though freezing cold, snow quietens the surrounding.

Given the thick snow, the wind loses its ability to play with grasses and branches. Everything is still, and snow whispers you to be cozy, relax and enjoy the peace you’re blessed with once in a while.

If you’re going through a conflicting period of your life, snow tells you to take action to mitigate the issues.

During snow, the surrounding is filled with a freezing blanket of snow. Everywhere you see a stunning brightness of the snow. People are full of joy, building snowmen and gathering their snow memories.

But what if the area was filled with pointy shards underneath, ready to stab you the second your feet touch them? The veneer of fluffy perfection as the result of a fresh snow blanket forces us to turn our blind eye to what’s deep inside.

The veil represents the façade we use to deceive those around us, manipulate them into liking us, and steer them as far away as possible from our hidden secrets. Snow can also represent how we turn our blind eye to smaller problems in our lives unless they become massive and hit us hard.

In contrast, snow is also associated with revealing secrets. It is believed that snow creates mysteries while helping us solve some enigmas at the same time. Even a dog’s footprint looks like that of a tiger’s in the snow. Everything, even clues to the truth, is amplified and crystal-clear in the snow.

Therefore, the spiritual meaning of snow is fun and youth. Yes, as we grow old, we realize the troubles and hindrances snow makes to our day-to-day work. Despite that, most of us still cherish snow, and our inner child somewhere inside of us still longs for it, doesn’t it?

2 Snow Symbolism in Movies and Literature

Snow and romance have become inseparable these days when it comes to movies. No wonder you will be bombarded with great lists when you search for ‘Romantic Christmas movies’.

South Korean romantic movies often mention that the couple who witness the first snow of the year together are meant-to-be and, thus, last lifelong. Thanks to all these hypes, Christmas, celebration, and romance is what come to our mind when we think of snow, don’t they?

Snow symbolism in literature is somewhat similar. For instance, take a look at Charles Dickens’s work A Christmas Carol, where snow is portrayed as a major symbol of Christmas.

In Edith Wharton’s book, Ethan Frame and The Dead by James Joyce, snow is associated with sadness and death.

In many epic movie scenes, you can witness how a character is shown peacefully lying dead in the snow. The filmmakers might have exploited the sharp contrast of pure white snow to the scarlet blood.

Moreover, such scenes of a dead body embraced in the coldness of winter and snow are certain to evoke intense empathy among the viewers.

The king of winter represented death, dark, and dreary days. Nevertheless, he wasn’t detested. Instead, Celts hang the leaves of the holly plant, one of the few plants that grow in the snow, in honor of their winter king.

Snow in Bible is mentioned multiple times in the context of describing something white. When the Lord mentions that the scarlet sins will be as white as snow, it suggests the Bible depicts snow as pure and devoid of sins and also relates it to forgiveness.

Snow is also depicted as a medium of refreshment as the snow-fed mountains are associated with a refreshed life. Among Christians, snow is an omen of merriment and positive changes.

Common Snow Dreams and Their Interpretations:

1.   Dreaming about others in snow:

If you dreamt of your acquaintance in snow, it is a sign that you have pent-up cold feelings towards this person. You’re probably upset with their actions, or you don’t like the person at all.

You might be displaying passive-aggressive behavior towards this person. If there’s something you’d like the person to work on, it would be better to communicate and clear out the air instead of harboring negative energy in your heart.

Dreams about melting snow forewarn you to pay attention to smaller troubles of your life. Running away from facing conflicting issues in your waking life is probably not a good idea, as such issues might end up inviting many unwanted problems later on.

Melting snow also represents forgiveness and reconciliation. If you had a long-term feud with somebody or weren’t on talking terms with one of your dear ones, this dream is a positive omen that everything will go back to normal again.

3.   Dreaming about playing in snow:

Playing in the snow in the dream has a lot to do with your inner child. Lately, you are finding happiness in the simplest of things in life. This dream reminds you to let go of all the physical-world burden and pamper your inner child every once in a while.

4.   Dreaming about slipping in snow:

If you dreamt of slipping in the snow, be wary of negative and conflicting issues around you. This dream is a sign of you encountering troubles and hardships in your work life or personal life. You’re probably discontent and disappointed with the series of happenings in your waking life.

Likewise, this dream also represents lost chances, the opportunities you were too lazy, demotivated, or naive to grab.

Dirty snow in the dream represents the injustices and toxicity you have dealt with in your waking life. People around you aren’t as trustworthy and genuine as you think. They are simply trying to take advantage of your kindness. So, this dream is a forewarning to be wary of the people surrounding you.

6.   Dreaming about fluffy and clean snow:

While fluffy and fresh clear snow is a dream to look at in waking life, the actual dreams aren’t a good omen. This dream portends sadness, grief, and illness. It further forewarns relationship issues and represents your discontentment in your personal life.

On a positive note, in some cultures, pure white clean snow is associated with purity, innocence, and spiritual awakening.

7.   Dreaming about a blizzard:

Just as in a blizzard, where you feel lonely, confused, and chaotic, your life is probably treating you the same way lately. You’re going through emotional turmoils and issues in your personal or professional life. You’re unaware and confused regarding what step you should take next.

If you dreamt of yourself struggling in the blizzard, you are trying your best to get yourself out of the messes that your life has been throwing at you lately.

Nevertheless, we’d recommend you talk to a trustworthy friend or a counselor regarding your hardships to take some burden off your chest.

If you had a snow dream recently or in case you were simply curious about what snow means spiritually, religiously, and in movies, we hope this post was able to help you.

Do you have any more queries regarding snow? You might be interested in knowing what snow symbolizes in Hinduism or in Islam? If yes, let us know in the comments; we’d love to chat with you! 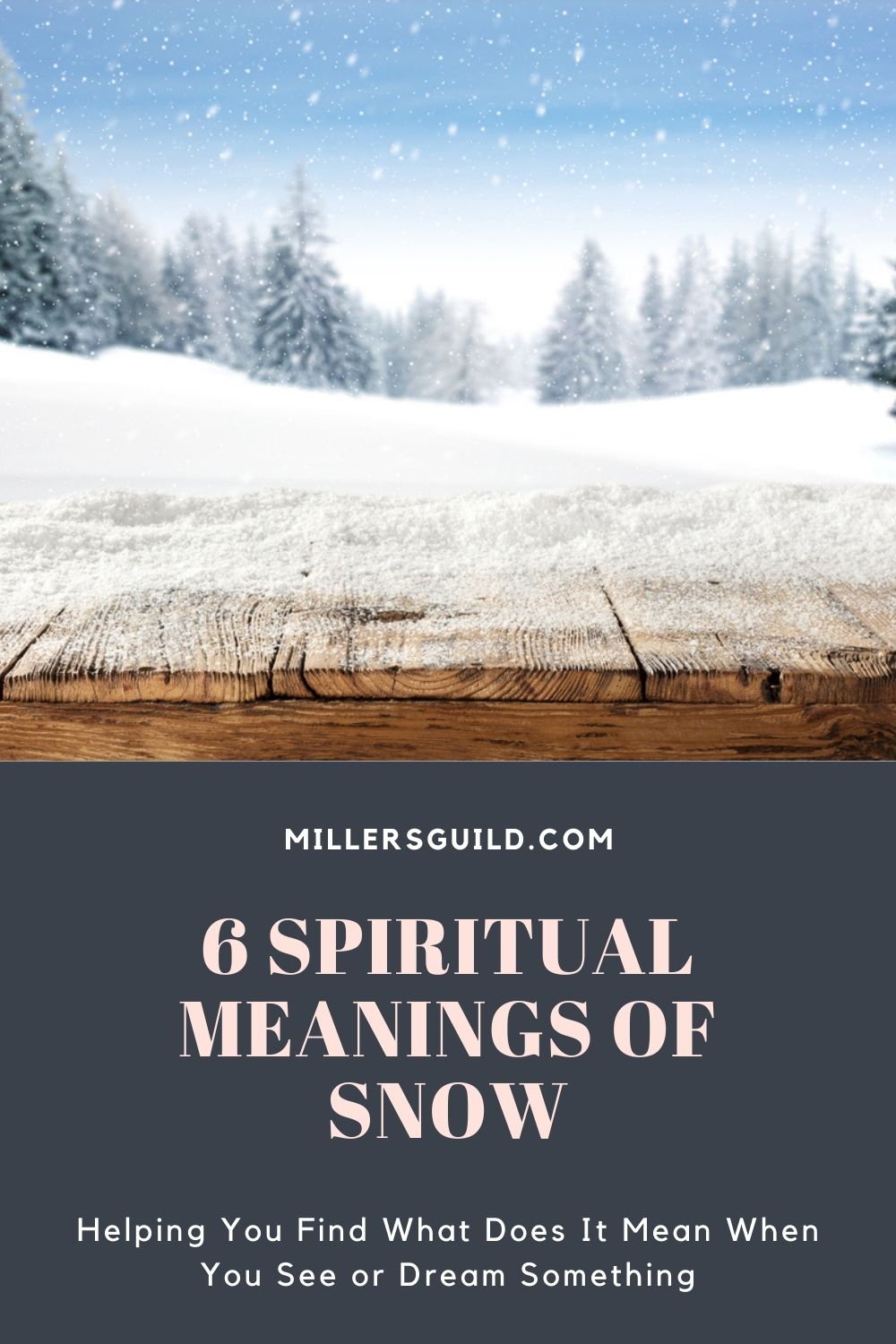