Skip to content
Miller's Dream & Symbolism » What Do the Stars Mean? (Spiritual Meanings) 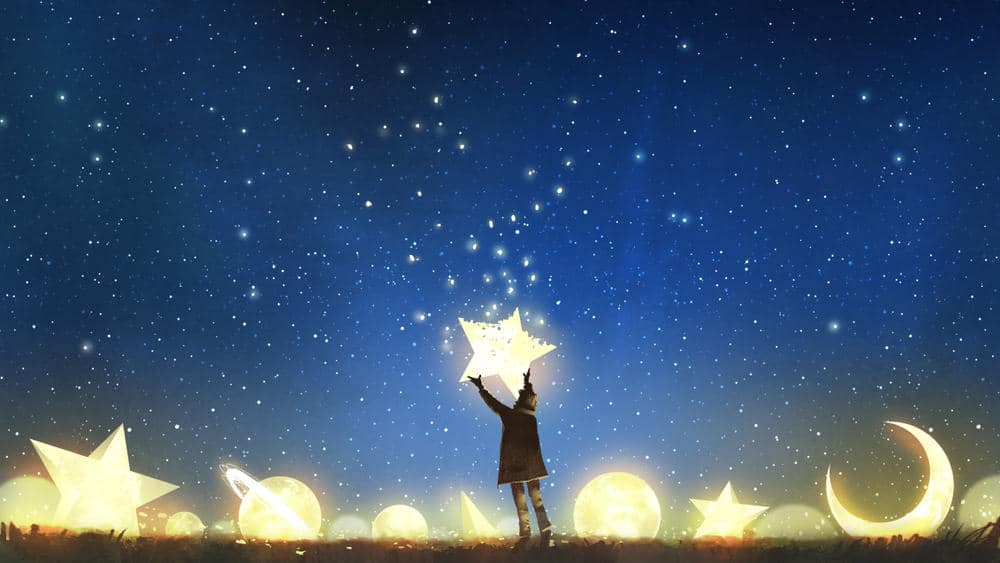 The sight of a star-filled sky is enough to fill most of us with wonder. The silvery light shining down from incalculable distances gives us a sense of our own place in the universe. And it can help remind us that today’s troubles are just a raindrop in the vast ocean of time.

Sometimes it can feel as if the stars themselves are trying to send us a message. So just what is the spiritual meaning of stars?

We’re going to attempt to answer that question. We’ll look at the way the stars have been used as spiritual guides by different cultures. And we’ll look at the symbolism of stars across different religions and belief systems.

So if you’re ready to find out more, let’s get started! 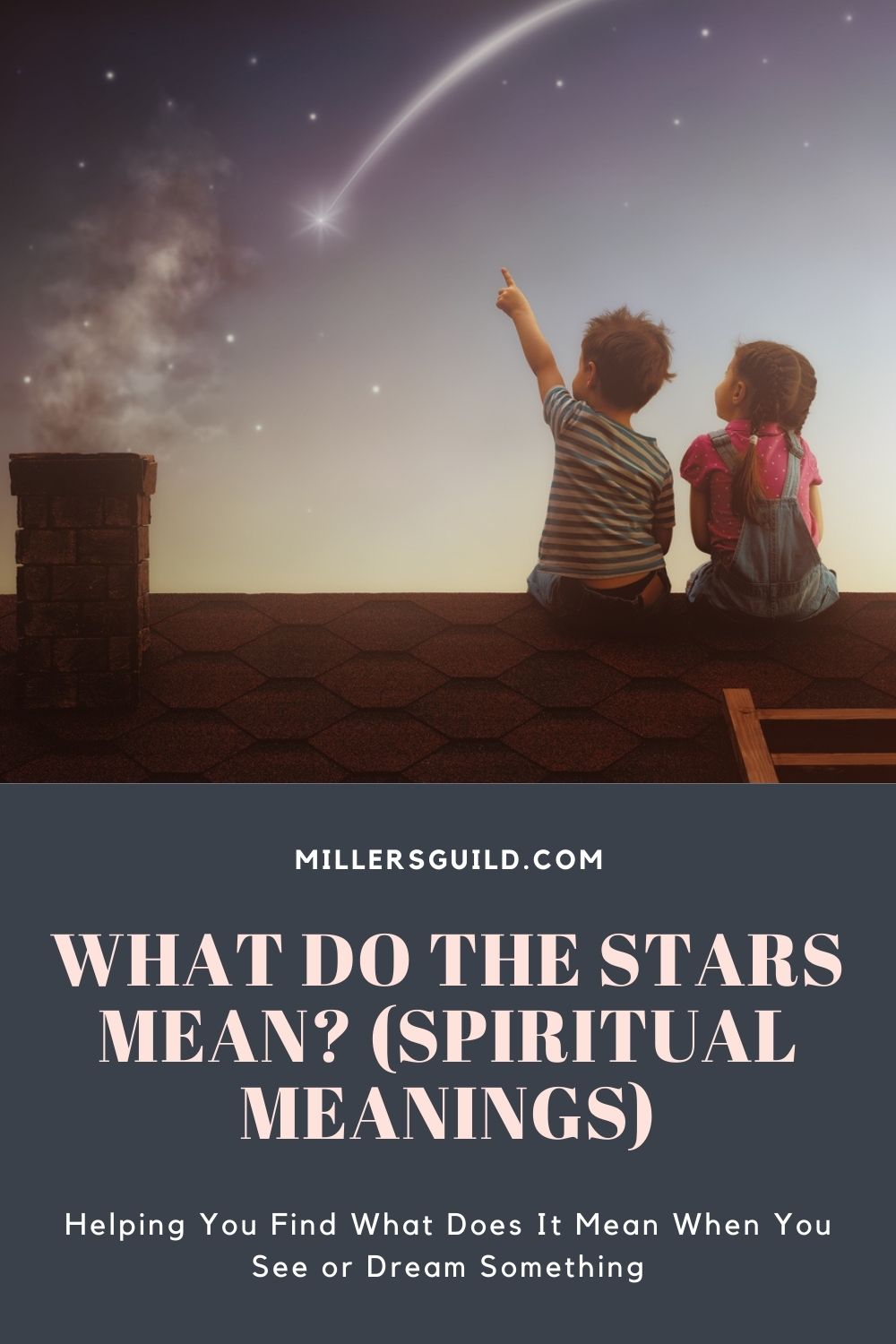 Stars as Guides to the Future

One of the oldest associations with stars is as a guide to the future – in other words, astrology. Depending on which day of the year we’re born, we each have our own astrological sign, more commonly known as our star sign.

If you’re born between September 23 and October 23, for example, your star sign is Libra. That’s an air sign, and it is associated with balance and stability.

Those born between March 21 and April 19 fall under the sign of Aries. That’s a fire sign, and Arians are believed to be dynamic, passionate, and natural leaders.

Followers of astrology believe that the natural movement of the stars affect aspects of everyday life. As such, it can be used to predict the future. Those predictions are known as horoscopes, and they cover everything from relationships to work life, to the success of new ventures.

Horoscopes are published regularly in magazines and newspapers. In most cases, they consist of no more than a couple of sentences.

But more dedicated followers of astrology may have their own astrological chart drawn up. This takes into account the precise time and location of their birth. And some believe that it can predict all the key events of their lives.

The Symbolism of Constellations

It’s not just individual stars that may have meaning. Sometimes stars group together in recognizable patterns, which we know as constellations. Some of these – the Big Dipper or Plough, The
Great Bear or Ursa major, and Orion the Hunter are known across the world.

But the way the stars appear in the night sky differs according to where you are on the planet. And in some cases, particular cultures have their own names for specific groups of stars.

South Pacific Islanders, for example, see a number of constellations which are only partly visible in the northern hemisphere. These have their own names.

Maoris, for example, have the Matariki, or Eyes of God. In Hawaii, you can see the Ka Makau Nui o Māui, or the Big Fishhook. In the Philippines, you may spot the Moroporo, the Boiling Lights. And in Tonga, there’s the Ha’amonga, or the Sun Gate.

These different constellations are associated with their own myths and legends.

Most of the constellations named after characters in Greek myths were heroes or animals who carried out great feats. They were rewarded by the gods by being given their own place in the stars.

Stars are also afforded an important place in many world religions.

For Christians, the birth of Jesus was heralded by the arrival of a bright new star in the night sky. It was this star that led the shepherds and Wise Men to the baby Jesus.

The star also appears in other contexts. Among the honorifics given by Roman Catholics to the Virgin Mary is “Star of the Sea”. This signifies her role in leading the faithful towards Christ.

But the star is also associated with Lucifer. The legend has it that he was a fallen angel, the light of a star tracing his descent into Hell. He is also known as the Morning Star, a light that is beautiful but quickly disappears.

Judaism takes as its symbol the six-pointed Star of David. Among its meanings is the creation of the world. The six points represent the six days in which the world was made. The central section signifies God’s day of rest.

Texts about astrology are also found in the Vedas, the holy scriptures of Hinduism.

Like western astrology, Hindu astrology has 12 signs. It also divides the sky into seven houses, known as nakshatras. And nine celestial bodies, known as the Navagraha, are believed to govern human affairs.

Stars also feature in Islam. There are 13 references to stars in the Qur’an, most of which refer to them as guiding lights. And the crescent moon and star were chosen as the emblem of the Ottoman empire.

Wiccans use the pentagram, a five-pointed star inside a circle, as a symbol of their faith.

Shooting stars are a beautiful and somewhat unusual sight. But when it comes to ascribing a meaning to them, different cultures have different approaches.

But in other cultures, the opposite is true. Shooting stars are seen as demons falling from heaven. That makes them bad news, and it’s particularly bad luck to point at them.

Shooting stars are also thought to have a specific meaning in dreams. We’ll take a look later at what that is.

With so much meaning ascribed to stars, it’s not surprising that they are often used as symbols. We’ve already discussed the star and moon as a symbol of the Ottoman Empire. That combination also appears in the flags of many Islamic countries, including Turkey, Pakistan, Brunei and Algeria.

But stars appear on the flags of many other countries too. The flag of the USA is famously referred to as “the stars and stripes”. Here, each of the 50 stars represents a state.

Other flags featuring stars include Djibouti, Burundi, the Netherlands, the Cook Islands, Cuba, Panama and North Korea. In all, around 70 independent states have a flag that includes at least one star.

Symbolic representations of stars take many forms and have many different meanings.

A five-pointed star where each line is the same length is known as a pentagram.

As well as being used as a symbol of faith by Wiccans, it has various occult meanings. In the tarot, it appears inside a circle as a “pentacle”. Pentacles are one of the four suits of the minor arcana, and these cards usually relate to financial matters.

In the nineteenth century, occultists believed that the orientation of the pentagram determined its meaning.

It’s for that reason that the pentagram facing upwards is used as a symbol of Wicca. The downwards pentagram is associated with Satanism. The two upwards points can also be seen as the horns of the devil, the downwards point as his beard.

We’ve already looked at the six-pointed Star of David and the five-pointed pentagram. But star symbols are depicted in other ways too, and each has a distinctive meaning.

A four-pointed star is usually used to represent the Star of Bethlehem. It’s often depicted in the form of a cross.

A star with seven points is associated with an archangel known as Anael. It’s also a sign of radiance.

The eight-pointed star is a symbol of the Hindu goddess Lakshmi. Each of its points represents a different type of wealth. These are patience, victory, wisdom, health, prosperity, nourishment, mobility and material riches.

In ancient Greece, a nine-pointed star was used to represent the nine Muses. Each Muse was an inspiration for a form of the arts.

Calliope was the Muse of epic poetry, Euterpe the Muse of music, Clio of history and Erato of lyrics. The remaining Muses covered dancing, tragedy, sacred poetry, comedy and astronomy, then considered an art.

The ten-pointed star is sometimes used as a symbol for the Tree of Life in the Kabbalah.

It’s also associated with Christianity, with each of the ten points representing a disciple who remained loyal to Jesus. (Judas betrayed Him for 30 pieces of silver, while Peter denied all knowledge of Him three times before the cock crowed.)

Some people believe that dreams can send us spiritual messages. If you’ve dreamt of a star, it could have a particular meaning.

In Chinese astrology, star dreams are usually associated with friendship. Its bright light represents someone close to you, to whom you can turn for guidance and support.

Other interpretations link dreams of stars to good luck and material gain. A sky full of stars is believed to mean that there are lots of different opportunities ahead. It may take time and careful thought to choose the right one.

Shooting stars in dreams are generally linked to some kind of metaphorical fall from grace. That usually applies to someone the dreamer sees as being in a position of authority. That could be a boss at work, a teacher, or an esteemed family member.

Other interpretations see stars as representing goals you’re trying to achieve. They may feel unattainable, too far away to reach.

But dreams of this kind may also connect to the association of stars with destiny. They may reflect your decision to leave the outcome of a situation to Fate.

If you’ve dreamt of a star, try asking yourself what you associate with stars. What feelings did the star evoke in you? These will be the best clues as to how your unconscious mind is using the star as a symbol.

We’ve already seen that stars have a rich symbology, whether in spiritual teachings, belief systems or even everyday emblems.

In ancient times, stars were often used to navigate, particularly by sailors at sea. That association persists today, with stars often seen as providing guidance.

The Victorians saw stars as rich in meaning, and they were a common motif in jewelry of the time. They were seen as symbolic of wisdom and guidance, and starburst brooches and pendants were very popular. These were often adorned with diamonds, pearls or paste stones.

Stars are also often used as marks of success. Children are awarded “gold stars” for good work, whilst we refer to successful celebrities as “stars”.

This symbolism has reached into our everyday language. We talk about “reaching for the stars” to mean aiming for ambitious goals.

And the link between stars and destiny is also reflected in different sayings. We talk about something that is destined to happen as being “written in the stars”. And we refer to “star crossed lovers” as those whom Fate has denied the chance to be together.

We’ve already talked about the suit of pentacles in tarot. But the major arcana also features a card called “The Star”.

In the Rider Waite tarot deck, the card is illustrated with a naked woman beneath a starry sky. In one hand she holds a jug, from which she is pouring water into a pool. In the other hand, she pours water from a jug onto the land.

When it appears in a tarot spread the right way up (known as “dignified”) the Star represents hope, faith and strength. If it appears upside down (“ill-dignified”) it refers to feelings of hopelessness and a loss of confidence.

The Many Meanings of Stars

That brings us to the end of our look at the different spiritual meanings of stars. Whether seen as guides to the future, links to the divine or emblems of hope, stars are rich in meaning.

These balls of flaming gas have been represented in many different forms. Some stars are depicted with four points, others with as many as ten. But all carry their own distinctive message.

We hope you’ve enjoyed learning more about them! 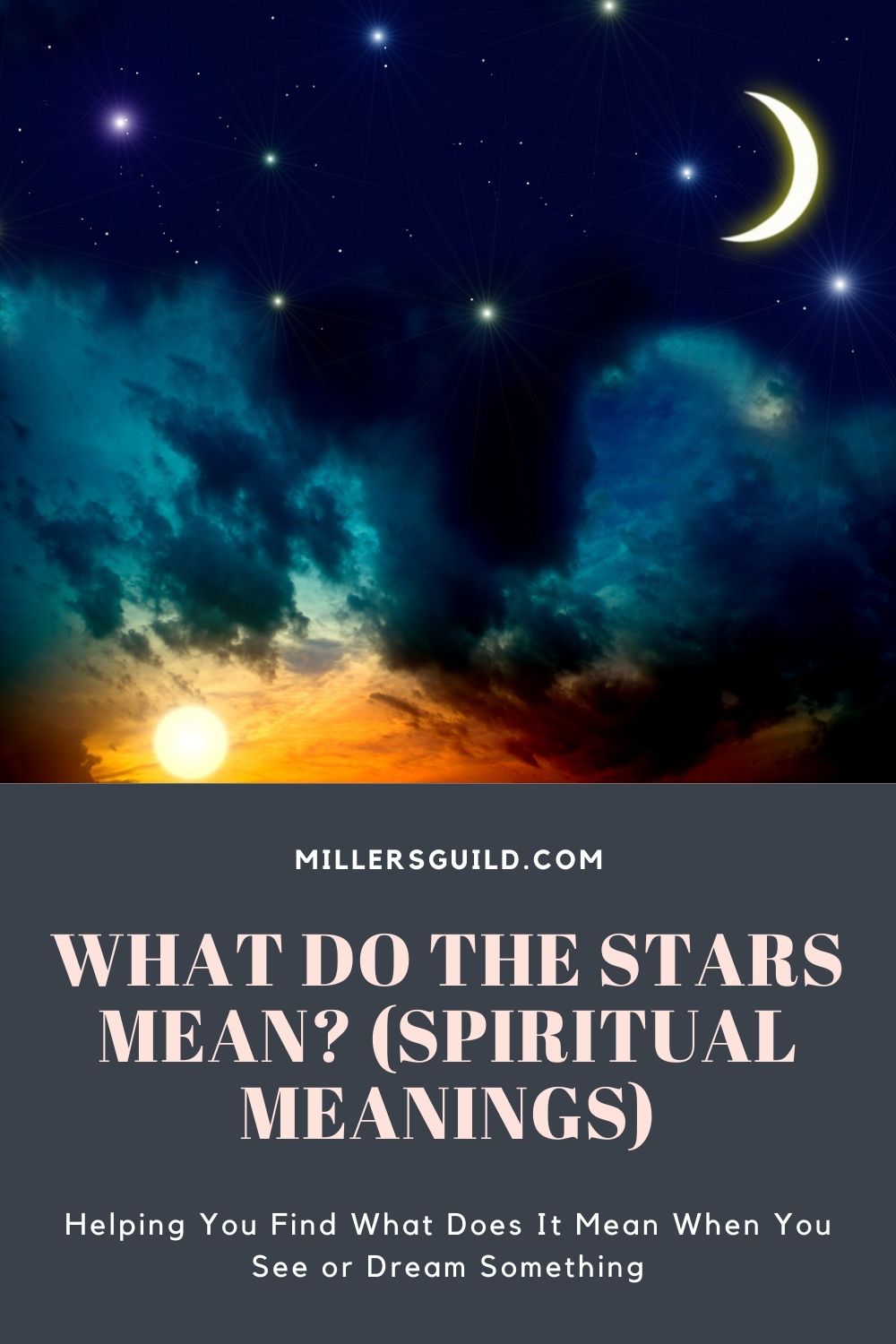