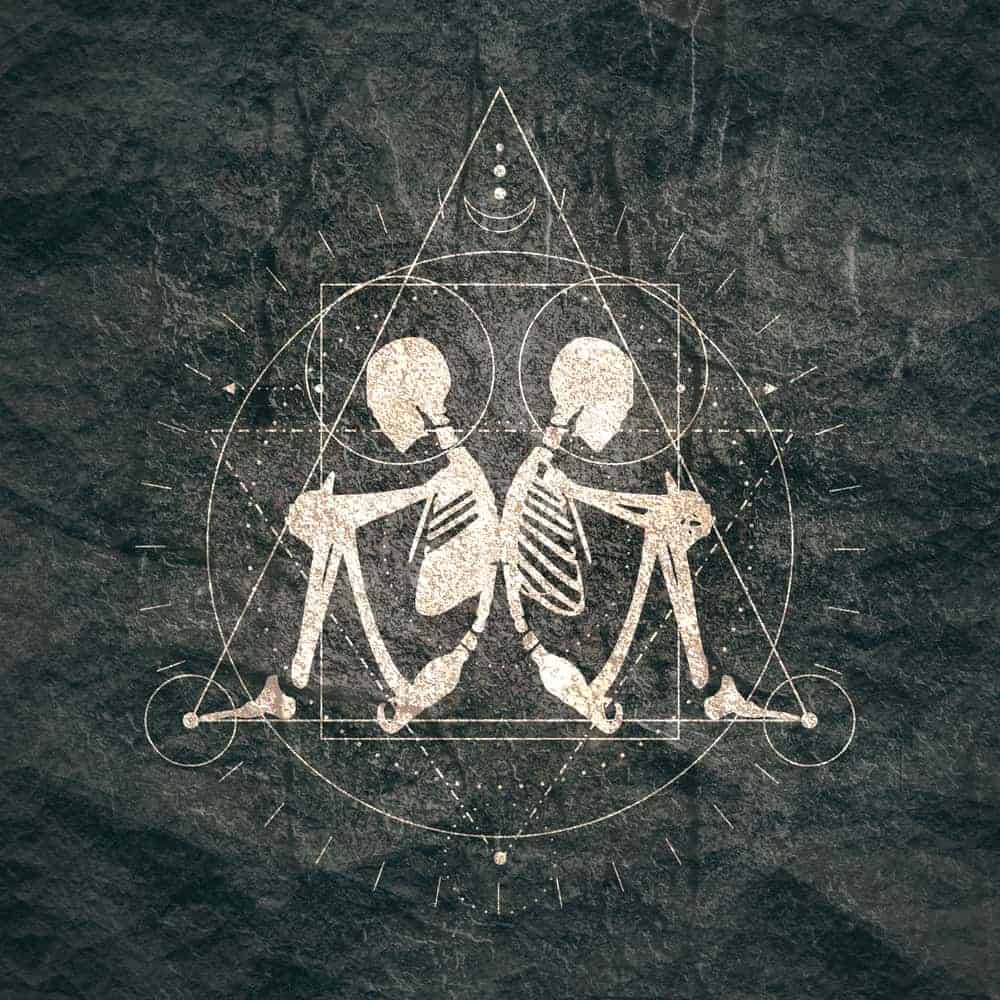 In the world of symbolism, the triangle is among the most significant of all shapes. Just by looking at a triangle, you can feel the inherent power of its form, and unsurprisingly, it has had many meanings to various cultures around the world down the ages.

Even today, the triangle is an important symbol that can be found everywhere, from road signs to banknotes. So for anyone who wants to know more about this potent image, in this post, we discuss triangle symbolism and what triangles can mean to different people. 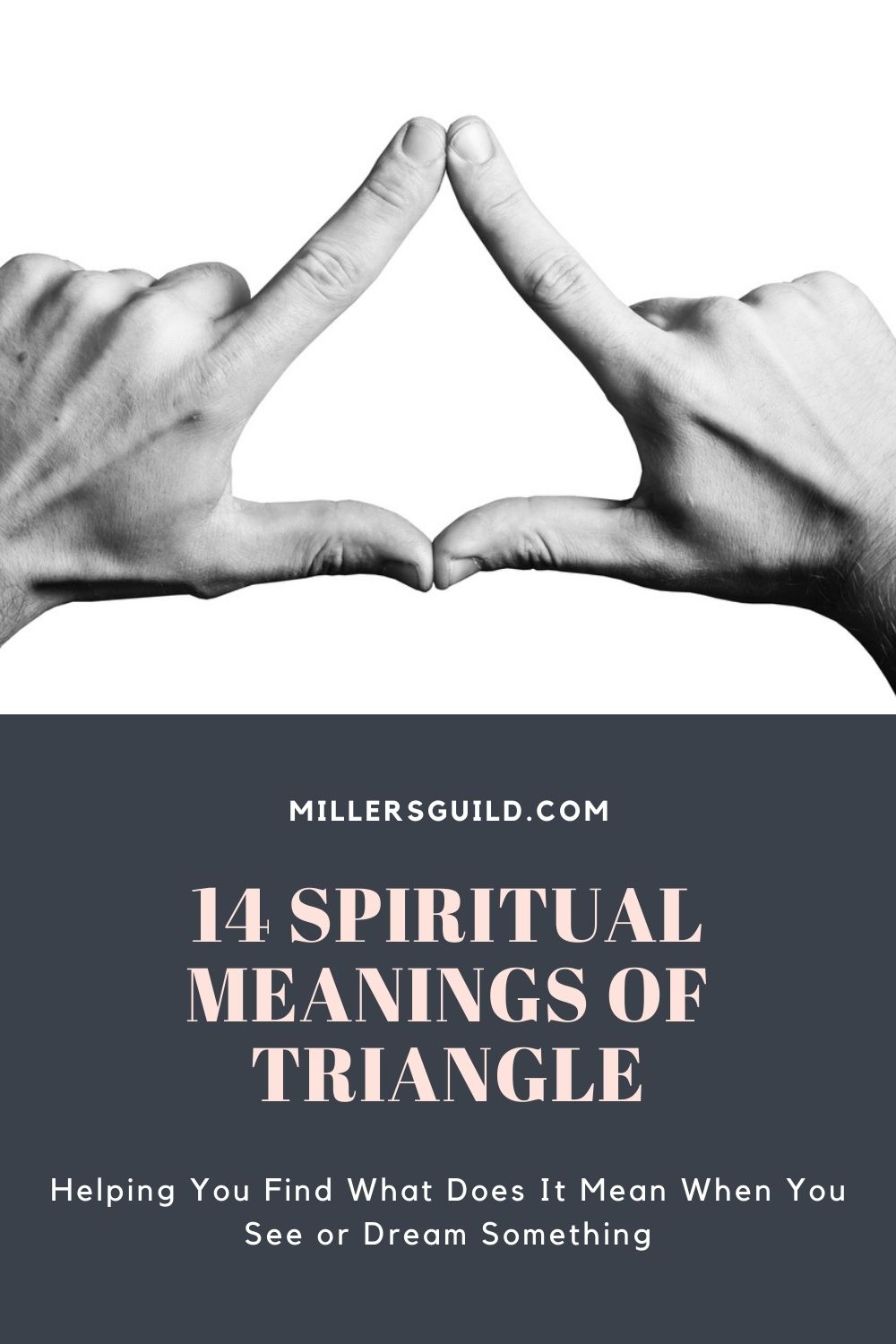 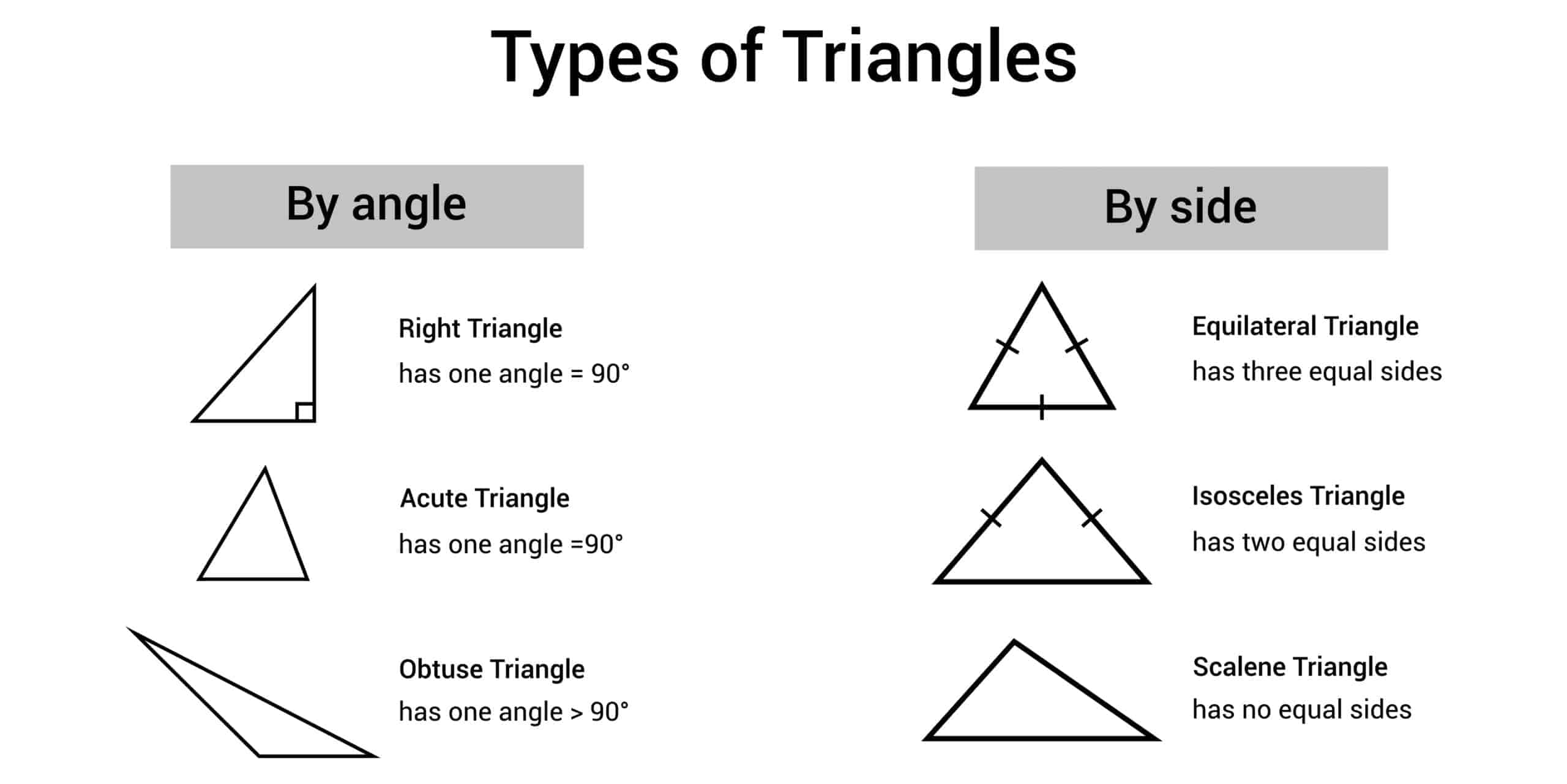 Before we talk about the meaning of triangles, we need to take a step back and remind ourselves of some basic geometry – since there are several different types of triangles, and the symbolism can vary, depending on which type appears.

Triangles can be classified according to one of two features – their internal angles or the lengths of their sides.

A triangle with two sides of the same length is called an isosceles triangle, and one with sides of three differing lengths is called a scalene triangle.

These kinds of more irregularly shaped triangles are less commonly use as symbols since they don’t have the same power as equilateral triangles or isosceles triangles.

Triangles and the number three

The main feature that makes triangles so important and meaningful is the fact that they have three points – the word “triangle” means “three angles” – and the number three is considered to be one of the most significant of all numbers.

Three is considered a perfect number, and instances of trinities occur countless times around the world in different contexts.

One of the most famous trinities is the Christian Holy Trinity of the Father, the Son and the Holy Spirit – but many others exist.

In life, we go through three main phases, birth, life and death – and life itself can also be divided into childhood, middle age and old age.

So in short, the number three is found everywhere, so many times that it cannot be just a coincidence – and the triangle is the symbol that represents this important number.

Different meanings of the triangle Symbol

As we have seen, the triangle is an important shape loaded with symbolism and represents the number three, which is also one of the most significant numbers – so now let’s look at the symbolism of triangles in more depth.

As we’ve already mentioned, one of the most famous trinities is the Holy Trinity of the Father, the Son and the Holy Spirit in Christian beliefs.

This represents the triadic understanding of God as being three divine persons that exist at the same time, that share the same essence and are all God – but are not the same being.

As an aside, it is interesting to note that in the story of Jesus’ birth, the baby is visited by the Three Wise Men. Again, we see the appearance of the number three, which is surely no coincidence.

2. The Eye of Providence

The Eye of Providence, or the All-Seeing Eye, is another triangle symbol that is associated with Christianity. It is depicted as a triangle with an eye inside and represents divine providence – or God keeping watch over humanity.

It has been used in Christian art to depict the Holy Trinity since Renaissance times and reminds believers that God constantly maintains the natural order of the universe.

This symbol is also famously found on the Great Seal of the United States, appearing on the reverse side of the one-dollar bill.

Some people believe that this symbol also secretly indicates the role of Freemasons in the creation of the United States. However, this image was only adopted by Freemasons some years after the Great Seal was created, so this conspiracy theory is unlikely to be true.

In Hinduism, the Anja chakra – also known as the Third Eye – sits in your forehead between your eyes and is represented by a triangle.

In ancient beliefs, the whole world was thought to be made of four basic elements, air, earth, fire and water – and each is represented by a triangle.

Aether, the so-called fifth element also known as quintessence, was thought to be what filled the universe beyond the earthly realm. This mysterious and magical element is represented by triangles superimposed on one another, forming a star.

The capital version of the Greek letter delta is written as a triangle like this: Δ.

Part of the reason the triangle is such a powerful symbol is that it represents harmony and balance. When the three sides are balanced, as in an equilateral triangle, this creates the conditions necessary for change or evolution to take place.

When this happens, the triangle can also be seen as symbolizing a door, and the door in turn symbolizes the opening up of new opportunities.

In Hindu belief, as well as in the beliefs of other religions from India such as Buddhism and Jainism, yantras are geometric designs that can be used for worship or as an aid to meditation.

In a sense, yantras serve a similar purpose to mantras but are visual rather than spoken.

Many yantras contain triangle symbols, and the way they are designed connects them to a certain god.

Some people believe that by hanging up the yantra of a god, you can obtain the kind of energy that god embodies.

So for example, to attract either spiritual or material wealth and prosperity, you should hang a Lakshmi yantra whereas a Kali yantra will bring you strength and courage during transitions.

In Buddhism, the triangle represents Trikaya, the three bodies or modes of a Buddha. They are the body of essence, the body of enjoyment and the body of transformation.

Triangles are also commonly found incorporated into Buddhist temples due to the association of the triangle with the number three, which is seen as being lucky and auspicious.

8. Ancient Egypt – a symbol of protection

When we think of triangles, we must remember some of the largest triangles that have ever existed, those making up the sides of the Pyramids in Egypt.

Although the pyramidal shape was adapted partly for practical reasons since the distribution of weight in a pyramid allowed ancient civilizations to construct great monumental architecture, the shape also has a symbolic meaning.

The Pyramids were built as tombs for pharaohs, with the large base in contact with the ground and the tip of the structure pointing towards the sky and the sun.

This can be seen as representing an ending for the physical body but a new beginning for the spirit as it could rise up into the sky to be closer to Ra, the god of the sun.

In modern spiritual practices, pyramids are also thought to have special healing powers, and sleeping below a pyramid is believed to optimize the energies in your body.

In Chinese feng shui, the triangle represents upward or forward motion and is the contrary of grounding energy, which means it is not a suitable symbol to have in most places in a house.

In your home, you usually want to create harmony with grounding or stabilizing influences, and the triangle is the opposite of this.

However, triangles are appropriate in places where upward and forward energy is desirable such as in a home office or a gym since the energy of manifestation they bring can help you achieve more when working or working out.

Triangles can represent both the male and the female, depending on which way they are drawn.

A triangle with the point at the bottom is a female symbol that represents feminine energies. This means it is associated with intuition and passive, receiving energy.

On the other hand, a triangle with the point at the top is a male symbol that represents masculine energies. This symbol is associated with decisiveness and taking action.

They may sometimes be depicted with other triangles inside the main triangle, representing the extended family, other members of the tribe and a sense of belonging.

The valknut is a symbol consisting of three interlocking triangles that was used by various ancient Germanic peoples. For example, it is known from an Anglo-Saxon ring from the 8th or 9th century as well as from Viking Age ship burials.

The meaning of the symbol has not been definitively proved, but many think it is related to the Norse god Odin.

Odin had the power to bind or unbind, which could be used to cause men to become paralyzed in battle or to inspire them to great feats of valor, and the valknut may have symbolized this power.

Alternatively, it may have been related to death and funerary practices.

A modern use of the triangle is as a warning sign, and it is the common shape used to indicate danger. For example, road signs telling of danger ahead are often triangular, so this shape has come to be associated with the need to be careful and pay attention.

Another association of this shape is with a “love triangle”, so they can represent betrayal and being unfaithful.

This shape may sometimes occur in your dreams, and if it does, it could be a message that you need to be on your guard since something in your love life might not be as you imagine.

A powerful symbol with many meanings

Triangles don’t appear very often in nature, but the power of this symbol has fascinated people since time immemorial.

Triangles represent balance, harmony and equilibrium, and they are also closely associated with the number three, which many see as the perfect number.

Triangles are versatile symbols that can represent the masculine as well as the feminine, and although you shouldn’t place them in all parts of your home, they represent forward energy and also feature on many yantras, so triangles can help bring positive energy into your life. 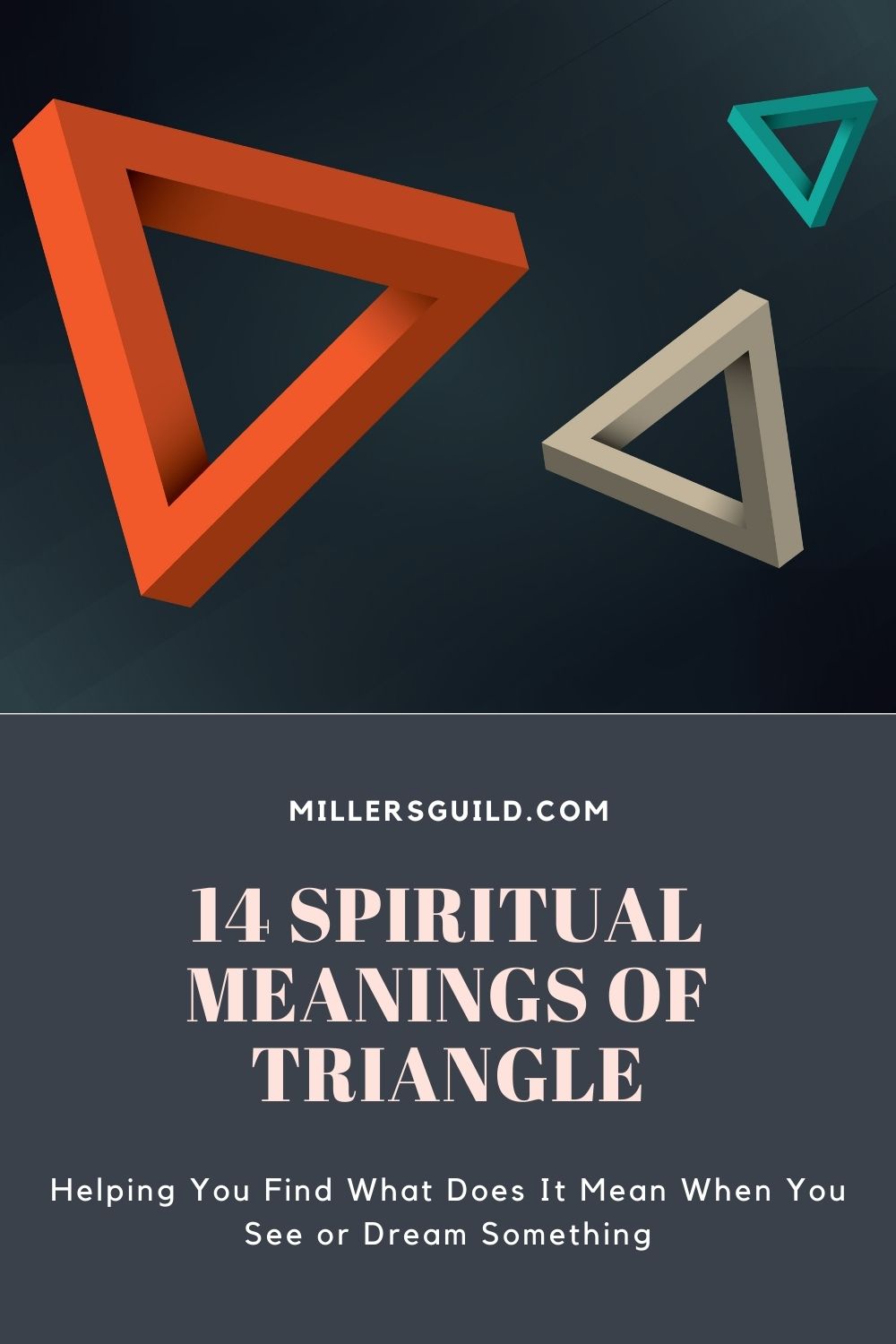