Skip to content
Miller's Dream & Symbolism » What Does a Unicorn Symbolize? (Spiritual Meanings) 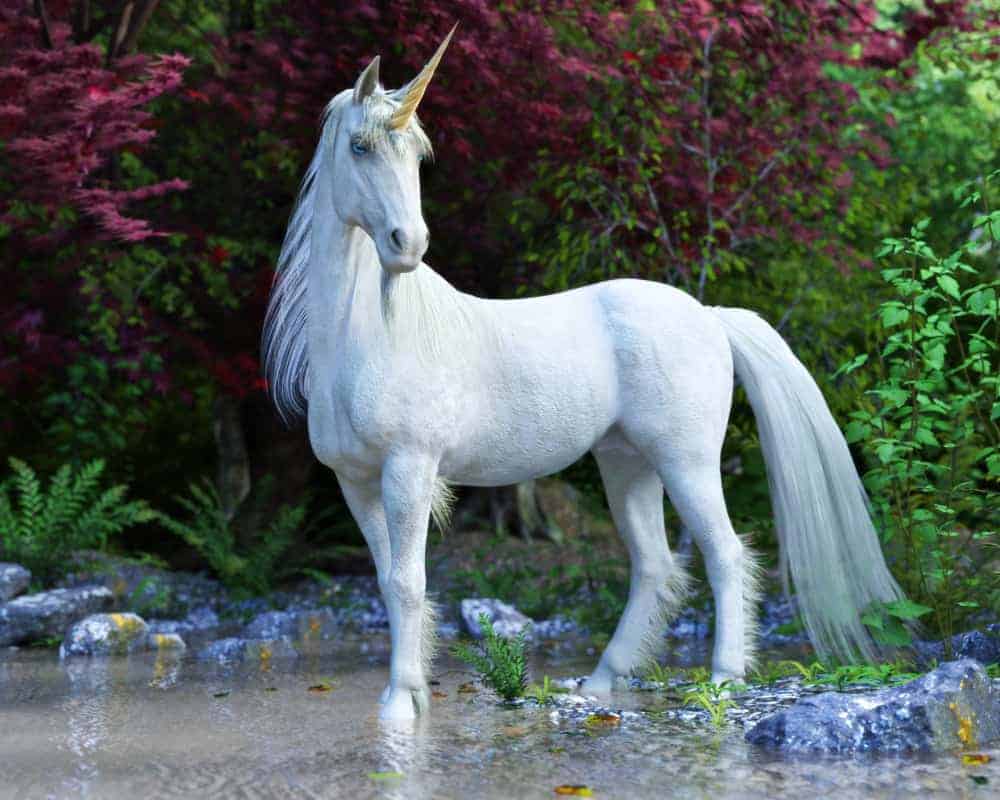 The unicorn is one of the most memorable of all mythological creatures. Elegant and beautiful, it has featured in ancient myths and fairy tales for centuries. But what does the unicorn symbolize?

That’s what we’re here to find out. We’re going to explore references to unicorns from the ancient world right up to the present day. And we’ll find out why they have such a special and enduring place in our hearts.

So if you’re ready to find out more, let’s get started … 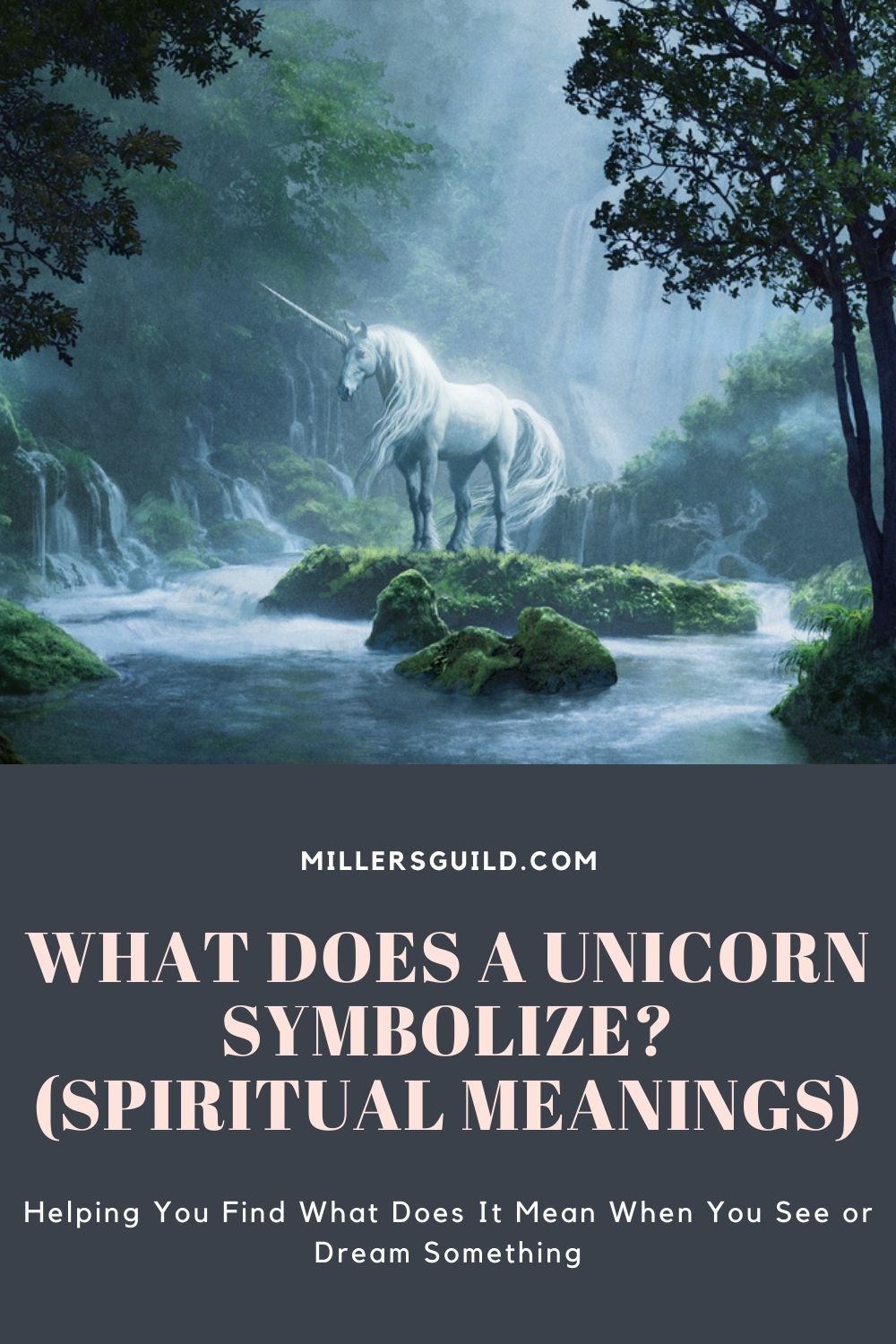 what do unicorns represent?

The earliest references to unicorns come from the east, around 2,700 BC.

The unicorn was believed to be a magical animal. It was very powerful, wise and gentle, never engaging in battle. Ancient Chinese legends say it was so light on its feet that it didn’t crush a single blade of grass when it walked.

It was believed to be very rare, and to prefer living in solitude. And as in later myths, it was reputedly impossible to capture. Its uncommon sightings were taken as signs that a wise and just ruler was on the throne.

Legend has it that the last person to see a unicorn was the philosopher Confucius. The creature described in those accounts has a single horn on its head. But in other respects, it appears quite different from later depictions.

The unicorn seen by Confucius had the body of a deer and the tail of an ox. Some accounts describe it as having skin covered in scales. Others, however, talk about a multicolored coat of black, blue, red, yellow and white. And the horn of the Asian unicorn was covered in flesh.

Another version of the unicorn appeared a little later. The Indus Valley Civilization lived in the Bronze Age in the northern part of the Indian subcontinent.

Soapstone seals and terracotta models dating to around 2,000 BC show the image of an animal with a single horn. The body in this case looks more like that of a cow than the horse of later unicorn illustrations.

This appears to be a stand of some kind, with two different levels. The lower is semi-circular, while above it is a square. The square is inscribed with lines that divide it into numerous smaller squares.

At first sight, the object could be taken for a boat seen head-on. No-one has yet worked out what it is. The various theories include a stand for ritual offerings, a manger, or an incense burner.

The Indus Valley seals represent the last sighting of the unicorn in South Asian art. But who knows whether the myths of a one-horned animal informed later theories about unicorns?

The Unicorn in Ancient Greece

The ancient Greeks saw the unicorn not as a mythical creature but a real, live member of the animal kingdom.

Their first written reference to unicorns came in the works of Ctesias. He was a royal physician and historian who lived in the 5th century BC.

His book, Indica, described the far-off country of India, including the claim that unicorns lived there. He sourced his information from his travels to Persia.

Persia’s capital at the time was Persepolis, and images of unicorns have been found carved into monuments there. Perhaps the ancient myths of the Indus Valley somehow contributed to the reports of unicorns.

Ctesias described the creatures as a kind of wild ass, fleet footed and with a single horn.

That horn would have been quite a sight! Ctesias said it was a cubit and a half long, about 28 inches long. And rather than the pure white or gold of modern illustrations, it was believed to be red, black and white.

In what was probably good news for unicorns, their meat was also considered unpalatable.

Later Greek descriptions of unicorns refer to their temperament. This too is quite different from the gentle and benevolent creature with which we’re familiar.

Pliny the Elder referred to a creature with a single black horn, which he called a “monoceros”. This had the body of a horse, but the feet of an elephant and the tail of a boar. And it was “very fierce”.

Several other writers of around this time cataloged the animals they believed roamed the earth. Many of these works included the unicorn, which was often said to battle elephants and lions.

In later times, the unicorn began to assume a gentler aspect. European myths from the Middle Ages refer to unicorns as pure animals that could not be captured by men. The unicorn would only approach a virgin maiden, and would lay its head in her lap.

In this way, unicorns were associated with Christ, lying in the arms of the Virgin Mary. The unicorn was a spiritual creature, something almost too good for this world.

Early Bibles included references to unicorns as the translation of the Hebrew word re’em. The creature signified power and strength. Later scholars, however, believed that the more likely translation was the auroch, an ox-like creature.

Unicorns also featured in the Renaissance period in images of courtly love. French authors of the 13th century frequently compared the attraction of a maiden to a knight to the attraction of a unicorn to a virgin. This was a high-minded, pure love, far removed from lustful urges.

Later depictions saw the unicorn associated with chaste love and faithfulness in marriage.

The very different descriptions of unicorns suggest that different animals were mistakenly given the name. We’ve already seen that the “unicorns” of early Bible translations were more likely aurochs.

But there seem to be plenty of other cases of mistaken identity. Around 1300 AD, Marco Polo was horrified by his sightings of what he took to be unicorns. During his travels to Indonesia, he came upon a one-horned creature quite different from what he expected.

This animal, he said, was “ugly and brutish”. It spent its time “wallowing in mud and slime”. Disillusioned, he remarked that the creatures were nothing like they were described “when we relate that they let themselves be captured by virgins”.

The unicorn’s horn was also misidentified – often deliberately. Medieval traders sometimes offered rare unicorn horns for sale. The long, spiraled horns certainly looked the part. But in fact, they were the tusks of the sea creatures, narwhals. 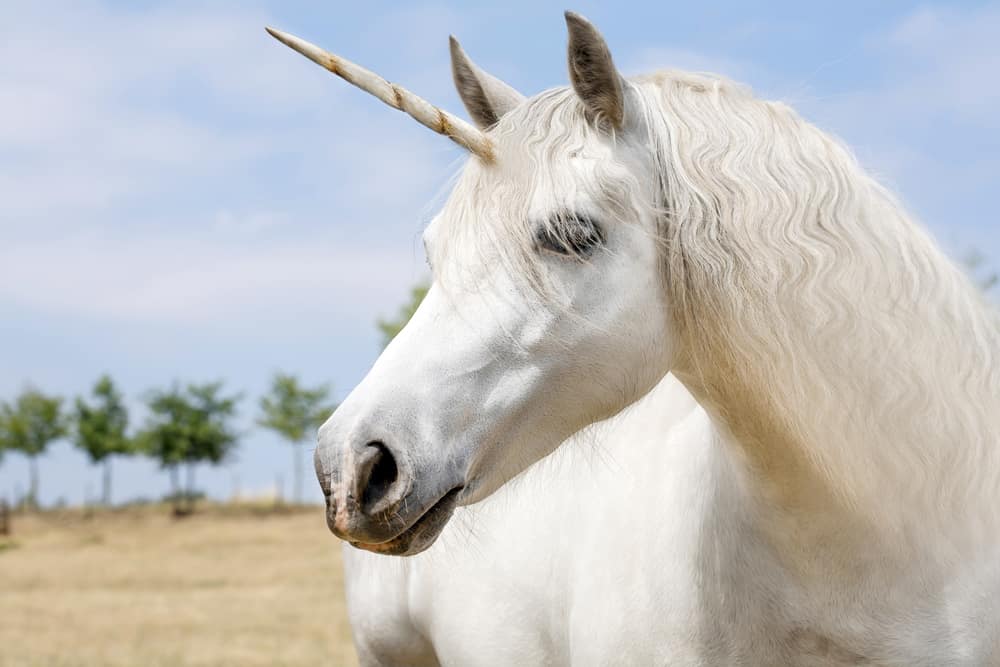 These fake unicorn horns would have been very valuable. The purity of the unicorn and its association with Christ meant that it was believed to have healing powers.

In the 2nd century AD, the Physiologus included the claim that unicorn horns could cleanse poisoned waters.

In the Middle Ages, cups made of “unicorn horn”, known as alicorn, were believed to offer protection from poison. The Tudor Queen Elizabeth I reputedly owned such a cup. It was said to be worth £10,000 – a sum that would have bought you a whole castle in those days.

Unicorns were also said to be able to depend on their horn as part of their ability to evade capture.

According to the 6th century Alexandrian merchant Cosmas Indicopleustes, a pursued unicorn would happily throw itself off a cliff.  The fall would not be fatal, because it would land on the tip of its horn!

It was probably the narwhal tusk that was responsible for the modern depiction of the unicorn horn. From the Middle Ages onwards, illustrations reliably show the unicorn with a long, white and spiraled horn – conveniently just like the ones occasionally offered for sale.

Despite being revealed as narwhal tusks in the mid seventeenth century, fake alicorn continued to be traded. It was offered for sale as a healing powder right up until the early 18th century. As well as detecting poison, it was believed to cure a whole range of diseases.

It wasn’t just in the 17th and 18th centuries that people in need of hope looked for fantastical remedies. Unicorns re-emerged in recent years in political debate around Brexit, Britain’s departure from the European Union.

Those wanting Britain to remain in the EU accused the other side of peddling false promises. The belief that Britain would be better off outside the union, they said, was as realistic as believing in unicorns. Some protestors even took to wearing unicorn costumes.

Even the Irish Prime Minister, Leo Varadkar, referred to those pursuing Brexit as “chasing unicorns”.

Unicorns, it seems, now represent something that is simply too good to be true.

From the 15th century, unicorns became a popular device in heraldry, the emblems of noble houses.

The usual depiction showed them as horse-like creatures with the hooves of a goat and a long, delicate (narwhal-like) horn. They were generally considered to symbolize power, honor, virtue and respect.

The royal emblem of Scotland features two unicorns, while that of the United Kingdom features a lion for England and a unicorn for Scotland. The battle between the two nations is reflected in a traditional nursery rhyme, which records the creatures “fighting for the crown”.

To this day, there are two versions of the royal coat of arms for the UK. That used in Scotland shows both the lion and unicorn wearing crowns. In the rest of the country, only the lion wears the crown!

The royal coat of arms of Canada is based on that of the United Kingdom. It also features a lion and a unicorn. But here, the diplomatic Canadians have given neither creature a crown! The emblem is also adorned with maple leaves representing Canada. 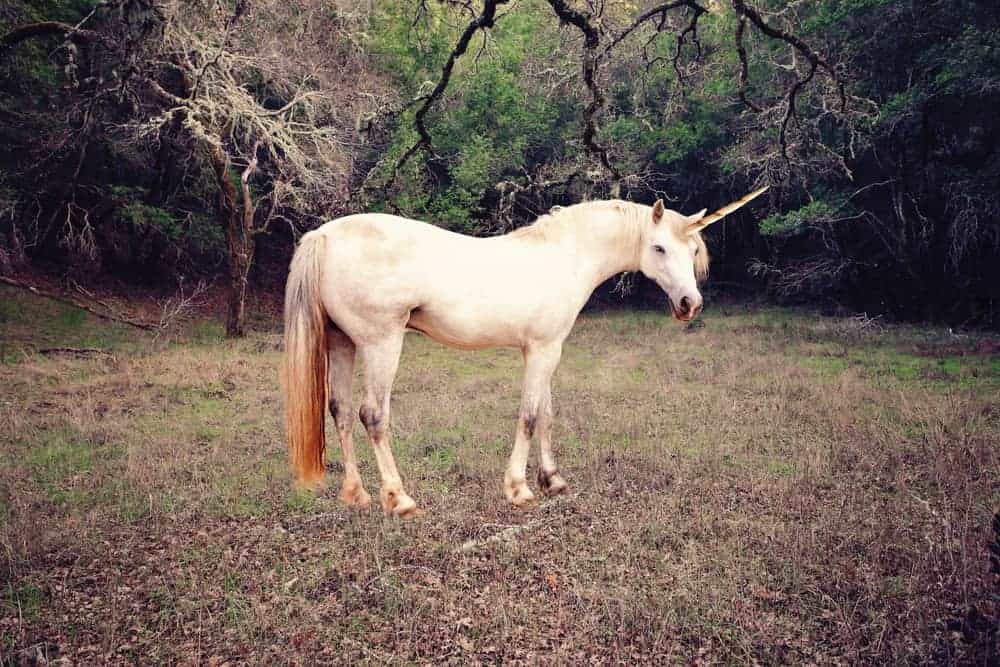 Some people believe that unicorns can act as spirit animals, spiritual guides and protectors. Dreams of unicorns are considered a sign that the unicorn has chosen to be your guide. You may also find yourself regularly noticing unicorns, whether in art, books, television or movies.

If that’s the case, count yourself lucky! The mystic symbolism of unicorns suggests that you are someone blessed with beauty and virtue.

And the unicorn horn is also associated with the cornucopia, the horn of plenty. This is thought to mean that unicorn dreams are omens of approaching good fortune, particularly in financial matters.

While you may not be able to see a unicorn in real life, its symbolism can still be important to your spiritual journey.

The unicorn reminds us of the strength inherent in virtue and gentleness. It tells us that aggression is not the same as power or courage. And it speaks to us of the healing powers of kindness, both to ourselves and to others.

The unicorn can also be a warning against putting our trust in false promises. Remember the lesson of the narwhal tusk: just because someone tells you it’s a unicorn horn, doesn’t mean it is.

Trust what you can verify for yourself. Look at the sources of the information you’re seeing. Ask yourself – are they credible? Do they have their own agenda? Can you check what they’re saying with information from other places, especially primary documents?

Research has shown that we’re all more likely to believe information that reinforces our own existing views and prejudices. The unicorn asks us to reject that easy comfort and seek the truth – however uncomfortable it may be.

The Many Faces of Unicorns

That brings us to the end of our look at unicorn symbolism. As we’ve seen, the idea of unicorns has encompassed many different types of creatures through the centuries.

But since the Middle Ages, the unicorn has come to embody the most positive of virtues. It is a creature gentle but strong, benevolent yet powerful. And its purity brings the promise of healing, both in physical and spiritual terms.

We’ve also seen how the hopefulness inspired by unicorns can be subverted. Today, the unicorn reminds us to be alert to those who would sell us narwhal tusks.

We hope you’ve enjoyed learning more about the symbolism of the unicorn. And we wish you well in applying it to your spiritual journey. 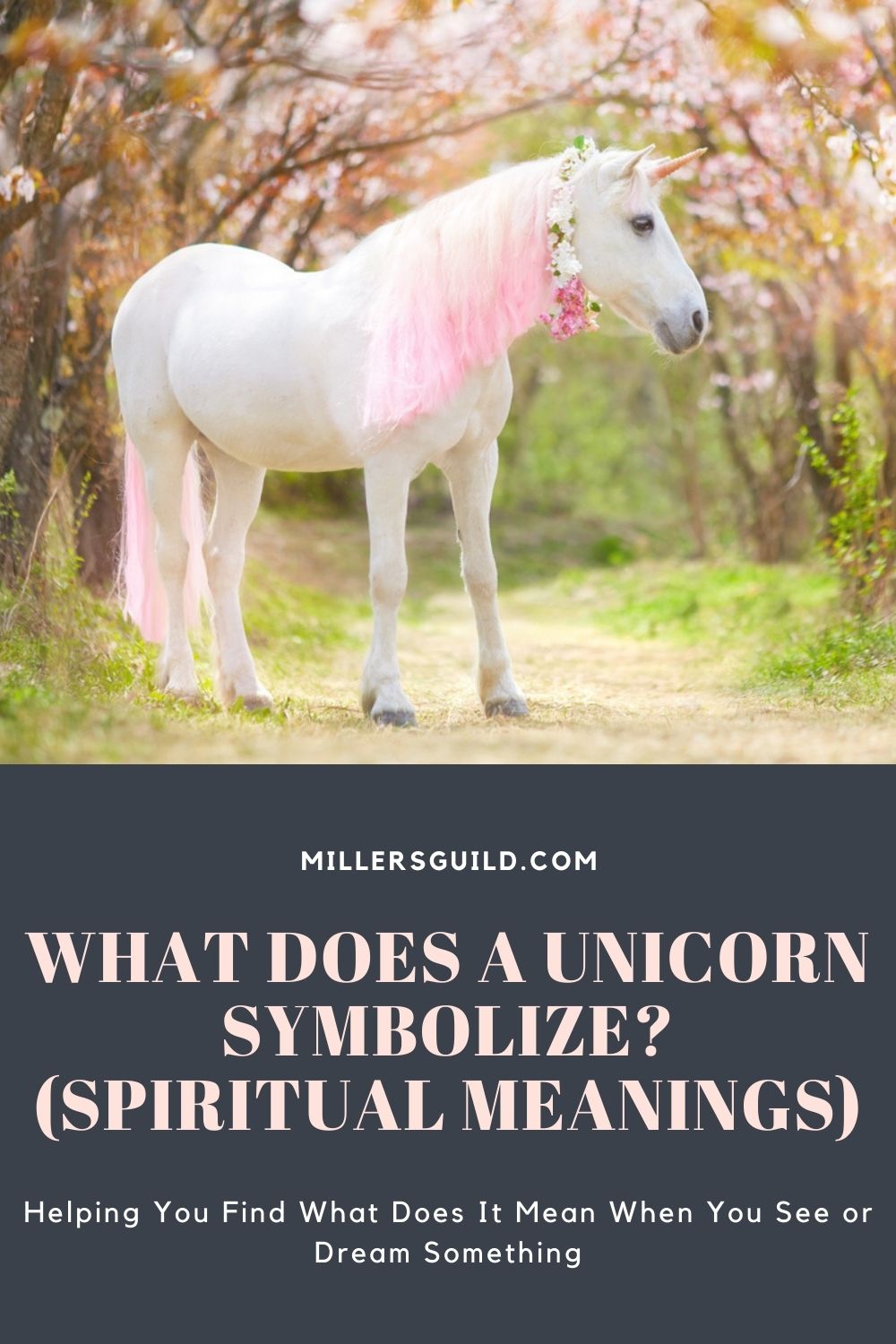