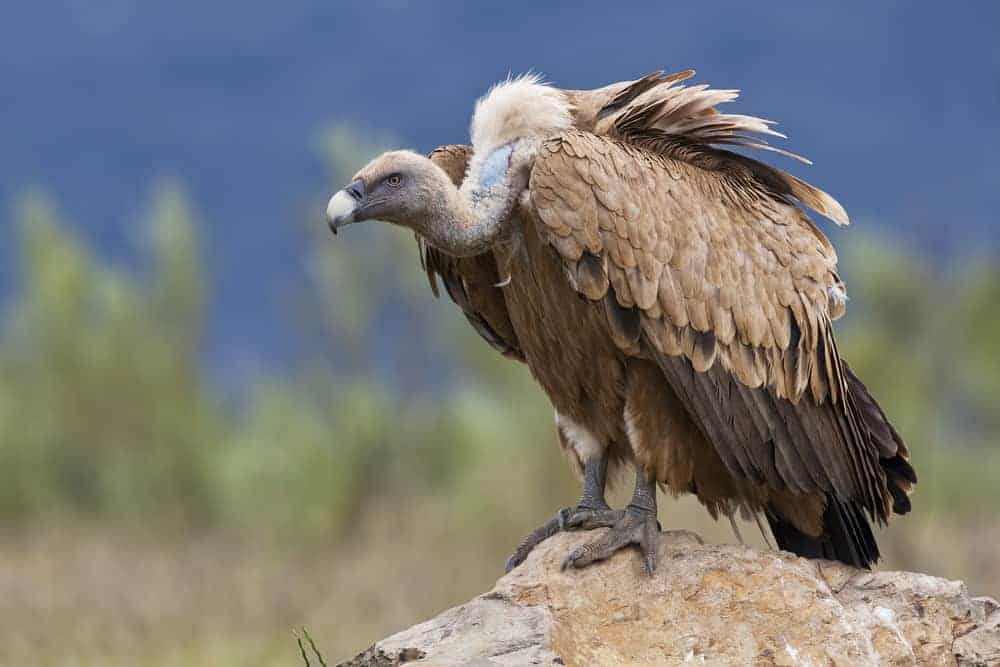 In modern times, vultures have had a bad rap. In westerns, we’re most used to seeing them perched on some rocky crag. There they sit as our hero staggers through the parched desert. The moment he falls to the ground, they’ll swoop down for the all-you-can-eat buffet!

Yes, vultures aren’t the cuddliest of birds. But that hackneyed portrayal misses the far deeper spiritual meaning of vultures.

We’re going to explore the symbolism of these fascinating birds through the ages. And we’ll discover what spiritual messages they might hold for us.

So if you’re ready, let’s find out more … 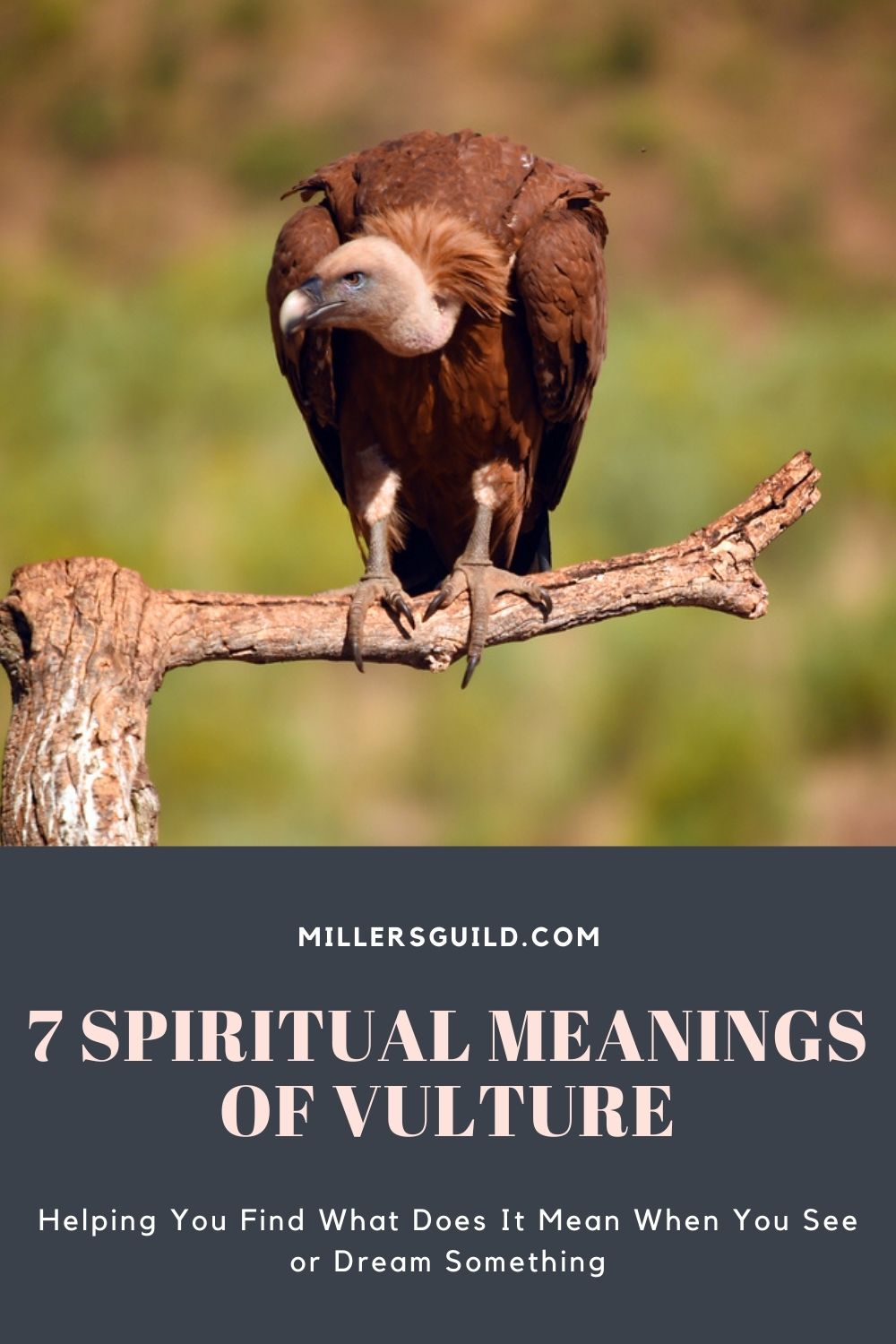 The Vulture in Neolithic Times

Vultures were held to have special meaning from the earliest times.

The fascinating settlement of Göbekli Tepe in Turkey dates back to between 10,000 and 8,000 BC. It includes ancient limestone pillars on which numerous reliefs of animals are carved. These include many depictions of birds, and especially vultures.

Little is yet known about the civilization that lived at Göbekli Tepe. But it seems clear that vultures held an important status. And it was likely linked to ideas of death and rebirth. This symbolism is also seen in other settlements from the neolithic period.

Other ancient sites in Turkey and Syria show evidence of the place given to vultures in cults relating to death. At Çatal Häyäk, frescoes showed vultures accompanying the dead into the afterlife. Shamans are also shown leading rituals dressed as vultures.

Some ancient cultures also used vultures as an alternative to burying their dead. Zoroastrians and Tibetan Buddhists continue this practice to this day. The dead are laid out in the open to be consumed by vultures, a practice known as “sky burials”.

In ancient Egypt, the bird was chosen as the emblem of the kingdom of Upper Egypt. Egyptian pharaohs were often depicted with carved vultures amongst their royal regalia.

The goddess Nekhbet, patron of Upper Egypt, had the head of a vulture. Her priestesses dressed in white vulture feathers. Nekhbet was associated with death and rebirth, linked to the way the scavenging vulture took life from death.

The Egyptians believed that all vultures were female, and that eggs were laid without any male intervention. As such, the birds were seen as symbols of motherhood and purity.

The ancient Assyrians, on the other hand, saw the vulture as being beyond masculinity and femininity, darkness and light. It was instead a symbol of the connection between all things, the central “oneness” of the universe.

Vultures also appear in Greek mythology. The ancient Greeks associated them with life and death, linking them to the Underworld. The vulture was also a sacred bird, associated with the god Apollo. It was connected to psychic knowledge and the ability to foretell the future.

The Romans associated vultures with the gods too. For them, it was the bird of Mars and Saturn.

This connected the bird to military strategy, masculinity and protection, all attributes of Mars. And through the link with Saturn, vultures were connected to the harvest, agriculture, justice and strength.

Vultures also appear in the Bible, although with less a positive portrayal. The birds are depicted as being unclean because they feed on the dead.

The Vulture as a Symbol 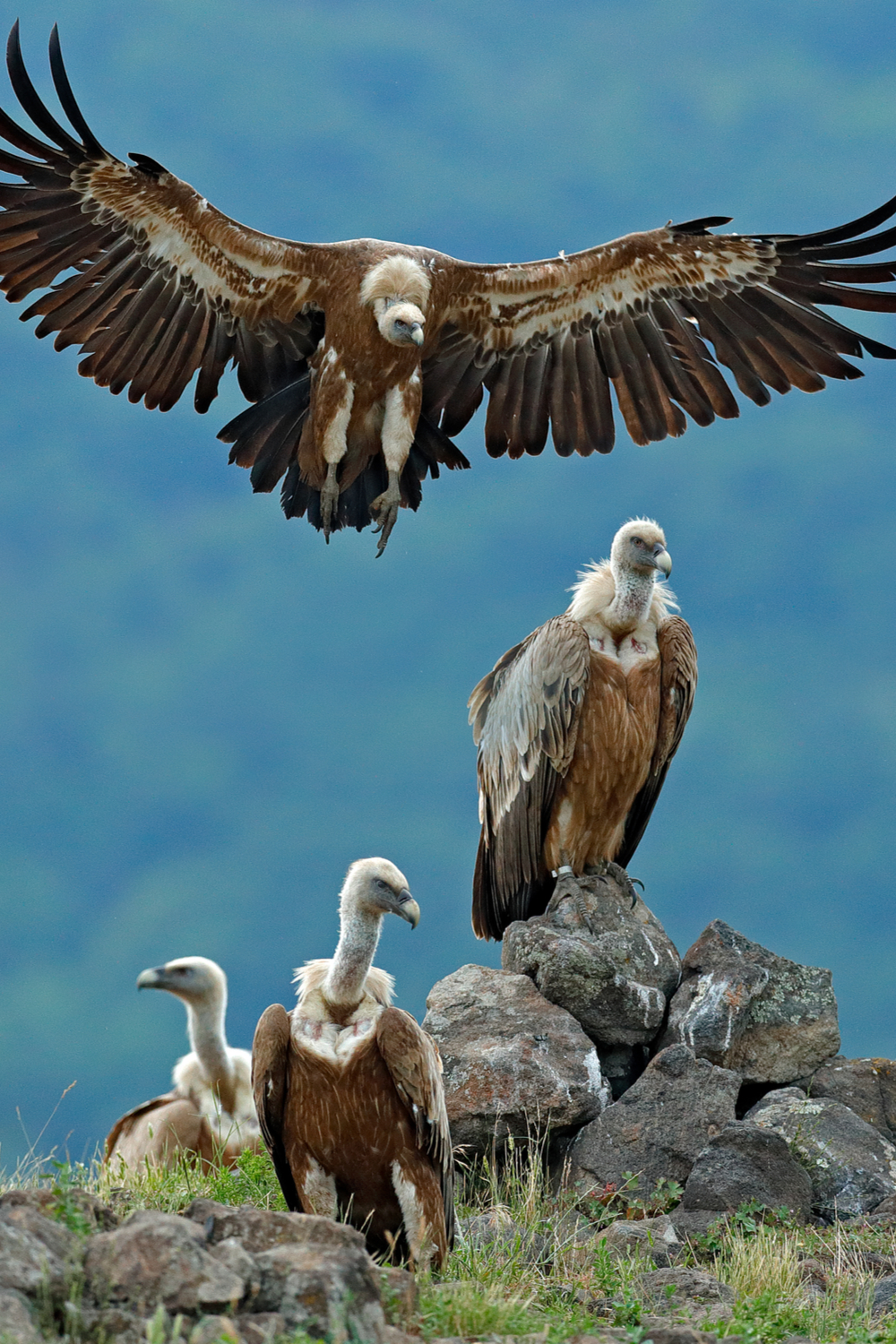 The vulture continues to have a rich symbolism to this day.

In East Africa, many tribes hold the vulture in high esteem. The bird’s ability to take life from death by scavenging for its food is seen as a symbol of rebirth.

Some tribes also believe that vultures carry the souls of the creatures they have consumed. In doing so, they can carry offerings to the gods. This gives vultures great importance in religious rituals.

And in western countries, vultures often appear in popular culture. They’re frequently seen as a threatening presence, signifying that death is near.

Finding Your Own Spiritual Message

Vultures have been associated with death and rebirth throughout the ages. But with so many different takes on exactly what they signify, finding the spiritual meaning in an encounter with a vulture can be difficult.

Everyone’s experience will be different, so there’s no textbook answer.

But the first step in finding the meaning of your own experience is to look inwards. Ask yourself what you felt when you saw the vulture. And meditate on your own associations with the bird.

You may also find it helpful to understand some of the more general interpretations of vulture encounters. Just remember that, while they can provide guidance, you are the best judge of your own experience. 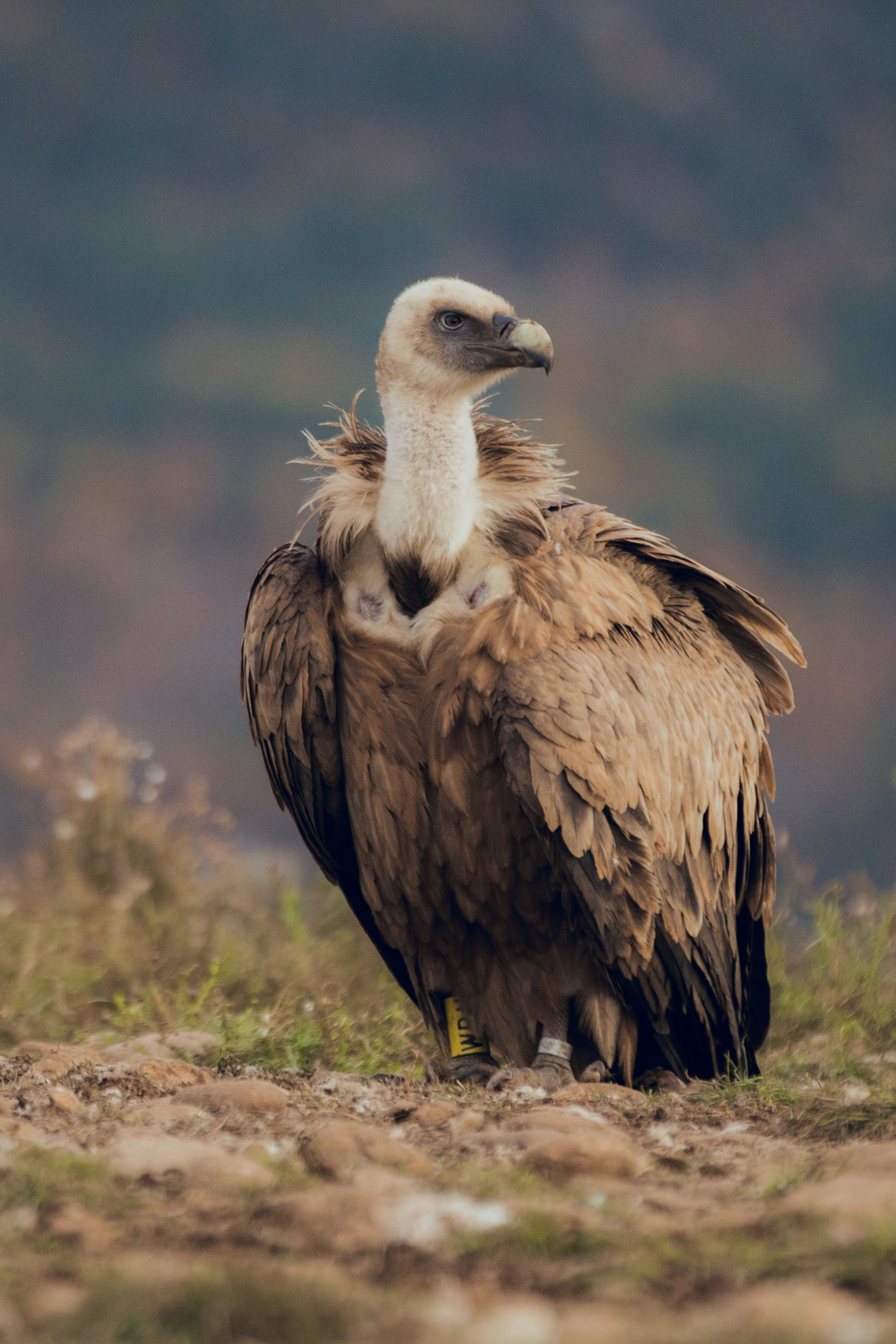 The phrase “The vultures are circling” has passed into common usage. It means that people are waiting for someone else’s downfall, hoping to profit by it.

But seeing vultures circling in a literal sense may not have the same spiritual meaning. It’s much more likely that any message relates to the vultures’ link to change and rebirth.

If you’ve seen vultures circling and it felt significant to you, it may herald a period of transformation. Change isn’t always easy, but the vulture’s appearance is a reminder that new doors open when others close.

The vulture’s effortless circling in currents of warm air also contains a message to how to approach change. Try to relax and take life as it comes. Don’t waste energy telling yourself things should be different. Instead, observe what is happening and be ready to respond.

If you can do so, you’ll be able to get the best from any situation.

The two most common types of vulture in North America are the black vulture and the turkey vulture. And the meaning of your encounter can differ, depending on the kind you saw.

Black vultures are smaller and more aggressive. They’re also more likely to be found in a group. That means this kind of vulture can often be linked to meanings around community.

The vulture may be a reminder to pay attention to those around you. Perhaps you could benefit from seeking their encouragement or support. Or perhaps there are people close to you who need support themselves.

Colors also have their own symbolism. In western cultures, black is usually associated with death. But remember, in a spiritual sense, death represents transformation. It’s also believed that black is a color that can absorb negative energies.

Seeing a black vulture can therefore be an omen of change. You can take comfort from knowing that you’ll be protected during the transition. And beyond the change lies renewal and the beginning of something new.

Perhaps the most striking feature of the turkey vulture is its red head. The coloring draws attention to this part of the bird’s body, the location of the crown chakra.

The crown chakra is linked to divine connection and to our oneness with the universe.

So seeing a turkey vulture may be a prompt to reflect on how we connect to the world around us. This echoes the meaning given to the vulture by the ancient Assyrians, who saw it as a symbol of the unity of all things.

The encounter could also link to the vulture’s symbolism of abundance and transition. Another interpretation could be that change is coming, and this could relate to financial matters. It could be a good time to take stock of your income and outgoings.

4. A Vulture Spreading Its Wings

Vultures have an impressive wingspan of almost five feet. If you’ve seen a vulture spreading its wings, it was probably an imposing sight. But what might it mean in spiritual terms?

Some believe that the meaning here is more likely to relate to the wings than the specific symbolism of the vulture. Seeing any bird spread its wings is usually interpreted as an invitation for us spread our own metaphorical wings.

Perhaps you’ve been presented with an opportunity, but you’re feeling nervous about taking it. Maybe negative beliefs about what you’re capable of are holding you back.

The vulture may be acting as a reminder of your own inner power. And it can be an encouragement to take the chances that come your way. Only by being prepared to step outside your comfort zone can you make real progress to achieve your goals.

Vultures also spread their wings in order to reduce their temperature in the hot desert sun. An alternative interpretation, then, is that this is a sign to “cool down”.

Have you been rushing around, unable to take time to pause and reflect? Or perhaps you’ve been swept up in the emotion around a situation, and it’s in danger of clouding your judgement.

The vulture may be encouraging you to take a step back and reassess your position.

We’ve already seen that one of the key elements of the symbolism of vultures is death and rebirth. In a spiritual sense, these are linked to transformation. If the vulture you saw was itself dead, it could signify you’re nearing the end of a period of change.

If the change you’ve been experiencing has been challenging, the message may be to hold on. It won’t be long before things are back on an even keel.

6. Vultures on the Roof of Your Home

A vulture on the roof of your home is usually considered an omen – but it could be positive or negative.

It might be that the vulture is foretelling physical death. It’s more likely, however, that it’s associated with spiritual death – the ending of one phase and the beginning of another. So the vulture could be predicting changes on the horizon.

An alternative interpretation is linked to the vulture as a symbol of rebirth. It could be that the appearance of the bird is signifying healing.

7. The Vulture as a Spirit Animal

If you’ve seen a vulture on repeated occasions, some people believe it could be acting as your spirit animal. That’s a creature that is there to provide protection and guidance on your spiritual journey. So what does it mean to have a vulture as a spirit animal?

It could mean that you have an affinity to vultures. Perhaps you’re able to make the best of any situation, handling change with aplomb. You may have an intuitive understanding of your place in the universe. And you’re able to function effectively in a community, both giving and taking.

The vulture could also be acting as a spirit animal to draw attention to its particular spiritual symbolism. This is most likely if the sightings take place when you feel in need of support and guidance.

That could be the case if you’ve suffered a bereavement. The vulture could be acting as a reminder that death is just another form of transformation.

And there’s a similar message if you’re experiencing a period of change that you’re finding challenging or uncomfortable. The vulture reminds us that change is necessary for renewal. And it tells us that we have the power and inner resources to navigate that change successfully.

The vulture is also a reminder of our place in the world, and in our immediate community. It can be a prompt to seek the help of others when we’re struggling. And it can remind us to offer a helping hand to those around us who need support.

We hope you’ve enjoyed our look at the varied spiritual meanings of the vulture. This amazing bird is most often associated with death – but that isn’t its most important lesson.

The vulture reminds us of our own resourcefulness, our inner strength, and our part in the wider community. It represents harmony and balance. And it reminds us that change, including physical death, is part of the necessary cycle of life and renewal.

Reflect on the details of your own encounter with a vulture to find its true meaning. Remember to think about the emotions you felt too. Those are often the best way to find the message that resonates with your own experience.

Good luck in finding the spiritual message of your own vulture encounter. 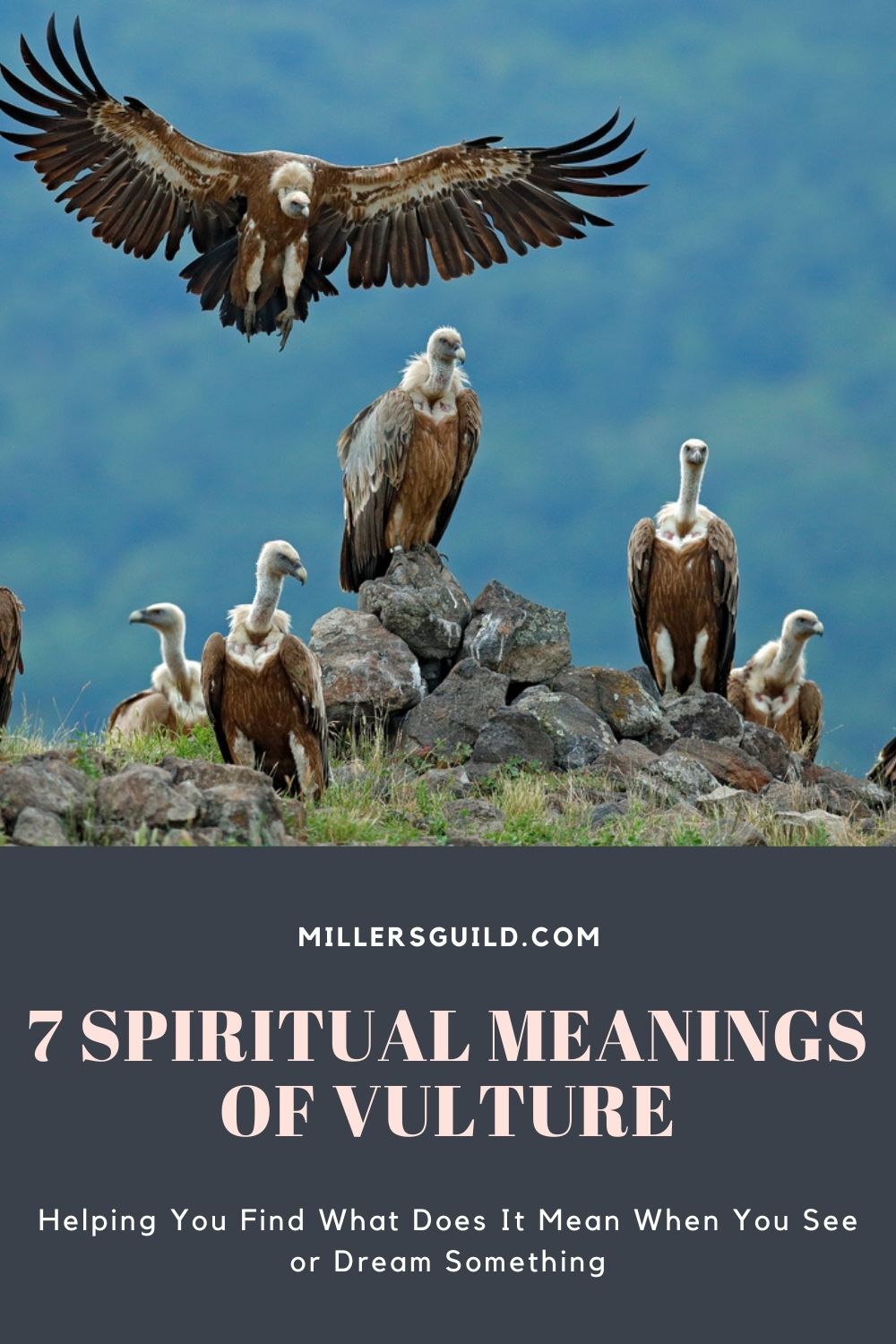