Blue whales are the largest animal that has ever lived on our planet. And, in case you were wondering what these mighty creatures mean spiritually, you’re at the right place!

Whales make fabulous spiritual guides and have many teachings to share with us. They are mostly symbolized for their communication, music and mysticism, intelligence, emotional rebirth, and psychic abilities.

In this post, we’ll dive deep into various cultures and religions and their interpretations of whale spirit animals. We shall also discuss some common whale dreams and their meanings at the end. Let’s begin! 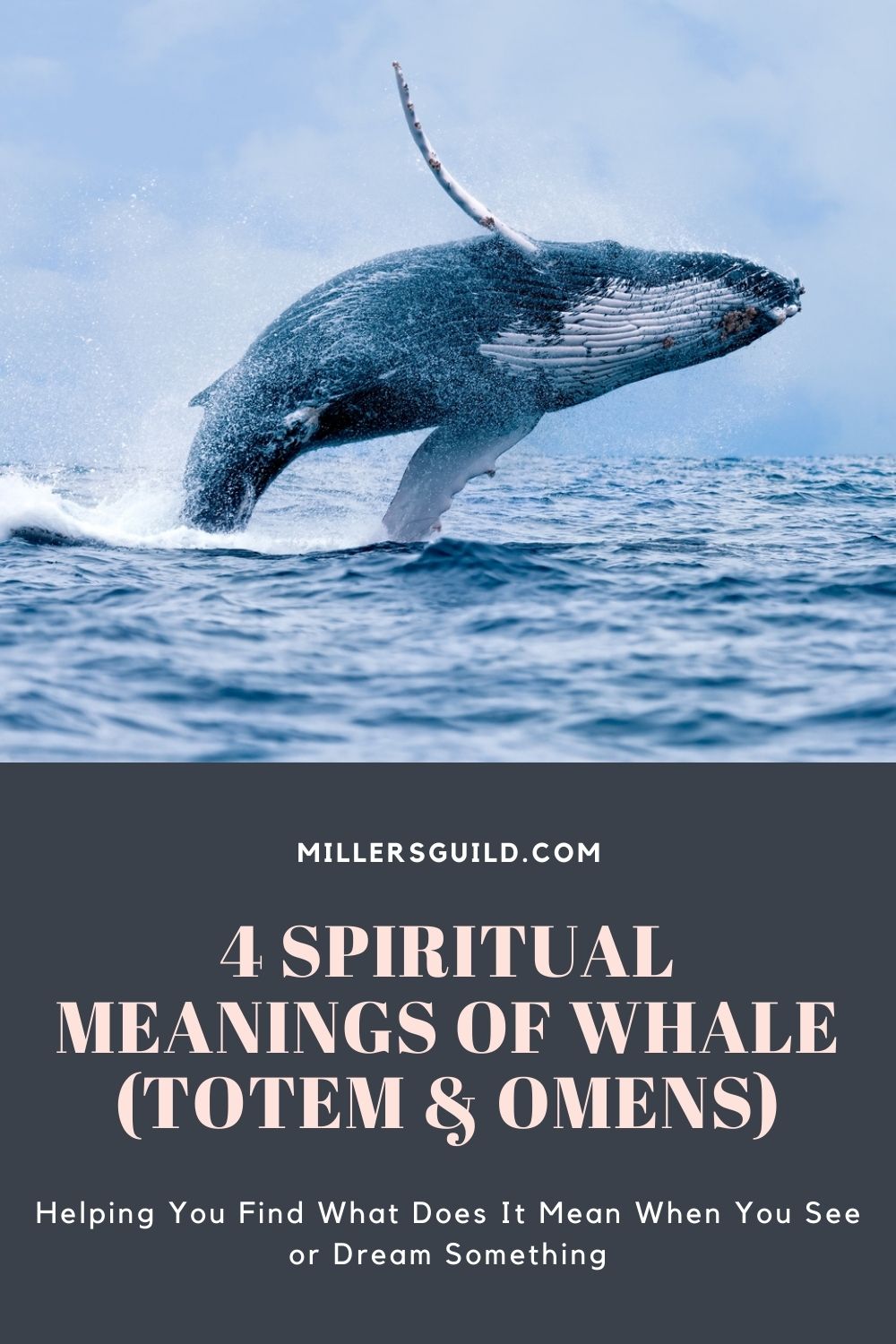 What Do Whales Symbolize?

Whales are impeccable communicators. They use different types of noises to communicate and socialize with their family and peers.

In fact, did you know whales produce the largest vocalization among all the living creatures on the earth? Blue whales make sounds that can range up to 180 decibels!

Whales are also considered to be spiritual guides to finding your voice, your own music, and rhythm to your life. Whales sweep their mates off their fins by singing to them. Whale spirits tell you that music is the power, and music heals.

Sperm whales are famous for possessing the largest brain, i.e., around 7.8 kgs, among all the creatures extant on our earth.

Whales not only boast their physical dominance when it comes to their brain size, but they also make proper use of it. They are known to display complex social behavior and coordination skills while hunting. So, whales symbolize wisdom and guide you to use your intelligence in the best way possible.

Animals are believed to possess supernatural power and pick up on tiny details that humans generally ignore. Cetaceans are highly speculated to have psychic abilities. They urge us to broaden our consciousness and awareness level and tune into our intuitive abilities.

In Buddhism, whales are symbolized as protectors and are even worshipped in Vietnam and Japan. In a legend, a Buddhist deity Avalokitesvara Bodhisattva tore her cassock and turned them into whales to overpower a storm and protect a man.

Similarly, there’s another tale of a Bodhisattva ruler who demanded to be reborn as a whale such that he could self-sacrifice to end the hunger and plight of his kingdom.

In Hinduism, whales are considered to be one of the re-incarnation of Lord Vishnu. There are legends that claim that the deity took ‘Matsya-avatar’, meaning a form of a fish, and thus whales are symbolized for power.

Whale Symbolism in the Bible: 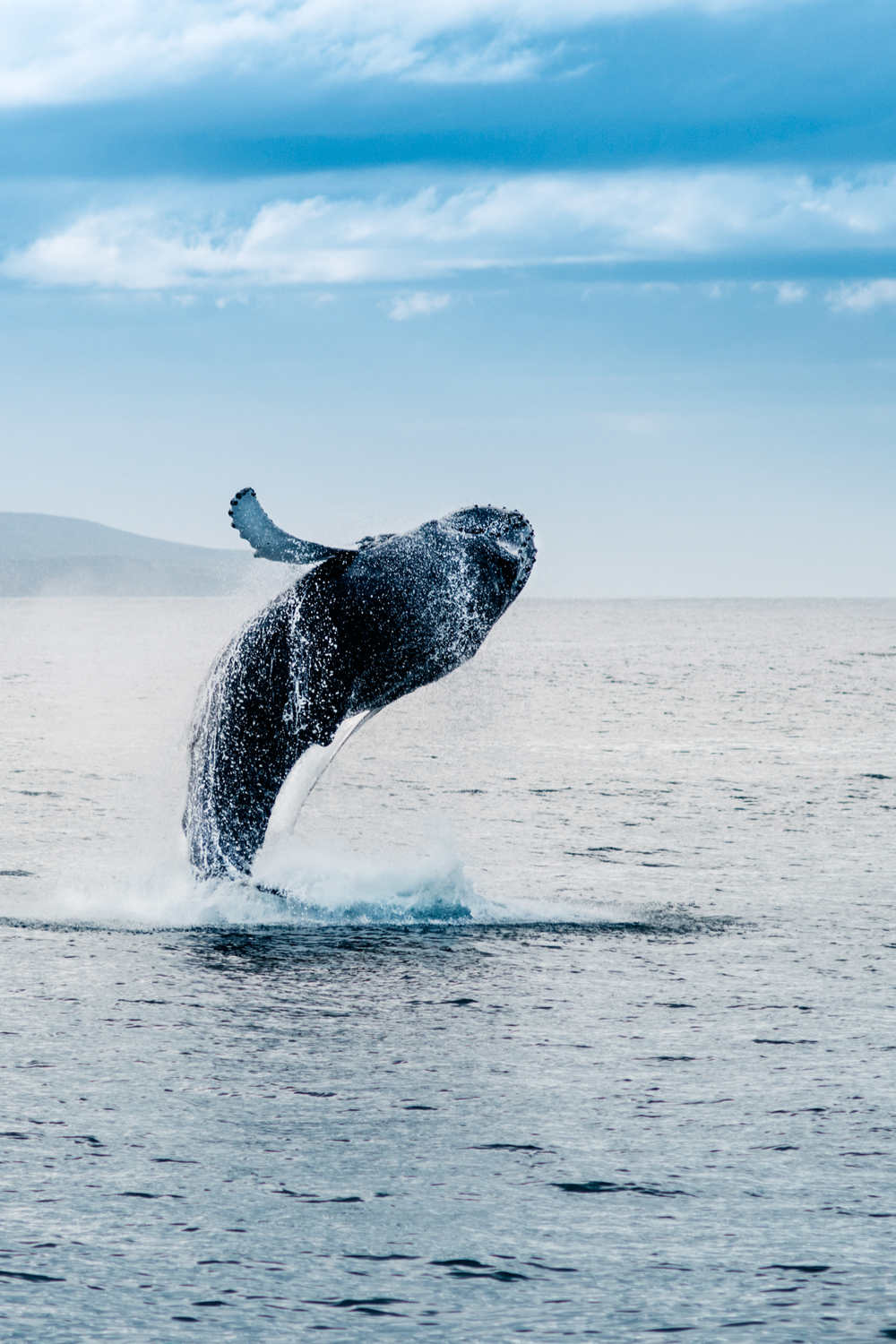 You might have heard of a Biblical tale featuring Jonah and the whale. Jonah, an egoistic person who refuses God’s calling to be a prophet, is swallowed as a whole by a whale. After 3-days of self-reflection, he is then sent to Ninevah to serve as a prophet.

Nevertheless, what the whale in the story symbolizes is open to interpretation and has various speculations.

On the one hand, many believe that whales are god-sent who tamed an egoistic person like Jonah. They believe whales urge us to introspect and be comfortable with our own silence.

On the other hand, many Christians believe that whales symbolize sea monsters and their scary opened mouth are the gateways to hell.

In many Celtic cultures, whales are depicted as protectors and guides for those at sea. There’s a legend that talks about how a whale offered St. Brendon, a famous navigator, and his crew a service his back in the midst of the terrifying waves of stormy seas.

The constellation Cetus is also named after whales, solidifying the symbolization of whales’ compassion and navigation for those at sea.

Also, whales are symbolized for magic and music in some Irish cultures. You might have heard of the Irish harp made up of a whale’s bone, haven’t you? Their bones are believed to be powered by the magic of music.

To Native Americans, whales symbolize good luck, abundance, wisdom, nurture, mysticism, and power. Many Native American tribes consider whales to be the guardian or the mother of seas and oceans.

Furthermore, some tribes believe that those who drown in the sea are reincarnated as killer whales. So, many believed an orca sighting on the seas to be the reconnection with their fallen ancestor.

In Chinese folklore, there’s a famous legend about the Lord of the sea, Yu-Kiang. This sea creature was depicted to have human hands and legs and wrath so deadly that he would engender sea storms if angered.

In Vietnam and Japan, whales are associated with deities. These sea creatures are considered powerful, benevolent, and protectors of those navigating through the harshness of seas. They are also revered as harbingers of good luck and fortune.

Killer whales or Orca spirit animals guide you towards building more loving, healthy, and secure familial and social relationships. Even if you’re going through hardships, they remind you that you’ll once again rise again.

Orca people also make great and loyal leaders. However, with this great power, there’s a chance that these people might sometimes get blinded by their haughtiness. So, those with killer whale spirit animals are best when kept their ego under check.

Beluga whales are the greatest advocate of self-love and, at the same time, also urges you to embrace people and things despite their flaws. Those with this spirit animal are playful social butterflies. They are also deep-thinkers and active manifesters.

The blue whale spirit animal urges one to have faith in their capabilities and reassures that all the major changes will bring about positivity and success in their lives.

People with blue whale spirit animals are impeccably striking and intelligent. They are also extremely generous and have a habit of never turning down any help requests.

Likewise, people with Humpback whale spirit animals are creative and are great at expressing themselves musically. They’re great at socializing and networking. Nevertheless, their me-time is equally precious to them.

When To Call On Your Whale Spirit Animal: 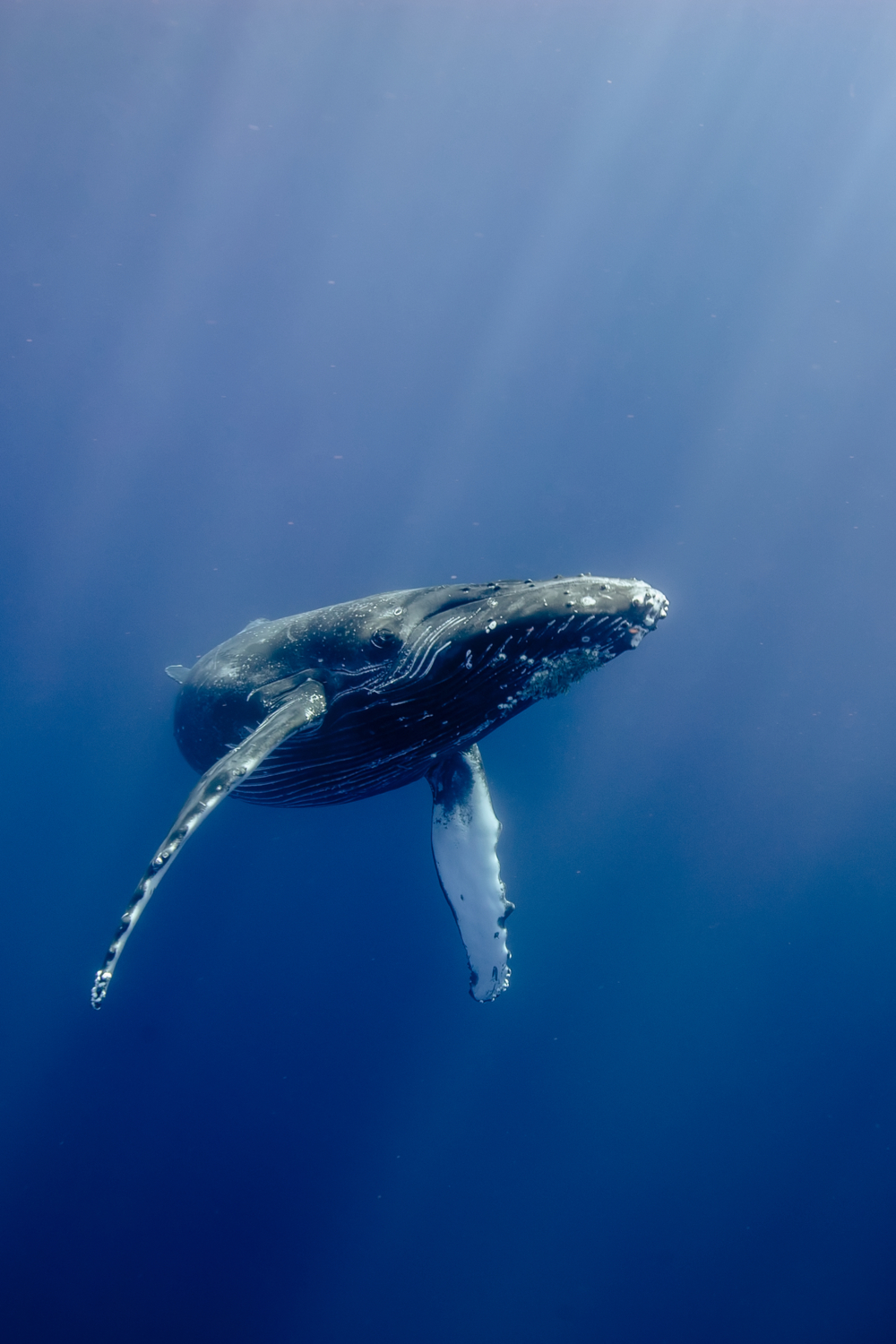 Is your lifely turning too hectic for you to handle? Maybe the pent-up stress in your professional life is troubling your mental peace? If you feel too tied up and feel an urgent need to take a break from everything, it is the perfect time to summon your whale spirit animal.

Whale spirit animal can be your best help-mate to reignite your lost social connections and pamper your loved ones.

This spirit animal also reminds you to take care of yourself in the midst of all the hustles and bustles of life. So, whenever you feel the desperate need to shut out all the outside noise and be in tune with your inner self, that’s the perfect time to call on your whale spirit animal.

In some cultures, the meaning of encountering a whale depends on how healthy the whale is. If the whale is merrily swimming, it is a sign of good luck and fortune. On the other hand, if you witness a helplessly sick or hunted down whale, it portends ill-fortune.

For Inuit people, seeing whales symbolize good fortune. This symbolism is most probably borne out of the fact that whales made a primary diet among many Native American tribes.

Common Whale Dreams and Their Interpretations:

If a blue whaled appeared in your dream, it is an indication that whatever issues you’re facing in your waking life currently aren’t as problematic as you think. They urge you to use your imagination and creativity to find the solutions.

Get ready to receive new spiritual teachings if you recently dreamt of a beluga whale. And, if you dreamt of a humpback whale, you’re probably feeling stuck in your life. This dream is a sign for you to be more inquisitive and experiment with new ideas and situations to bring back the enthusiasm in your life.

Dreaming about a killer whale says much about your feelings. You need to learn to control your emotions and muster the courage to face adversities in your life. This dream also indicates that you have what you need to succeed.

Finally, dreams about dead whales represent your inner feeling and how you’re feeling left out and lonely in your waking life. And, dreaming of slaying down these mighty creatures is a sign that you’ll soon be able to reap the fruits of your hard work.

Despite their mighty size and notorious image as ruthless killers, whales do have a lot of spiritual messages to share with us. They urge you to become mentally and emotionally intelligent, face adversities with fierceness, and tune with your inner magic and intuition.

We hope you enjoyed this guide to whale spirit animal and their symbolism. Do you have any more queries regarding whales? We’re all ears! 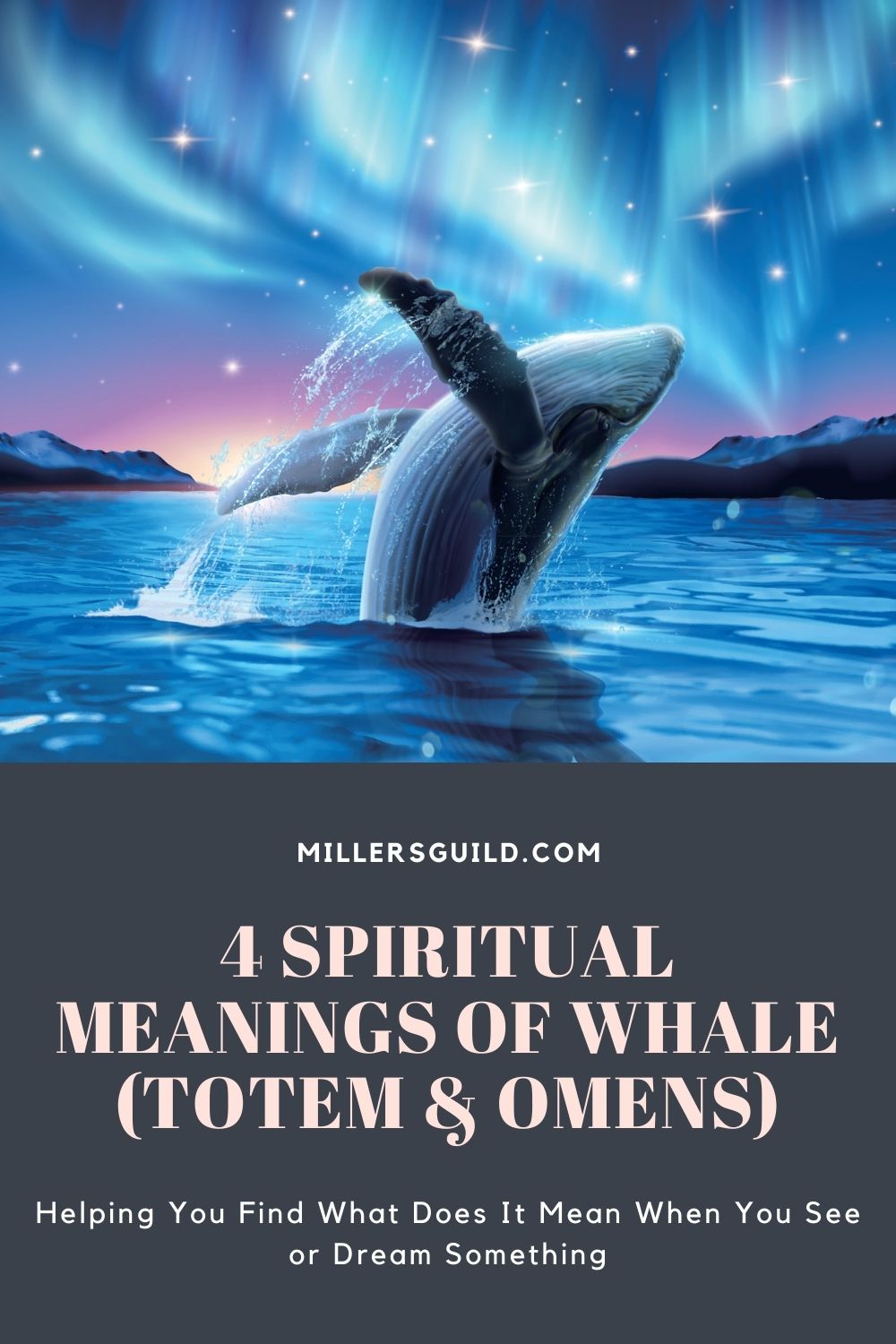