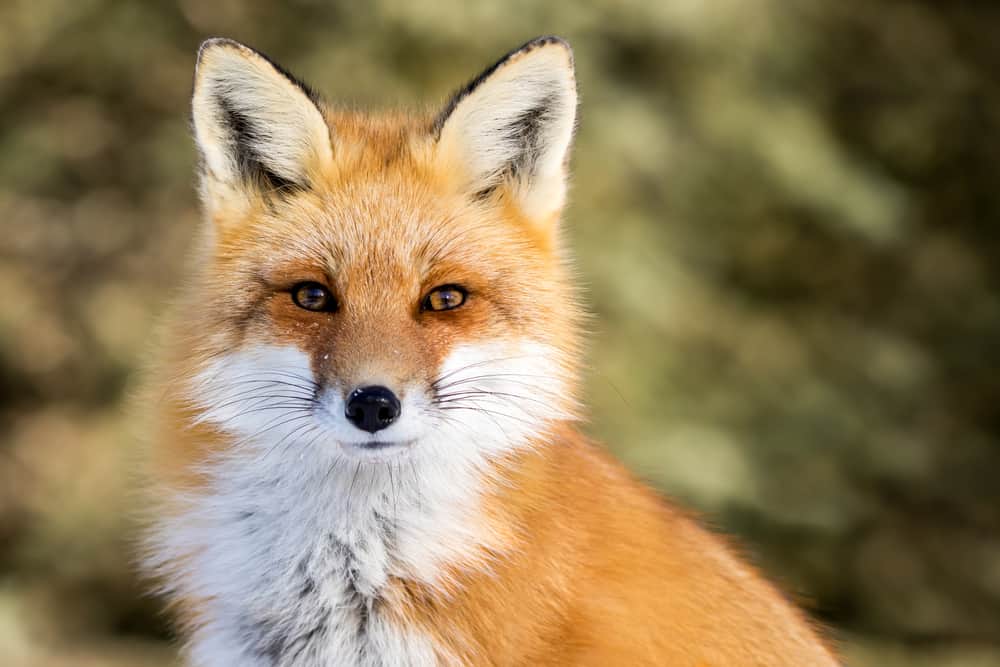 Sometimes an encounter with a wild animal strikes us as important in some way. Maybe there was something unusual about it. Perhaps we felt a strong sense of connection. Or perhaps it was the latest in a pattern of repeated appearances that felt like more than coincidence.

It’s at times like these that we might want to understand whether there’s a deeper message. And that’s what we’re here to find out.

In this article, we’re going to look at the spiritual meaning of foxes. We’ll find out more about their symbolism, and how they’ve been viewed by different cultures. And we’ll learn about the significance of different scenarios, and how to interpret their meaning in our lives.

So if you’re ready, read on to find out more about foxes as spiritual creatures. 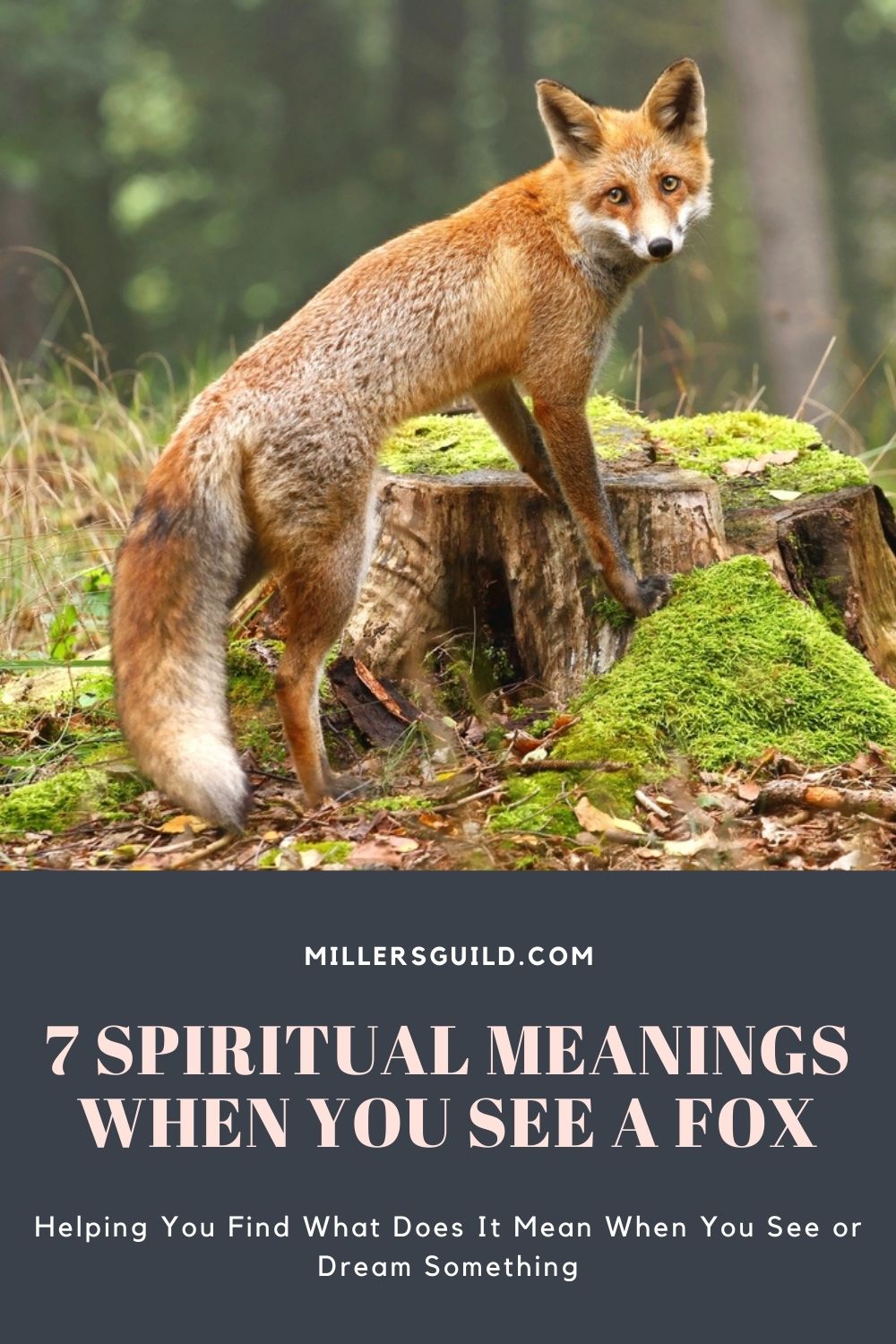 To start with, let’s address the elephant (or fox) in the room. Did your encounter with a fox carry any spiritual significance at all? Or was it simply something that happened to you one day?

The answer to this will depend on your own belief systems. And no-one but you can provide a definitive response. But if you’re not sure, there are some questions to ponder which might make things clearer.

The most important of these is, how did you feel when you saw the fox? It’s natural to be taken aback when encountering a wild animal. But did you feel anything more than that?

Did anything about the way you felt take you by surprise? Perhaps you felt a sudden sense of serenity. Or maybe you felt invigorated. Maybe you’re not sure how you felt, except that it was important in some way.

Any of those reactions could suggest a deeper spiritual relevance to your fox encounter. In short, if it felt important to you, there’s a reason for that. And delving deeper into the spiritual meaning of the fox could help you to discover what that reason is.

Another thing to consider is the nature of your encounter. Did it take place somewhere where foxes are seen regularly? Or was it a very unusual occurrence? Was it the first time you’d seen a fox, or the latest in a series of encounters?

And what happened when you saw the fox? Did it ignore you, or acknowledge you in some way? Did it react to your presence in a manner that seemed strange?

Any aspect of the experience that felt unusual, uncanny, or downright odd could be a sign that there’s a deeper spiritual message to uncover.

All this means, of course, that the nature of this message will be personal to you. It will be affected by your own associations with foxes, and the emotional reaction you experienced.

That said, the quest to discover the meaning behind your fox encounter can be aided by understanding its symbolism. So let’s explore the way foxes have been viewed in different cultures from around the world.

The Symbolism of Foxes

Both these depictions are found in the folklore of different Native American tribes. In some legends, foxes appear as wise and benevolent, whilst in others they’re cunning tricksters.

The Celts similarly hedge their bets. The fox is a wise creature who understands the forest better than any other. But it can also shapeshift into human form, and its seductive charm cannot be trusted.

Shapeshifting foxes also appear in Japanese mythology. And here foxes can be manifestations of either good spirits, zenko, or bad, known as yako.

Zenko fox spirits are known for their wisdom and understanding. Yako, on the other hand, have the familiar traits of seductiveness and manipulation.

It’s a similar story in Chinese mythology. Foxes appear in a multitude of myths and legends, sometimes as good characters and sometimes as bad.

And for Finns, whilst the fox is wily, that isn’t a bad thing. The creature is admired for its ability to use its intellect to outwit its opponents.

So foxes can be associated with both positive and negative characteristics. Now let’s explore some of the different ways you might encounter a fox, and what they could mean.

what does it mean when you see a fox?

1. A Fox Crossing Your Path

A fox that crosses your path is bringing your attention towards it in the most direct way. That can mean that the message associated with the encounter is even more powerful. It’s the equivalent of seeing it typed in bold capital letters – and underlined!

Seeing a fox cross your path could be drawing your attention to any of its characteristics. It could be a message to put your own wisdom to use to find solutions to the problems you’re facing. Perhaps you’ve been looking for advice from others, when you hold the answers yourself.

It might be encouraging you to get smarter in your approach to a situation. Maybe you’ve felt like you’re banging your head against a brick wall. The fox may be prompting you to take time to reconsider your strategy. Generate a plan before you charge into action!

The fox could also be drawing your attention to some element of trickery in your life. Perhaps someone near to you is being less than honest.

An alternative interpretation is that a fox crossing your path refers to events in the future. The road ahead is often seen as a metaphor for things yet to come.

The core message could be the same – encouraging you to be smart or to beware of someone else’s cunning behavior. But rather than referring to events in your life now, it could refer to a situation in the future.

That, of course, adds an extra degree of complexity to working out the meaning of your fox encounter!

But the best guide here is your own intuition. Test out whether any of the possibilities chime with you now. If they do, great. If they don’t, it may be that the message will make sense in the weeks or months to come. 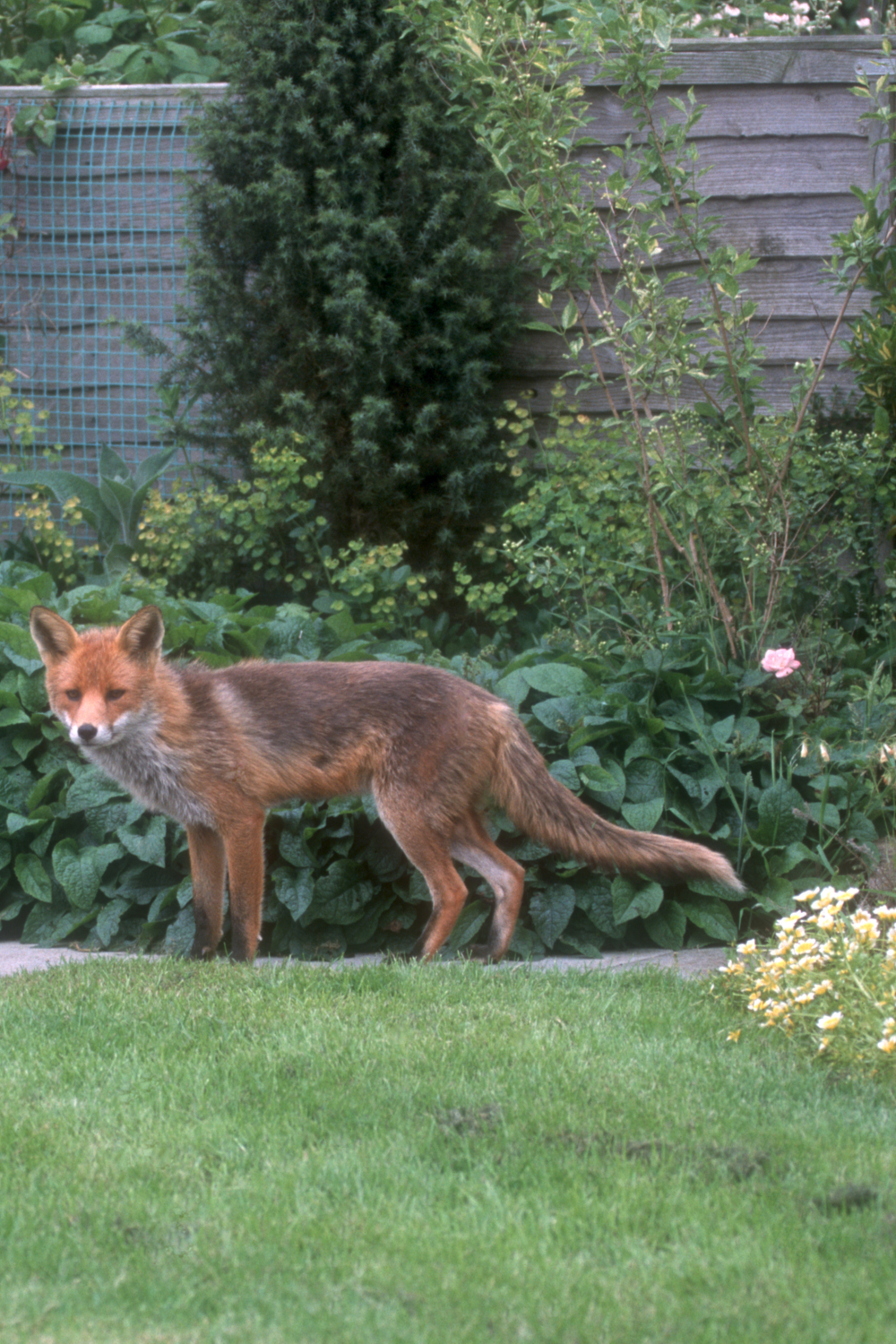 Our home is our territory and our sanctuary. So if you see a fox in your yard, it may be linked to a message about your domestic situation.

The behavior of the fox and your emotional reaction to it are key to divining the meaning.

Was the fox relaxed, perhaps even taking a nap? If so, your home is a place of calm spiritual energy. It’s somewhere you too can relax and rejuvenate.

If the fox was playful, it’s another positive sign, in this case of joy in your home life.

But if the fox was destructive, the meaning may be less positive. Check in on your emotional response to the fox too. Were you anxious, angry or intimidated? If any of these apply, they may reflect stresses and anxieties at home.

If that’s the case, the appearance of the fox may be prompting you to seek respite. Is there any way to take a break somewhere else, even if only for a day or two? Another environment may help you to replenish your energy levels.

An encounter with a young animal that felt important could be a sign of your spiritual development. Just as the fox cub is developing its distinctive traits, so your psychic awareness is growing. This meeting could be a message to reflect on and nurture this growth.

But other interpretations are possible too. Some people believe that fox cubs represent new opportunities.

Although subtly different, this too links to the message of development. These opportunities will be a chance for you to learn and grow. That growth could relate to spiritual matters. Or it could be concerned with intellectual or emotional development, or with material success.

Sometimes the same new opportunity could bring growth in all these areas. A new job, for example, could offer you intellectual stimulation, new relationships with colleagues, and a higher salary.

Seeing a dead animal can be an upsetting experience. But if you’ve come across a dead fox, remember that the spiritual message around death is one of transformation. While one phase of your life may be coming to an end, a new one may be beginning.

Even positive change, however, can be difficult to navigate. The fox may be a reminder that it is okay to give yourself time to grieve for what has passed. That may mean giving yourself a period of solitude and introspection before you are ready to move on.

Conversely, seeing a dead creature can also signify something in your life that has become stagnant. The dead animal can no longer develop and grow.

Consider whether there is anything in your life that has ceased to bring you joy or fulfillment. That might be a job, a relationship, or even somewhere you live. If it’s no longer adding to your experience of life, perhaps it’s time to consider making a change.

5. A Fox of a Particular Color

Colors often have different associations. If the color of the fox you saw stood out to you in some way, it could be significant.

Brown, on the other hand, is traditionally linked to domestic life. If your fox’s coat was more chestnut than red, the emphasis could be on feminine energies. That might be connected to relationships with important women in your life, such as your mother.

Gray is often seen as a color of ambiguity, and is linked to psychic powers. If you saw a silver fox, the message may link to exploring your own intuition, and possibly to psychic gifts.

If you saw an Arctic fox, the chances are you were either at the zoo or on a pretty amazing vacation! But the pure white fur is thought to carry its own specific meaning. White is associated with divinity, and a sighting of a white fox could relate to divine connection. 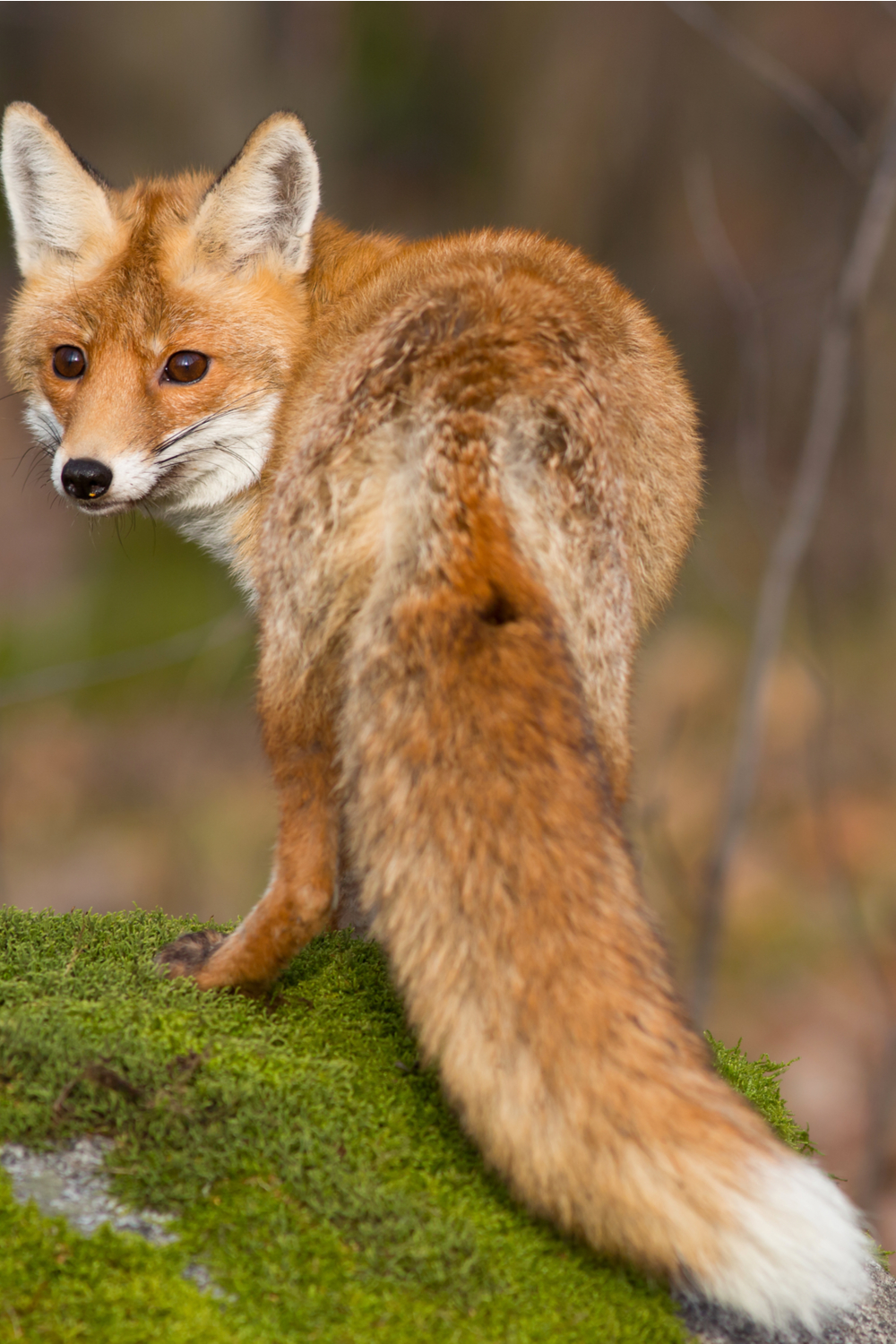 If you caught a glimpse of a fox’s tail, known as its brush, this too could carry a particular meaning.

Animals use their tails to balance, and the fox is no exception. So sightings of a fox’s tail could relate to the need for balance in your own life. That could be balance between work and leisure, or between logical thinking and emotion.

As we’ve seen, the symbolism related to foxes can have positive and negative connotations. Seeing a fox’s tail can also be a message to take a balanced perspective on a situation. Rarely is anything entirely good or entirely bad.

This encounter could be a reminder that even difficult circumstances may hold promising opportunities.

7. A Daytime Encounter with a Fox

Foxes are primarily nocturnal creatures. Seeing one in the daytime is pretty unusual – and it might mean this is more than a chance meeting.

Night-time is traditionally associated with the psychic realm, with emotion and with intuition. The day is the time for the material world, reason and logic. The daytime appearance of a fox, then, could be a prompt to draw on your instincts in your daily life.

Perhaps you’ve been worrying away at a problem and haven’t been able to find a solution. The message could be to listen to your gut. It may be that deep down you already know the right way forward.

The Dual Symbolism of Foxes

That brings us to the end of our look at the spiritual meaning of foxes. These beautiful and fascinating creatures are associated with both positive and negative characteristics. And the details of your meeting can be important in interpreting their message to you.

We hope our look at a range of different scenarios has helped you explore the meaning of your fox encounter.

But remember – your experience won’t be exactly the same as anyone else’s. So above all, meditate on your own feelings and response to find the key to its spiritual message. 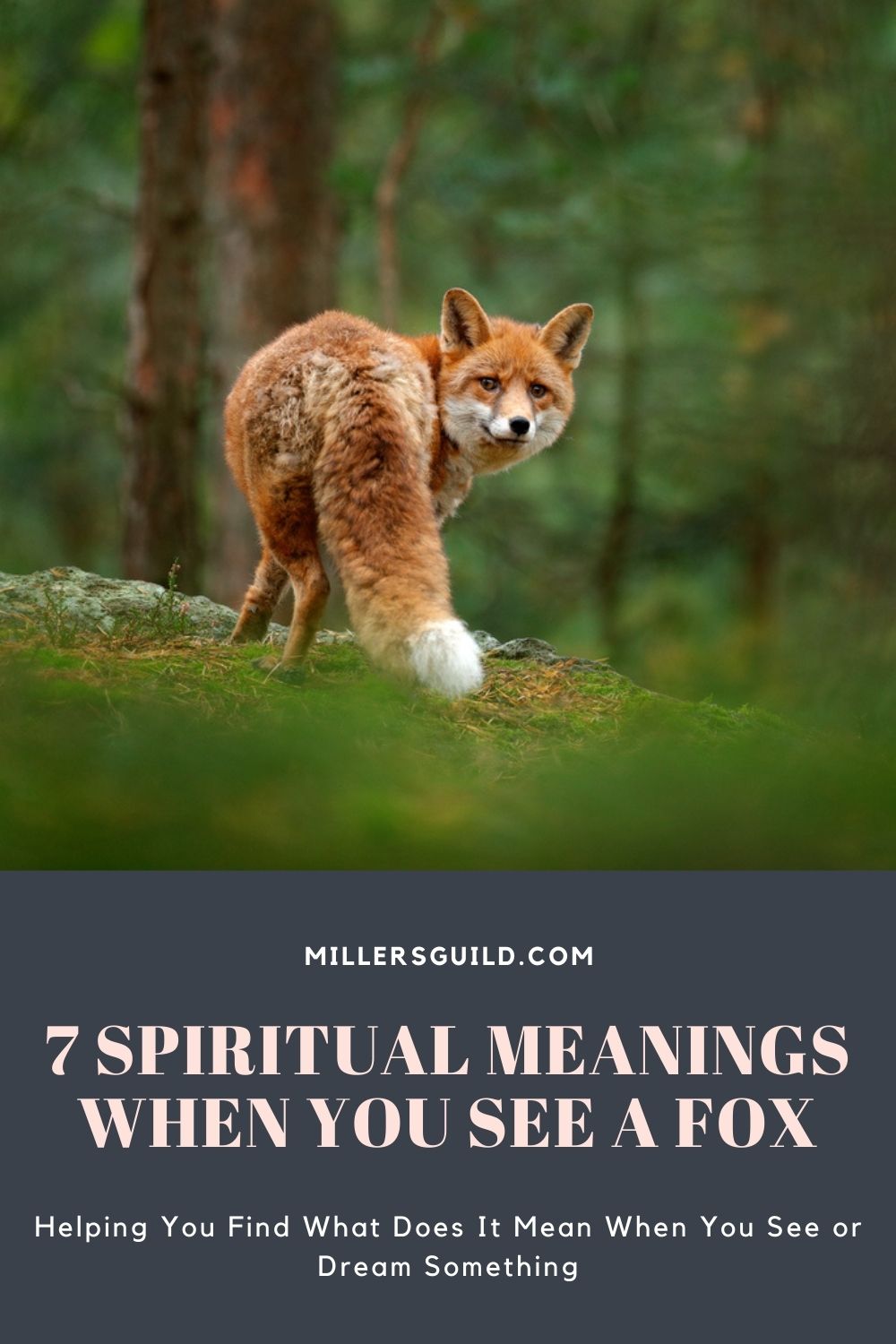 2 thoughts on “7 Spiritual Meanings When You See a Fox”