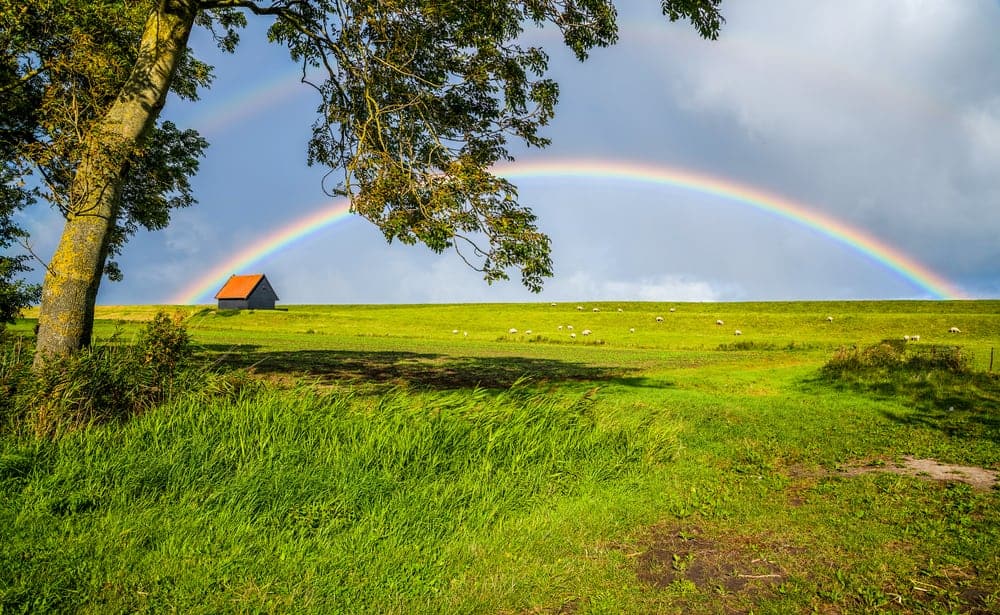 Rainbows are among the most glorious and wonderful of the Earth’s natural phenomena. When we see one, we gaze in wonder at its beauty – and many people may experience deep feelings of spirituality too.

What have rainbows meant to various cultures around the world through the ages? And what does it mean if you see one? In this post, we’ll answer these questions and more as we discuss everything you need to know about rainbow symbolism and signification. 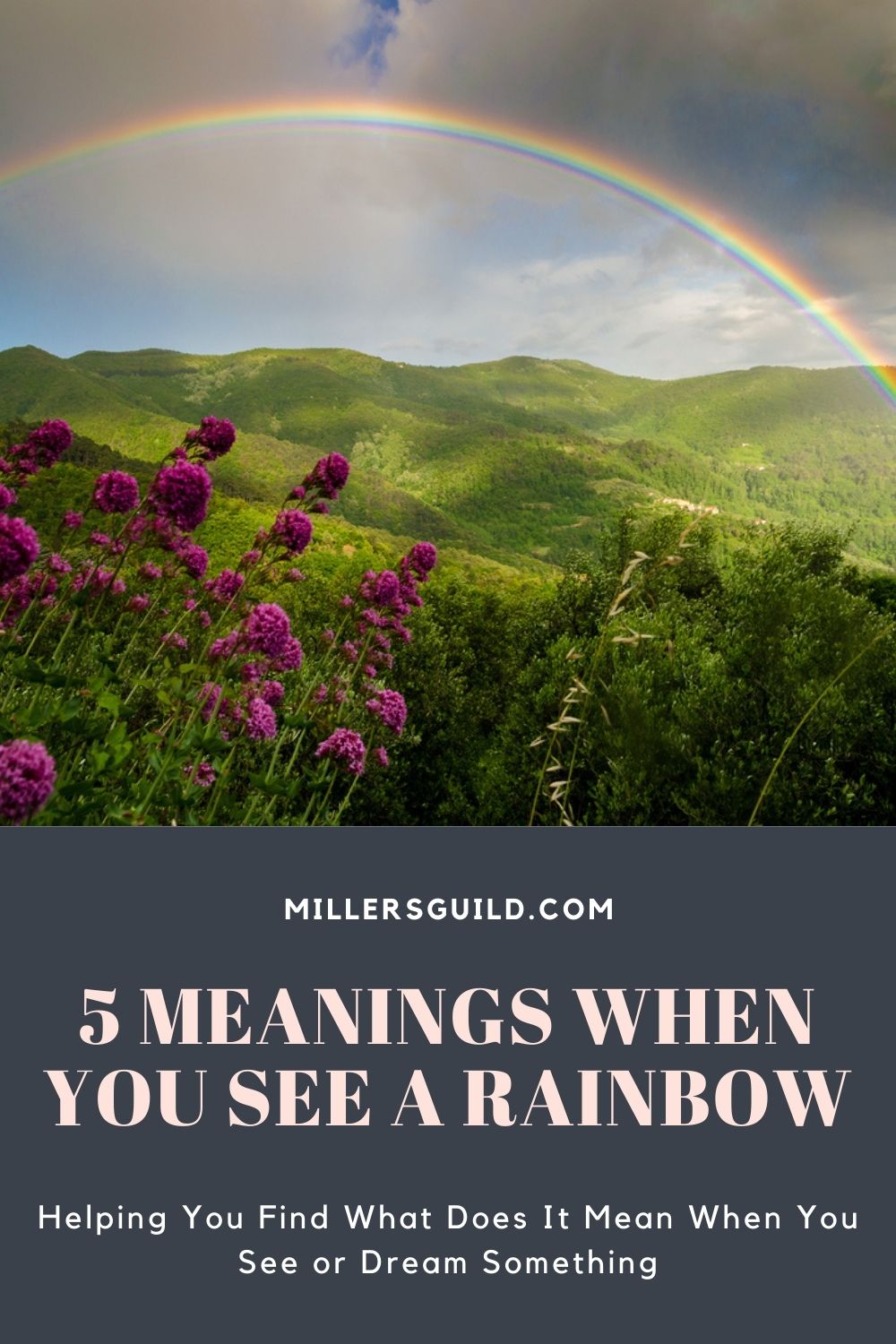 What do rainbows mean to us In Life?

Before we look at what rainbows symbolize according to various cultures around the world, let’s talk about what people think of when they see a rainbow and what they associate them with.

Rainbows occur when light is reflected, refracted and dispersed in airborne water droplets, which results in the light being split into a visible spectrum.

They are most commonly seen after rain, so the appearance of a bright and colorful rainbow after bad weather is often associated with the idea of joyous feelings after a gloomy period and the sense that something good will always follow the dark times.

After they form, rainbows only last a short time, and this ephemeral quality coupled with the sense of wonder and mystery they inspire have always been associated with magic and the spirit world.

Rainbows are also a source of wonderment for children, and children love to draw or paint them, so as adults, when we see a rainbow, it reminds us of the innocent, carefree days of our childhood.

Finally, since we don’t usually see rainbows that often, their vibrant beauty always seems so welcome, bringing positive feelings and a sense that good luck is on the way.

As a natural phenomenon that has existed since long before human ancestors came down from the trees, rainbows will have been familiar to people around the world since the dawn of time.

Until relatively recently, people wouldn’t have known how rainbows were formed, so the wonderous arc of bright colors in the light would have seemed magical or even divine.

For this reason, it’s no wonder that rainbows have featured in the beliefs and mythologies of a whole range of cultures, so let’s have a look at some of them now.

According to the Navajo, the rainbow was a magical serpent that only brave warriors could ride, but for those who were worthy, it would take them to the spirit world where they would receive divine guidance.

The Cherokee, on the other hand, believed they were the hem of the sun’s coat.

Irish ideas about rainbows are among the best known. According to traditional beliefs, a rainbow shows you where a leprechaun has buried a pot of gold. However, since the optical effect of a rainbow never allows you to reach the end, nobody can ever find it.

According to another Celtic tradition, the arc of a rainbow was thought to resemble the belly of a pregnant woman, so rainbows were also a symbol of fertility.

Indeed, it was even thought that a pregnancy was more likely to be successful if the baby was conceived under a rainbow.

To the Vikings, the rainbow was thought to be a path between Midgard, the realm of men, and Asgard, the realm of the gods. The path was called Bifröst, and Viking warriors who were killed in battle would walk the path on the way to Valhalla, the golden hall of Odin.

In Ancient Greece, rainbows were associated with the goddess Iris. She was the personification of the rainbow and served as the messenger of the gods. She was usually depicted either as a rainbow or a beautiful woman with wings.

Like the Vikings, the Japanese believed that rainbows were bridges to heaven. In a Japanese creation myth, the male and female creators of the world descended to Earth on a rainbow and created land from the chaos of the oceans.

Rainbows also appear in Chinese mythology. According to one story, rainbows were caused by the goddess Nüwa (女娲), the creator goddess, who patched up the sky with five colored stones after it was torn apart in a great battle between divine beings.

According to another myth, rainbows were a double-headed dragon that carried messages from the physical world to the spirit world. First, the message was passed from Earth to one head. Then it was relayed to the second head before finally reaching the spirit realm.

The rainbow serpent is a common motif found in Aboriginal Australian art and is usually seen as a creator god.

This god is seen as the giver of life – but also as a destroyer when angered. The details of the myth vary between the various Aboriginal groups, but it is usually associated with water and its life-giving qualities.

In Genesis, God sends a rainbow to Noah as a sign that he and all the animals can leave the Ark and that God promises never again to submerge the Earth is another great deluge. For this reason, it symbolizes God’s covenant with man as well as his great mercy and forgiveness.

In Hindu belief, the rainbow is seen as being the divine bow of Indra, the god of thunder and war.

In Buddhism, the rainbow is the second-highest state of enlightenment that must be achieved before one can reach Nirvana. In this state of meditation, all matter is transformed into pure light.

Similar to Hindu symbolism of the rainbow, in the pre-Islamic Arab world, the rainbow was thought to represent a divine bow.

According to the Mayans, the rainbow was the crown worn by the god Ixchel, a jaguar goddess who was associated with rain and midwifery.

However, according to some other Mesoamerican beliefs, rainbows were taken as bad omens, and when they appeared, people hid their children.

The Karen of Myanmar

As in some Central American cultures, the Karen of Myanmar and the surrounding areas also believe that rainbows are bad omens. They are thought to be demons who eat children, so children are hidden when one appears.

According to an old Bulgarian belief, people who pass through a rainbow change gender, which was presumably considered something to avoid.

This is somewhat ironic when we consider the modern symbolism of the rainbow and what it has come to represent.

Right up until today, the rainbow has continued to be used as a symbol, so let’s have a look at what it represents now.

After the abolition of apartheid, South Africa became known as the “Rainbow Nation”, a term of unity coined by Archbishop Desmond Tutu to represent the diverse peoples who all call themselves South Africans.

The symbol of the LGBTQA+ movement

Perhaps the most prominent use of the rainbow today is by the LGBTQA+ community as a symbol of unity and inclusion. The colors of the rainbow represent the diversity of LGBTQA+ and the acceptance of all people, no matter their sexual orientation.

The use of the rainbow flag began in San Francisco as a symbol of gay pride, and the original version had eight colors, each representing a specific meaning. They were as follows:

Since the original design appeared at the end of the 1970s, many other variations have also been used.

Symbol of hope during the covid pandemic

Most recently, the rainbow has been used as a symbol of hope during the covid pandemic.

Starting in Italy, it began appearing in windows, often accompanied by positive messages that everything will turn out ok in the end. This was an important sign of encouragement for young children to see while they were shut up indoors during lockdowns.

The rainbow is an apt choice of symbol for this since it represents joy and bright colors as the sun shines through after a period of darkness.

what does it mean when you see a rainbow?

Rainbows have had deep symbolism to many people, both in ancient societies and those of today. But what does it mean if you see a rainbow?

Seeing a rainbow can have many interpretations, but they are almost always positive.

If you see a rainbow, you should search within yourself, perhaps through meditation or deep thought. Consider what you were thinking about when you saw the rainbow as well as any issues or questions you have in your life at the moment.

That way, by trusting your intuition, you will be able to find out what message seeing a rainbow has for you.

Here are some of the common meanings seeing a rainbow can have:

In many cultures rainbows are seen as signs of good luck or that good news is on the way, and if you see one this could be the simplest explanation.

It is common to have an uplifting feeling when you see a rainbow, and many people believe that if you see one, something good is about to happen.

This echoes the Irish tale about leprechauns and pots of gold – although it’s unlikely to mean you’re going to find a literal pot of coins!

2. Hope that something good will happen

After a dark thunderstorm, rainbows often appear, and when this happens, it may bring you a message of hope.

Is something in your life causing you to feel sad or despair? Do you feel like the bad times will never end?

If you feel like this and then see a rainbow appear, it may be a message that you shouldn’t give up hope because the good times will come again as surely as the sun always follows the rain.

A similar message could be about a new beginning in your life. It could mean that a new phase in your life is about to start – and that you should approach it with a positive outlook to ensure you make the most of the opportunity.

On the other hand, it could mean you need to take be proactive in taking the first step in bringing change to your life.

Is there something you know you want to do but are hesitant to do it because you don’t know how it will turn out? Then take the rainbow as a positive sign and have confidence in the changes you want to make.

Rainbows are seen as signs of peace, so seeing one can mean that it’s time to bring more peace and tranquility into your life.

Is there someone you’ve fallen out with? Or are you involved in a family feud? Then seeing a rainbow could well mean that the time has come to make peace since life is too short to hold grudges.

5. Time to reflect on the spiritual side of life

With their ethereal, mystical nature, rainbows are also closely associated with the spirit world, and seeing one could be a message to you from the other side that you are neglecting spiritual matters to concentrate too much on material things.

Are you taking enough time for spiritual exploration and development? If you see a rainbow, it could be a reminder that this is a side of your life that needs more attention since we all need to balance the spiritual and the material to enjoy a happy and fulfilled existence.

Rainbows have been seen as an almost universally positive omen by people all around the world, so not only are they beautiful to see but they also come as a welcome sign of peace, good luck and new beginnings.

If you see a rainbow, reflect deeply on the meaning and search within yourself, and by allowing your intuition to guide you, the meaning of what the rainbow means to you will be revealed. 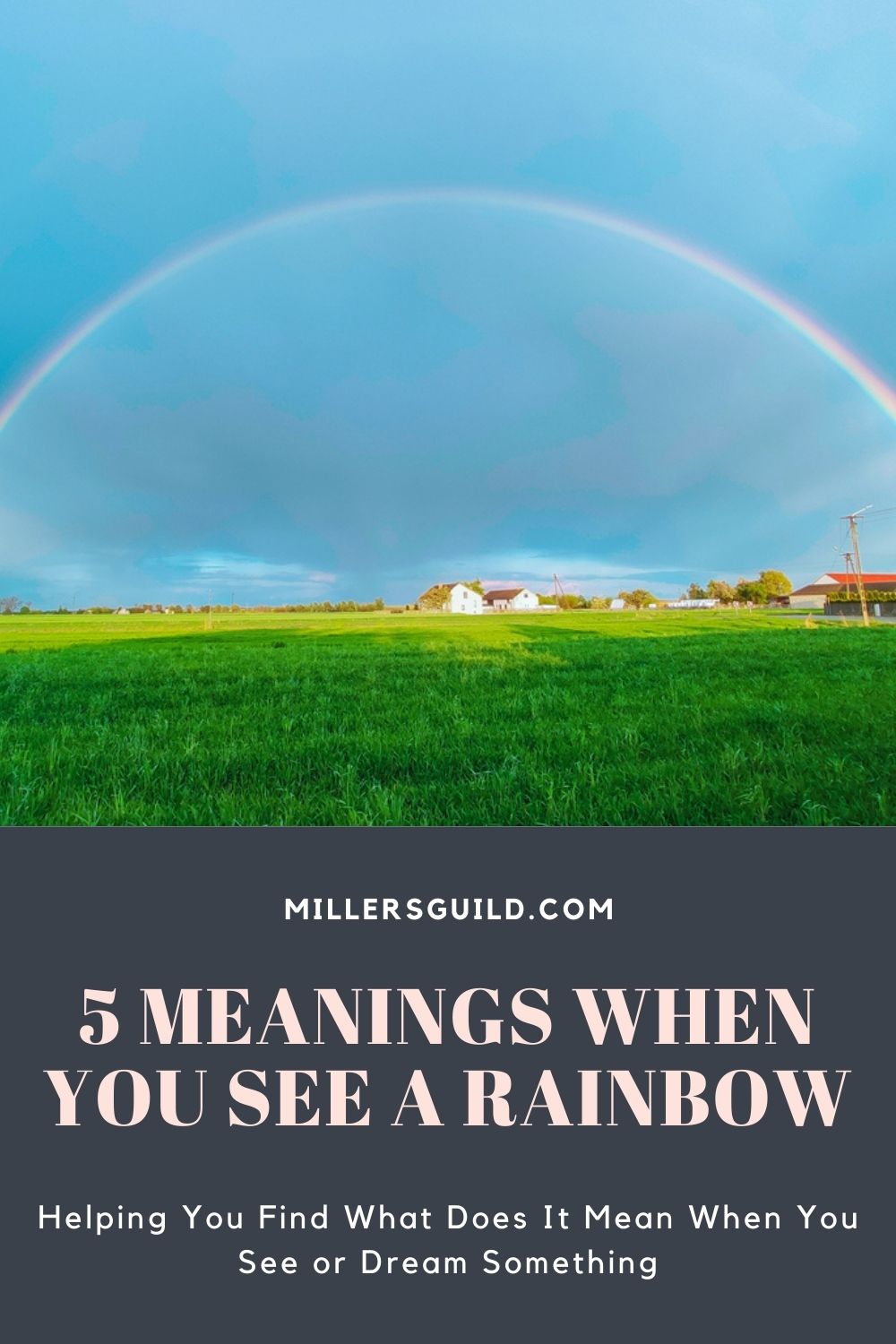 5 thoughts on “5 Meanings When You See a Rainbow”