Skip to content
Miller's Dream & Symbolism » What Does It Mean When the Moon is Orange? (Spiritual Meanings & Interpret) 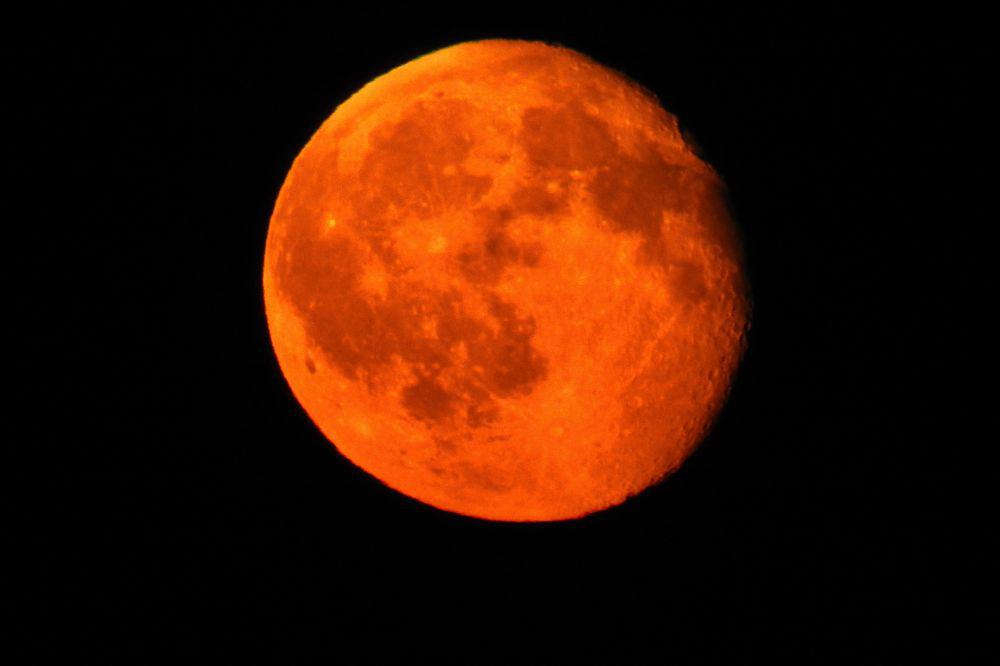 Seeing a large orange Moon hanging near the horizon is an unforgettable sight, but there’s more to it than just a beautiful natural light show in the sky.

To help you understand the spiritual significance of this natural spectacle, in this post, we answer the question, what does it mean when the Moon is orange?

What is the scientific reason for an orange Moon?

Have you ever watched a sunrise and noticed how the first colors you see while the Sun is still close to the horizon are pinks and reds and deep oranges? But after that, as the Sun begins to rise into the sky, these colors are gradually replaced by lighter shades of orange and yellow.

We now know that this is because as the Sun’s rays pass through the Earth’s atmosphere, the spectrum of colors is separated and filtered.

While the Sun is close to the horizon, colors with short wavelengths like blue are filtered out, leaving only those reds and oranges at the start of the sunrise.

It is only later, when the Sun is higher in the sky, that the full spectrum of colors becomes visible, which is why the Sun and the light it gives off seem to change.

The same effect is also responsible for orange Moons.

The Moon doesn’t give off any light of its own but rather reflects the light of the Sun. When the light from the Sun reaches the Moon directly, the whole spectrum is present, which is why it looks white.

However, when the Moon is low on the horizon, the Sun’s rays pass through the Earth’s atmosphere before reaching the Moon, and again, the colors with short wavelengths are filtered out, leaving only the oranges and reds.

And this is why at certain times when the Moon is low in the sky, it appears orange.

In the past, people must have stared up at orange Moons and wondered what it meant.

However, just because we understand the science behind why the Moon sometimes appears orange, it doesn’t invalidate those older spiritual interpretations – so let’s have a look at some now.

What Does It Mean When the Moon is Orange?

1. The start of a new season

One of the most important and impressive orange Moons of the year is the one known as the Harvest Moon, the last full Moon before the autumn equinox.

Traditionally, farmers took advantage of the light of this spectacular Moon to work into the night gathering the harvest, hence the name. After the harvest, the season changed, and people knew winter was on its way.

For this reason, an orange Moon can represent the start of a new season, period or cycle in a metaphorical sense too. It symbolizes a new beginning, and if you see an orange Moon, it could be a sign that a new phase in your life is about to start.

After the harvest under the glowing orange Moon, people traditionally busied themselves with preparing for the hardships of the coming winter, and another metaphorical meaning of an orange Moon is as a symbol of hard times ahead.

We all face ups and downs in our lives, and when we encounter difficult periods, we have to ride them out as best we can.

However, they always come to an end, and we always emerge from the other side like new plants or animals in the springtime.

We can better endure the hard times by preparing ourselves as well as possible, and an orange Moon serves to remind us of this.

Remember, however bad things get, as long as we persevere and don’t lose heart, things will eventually get better again.

3. Prepare for unforeseen events and take advantage of opportunities that arise

Orange is close to red, the color of blood, war and passion – indeed, the orange Moon is sometimes referred to as a “blood Moon”. Red is also the color of chaos and uncertainty, so an orange Moon warns us to be prepared for unforeseen events in the future.

However, chaos and uncertainty can also present new opportunities as they force change upon us, and those that are ready to grasp those opportunities can benefit greatly from periods of uncertainty.

This is why an orange Moon can remind us to keep on our guard against unwelcome situations that are beyond our control – but also to be aware of any positive opportunities that present themselves so we don’t let them pass us by.

An orange Moon can tell us that change is on its way, but rather than fight it or be afraid of it, we should be ready to embrace it since change is a constant in the world, and if we don’t change and evolve, we are only standing still.

As we just noted, red is the color of passion, and passion can lead us to irrational behavior and emotional thinking.

However, being led by strong emotions such as fear, anger or even joy or love can cause us to make bad decisions, so at the time of the orange Moon, it’s a good idea to take a step back and remain cool rather than rush into any decisions we might later regret.

At the time of the orange Moon especially, it’s a time to keep our wilder emotions in check, but the orange Moon can also serve as a reminder that this is good advice at any time.

Unlike the bright and illuminating Moon we see for much of the year, an orange Moon is dim and obscure, and as such represents spiritual confusion and confusion in our lives.

The time of the orange Moon may be a time when we question the paths we are taking, and sometimes we can experience doubts over the direction of our lives.

However, this mysterious time of the orange Moon is also a particularly good time for meditation and thought and for asking deep questions of ourselves because when an orange Moon is in the sky, we often find that the answers to our questions are revealed.

As a result, this is also a perfect time for spiritual exploration and growth because the spirit realm is seldom more attainable.

We’ve already seen that the Harvest Moon was a last chance for farmers to work through the night, gathering in the last of their crops before winter.

This means the orange Moon has also come to symbolize other last chances, reminding us that it’s never too late to do something.

You might have a dream or an ambition that you always wanted to achieve, but now, you believe that it’s too late, that you’re too old and that your chance has passed you by.

In this case, the orange Moon is there to tell you that there’s still time for you to realize your dream and that nothing should stop you from trying.

When you see an orange Moon, take this message to heart because your goals are still possible, even if you thought you’d missed your chance.

7. A bad omen, destruction and the coming apocalypse

Unsurprisingly, in many cultures that didn’t understand the scientific causes of orange Moons, the appearance of an orange Moon was seen as a bad omen, prophesying destruction or even the end of the world.

According to the Inca, when the Moon turned orange, it was under attack by a giant jaguar who was trying to devour it. They were afraid that after it had eaten the Moon, it would then turn its ravenous jaws on the Earth.

To save themselves, they made a lot of noise to scare the jaguar away – and once the Moon returned to normal, they honored their gods to give thanks.

8. Look at things from a different perspective

When we see an orange Moon, the color comes from our position on the Earth and our perspective – but in fact, the Moon doesn’t change color at all.

This should remind us to always look at things from different perspectives if we want to gain a full understanding of a situation because looking at something from a single viewpoint can never give us the whole picture.

9. Completion and the cyclical nature of the universe

We started by saying that the orange Moon represents the start of a new season, a new beginning and the start of a new cycle, but at the same time, it symbolizes the end of the old cycle and the completion of everything that went before.

This means the orange Moon can remind us to take stock of everything we’ve achieved so far and to be proud of the things we’ve done before we take a deep breath and boldly tread our path into the future to face whatever it may hold without fear.

Many spiritual meanings, even if we now understand the science

We may now understand the science behind why the Moon sometimes appears orange, but that in no way detracts from the spiritual meaning of the event.

Orange Moons have held particular significance for many cultures, and when the Moon appears orange, it’s still a deeply spiritual and mysterious sight to behold.