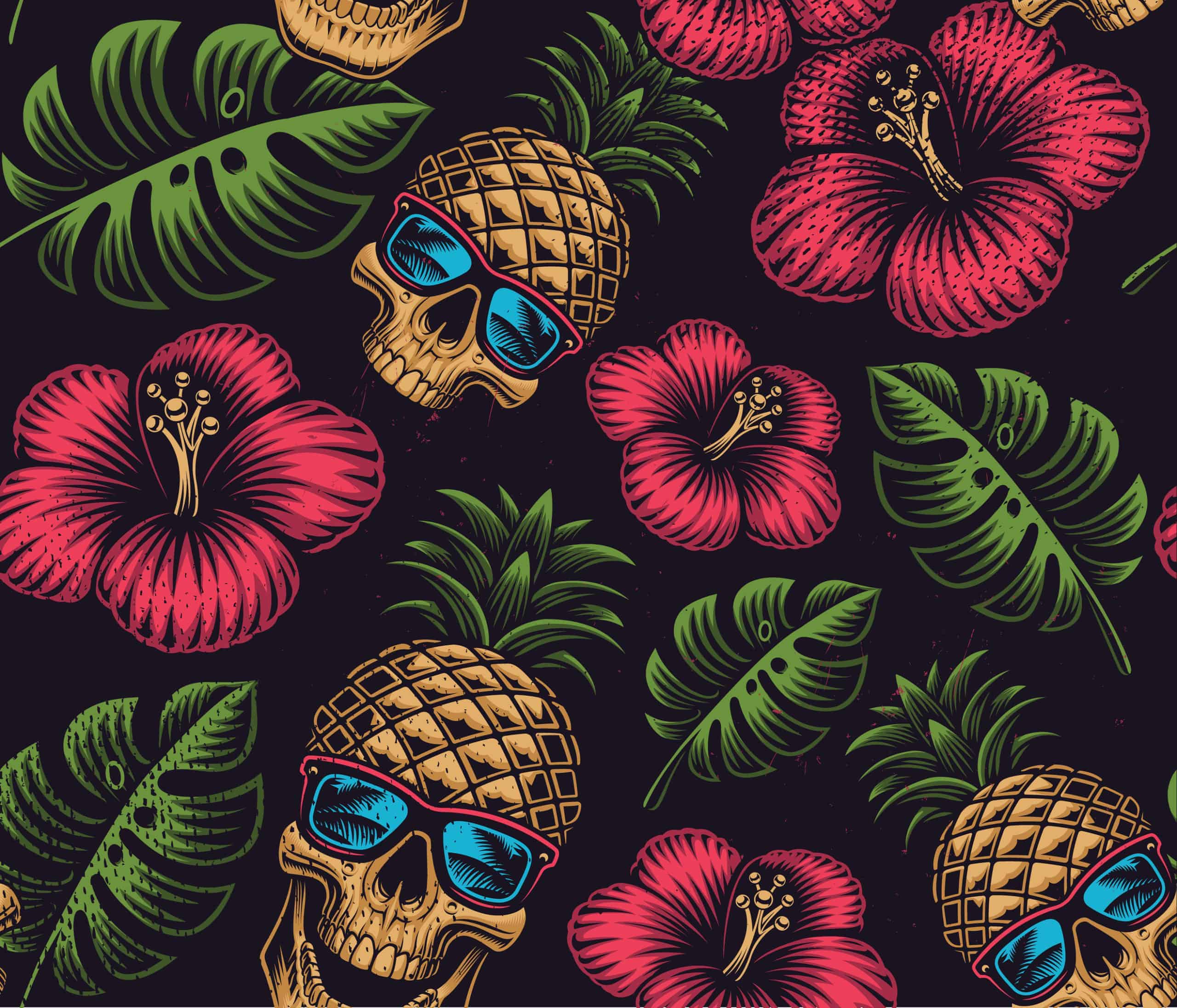 Pineapples are irresistibly delicious, and most people associate them with sun and beaches, piña coladas, Hawaiian pizzas and everything else tropical and exotic.

They also have a surprising history, and while they might not have any deep spiritual meaning, they have represented many things to different people down the centuries.

So for anyone who wants to learn more, in this post, we discuss pineapple symbolism – and one of the meanings we mention is something you would probably never guess! 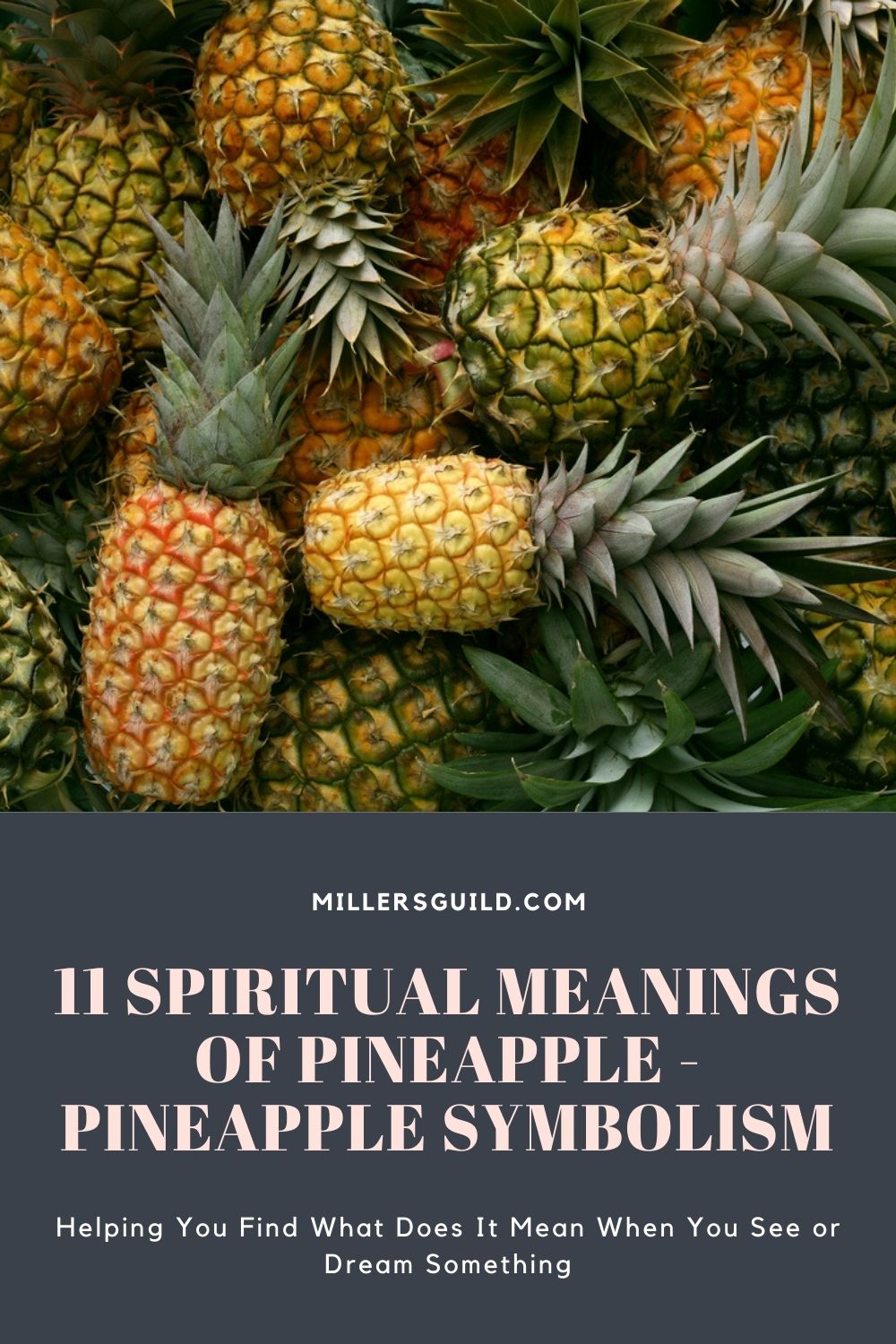 The history of the pineapple

The pineapple is a familiar and almost mundane fruit to us nowadays. We think nothing of seeing them on display in a grocery store and are used to popping them into our shopping carts all year round. But it wasn’t always like this.

The pineapple has a more interesting history than you might imagine, and at one time, they were highly sought-after in certain parts of the world and were out of reach for all but the super-rich.

For a long time, it certainly wasn’t just a “normal” fruit that just anybody could expect to eat, so before we look at the symbolism, let’s have a look at the story behind this juicy and delicious delight.

Where do pineapples come from?

Pineapples are thought to originate in the Paraná River area of what is now Brazil and Paraguay.

The pineapple was probably domesticated sometime before 1200 BCE, and cultivation spread throughout tropical South and Central America.

The first European to see a pineapple was Columbus – supposedly on 4th November 1493 – on the island that is now Guadeloupe.

One of the first peoples to cultivate pineapples were the Tupi-Guarani, who lived in the area of modern-day Sao Paulo state.

When a French priest named Jean de Léry visited the area around 75 years after Columbus’ voyages, he reported that the pineapple seemed to have a symbolic value for the people there, unlike other items that just served as food.

When Columbus sailed back to Spain, he took some pineapples with him. However, due to the long voyage back to Europe, most of them went bad, and only one survived.

This, he presented to the Spanish king, Ferdinand, and the whole court was amazed by this wonderful exotic fruit from far-away lands. This started a craze in Europe for pineapples, and the huge demand saw them fetch astronomical prices.

This was because it was prohibitively expensive as well as extremely difficult to bring them back from the Americas – but at the same time, with the technology of the day, it was all but impossible to grow them in Europe.

Learning how to grow them

Pineapples were even successfully grown on the estates of Catherine the Great of Russia from 1796.

The problem was, growing pineapples in temperate European countries required the use of hothouses – pineapple plants don’t tolerate temperatures below around 18°C (64.5°F).

This means it cost almost as much to grow them in Europe as it did to import them from the New World.

Pineapples in other parts of the world

However, other parts of the world were more suitable for pineapple cultivation, and plantations were established in India by the Portuguese and in the Philippines by the Spanish.

The Spanish also tried growing pineapples in Hawaii from the start of the 18th century, but commercial cultivation didn’t begin there until 1886.

Back then, pineapples were made into jams and preserves since they were easier to transport that way – and then later, when the technology allowed, they were also canned for export.

Hawaii was dominant in the pineapple trade until the 1960s, after which production dropped off, and it is no longer a major area of cultivation.

Nowadays, the world’s largest grower of pineapples is the Philippines, followed by Costa Rica, Brazil, Indonesia and China.

The symbolism of pineapples

With such an interesting history, it is no wonder that the pineapple has symbolized different things to different people at various times down the centuries, so let’s look at that in more detail now.

When the first pineapples began arriving in Europe – and when a handful also began to be grown there at great cost – they were seen as the ultimate luxury item, and the very richest members of society used them as a way of displaying their wealth, power and connections.

Pineapples were so valuable that they were not served as food but rather were used as decorative pieces. One pineapple would be used again and again until it started to go bad, and the sole purpose was to impress guests by the lavishness and opulence of the display.

For those who couldn’t afford to buy pineapples for their functions, it was even possible to rent one for the day as a way of saving face. This just goes to show the extent to which pineapples symbolized wealth and power in the years after they first arrived in Europe.

Later, when the technology became available, people began to cultivate their own. However, they needed year-round care and were highly labor-intensive to grow, and as a result, it was hardly cheaper than importing them.

This meant that having the resources to be able to grow pineapples in Europe was just as ostentatious a sign of wealth as being able to import them.

Perhaps the best example of this was a hothouse known as the Dunmore Pineapple built by John Murray, 4th Earl of Dunmore in 1761.

The most prominent feature of the hothouse is a 14m (45ft) stone cupola in the shape of a giant pineapple, a building clearly designed to show off the extravagance of being able to grow these tropical fruits in Scotland.

As pineapples came to symbolize wealth and decadence, they also came to be seen as representing “the best”, and certain expressions related to pineapples became common in the speech of the time.

For example, in the late 1700s, people would commonly say that something was “a pineapple of the finest flavor” to describe something of the utmost quality.

In the 1775 play The Rivals by Sheridan, one character also describes another by saying “he is the very pineapple of politeness.”

Nowadays, it’s hard to imagine what seeing such a rare and unusual fruit for the first time must have been like, but it’s easy to imagine how it would have symbolized all that was exotic and unknown about the far-off lands that were being discovered.

When pineapples were brought back to places like England, France or Spain, they would also have represented the successful colonial conquests of new lands.

Although nowadays, the colonial period is no longer viewed in a positive light, back then, symbols of overseas conquests would have been sources of great pride, and pineapples symbolized power and success in colonial ventures.

When the first Europeans arrived in the Americas, they supposedly saw that some of the locals hung pineapples outside their homes, supposedly as a sign of welcome.

The idea was that the pineapples let guests know that they were welcome to visit, and the pineapple left a pleasant odor in the air for those that called by.

It is possible that these stories are apocryphal, or perhaps the European explorers and colonists misunderstood why pineapples were placed outside people’s homes.

However, as we have seen, when pineapples were brought back to Europe, they were used by hosts to show off their wealth – and at the same time, they came to symbolize hospitality.

After all, if the host was willing to lavish such an expensive fruit on his or her guests, then this was surely the sign of a generous welcome, and so aside from the rather crass showing-off of one’s wealth, pineapples also became associated with generosity and friendliness.

According to another story, sailors – or perhaps just the captains – returning from voyages to distant lands would hang pineapples on their doors, much as the South American natives are supposed to have done.

The idea is that this was a way to tell neighbors that the adventurer had returned safely and that they were welcome to visit and hear tales from the seafarer’s exploits abroad.

Since pineapples were so expensive, it is little wonder that they quickly became associated with royalty – since kings, queens and princes were among the only people who could afford to buy them.

In fact, King Charles II of England even commissioned a portrait of himself being presented with a pineapple, so valuable and prestigious were these fruit – as amusing as this may seem to us now!

There’s another reason pineapples were associated with royalty, and that’s their shape – due to the way they grow, they almost look as though they are wearing a crown, which is part of the reason they were once known as the “king of fruits”.

The English explorer and statesman Walter Raleigh, on the other hand, named the pineapple the “princess of fruits”. This was undoubtedly an attempt to win favor with his patron, Queen Elizabeth I of England.

Philosophers have been arguing about the concept of beauty for thousands of years, but many, including Aristotle, believed that attractiveness came from order and symmetry. Later, St Augustine also contended that beauty was derived from geometric form and balance.

In any case, pineapples display many of these features, with a pleasing symmetrical shape and the lines of “eyes” running around the skin. The leaves on the top even follow the Fibonacci sequence, so pineapples are mathematically perfect too.

To the tribes in the areas where pineapples were first cultivated, it has been suggested that these fruit symbolized virility and manhood.

This was because it took great strength to pull the fruit from the plant, and strength and determination were also required to break through the tough skin to reach the fruit inside.

According to the Aztecs, the pineapple was also a symbol of war since the Aztec god of war, Vitzliputzli, was sometimes depicted carrying pineapples.

Early on in the history of the US, pioneering planters attempted to grow pineapples on their estates, and to them, this represented their independence and their ability to do things by themselves.

Although the efforts were not especially successful since, just as in Europe, they could not be grown without intensive labor and hothouses, they were a small symbol of defiance against the former colonial power.

Later, pineapples became a common centerpiece on Southern tables during Christmastime, so once again, they came to represent welcome, hospitality, neighborliness and good cheer.

Although Hawaii is no longer a major producer of pineapples, this fruit came to be so closely associated with the islands that it is still seen as a Hawaiian symbol.

The Hawaiian pizza is also famous all over the world – and ham and pineapple is perhaps the most controversial and contentious pizza topping that has ever been invented!

Before you decide to buy any clothing featuring pineapples, get a pineapple tattoo or incorporate pineapples into any architecture or home embellishments, there’s another meaning of pineapples you should be aware of.

It turns out that pineapples are also used as a symbol by swingers. As in, “people who engage freely in sex”.

According to one couple’s story, they had bought matching pineapple swimwear for an upcoming cruise, only to find out that lots of people kept approaching them and were being extra-friendly.

It was only later that they realized the pineapple is used as a sign by swingers to advertise themselves to others with similar interests – so this is something to bear in mind before you start wearing or displaying pineapples in public!

So as we have seen, pineapples are an iconic fruit that has many different meanings, but almost all of them are positive.

Once they were seen as a luxury that only the richest could afford, but now they are most commonly associated with welcoming and hospitality – as well a few other more surprising things! 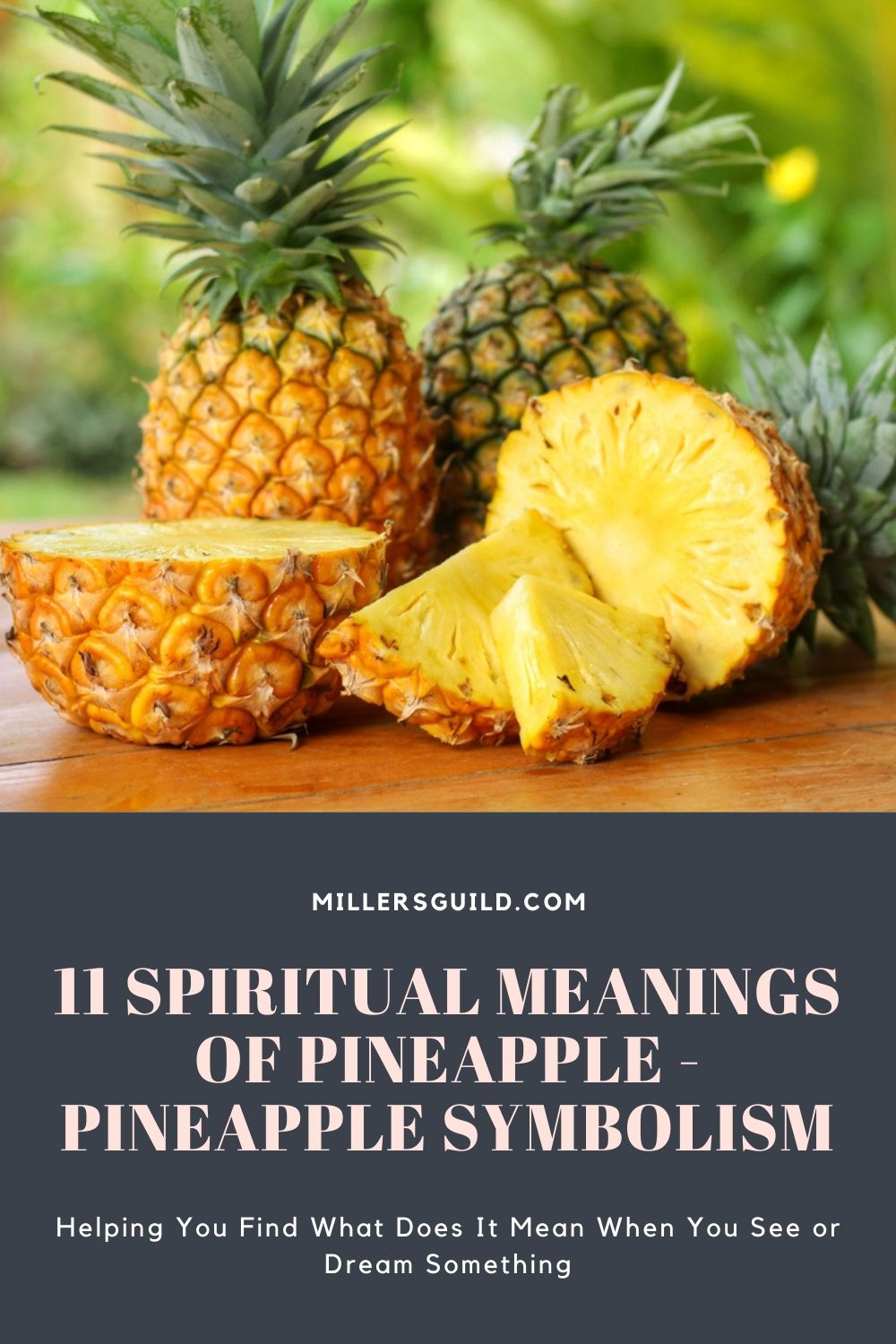