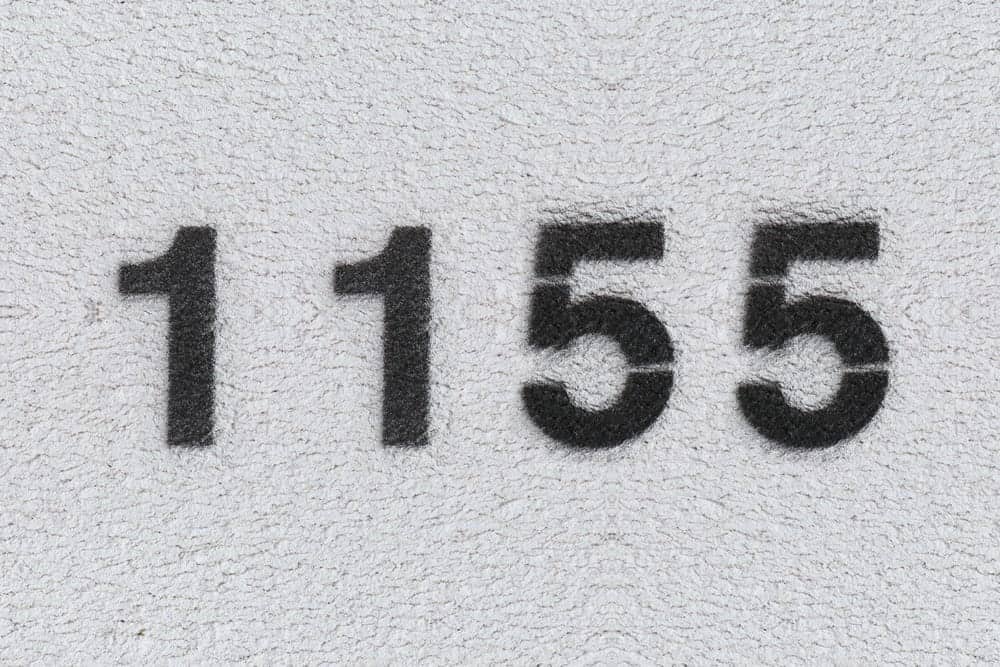 When Angel Numbers have doubled numerals, the message they send gets bumped to the top of the pile. So when you have a number like 1155 – which is a double-double – you know your higher helpers are serious in their communication! But what exactly are they saying? 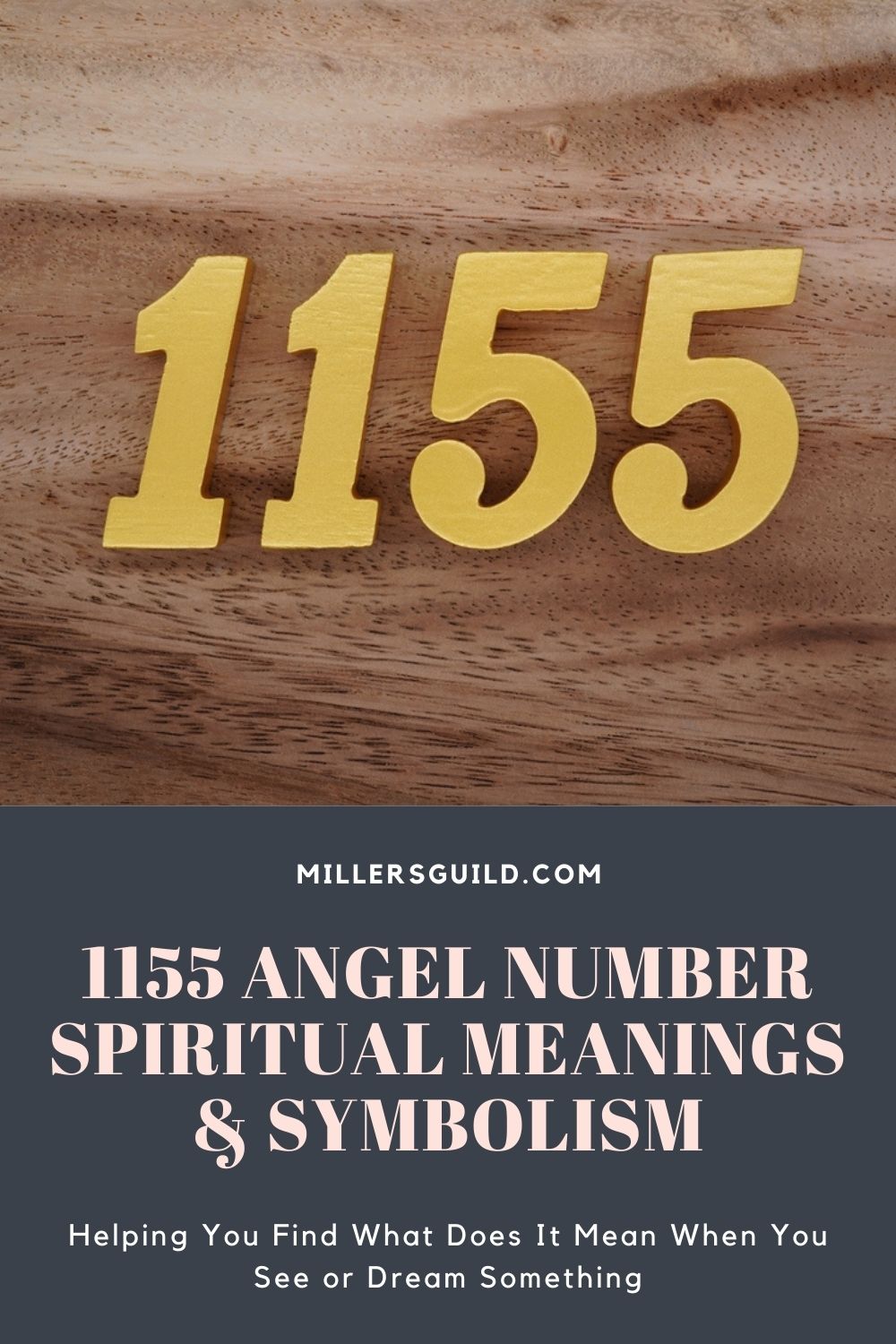 In both practical and ethereal settings, 1 is the number of beginnings. And because the 1 is doubled, it means this new project, task, or phase is significant and immediate. Incidentally, the 5 here suggests commencement as well. How so? Well, 5 is the middle child of numerals.

It’s right between 0 and 9. And because 4 often represents complete cycles, 5 is a pseudo-one, marking a second phase after 1 to 4. So that double 1 and double 5 combine to confirm the launch of something meaningful. Because the numbers are repeated, it’s coming soon.

Apart from marking the start of a fresh phase, 1 is a number that signifies leadership. And once again, the call is doubled. Similarly, 5 represents a new chapter, segment, or department. Think of all the things that come in fours – gospels, apocalyptic angels, etc.

So naturally, 5 means a secondary chapter. You might see this insistent angel number if you’re reluctant to take charge. Your angels are amplifying your leadership abilities and telling you to use them. Possibly to create a new sub-section, branch, or portion at work.

They say God helps those who help themselves. And while your higher helpers are often happy to intervene and facilitate your dreams, they sometimes need you to take initiative and play an active role. This is probably why they’re sending you an angel number with two ones.

The double-one emphasizes your part in this undertaking. Your guides are saying yes, they want this for you, and the blessing is yours already. But you’re going to have to deliberately get involved in manifesting your destiny. Ask your angels exactly what they want you to do.

Angel Number 1155 is considered an advanced message from your higher helpers. This isn’t an entry-level missive. It’s for souls a little farther along their spiritual path. The double-one calls you to sit up and pay attention because this message is about you as an individual being.

The double-five refers to a fork in your path, and the invitation to join a new plane. You’ve been running along following your earthly plans. But now your spirit has the skills to pursue your true vocation. 1155 pings you to start your ethereal journey and level up your psyche.

Life can be tough and it’s easy to get discouraged. When things are especially rough, you might feel helpless and overpowered. It can feel like massive forces are batting you around and you can’t escape. Angel Number 1155 reminds you that you still have the ability to move.

You can shift things, particularly during this new season signified by the double-five. So this angel number comes as a special reassurance that you’re not as weak as you think. You’re capable of so much more than you realize, and your spirit guides know it!

There’s a gorgeous line of dialogue from Matrix IV (#NoSpoilers) where a befuddled Neo says, “I’m not doing this … are you doing this?” And Angel Number 1155 is a succinct version of that sentiment. And no, you don’t have to go watch the film to understand the reference.

If you have pets, you’ll know the drastic change between a 6-week cat or dog and a 6-month one. (For the record, cats can start having kittens at 6 months, even though they’re still babies to you!) And if you have kids, you probably have a growth chart scrawled on the wall.

It may not be much – just a designated section with pencil markings for every inch they grow. But how can you mark your spiritual growth? Because 1155 is a higher spiritual number, seeing it around a lot could be your angels confirming your intuition is improving.

When you see a 1, you know the spirit guides are directing their energies toward you. But if it’s doubled into 11, the message extends beyond yourself. 11 is a master number, which means it concerns others around you, and its effects transcend the physical and spiritual.

Meanwhile, 55 carries the vibration of change. And you could go further and reduce 1155 numerologically (1+1+5+5=12; 1+2=3). And because 55 equals change and 3 equals abundance, 1155 means big changes are coming and their effects will go way beyond just you.

Even if you’re unfamiliar with the Matric, you’ve probably heard the red-pill-blue-pill thing. For our purposes, we’ll look at it like this – everyone has physical, emotional, mental, and spiritual components to their existence. We strive to balance these four sides of ourselves.

For example, you may be deciding what to wear to a party. You love yellow and it cheers you up, but you don’t want to grab attention from the host, so you choose a subtle color. 1155 often appears when you’re facing a choice. It exhorts you to pick the path of greater good.

You know that annoying Christmas carol with the birds and the turtles and the swans? A lot of us jumble the words, but even the clumsiest lyricist knows the part about ♫ fiiiiiive goooolden rings! ♫ It gives all the singers a chance to pause, breathe, and catch up.

But that Figure 5 has a spiritual message too. That note marks a transition in the style, meter, and timbre of the song. In the same way, 1155 marks a point in your evolution when you’re metaphorically leaving the lower planes and rising to higher ground. Congratulations!

Go With the Flow

Feel your feelings. Observe and detach. What you resist, persists. What you fear, you become. And lots of other proverbs that share similar ideas. The concept here is that you should allow the natural rhythms of the world to go on. If you fight them, you will lose.

What does this have to do with Angel Number 1155? It’s the number of confirmation, validation, manifestation. And it’s a higher level number. You might spot it as a verification of another spiritual number (e.g. 32 and 1155). It serves as two-factor authentication (2FA).

One of the most common relationship errors is going out with the same person in different bodies. And sometimes, you try to outfox this tendency by consciously seeking someone that isn’t your type. You might not find them attractive, but you date them to break your pattern.

So what happens if in the midst of all this, you find yourself alarmingly drawn to a person you wouldn’t ordinarily consider? And what if you see 1155 all around them? They could be your twin flame, here to help you grow and share mutual life lessons. Keep an eye on them.

Have you heard someone described as so heavenly-minded that they’re no earthly good? Or maybe you know someone that meditated so much they lost touch with reality. Untethered exploration within spiritual realms can bliss you out as effectively as high-grade drugs!

So if your spiritual practice is extremely intense and you start seeing 1155 all over the place, you may need to pull back. Your higher self may be reveling in the experience, but you still have a physical body to contend with. You need to balance your material and ethereal life.

This meaning of Angel Number 1155 is a mixing of the two figurative halves. 11 relates to your spiritual purpose. 55 refers to transition and balance. So when you see this angel number, think about your internal attitude? Are you feeling guilty or paying penance?

Some traditions believe in reincarnation, so every life is essentially righting the wrongs of their past existence. Other religions focus more on self-flagellation. Either way, seeing 1155 means you’ve been in the dog house long enough. Forgive yourself and get off that couch.

You might have learned about the Vatican II Council which – among other things – allowed contemporary Catholics to attend mass in English and other local languages. (Previously, everything was done in Latin). This change caused a closer connection to the religion.

Similarly, many modern faiths could benefit from upgrading. But many traditional theists prefer the old-school practices that alienate the young (and queer). Seeing Angel Number 1155 could be a call to update the practices in your congregation and make them inclusive.

Stay Up to Date

As we mentioned in the previous two points, your spirit guides want you to stop living in the past and embrace the future. They don’t want you stifling yourself with outdated beliefs. Angels are already linked to all realms and timelines, so they can tap into previous centuries.

That way, they can bring you the wisdom and enlightenment you need, leaving you free to live within your era. You might see this number when you’re battling with elders or facing a dilemma between today’s interpretations of scripture and your great-grandparents’ versions.

Like Captain Planet says, the power is yours! And that’s exactly what Angel Number 1155 might be telling you. You might see this number when your confidence is lagging and you’re paralyzed by impostor syndrome. Your guardian angels are reminding you they’re watching.

They can see what you’ve done and what you’re yet to do. And they understand your potential better than anyone. So if you’re feeling shaky about your abilities, your higher helpers could send this number to let you know you’re aligned with your true purpose.

Every once in a while, you’ll notice a familiar wind blowing through the internet. It will involve buzzwords like ‘cutting off toxic energy’ and ‘leave the haters behind’. It may include tutorials on letting go of the negative people in your life. (Hopefully, you’re not one of them!)

Interestingly, the 155 in Angel Number 1155 might pass the same message. Your heavenly helpers might want you to shed people and habits that are dragging you down. It calls you to be flexible and positive as you release unwanted energy. Don’t shame the person. Just let go.

When a race is about to begin, the starter yells ‘On your marks, get set, go!’ Or they might say ‘ready, set, go!’ This is similar to traffic lights that toggle between red, amber (or orange or yellow), and green. In both these scenarios, that middle step is about tense preparation.

Angel Number 1155 can sometimes serve as a reminder to be ready for the incoming transition. You might not know what the exact changes are, but your spirit guides do. This number is their way of ensuring you don’t get caught off guard. That way, you’ll benefit fully.

Sometimes, your world goes into flux. Everything seems to be shifting around you. Your closest friends are coupling up, having babies, or getting hired overseas. Your top team is loaning out popular players and your favorite snack brand has sold its parent company!

With all these changes around you, it’s natural to feel unmoored. You’re scrambling to keep things constant and retain familiarity. Angel Number 1155 reminds you that your spirit guides are still in control. They’re running the chessboard and they want you to just relax!

The most important meaning of Angel Number 1155 is to trust your gut. As humans, it’s natural to see advice from people we trust. But if you’re dealing with a crucial decision, all those well-meaning voices might drown out your own higher purpose. Your angels know this.

Other things that might crowd your instinct include anxiety, fear of judgment, and wariness about hurting people’s feelings. If you see this number, you need to take time out and sit quietly in a place that has spiritual significance for you. You need to identify your inner voice.

When was the last time you saw Angel Number 1155? Tell us all about it in the comments! 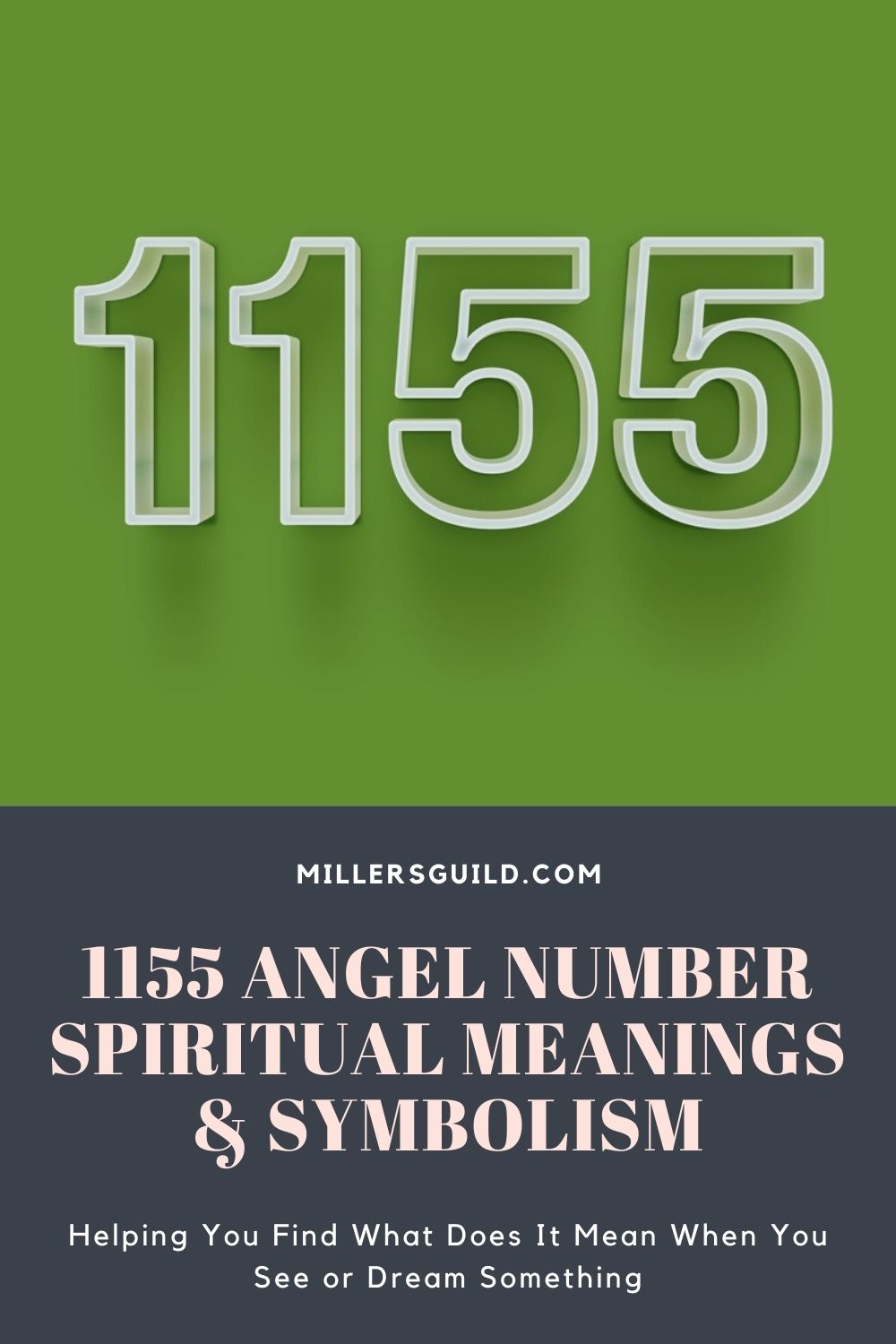 1 thought on “Why Do I Keep Seeing 1155 Angel Number? (Spiritual Meanings & Symbolism)”