Skip to content
Miller's Dream & Symbolism » What Does It Mean When a Bird Poops on You? (Spiritual Meanings & Interpret) 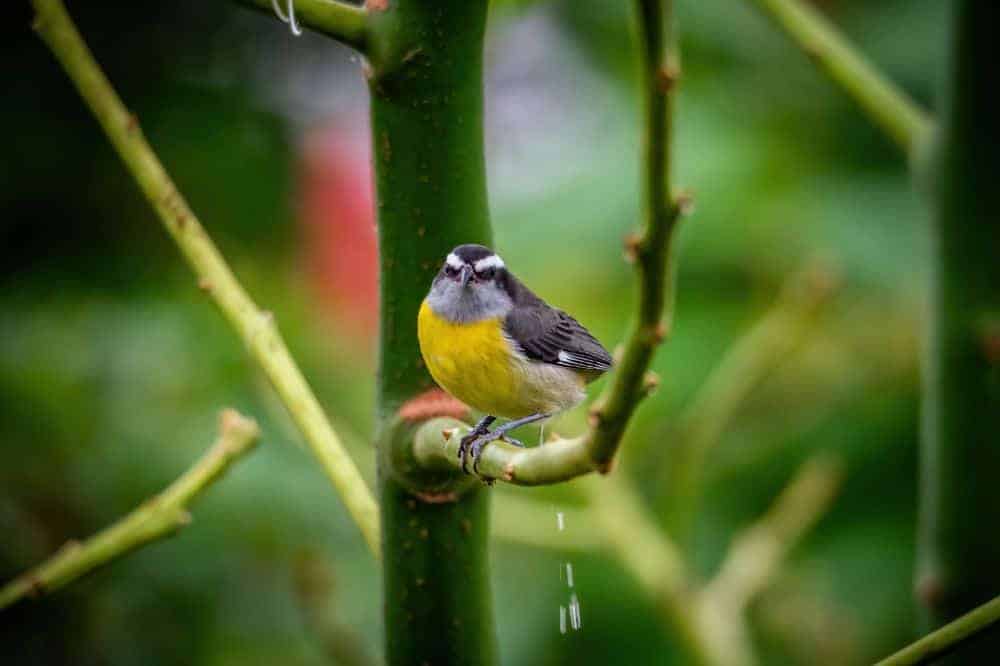 Being pooped on by a bird might not be something that most people enjoy, but in many cultures around the world, experiencing such an unwelcome event is actually seen as being very lucky.

However, interpreting this occurrence correctly can be a little more complicated than just assuming it means good luck is coming your way – so to help, in this post, we consider the question, what does it mean when a bird poops on you?

What Does It Mean When a Bird Poops on You? Luck? 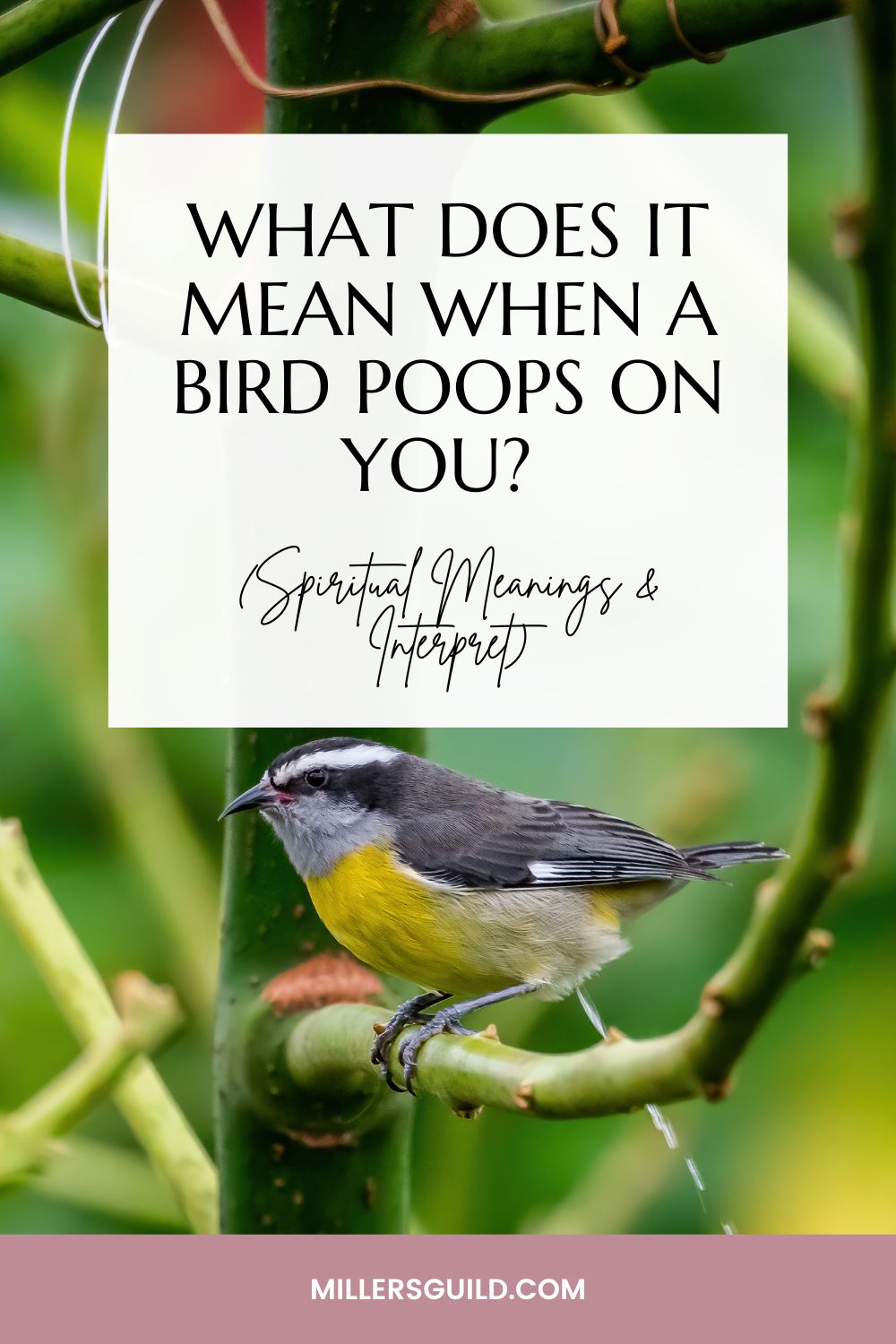 Many of the meanings related to bird poop and being pooped on by a bird are derived from the symbolism of birds themselves, so let’s take a moment to think about this first.

In many cultures, birds symbolize freedom due to their ability to fly, which give them highly positive connotations.

Since they can fly up into the sky, they are also often seen as being close to the gods, and some cultures consider them to be the messengers of the gods – which means their poop can sometimes be thought of as a divine message.

For similar reasons, they are also seen as representing a connection between our physical world and the world of the spirits, linking the two realms as they flit between them as they please.

Other associations with birds include nature, wisdom and blessings as well as courage and intelligence.

Bird poop also carries important symbolism. Since poop is essentially digested food, it can represent abundance and having plenty of food to eat.

It can symbolize good health and digestion as well as healthy bowel movements, but it also a potent fertilizer, so it can represent rebirth, growth and fertile land too.

Now let’s have a look at some of the most common ways to interpret being pooped on by a bird.

Birds have many positive associations, so a bird pooping on you is seen in many cultures as representing good luck – and this is especially true since it is such an uncommon occurrence.

In many of these places, people often rush to buy a lottery ticket after receiving such a “blessing” from a bird since they believe their chances of winning are greatly increased.

If a bird poops on your head, many people believe it is especially auspicious due to the unlikelihood of this happening, and if you are pooped on in the morning, it could be seen as a sign that you are going to have a lucky day.

However, some more skeptical people might point out that there could be an element of emotional self-defense in all of this, reflecting our tendency to change misfortune into something positive to make us feel better.

The same could be said of considering stepping in dog poop lucky.

In most cultures, being pooped on by a bird is considered lucky, but in some cultures – and in some situations – it can also be seen as being unlucky.

For example, in Hindu culture, while being pooped on by a pigeon is seen as a good omen, having a crow poop on you can signal ill health or loss.

For this reason, it can be taken as a warning to change course to avoid whatever misfortune is about to befall you.

Similarly, being pooped on at night is often thought to predict coming bad luck, especially if the bird responsible is a nocturnal species such as an owl.

This is because birds of the night are considered to bring ill fortune and are closely associated with bad luck.

As we have already mentioned, poop is associated with food, so having a bird poop on you is sometimes seen as a sign of prosperity and good health.

That said, bird excrement is inherently unhygienic, so after receiving such a message, you should clean the poop off you as quickly as possible so you don’t risk it making you sick.

Sometimes, receiving a dollop of bird poop can be a sign that you should have the courage of your convictions and that you shouldn’t give up, however hopeless things might seem – because through hard work and perseverance, you’ll get there in the end.

Many types of bird are small and not particularly powerful, but they never give up, which allows them to achieve all their goals. This means if one singles you out and poops on you, they could be reminding you to do the same.

This is especially true if you are pooped on by a hummingbird.

These tiny but eternally industrious creatures represent love, happiness and the desire to follow your dreams, so if one poops on you, it should be taken as a message from the universe to emulate these busy little birds if you want to achieve great things.

Birds are often seen as inhabiting a region between the earthly and the celestial realms. Without birds, there would be nothing to connect the two planes, and this sense of connection means they are also closely associated with relationships.

As a result, if a bird poops on you, it could be a message that you should take the time to consider the important relationships in your life.

Consider questions like these to discover whether this could be the meaning of the message you received.

The species of bird responsible for delivering the message can also be significant. For example, if you were pooped on by a dove or a pigeon, there’s a good chance the message could be related to a romantic relationship.

If you are currently single and one of these birds poops on you, it may tell you that you are about to enter into a new and passionate relationship.

On the other hand, if you are already in a relationship, the message may predict the relationship is about to enter a new and more intense phase.

Bird poop might be unpleasant and unhygienic, but it’s also full of nutrients that can help plants grow. For this reason, if a bird chooses you to poop on, it could be a message related to your spiritual growth and enlightenment.

This is why being pooped on may be related to your spiritual development – and it may also represent a chance for spiritual renewal and rebirth as long as you give enough nourishment to the spiritual side of your being.

Alternatively, the bird poop could be an indication that you are about to undergo significant spiritual growth or experience spiritual enlightenment, even if you are not aware of it yet.

Also related to poop and its association with renewal and rebirth is the possibility that being pooped on by a bird could signify transformation, change or renewal in the physical world.

Being pooped on might not seem like such a positive experience at the time, but later we may realize the fortune and good luck it brings.

Similarly, it can also represent the chance to take something negative in our lives and turn it into something positive.

Perhaps you have just been fired from your job or have just ended a relationship – however, with all endings come opportunities and new beginnings, and if you have recently experienced something like this, being pooped on could be a reminder to look for the positives.

How to interpret a bird pooping on you

As we have seen, there are many ways to interpret a bird pooping on you, so how can you tell which message is being conveyed to you?

First, you should think about your current life situation and the challenges and difficulties you are facing. What are your most pressing preoccupations and what answers could the message be intended to bring?

Next, think about any other messages that you may have been receiving recently like seeing numbers repeated in your daily life or messages in dreams.

Messages like angel numbers or the symbolism of dreams can provide other clues that will guide you to the meaning you are searching for.

Then, through deep thought and meditation, consider how all the messages you are receiving reinforce each other and how they apply to your life and what you are going through – and in this way, your instinct and intuition will help you understand what you are being told.

Many nuances and possible interpretations

As we have seen, many cultures believe that although it’s an unpleasant experience, in most cases, being pooped on by a bird is a positive sign for the future.

In order to discover the correct meaning of what happened, consider the different possibilities we have outlined here and the different nuances, and by following your intuition, you will be able to discover what the bird pooping on you might mean for your future.