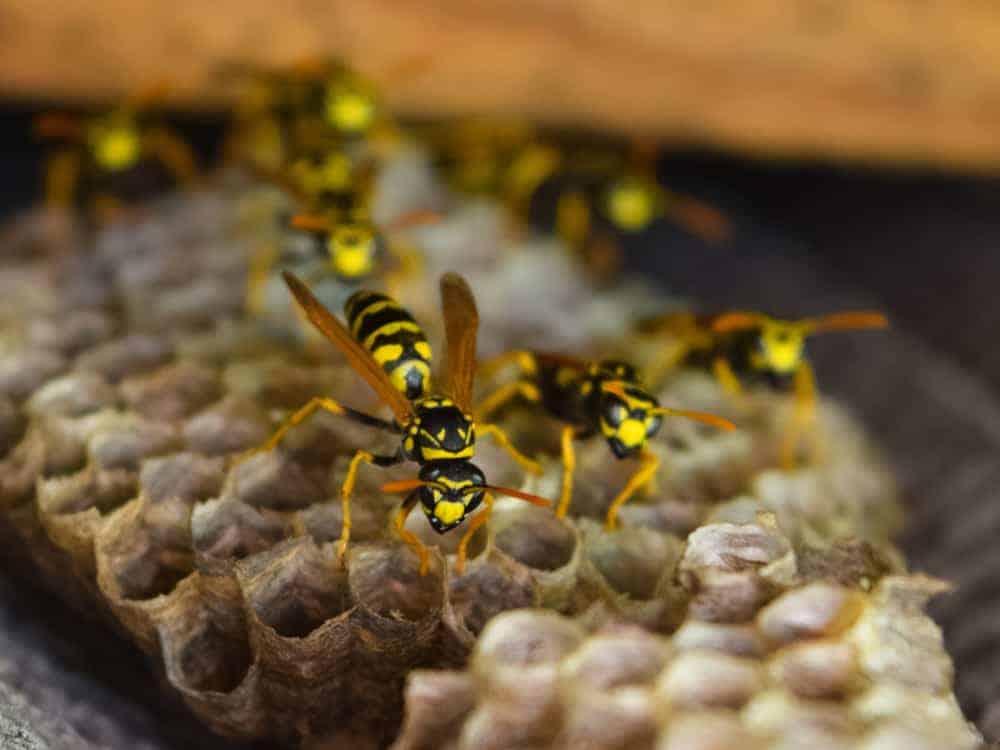 Are you planning to get a wasp tattoed? No doubt, this creature makes an attractive and unique tattoo. However, it is imperative to know what wasps spiritually symbolize before you take the critical step of inking this insect on your body, isn’t it?

Likewise, some of you might have simply dreamt of a wasp, and now you are wondering what message the universe is trying to convey to you.

Either way, you’re at the right place! Read on to find out 4 wasp symbolism. What’s more, later down the post, you’ll also find out what wasps symbolize in various cultures and religions! 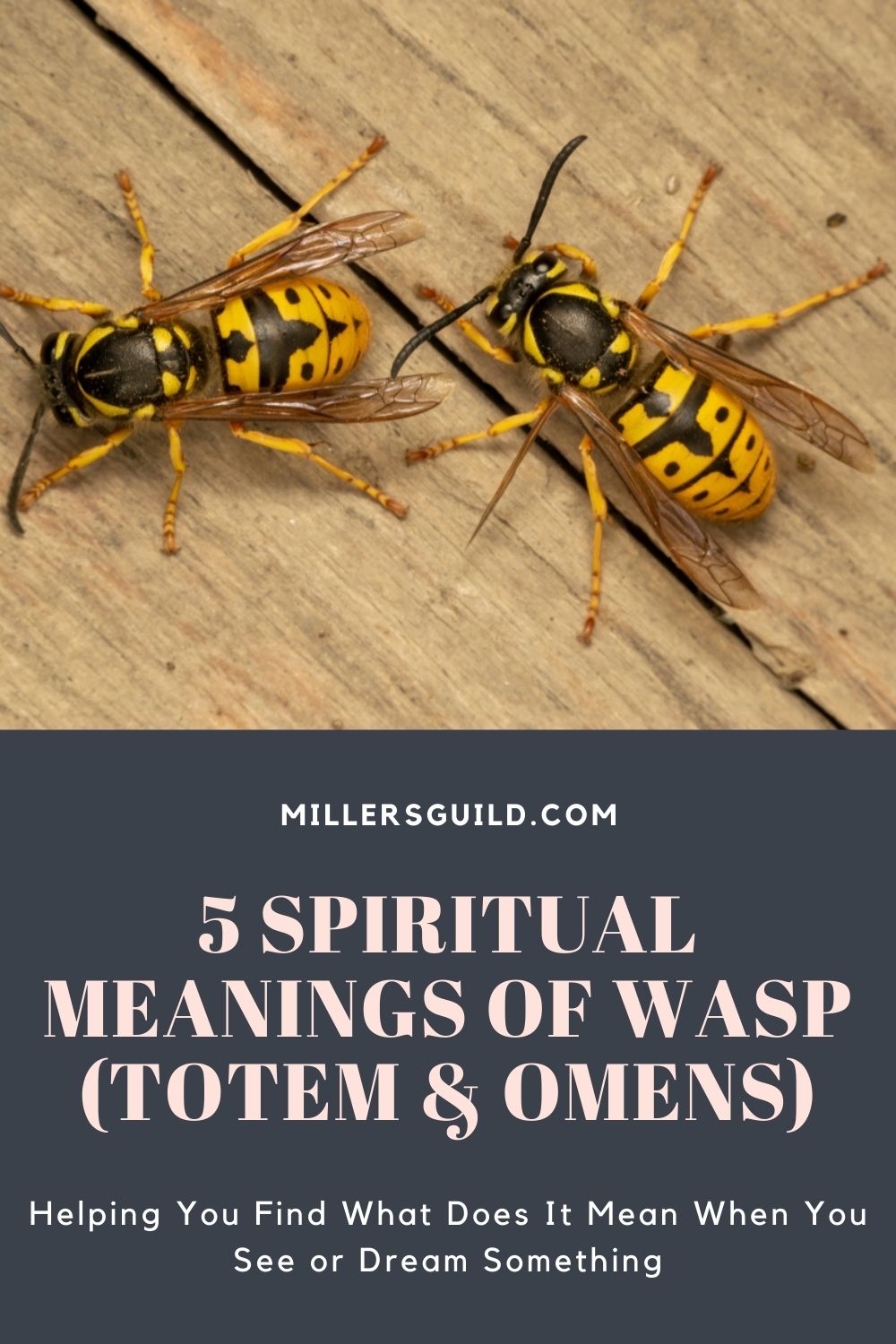 What Do Wasps Symbolize?

Whenever you feel paralyzed by the fear of failures, wasp spirit animals motivate you to muster the courage to believe in yourself. At times you feel low and demotivated, or when you feel unsure about your decisions, spotting a wasp helps you be more confident in yourself.

In some cultures, wasps are revered for their role in pollination. Unlike bees, wasps aren’t covered in hairs and thus, are even more efficient pollinators than bees are. Therefore, they are symbolized for their fertility power. Moreover, wasps play a role in paralyzing annoying insects that hampers horticulture.

Wasps tackle the challenges they face in life and never give up. Though tiny, they overcome every problem, therefore, motivating humans to take charge of their lives and strive to pursue their hearts and minds.

In African cultures, many believe that wasps persuade humans to steer the ship of their lives as per their way.

Wasps are praised for the role they play in wine fermentations. In case you didn’t know, these wasps carry yeast cells, called Saccharomyces cerevisiae or Brewer’s yeast, on their gut and pass them to their offspring.

These tiny friends and their young ones go on to nibble sweat grapes late in the season and pass some of these cells, which aids the process of wine fermentations.

Moreover, there are some Native American Indian mythologies that celebrate wasps as the symbol of order and productivity.

Wasp spirit animals symbolize new beginnings as they motivate humans to bring about positive changes in their lives. Even if things are going fine with you, wasps tell you that you have so much more potential, and it is high time you realize it. 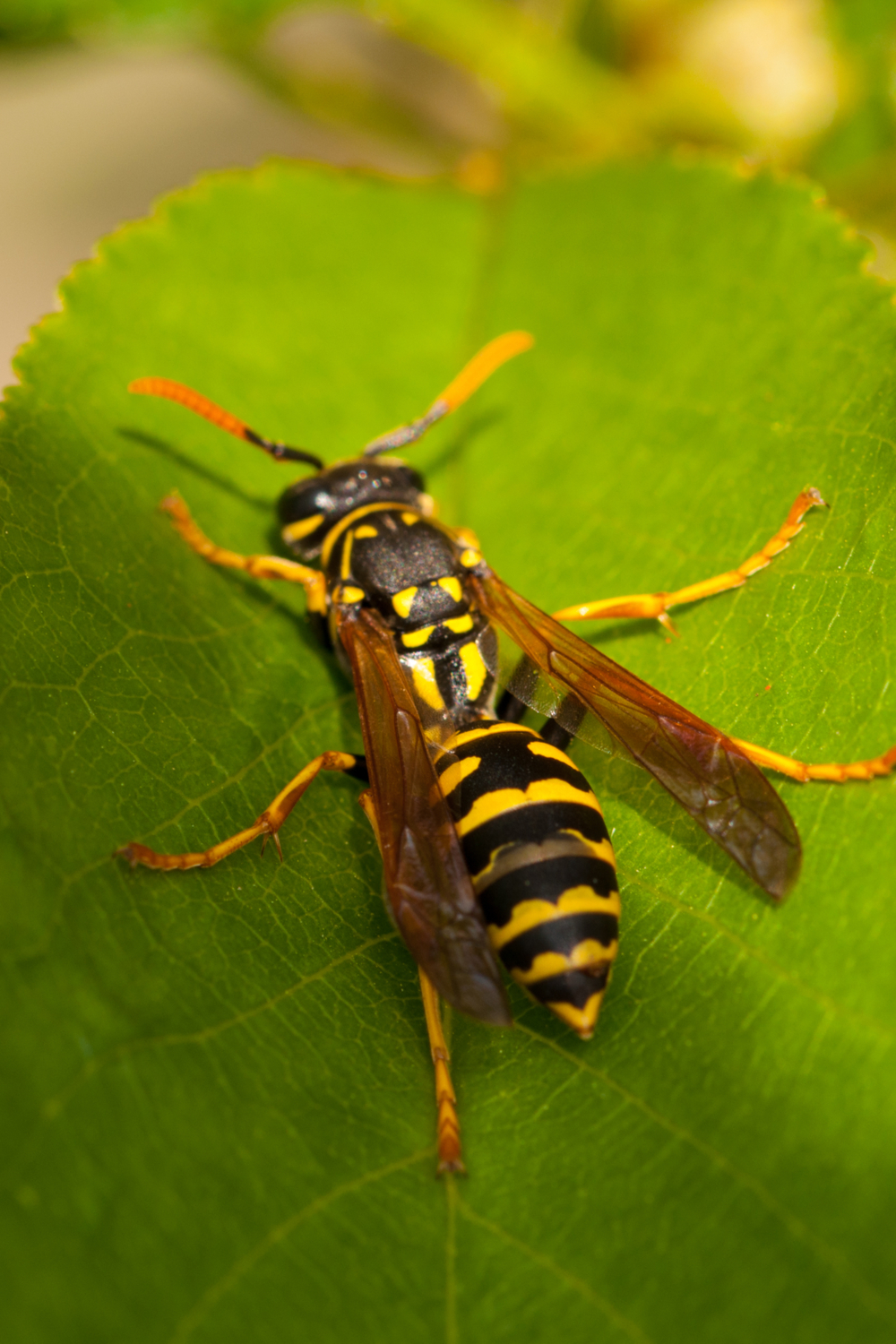 Among many Native American tribes, a wasp symbolizes productivity and organization. Many even believed wasps to be the creator of the Earth. The Choctaw tribe legends imply that the venom of wasps as well as the snakes were created from a magical plant.

In Egypt, a wasp is associated with the Goddess Ahti. Ahti had the head of the wasp, but her body was of a Hippo. Egyptian mythologies and legends talk little about this Goddess and mention her as spiteful as she had an unbelievable temper.

A revered Hindu Goddess Brahmari, the Goddess of black bees, is associated with bees, wasps, and hornets. Consequently, wasps are sacred to Hindus.

In the Bible, wasps are represented as holy warriors of Gods who were sent in swarms to punish sinister souls. Therefore, wasps are sacred in Christianity in terms of how they are sent as a warning to keep evil humans in check.

Those under wasp spirit animals are socially forward and expressive. They’re charming and are quick to make friends. At the same time, you equally enjoy your own company.

If you have a wasp spirit animal, you’re ambitious. Once you set your eyes on the prize, you don’t let anything or anybody stand in your way.

You believe in autonomy and independence. While it is a good trait, you detach yourself from others quite quickly. You don’t believe in commitments, and your mercuric behavior might result in relationship issues.

When To Call On Your Wasp Spirit Animal? 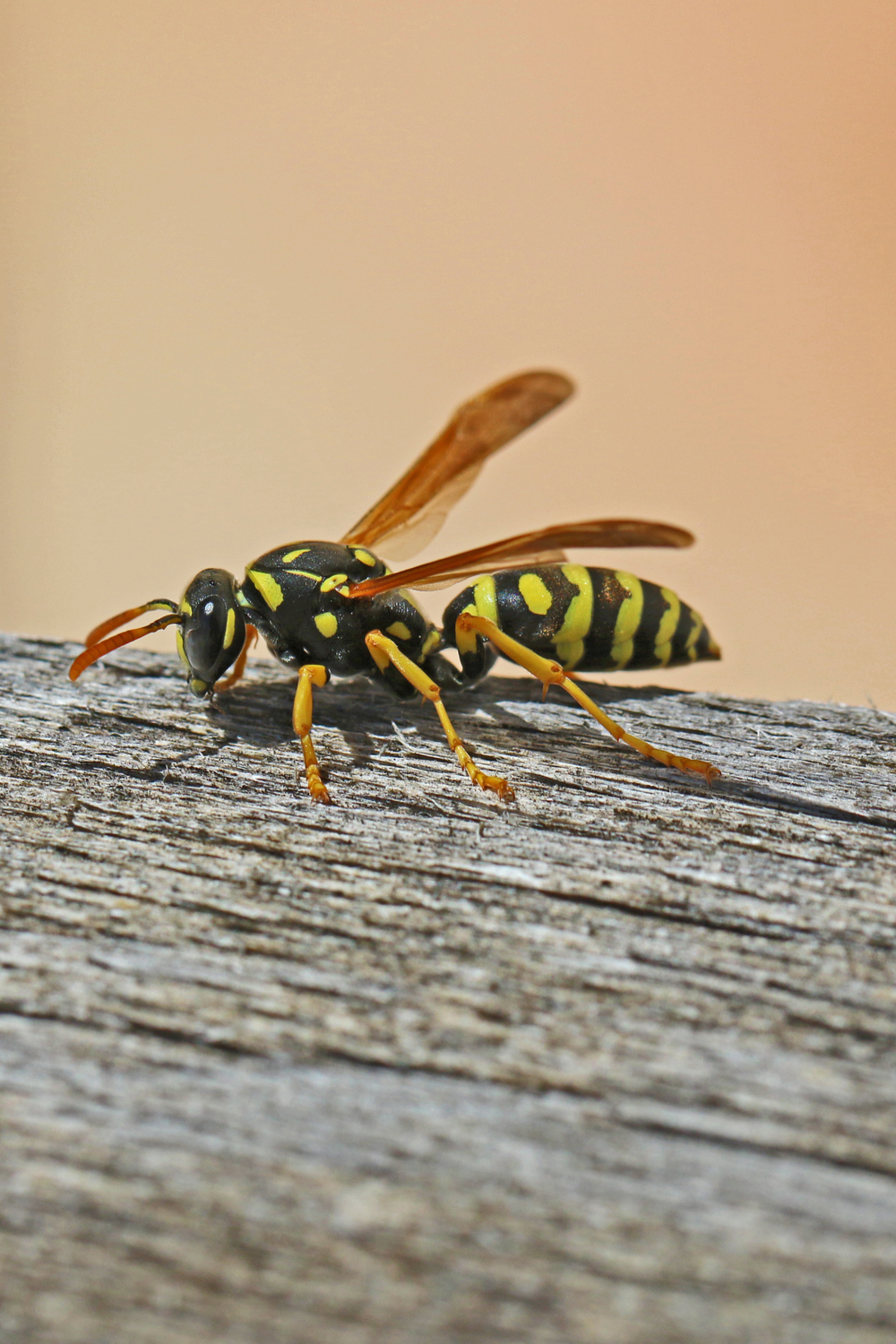 Do you lately feel impatient? You might probably be feeling like everyone else is getting ahead of you. Nevertheless, it would be best if you remembered that it takes time and dedication to achieve your dreams. Your wasp spirit animal can help you become more patient.

Likewise, if you’re lately spending too much time dreaming and little to no time putting effort into converting your dreams into reality, wasp spirit animals give the little nudge of motivations required for you to take action.

Furthermore, if you need help to find out your hidden talents and unleash your hidden potential, wasp spirit animals make the perfect guides.

While encountering a wasp is a good omen, an omen that indicates betterment of your professional as well as personal life, being stung by a wasp, on the other hand, is a bad sign. You’ll probably be bombarded with unwelcomed changes in your life.

Also, never kill a wasp upon encounter, as it is considered ominous. Also, the likelihood of you being under a swarm attack is pretty high after killing a wasp. 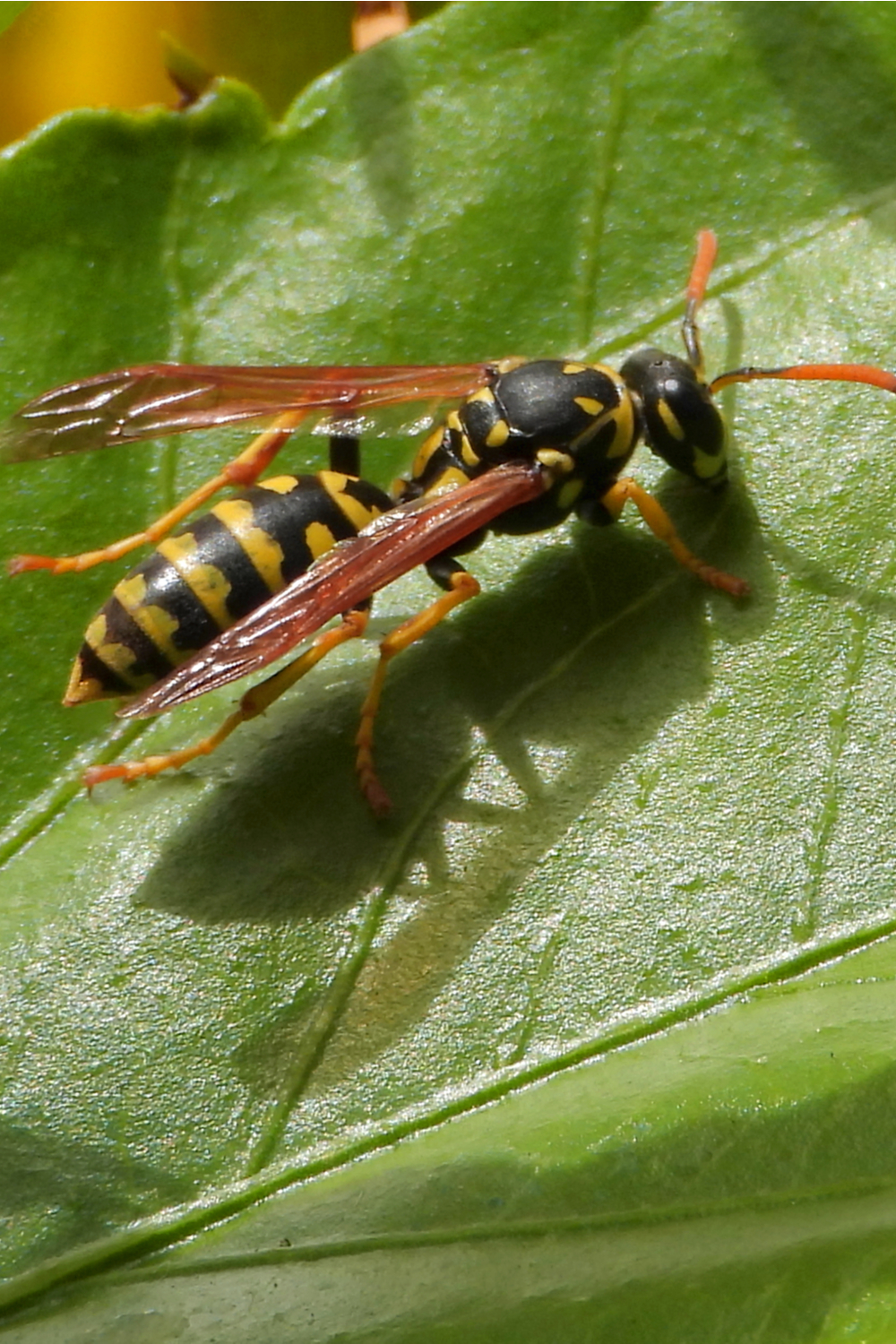 In general, dreams about wasps can be a sign that you’re being taken advantage of in your waking life. This dream is further associated with troubles, conflicts, pain, and temptation. Seeing a wasp in your dream might be an indication that you wish ill to your enemies.

2.   Dreaming about a wasp in your house:

Luckily, dreaming of these creatures in your house is a good omen. It is a harbinger of good news and is a sign of positive improvements in your waking life.

What’s more, if you were able to kill your wasps in the house, it further represents contentment and merriment. The spiritual meaning of dead wasps is considered a good one. Nevertheless, according to some superstitions, dead wasps mean bad luck.

In contrast, if you couldn’t chase away wasp from your home, it is a sign of a possible feud with someone in the near future.

3.   Dreaming about being stung by a wasp:

Being stung by a wasp in your dream is associated with negative energy and feelings such as envy, jealousy, or work-life issues. You probably have made foes in your professional life. This dream further suggests the possibility of you feeling lonely.

You might separate from someone dear to you or grow apart in a relationship. There’s a possibility of physical distance between you and the one you adore as well.

4.   Dreaming about crushing a wasp:

Dreams about crushing a wasp can be interpreted in various ways. Firstly, to couples, the wasp represents their partner. And to crush the wasp within seconds is that you might fight or break up with your partner in your waking life.

Your so-called friends and people surrounding you are busy planting the seeds of rumors that downgrades your hard-built reputation. So, be wary of whom you choose to entrust.

5.   Dreaming about a swarm of wasps:

If you dreamt of a swarm of wasps, it is an extraordinary omen. It indicates success, acknowledgment, and appreciation in your professional life. Trust us, the chances of your boss handing you a promotion letter are pretty high.

There are probably a few colleagues who envy your progress and don’t wish well for you, but their intentions and action will not stop you from getting what you deserve.

Dreams about wasp nests have multiple interpretations. Firstly, if you are recurrently dreaming of this plot, it is time you take a closer look at how people are treating you. Do you feel ignored and disrespected? If yes, you need to stand up for yourself.

Secondly, dreaming of a wasp nest is a sign that whatever step you’re planning next in life, make sure the groundworks are done right and the foundation is built great. This dream can also portend a potential loss. So, hold tight of things and people who hold most dear to you.

Finally, if the wasp nest was empty in the dream, it represents pent-up aggression and unnecessary hostility towards others. It would be great if you could take some time for yourself and sort out your emotions.

7.   Dreaming about catching a wasp:

Did you catch the wasp in your dream? If yes, well, congratulations! It is an excellent omen. Catching a waps in your dream is a sign of a prosperous time ahead filled with great opportunity.

Be ready to grasp opportunities at the right time to make the most out of such a fruitful period of your life. Furthermore, if your life has been troublesome lately, you’ll soon be able to figure out solutions to your waking life problems will little to no effort.

We believe this post will provide you with enough insight into wasp symbolism. In short, wasps symbolize productivity, courage, fertility, taking control, and new beginnings.

If you’d like to know more about was symbolisms, wasp spirit animals, or wasp spiritual dream meanings, we’d love to interact with you! 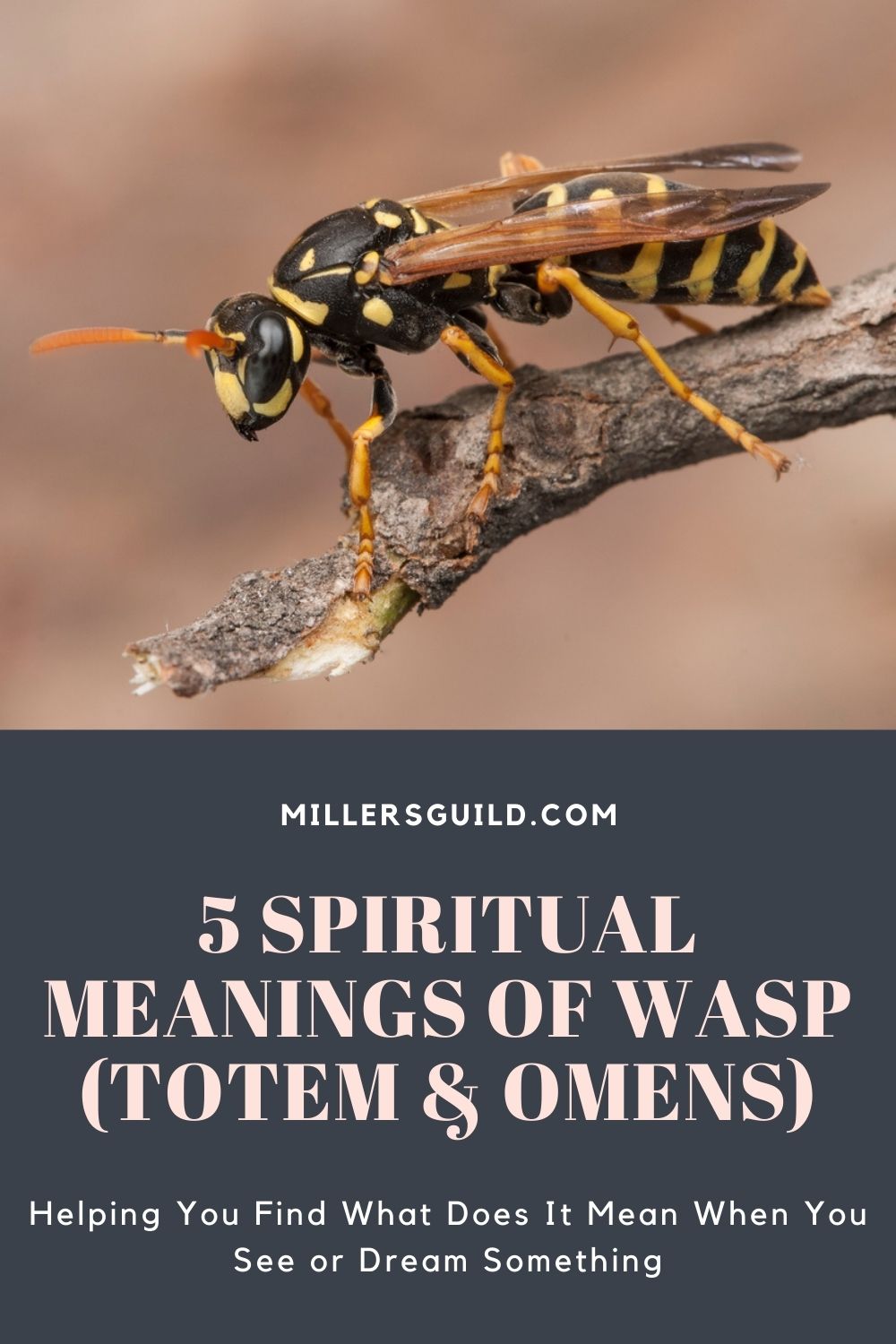