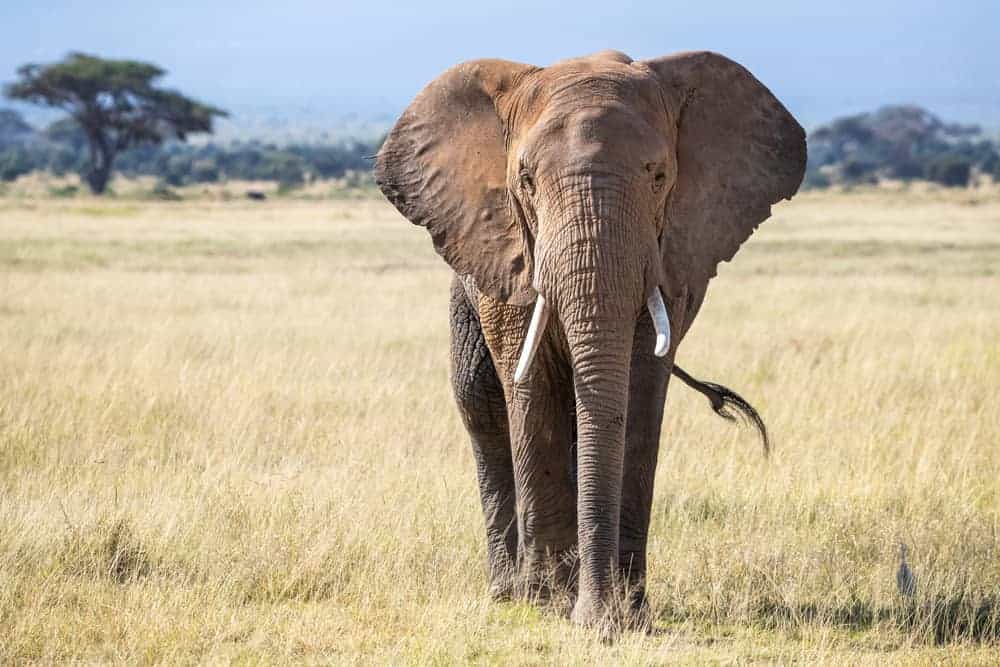 Elephants are majestic creatures that are hugely impressive to anyone who gets near them, and they also occupy an important place in the traditions of many of the people who live and work with them.

In this post, we discuss elephant symbolism and what elephants mean to people in different parts of the world – as well as talking about what it means if you see an elephant in a dream. 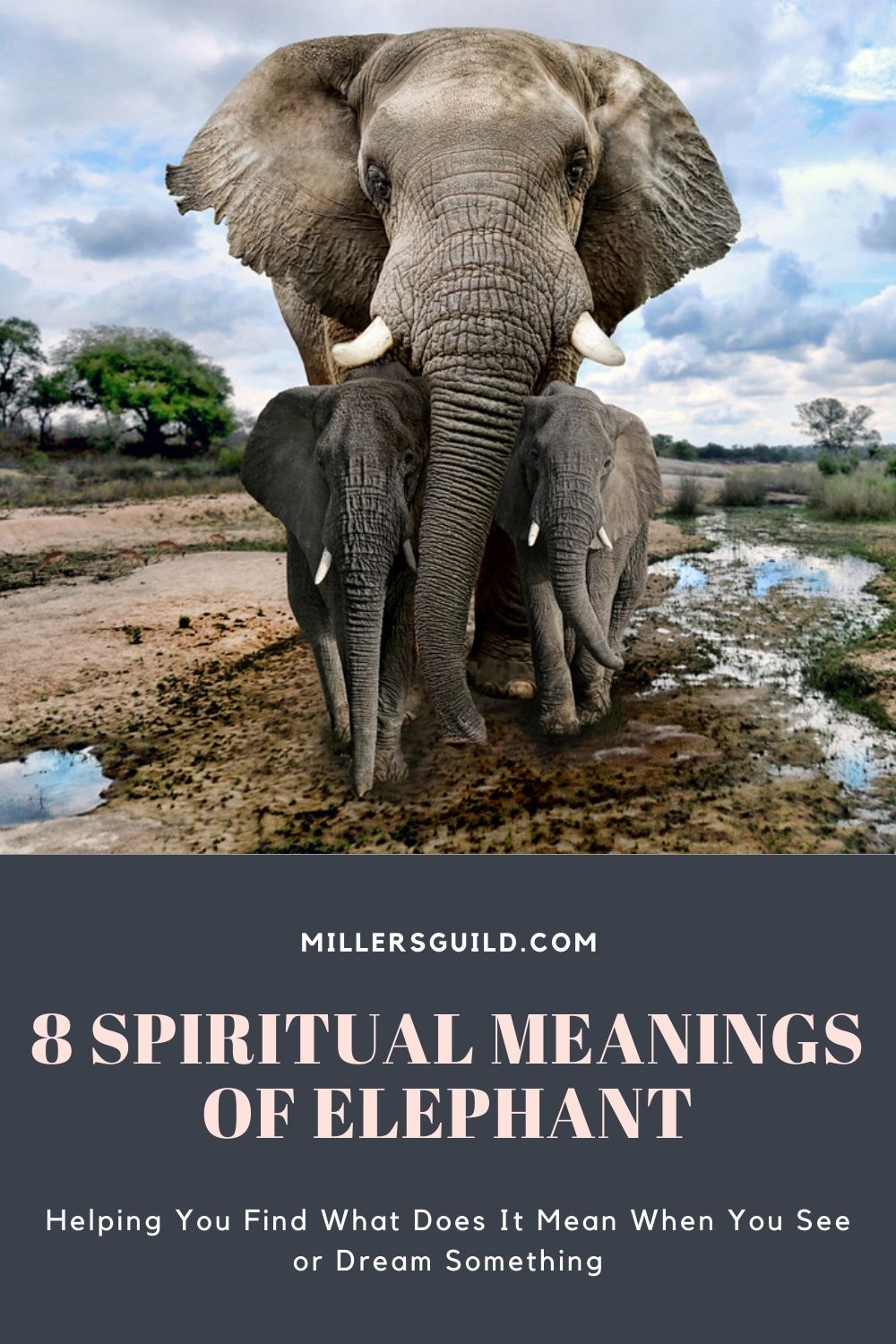 Before we look at the symbolism of elephants in various cultures, let’s think about their characteristics and the associations we have with them.

Probably the first thing you think of when you imagine an elephant is their huge size. African elephants are the largest living land animals in the world, and their Asian cousins aren’t far behind.

For this reason, we associate elephants with immense strength and power, which they can use to knock down trees or protect their herd from threats.

This gives rise to the impression we have of them that are able to break through obstacles and anything that is standing in their way, and their fierce loyalty to their family means we also associate them with strong family bonds and devotion to one’s loved ones.

Elephants are extremely intelligent and are known to have exceptional memories – which is why we have the saying “an elephant never forgets”. They can live as long as 70 years, and such a long life of accumulated experience represents great wisdom.

As we will see, white elephants especially are sacred to a number of cultures and religions. However, we also use the expression “white elephant” to refer to something expensive and useless, a waste of resources or funds.

Due to their imposing bulk, when we talk about an “elephant in the room”, it refers to a large problem that everybody is doing their best to ignore and pretend doesn’t exist.

Now let’s look at how these characteristics have translated into symbolism according to the various peoples who live alongside these wonderful beasts. 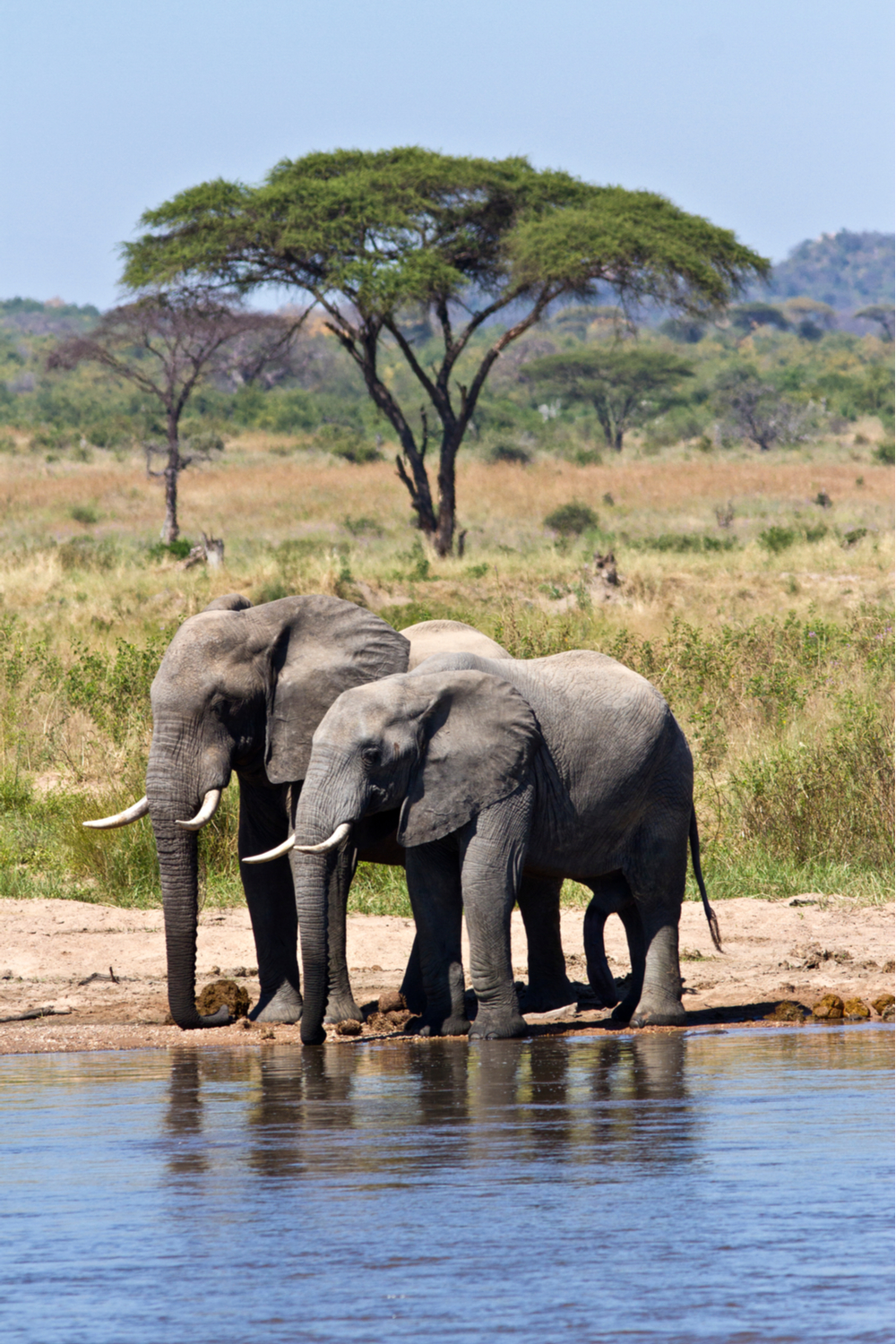 Elephants are native to Africa and Asia, and they have had a profound effect on the culture of many of peoples who live in areas where they roam – especially in Asia. Here are some examples of what elephants symbolize:

There are many and varied beliefs about elephants from different parts of Africa.

For example, the Mbuti people of Central Africa believe that the souls of their ancestors reside in elephants after their death, whereas in other areas, people believe that their departed chiefs are reincarnated as elephants.

In the Kingdom of Dahomey in Benin, elephants are associated with Guezo and his son Glele, two former rulers.

In general, people in Africa tend to see elephants as symbolizing power as well as royal qualities.

The elephant is an important and powerful symbol in Indian Hindu culture.

One of the most important Hindu gods is Ganesha, who is always depicted as having a human body with the head of an elephant. Ganesha is revered as a god who can bring good luck as well as one who can remove obstacles, much like an elephant flattening trees in a forest.

Another of Hinduism’s most important deities is Indra, the god of war and monsoons, who is often seen being carried by a white elephant named Airavata.

Since Airavata can fly, they are often depicted in the sky together surrounded by clouds, and for this reason, the elephant has a strong association with rain.

Elephants’ strength, wisdom and holiness are also revered, and live elephants are often seen in temples, especially in southern parts of India, where they are used during rituals.

The spiritual and physical strength of elephants was also valued in China, and the emperor had statues of elephants positioned on the route leading to the imperial palace. For this reason, they came to symbolize royalty.

In Chinese feng shui, the image of an elephant with an upturned trunk symbolizes positive energy being showered upon a home, making it an auspicious motif to use for decoration.

Sometimes, elephant statues also represented fertility, and it was believed that childless women who placed stones on the back of the statues of elephants would be blessed with a son.

Elephants are an extremely important symbol in various parts of Southeast Asia, including Thailand, Laos, Myanmar and Cambodia.

In the past, elephants were ridden into battle and represented power, strength and royalty.

The white elephant was particularly revered and appears many times in Southeast Asian mythology. They are considered sacred and bring good luck. White elephants are also a symbol of royalty.

Many years ago, the precursor to the modern country of Laos was known as Lan Xang, which can be translated as the “Land of a Million Elephants”.

In Thailand, even today, elephants are still an important symbol to Thais, so much so that one of the country’s most popular beers is called Chang – “Chang” is the Thai word for elephant, and the elephant motif appears on the bottle as the symbol for the beer.

A local beer in Cambodia is also sold under the Khmer name for elephant, again emphasizing how important the symbol of the elephant is to the people of the region.

In Sumatra, an island of Indonesia, elephants were associated with lightning.

Elephants haven’t roamed free in Europe for thousands of years, but the Ancient Romans imported them and kept them as pets and for other uses – they can be seen depicted fairly accurately in existing mosaics from the period.

The Romans also believed that elephants were religious creatures and that they worshipped the stars.

It is told that one night, while she was pregnant with Siddhartha (the child who later become the Buddha), Queen Maya dreamed that a white elephant brought her a lotus flower. This foretold of the special role her child would go on to have.

In Buddhism, white is also seen as the color of purity, holiness and enlightenment.

The prophet Muhammed is believed to have been born in the year 570 CE, which was the year of the elephant.

A white elephant also appears in an Islamic legend. When a king of Yemen attempted to ride into Mecca to destroy the Kaaba, he was thwarted by his elephant when it refused to enter the holy Islamic city.

The meaning of seeing elephants in dreams 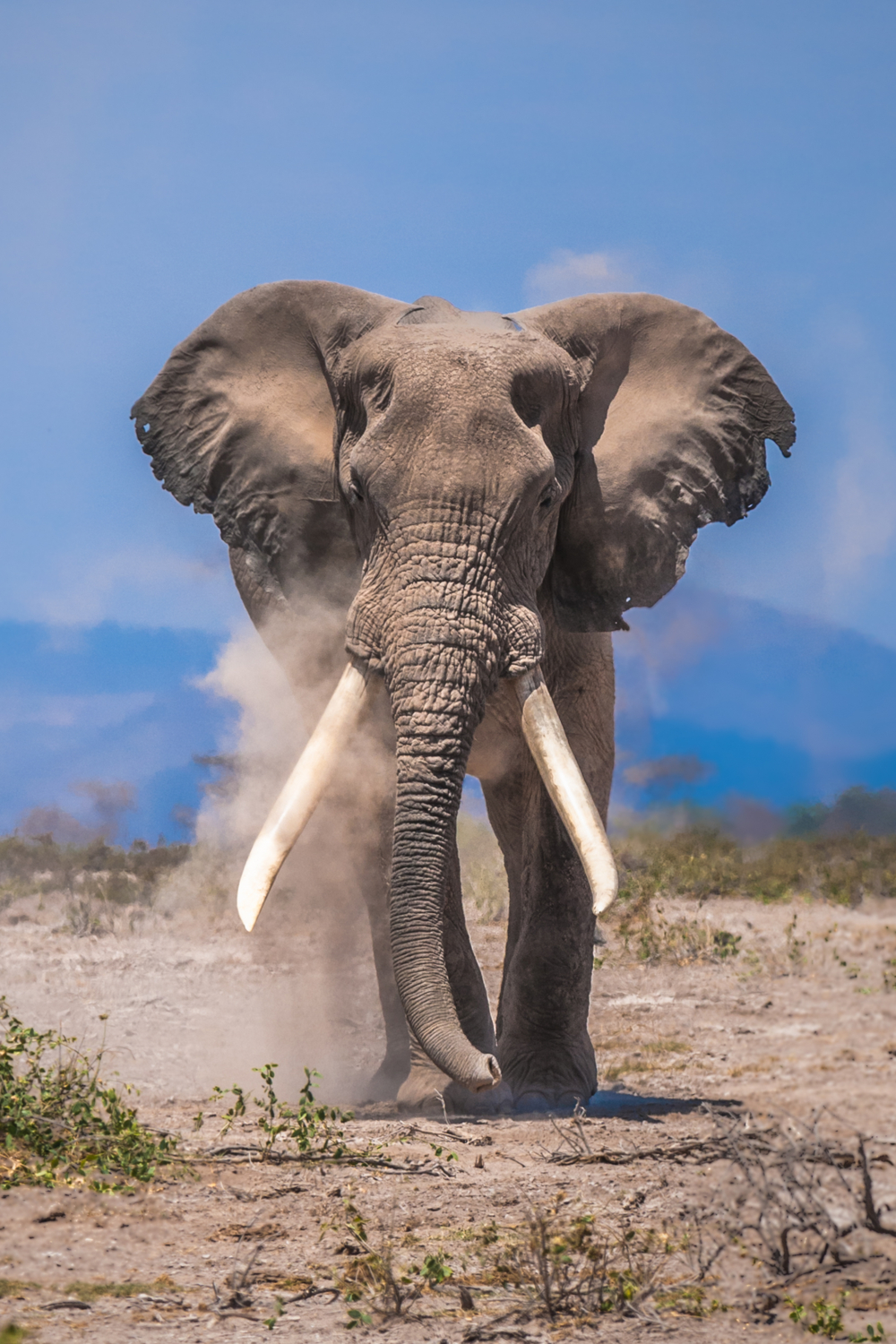 Although in many parts of the world, you are extremely unlikely to come across an elephant in your daily life unless you go to a zoo, elephants may appear to you in dreams, and when they do, they may represent an important message that is being sent to you.

This means it is important to understand how to interpret seeing an elephant in a dream to find out what it means to you.

To do this, you need to consider what happened in the dream and how you felt. You also need to think about the challenges and issues you are currently experiencing in your life to see how this message relates specifically to you.

Here are some of the most common interpretations of seeing an elephant in your dream.

In many cultures, the elephant is a symbol of good luck, and the simplest interpretation of dreaming of an elephant is that good luck is on its way to you too.

Elephants are almost always a positive animal to see since they represent so many positive qualities – so if you see one in a dream, it is likely that it predicts good news.

2. Use your intelligence to tackle a problem

As we have seen, elephants are highly intelligent creatures with excellent memories that give them great wisdom, so seeing an elephant in a dream may be a reminder to use your intellect rather than your emotions when facing a difficult problem.

When we are emotional, we can make bad decisions, but if we are calm and rational, we are better able to think things through, and seeing an elephant in a dream can tell us to use this kind of approach.

Are you facing any difficult problems at the moment? Especially ones that make you feel emotional? In this case, the dream is probably telling you to put your emotions to one side and deal with the situation with a cool head.

With their immense strength and bulk, elephants can walk through almost anything that stands in their way.

Even the Hindu god Ganesha was known as a god who could help remove obstacles, so dreaming of an elephant may have something to do with this.

What obstacles are you facing at the moment? What is preventing you from achieving your goals? And how can you clear these obstacles?

Taking time to identify the obstacles that prevent you from succeeding in something is the first step in overcoming them, so a dream of elephants may be telling you to work out how to clear obstacles from your path.

Elephants are also associated with fertility, so your dream could have something to do with this.

Perhaps you are trying to have children but so far without success. In this case, dreaming of an elephant may be a sign of encouragement to keep trying since you will be successful soon.

Elephants are known to fight fiercely to protect their young and the rest of the herd, so an elephant dream may represent this aspect of elephant symbolism.

Is your family under threat? Do you need to do more to protect them? Are they in danger of coming to harm somehow?

This can be an important message to receive, so take the time to think deeply to try to understand what the message could be.

As well as doing everything they can to protect their families, elephants are extremely devoted and loyal to the herd.

Does this mean your dream is telling you to follow the elephant’s example and show more loyalty to your friends and family? Or is it a reminder of how devoted to you your loved ones are?

Again, search deeply inside yourself for the answers and your instincts and intuition will guide you to the right answers.

Sometimes, elephants can be highly territorial and won’t allow intruders to invade their personal space. This means if you dream of an elephant, you may need to re-evaluate the boundaries you have set for other people and whether they are being respected.

What was the elephant in your dream doing? Would it let you approach it? If not, this could be a clear indication that this was a dream about boundaries.

8. Use your wisdom to make the most of the present

Wisdom comes from experience, and with their long lives and exceptional memories, elephants amass a great deal of wisdom.

However, that wisdom is wasted if it isn’t used to improve the present and the future, so dreaming of an elephant may be a message that you should make the most of the present rather than dwelling on the past.

Do you spend more time thinking about better times that have been and gone? Then this dream could mean you need to be more positive about the present to make the best of your current situation and improve your future prospects.

Most often a positive symbol wherever it is encountered

Most of the time, elephants are seen as a positive symbol, and they are revered by many of the people who live side by side with them.

If you see an elephant in your dream, it is also usually a good sign, and by thinking deeply about your dream and trusting your intuition, you will be able to find out what the true meaning of your dream could be. 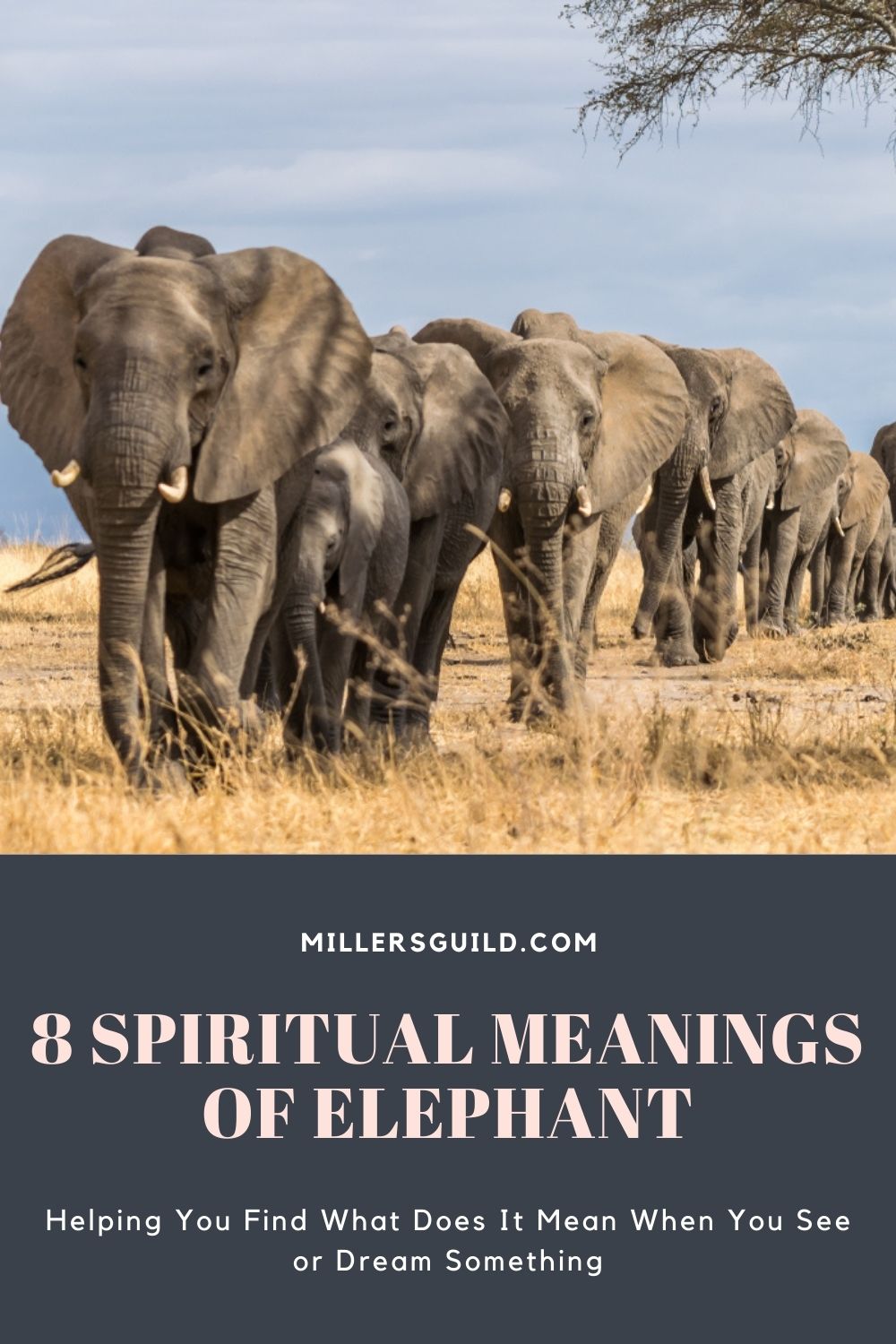